Since it bowed, Mazda has always said all of its products have “the soul of a sportscar”. And that soul can nowhere better be found than in the MX-5 GS Sport.

This has got to be some kind of record.

Every year since the Mazda MX-5 Miata roadster debuted in 1989 as a 1990 model, I’ve driven a new model each and every year for 27 straight years.

I find this one little car is what “motoring” is all about.

With just enough power to have fun but not enough to get you in trouble, the MX-5 as Mazda likes to call it (but the Miata as it always will be to me), satisfies the senses while being attainable by the masses.

To a dwindling number of readers/viewers names such as MGA/MGB, Triumph TR 3/4/6, Spitfire and Austin-Healey or Sunbeam are just a memory.

But I have to tell you, owning a two-seater in the middle of the last century was more than just owning a car.

In a world of frumpy domestic sedans and wagons, and later lurid muscle cars that always seemed just plain stupid to me, heading out around midnight in my Sunbeam Alpine with the stars all aglow above me and driving Essex County – that was something I cherish to this day.

And I don’t know how many times over the last 26 years I’ve done the same thing in a Miata.

I have a colleague who recently bought a used Miata as a treat to himself. Often at night, he too slips out to the garage and just takes off for an hour or two.

The first one I ever drove was the original 1990 model in French Mariner Blue paint and mock Minilight 13-inch wheels. 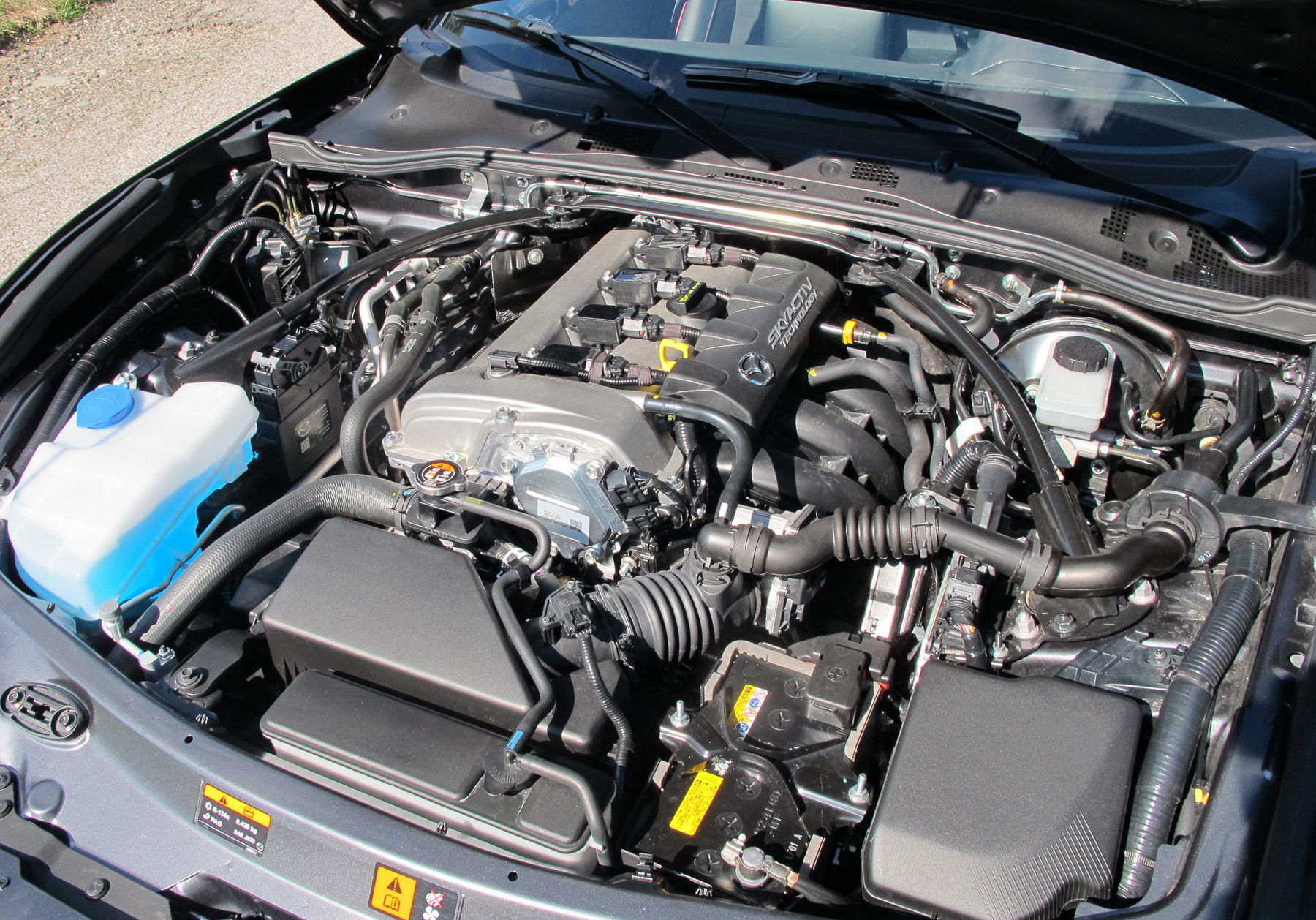 Engine for the rear-drive MX-5 is a 2.0-litre twincam, inline four-cylinder with 155 hp and 148 lb/ft of torque. A six-speed manual transmission is standard with a six-speed automatic as a no-charge option.

To this day, no vehicle I’ve ever driven has gotten the reaction of that first Miata.

Kids screaming “great car” or other motorists given the hi-sign or people just walking up to admire off the street, the Miata hit a sweet spot.

And it also hit a sweet spot with consumers — being officially the largest selling sportscar in history.

That first Miata was powered by a meager 1.6-litre inline twin-cam four-cylinder with just 115 hp and 100 lb/ft of torque.

That was replaced early one by a twincam 2.0-litre inline four-cylinder, which today benefits from Mazda’s fuel saving Skyactiv technology for 155 hp and 148 lb/ft of torque driving the real wheels through a standard six-speed manual or optional six-speed automatic transmission. 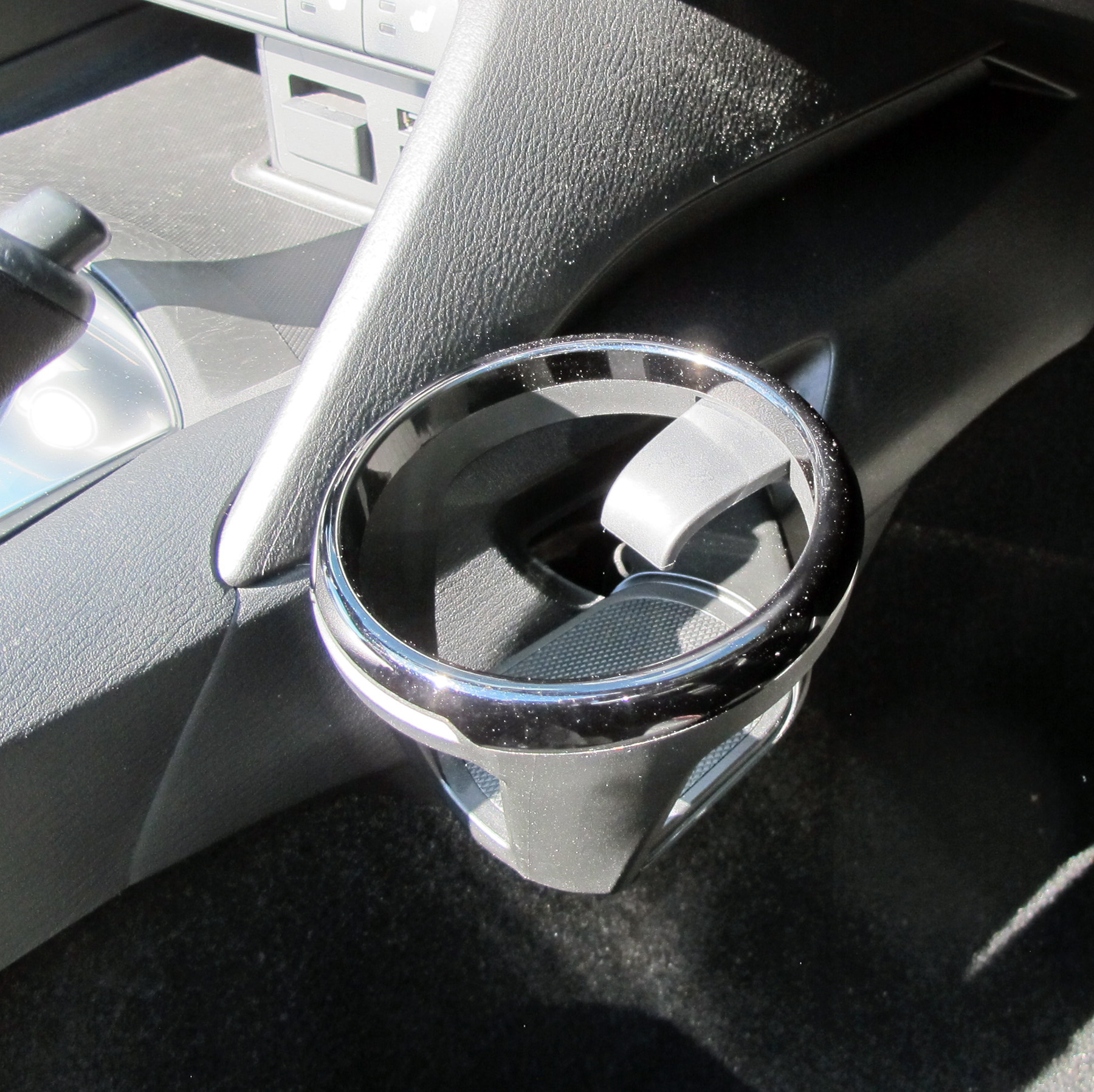 Cabin room is scarce on the MX-5 but Mazda has found a way to add cupholders (passenger’s shown) for coffee lovers.

Tested here is perhaps the most desirable model, the mid-trim GS trim with the Sport Package. 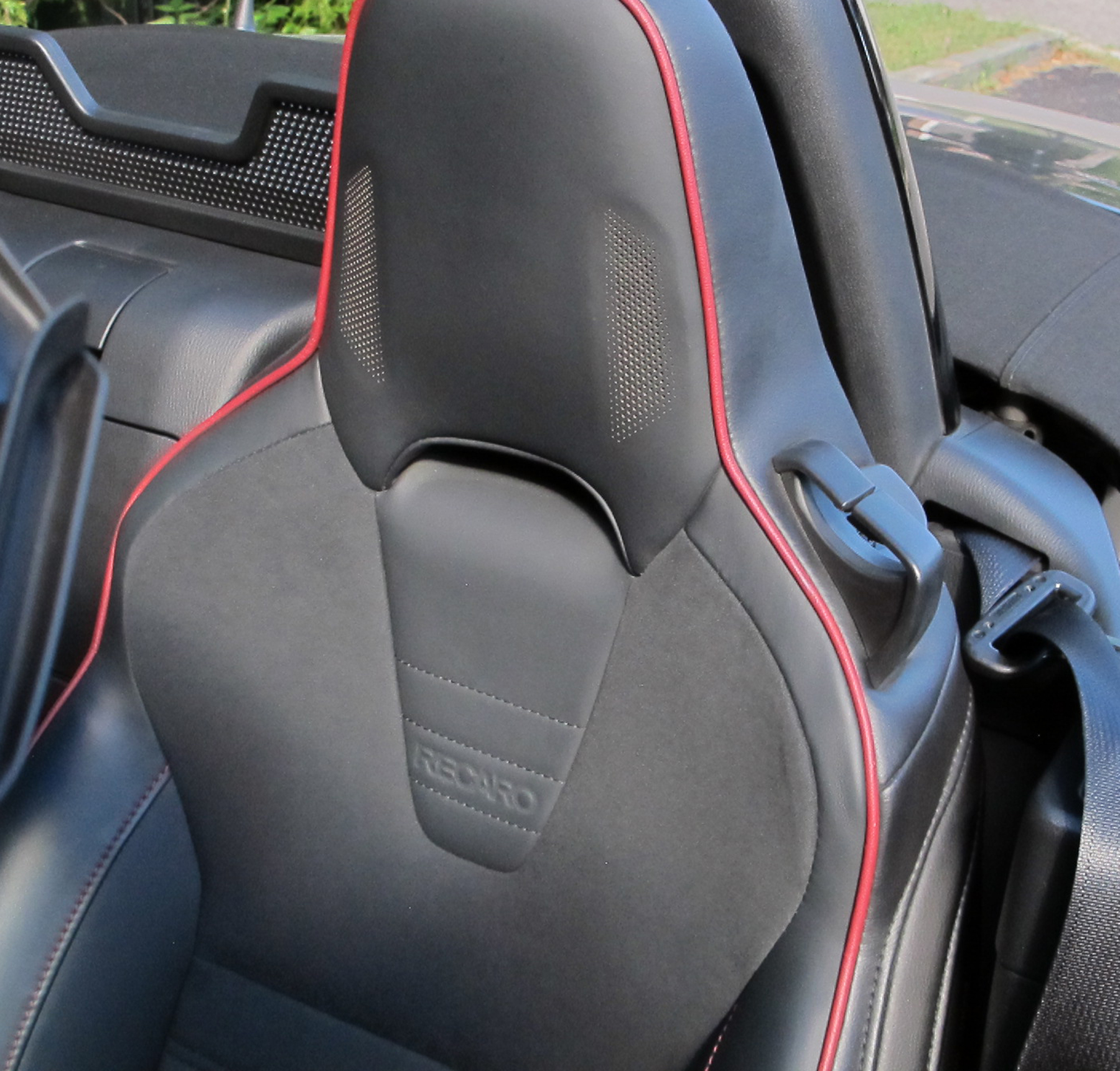 Opt for the $4,400 Sport Package and just one of the goodies are heated Recaro seats in leather and Alcantara trimmed with twin speakers in each headrest.

In short, the Sport comes fully loaded and ready to go, which is just what I did for a week.

I think I travelled more than 1,000 km with the top down all the way over a variety of roads from super highways to cottage lanes.

Closing the manual top is just a matter of reaching behind you and pulling forward until the centre clasp engages and then all you need is to clamp it shut.

The six-speed manual is a treat, with spring loading making the next shift up or down a snap. You can tell the clutch loading has been tuned and honed by Mazda engineers who I personally know love working on this car.

And then there are the lines. 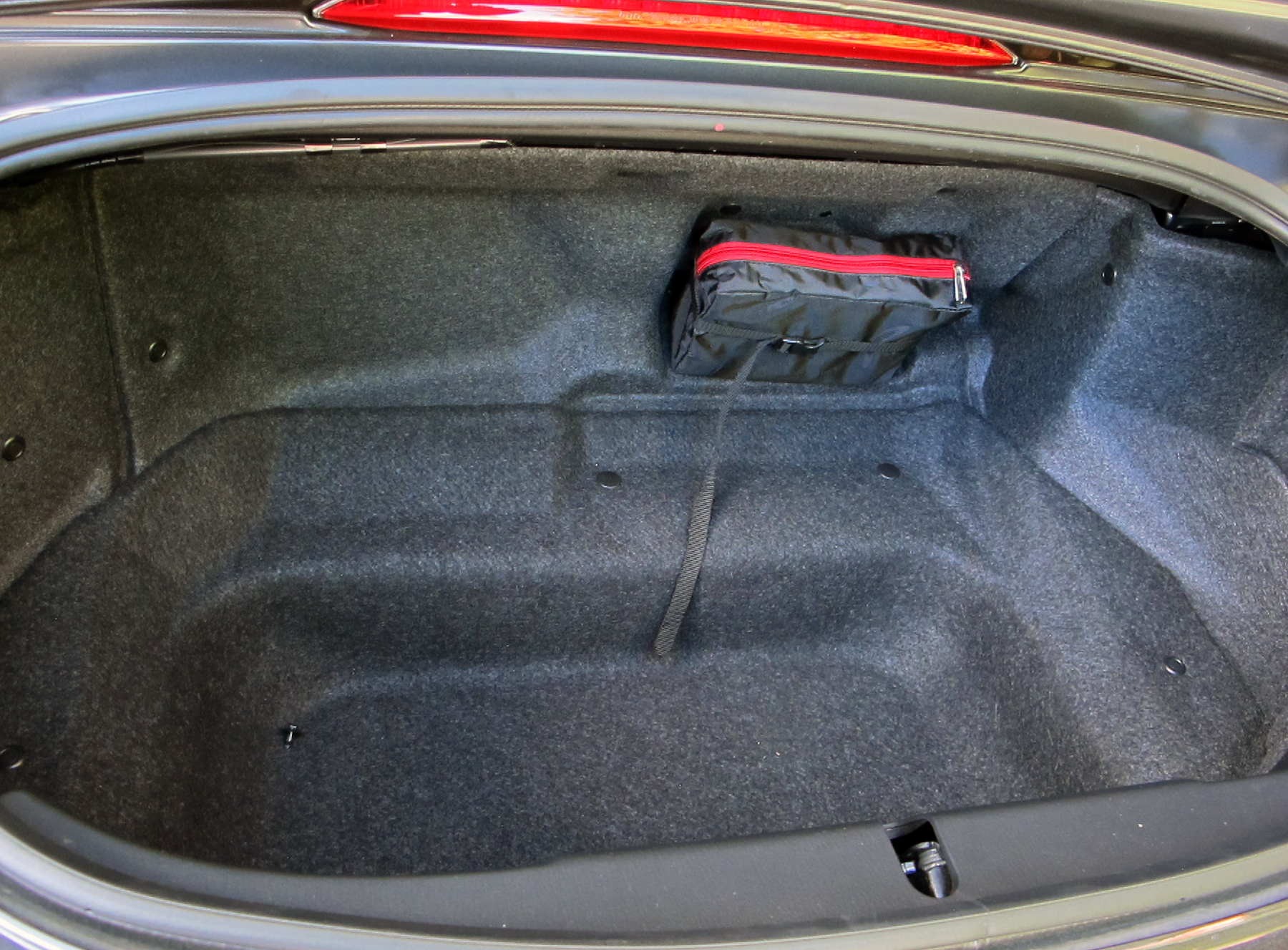 Trunk space is limited at 130 litres.

Tom Matano, who penned the design of the first and second generation Miata has become a friend of mine and he was there with me when the new, fourth generation MX-5 was unveiled two years ago.

You May Also Like: Mazda Miata MX-5 designer Tom Matano a.k.a Mr.Miata and me

I’ll always remember him exclaiming, “They nailed it.”

And he was right. From the side and especially the rear, you can mistake the MX-5 for a Jaguar F-Type roadster.

The soft top on the MX-5 is easily raised and lowered by one hand and features a glass rear window with defroster and includes a draft blocker between the seats.

Another plus of the MX-5 is its relative simplicity. When it comes to DIY things such as changing the brake pads, the parts are readily available.

Since it bowed, Mazda has always said all of its products have “the soul of a sportscar”.

And that soul can nowhere better be found than in the MX-5 GS Sport. 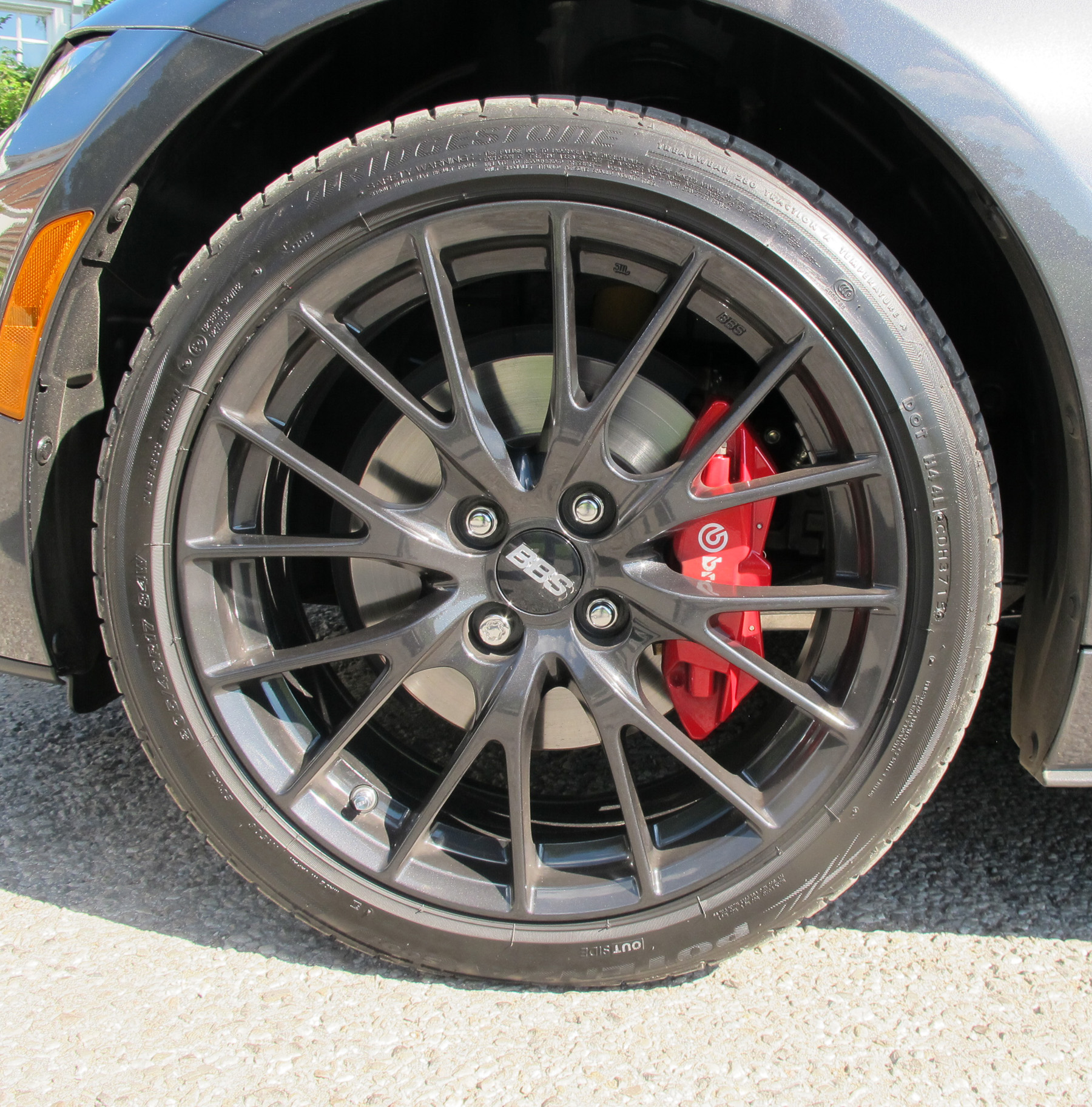