The new-for-2017 AMG SLC 43 picks up where the SLK left off in the Mercedes-Benz lineup. This year’s AMG offering comes with a 3.0-litre biturbo V6 that produces 362 hp.

“A Mercedes-AMG SLC 43? I thought it was an SLK,” asked a neighbour, as he eyed the bright Fire Opal red sports car sitting in the driveway.

The SLC 43 marks the entry point into the roadster lineup for AMG, the Mercedes-Benz performance arm, headquartered in Affalterbach, Germany. 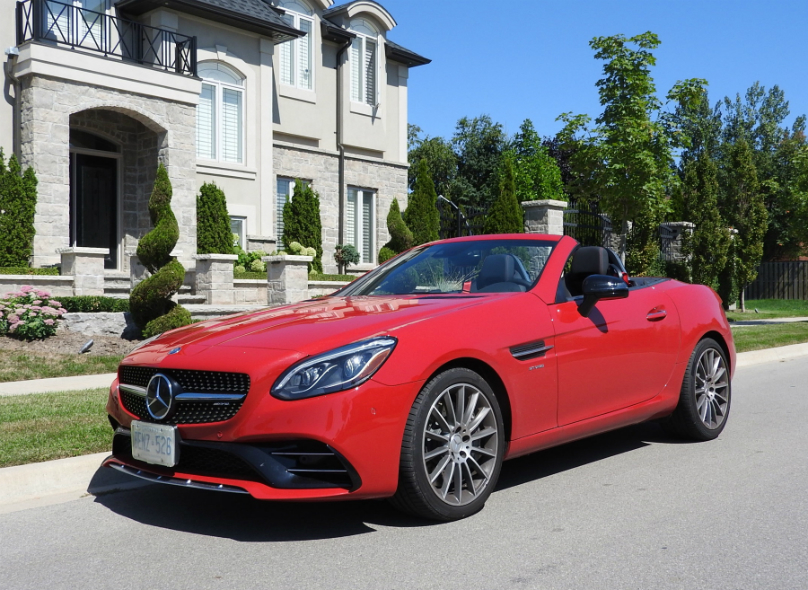 From a front view, there’s no doubt this is a Mercedes-Benz with the logo highly visible in the middle of the grille. The design emphasis at the front is one of width, giving the car a firmly planted stance.

It is the first V6 model from AMG with the new nomenclature. In this case, it gets the ‘C’ in its name as it is most closely aligned with the C-Class lineup.

No matter what the name, the SLC continues a tradition that the SLK launched two decades ago. Since then, more than 670,000 units have been sold worldwide.

For 2017, two versions of the SLC are available in Canada, representing the refresh of the SLK generation that debuted in the 2012 model year. 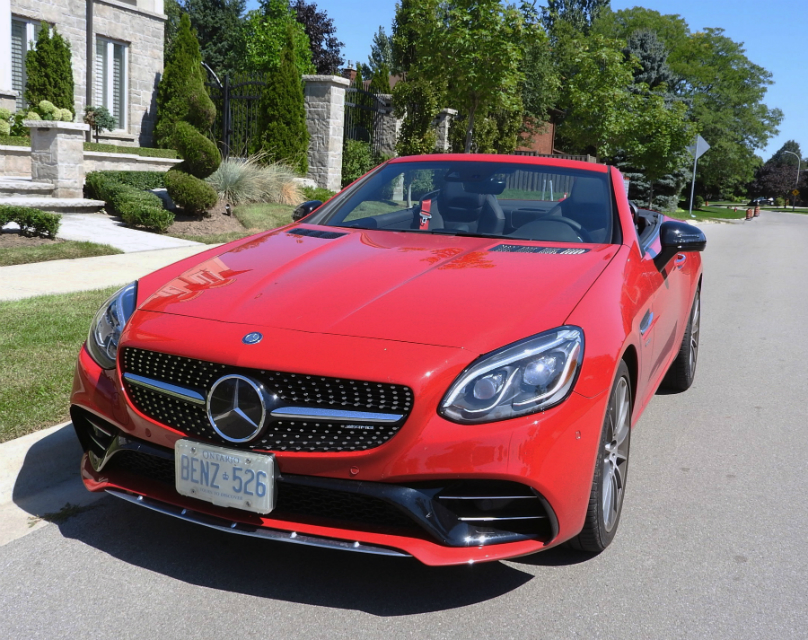 The ‘starter’ is the SLC 300, while our top-of-the-line AMG SLC 43 test car boasts a 3.0-litre DOHC biturbo V6 engine, making 362 hp and 384 lb/ft of torque at 2,000 rpm. It is mated with a nine-speed automatic (9G-TRONIC sports transmission), complete with paddle shifters.

Outside, the SLC’s sheet metal has a fresher, more rounded look with a new front fascia, designed for an emphasis on width.

From the side, 18-inch multi-spoke alloy wheels are a distinctive feature. 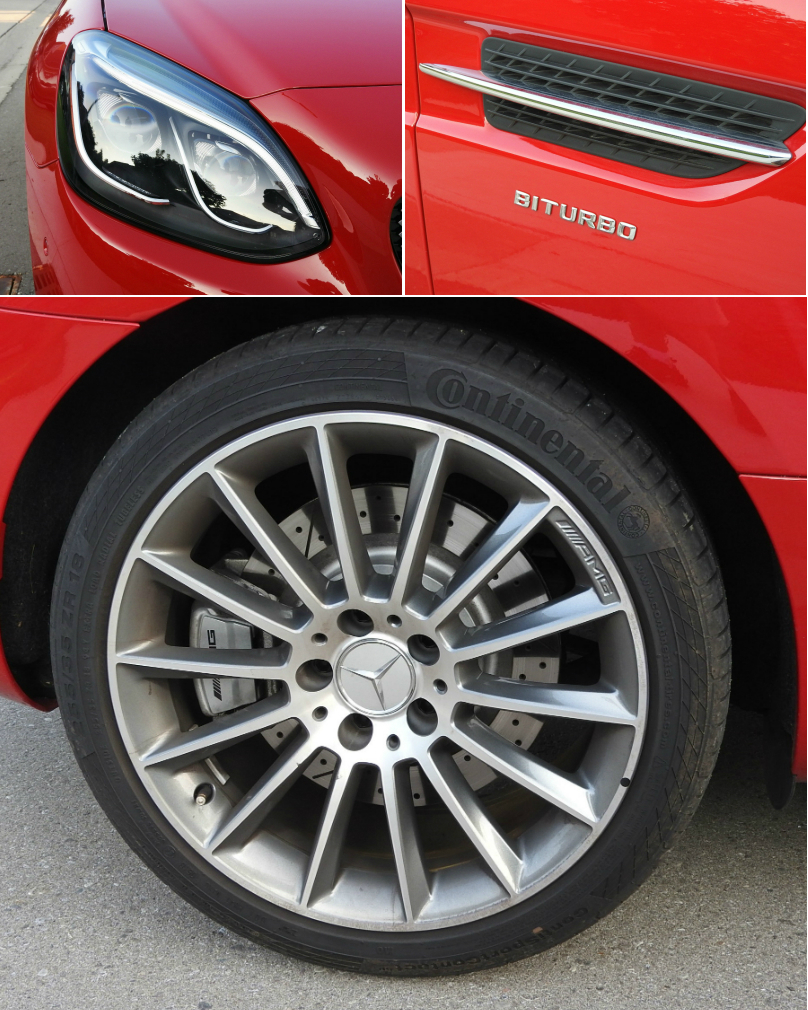 At the rear are dual chrome exhaust pipes and a chrome strip at the bottom of the apron.

Perhaps the defining feature of the SLC is its retractable hardtop that neatly stows in a compartment in the trunk. You can even open or close the roof when the car is in motion at speeds up to 40 km/h — a benefit if a rainstorm comes up quicker than anticipated.

The trunk is on the smallish side but still generous for this segment, featuring 335 litres of cargo space with the roof up and 225 with it down. 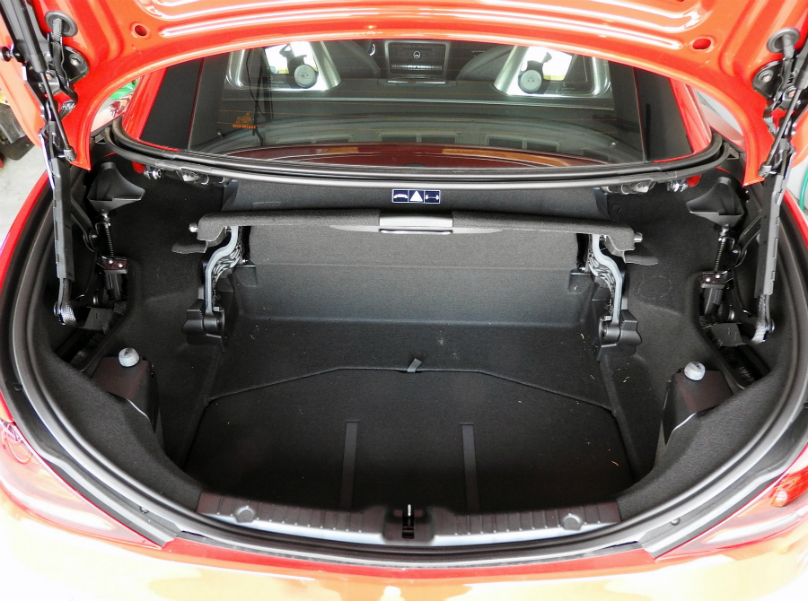 The trunk, shown here with the top up, has 335 litres of cargo space and 225 with top stowed.

Our tester also had the optional Magic Sky Control roof ($2,800), a glass roof that can alter the amount of light allowed in the car. You can switch from dark to transparent with the touch of a button. A cool, but costly feature, that does eliminate the need for a sunshade and provides an open-air feeling in the cockpit.

The other major option was Distance Pilot Distronic ($1,200), Mercedes-Benz’s version of advanced cruise control that maintains the distance from the vehicle in front in stop-and-go traffic. 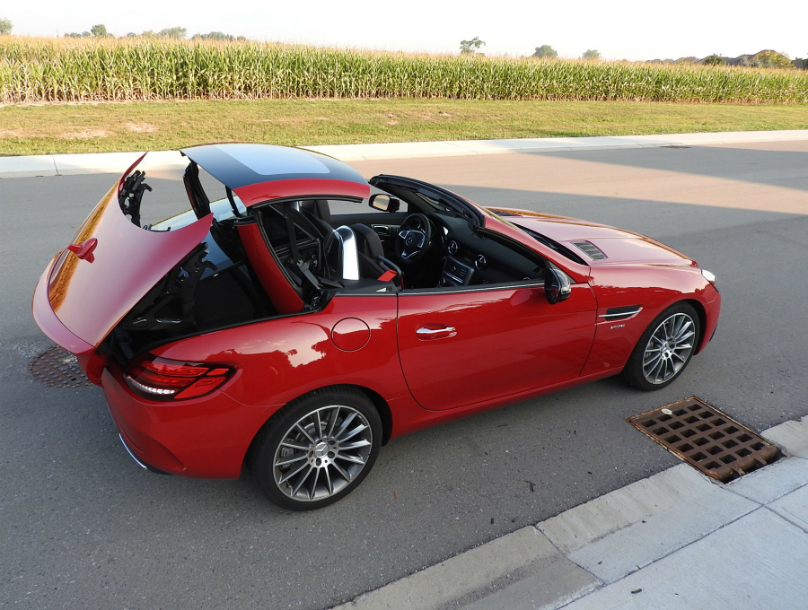 The top is a marvel of engineering and neatly stows in a rear compartment.

Even at $80K, this AMG-lite model offers good value for the dollar. While engine size is down from the 5.5-litre V8 in last year’s SLK 55 AMG, it does provide the buyer with more than decent performance in a grand touring roadster, doing the 0-100 km/h sprint in 4.7 seconds, according to the manufacturer. This is just a tenth of a second slower than last year’s V8.

You May Also Like: Topless Tour of The Ontario Highlands

For most, however, the V6 will provide plenty of power with the added benefit of better fuel economy.

From a personal standpoint, I find the new design the best yet for an SL model. It is clean, modern and sleek, with the top up or down.

Inside, the cabin has also been refreshed with new multi-function sport steering wheel, updated instrument cluster with the same seven-inch screen as on the C-Class sedan and more infotainment features. 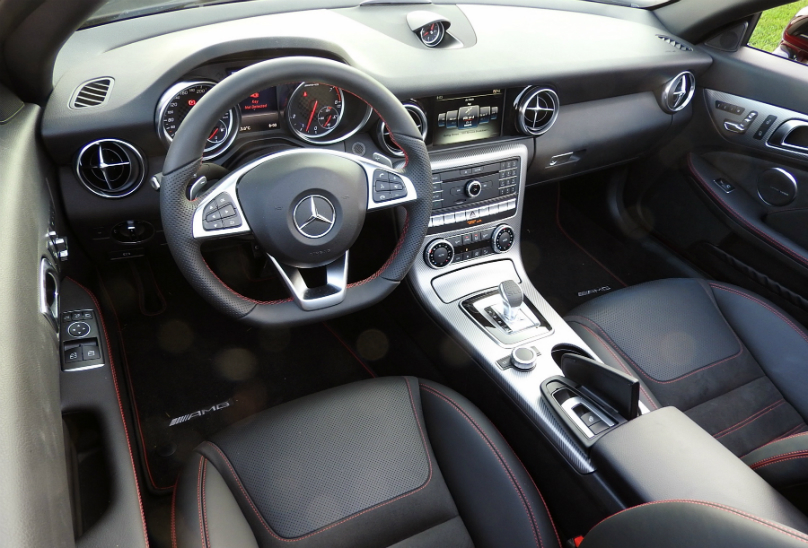 The cabin has been updated for 2017 with new infotainment features and the same seven-inch screen found in the C-Class vehicles. Plush Nappa-leather upholstery is accented with red stitching.

Out on the road, the SLC 43 is a treat to pilot, particularly when the roads become crooked and the traffic becomes lighter. The ride is firm thanks to the AMG sports suspension, yet composed, and with the top down on a cool evening, the optional Airscarf (part of the Premium Package) is a treat, with warm air wafting from vents in the headrests. 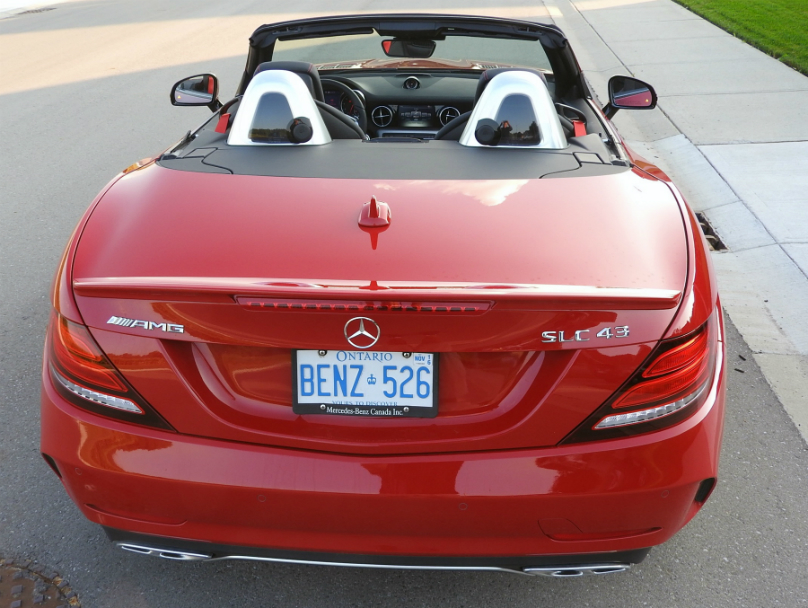 While more of a cruiser than a racetrack performer, the AMG version of the SLC has an intoxicating exhaust note when you select a performance-oriented driving mode such as Sport+ from the Dynamic Select system. Other selections are Eco, Comfort, Sport or Individual, all designed to adjust throttle, shift and steering response on the vehicle, all available with the touch of a finger.

All in all, the Mercedes-AMG SLC 43 offers an exciting design with excellent drivability and a touch of performance to boot. And best of all, with its retractable hardtop, this is a sports car with four-season capability. 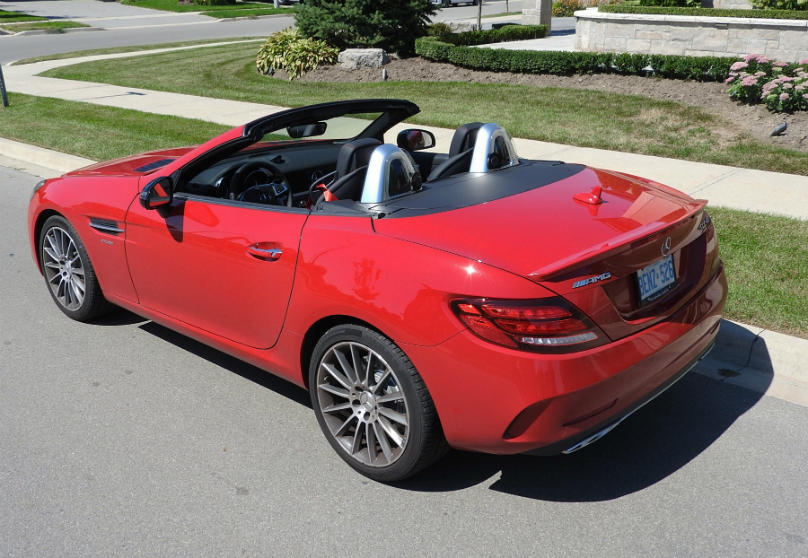 The SLC 43 represents the entry point into the roadster world for AMG. The rear features an AMG spoiler on the trunk lid and two quad-flow chrome-plated tailpipes.