Shows strong performance, handsome styling inside and out

MUNICH, GERMANY — The term “coupe,” when applied to a car, derives from the French “coupé,” meaning “cut,” as in chopped off.

It traditionally referred to a sedan which literally had been “chopped” — typically shortened, losing the rear doors, and with pillarless sides, i.e. no roof pillar between front and rear side windows.

By any stretch of that definition, the new 2020 Mercedes-Benz CLA 250 is a sedan.

But the marketing types win again, so this car is being flogged as a coupe. Yep, they have even dropped the accent aigu.

From the “a rose would smell as sweet by any other name” file, let’s carry on.

The CLA will grace our shores later this year. Pricing won’t be announced until closer to the launch date. The current model starts at just over $40,000; with the added features in the new model, I am guessing it will start around $45,000.

As before, the CLA is based on the B-Class platform, which starts as a front-wheel drive transverse-engined car. We will only get a four-wheel drive CLA and, initially at least, only the so-called “250” model.

Mercedes has abandoned the ultra-logical, ultra-German nomenclature of naming cars after the displacement of the engine. As turbo engines with smaller displacement yet more power started taking over, the thought was that the customer for, say, a new S-class with a 4.4-litre turbo engine, which replaced a five-litre V8 non-turbo, would think his car somehow had less image if the number were smaller. 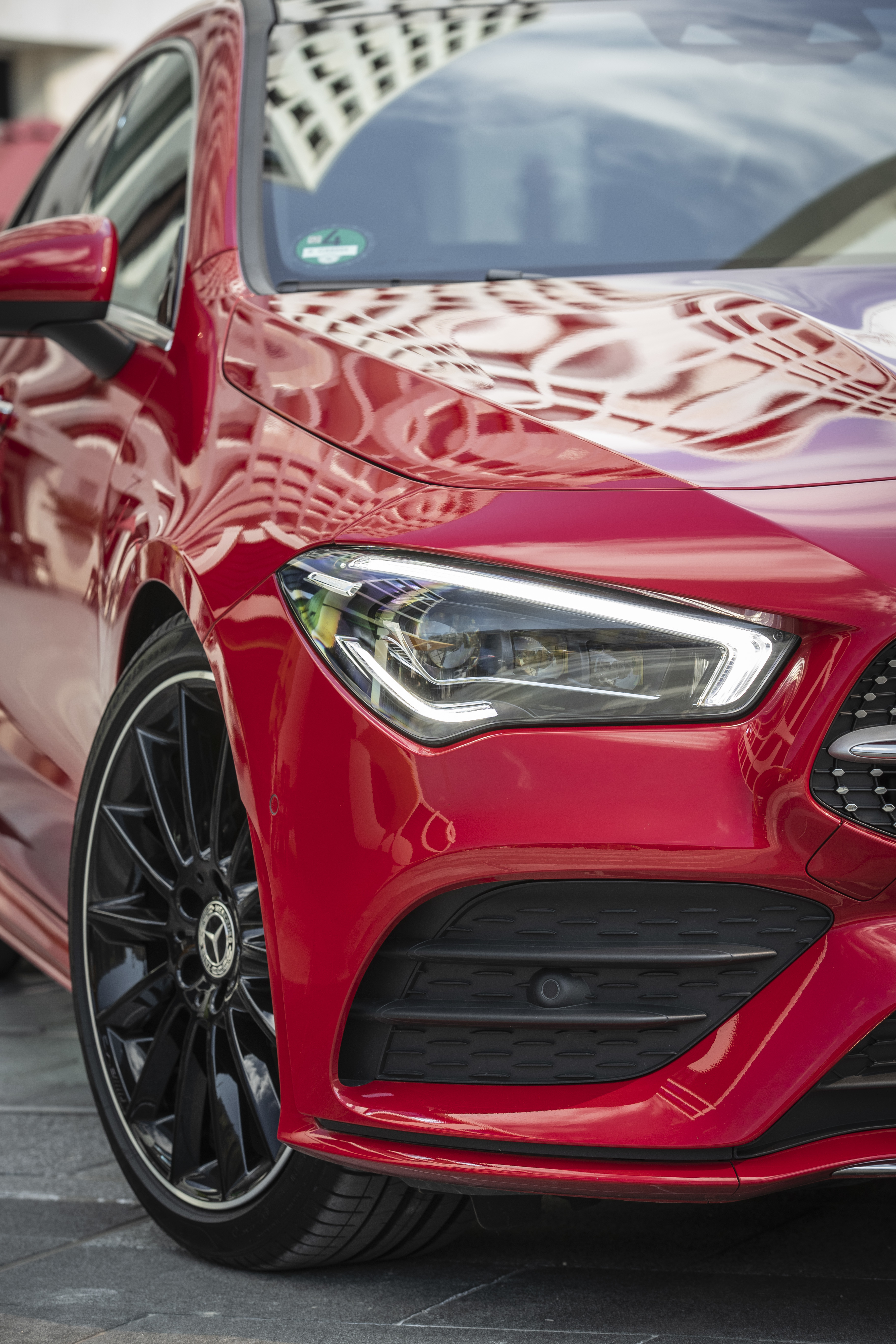 Hence the CLA 250 we get has a 2.0-litre turbocharged four cylinder engine producing 221 horsepower and peak torque of 258 lb.-ft.

Try as I might, I couldn’t find r.p.m. numbers for either of those values.

The new CLA is fractionally longer and wider than the previous generation. In fact, it is a titch longer than its supposed big brother, the C-Class.

Any coupé, no matter how many doors, is all about style. The new CLA has an aggressive “shark nose” grille and sleeker body sides with fewer lines and creases, giving a sleeker look.

Frameless side windows are a must for anything calling itself a coupé, even though the car has central side roof pillars.

The trunk is slightly smaller than before, but at least the opening is broader for easier loading.

The trunk can also be opened by kicking under the rear bumper, which is handy when your hands are occupied carrying bulky loads to the car.

The new car is longer than its predecessor by 48 millimetres, the wheelbase is 30 mm longer and both front and rear tracks are wider, giving it a stronger road presence.

The biggest improvement, however, is in the interior, where the down-market look of the old model is replaced with something that would look good in Mercedes’ higher-priced models. Materials and execution are first-rate. 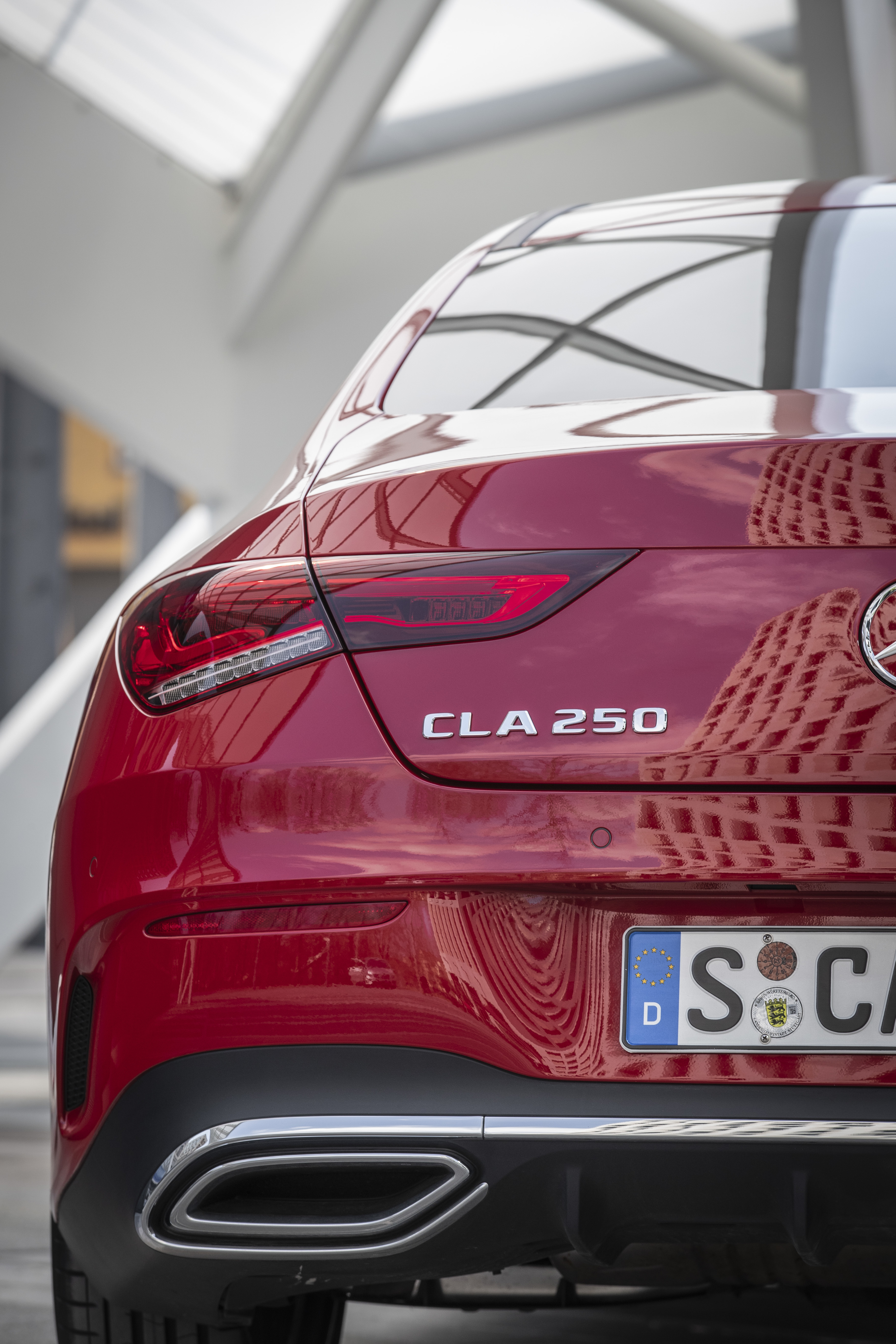 The seats are firm but comfortable in Mercedes’ time-honoured tradition.

Even in an ersatz coupé, rear-seat room isn’t a priority. That said, getting in to that rear seat isn’t as difficult as the swoopy roofline might indicate.

And while a cross-country trip back there wouldn’t be recommended for adults, it easily meets the “beats walking home in the rain” criterion.

From the driver’s seat, five big eyeball dash vents stare at you, providing excellent ventilation that can be directed wherever you wish.

A pair of bright, clear, multi-programmable screens dominate the dash. The centre one, a 7-incher, is standard fitment, with a 10.25 inch one optional. Our test cars all had the larger one.

Information is well-presented, although, as usual, it will take a while to master how to display just what you want.

Apple CarPlay and Android Auto are both supported.

Seems to me, Lexus was first with this technology, but in my limited experience this one works even better.

There are seemingly dozens of screens to work through, and even though we only had a few hours (an owner will have years) and the car tried to stump us a few times, we figured it out without too much cursing and swearing. 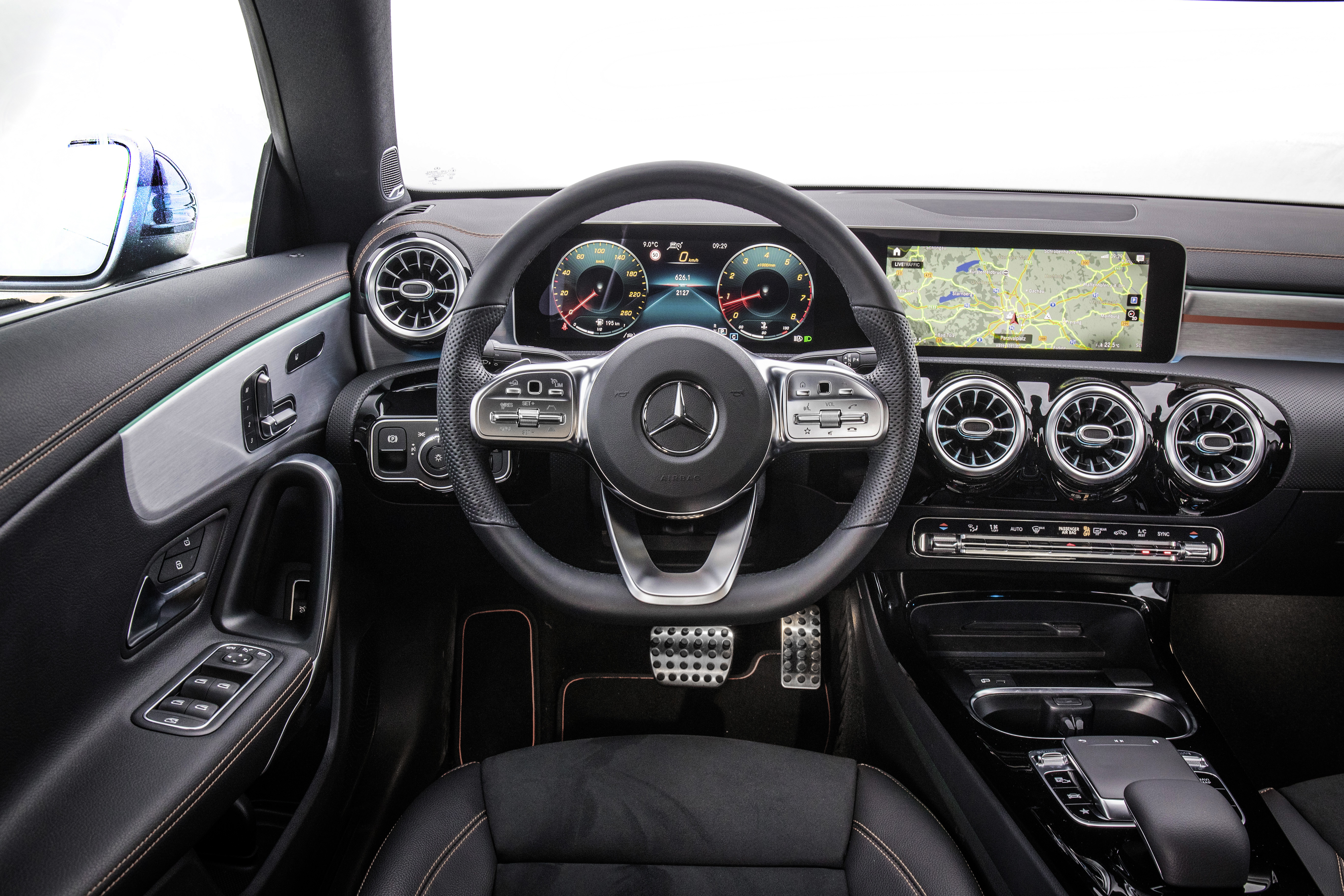 The Mercedes-Benz User Experience (MBUX) system allows you to control a myriad of functions with a Siri-like voice response that purports to understand “natural language” commands. Just say, “Hey, Mercedes,” followed by a request, such as, “Find me a pizza restaurant within 10 kilometres,” and it will do its best to accommodate.

Surprisingly, for a German car, it even has a sense of humour. Just say, “Hey Mercedes — tell me a joke!” And “she” answers, “Sorry, my engineers were Germans.”

More typically, if you ask that question when you are not stopped, she says, “Sorry, I am driving.”

The trouble with this system is that you will soon get very tired of the damned thing. If you are speaking to anyone else in the car, it is bound to jump in with, “How may I help you?,” even if you haven’t used the “Hey, Mercedes” code words.

A couple of times it chimed in when no-one in the car was even talking.

And once it just came on with an unsolicited weather report.

This system is supposed to have self-learning capability, so maybe it gets better as you use it more. I think it needs some fine-tuning. Either way, we just turned the bleeding thing off.

This was the international press launch for this car, and the test cars available did not always perfectly reflect the equipment we will get back home.

But for our main test drive day, we did manage to secure as close to a Canadian-spec car as we could.

Some of the available equipment, such as the Smell-o-vision feature by which you can inject various perfumes into the car, probably driving any passengers with allergies crazy, we will not get. No loss. 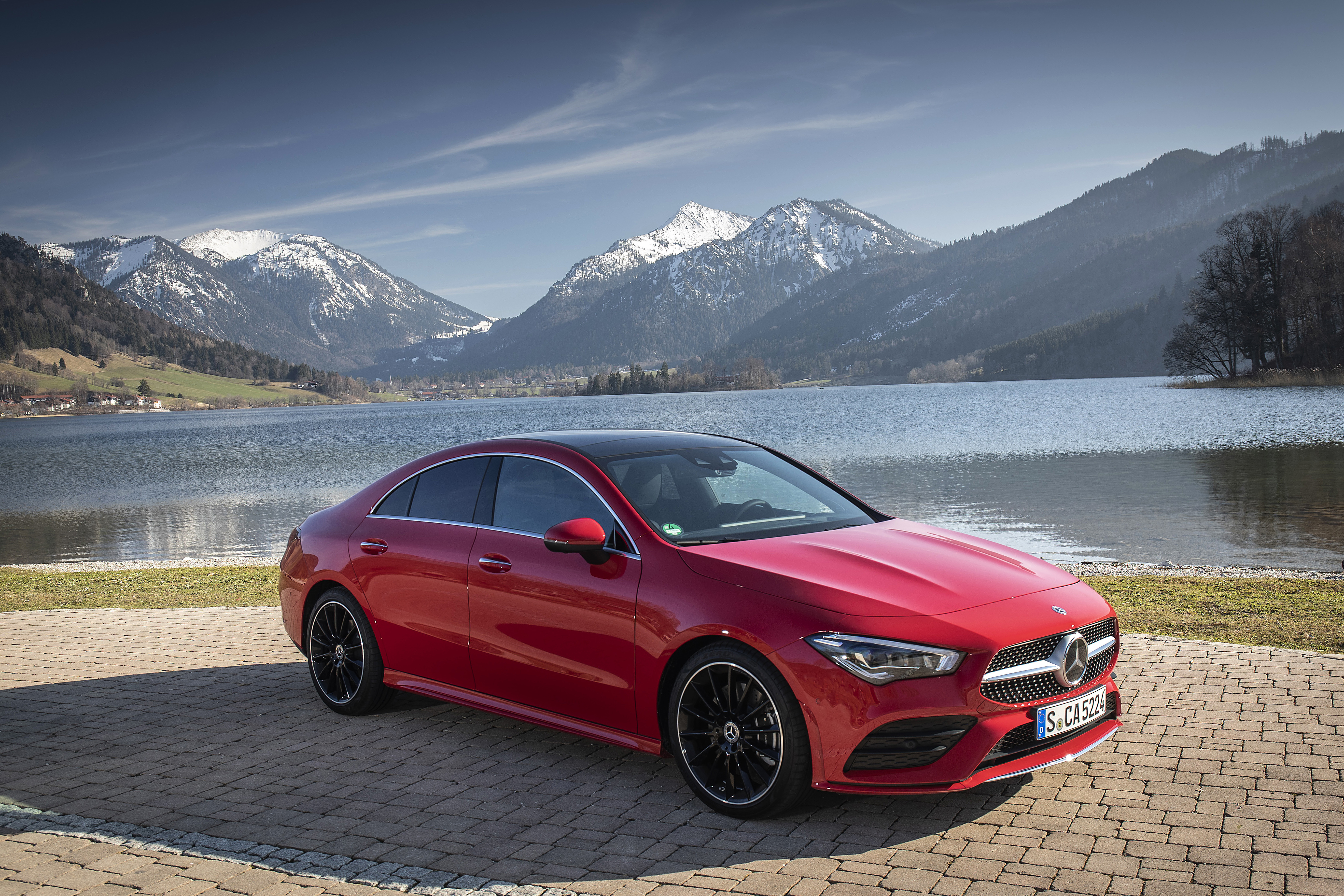 Nor will we be getting the adaptive dampers with which our first test car was equipped, which is too bad, because this feature would surely be far more helpful on our frost-heaved pockmarked roads than on the glass-smooth surface of most German highways.

We drove two powertrains, diesel and gasoline, but I will focus here on the latter because we won’t get the former.

It provides sprightly acceleration, with little evidence of it being a turbocharged engine. That is, little discernible turbo lag, just smooth, effortless power.

The seven-speed dual clutch automatic is operated by a little toggle lever on the steering column. Down for Drive, up for Reverse, pull for Park.

Left to its own devices, the transmission shifts seamlessly.

If you think you can do it better, steering column paddles allow manual override.

A dedicated rocker switch on the centre console allows you to choose ECO, Comfort, and Sport driving modes, which change such things as throttle response and transmission shift speed in what should be self-explanatory ways to reflect the chosen mode.

A fourth mode, “Individual,” allows you to choose your own values for the various parameters.

Perhaps the most noticeable change between Comfort and Sport modes is how the transmission behaves. Pick Sport mode, and as you decelerate, the transmission automatically shifts down to successively lower gears on the theory that when the road opens up again, you want to get going RIGHT NOW, so the car is prepared. 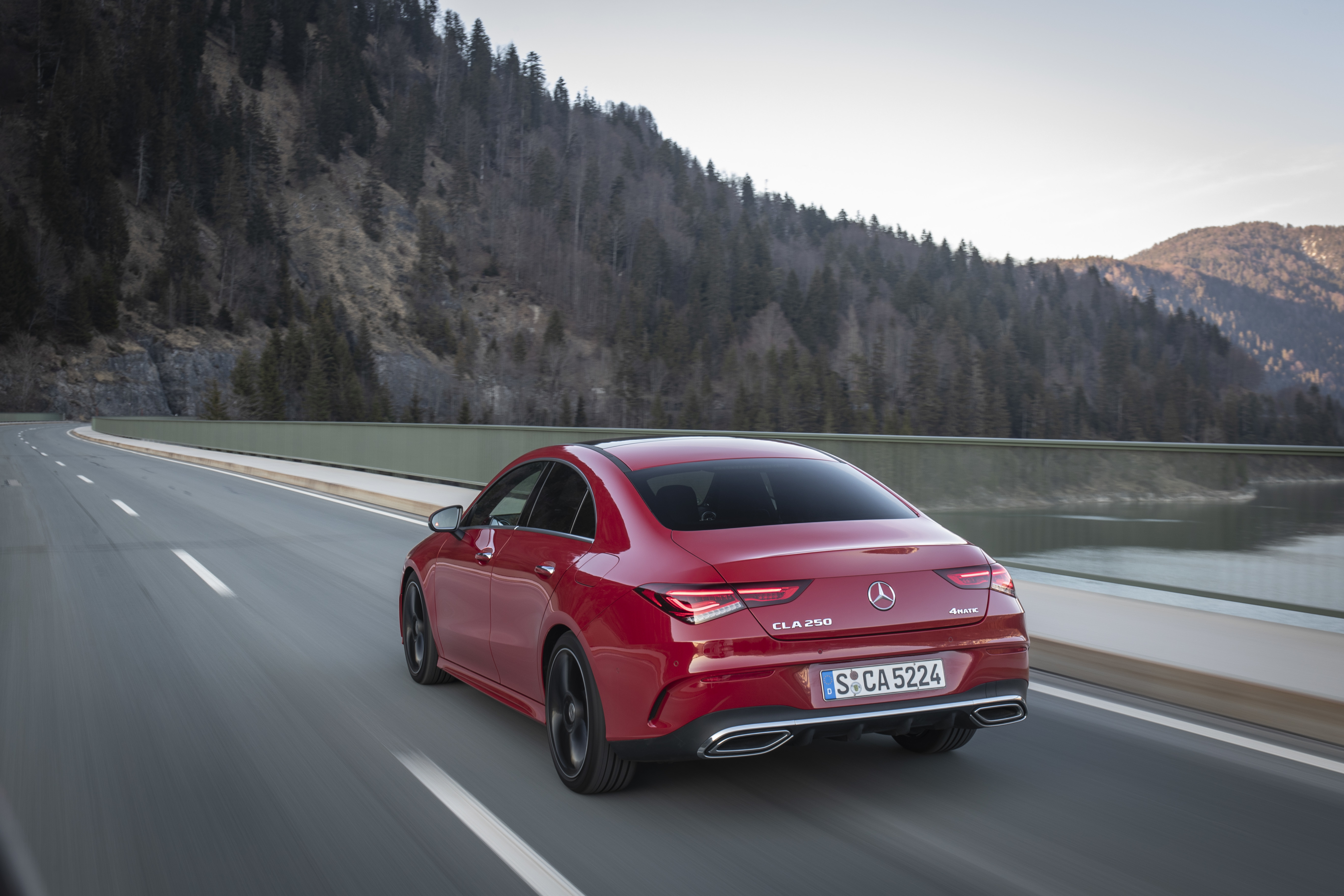 In Comfort, it leaves the car in a higher gear until your throttle foot demands more. Or until you hit that left shift paddle.

The car’s ride is comfortable, the handling confidence-inspiring.

One mystery in the car remains unsolved. Every once in a while, the car would slam on its own brakes, only for an instant, but with a loud and startling BANG.

I wondered what would have happened if we were on an icy road at the time.

Presumably, this was the crash prevention feature of the car, whereby it detects imminent danger and gets on the brakes to prevent or mitigate the inevitable collision.

But in all these cases — other members of our road test group experienced the same thing — we were in light traffic, nowhere near another car and in no danger whatsoever.

And a couple of other times we were driving on a smooth straight road with no other cars in sight. What was the car seeing that we weren’t?

None of us had a clue what was going on, and when we explained this behaviour to the engineers on hand, neither did they.

But it does not give you much confidence in the system’s accuracy. If it brakes for phantoms, how can you be sure it will brake for a real potential emergency?

Clearly there is a calibration issue here that better get ironed out in final testing.

The CLA has lowered the typical age of entry into the brand by about six years in Canada, up to ten years in other markets. That’s at least one product cycle sooner. Presumably, if the customers are happy, they will move up the Mercedes ladder when the time comes.