Available for delivery in late spring, the go-faster coupe is in your face — and go for the bright, green finish.

That’s where AMG, the go-faster division of Mercedes-Benz, did much of the development work on the new Mercedes-AMG GT R coupe.

The GT R is the third iteration of the GT coupe family which debuted at Paris in 2014 in base and ‘S’ specification.

The R is now available for ordering for delivery in late spring, although the MSRP has not yet been announced.

Officially, AMG said the GT was not a replacement for the much-loved but somewhat impractical gull-winged SLS coupe. But the GT continues and the SLS is gone, so draw your own conclusions. 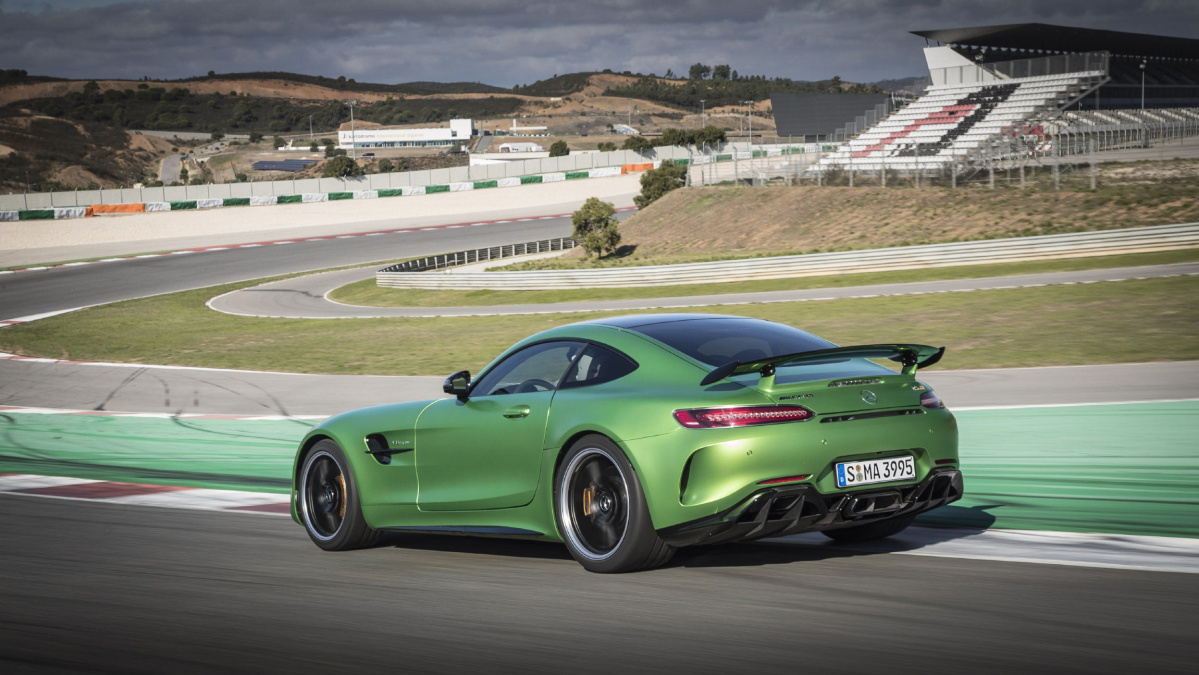 The ’Ring also provided the inspiration for a new paint colour, called “AMG green hell magno,” an impossibly bright green metallic matte finish which I can’t imagine anyone not ordering for this car.

Surely this will be next year’s “Green Car of the Year.”

Even if you don’t get the green paint, there’s no mistaking the GT R for the normal GT. A completely revised front end gets a big air splitter, wider air intakes, and wide-spaced vertical grille bars. Yellow brake calipers, unique wheels and badging differentiate the sides.

A massive fixed rear deck spoiler and carbon-fiber-wrapped exhaust system with a double diffuser highlight the view most people will see — the back.

And while it isn’t quite the full-race GT3 model, it’s about as close as you can get and still be allowed on public roads.

Still, that’s about 20-odd ‘pferdes’ (German for ‘horses’) fewer than the AMG E63 sedan. When I asked AMG boss Tobias Moers about this, he replied, “I don’t like overpowered sports cars!”

Um, sorry, but we all love overpowered sports cars …

He then allowed that the torque capacity of the dual-clutch, seven-speed rear-axle-mounted transmission was the rate-determining factor, compared to the nine-speed automatic used in the big sedan.

Carbon fiber is used extensively in the GT R to reduce weight — in the front fenders, roof, various internal components, the torque tube connecting the engine to the transmission, and in the prop shaft that rotates therein. 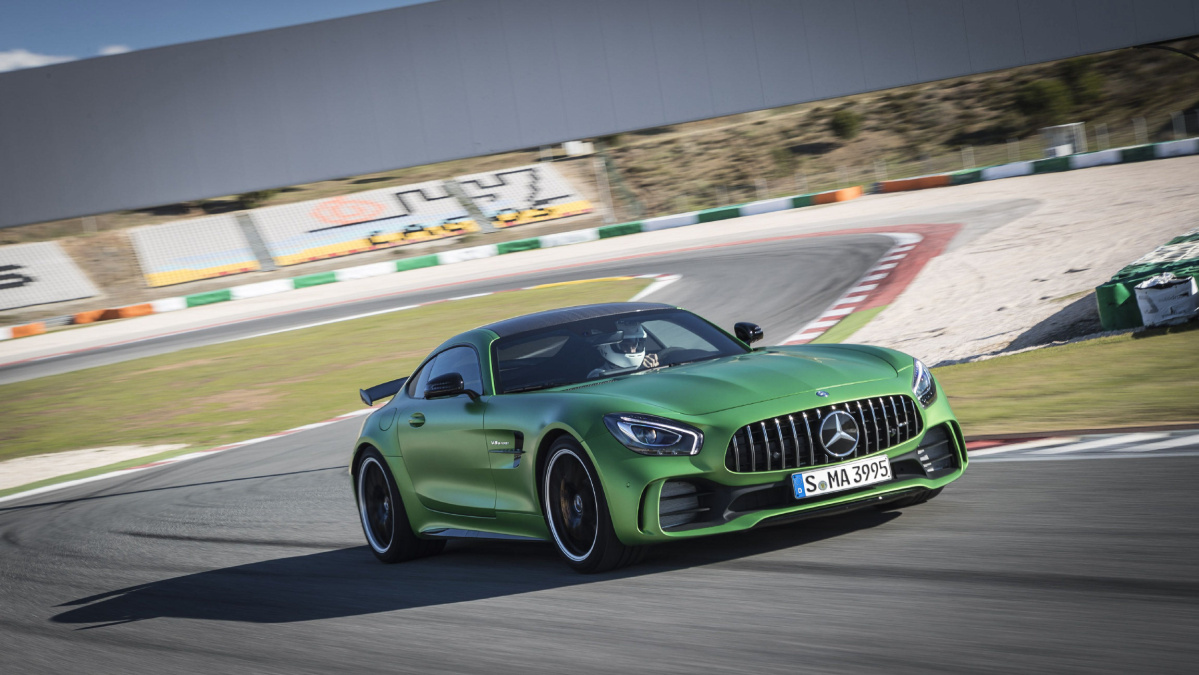 Race-inspired coil-over shocks have multiple settings depending on how hard you want to push, with more-than-acceptable levels of comfort when just poking along.

But the biggest change is the first adoption of rear-wheel steering in a production Mercedes. Electrically operated actuators dial in up to 1.5 degrees of angularity, counter-phase up to 100 km/h to improve agility, in-phase above that for improved stability.

Thomas Jager, my instructor at an AMG driving school at Spa a few years ago and one of the race car drivers who helped fine-tune this car, has said that in development, they could switch this feature off, and even the race drivers were impressed at how much difference it made.

You don’t get that choice, and probably just as well. Just enjoy it.

Active aerodynamics include front-end shutters that close in cornering to aid downforce, and open on the straights to improve cooling.

A panel under the front air dam also lowers automatically by about four centimetres into the underbody airflow at higher speeds to further reduce drag and create a road-sucking ‘venturi’ effect.

Testing a car like this simply demands some track driving. AMG brought along ex-Formula One driver and five-time German Touring Car champion Bernd Schneider to drive our pace car.

He explained how the five-lap sessions would work: three of us ducklings would follow him; one warm-up lap; after each hot lap, the front duckling would move to the back so everyone got one lap right behind him; one cool-off lap. 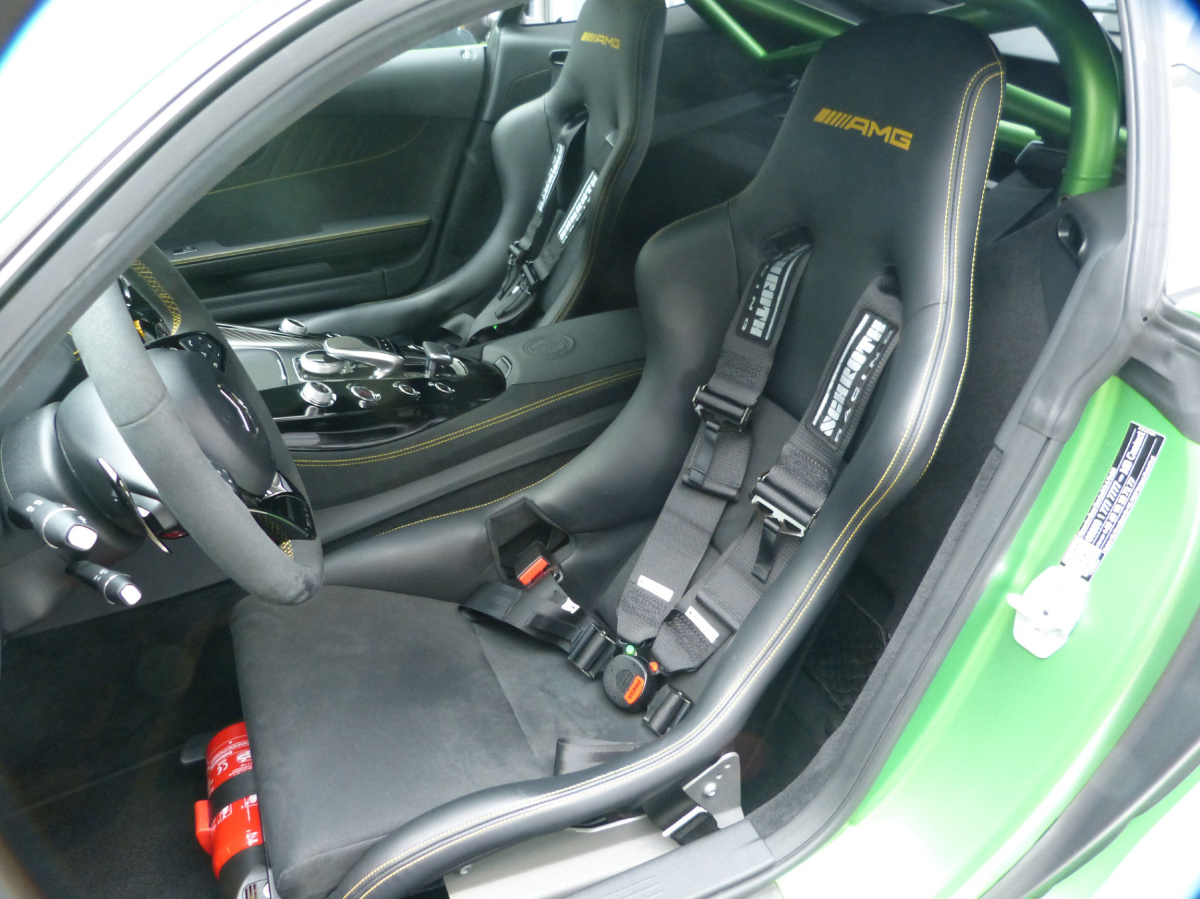 I asked if bump-drafting was allowed.

He grinned and replied, “If you can …”

Who says Germans don’t have a sense of humour? Oh, in case you didn’t guess, I couldn’t …

In situations like this, once you convince your pace car driver you have half a clue, he will pick up that pace so you can explore your limits, if not necessarily the car’s.

Schneider says he is ‘old school’ and likes to shift the transmission himself. By that, he meant using the steering wheel paddles.

But he suggested we let the car shift automatically because it actually is faster that way.

It truly was, seemingly knowing when we were approaching a corner and downshifting appropriately.

Also Read: Nissan GT-R is every Inch a Supercar

The Electronic Stability Program (ESP) has three different settings, and the Traction Control program nine, each allowing a higher degree of freedom before intervening.

Schneider pointed out that even for the development drivers, leaving the systems operating in the least intrusive settings was faster because they could push harder without fear of losing the car altogether.

Again, good advice, because with this much torque in a rear-wheel drive car, wheelspin is never far away.

And with intermittent rain showers, well, nobody wants to be That Guy.

The GT R isn’t the easiest big, powerful car to get used to right away. The racing-style sport seats which don’t appear to be on the Canadian order form are not height adjustable, so you sit low in the car, peering out over the hood that looks big enough to land a fighter jet on. 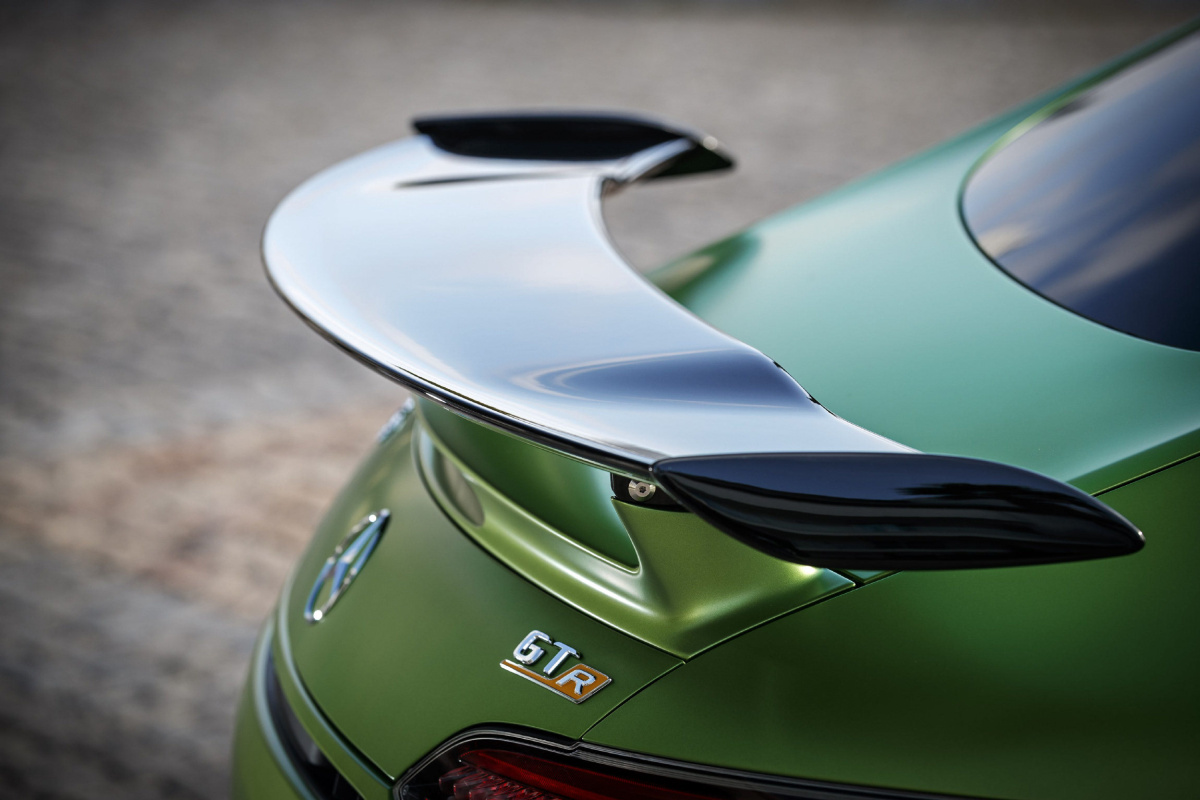 So eye-tracking to the apex wasn’t as easy as, say, a Porsche 911 Turbo S, which would appear to be the GT R’s most obvious competitor.

Apart from the fearsome acceleration — 0 to 100 km/h is given as 3.6 seconds using the Race-Start function, but it feels faster than that — and the furies-released-from-that-green-hell exhaust note, the single most impressive aspect of the car’s performance is the turn-in. Those big, sticky Michelins just bite into the pavement like they had nine-inch nails sticking out of their treads.

Yet we were assured it was the rear-wheel steering that was largely responsible for this behaviour.

Hey — whatever works. And this works.

Overall cornering power is also prodigious, as is the stopping power from the optional carbon ceramic brakes that were fitted to our track cars.

We also took the GT R out for a drive in the Portuguese countryside. Not exactly poking along, but trying not to become a long-term guest of the local constabulary either.

As noted earlier, the car is decently comfortable in, well, ‘Comfort’ mode. You will be spending a fair amount of your time looking for underpasses or rock walls so you can roll the windows down and hammer on that aptly named loud pedal.

So, it could be a daily driver, but it would be a pretty intense one.

There isn’t a lot of subtlety about the AMG GT R. It is big, fast, loud, in your face.

Not a car for introverts.

Which is why you might as well order that green paint.