Automaker’s Super Sedan takes a big leap forward. AMG adds their hand-built-by-one-technician engine, in this case the twin-turbocharged 4.0-litre V8 which propels the big car from 0 to 100 km/h in 3.4 seconds.

PORTIMAO, PORTUGAL – “The new E 63 models represent the biggest step forward we’ve ever taken from one generation to the next.”

So says Tobias Moers, chairman of the board of management for AMG, the high-performance arm of Mercedes-Benz.

Given that this car is the great-grandson of the original ‘Hammer,’ the car that more-or-less created the Super Sedan segment, that’s saying something.

A wagon version will follow at an as-yet unspecified interval. It will be even cooler. 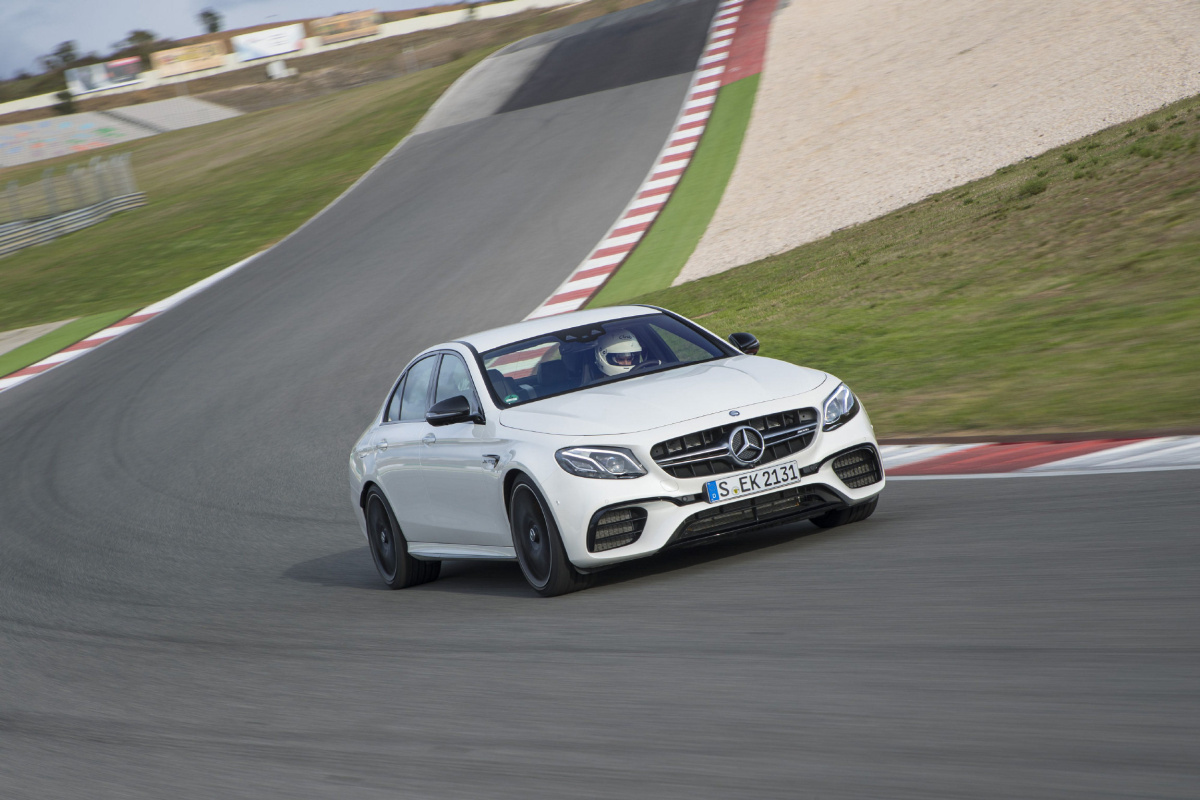 Putting a bunch of technology into a car isn’t all that hard these days.

Getting it all to work seamlessly — that’s the trick.

And the E 63 AMG absolutely has it nailed.

The car obviously is based on the new-last-year E Class, which is damned fine to begin with.

AMG adds their hand-built-by-one-technician engine, in this case the twin-turbocharged 4.0-litre V8.

Two states of tune are offered, the base E 63 with a mere 587 horsepower (using European-spec numbers here), and the E 63 S, the only one we’ll get in Canada, with 612 horsepower.

Perhaps more impressive, the European fuel consumption rating is as low as 8.8 l/100 km, thanks largely to a cylinder deactivation system which imperceptibly turns the engine into a four under low-load driving conditions.

All this urge is run through an AMG-massaged nine-ratio ‘Speedshift’ automatic transmission, with the AMG-exclusive multi-plate wet ‘start-off’ clutch in place of a torque converter which reduces both weight and shift times.

For just about ever, AMG models have been rear-wheel drive, that always having been de rigueur for sporting driving.

But four-wheel drive has become the norm in all luxury sedans, and AMG has figured out how to adapt it to their performance-oriented cars.

They have ‘AMG-ed’ Mercedes’s 4MATIC system, allowing fully variable torque split front to rear, depending on what the car needs to go fastest.

The already rigid E Class body has been further reinforced with thicker strut braces up front and added ones at the rear.

To make sure all this power keeps the car going where the driver expects, the suspension has been almost completely reworked. The four-link front and all-new multi-link rear set-ups are sprung by an adaptation of the AIR BODY CONTROL multi-chamber air system. 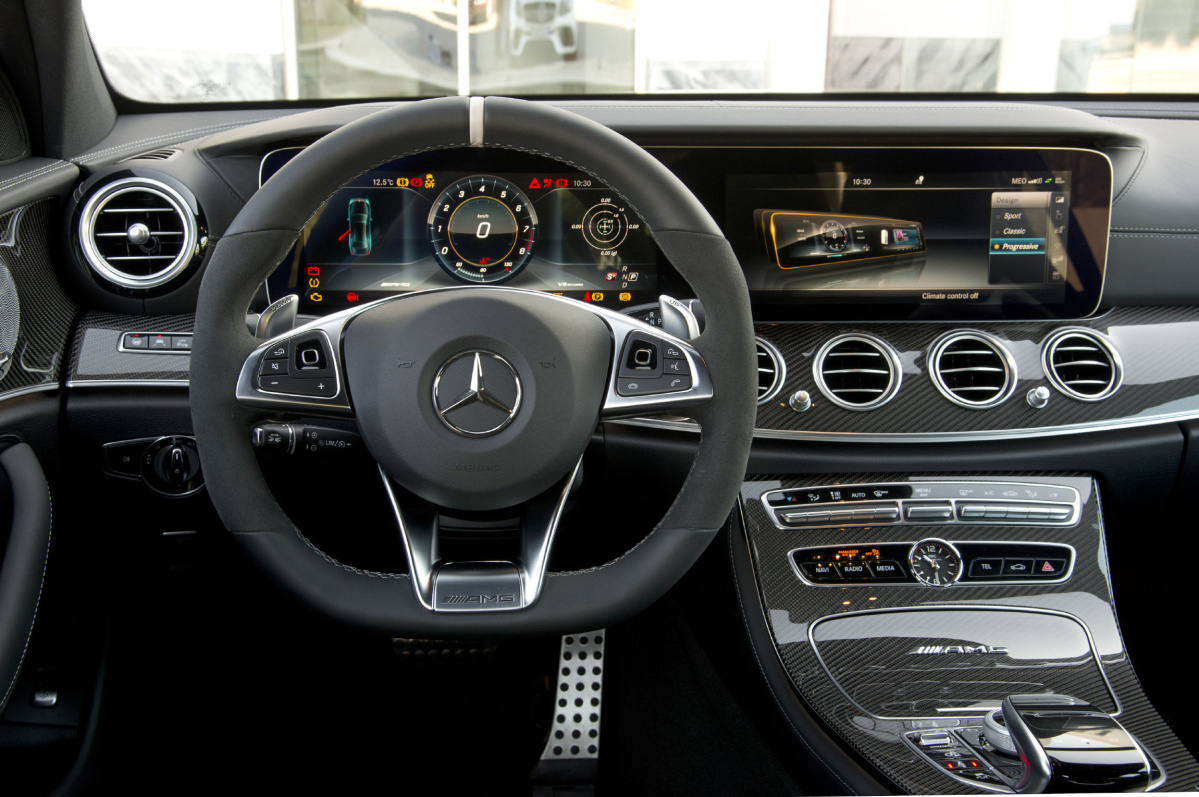 High-lateral-grip sports seats and a host of AMG-specific trim details highlight the interior changes of the Mercedes-AMG E 63 S 4MATIC+.

Spring stiffness and damper settings can be set to the driver’s preferences, and certain functions such as anti-dive (on hard braking) and anti-squat (on hard acceleration) are handled automatically.

The electromechanical steering has a new rack for quicker overall ratio.

To make sure your neighbours know you bought an AMG, the exterior is more differentiated from the normal E Class than before.

No boy-racer rear wings, but it’s pretty much all different, from the windshield A-pillar forward, with a more aggressive grille, big air scoops for the brakes, a fluted hood, and signature LEDs in the headlights which glow blue when the car is fired up.

Mathias Schoettle, overall development engineer on the car, wanted red devil-eyes, but even he had a budget …

The rear end gets a functional aerodynamic diffuser between the pair of dual chromed tailpipes, a somewhat subtle feature the cognoscenti will recognize.

High-lateral-grip sports seats and a host of AMG-specific trim details highlight the interior changes. A variety of instrument cluster layouts are at your disposal, again with a sport setup exclusive to this model.

As noted earlier, it’s how all this technology works together that impresses.

Choose ‘Comfort’ mode in the Drive Select program and your grandma could drive the car and never suspect it has over 600 horses. Until she nails the loud pedal, of course.

The ride is surprisingly comfortable, given the car’s capabilities and the performance-oriented tires, largely thanks to the bandwidth afforded by the air suspension system.

It also helps keep the car level in cornering, so even if you (or your grandma) are booting along a winding road at a fair clip, neither driver nor passengers will be tossed about unduly. 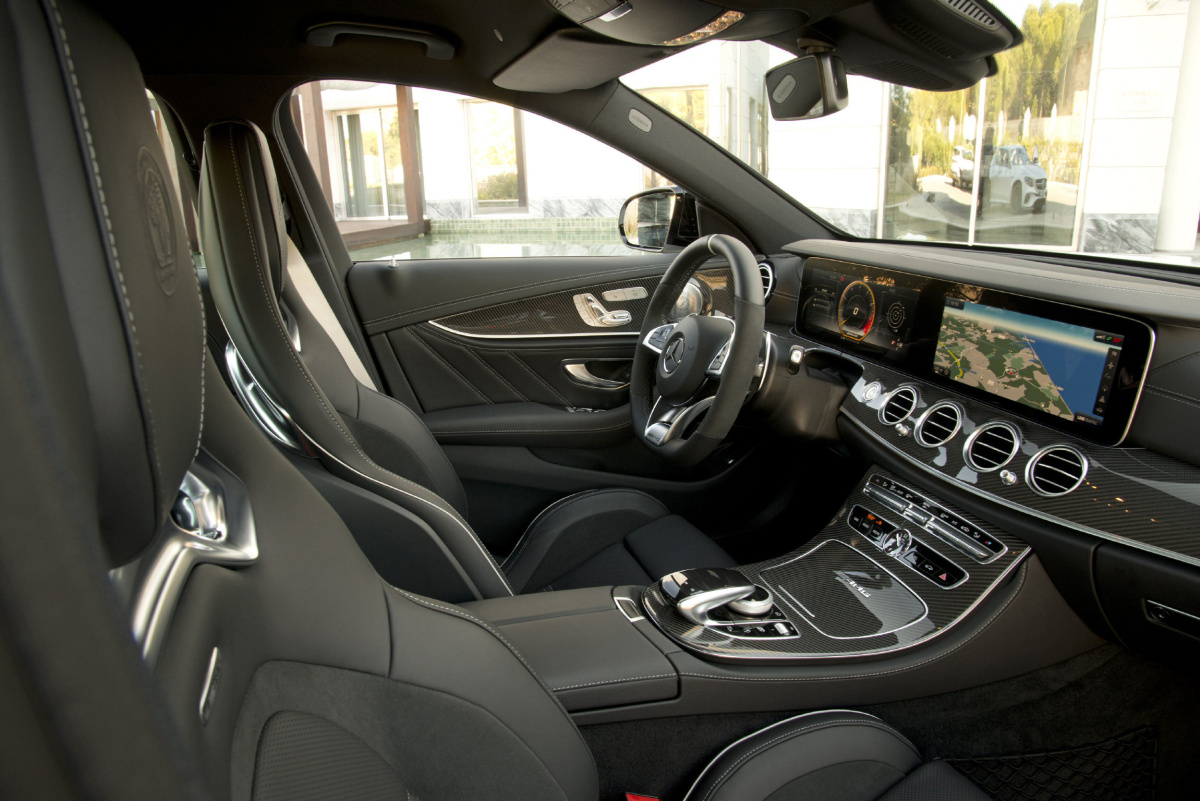 The Mercedes-AMG E 63 S 4MATIC+ ride is comfortable, given the car’s capabilities and the performance-oriented tires.

If cornering speeds exceed a certain threshold, the seatbelts tighten automatically, which is a bit disconcerting the first time it happens.

Dial up Sport, Sport+ or Race modes and things firm up, but not unreasonably so. As you move up this sporting spectrum, the steering gets increasingly sharper, transmission shift times are reduced, and the ESP function allows more slippage before it starts reeling you back from the brink of disaster.

There is even a ‘Drift’ mode buried deep in the software, although I think that is a tad unseemly for a car of this nature.

The roads north of Faro in Portugal’s southernmost Algarve province offer plenty of challenges for a car like this. Knowing we were heading to the Portimao race track, we didn’t feel the need to explore anywhere near the limits of the car.

Throttle response, often an issue with turbo engines, is so good I bet most people would never guess this is a turbo unless they read the badges on the sides of the car.

Steering is very nicely measured, light but with good communication as to what is happening at the road/front tires interface.

On the track, we followed an AMG GT pace car driven by five-time German Touring Car race series champion Bernd Schneider, i.e. no chance he’d be holding me up …

Turn-in was immediate, with none of the understeer that often plagues high-powered, four-wheel drive cars.

There was some chatter from those brakes when nailing them into the corners at the end of the two longest straights, which Schoettle put down to a bumpy track surface.

Otherwise, the car simply tracked true, went where you pointed it, with no fuss or drama.

Just amazing. Again, all these technologies work together to make you feel like a better driver than you are.

A few quibbles, most of which stem from the fact that most Mercedes models have them, and AMG can only change so much.

As I try to note every time I drive a Mercedes, twisting the end of the turn signal stalk is not the way to operate the wipers.

This just has to be a separate right-side steering column stalk so you don’t have to take your hand off the wheel rim to work it.

Of course, Mercedes already has the shift lever stalk there, but that is also in the wrong place.

Steering column stalks are for functions which you need to be able to access in a hurry. Typically, you use the shift lever twice in a drive — once to start the car, again when you shut it off. No need for it to be ‘handy’ at all

In fact, because it was so handy in the E 63, I accidentally hit it when upshifting with the paddle at full chat on the front straight on the race track, putting the transmission into neutral. Let’s hear it for rev limiters …

Nope; move the shift lever back to the centre console where it belongs and use that space for the wiper lever.

Also common with many Mercedes models, you can’t adjust the driver’s side-view mirror far enough out to eliminate the blind spot. Not as big a deal in Europe because they can have convex mirrors, which we can’t.

Sure, there is a ‘Blind Spot Warning System,’ but there is no need for that if you can adjust the mirrors correctly. Which you also can’t.

At night, accent lighting surrounds the cabin in a nice mauve glow (the colour may be changeable; we didn’t bother trying to find out). However, this light reflects in that side-view mirror, causing an annoying distraction.

Schoettle acknowledged this, so maybe it will be fixed before production starts next spring.

In sum, however, the Mercedes-AMG E 63 S 4MATIC+ vaults to the top step of the Super Sedan podium.

BMW is introducing a new 5 Series soon, there will be an M5 model, and that should be a lot of fun, too.

I just hate my job … 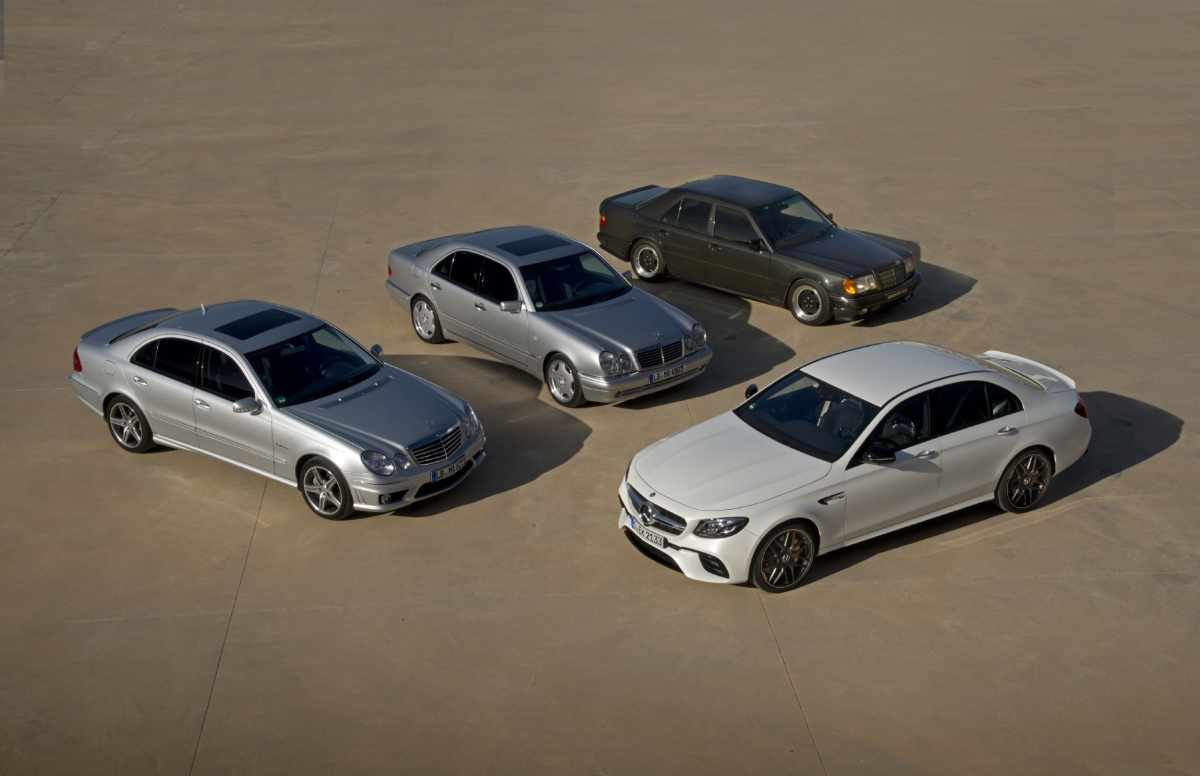 Two states of tune are offered, the base Mercedes-AMG E 63 with a mere 587 horsepower (using European-spec numbers here), and the E 63 S, the only one we’ll get in Canada, with 612 horsepower.