I have been waiting a few years to get my hands on a McLaren 650S spider and Tuesday this past week was the day I finally got behind the wheel.

It was worth the wait.

I will say from the off that I am a huge admirer of the McLaren Group. As a Formula 1 enthusiast I have watched the McLaren F1 team achieve many victories and world titles. McLarens foray into the automotive world began with the legendary three seater supercar—the F1—in 1993, which I saw for the first time at the Petersen Museum in LA this past March, and again it was worth the wait.

McLaren reintroduced themselves to the automotive world in 2011, this time as fully fledged manufacturer. It has been impressive to watch McLaren produce an array of spectacular supercars in five short years; the 12C, 12C spider; 650S, 650S spider, 675, 540, 570S, 570GT and the flagship of McLaren, the mighty P1 hypercar. So I was a rather eager bunny to get my paws on the McLaren 650S spider.

Life is very much about our own personal idiosyncrasies, and never more so than with cars. For some people technology fuels the spirit, for others, horsepower and zero to sixty times. As for me it comes down to these criteria: Design first and foremost; does the styling light a spark in my soul? Does the car put a smile on my face seeing it parked in my driveway? Next is the interior where I connect with the car through the steering wheel. BMW steering wheels for example are too thick for my preference, whereas the McLaren steering is nigh on a perfect grip size for me. The last criteria is handling and performance. In the real world most of us only get to experience the power of our cars in short bursts, primarily launching away from traffic lights, so low end torque is a more useful preference on my list. Horsepower is all relative as we have SUV’s now with five hundred and six hundred horsepower. I believe it is how that power is applied and how controllable it is that helps you interact with a car.

A Lamborghini Aventador gathers 700 horsepower for a moment then hurls you down the road, while a Tesla instantly spits you down the road with electric torque and zero lag time. Believe it or not I prefer driving the Tesla for that instant application of power, so much so that I don’t miss the engine noise.

Why the long ramble? Well I wanted to provide context for what moves me as a supercar enthusiast.

I have had the privilege to drive the McLaren 12C and the McLaren 570S and now the McLaren 650S spider. When the 12C first came out I was intrigued by its looks. Some Motoring Journalists decreed it was an amazing car, but somehow lacked soul, while customers complained about the front end design being too conservative and more importantly not as distinctive a look as a Ferrari or Lamborghini.

The result of this furor was the 650S sporting increased horsepower and a redesigned front-end which took its styling cues from the McLaren P1 hypercar. When I first saw pictures of the 650S I was not impressed, it looked like they simply copied the P1’s front nose minus the narwhale blow-holes. Even today I still appreciate the subtle front profile of the 12C, however I have come around to appreciating the 650S’ front end and arguably McLaren now has a distinctive look of its own to rival Ferrari and Lamborghini.

You may also like: Adventures in a Lamborghini Aventador Roadster 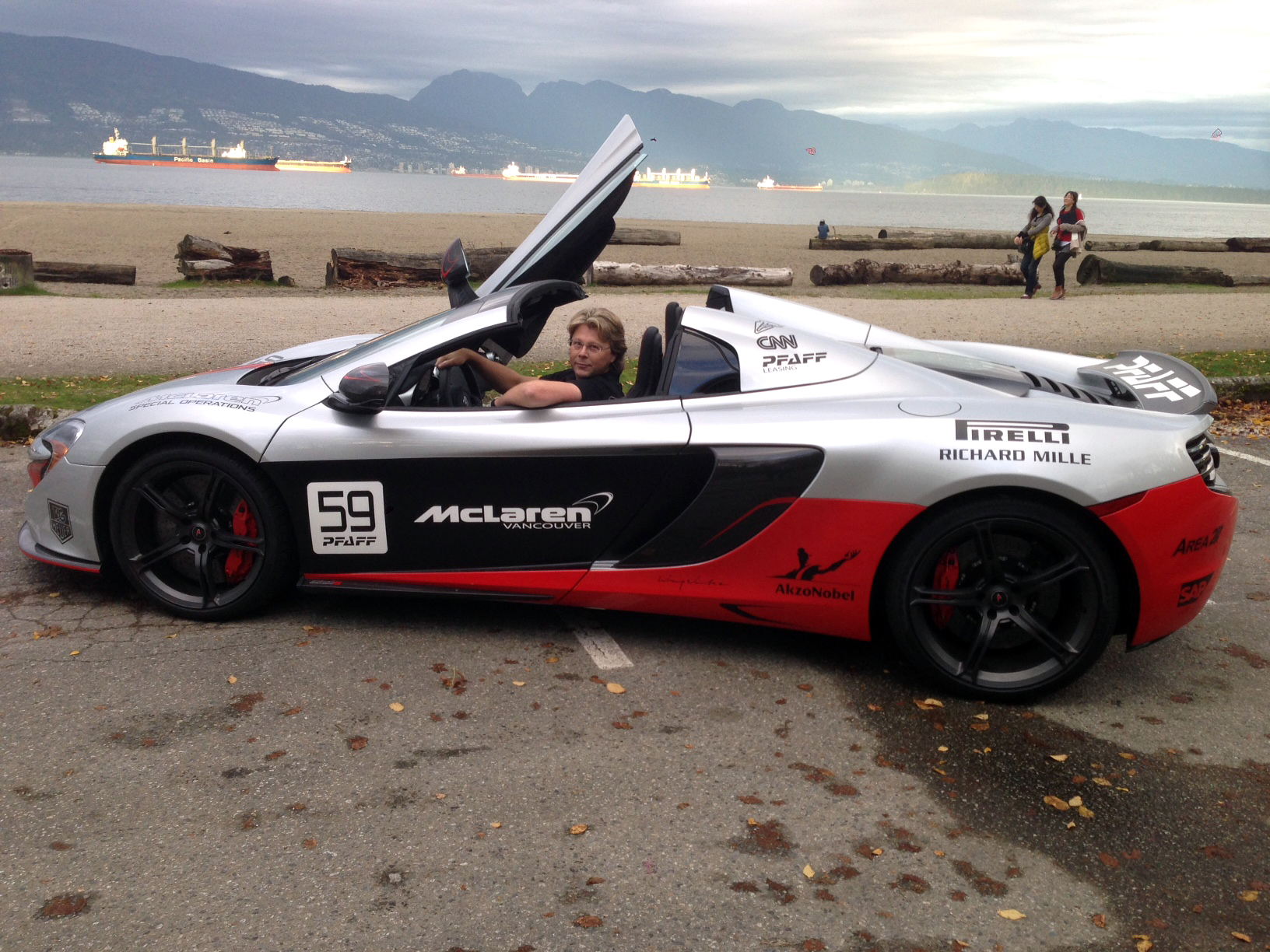 They say the devil is in the details and with McLaren this is true indeed. The entire ethos of the company is built upon it. A great deal of the credit for this must go to Ron Dennis—the CEO of McLaren Automotive. The home of McLaren is the McLaren Technology Centre or MTC which houses the McLaren F1 team and other McLaren companies. Firstly by design there is only one way in and out forcing McLaren employees to walk past the McLaren trophy cabinet which holds hundreds of McLaren trophies from all forms of motorsport. Formula 1, Le Mans, Indy car racing; the cabinet is a constant reminder of McLaren’s achievements. Thanks to different area air pressures circulating along the main boulevard of the MTC—there is no smell. No taking your lunch back to your office and smelling up the place for McLaren personnel.

If McLaren goes to all this effort for a building and their environment, what do they do for their road cars?

The man responsible for McLaren design is their director of design Frank Stephenson who I have had the distinct pleasure of meeting and speaking with twice, most recently in September.

A notable feature of Frank Stephenson’s designs is “biomimicry,” where he tries to find the principles in nature that makes products do what they do. Hearing this, one is tempted to pass this off as supercar marketing blather, however my McLaren guide from McLaren Vancouver, Wilson Ng, pointed out several features on the 650S spider which relate to this principle.

The engine lid is shaped like a manta ray, while the rear flanks mimic those of a Cheetah. The lights on the 650 resemble those of a Falcon, of course you might have to look a bit closer to fully appreciate these details. Easier to see is Frank Stephenson’s application of ratio of proportions, which always has an odd number. You can see this in the 5 small winglets on the arm of the side mirrors, to the 3 slats on the front of the 12C, to the 5 slats on the rear of the 650S. This principle is similar to what is used in the art world where the rule of thirds is much more pleasing to the eye. 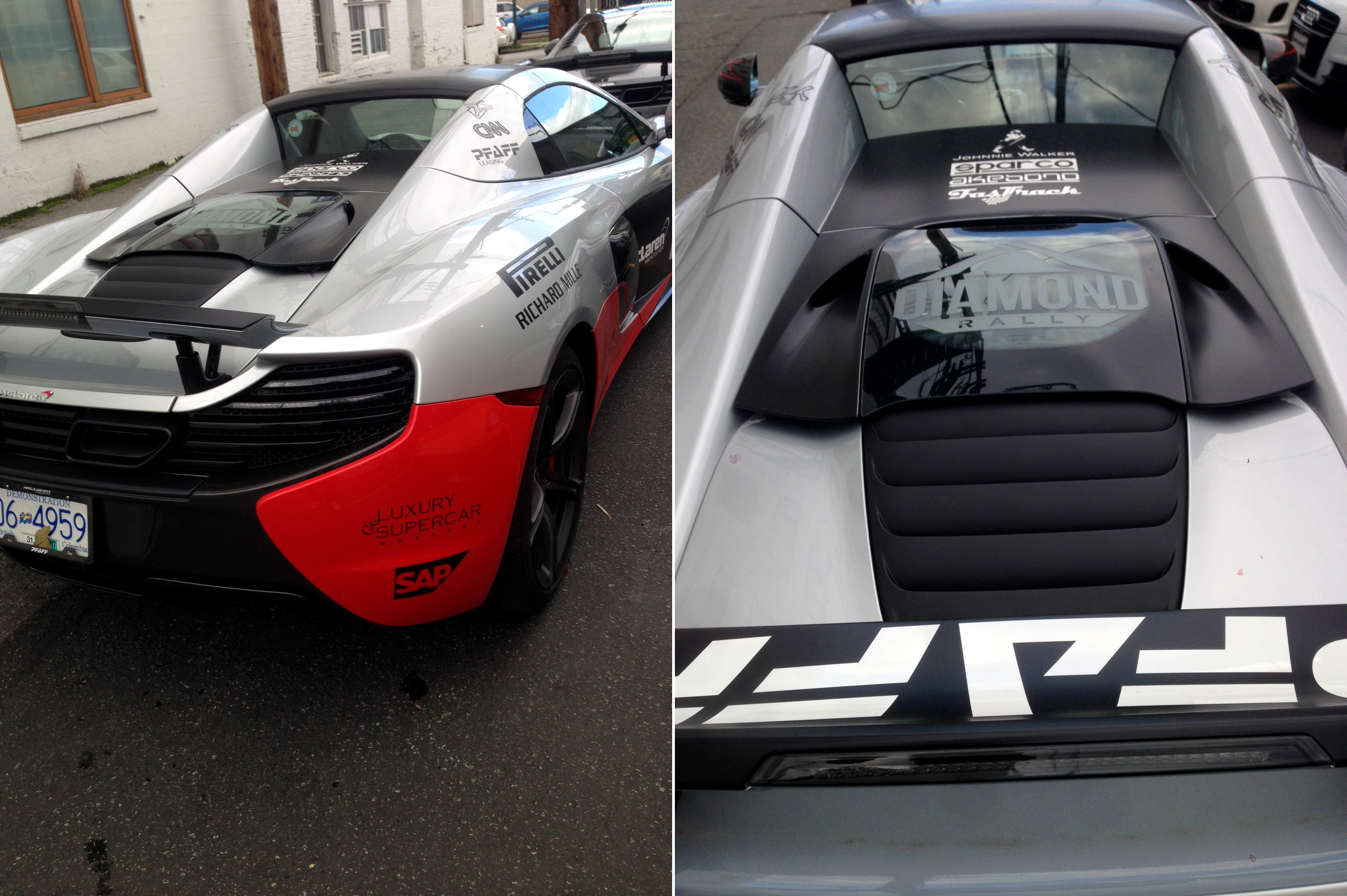 Stuff all the details man, what it like is to drive?

Swing open the butterfly doors, clamber over the wide sill of the carbon Monocell and you are in driving heaven. No plethora of buttons on the steering wheel, and its perfectly shaped courtesy of Formula 1 driver Lewis Hamilton. The view through the windscreen is wide with a sloping nose that provides perfect sight lines. Press the start button and the 3.8L twin turbo barks to life, then calms to a gentle burble. The 650S spider driven sedately is not a noisy supercar, however change the settings on the active dynamics panels and things get a whole lot more interesting.

Driving around Vancouver in the late afternoon in a McLaren 650S is not a taxing endeavour, you could do this all day and night if you so choose.

The 650S spider’s party piece is its retractable hard top roof. It really offers you the best of both worlds without any measurable compromise. The Monocell is so stiff that extra reinforcements are not required and performance remains virtually the same as the hard top. Spanish Banks is a particularly scenic drive with great views of Vancouver and the North Shore Mountains. It was appropriate to put the top down which you can do in 19 seconds while driving below 30km/h.

With the rear wind deflector raised and the heater on I was extremely comfortable driving only in my polo shirt (and jeans). The low front spoiler has a tendency to make a wee bit of contact on bumpy and uneven roads, but the protective coating eases the worry of doing damage to the carbon fiber splitter.

Slow stuff done, it was time to turn up the wick and engage the active dynamics panel located in the center console, which is easily accessible and even easier to use. The active dynamics comprise of settings to adjust the handling and powertrain. Each button has three settings, normal, sport and track. Turn the powertrain mode to sport and the ferocity of engine noise ramps up reminding you—in case you had dozed off—that you are in a supercar. In general with each change in mode, the 650S Spider’s handling becomes crisper and the suspension firmer, while also adjusting the engine mapping. This low end torque is highly engaging in an urban environment. We traversed the same bumpy road along Spanish Banks while in track mode and the ride was not as harsh as I had expected it to be. This is thanks to the McLaren’s adaptive damper suspension.

You may also like: The Ultimate Ferrari experience for the Ultimate Enthusiast 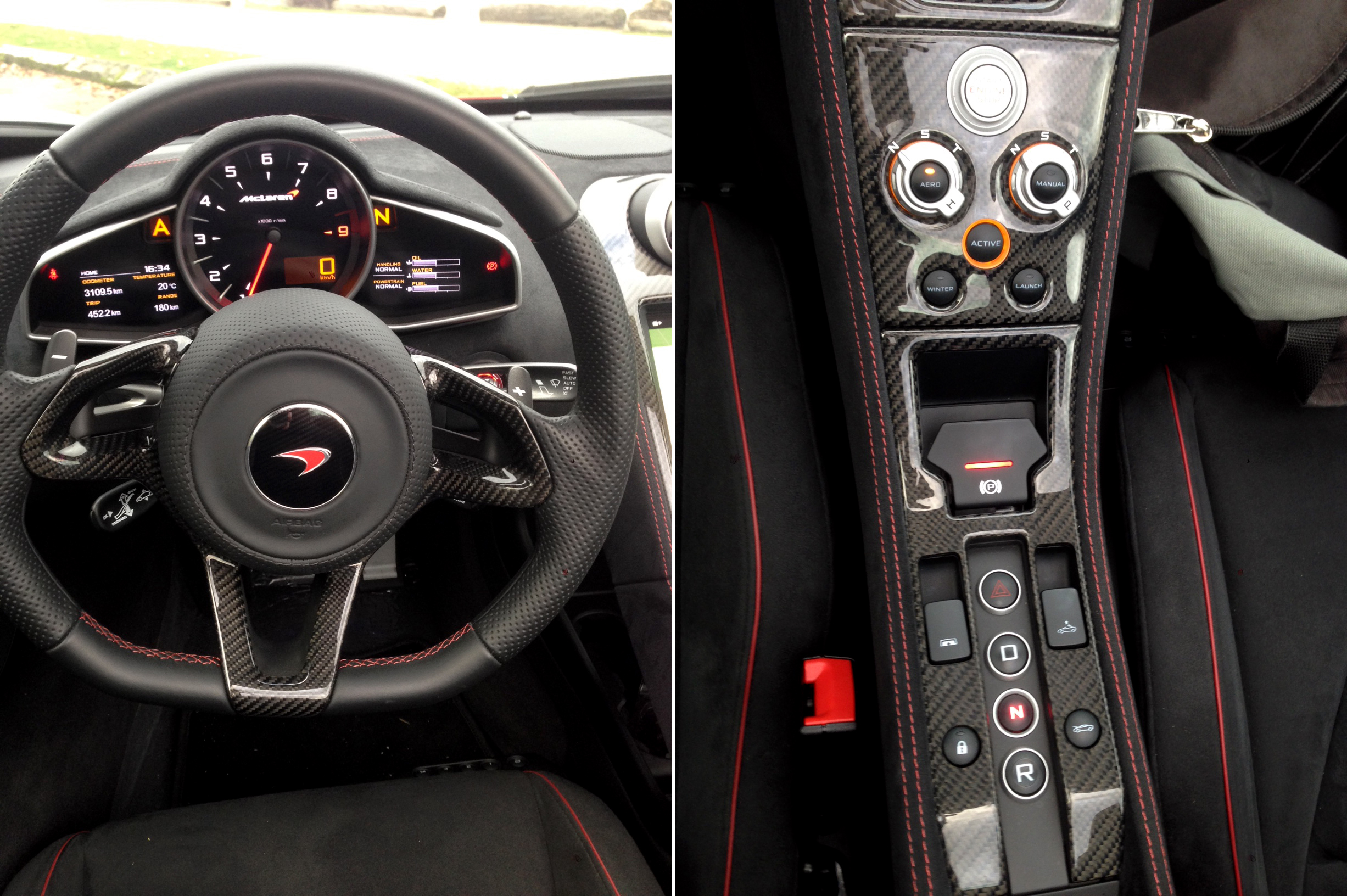 In short I find the McLaren almost the perfect supercar, an easy drive when you want, and a deployable and predictable speed demon when you need it to be. Ergonomically the controls fall easily to hand and are not overly complicated. I love the steering wheel, and I love the small carbon paddle shifters that enable manual gearshifts. Unlike the Ferrari 458 and 488 whose paddles turn with the steering, the McLaren’s remain fixed. The real genius of the McLaren paddles is their multi-function capability. You can pull the right paddle towards you for an upshift and use the left paddle for downshifts, or you can use one paddle to do both. McLaren will let you pull the paddle for an upshift and push away the same paddle for a downshift. It all comes down to your personal preference or you can just leave it in automatic. I prefer the pull and push manual method myself.

The truly frightening part about McLaren is that their cars only continue to get better. When I drove the 12C I could not really think of any major changes that were needed, the same goes for the 650S. I would say 650 horsepower is more than enough, however the development wheel keeps on turning and the successor to the 650S code named P14 will be with us next year at the Geneva Motor Show.

I saw some camouflaged spy photos, the biggest change will be engine displacement rising from 3.8Lto 4L and horsepower to over 700. Do we really need 700 plus horsepower? Probably not, but it is coming and I cannot wait to drive the P14, hopefully it won’t take so long this time. If you have not driven a McLaren and you have the opportunity I heartily recommend you do so. 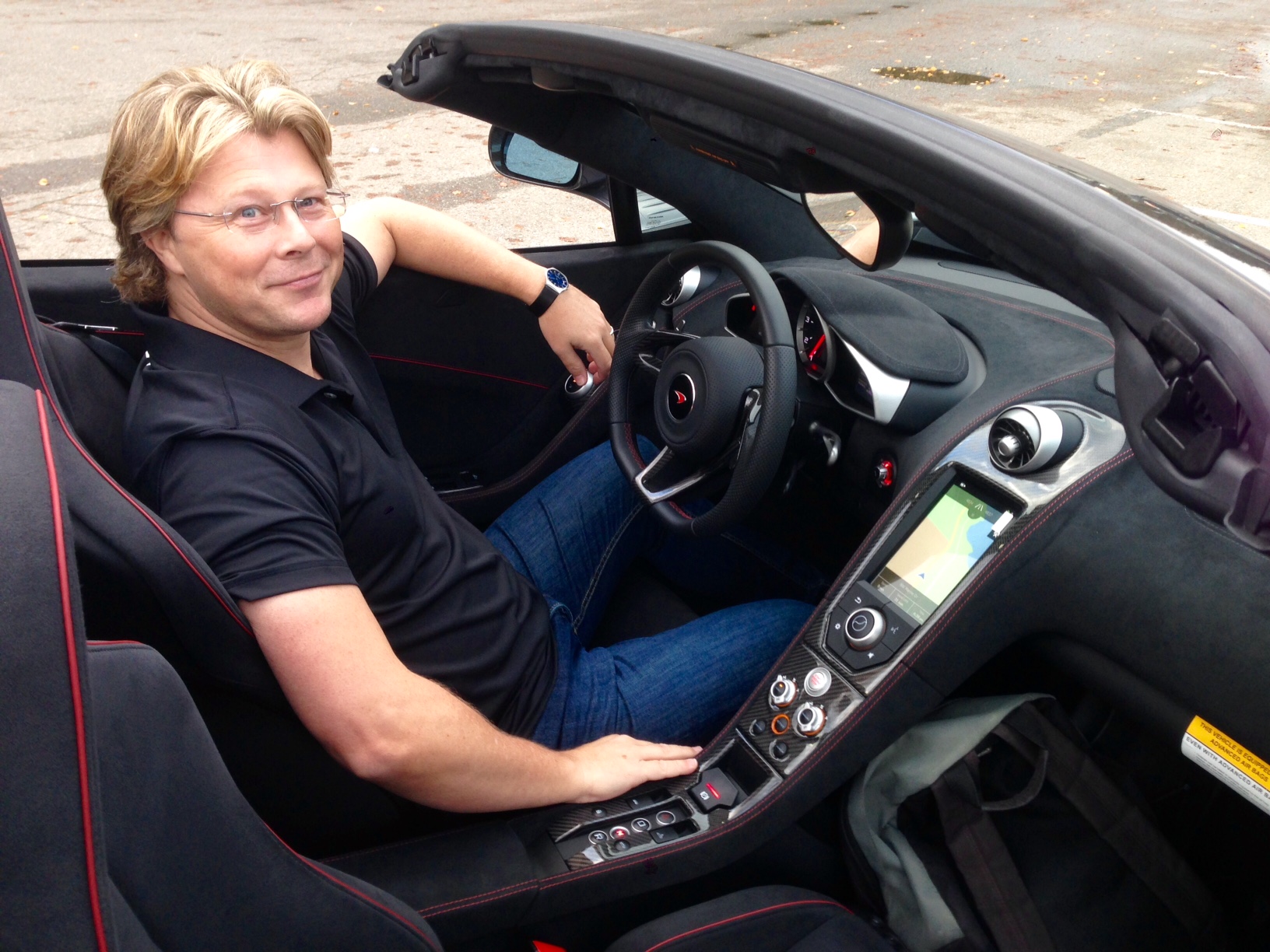 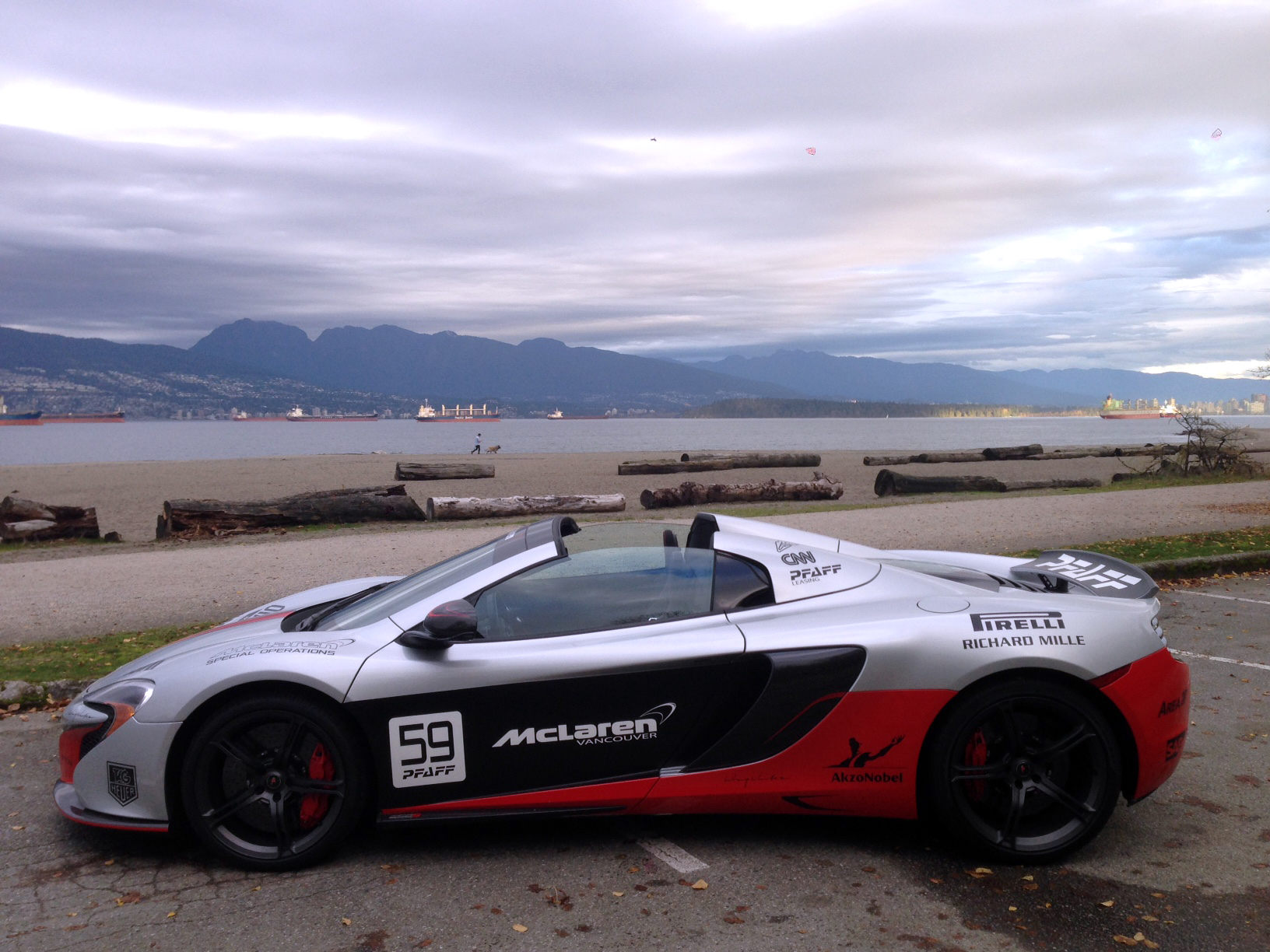 You may also like: Driving the magnificent Pagani Huayra