It’s a bit difficult to imagine that the McLaren 600LT is considered the “performance” variant of the McLaren line.

As if other McLarens just sit there and look pretty.

Not that they aren’t pretty — this car has generated more eyeball hernias than any in recent memory.

Equipped with a host of go-faster-and-look-better options, my tester topped out at $367,360.

The LT stands for “Long Tail,” or “Longtail” — McLaren prefers to condense it into a single word.

This historic designation dates back to McLaren’s Le Mans successes in the mid-1990s, and indicates this model has extra aerodynamic aids front and rear to increase downforce by some 100 kilograms at 250 km/h, making the car stick to the road like peanut butter to the roof of your mouth.

The current LT isn’t all that much longer-tailed than other McLarens — a few centimetres front and rear. But the intent — extra grip — is the same.

The rest of the bodywork appears to have been shrink-wrapped around the mechanical bits, again to reduce aerodynamic drag.

Among other things, this means exhaust pipes that exit pretty much right onto the rear wing, which gets a special surface treatment to protect it against the ultra-high heat.

Because the tailpipes aren’t hiding under the car, anybody you pass will know they’ve been passed.

And you will be passing just about everybody.

This model also loses about 100 kg in weight, getting down to as low as 1,247 kg. This thanks to things like thinner door glass — glass is heavy! — and a host of gram-reducing trickery, including lighter suspension components that also react more quickly to road irregularities.

Road irregularities? In Ontario? Hard to imagine, I know.

My tester was the Spider, hence convertible model, adding about 50 kg up top, which, from a dynamics perspective, is not where you want extra weight.

But it’s worth it on those nice days. 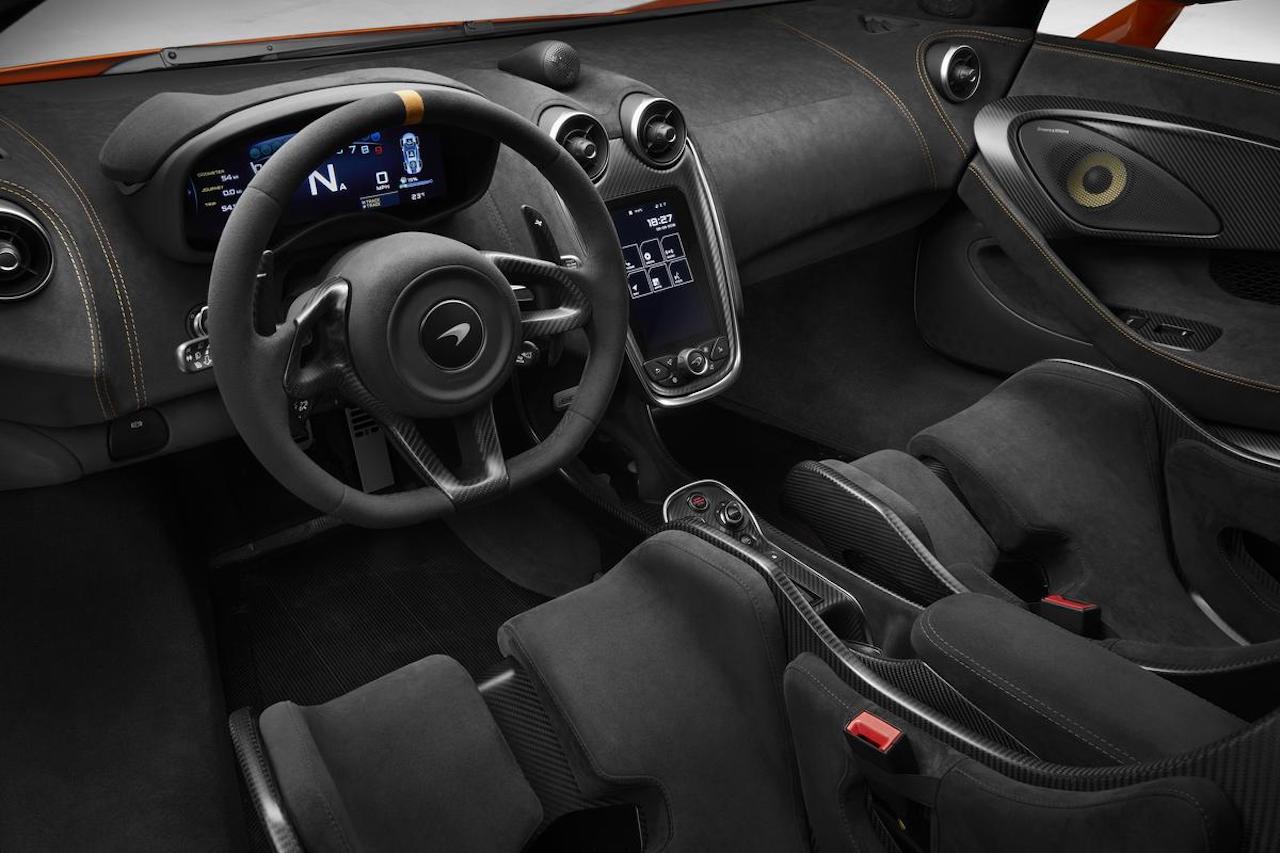 And because all of the McLaren’s strength is in the “tub” of the body, chopping the roof off does not detract from the car’s rigidity. It feels like it’s been carved from a solid billet of steel.

My test car had air conditioning, which is a no-cost option because some people want their McLarens for track purposes and don’t want the extra weight.

My car was even lighter thanks to the superlightweight carbon-fibre racing seats developed for the McLaren Senna.

Getting in and out of this car is a challenge for the dexterity-disadvantaged. I ended up bruised head to toe after a few days of driving.

You don’t so much get into these seats as you put them on.

If you don’t fit, go on a diet, or find something else to drive.

The armrest on the driver’s door seemed to have a particular fondness for my left elbow, so keep those arms snug to your body when you’re pressing on.

Speaking of the car’s habitability, one odd thing — the luggage compartment lid at the front of the car does not have a safety catch on it. Pop the release catch, and it’s free to open. You don’t want to hit that control at speed or you’ll have an impromptu air brake …

Ingress and egress is a lot easier with the power roof folded — it takes about 15 seconds, but it can be done at speeds up to about 40 km/h. So, you could drop the top, get in, drive off and put the roof back up as you go.

Very Hollywood. Still, not a good idea, because you’ll be without rearward visibility for about half that time.

Not that anybody is likely to be catching up to you.

You have a halfway option — with the top up and the rear window rolled down you have a front-row seat to the exhaust symphony behind you.

The cockpit — no other word truly fits — takes some acclimatization. The controls all fall readily to hand because there is no other place for them to fall.

There is a smallish central screen in portrait orientation (taller than it is wide), which is maybe a couple of iterations behind state-of-the-art. Among other things, it is not a touchscreen; you have to learn which buttons to push.

It has a distant relationship to the Nissan V8 originally developed a decade ago by Tom Walkinshaw Racing for (but never run at) Indianapolis. It has been re-engineered over the years to be pretty much its own engine.

It is mated to a seven-speed dual-clutch manumatic transmission.

The 600 in this car’s model designation stands for horsepower. More accurately, “pferdestärken,” the German word for the metric almost-equivalent, hence the short form “PS.”

Pferdestärken are a bit smaller than our horsepower, hence there are slightly more of them, so the car develops 592 of our horsepower at a lusty 7,500 r.p.m.

These numbers should not lead you to believe the car just sits there until the engine is revving its lungs out.

True, there is a bit of turbo lag, if you can use such a term for a car that can launch from rest to 100 km/h in under three seconds.

And it’s just gathering up its metaphorical skirts at that point, on its way to a theoretical (at least in my hands) top end of some 320 km/h.

A variety of drive modes for both engine and suspension are available to you, with what seemed to be a greater variation between them than most such systems offer. “Normal,” “Sport” and “Track” are pretty much self-explanatory.

Drive it gently in the mostly benign settings and the car feels downright pussy-cattish. The transmission will upshift at around 1,500 r.p.m. all the way up into seventh gear, and it feels as docile as you like.

Crank up the go-faster dials, and all hell breaks loose.

Throttle response is immediate, and the transmission will stay in whichever gear you have chosen until you hit the stick or work the steering wheel paddles.

Which have an interesting feature. They aren’t really “paddles” plural, but a single component hinged within the steering wheel housing. You can pull back on the right one to upshift, or push forward on the left one to do the same thing.

Not sure what the benefit might be, but knowing McLaren’s attention to detail, there must be a reason.

Handling is as precise as any car I can recall. It’s downright telepathic.

Yet it never felt darty. It’s a new definition of “precise.”

As noted, I kept it in Normal mode most of the time.

Maybe on a track I’d want something stiffer? I would be more that willing to give it a try if McLaren could just set that up for me.

As it stands, the McLaren 600LT convertible is a street-able super-sports car that has to rank right at the head of its small, ultra-exclusive class.