Recently, The Garage began offering complete packages that transform an F-250 into something wild - and definitely not available at your local Ford dealer.

Consider for a moment the countless Ford and Lincoln crossovers produced here in Canada, never mind the Ford GT, which is perhaps the most technologically advanced supercar available today, it should come as no surprise that the aftermarket is just as vibrant.

MBRP is one of the leaders in aftermarket performance exhausts and is quietly based in Huntsville, Ontario, and with the success of their business, their interest in serving the aftermarket has grown, as well.

On the same site as MBRP’s manufacturing facility, these madmen of speed have established The Garage to serve customers by supplying and installing aftermarket parts and services. Of course, trucks are a massive segment in the aftermarket, but also rather popular in the Muskoka region of Ontario, so it’s only natural that The Garage specializes in pickups.

Recently, The Garage began offering complete packages that transform an F-250 into something wild – and definitely not available at your local Ford dealer. Visually, the SuperRaptor and MegaRaptor resemble the notorious F-150 Raptor, but in reality they are the bigger brothers that Ford never offered.

Until MBRP invited me to drive these trucks, I had no idea they even existed, although with the popularity of trucks, they shouldn’t be a surprise. Still, I wonder who buys these F-250 monsters. 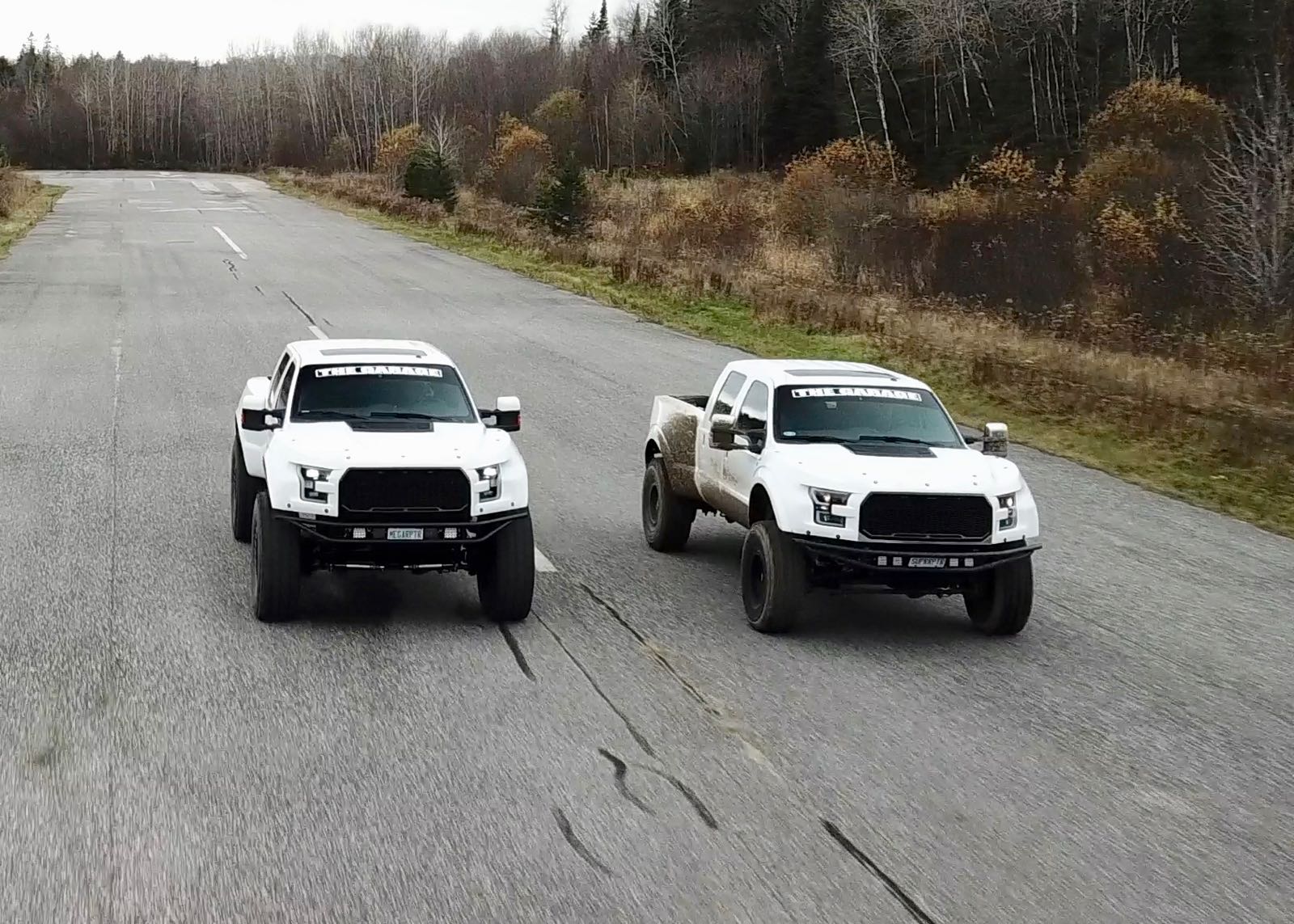 Martin Barkey, MBRP’s CEO, says, “Our customers range from businessmen to just truck enthusiasts, diesel enthusiasts. Long and short of it is, basically the truck scene is at an all-time high. Bigger is better. Diesels are the new hotrods, basically. The Mega and the Super that we build here based on an F-250 pickup truck, they just give the truck enthusiasts something different.”

“We’ve built and shipped five of these so far. Right now if you were to place an order for a Mega or a Super, you’d have number six in all of Canada. It gives you, as an owner, an exclusivity. Lots of guys have Ferraris, lots of guys have Porsches, lots of guys have Jeeps, whatever may turn your crank or whatever you may like, but not a lot of people have an F-250 based Super or MegaRaptor. Just unique and based on F250s. Gives you the dependability and reliability of a diesel, but still gives you the opportunity to hotrod, or off-road, or whatever may be your gig.”

Starting with the right specification F-250 – 6.7-litre PowerStroke diesel, four wheel-drive, crew cab, short box – these tuned trucks have a presence unlike anything else on the road. That’s right, these things are F-250s and they are diesel powered, which is something you can’t get with a factory built F-150 Raptor.

When your eye catches the SuperRaptor and MegaRaptor, you recognize the Raptor design, but something doesn’t seem right. Indeed, they’re scaled up iterations of the Ford off-roader you know and love, but they’re larger in every dimension.

The SuperRaptor is massively fun to drive and does everything a four-wheel drive truck is supposed to do, but yet it’s a big F-250 with a diesel, not an F-150 lightweight. The Super starts with custom Raptor-inspired bodywork, as well as custom bumpers and lighting, perfect for the country. Pure Performance supplies the four-and-a-half inch lift, Yukon does the 4.88 gears with a locker, wheels are the good looking seventeen-inch Robby Gordon KMC’s, tires are forty-inch Nitto Trail Grabbers, and like the Mega, there’s a K&N intake, an MBRP exhaust and Line-X in the bed from The Garage.

The SuperRaptor in an all-around excellent execution of a tuned F-250 that just about does everything. I’m jumping it, crawling up and down rocks with it, and generally enjoying it everywhere. Plus, it’s comfortable on the road, it’ll tow a literal boatload or three, and it’s relatively maneuverable around town.

More livable and much more drivable in both real world and off-road conditions, the SuperRaptor is too much fun to drive. Unlike the MegaRaptor, you can definitely daily drive a Super.

The reality is that the MegaRaptor, with its five-inch lift and the massive forty-six-inch Michelin military tires, is a bit of a novelty and more of a show truck. To get a sense of scale, have a look at the MegaRaptor parked beside the Chevy Colorado ZR2 that we recently tested. The Chevy looks like a toy in comparison. 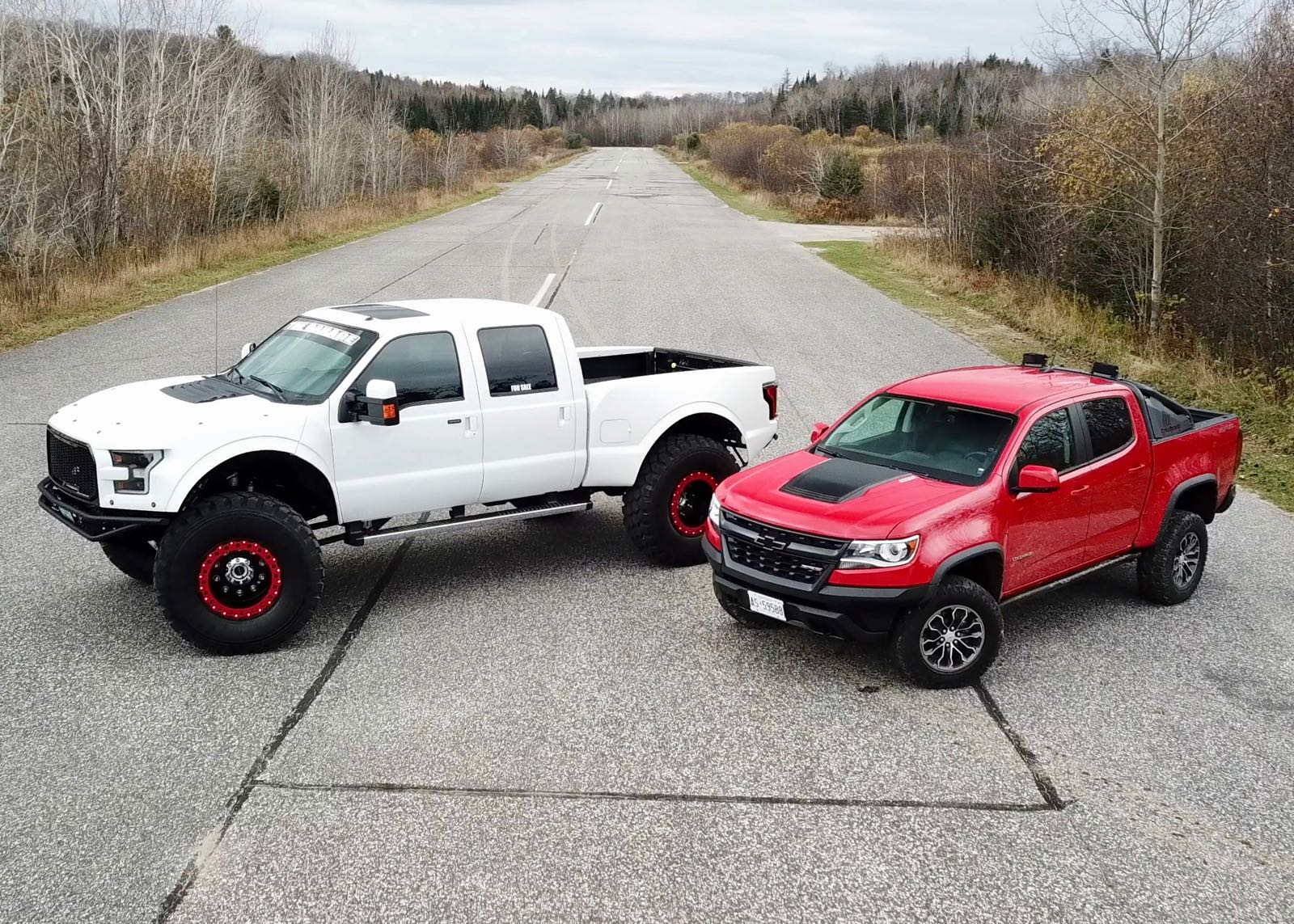 Simply by looking at the MegaRaptor, it should be obvious that it’s completely over the top. Like the Super, the Mega’s bodywork resembles that of the F-150 Raptor, though the fenders are big enough to accommodate those crazy forty-six-inch tires.

The MegaRaptor’s five-inch lift kit is from off-road specialist ICON. ICON also supplies the dual steering stabilizers, which are definitely needed to manage the wheel-tire package that weighs in around two hundred pounds each. Talk about unsprung weight here. It’s also got 4.88 Yukon gears instead of the stock F-250 bits.

Among other things, there are custom bumpers and lighting, a K&N intake, an MBRP exhaust, and The Garage does the bed in Line-X, which is typically more durable than an OEM liner.

Driving it is really something else and it’s definitely more show than anything else. Climbing up into it is like scaling a building and you can really feel the mass of those wheels and tires. Nimble it’s not, but it looks like nothing else on the road. I think it redefines road presence. Like Barkey says, it’s a great promotional vehicle because nobody’s really seen anything like it. 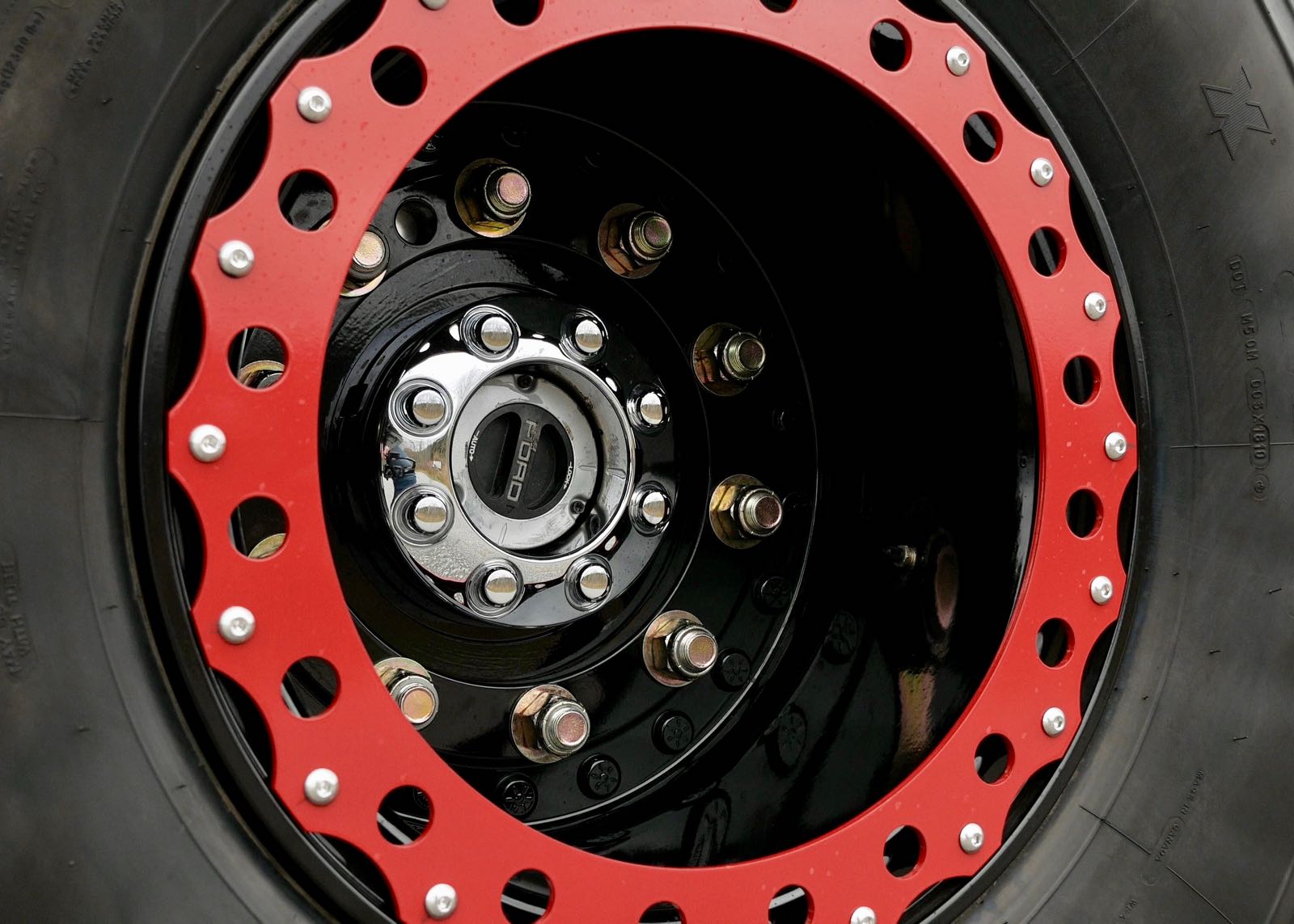 All of this crazy pickup goodness comes at a price and although there are base packages for both trucks, The Garage’s customers are spending a little more. Barkey says, “A Super, sitting on forty-inch tires, the conversion starts at around $35,000 Canadian. That gets you everything you see basically. Now, this particular one has upgraded bumpers, upgraded lights, and a few other things on it, but it gets you the KMC wheels, gets you the Nitto tires, gets you the four-inch suspension, and away we go.”

“The Mega is about a $40,000 starting conversion price and it gets you all the same things, so five-inch suspension, but it’s sitting on military wheels and forty-six-inch tires as opposed to forty-inch tires. In the end, a $35,000 or $40,000 base, you could drive down the road – you’re good to go.  But a lot of our customers will end up spending maybe another $5,000 to $10,000, or maybe a little more depending on my customer base at the particular time. But $35,000 and $40,000 will get you started and really like any truck build, let alone a diesel truck build, the sky is the limit.”

My favourite of these two, clearly the SuperRaptor, is easy to live with in the big open spaces this part of the world provides. In fact, it’s probably right sized for the Muskoka region. If you live in a place like this, I can see how desirable a SuperRaptor is and if I lived there, I could see one sitting in my driveway. 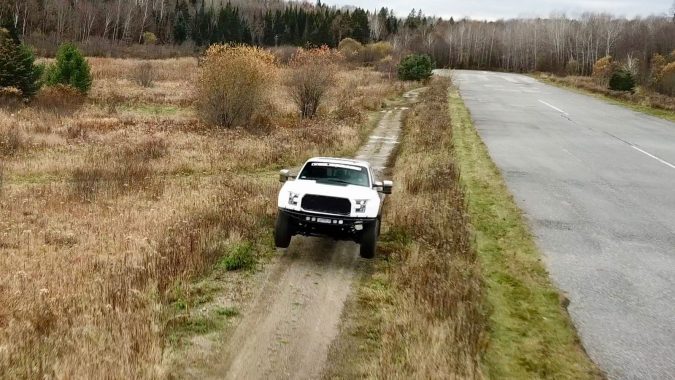 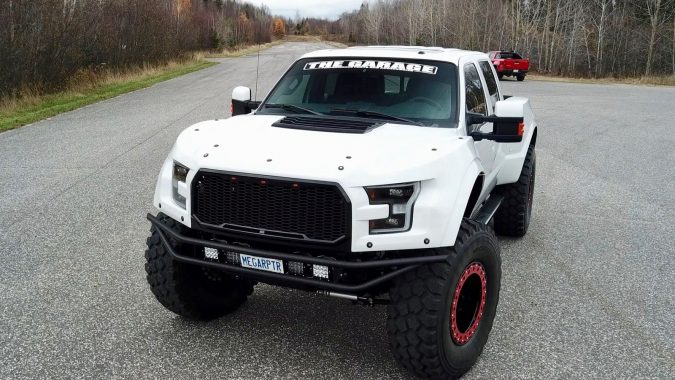 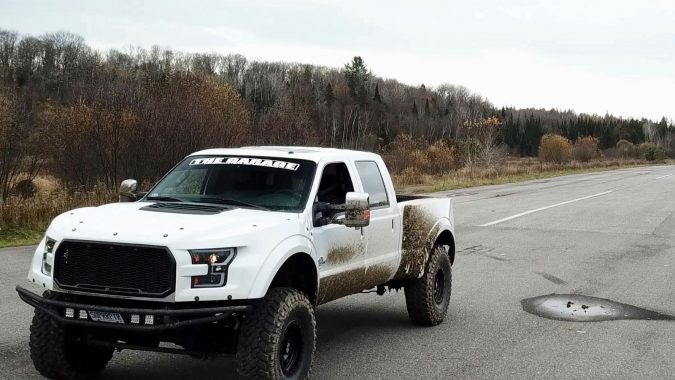 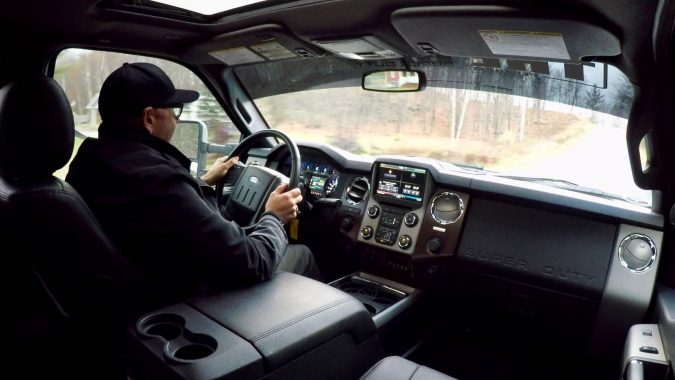 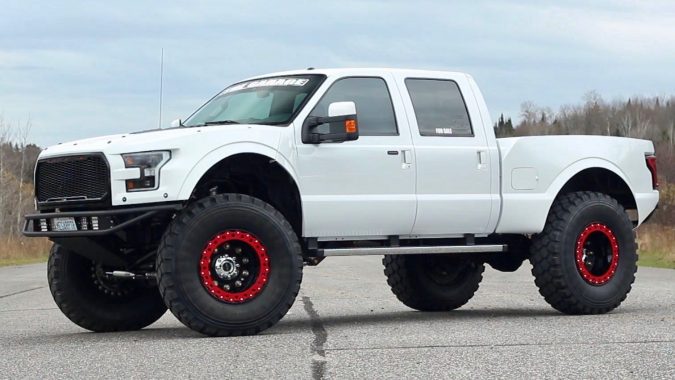 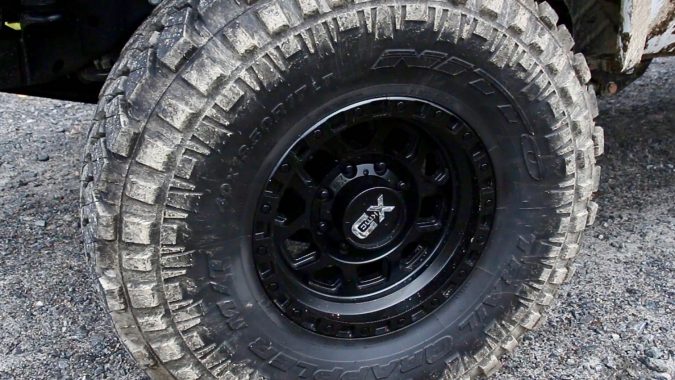 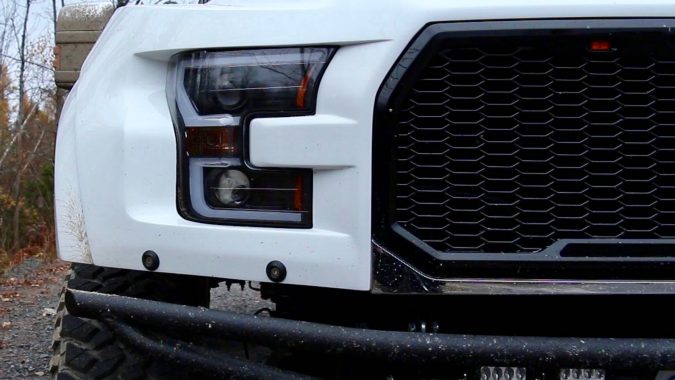 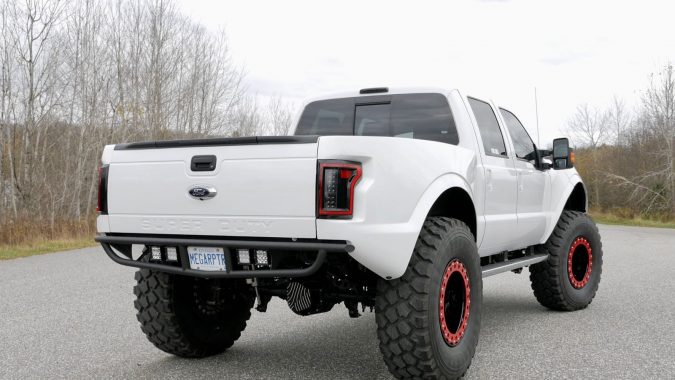 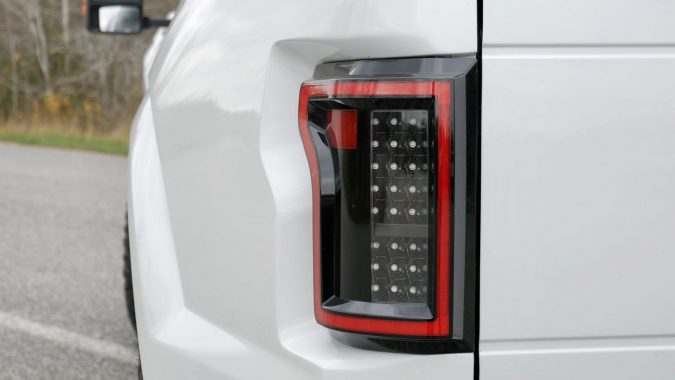 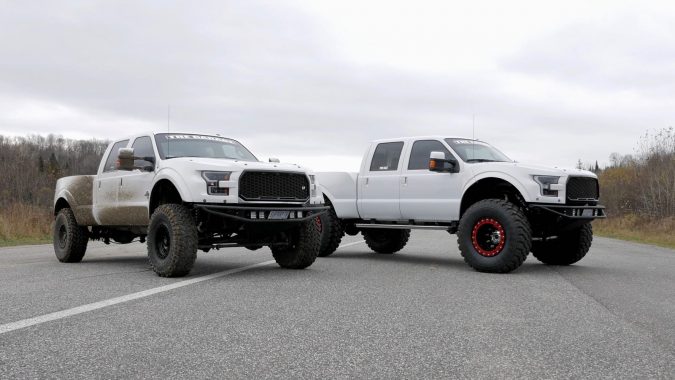 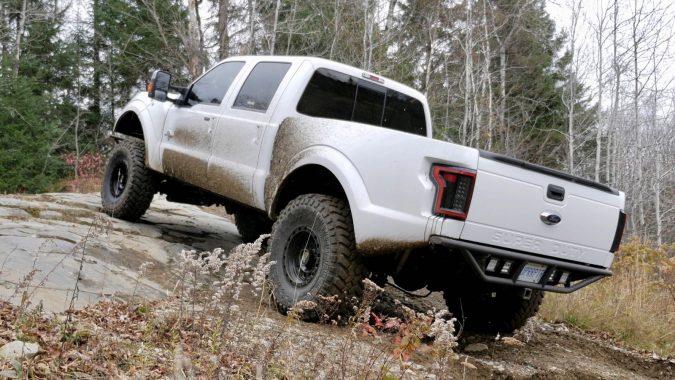