The result is a roof panel that collapses in and back and then down into the meager area where the convertible top would normally go, leaving two rather large flying buttresses on either side that support the roof when it is erect.

SAN DIEGO, CA: Mazda’s long-time slogan is “Spirit of a Sportscar” and that certainly applies to the 2017 MX-5 RF (Retractable Fastback).

In the automotive scheme of things, Mazda is a small manufacturer, but with a history of innovation such as being the only company to master the Wankel-Rotary engine or, more recently, developing the Skyactiv fuel efficiency technology that is as frugal as a hybrid but without the weight, price and complexity.

And, when you look at it, the MX-5 two-seat small sportscar is just as innovative because, not only is Mazda the one automaker in the world to make an affordable sportster, but the MX-5/Miata has become one of the largest selling sportscars of all time — with no signs of sales weakening.

Now in its fourth generation, the MX-5 (they don’t call it Miata anymore, but I do) is much different looking from the spunky little first generation that bowed in 1990.

It is more Italianate in appearance, but the spirit is still all there ready to go and ready to please. 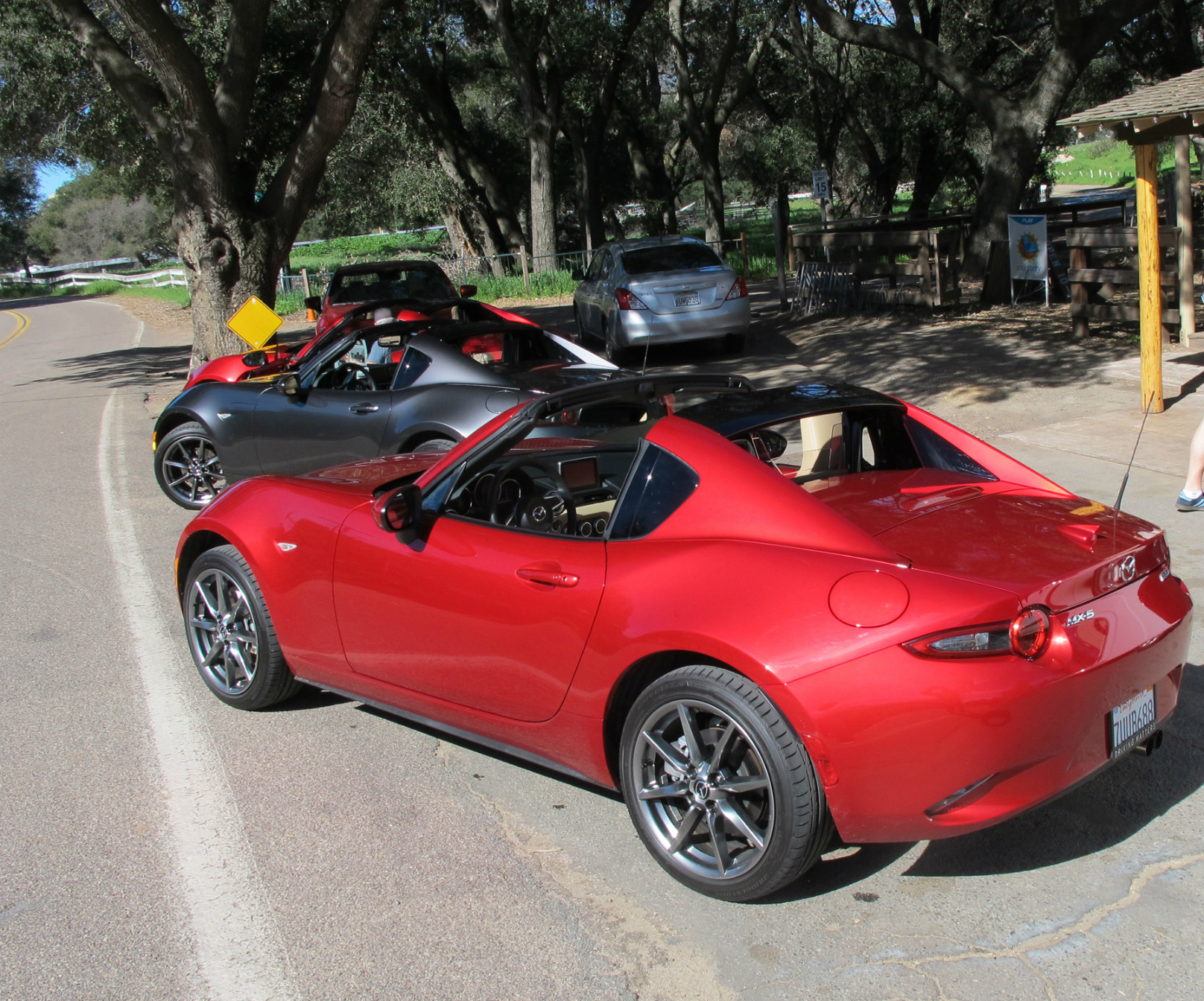 And an innovation on an innovation was the retractable metal hardtop available on the second and third generation Miatas, which turned it into an all-weather sportscar.

The folding metal top proved so popular, it now accounts for some 40 per cent of MX-5 sales – a number not to be ignored.

But there was a problem.

The new MX-5 under the skin is a vastly different car in terms of architecture, which ruled out any kind of folding metal top, which would have taken up most of what little trunk room there is. 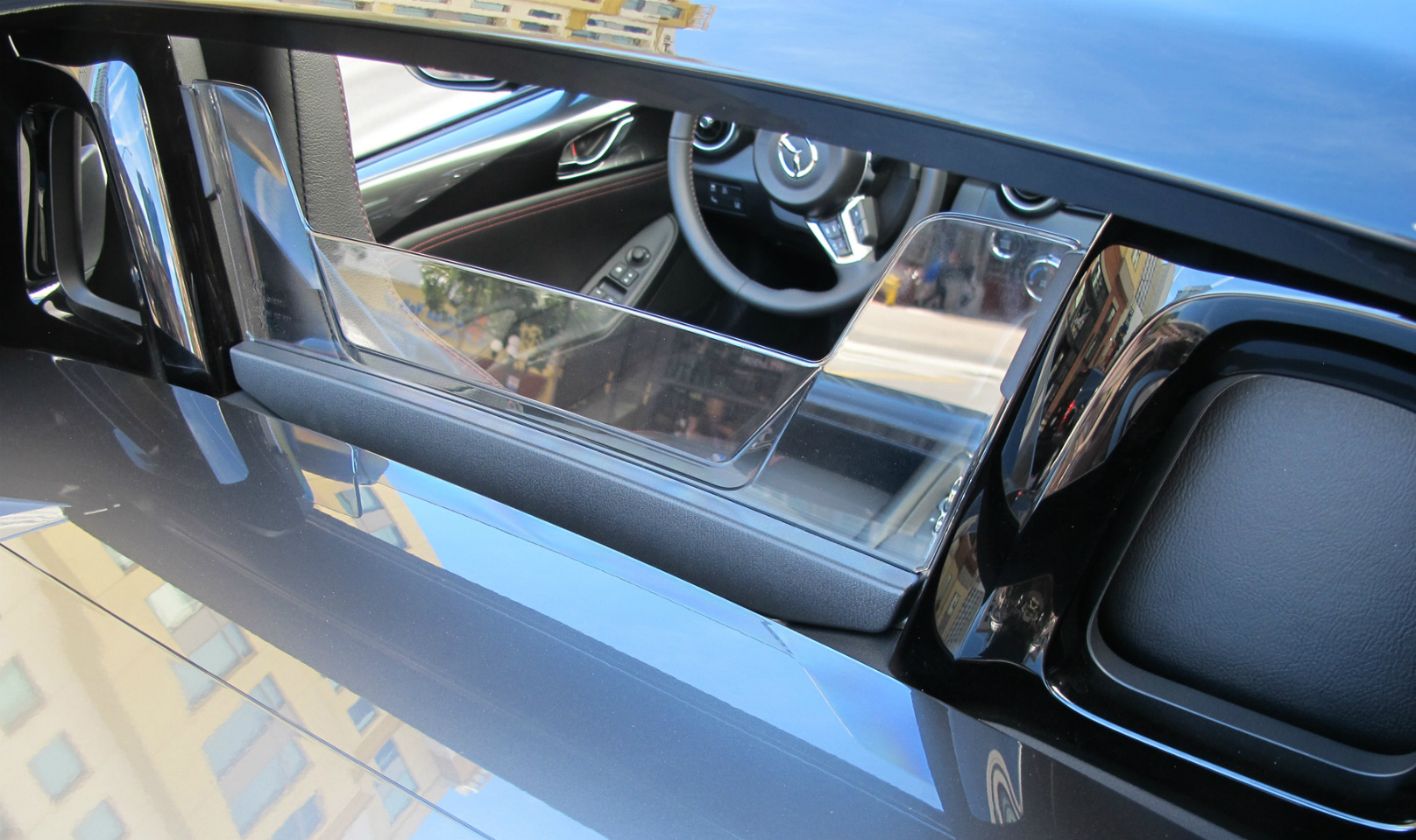 At the press launch of the RF in San Diego, Mazda North America design chief Ken Saward, who penned the current MX-5, said the conundrum of where to stow a solid roof was turned over to the engineers, many of whom Saward noted have high-end watches and “are fascinated with mechanisms.”

The result is a roof panel that collapses in and back and then down into the meager area where the convertible top would normally go, leaving two rather large flying buttresses on either side that support the roof when it is erect.

The whole thing takes about 13 seconds to go up or down with a touch of a toggle on the centre stack.

There are two RF trim levels, the GS ($38,800) and the GT ($42,200) with a six-speed manual transmission standard and a six-speed automatic that is a no-charge option.

But for those who understand what a sportscar should be, it’s almost as if Mazda is driving buyers to choose the manual. 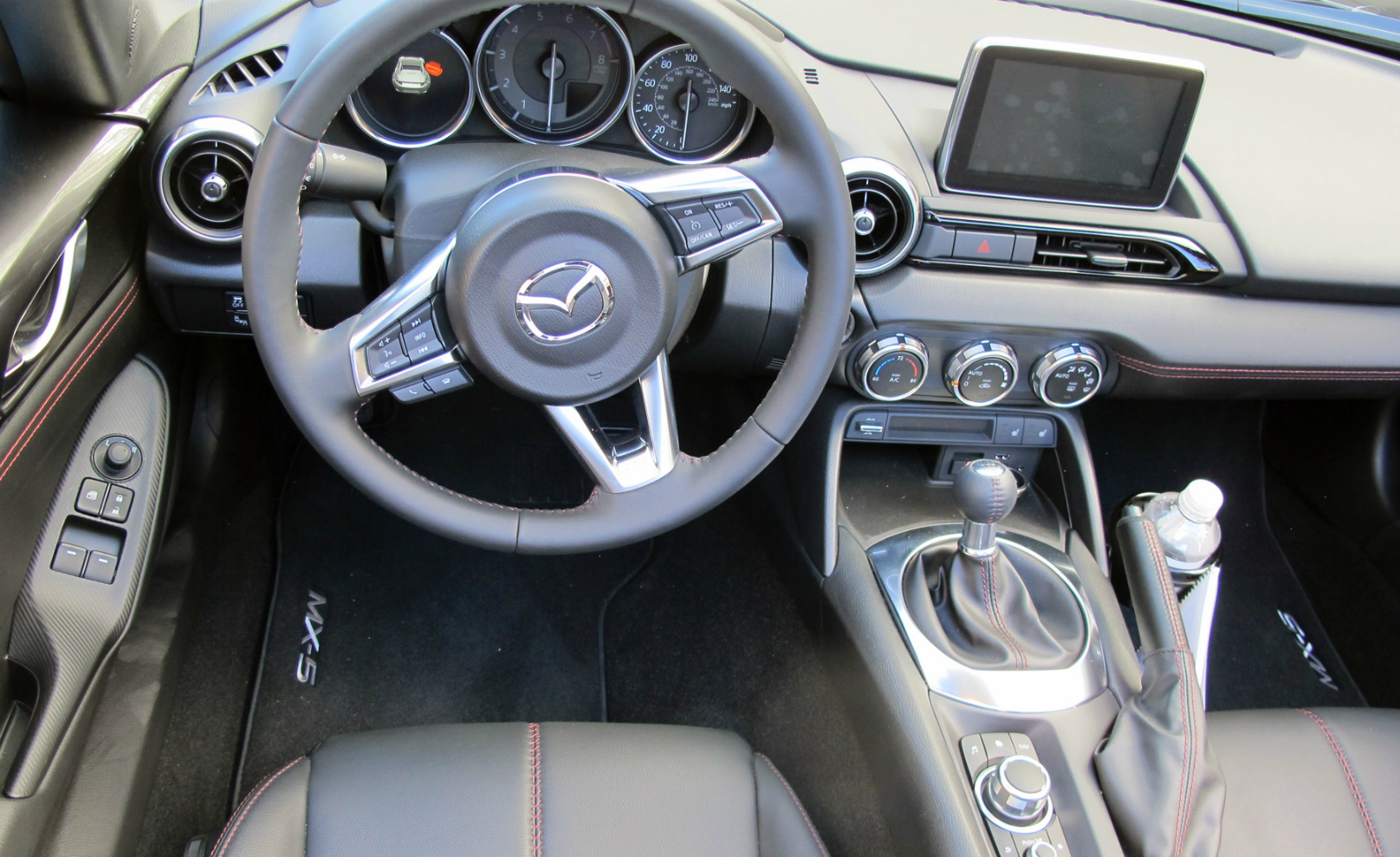 On the inside, a navigation system is standard, as is a seven-inch color centre stack touchscreen with Mazda Connect through the standard centre console mounted human machine interface (HMI) with rotary access knob.

The drivetrain is the same as everyday Miatas, with a 2.0-litre direct injection inline Skyactiv four-cylinder producing 155 hp and 148 lb/ft of torque.

Trunk space is naturally limited to 127 litres. There is no spare tire, but an inflator kit in the trunk augmented by a standard tire pressure monitoring system to alert the driver if a tire is going down. 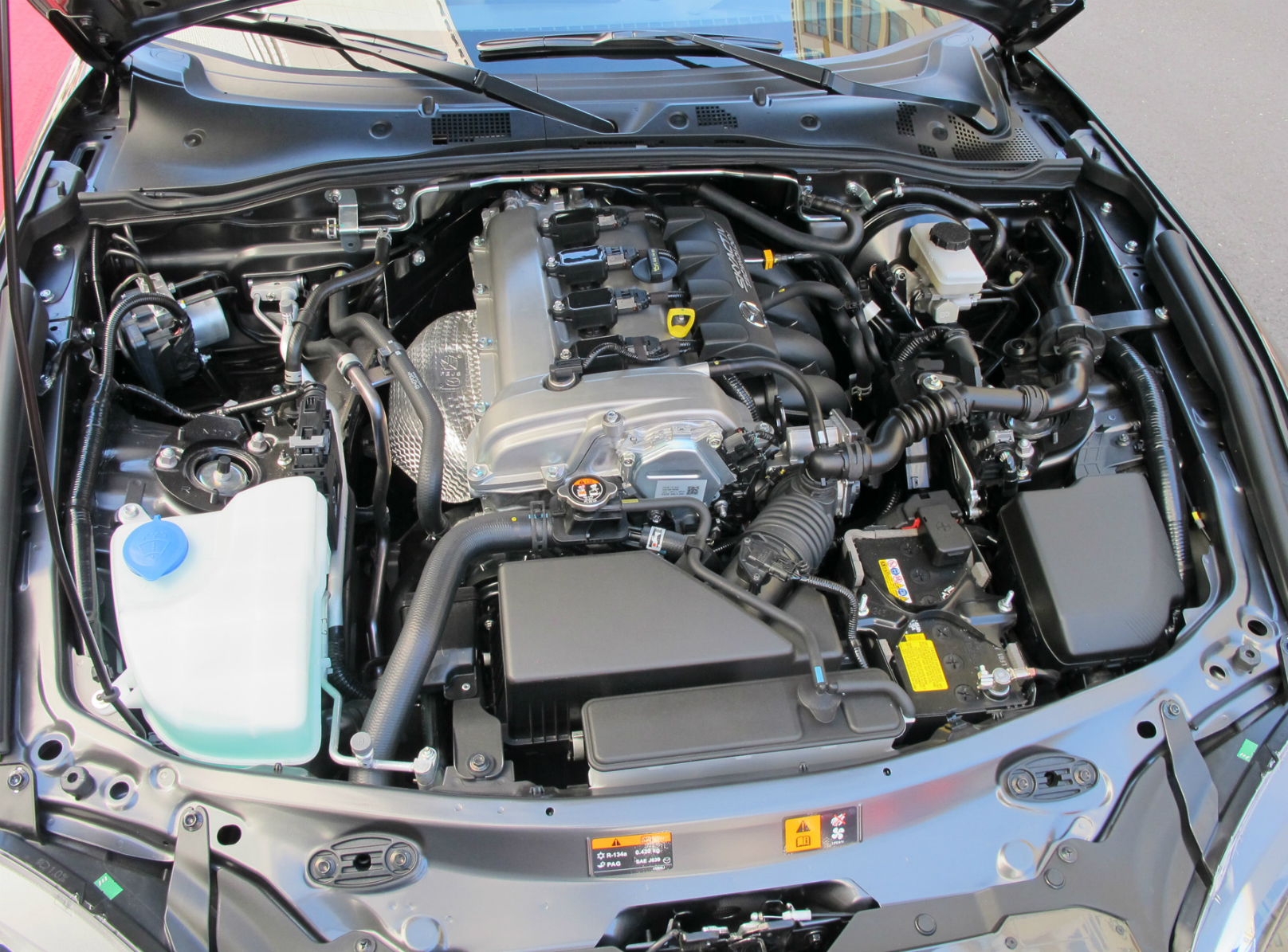 One could not have asked for a better venue to introduce the RF than San Diego and its many hilly routes going out to the east in sunny skies and 22 degree Celsius temperatures.

My co-driver owns a pristine 2008 Miata and is very familiar with its habits, so he put on a driving display with the RF, rarely touching the brakes but using the gears and engine braking to the full for a most entertaining ride for me.

I sensed the extra 200 lb of the folding top over the rear wheels plus the limited slip diff made the RF a tad more stable in high-G corners.

I was nowhere near as smooth, but I managed to make the most of the gear changes that remain as light and positive in engagement as they were back in 1990, with a clutch to match.

After my stint at the wheel, I got out with a big smile on my face.

And that’s what the MX-5 does. It puts the joy into just going someplace – anyplace – just for the heck of it. 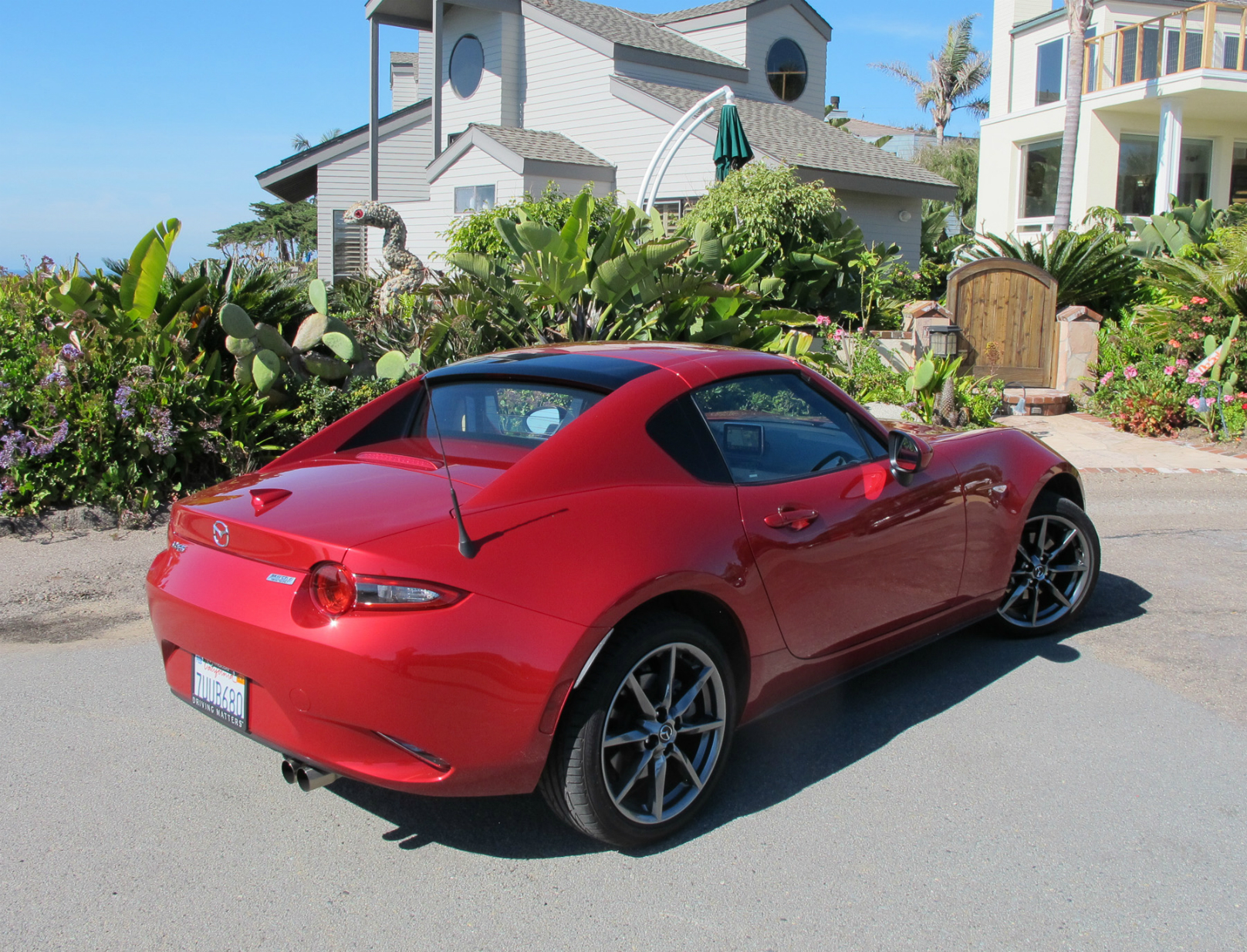