Maserati brings the drama with the 2017 Quattroporte

A new interior and a sportier presence has it stand up to the competition in the luxury car segment.

PALERMO, ITALY – If an English-language car company — say, Cadillac, Lincoln or Jaguar — labelled their range-topping flagship simply ‘Four Door,’ it wouldn’t really imply the status such a car would deserve.

In Italian, however, it sounds suitably impressive.

Hence, Maserati Quattroporte (kwa-trow-POR-tay), a label which has adorned the Italian company’s big sedan for six generations now — starting in 1963.

It’s really a face-and-tail lift of the previous car; the sheet metal stays the same.

Revised grilles (differing slightly, depending on trim level), air scoops, fascias, and front and rear and taillights highlight the exterior changes, designed to give the car a more commanding and sportier presence.

Maserati uses the word ‘squalo’ — Italian for shark — to describe that new nose. 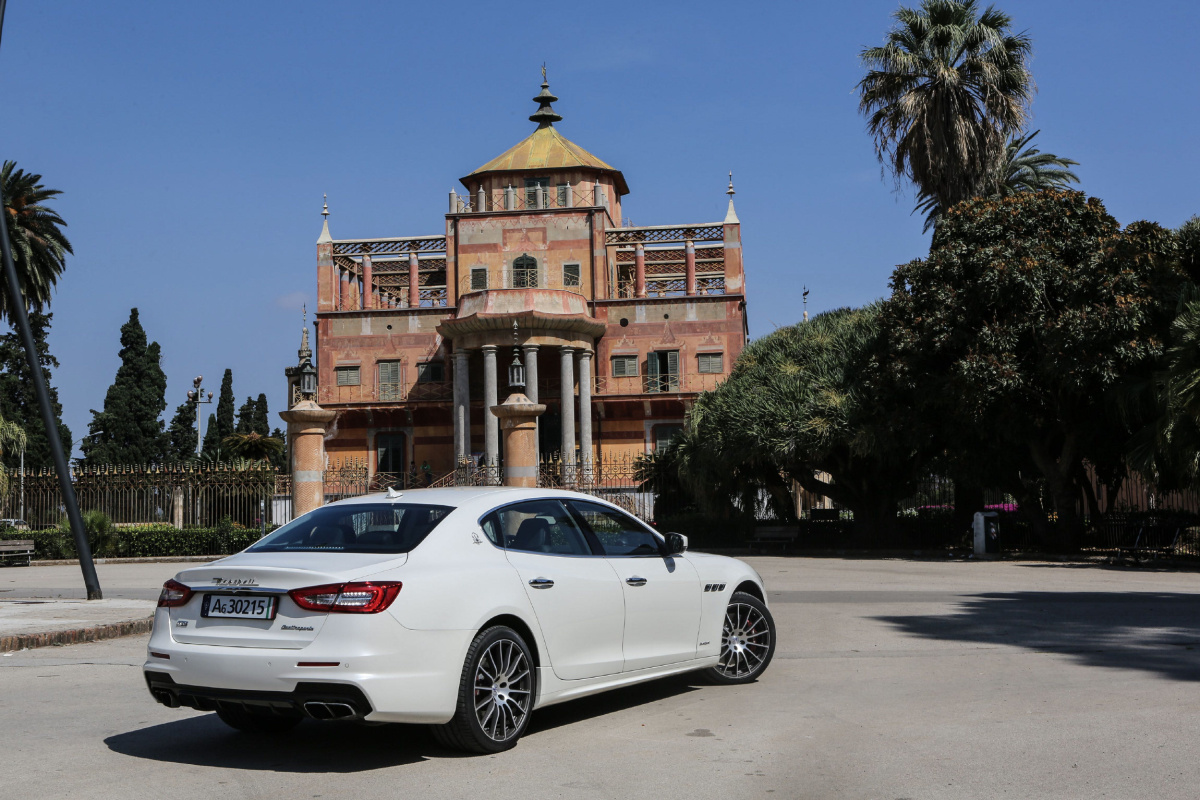 Maserati has stayed with hydraulically assisted power steering rather than the increasingly common electrical assist, in pursuit of superior road feel.

The oily bits stay pretty much the same, too. Two mechanical configurations are available in Canada: the SQ 4, a twin-turbo direct injection 404 horsepower, 3.0 litre, 60-degree V6 is offered only with full-time, four-wheel drive in Canada (Rest of World gets a rear-drive V6 option); and the GTS, with a 523 horse, 3.8 litre V8, also twin-turbo direct injection, available only in rear-wheel drive, because apparently running front-wheel drive shafts around the V8 was more effort than the small potential sales results would justify.

All models use the nearly ubiquitous ZF eight-speed automatic, with huge metallic paddle shifters mounted behind the steering wheel.

Maserati has modified the shift schedules for more responsive performance. 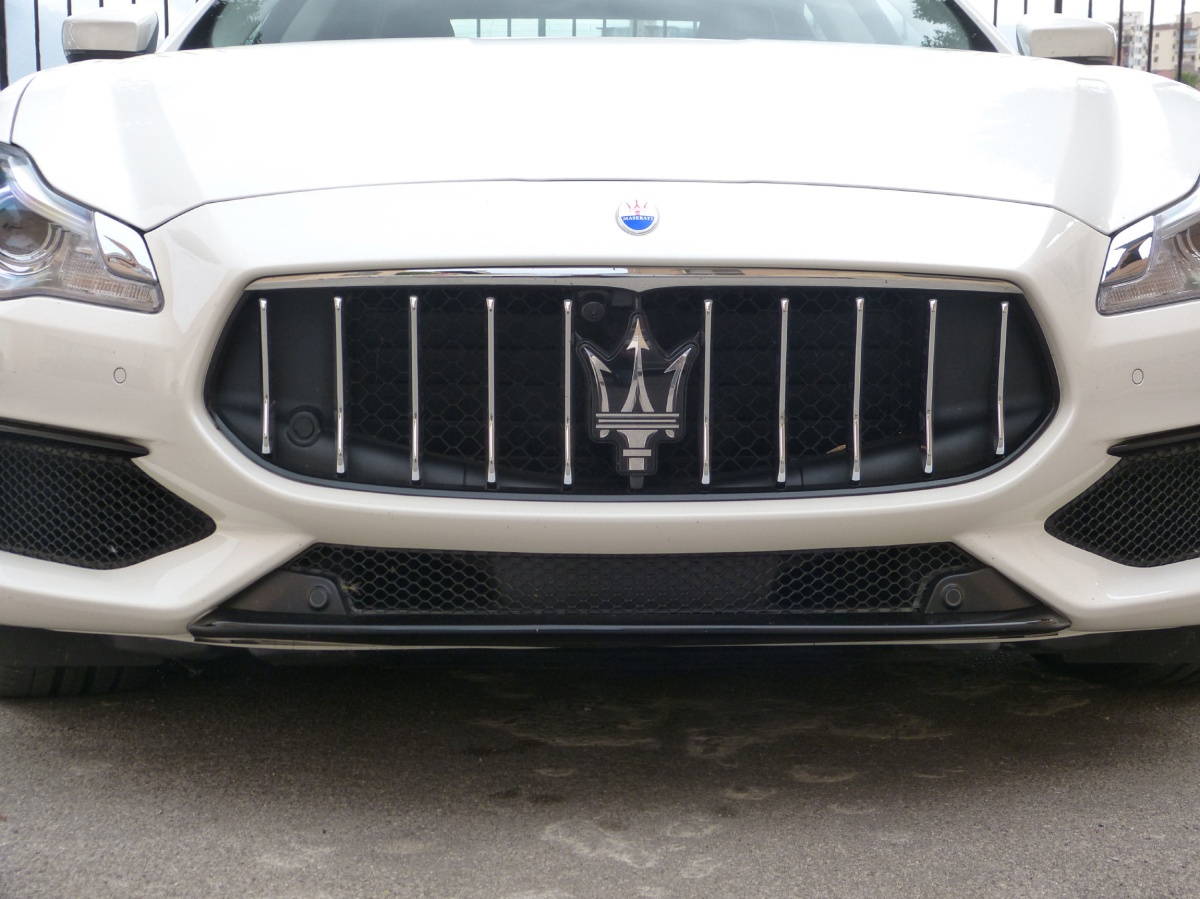 Revised grilles, air scoops, fascias, and front and rear and taillights highlight the exterior changes, designed to give the car a more commanding and sportier presence.

The biggest changes take place inside, in the form of new design and execution, and significantly upgraded equipment.

Maserati has always positioned itself on the sportier side of the luxury car spectrum, but realized that especially in North America, buyers in this snack bracket insist on all that ‘connected’ stuff.

So, a new larger capacitive touch screen is added, with Apple CarPlay and Android Auto capability.

A rotary dial behind the slimmed-down shift lever adds some welcome redundancy to this functionality, because, let’s face it, folks, trying to operate a touch screen while driving is as dangerous if not more so as working your cell phone. How can it not be, when the technology is the same?

There’s also a back-up camera, stop-and-go cruise control, and even a Wi-Fi hot spot on offer.

Oh, if you think you recognize that touch screen, it is probably because Maserati is part of the Fiat-Chrysler group, and it is effectively the corporate ‘Uconnect’ interface. 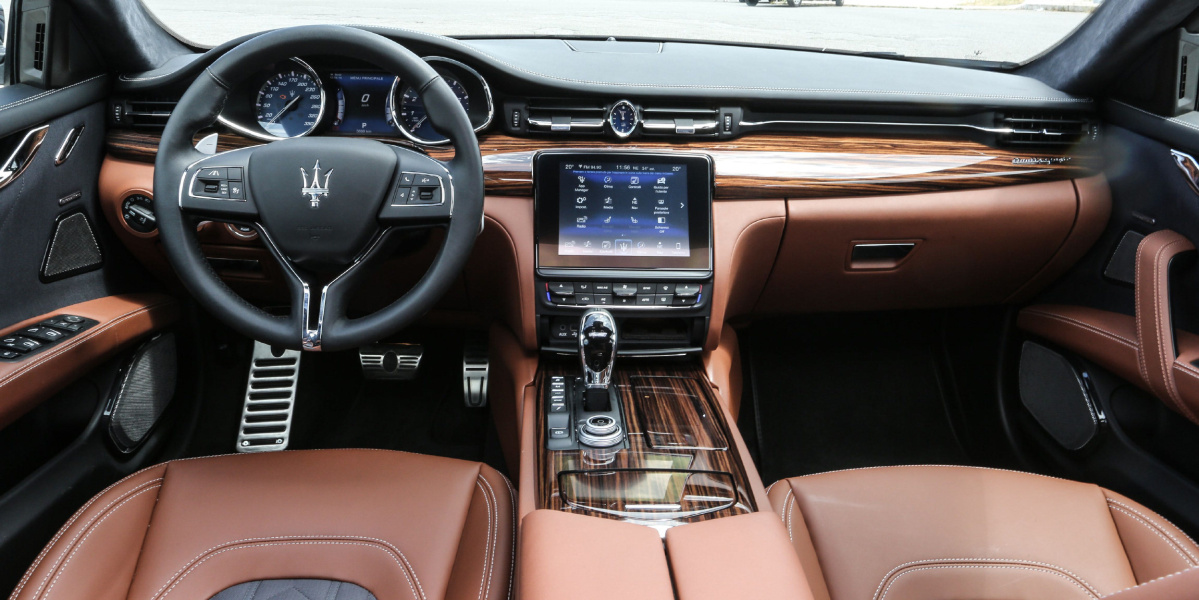 From a usability perspective, that’s not an All Bad Thing, because Uconnect is one of the better such systems (OK, so, it is a slow field).

But to see the same system in a six-figure luxury car that you’d find in a $20,000 Fiat is more than a bit disconcerting.

Likewise, any of the various switches (‘Start’ button, window controls) and levers (turn signal/wiper stalk) which also originate from the corporate parts bin.

This is particularly distressing, because otherwise, it’s the interior that sets the Quattroporte apart from its mostly German competition.

First, being such a large car, the interior is huge. Second, two trim packages, GranLusso (big luxury) and GranSport (you can figure that one out for yourself) allow you to lean in either direction with one tick on the order form.

I tested both an SQ 4 (the four-wheel drive V6) and a GTS (rear-drive V8) in town, on a few klicks of Autostrada, and over some delightfully challenging mountain roads around this capital city of this ‘Regione’ of Italy, essentially the football that Italy’s boot is kicking. 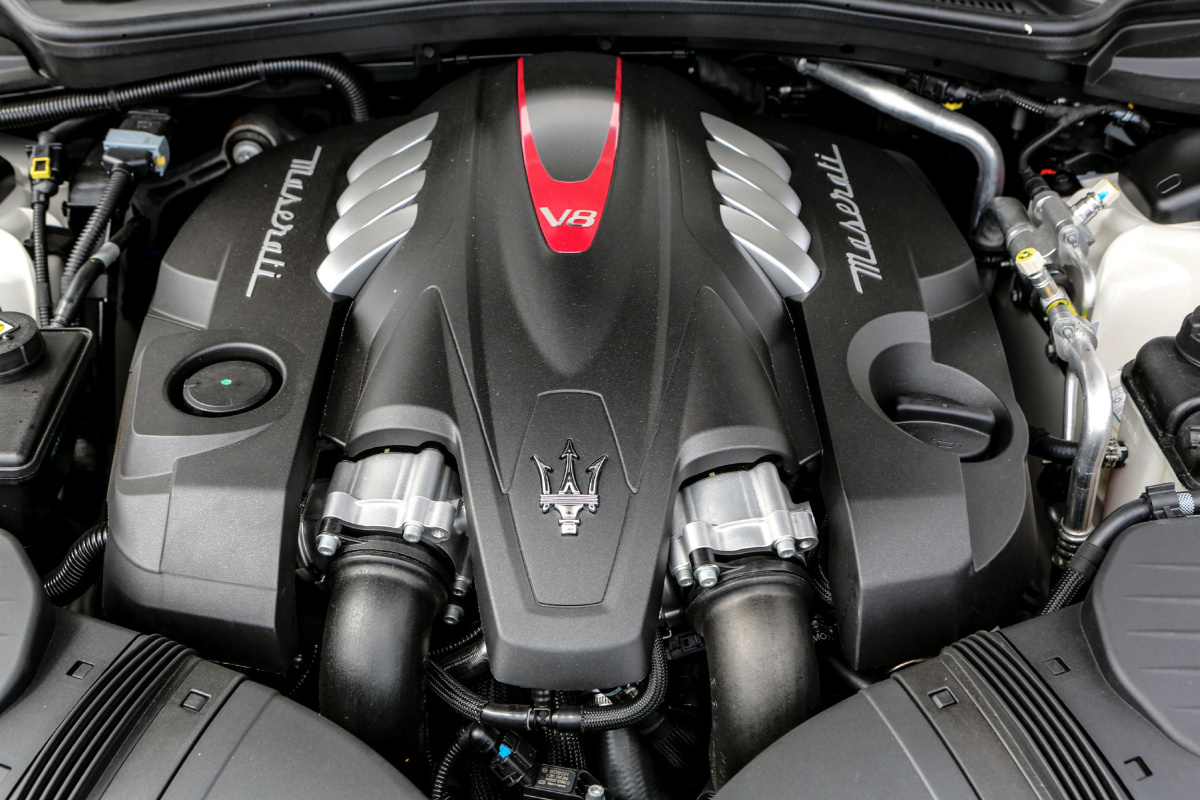 By the stopwatch, straight-line performance is not as different between the two engines as you might expect. Maserati offers 0-100 km/h times of 4.9 seconds for the SQ 4 V6, versus 4.7 for the GTS V8.

Subjectively though, the V8 feels a bit faster than the numbers indicate, having somewhat sharper throttle response.

Interestingly, a rear-drive S V6 model (which we don’t get) comes in at 5.1 seconds, so some of the difference comes down to the four-wheel drive system getting the power to pavement more effectively.

The system is rear-axle-biased, to maintain the traditional sporty car feel, but drive torque is automatically transferred to the fronts in the appropriate proportion as needed.

As usual, the ZF automatic shifts seamlessly, although the electronic shift lever is surprisingly cumbersome to operate. 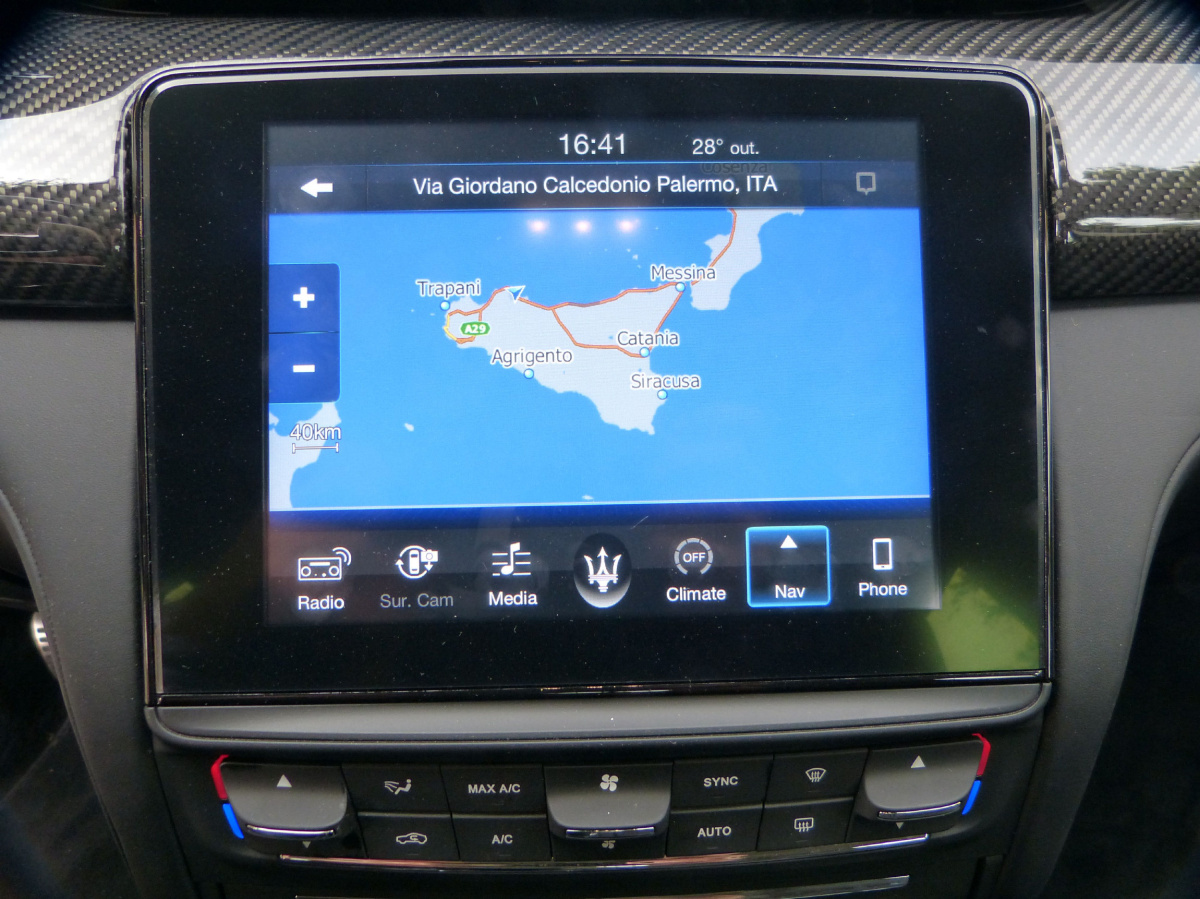 If you think you recognize that touch screen, it is probably because Maserati is part of the Fiat-Chrysler group, and it is effectively the corporate ‘Uconnect’ interface.

Especially in Canada, I expect most customers will opt for the SQ 4 model; you won’t be giving up much in performance and you will be gaining a lot in year-round usability.

Ride quality is generally very good, with a bit of body shake on higher-frequency bumps.

Maserati has stayed with hydraulically assisted power steering rather than the increasingly common electrical assist, in pursuit, they say, of superior road feel. It felt fine to me.

It does mean that such increasingly common features like lane-keep assist and self-parking are not available because they need electric steering. No loss as far as I’m concerned, nor probably for the sportier drivers to whom this car is aimed. Still, it makes the car feel a bit behind the curve.

Also Read: Intelligence and performance in a luxury package

But on the curves, it handles remarkably well for such a big car. Once you get a sense of where the edges of those fenders really are, the car seems to shrink around you, and you can toss it around with confidence.

The Maserati Quattroporte isn’t so much a competitor for the more common luxury sedans as it is an alternative to them.

But it offers a more dramatic interior (with those few exceptions already noted), a sportier presence (that exhaust note!) and perhaps more important, a different look to the more ‘common’ contenders, if ‘common’ is a word that can be used in the context of six-figure luxury sedans.