For 2016, the Encore’s encore (sorry, I couldn’t resist) carries on relatively unchanged with just the usual annual adjustment of new colours and revised wheels. “But it’s a Buick through and through,”

This is not your grandad’s Buick.

This is the 2016 Buick Encore and, when it debuted almost five years ago, it was cited as the first luxury crossover of its kind.

The Encore filled a new slot in the Buick lineup with its versatile and very compact design.

It was outfitted as sort of a little luxury runabout, blending the relative roominess of a small but tall five-passenger cabin with a tight turning circle and nimble, easy-to-park maneuverability.

“But it’s a Buick through and through,” Ed Welburn, GM’s Vice President of Design, said at the 2012 Detroit Auto Show reveal, pointing out the emphasis on quiet luxury, upgraded interior features, and even a few traditional Buick styling cues – the waterfall grille and, yes, portholes. 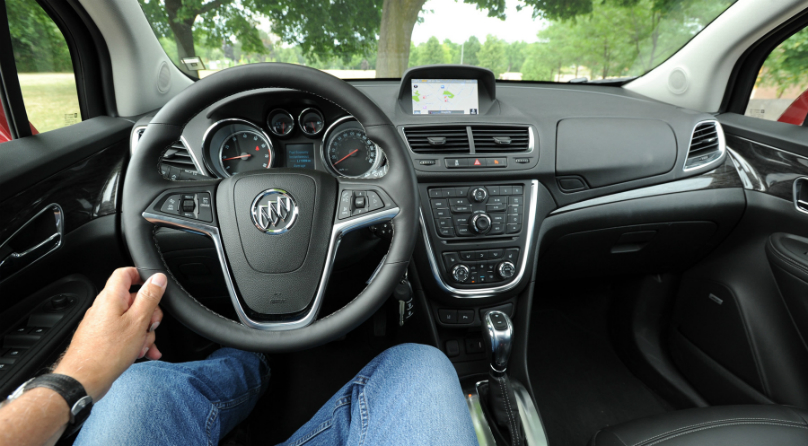 The Buick Encore has done well since that introduction and when you combine the sale’s numbers of the Encore with those of its more econo-oriented Chevy Trax sibling, GM seems to have a solid hold on the number one sales position in the subcompact CUV category.

For 2016, the Encore’s encore (sorry, I couldn’t resist) carries on relatively unchanged with just the usual annual adjustment of new colours and revised wheels.

Under the hood, an Ecotec 1.4-litre turbo four-cylinder engine makes 138 hp and 148 lb/ft of torque while offering a thrifty fuel economy rating of 9.5/7.2L/100km (city/hwy). This mill pulls well enough for daily driving chores and my real world fuel economy results worked out to 9L/100km (comb).

Buick added an optional engine choice for the Sport Touring model late in the 2016 model year – a same-size but slightly tweaked direct-injection 1.4-litre turbo four-cylinder that bumps up the power level to 153 hp and 177 lb/ft of grunt while offering even better fuel economy with an assist from an electronic stop/start anti-idling system.

Both engines are mated to a Hydra-Matic 6T40 six-speed automatic transmission featuring a steep first gear and a tall overdrive, factors that combine for brisk acceleration and lowered rpm cruising at highway speeds. 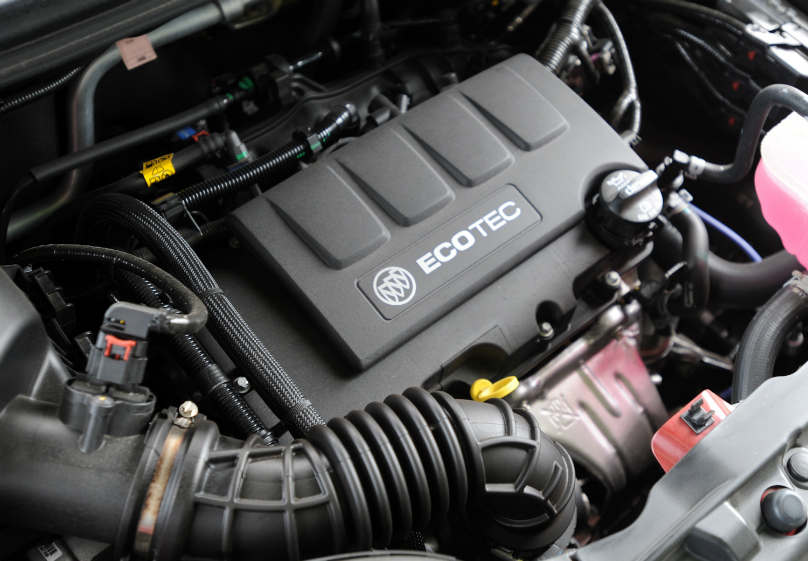 Front-wheel-drive is standard but all-wheel-drive systems ($2,000) can be opted for in all models.

And even the base model tops the content up with dual glove boxes, a rear cargo cover, a rearview camera system, ice-blue ambient illumination and a six-speaker AM/FM/CD/Sirius XM (3 month trial) audio system with IntelliLink seven-inch HD display. 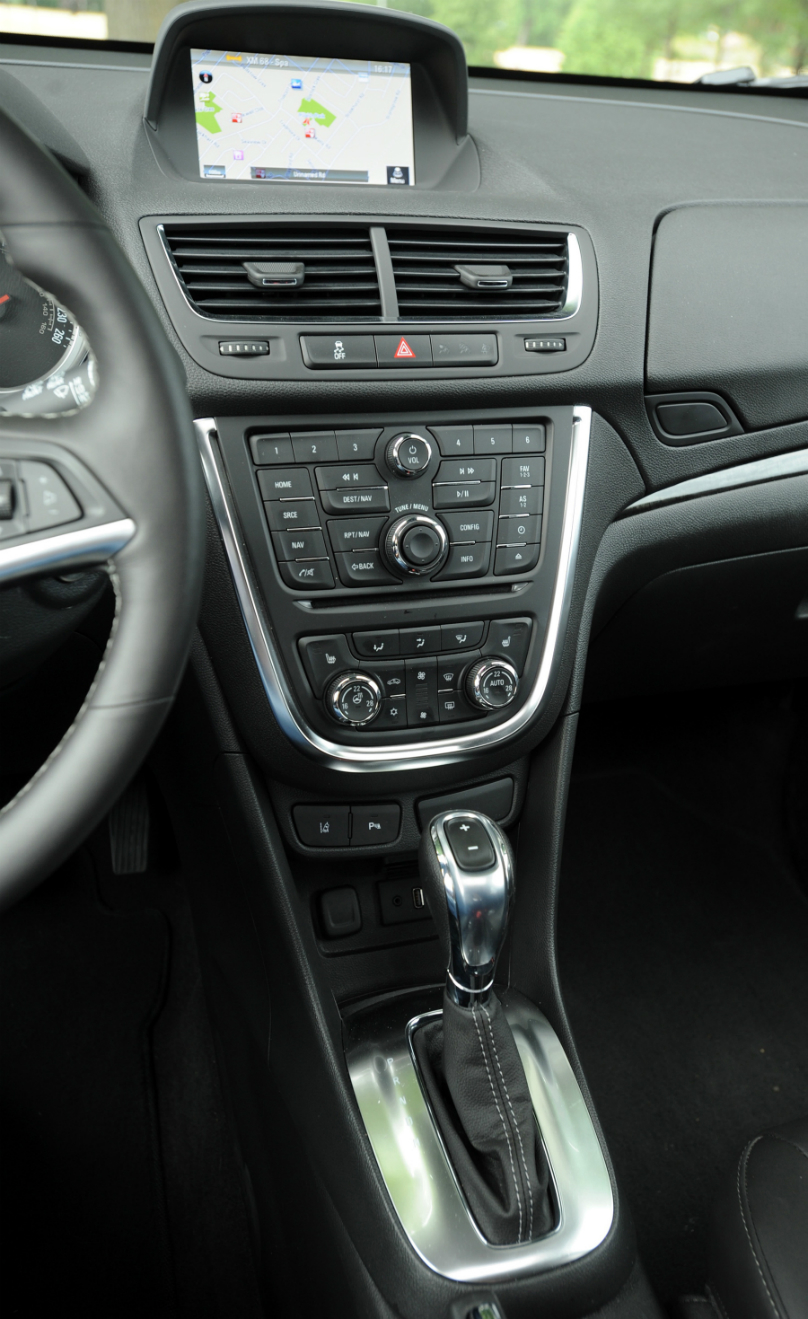 As you can imagine, that content list increases steadily as you climb the rungs of the trim level ladder, maxing out in our top-of-the-line Premium tester with extras that include leather appointments, fog lamps, heated seats and a heated steering wheel along with driver assist technologies like Rear Cross Traffic Alert, Side Blind Zone Alert, Forward Collision Alert, Lane Departure Warning and more.

I think you’re getting the picture that when Buick says “premium” they mean “premium”.

It’s a big list of luxuries in such a small package. And with all those available extras, Buick customers can pick their own personal mix of dynamic technologies and amenities. 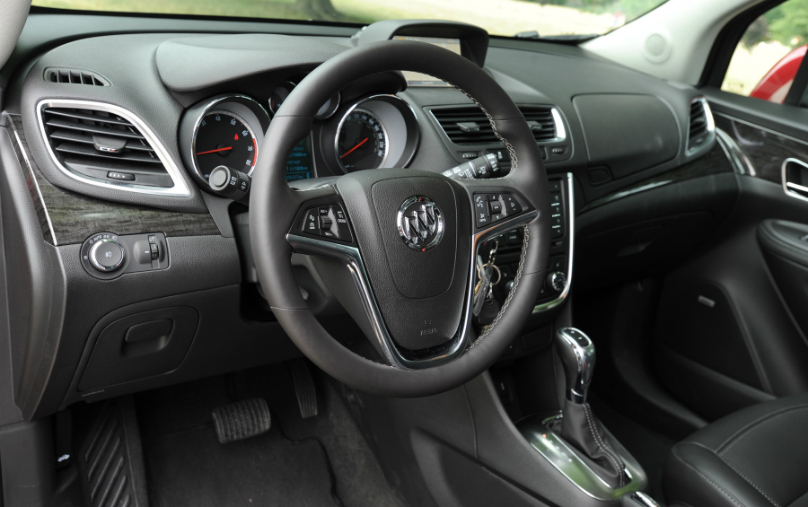 I would be inclined to weigh prices and priorities, keeping in mind the more frugal Chevy Trax (about $19K-$31K) compared to the Buick Encore price range (about $28K-$35K). And if I was leaning towards Buick, I would also be tempted to wait until later this summer or fall when a new and revised 2017 Encore shows up at dealerships.

Waiting a few weeks might also allow a little bargaining room for those still interested in a 2016 model.

Either way, Buick customers have no shortage of selections when it comes to ticking the boxes on their Encore wish lists.

I don’t know if grandad ever had it so good. 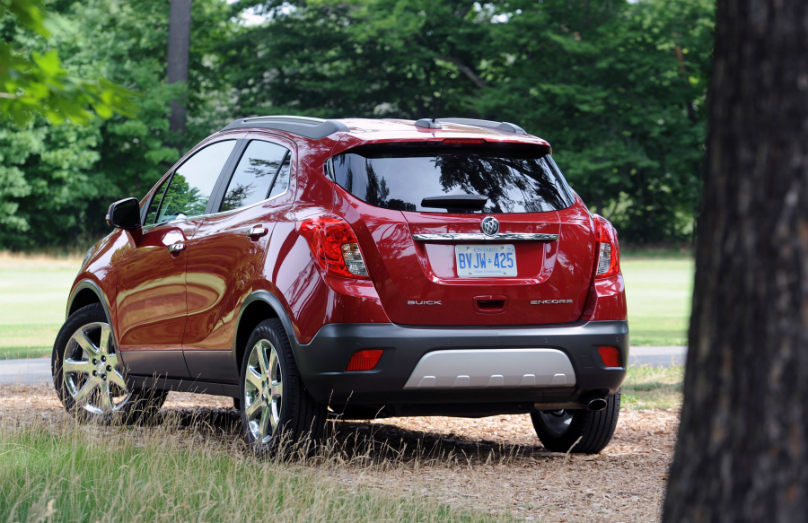