Lincoln’s back in the game with the 2017 Continental

Automaker is bringing significant resources — engineering, financial and marketing — to the playing field in attempt to re-establish itself as a premium brand domestically.

LOS ANGELES – Lincoln is now undergoing what archrival Cadillac went through — attempting to re-establish itself as a premium brand domestically, and establish an international presence as well.

Cadillac is ahead at the moment, largely by virtue of the fact that many of its models are based on architectures not shared by lower-level domestic nameplates.

Sure, the gigantic Escalade, Caddy’s bestseller, is a Suburban dipped in gold, and some of the mid-size sedans share bits with GM’s German Opel division.

Which is partially what makes the new Continental mid-size luxury sedan so important to Lincoln’s future — apart from a few floor pan stampings, the new Conti is unique.

Now, maybe the customer doesn’t really care about the bits (s) he can’t see or touch.

But I get the sense from talking with Lincoln engineers that it’s almost a pride/confidence thing, that finally they can develop cars from scratch that define what a Lincoln is supposed to be. 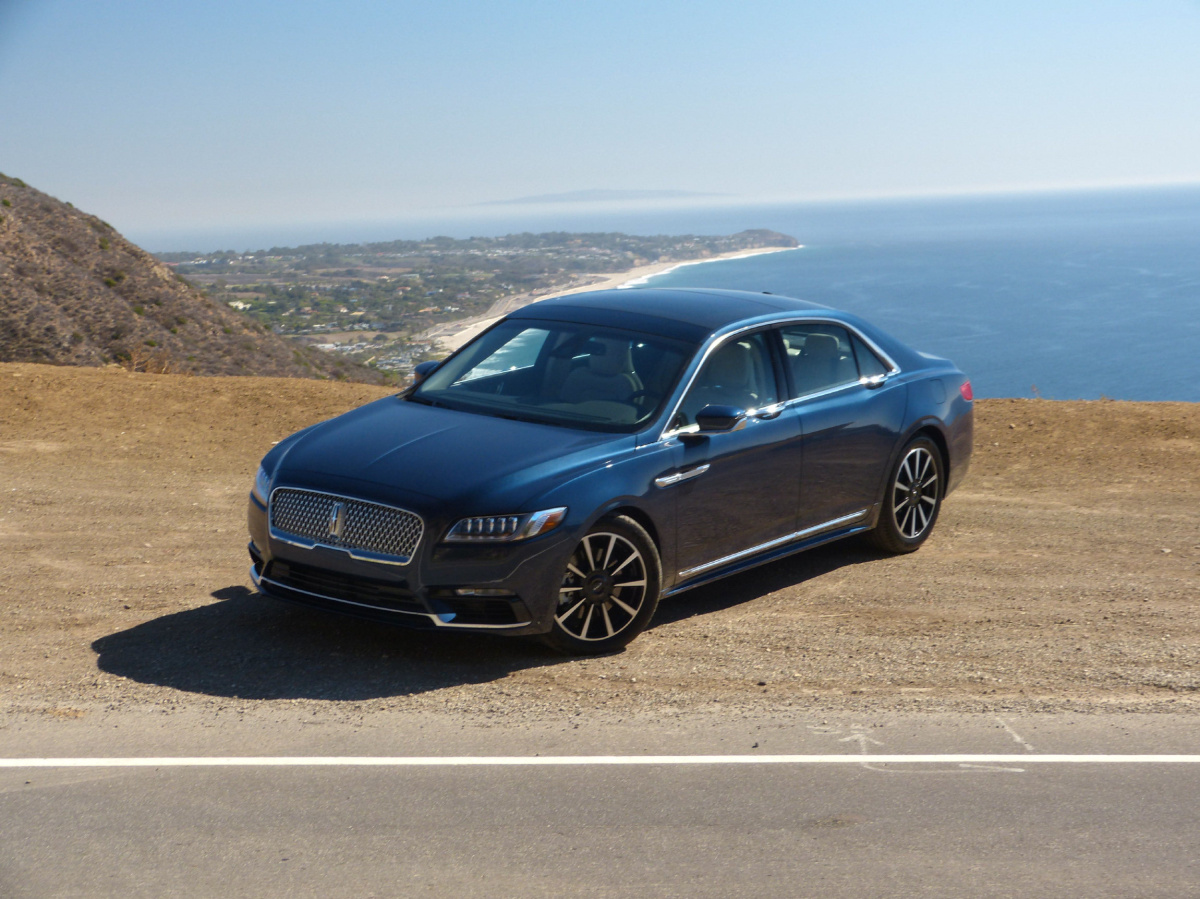 Mike Celentino, chief engineer of the new Conti, notes that they have taken what they think is a new approach to the segment.

“Our research shows most customers in this segment want a refuge. They want silence, comfort, a place to get away from it all.”

Makes sense. The vast majority of people who have experienced a Lincoln in the last decade or so have done so in the back seat of a Town Car airport limo, where comfort is paramount.

Besides, BMW owners are probably not going to even give a Lincoln a look when time comes to replace their 535.

Continues Celentino, “So, our mantra for the Continental was elegant design, serene interior, effortless power.

“Sure, we want confident handling and strong performance,” he says. “But we aren’t trying to be another BMW 5 Series clone.”

When the concept car was first shown at the New York Auto Show in 2015, it raised quite a stink about it resembling a Bentley. Some of the stink was in fact raised by Bentley’s then-chief designer!

If you look hard enough, you will find similarities between any two cars. Four wheels, a windshield …

Suffice it to say that the new Conti is a handsome, nicely proportioned piece. 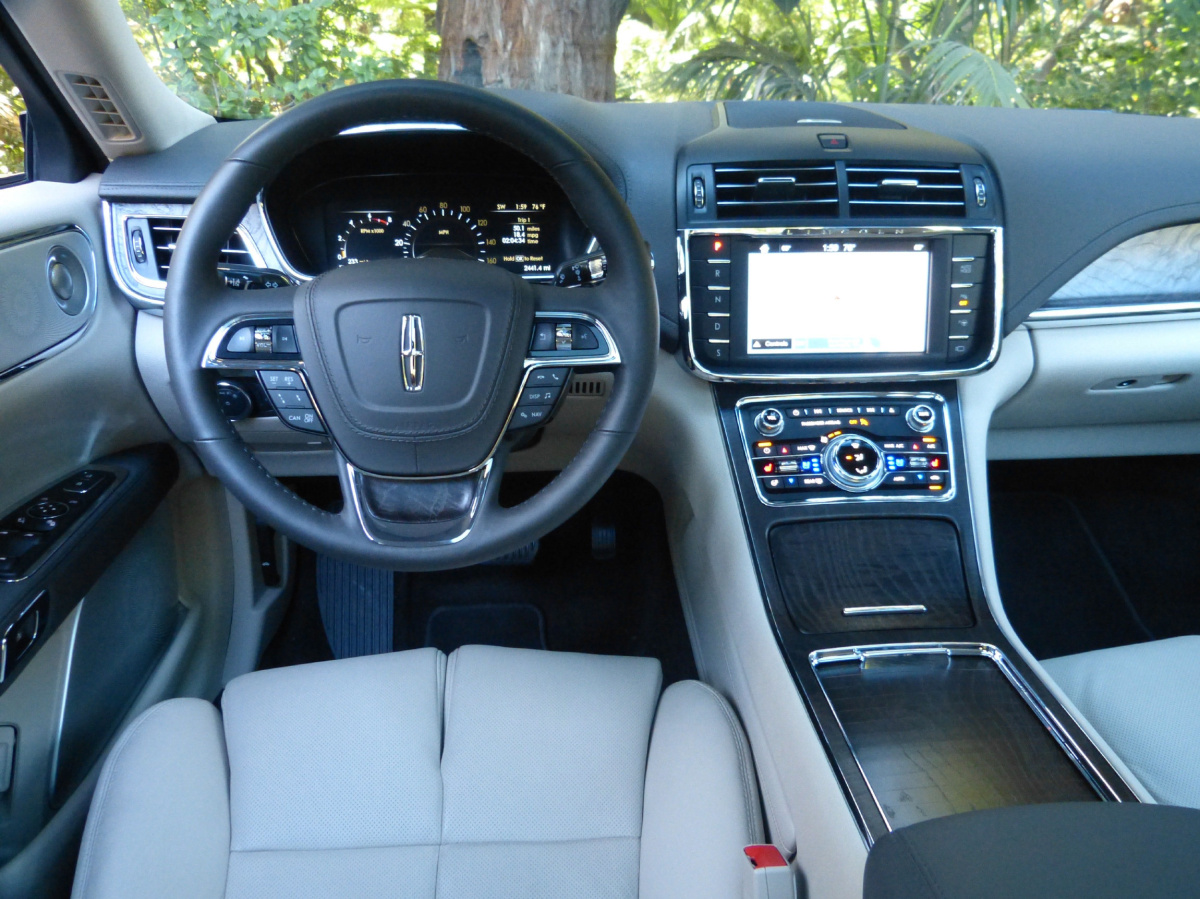 The Lincoln people are very proud of the Lincoln ‘star’ graphic — kind of a vertical elongated oblong hexagon with a cross in the middle — which pops up in places like the grille egg-crate elements and the LED headlights.

Not sure this symbol will ever quite resonate with most customers the way, say, the Mercedes-Benz three-pointed star or BMW’s roundel do. But you gotta start somewhere.

Lincoln is also proud of the front seats, designed in-house and intended to advance the art, not just follow trends.

Comfort for all shapes and sizes took precedence over side bolster support on the well-judged theory that Conti owners are unlikely to take their cars on the Nurburgring, and prominent side bolsters hinder ingress and egress.

In the available ‘’ 30-way adjustable seats, a feature unique in my experience, anyway, is that the lower-middle section of the front seatback is hinged at the lower edge, so that panel can be power-adjusted to provide more support for the middle and upper back.

These seats also have separate adjustable thigh support for each leg, and a massage function.

On my test drive, several hours in Los Angeles and surroundings, they proved supremely comfortable, and as supportive as you would ever need for the type of driving you’re likely to be doing in this car.

Rear-seat riders are well taken care of, too. Much of the thrust here comes from Lincoln’s focus on the Chinese market, where many wealthy people prefer to ride in the back while the chauffeur drives.

Or, at least they want their neighbours to think that’s why they bought a car with such a big back seat …

“Oh, yeah, I have a chauffeur but I just happen to be driving myself today …”

Those seats are also adjustable on the top-end trim level, and you get audio and HVAC controls, too. 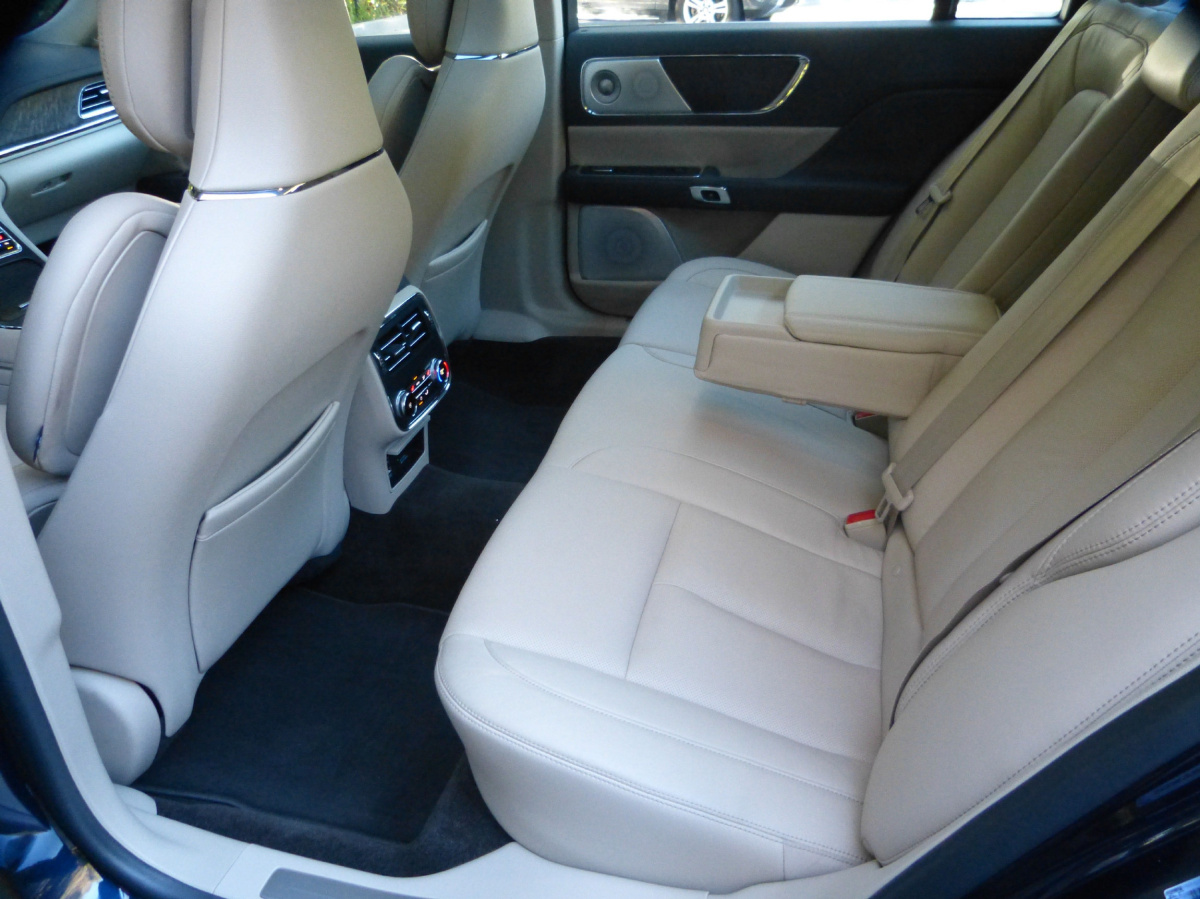 While the new Continental is based on a front-drive architecture, and front-drive models will be offered in the U.S. and some global markets, Canada will get only the full-time, four-wheel drive variants, because our luxury customers show little interest in anything else.

The U.S. also gets a naturally aspirated 305 horsepower 3.7-litre V6, but Canada opted out because it’s only offered in the front-driver.

The urge is massaged by an automatic transmission with six speeds, which seems too few in an age when others offer eight and even nine ratios. Then again, with all the torque the turbo motors generate, you won’t really miss those extra gears.

My test car was a top-of-the-line Reserve trim level with the 3.0-litre V6.

The new Conti begins with a series of welcoming gestures called (rather preciously, I must say) the ‘Lincoln Embrace.’ As you approach the car and the key fob gets within about three metres, illuminated ‘welcome mats’ (other car companies call these ‘puddle lamps’) showing the Lincoln logo project on the ground; the door handles glow to help you locate them in the dark; LED accent lights within the headlights and tail lights let you know the car is expecting you; and ambient lighting gently bathes the interior.

The door latches are electronic buttons inside and out. If you’ve been in a Corvette recently, you know how these work.

The push button to start the car (the best technology the 1930s had to offer …) also contains a light which pulses, an idea Lincoln apparently lifted from former corporate cousin Jaguar.

The idea of all this is to try and make the car more animate, less mechanical.

Once inside and the light show subsides, the second impression is the seats. As promised, they are easy to get into, and very comfortable.

The interior is very nicely finished, with what appear to be high-quality materials. 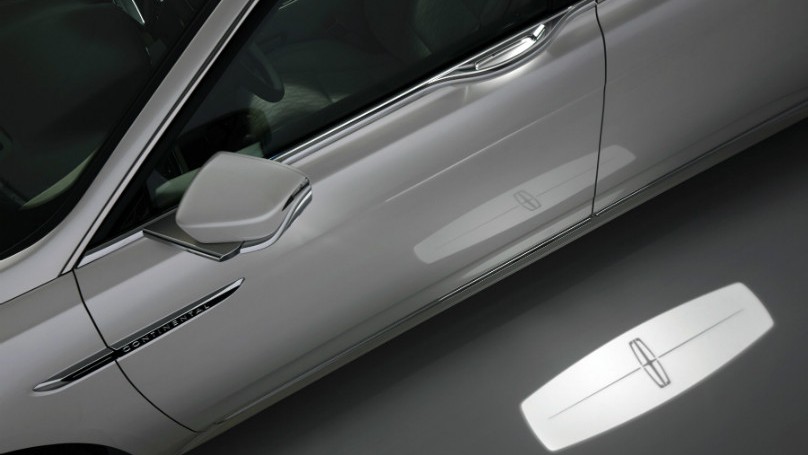 Next positive impression once underway is of the also-promised quietness. It really is hushed in there, with engine, wind and road noises nicely suppressed.

An Active Noise Cancellation system kills anything that manages to slip by.

Or, you can crank up one of three different available sound systems with as many as 19 speakers.

Ride comfort is also well-handled, with just a touch of patter over sharper creases in the pavement.

In the hills of Malibu north of L.A., one really can’t help but lean on a car a little, to see what it can do. The route planners’ faith in their car in putting it to this test was largely rewarded.

Again, in a large, silent luxury car, competence in apex strafing and canyon carving aren’t likely to be on top of your must-have list.

Nevertheless, the big Conti handles this duty well, aided in no small part by torque vectoring and a GKN rear differential system like that in Focus RS to help steer the car around corners. I have always said that competent handling is vital, should the car be put into an emergency situation.

And even if few of Conti’s customers will ever explore the outer limits of its capabilities, some might, and why not aim high, go for 100 per cent of the market?

If you can do this at no cost to ride comfort, it’s win-win.

Again, as I always say, engineering a good car is not brain surgery. It is only science, and if you have competent engineers and management that’s prepared to let them do their best (and to make the necessary funds available), they should be able to figure it out.

Things like styling, fine-tuning fit and finish, getting the suspension calibrations just so — that’s where the art starts to come in.

The toughest part, especially for a luxury car, is establishing the brand, getting customers to pay more for a car than it’s worth as a transportation module; i.e. a car you want to be in or be seen in, rather than just a car to get you somewhere.

That’s the challenge now facing Lincoln. It has a long, if somewhat faded, historical image in North America, not so much in Europe, and it’s essentially starting from scratch in China.

No one at Lincoln is under delusions about the enormity of the task, and they seem to be bringing significant resources — engineering, financial and marketing — to the battlefield.

The first step is building a car that’s worthy of consideration.

The main difference is Lincoln has been around for almost a hundred years, while Genesis is comparatively brand new. Does having a history help?

If that history in most people’s minds is as a supplier of Town Car limos whose design dates back 20 years, maybe not.

Then again, Mercedes-Benz makes the taxis for most markets in the world, and they do all right.