The Lamborghini Huracán's name (huracán being the Spanish word for hurricane) is inspired by a Spanish fighting bull.

DOHA, Qatar — When Lamborghini was working on the Huracán, the Gallardo replacement, a rear-wheel drive variant was in the program from the beginning. 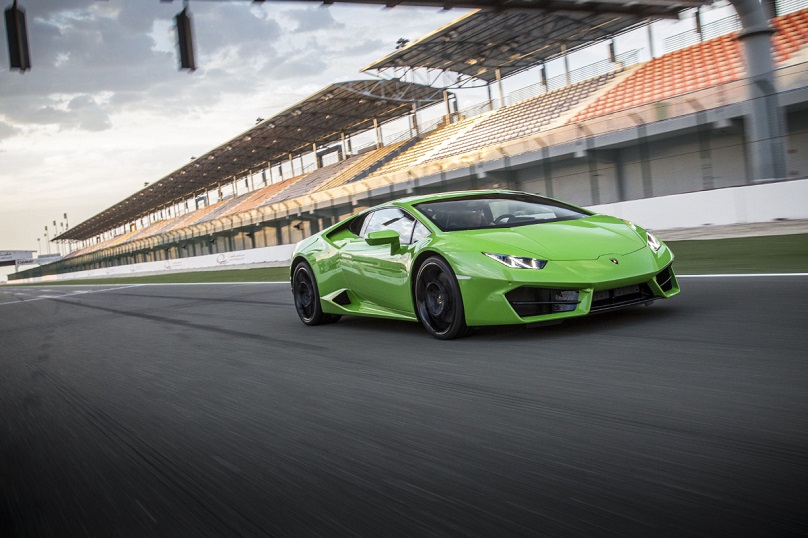 The LP 610-4 made its debut last year in coupe and convertible body styles. Now it’s the rear-drive coupe’s turn to shine.

The main differences between the Huracán’s two configurations are indicated by the nomenclature.

LP, Longitudinale Posteriore, indicates a north-south engine located in the posterior of the car. The 610-4 means 610 horsepower from the 5.2-litre V10 engine is sent to the ground through an all-wheel drive system.

Why 30 fewer ponies? Lamborghini’s director of research and development Maurizio Reggiani told me they felt that with only two wheels motivating the car, 610 horsepower might have overpowered some drivers. 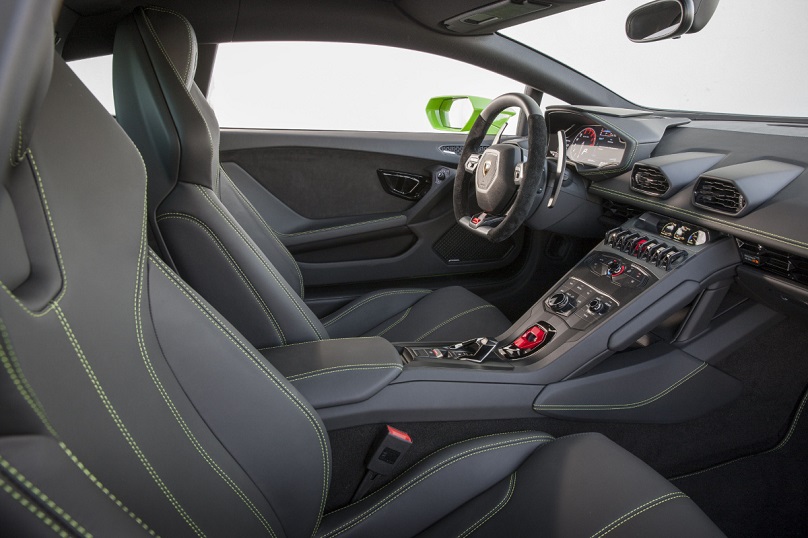 From the outset, the rear-drive car was intended to be the fun-to-drive version. Not that the four-wheel driver is exactly dull.

But ultimate fun-and-games pretty much demands that power only be sent to the back wheels.

In this new Huracán, the fun starts with 33 fewer kilograms to haul around, most of which comes from the elimination of the front-wheel drive machinery. 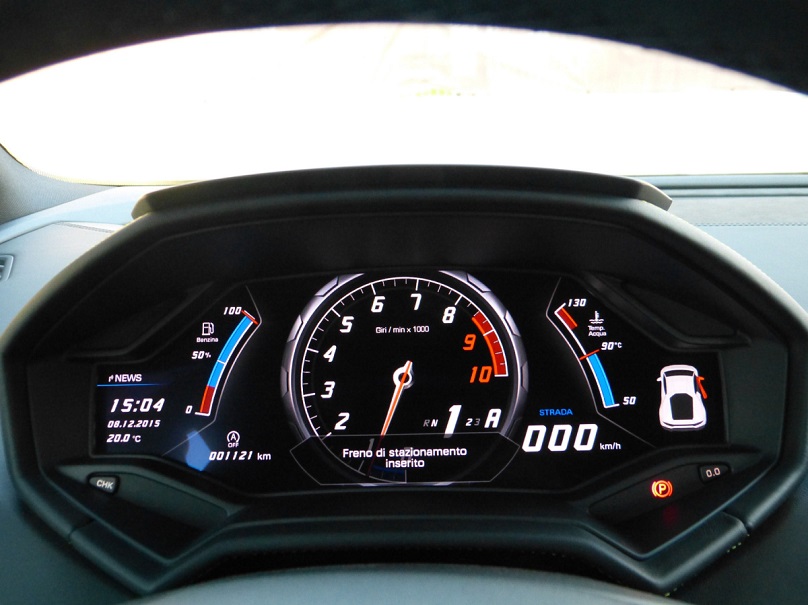 Less weight is always good. Here, it is distributed 40/60 front to rear versus 43/67 for the 4WD version, again for more rear-biased entertainment.

This also means the front wheels are relieved of any motive function — all they have to do is steer the car. Like most of us, if you only have to do one thing at once, you probably do a better job of it.

These cars really do.

The front suspension is also softened to allow better bite into the corners, and the entire suspension tweaked subtlety to accommodate the new drivetrain.

For the first time, a MagnaRide suspension is offered as an option. If it’s good enough for use in Corvettes and Ferraris …

Both the front and rear ends have been restyled apparently to improve aerodynamics, but mainly so your neighbours will know you have a different Huracán than they do. That’s assuming you live in that sort of neighbourhood. 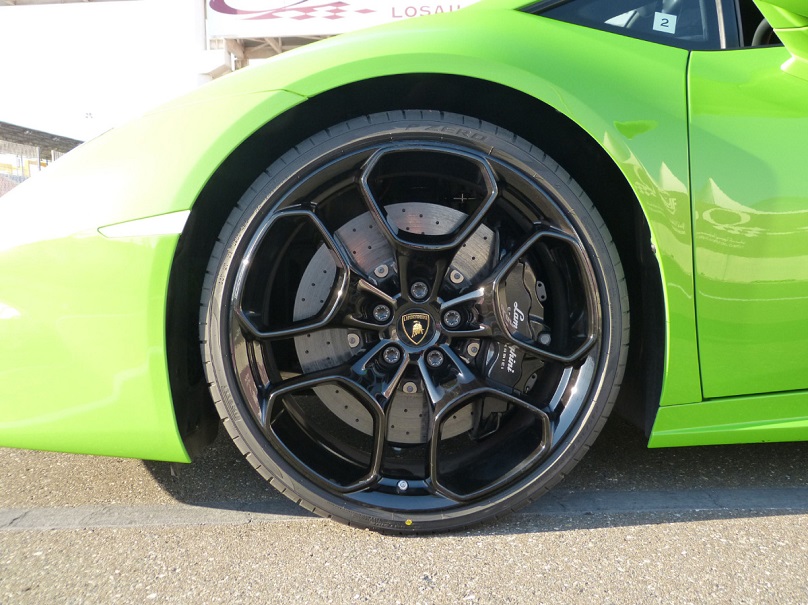 To try out a massively fast car in a relatively safe environment, a race track was almost mandatory. The one Lamborghini chose was the Losail International Circuit in Doha, Qatar. Originally designed for Moto GP motorcycle racing, it has a nice combination of fast sweepers and tighter corners to evaluate the breadth of this car’s capabilities.

I have not tried an LP 610-4 on a track (Lambo, you have my number) so a true back-to-back comparison was not possible.

But for sure, this car turns in brilliantly. The electronic power-assisted steering is light, direct and full of feeling.

Powering out of a corner, there is no tugging at the front wheels as in most four-wheel drive cars, which often leads to speed-scrubbing understeer. There’s just delicious forward thrust in the 580-2.

There is more than enough power to hang the tail out if you want it to. The quick steering should be enough for you to recover. If not, the Electronic Stability Control System (ECS) will bail you out.

Like other Lambos, you can select from three driving programs. “Strada” (street in Italian) offers nice benign handling characteristics. “Sport” (no translation required) extends the limits of the ESC system to allow more tail-sliding fun. “Corsa” (race) shoves those limits even further. You can shut the ESC off altogether if you are really brave or really foolish. Maybe both. 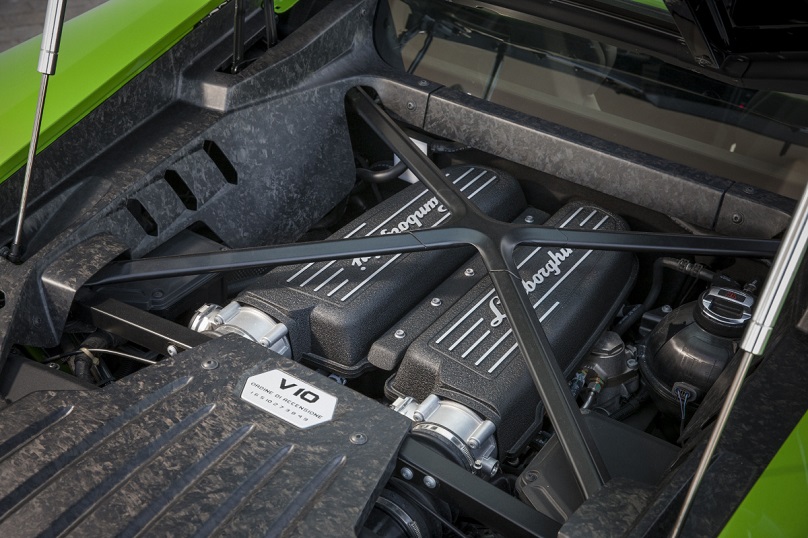 Not wanting to be “that guy,” I was modestly cautious during our four lead-follow track sessions.

I did get mildly sideways a couple of times, but a quick opposite-lock flick was all that was needed to bring the car back in line. OK, so a couple of cones felt my wrath when I ran a bit wide once in Turn 5.

All of this is accompanied by the delicious exhaust note, augmented in Sport or Corsa modes by what Reggiani calls “post-combustion simulation.” Some exhaust gasses are recirculated into the exhaust manifold where they cause a fabulous “snap-crackle-pop” sound on the overrun.

Our test cars were equipped with the MagnaRide suspension. The smooth track surface didn’t pose much of a challenge, but from other cars I’ve driven with this system I expect ride quality will be far better than the ultralow profile Pirelli PZero tires would suggest.

Incidentally, the rubber was specifically developed by Pirelli for this Lambo. Our cars also had the optional carbon-composite brakes, highly recommended if you are going to do much track work.

There are now three Huracán models. The LP 610-4 Coupe is the ultimate performance variant, the LP 610-4 Spyder is the lifestyle car, and the new LP 580-2 is the fun-to-drive car.

Prices are not yet finalized for Canada, but look in the mid-$200k range — and you take your choice. 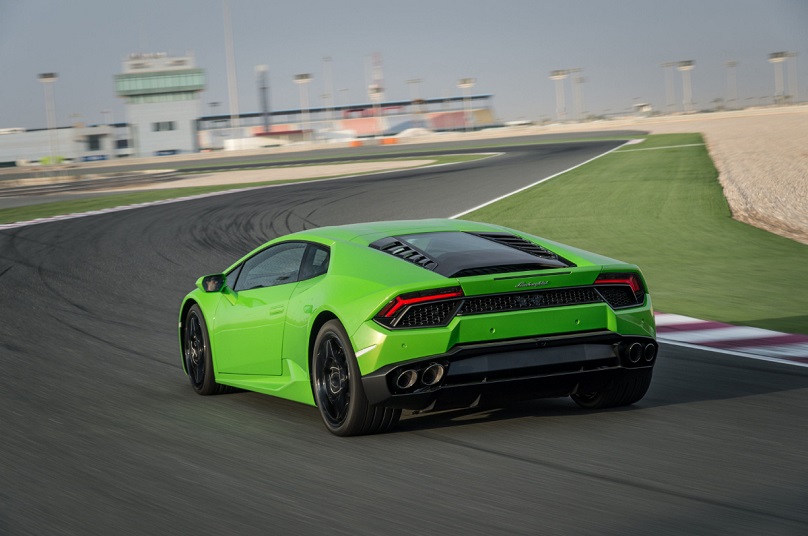 Competitors: The Ferrari 488GTB is the successor to the fabled 458 and still carries the mail.

The McLaren 650S is perhaps the most technically advanced car in the group.