The first truly global Jeep, designed in North America, built in Italy and seen here in Canada in North 4X4 trim dipped in a lustrous JetSet Blue Clearcoat, a new colour for 2016

Seventy-five years after the birth of the original, the Jeep lineup rolls on as robustly as ever with a wide range of models that includes their smallest and latest entry-level addition, the Renegade.

The Renegade was the first new Jeep to be created since the blending of Fiat and Chrysler corporate cultures. It was also the first truly global Jeep to be built outside of the USA, rolling off Italian and Brazilian assembly lines with architecture based on FCA’s Small-Wide 4X4 chassis, a platform shared with the Fiat 500X.

Which naturally raised concern and not just a few eyebrows among the Jeep faithful.

But the Renegade was conceived by American designers determined to pass on all the requisite and reassuring traditional Jeep styling cues  – round headlights, the classic seven-slot grille, the trapezoidal wheel arches and upright windshield. The jerry can-style, X-shaped taillights are a nice touch,  the same pattern reflected in everything from the roof panels to cupholder inserts. The mud splatter redline graphic that only appears in daylight is a cute trick. And, if you take the time to climb through the Renegade, you will find about a dozen other subtly located cues that hint at Jeep heritage.

So, despite its Euro bloodline, the Renegade is about as Jeepesque as you can get, definitely more so, in fact, than its Cherokee sibling.

The Renegade competes in a five-passenger subcompact utility segment that is growing ever more crowded and competitive with a slate of new additions that, along with its sibling Fiat 500X, includes the Mazda CX-3 and Honda HR-V, not to mention the soon-to-be-unveiled Toyota C-HR. But among all those softroader crossovers or CUVs, the Renegade stands somewhat apart as a true SUV with a legitimate offroad pedigree.

And that mix of qualities, from commuting civility to bush-bashing potential, has resonated with a broad range of customers, making a real sales impact since its launch as a 2015 model last year. 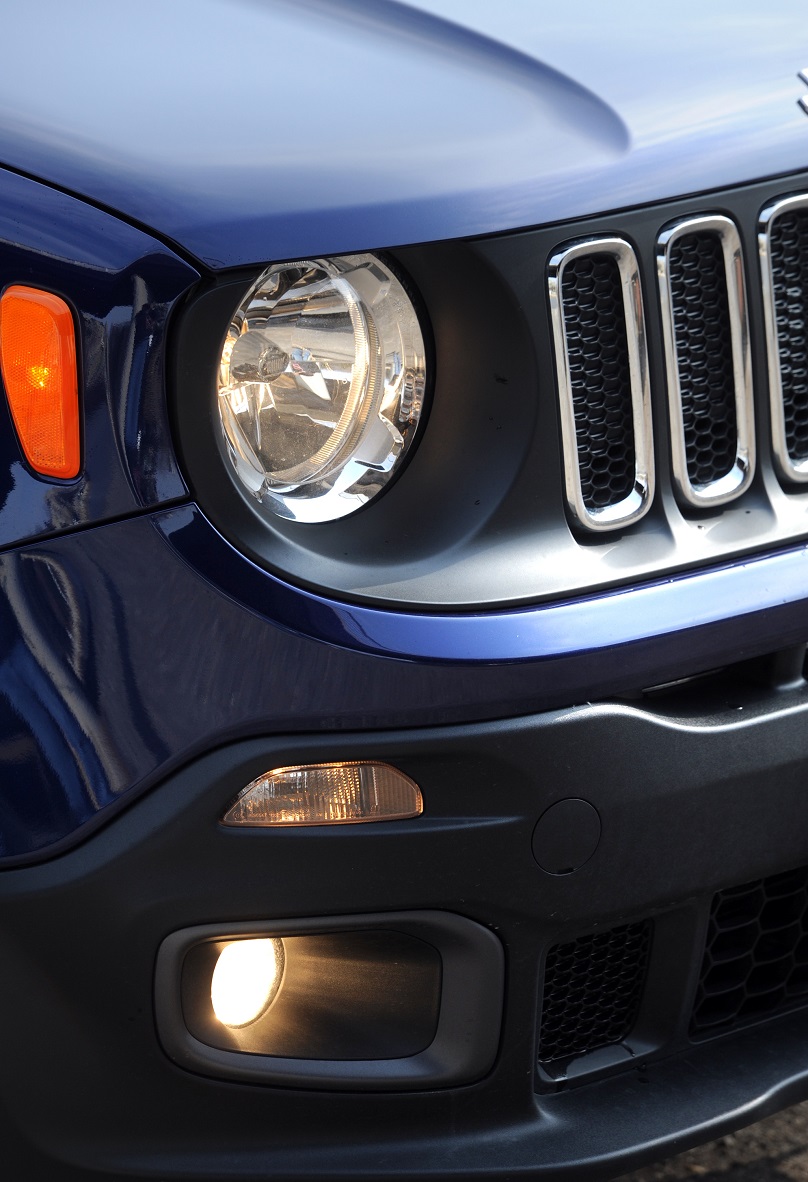 In only its second year of production, the 2016 Renegade carries over relatively unchanged, with minor upgrades including rain-sensing wipers on upper trim models and a new available 506-watt BeatsAudio premium sound system with nine speakers and a 6.6-inch subwoofer.

Two new colours for 2016 include Granite Crystal Metallic and, as tested here, a lustrous JetSet Blue Clear Coat that seems to shift from blue to purple, depending on the angle of light and time of day.

The 2016 Renegade offers a mix of 16 powertrains, diesel- and gasoline-powered, in different global markets but, here in North America, the lineup starts with a 1.4-litre MultiAir turbocharged inline four-cylinder engine making 160 hp and 184 lb/ft of torque with a fuel economy rating of 9.9/7.5L/100km (city/hwy). 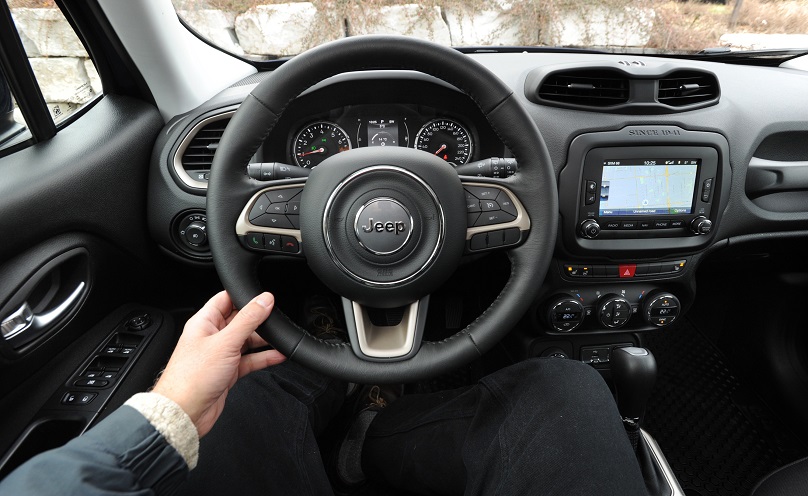 A choice of transmissions starts with a six-speed manual coming standard or an optional nine-speed automatic that first debuted with the Cherokee. Base models start in a front-wheel-drive configuration but two Jeep 4X4 systems are also available – Jeep Active Drive with four-mode SelecTerrain system or Jeep Active Drive Low (for the Trailhawk model) with five-mode SelecTerrain system and 20:1 crawl ratio for some serious rock hopping.

There’s a surprising amount of room inside the Renegade, considering its subcompact size and dimensions, with emphasis on upright seating and plenty of headroom. In fact, the Renegade boasts more headroom than Patriot, Compass, Cherokee or even Grand Cherokee, coming in at nearly a tie with the Wrangler. The compact compromise is made in the back bench but seating versatility, thanks to a folding front passenger seat and the folding second row, that allows the hatchback cargo space to expand from 524 litres to 1,438 litres of luggage room. 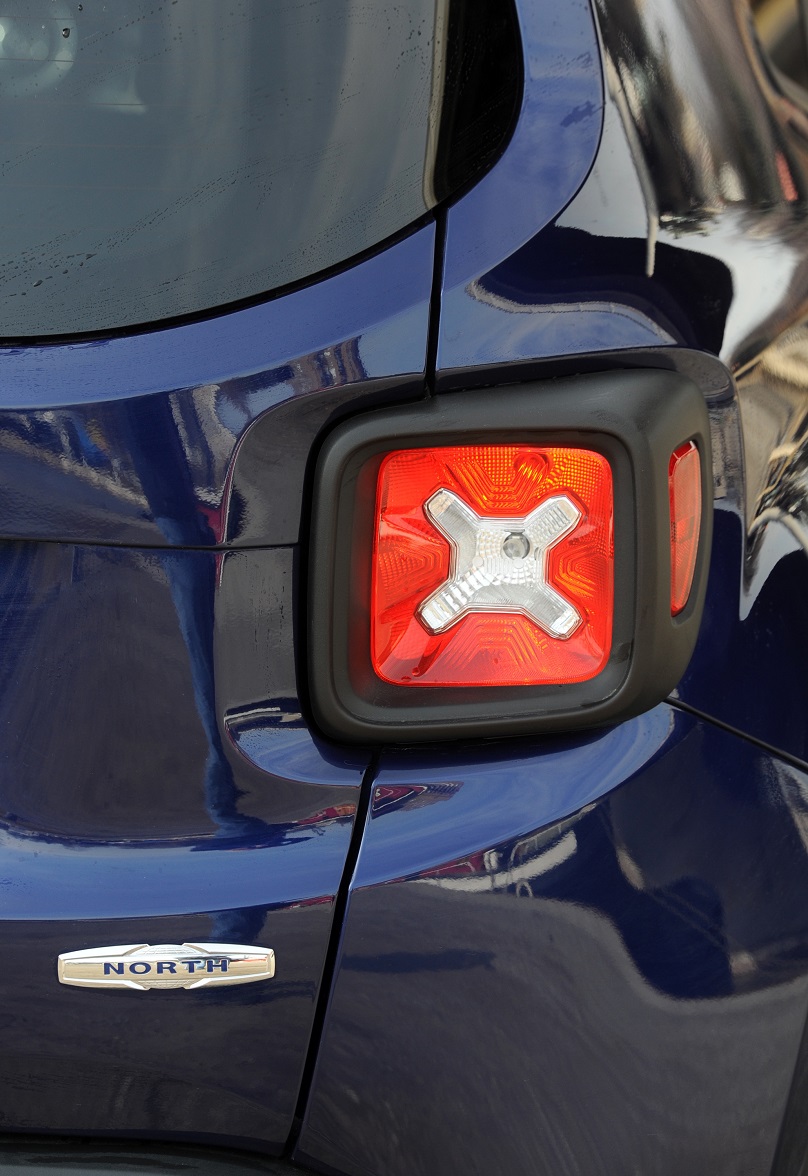 But the real strength of the Renegade lineup is the breadth of product that stretches from basic front-wheel-drive, shift-it-yourself econo transportation to a variety of 4X4 models, a Trailhawk with real offroad ability, and upscale versions with a seemingly endless list of segment-first technologies and amenity choices to suit any customer.

The 2016 Jeep Renegade, rolling into just its second year, and still gaining momentum. 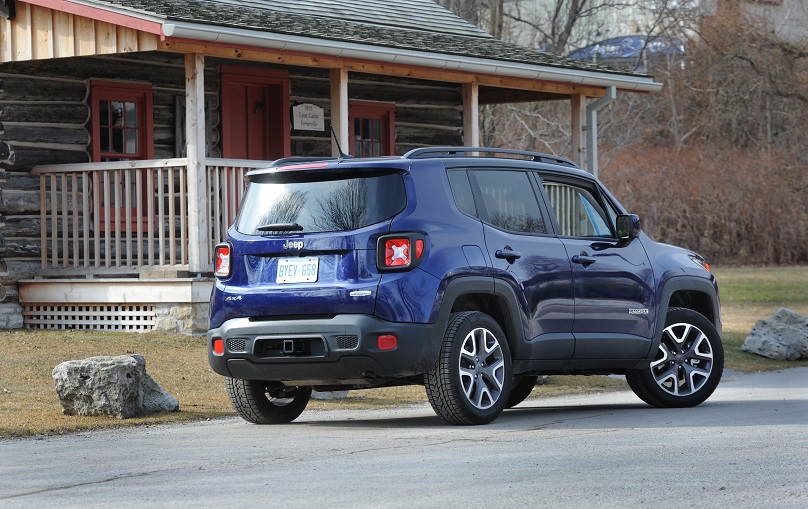