The Ioniq builds on a stiff chassis; its high-strength steel construction blended with aluminum suspension components to reduce weight. Ditto for the aluminum hood and tailgate choices.

That weight-watching emphasis is also reflected inside where eco-friendly materials include door covers made from resins mixed with powdered wood and lightweight lava stone (20 per cent lighter) and sugar cane-derived materials in the headliner, carpet and cargo cover (25 percent lighter).

Outside, the bodywork has been shaped into a sleek Kamm-tailed hatchback profile, with aerodynamic benefits from front wheel air curtains, side sill mouldings, closed wheel designs, an underfloor cover and a rear spoiler and diffuser, all contributing to a slippery 0.24 drag coefficient.

It’s a handsome design, with the requisite Hyundai hexagonal grille bracketed by jewel-like headlight assemblies, the overall sporty shape and stance enhanced by its fluid styling.

Hyundai introduced two models first – the Hybrid and Electric versions and I had a chance to put them through their paces. 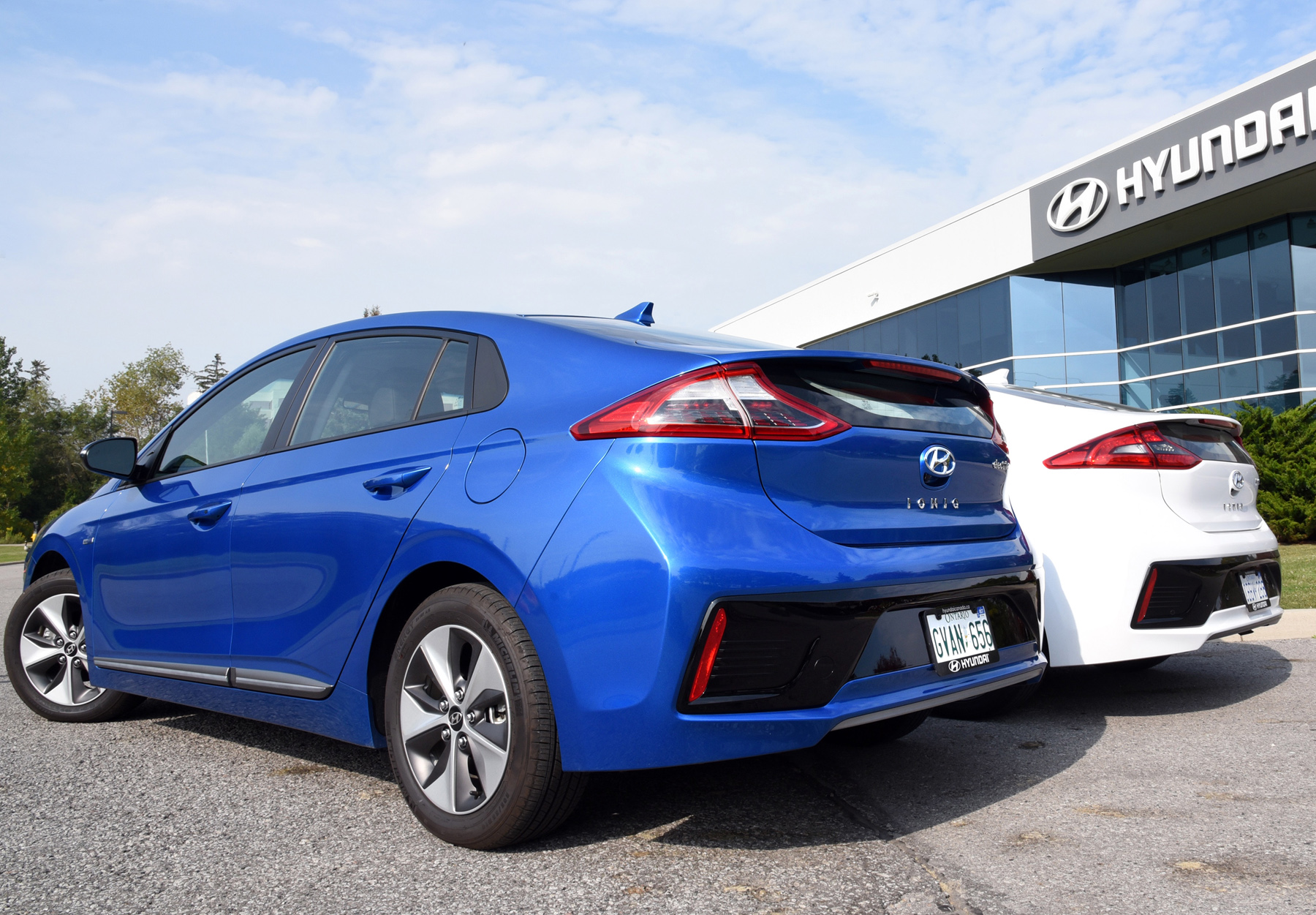 That results in an acceptable surge of acceleration and, where other manufacturers design in a CVT transmission to make the most of hybrid economy, Hyundai has taken the unusual step of translating power more directly through the first-ever application of a sportier six-speed DCT transmission in a hybrid. 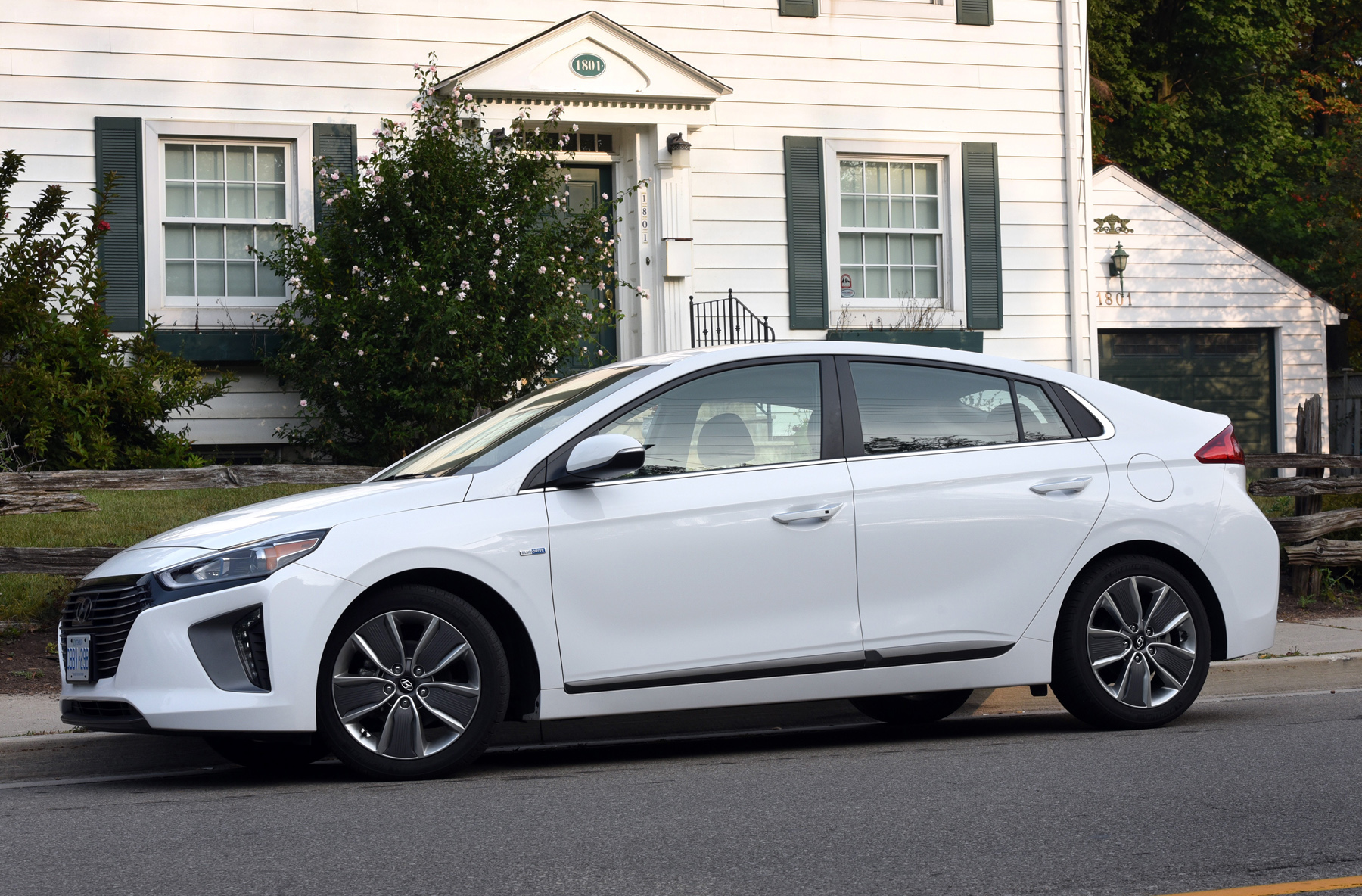 Along with Auto Stop-Start, that contributes to a thrifty 4.3/4.4L/100km (city/hwy) fuel economy rating. According to the trip meter, the previous tester only managed a 5.9L/100km (comb) average but I earned a respectable 4.7L/100km (comb), all managed comfortably in well-finished compact confines with about the same passenger volume (2,724 litres) and even more cargo room (750 litres) than an Elantra GT hatchback.

Not much to complain about here. The horizontal-split rear window brings to mind the Honda CR-Z, Hyundai’s own Veloster and, dare I mention it, Pontiac Aztek, but its an easy visual impairment to work around. 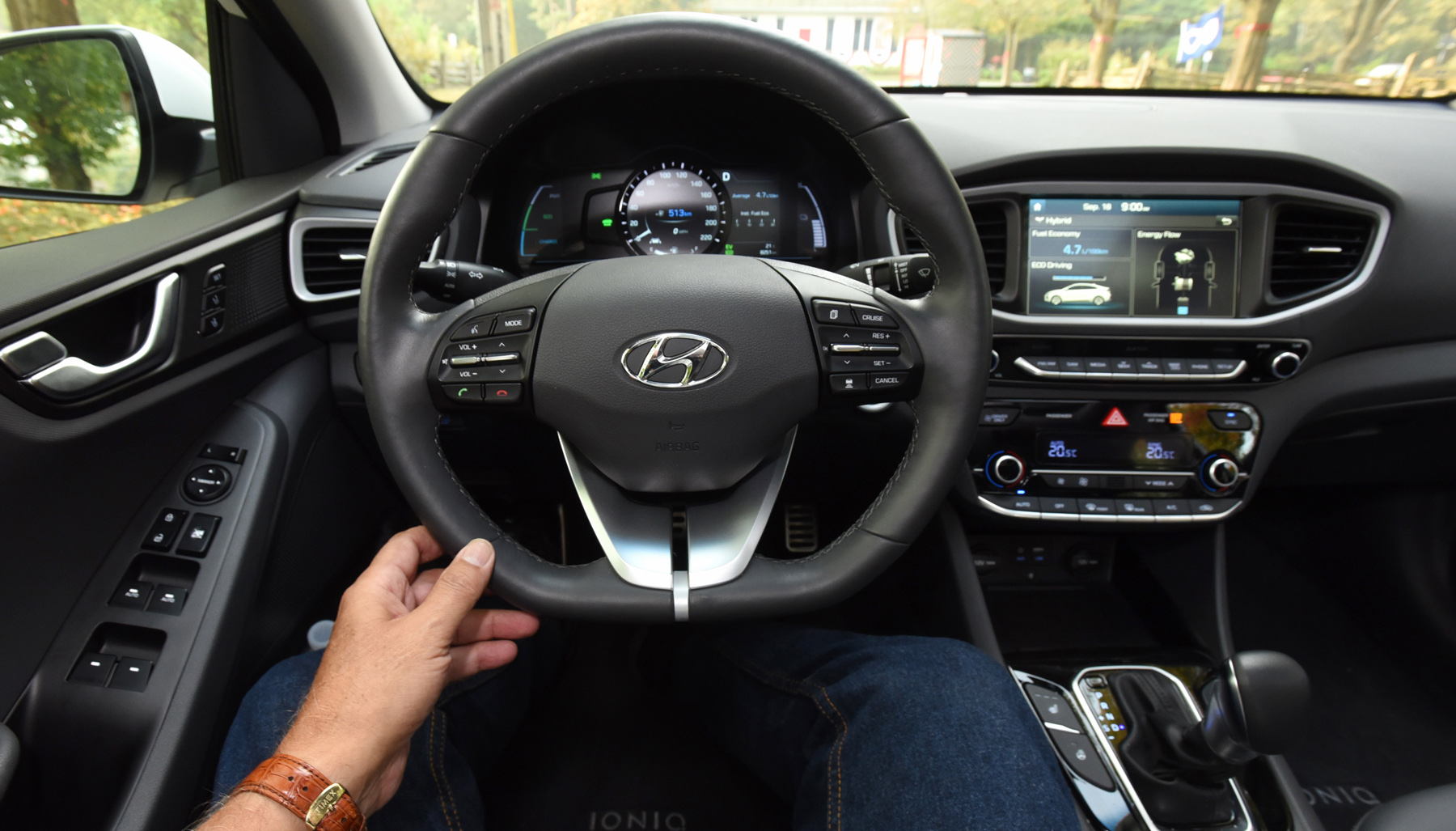 The power pack is bigger than the hybrid’s set-up but under-the-rear-seat positioning means that passenger volume is unaffected (still 2,724 litres), while some intrusion into the trunk space cuts cargo room by 100 litres (650 litres).

The bigger battery pack is inevitably heavier as well, but the effect on performance seems minimal, balanced by the immediacy of electric torque and the handling benefits of a low centre of gravity. 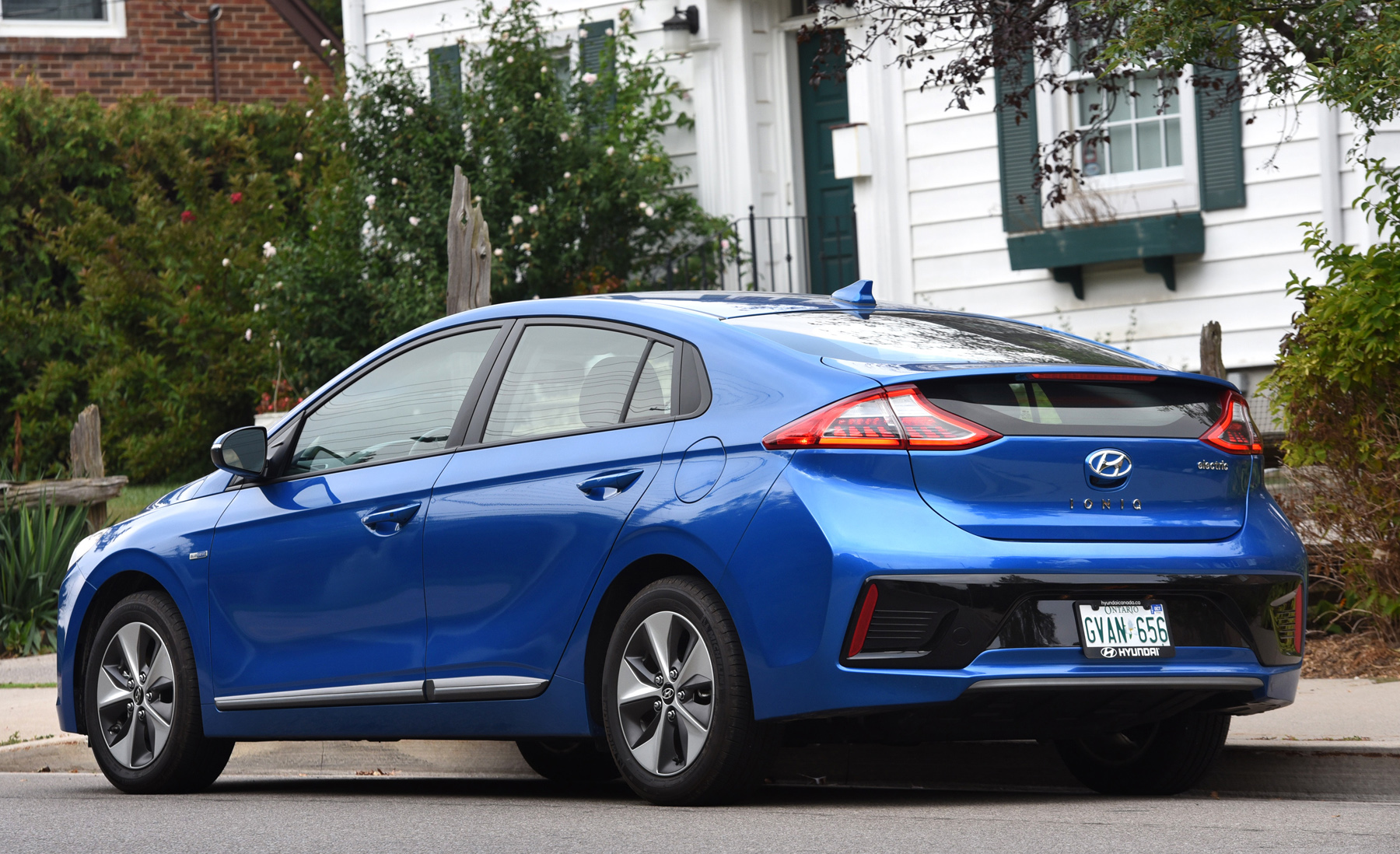 The Ioniq Electric’s range is listed as 200-plus kilometres and, in my case, seeing a 234 km range potential light up on screen every morning certainly alleviated any range anxiety.

Flick on the A/C and you will see that range potential drop to around 220 kilometres but the computerized prediction will vary and readjust depending on usage and driving demands.

During one session I drove 188 kilometres, finishing with 17 percent power and a leftover range of 35 km, so the range estimate proved pretty accurate.

As to cost, factoring in buffering and residual power in the pack, it would probably take about 20 kWh for a full recharge which, at my off-peak rate of $.077 per kWh, works out to about a buck and half, maybe a little more with hydro delivery charges added in.

That’s still cheaper than the 9.4 litres of gas I used to power the already thrifty Ioniq Hybrid for 200 km.

Consider also the provincial incentives ($14,000 in Ontario, $8,000 in Quebec and $5,000 in B.C.), a free pass onto HOV/HOT lanes courtesy of a Green Licence Plate, and the visceral joy of never stopping for gas and you’ve got reason to consider the Ioniq Electric, at least as a second car. 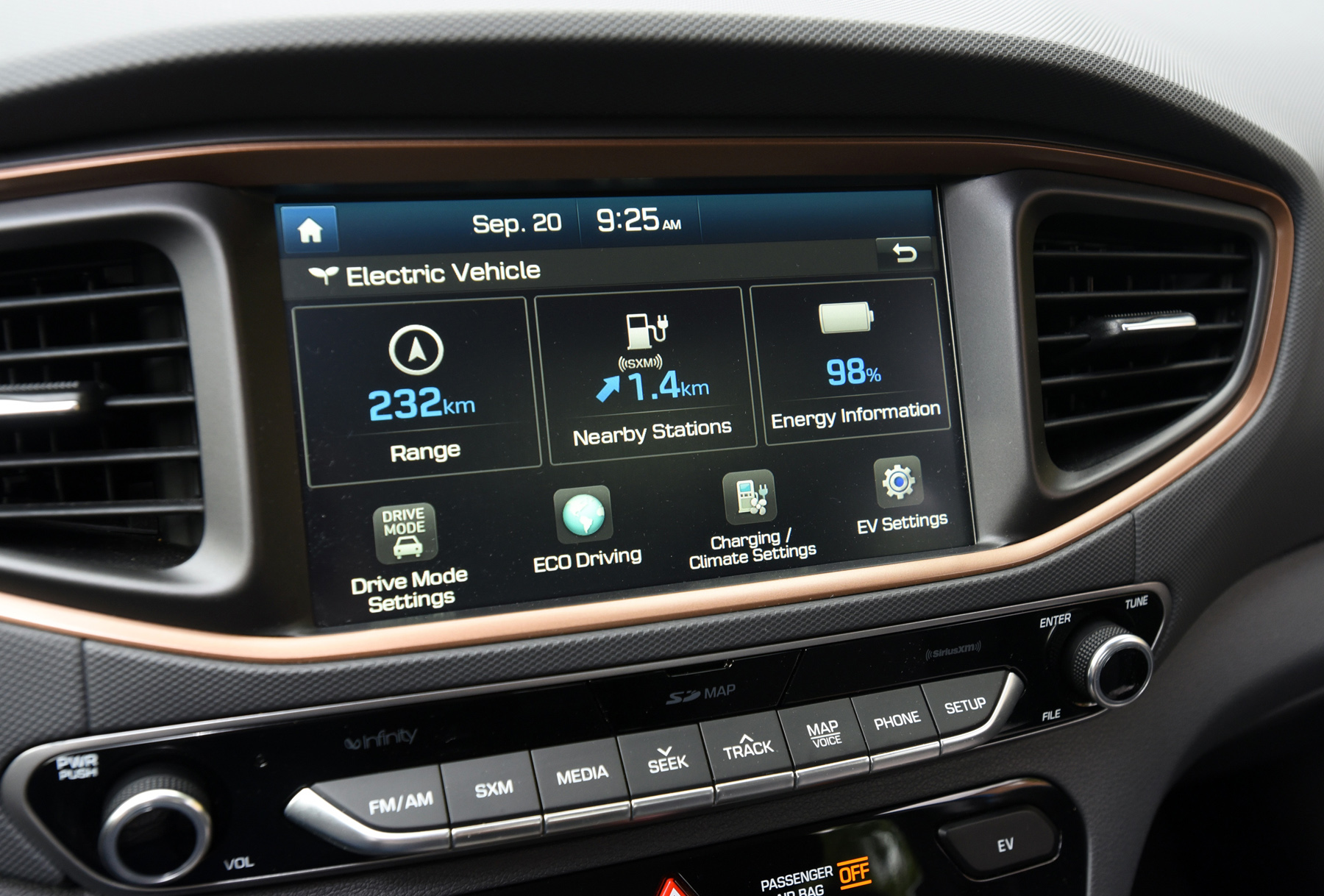 The Ioniq Plug-in Hybrid is due to debut late this year with price and particulars to be released at that time. While it wasn’t part of this test session I did have a chance to drive the PHEV during AJAC Car of the Year testing.

And with compromise components consisting of the 1.6-litre gas engine, 45 kW electric motor, 8.9 kWh battery and up to 40 km EV range, mixed with all the Ioniq pluses, it seems destined to slot into the sweet spot of the lineup.