The 2017 Hyundai Ioniq EV (Electric Vehicle) is recognizable by its blacked-out front fascia that does not require a traditional grille, as there is no radiator.

KELOWNA, BC: It can be argued Hyundai is the greenest automaker on the planet with the introduction of the new Ioniq line of envirocars.

Hyundai is the only automaker to currently offer for sale vehicles in all four electric segments – Hybrid, Plug-in Hybrid, all-electric (EV) and hydrogen electric fuel cell.

At the press introduction of Ioniq in Kelowna, BC, Hyundai Canadian president and CEO, Don Romano, talked about the scope of electrification that is gathering impetus seemingly by the month. 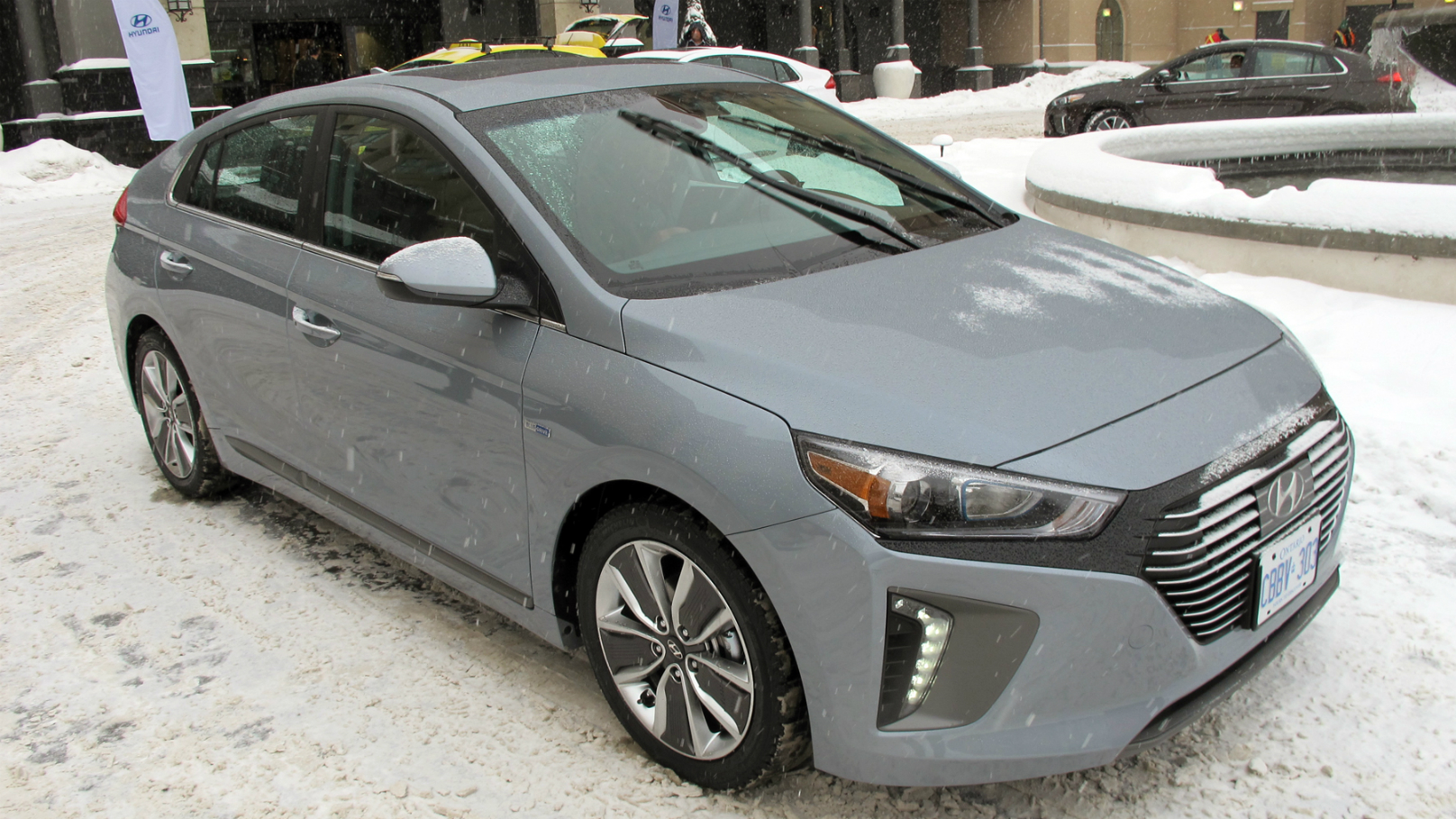 Hyundai Group (Hyundai, Genesis, Kia) will have 28 electrified vehicle models for sale by 2020. VW is expected to have 42 by 2025, while Toyota has pledged to cut greenhouse gases from its vehicles by 90 per cent by 2050.

More to the point, Romano said, some (US) $50 billion in investments have been made to date into electrification and automotive greenhouse gas reduction.

Which leads us to the Ioniq hybrid and Ioniq EV (electric vehicle) reviewed in Kelowna that will be followed shortly by a plug-in hybrid version and that’s just the beginning. 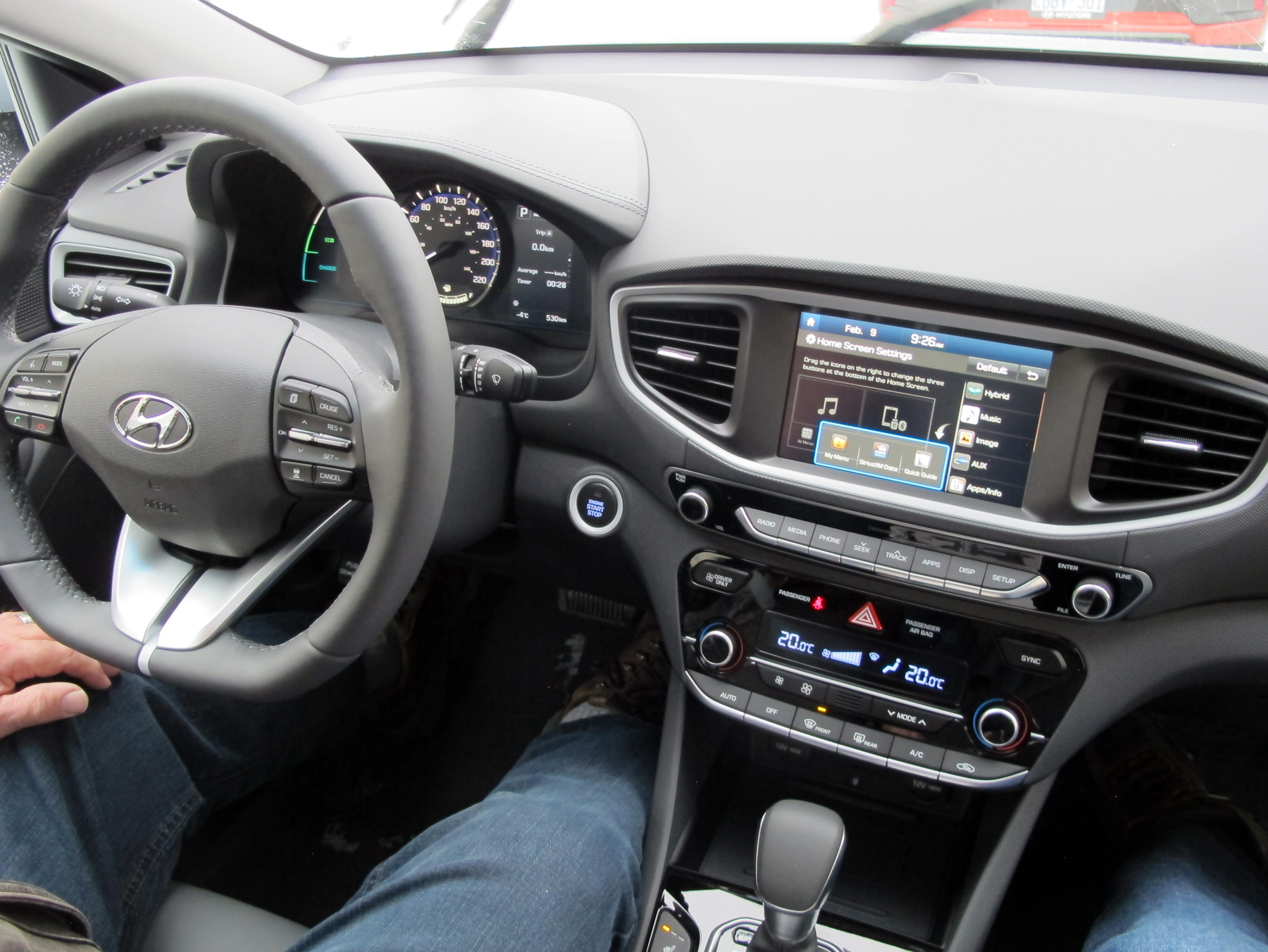 Romano pointed out this engine has a thermal efficiency rating of 40 per cent — a level thought unattainable two decades ago when 15 per cent was the norm.

It is mated to a 43 hp electric motor with 125 lb/ft of torque driving the front wheels through a six-speed dual clutch automatic transmission. A 1.56 kWh polymer lithium ion battery is shaped to fit under the back seat. 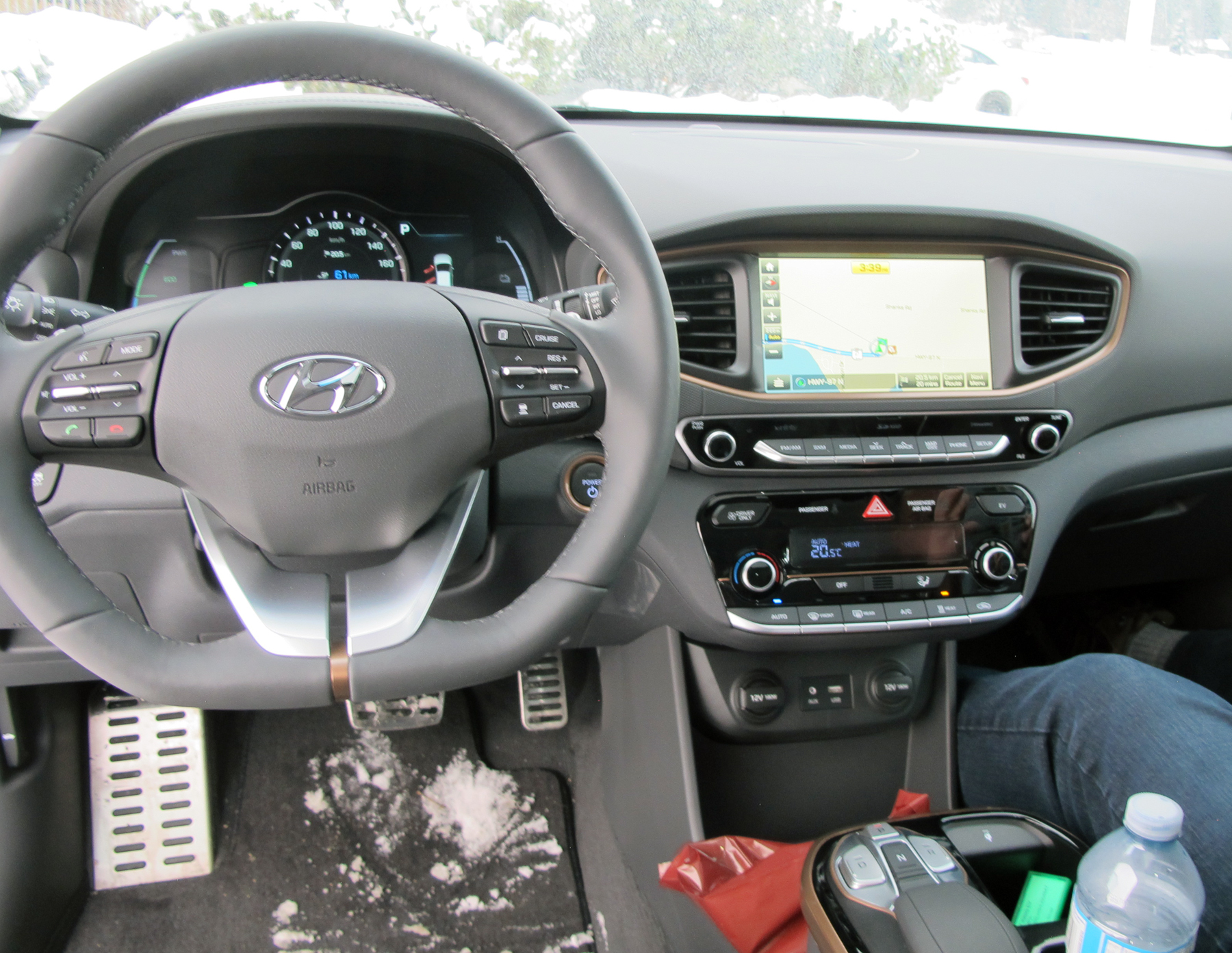 Hyundai says the range in Canada is up to 200 km, while in the U.S., it has a gasoline equivalency rating of 136 MPGe that Hyundai claims is the highest efficiency rating of any EV currently on the market.

Besides the propulsion system, aerodynamics play a huge part, with Ioniq having a drag coefficient of just 0.24 with the Hybrid and Plug-in Hybrid both featuring a three-stage active air flap built into the front grille.

The EV, because it does not require a radiator, has a closed, black front facia.

Ioniq employs air curtain technology to lessen drag that allows air to enter vents at the front that channel flow over the front wheels and out of the wheel well cavity. To this is added a functional rear spoiler and underbody panels that add to drag reduction.

But perhaps the most interesting part is the use of eco-friendly paint with ingredients extracted by soybean oil or the use of sugar cane in 25 per cent of the trim pieces such as the interior soft touch panels.

The ride-and-drive portion of the Ioniq launch happened as Kelowna was digging out of 25 cm of snow and -10 C temperatures, which surprised even the locals.

Kudos to Hyundai Canada’s PR head, Chad Heard, for having the foresight to bring along winter tires just in case, as we couldn’t have gotten very far otherwise. 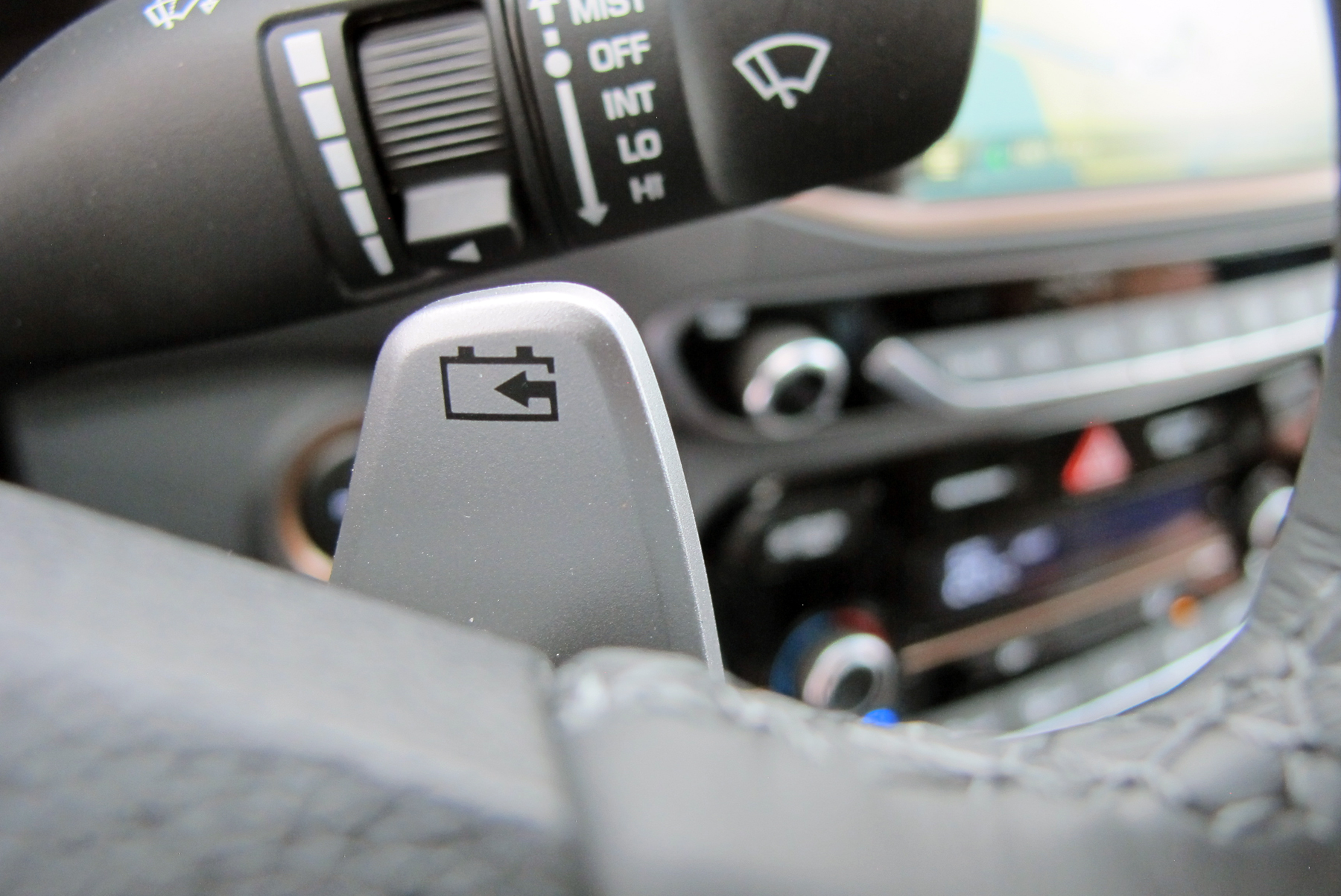 Driving the Hybrid was very much like driving the Kia Niro, which is not surprising as they share the same drivetrain.

Because of the extensive efforts to cut weight, the Hybrid feels fast and handles surprisingly well, as proven in a tight “track” Hyundai set up in a hotel parking lot where the Hybrid surprised a lot of people with its agility.

One of the features is a “Comfort” or normal driving mode and a “Sport” setting where one could really feel the extra power from the battery assist to the drivetrain.

But what impressed me most was the EV, which I did not get into until the afternoon drive back to Kelowna. 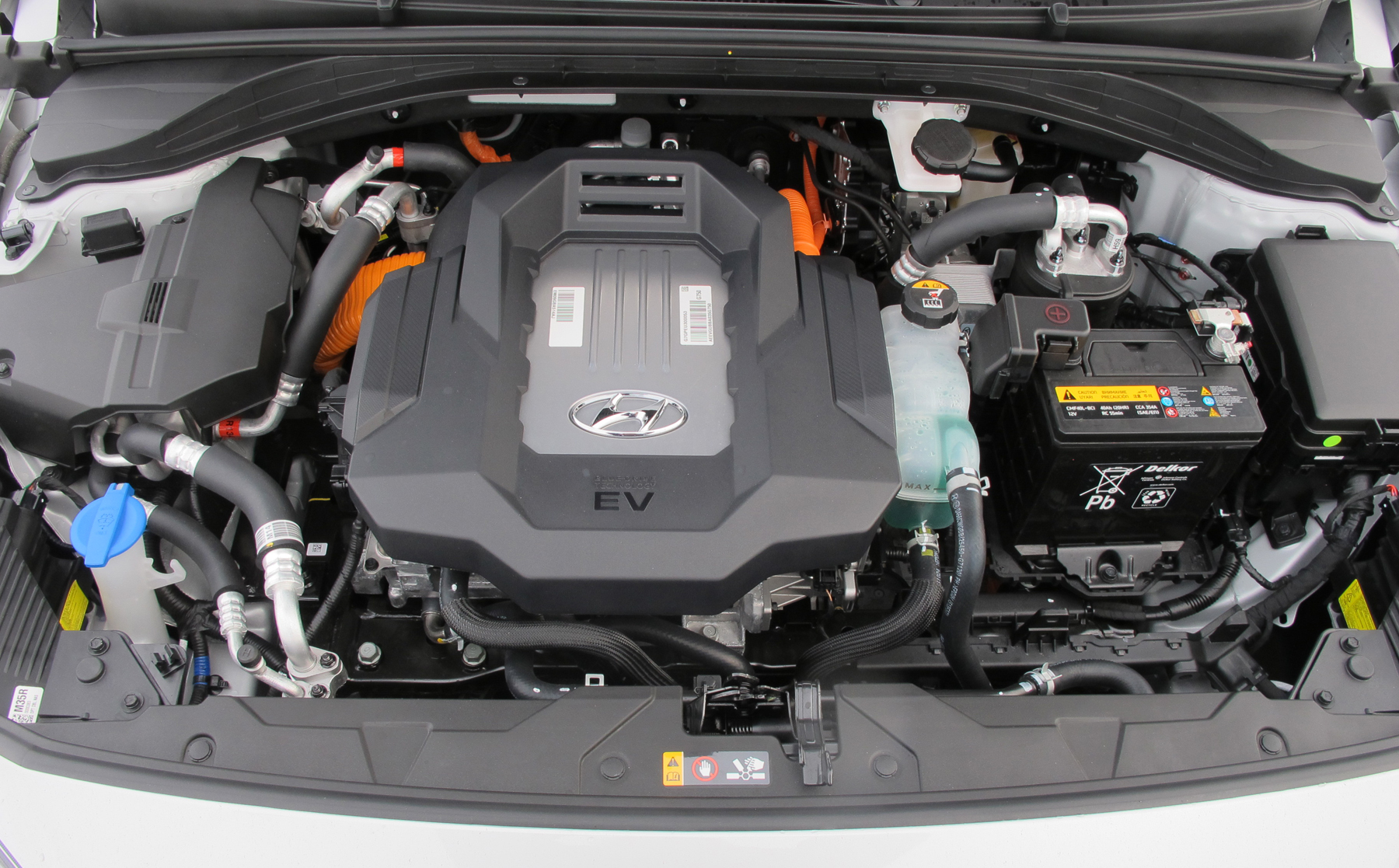 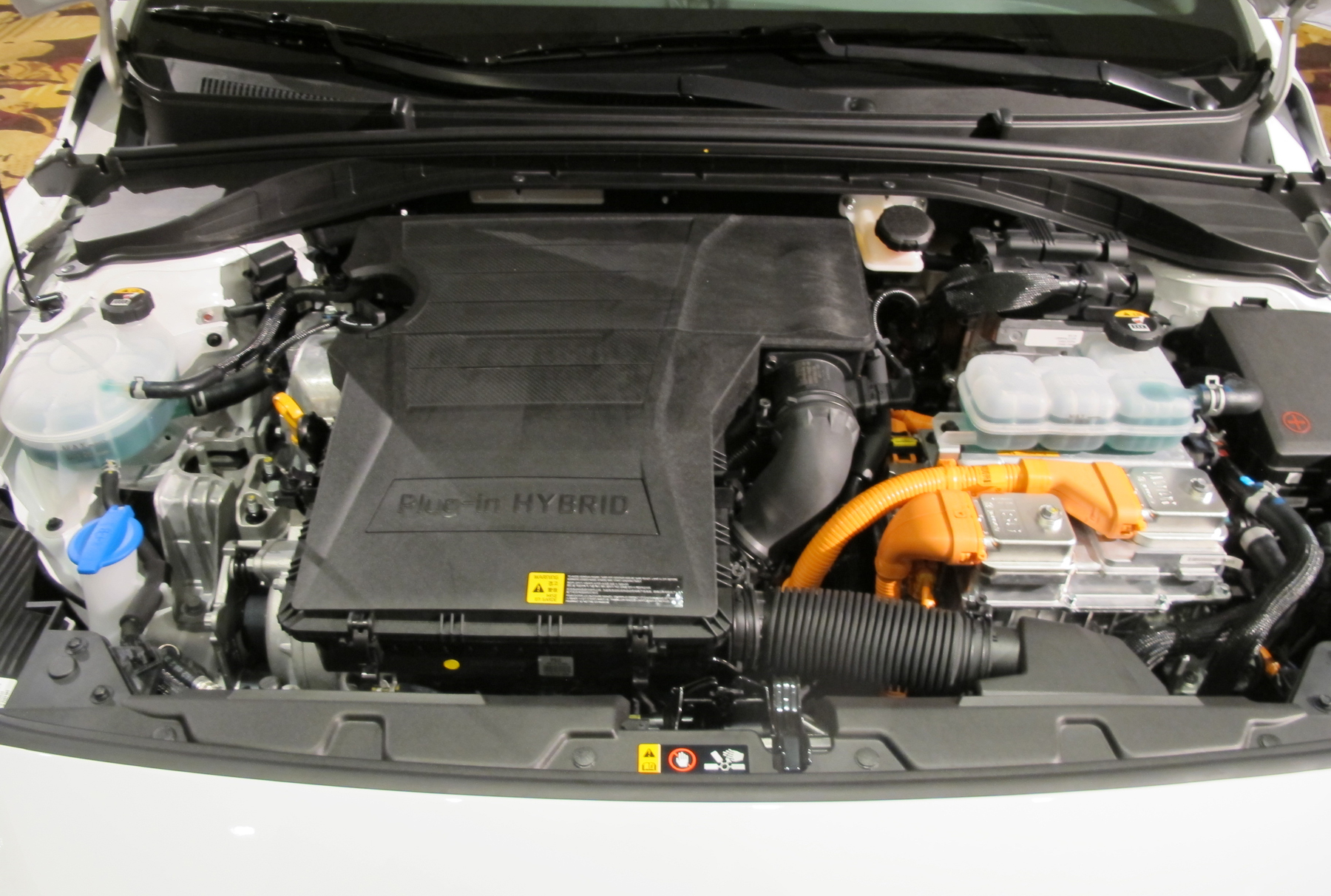 Minutes before leaving, I fell trying to cross what I thought was a snow bank, but was in fact a snow covered culvert, resulting in nailing my right knee on the sidewalk to the extent I needed help to stand up.

The EV has a set of steering wheel paddles that lets you increase or decrease the amount of power regenerative braking from a level of 0 to 3.

Because the EV had been driven by others all morning, the power gauge showed about one-third remaining, with 46 km to my hotel.

My knee was throbbing but my co-driver suggested I use Level 3, which I did and it was magic. 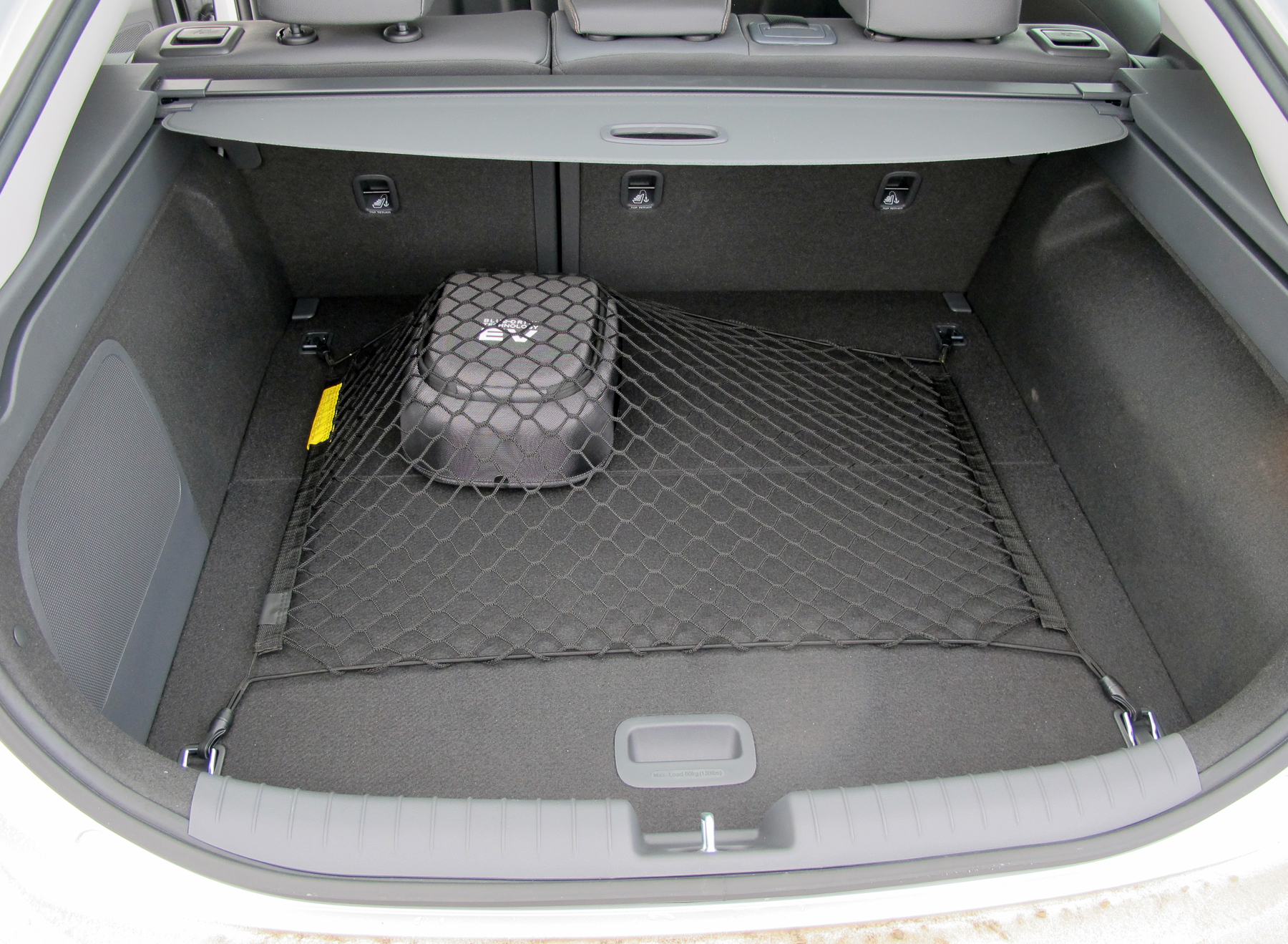 The regen was so strong, I let it do all the braking and I only had to touch the brake pedal at the last second for a full stop using a minimum knee pressure.

When I got back there still was an indicated 22 km remaining.

I had way too little time driving both Ioniqs, but it was enough to show Hyundai is going in the right direction, taking electrics from an interesting sideshow into the mainstream.

At this writing pricing has not been announced, but the starting price for the Kia Niro Hybrid is $24,995, which means the Ioniq Hybrid should start well under 30 grand. 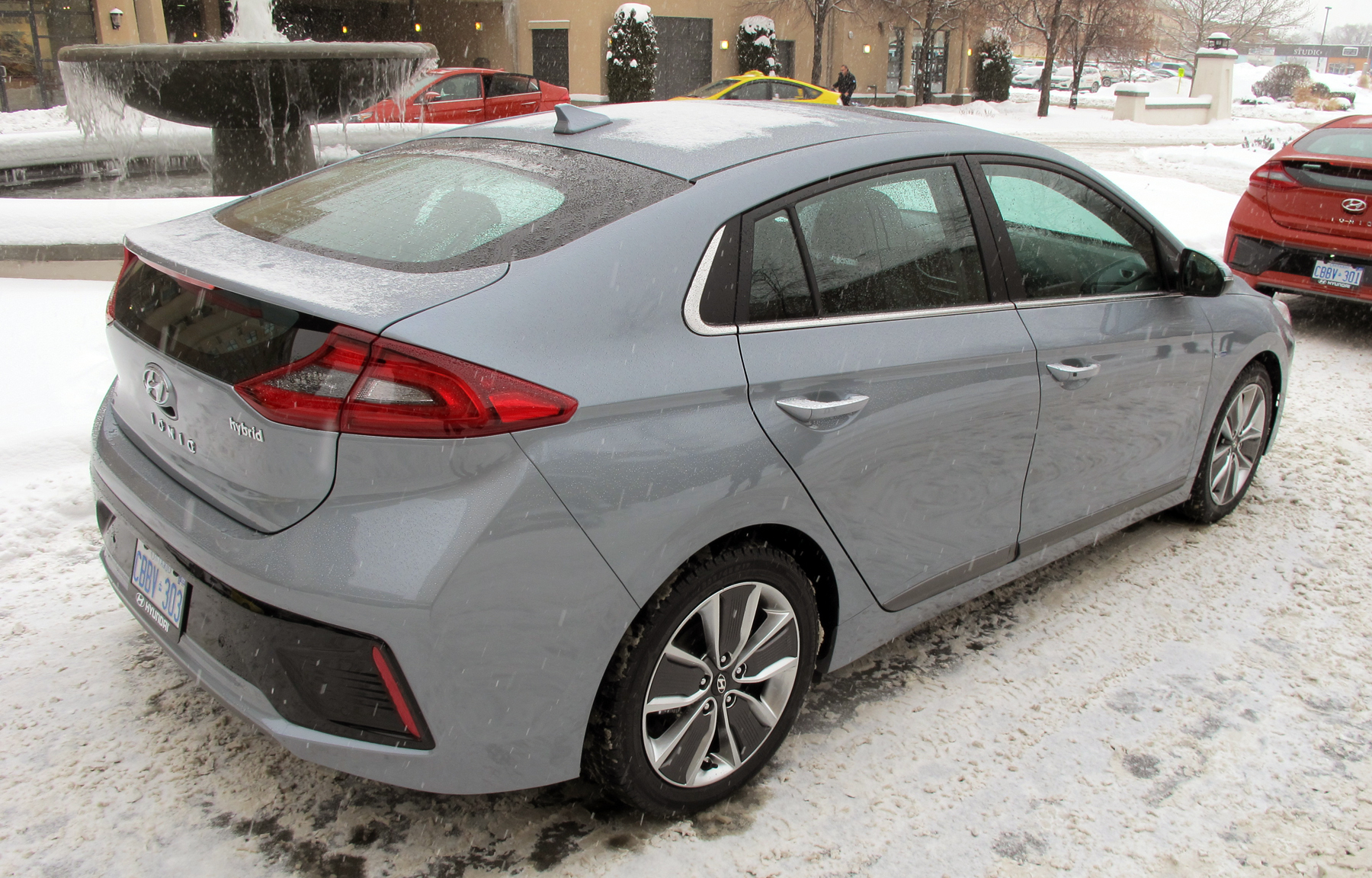 Honda and GM Enter in Partnership to Develop Two