First Drive: Although still gigantean on the outside the designers have managed to sharpen the lines at the front end and have incorporated Infiniti’s signature “double-arch” grille.

CHARLESTON, S.C. – The Infiniti QX80 certainly has road presence; and it always has been big, bold and not hard to miss on the road.

While still the same size the newly refreshed 2018 model has had its exterior looks altered to make it more appealing on the outside with the interior being upgraded to stay in line with its luxury reputation.

The people-mover or minivan has fallen out of favour over the last few years with the SUV taking up more of the slack in a crowded marketplace, but few SUV’s really have the space nor passenger capacity to be a real alternative to the van.

The new QX80 certainly has all the size and space points covered.

Available in either a seven or eight passenger configuration the QX80 has more than enough space to comfortably seat the starting line up of any hockey team with all their equipment safely stowed in the luggage compartment and if that wasn’t enough it could competently tow the teams own Zamboni behind it at the same time.

Not only would everyone be seated comfortably, they would be seated in the lap of luxury. 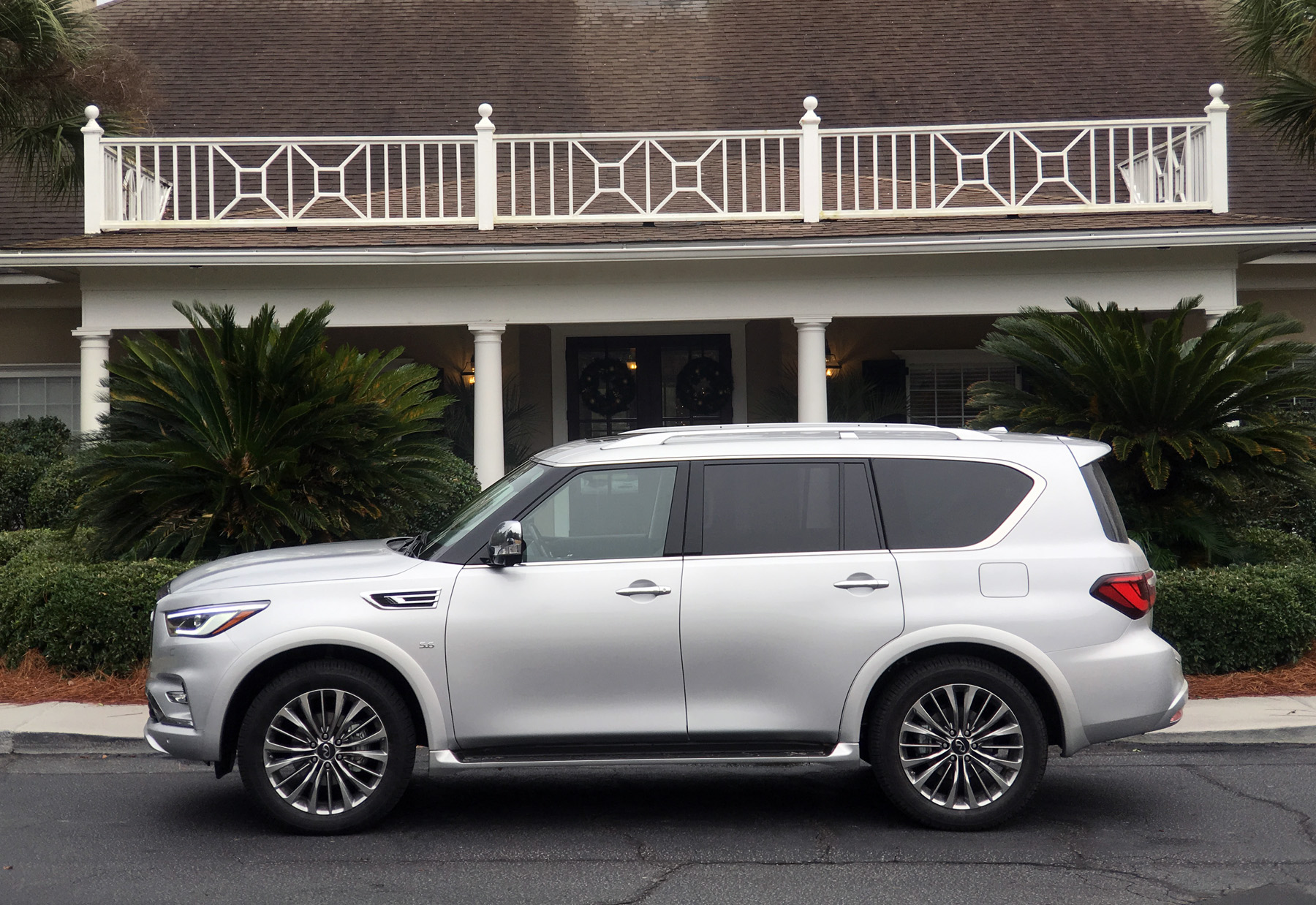 Although still gigantean on the outside the designers have managed to sharpen the lines at the front end and have incorporated Infiniti’s signature “double-arch” grille.  The clamshell hood has been extended by 90 mm and raised by 20 mm giving a stronger squared off front end with functional air vents added to the fenders to maximise airflow to the engine.

The new “eye-inspired” LED headlights sit higher and flow around front corners, at the rear the taillights have been thinned out and connected together by a chrome strip that runs the width of the body. Both the front and rear bumpers have been raised giving the impression of a higher centre of gravity.

Everything remains the same under the hood with the huge 5.6-litre V8 engine that pushes out 400 hp and 413 lb/ft of torque. It is matched to the same seven speed automatic transmission that puts power to the road through a rear axle biased four-wheel-drive system.

The QX80 is being targeted directly to an affluent market segment and the interior of the QX80 clearly demonstrates that Infiniti means business.

The internal cabin is cathedral like with plenty of head and leg space in all three rows. Infiniti have modeled the interior space on that of a private jet, they have used only the highest quality of leathers and the fit and finish is exemplary.

The high standards of comfort have been extended throughout the cabin with both the rear two rows being finished to the same standard as the front driver and passenger seats. The second row can be equipped with a bench seat or eloquently liveried captains chairs.

All rear seating now has access to USB charging ports.

The dash, while busy, has a new eight-inch touch-screen display mounted centrally that takes care of most of the infotainment needs of the vehicle.

The QX80 comes with Infiniti “In Touch” connectivity that now allows personalized driving characteristics and infotainment settings to be stored for up to two drivers.

Rear seat passengers have an independent entertainment system that now supports input from the new HDMI auxiliary port, in addition to a media USB port. This enables the system to use a number of sources, including portable Blu-ray players, game consoles, smartphones, tablets, USB and memory.

Both eight-inch high-resolution screens are controlled via remote control and can be used independently of each other.

One of the best new additions is the QX80 is the Smart Rear View Mirror.

It comes with a conventional mirror that has a display angle of approximately 20-degrees but with the flick of a switch on the mirror it turns the whole mirror into a digital display with a viewing area of 47-degrees. 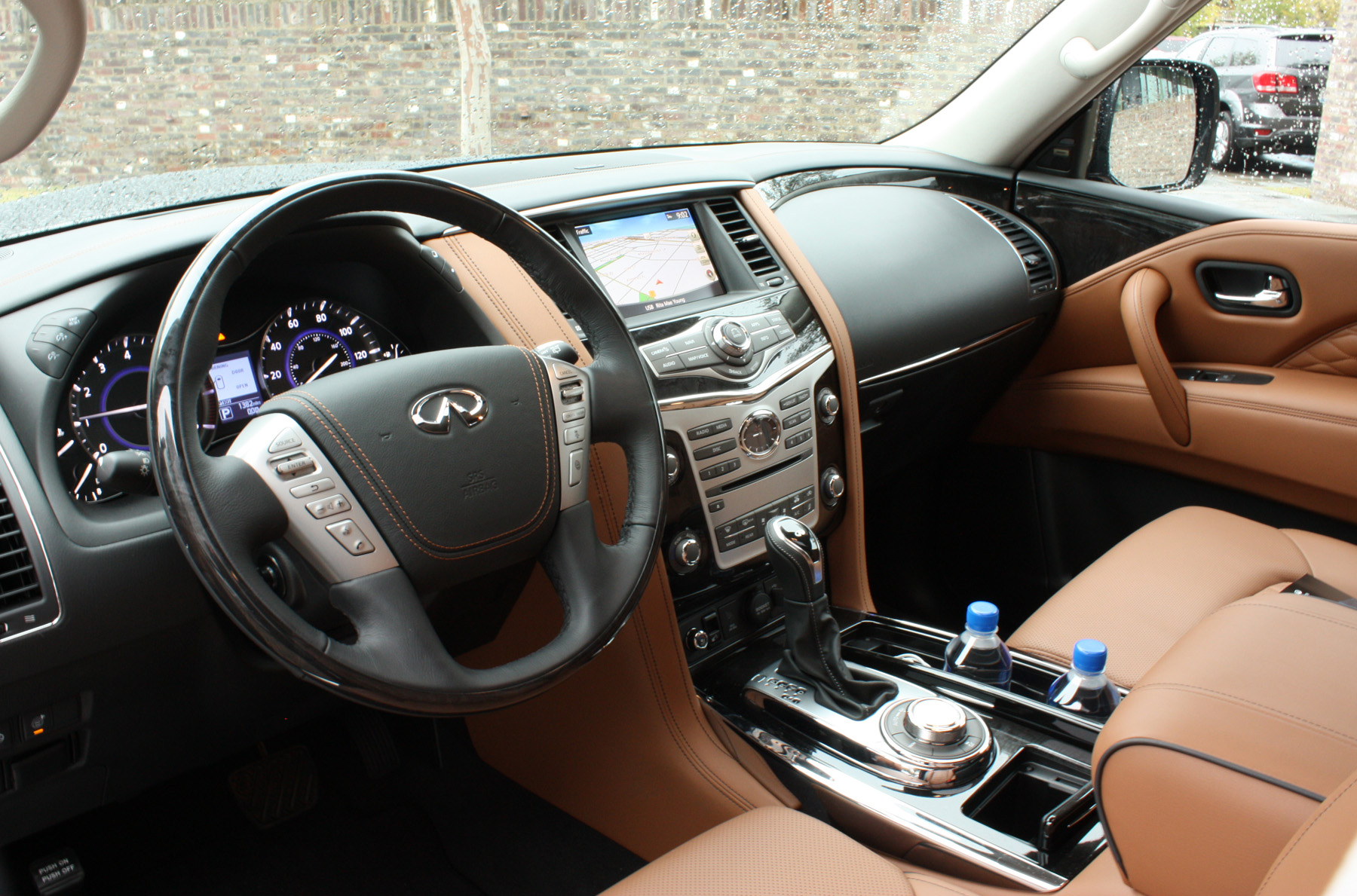 The image is sent from a camera mounted at the top of the rear windshield that eliminates blocked views from rear passengers or cargo. The greater viewing angle also makes the driver less reliant on wing mirror placement to be able to monitor blind spots.

On the road the QX80 is more nimble than you would expect from a full size SUV. Road noise is kept to a minimum thanks to extra insulation being added to both the cabin and windows.

A new hydraulic body motion control has been added to the suspension that monitors body lean and roll as it enters corners adjusting the suspension accordingly to make keep it as smooth and flat as possible.

Although the QX80 won’t win any drag race it will manage acceleration with ease and without much noise from the engine. The drive is smooth and quiet throughout the cabin making sure that passengers are kept as comfortable as the driver.

The QX80 comes with all the usual drivers aids that you would expect from a luxury that includes: Intelligent Cruise Control, Lane Departure Prevention and Warning, Distance Control Assist, Predictive Forward Collision Warning, Forward Emergency Braking, Blind Spot Intervention and Warning and Backup Collision Intervention. All make the driving experience of such a big truck all the easier.

The Infiniti QX80 is certainly a capable SUV and can handle every day tasks in its stride, but its added luxury and technology that you wouldn’t normally expect makes driving such a big truck a pleasure rather than a chore. 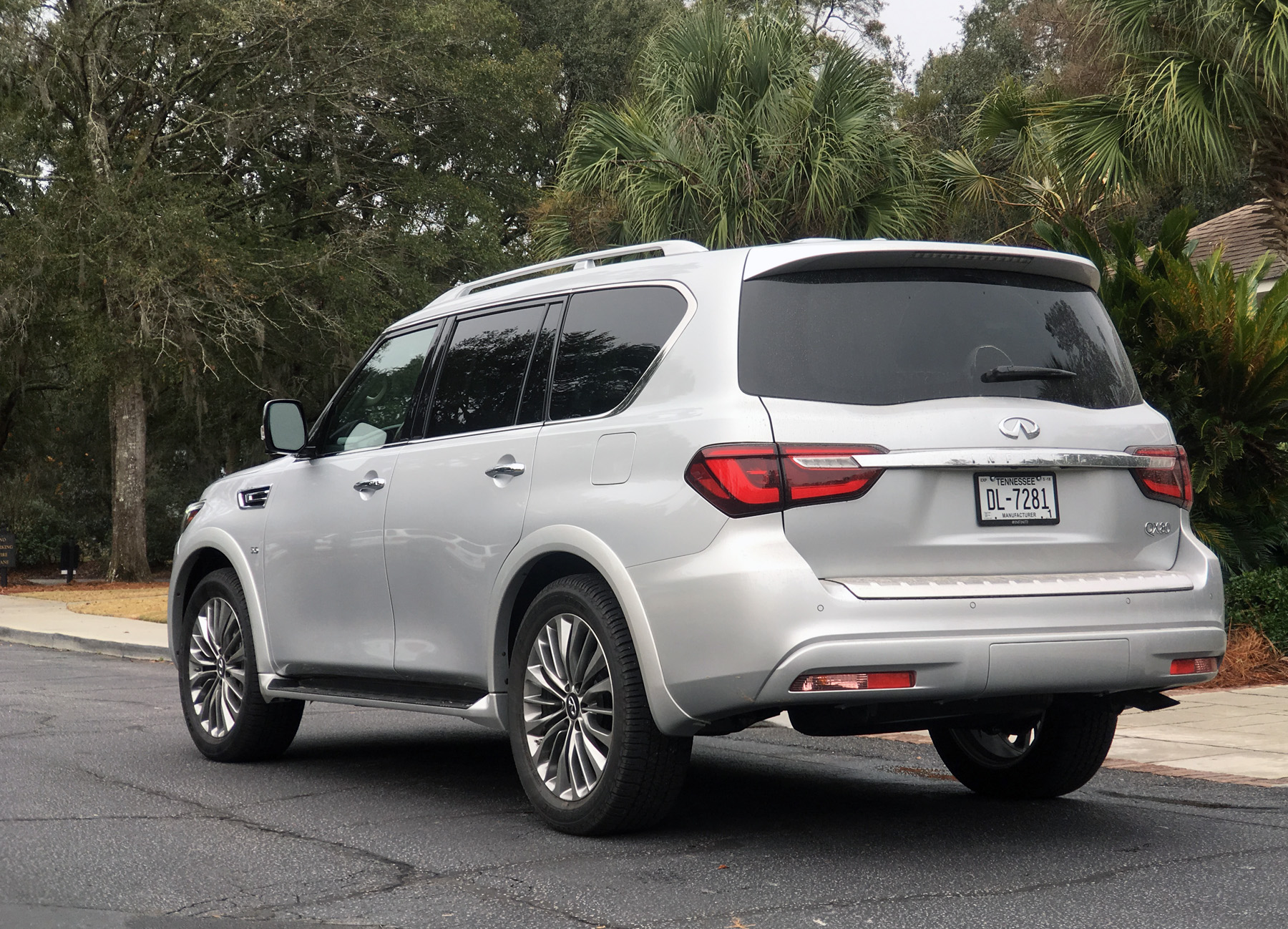 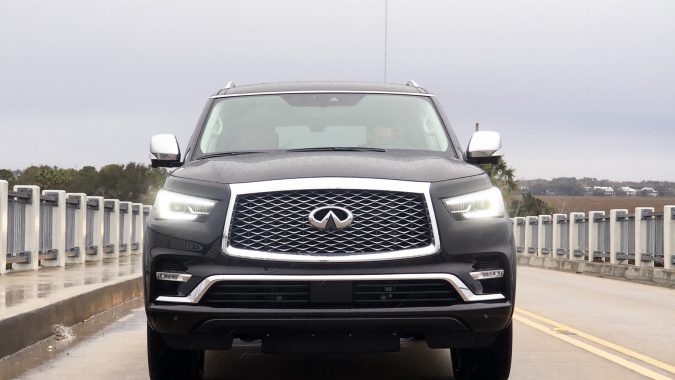 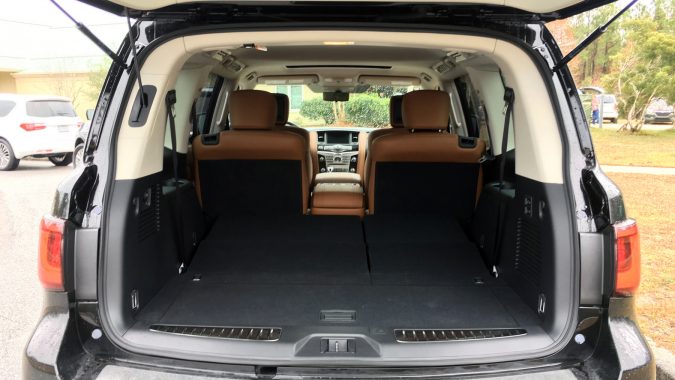 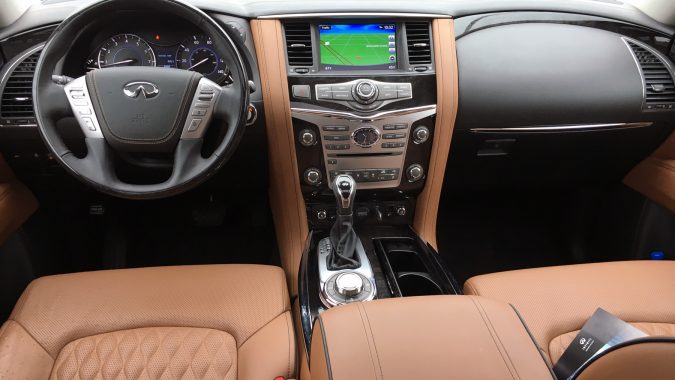 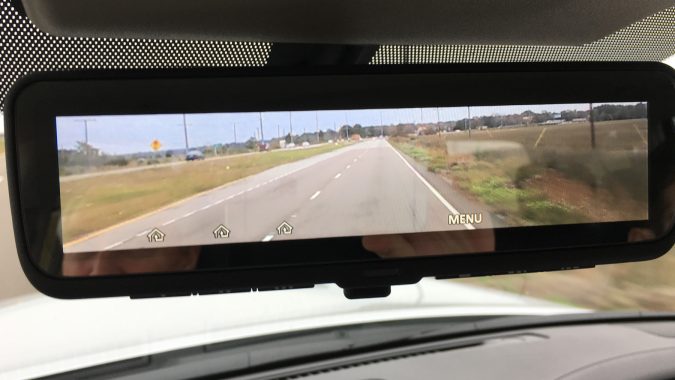 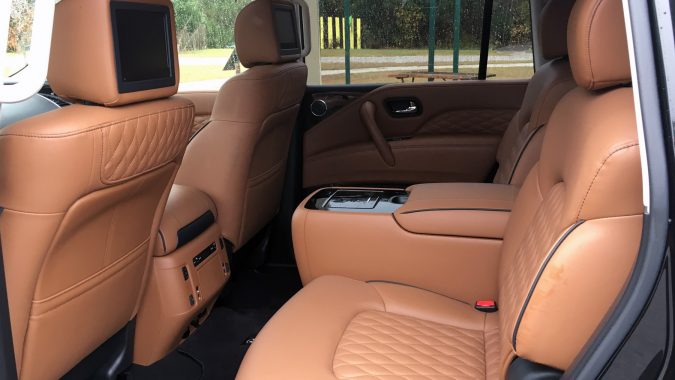 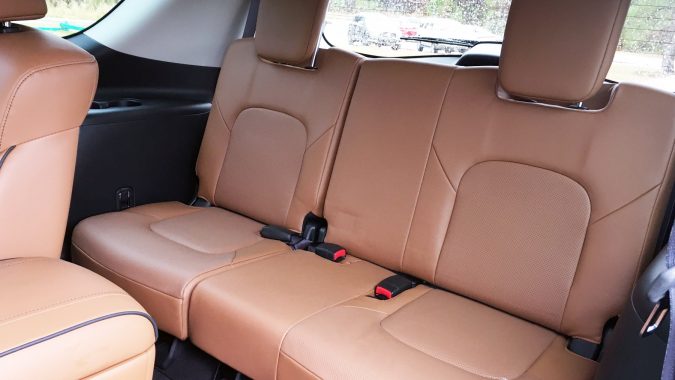 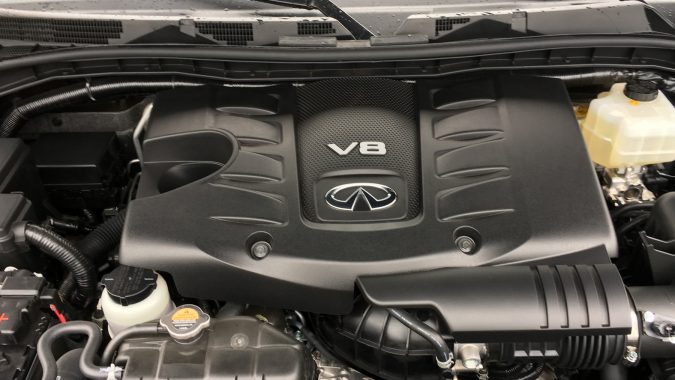 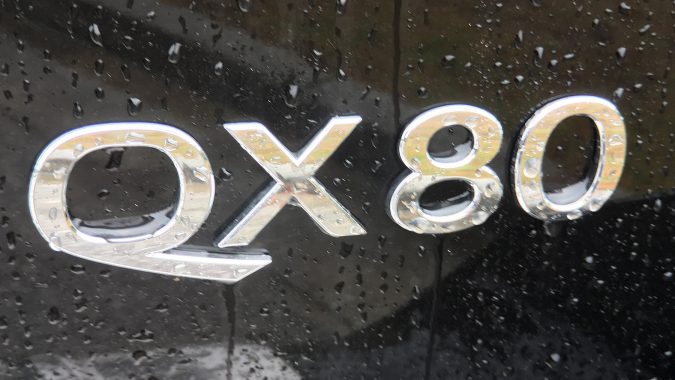