A year ago today, meaning Saturday, I was in Austin, Texas, to attend the Grand Prix of the United States. Except in 2017 it was Friday and I was starving.

It was four or five in the afternoon and a bunch of us were all going to a steak house for dinner at eight, but I needed something to tide me over. So I was walking along Congress Ave. toward the State Capitol building, hoping to find a 7-Eleven or something similar where I could buy some peanuts or potato chips.

I was walking with my great friend Jock McCleary, a fellow automotive writer. Jock is a Scot who has lived and worked in Canada for a quarter of a century. But if you should ever hear him talk, you would swear that he just got off a plane from Glasgow or Edinburgh.

I was about to give up and turn back toward our hotel when what to my wondering eyes should appear but a store with a yellow and green sign and the word SUBWAY on it. “Here we go, Jock,” I said. “I can feel my blood sugar going up already.”

My friend McCleary was clearly not impressed. “We will be spending the weekend in the Paddock Club at the Circuit of the Americas,” he said. “Waiters wearing white gloves will bring us lattes and blueberry pancakes. Tonight, in just a few hours, we will be tucking into prime rib and strawberry shortcake. And you want to go to Subway???”

We went in — it was either that or faint dead away right there on the street — and he watched as I wolfed down a six-inch turkey breast and ham on brown and a Coca-Cola. “I will never let you forget this,” he said.

And he hasn’t. Starting at the steak house that night, and then the Paddock Club all weekend, and every time we’ve been on a trip together since, my friend Jock McCleary will say, in that booming Scottish brogue of his: “How does Norris McDonald spell fine dining? S-U-B-W-A-Y.”

Now, I had gone to Austin to get more familiar with the relationship between the Infiniti luxury vehicle division of the Nissan Motor Co. and the Renault Sport Formula One Team. As a guest of Infiniti, I — and other journalists, McCleary included — was given exclusive access to the Renault F1 garage and arrangements were made for me (us, really) to chat with Renault F1 driver Nico Hulkenberg, the team’s managing director Cyril Abiteboul and Infiniti’s global motorsport director Tommaso Volpe.

It was during those conversations that I came to realize that the Infiniti-Renault relationship is much more than a sponsorship, that they are full technical partners and the development of things such as the Energy Recovery System used by the racing team is just one of many things being passed along for use on Infiniti’s performance road cars.

I had all of this in mind, six weeks ago or so, when I set out to drive around for a week in an Infiniti Q60 Red Sport 400 coupe, an all-wheel drive speedster that boasts a twin-turbocharged V6 engine that delivers 400 horsepower and 350 lb.-ft. of torque.

And it just so happened that I had the car at the same time as the NASCAR Camping World Series weekend at Canadian Tire Motorsport Park was on, so I felt right at home bombing out from my home in Mississauga to the legendary Grand Prix circuit north of Bowmanville and doin’ just a little showin’ off in the car once I arrived at the track.

I will not go into detail about the showin’ off. But let me tell you about the car — at least the things that I think are important about this car, which is chock full of technology and comfort. 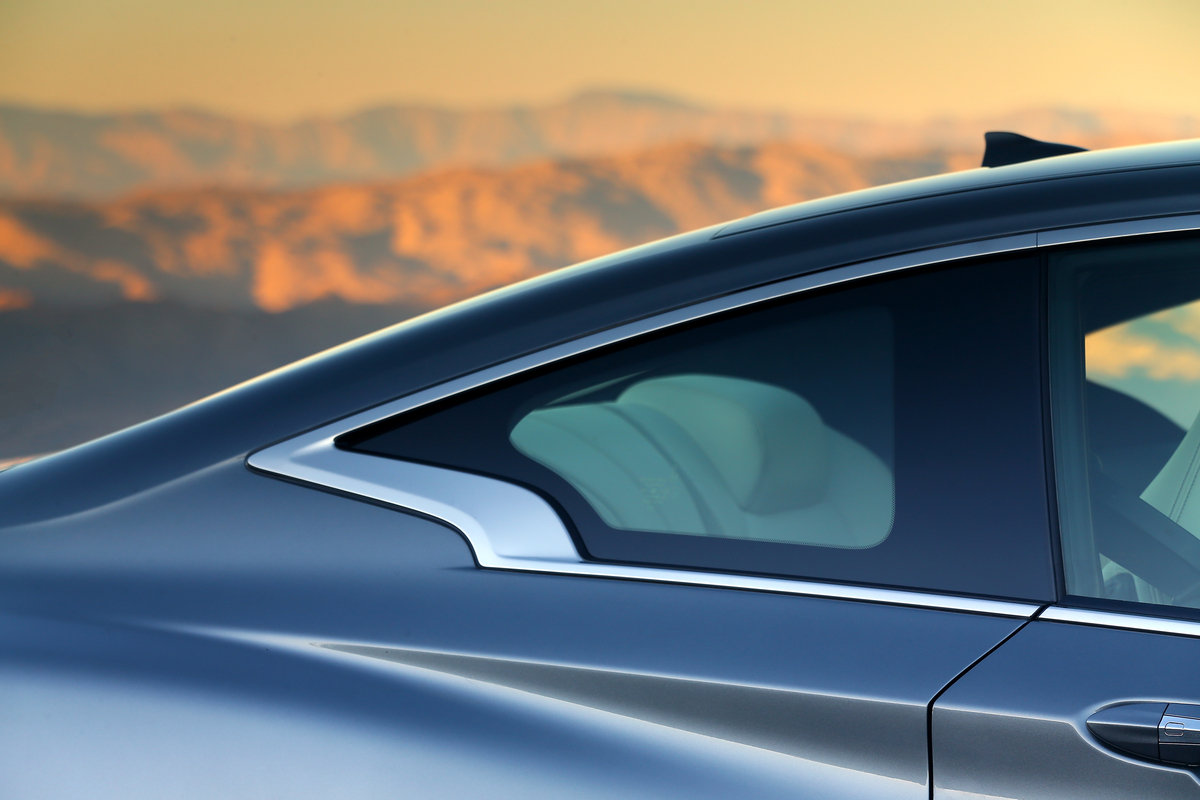 First, this is a gorgeous car — the third-generation design since Infiniti entered the sports coupe segment. Heads turn when you drive past. It’s lower and wider — the narrow side-mirrors help to emphasize this — and it’s an attention-getter with 20-inch wheels and all-season performance tires.

Features such as the double-arch grille (inset from the body) and the C-pillars that are crescent-shaped make clear that it’s an elegant car and a muscle car, all at the same time. In short, it’s a looker.

Much is made of interiors by all the car companies these days but, unlike exteriors, of which there are usually differences, there is not a whole lot you can do with the inside of a car. The driver’s seat is behind the steering wheel; the passenger seat is across a console, the back seat either has room for three people comfortably, or it doesn’t (in the case of the Q60 I had, it does). And there is room for cargo (the Q60 passed the set-of-golf-clubs test easily) and so-on.

The interior features of the Infiniti Q60 centre around leather seating, other materials and colours — of which three are available: Graphite, Monaco Red and Gallery White. There are trim accents, too, ranging from Aluminum in the lower-priced models (there are five models, by the way), to Carbon Fibre to Silver Optic Fibre in the top-of-the-line Red Sport 400.

I drove to Indianapolis last spring in another manufacturer’s sports coupe, and by the time I got there, I hurt just about all over. (No, I am not going to ID the car because it did have other redeeming qualities.) Although I was not in the Q60 as long every day during the week I had it, I was in it long enough to know that when it comes to driver comfort, it passed with flying colours.

I suggest this is because of the Infiniti’s high-back, ergonomic seats that are designed to keep your thighs from binding up. The seats (this includes the passenger seat, too) are designed to provide back support and to minimize pressure on certain muscle groups.

Whatever it is they’re doing, it’s working. The next time I drive to Indy, I’m taking a Q60.

Standard in all Q60s is the InTuition central control system that allows you to personalize your environment, from temperature adjustments to seating positions to audio-visual settings. Plus, you can set up your entertainment and communication features.

There’s a great scene in an old James Coburn movie called The President’s Analyst when he escapes from the White House and is “rescued” by a middle-class family from New Jersey. The husband/father is showing off all of his modern “toys” and, at one point while they’re riding in the family car, turns up the radio so loud that nobody can hear anything. He turns to Coburn and mouths the words, “Total Sound.”

Every time I’m in an Infiniti or Nissan vehicle, and I turn up the Bose Performance Series Audio System with 13 speakers that’s available on all 2018 Q60s, I think of that scene. Connect it to your CD player or your MP3 and crank it up and you have Total Sound. And if you don’t have it all the way up, the Q60’s noise cancelling technology (it keeps engine noise out of the cabin) only lets you hear what’s coming from the speakers anyway.

The only thing I ever worry about is hearing a siren if there’s an emergency. I’ve never been in that situation but I am assured that I would be able to hear the emergency vehicle over my (very loud) Jefferson Airplane CD and I hope that’s true.

Standard on all Q60s is the InTouch communications system. Two large touch-screens let you connect to your phone, key in the navigation, toggle back-and-forth between AM, FM and Sirius XM and operate that Bose entertainment system. This whole thing just rocks.

This is a sports coupe. You mash the gas and you go. There is no hesitation, let me assure you. 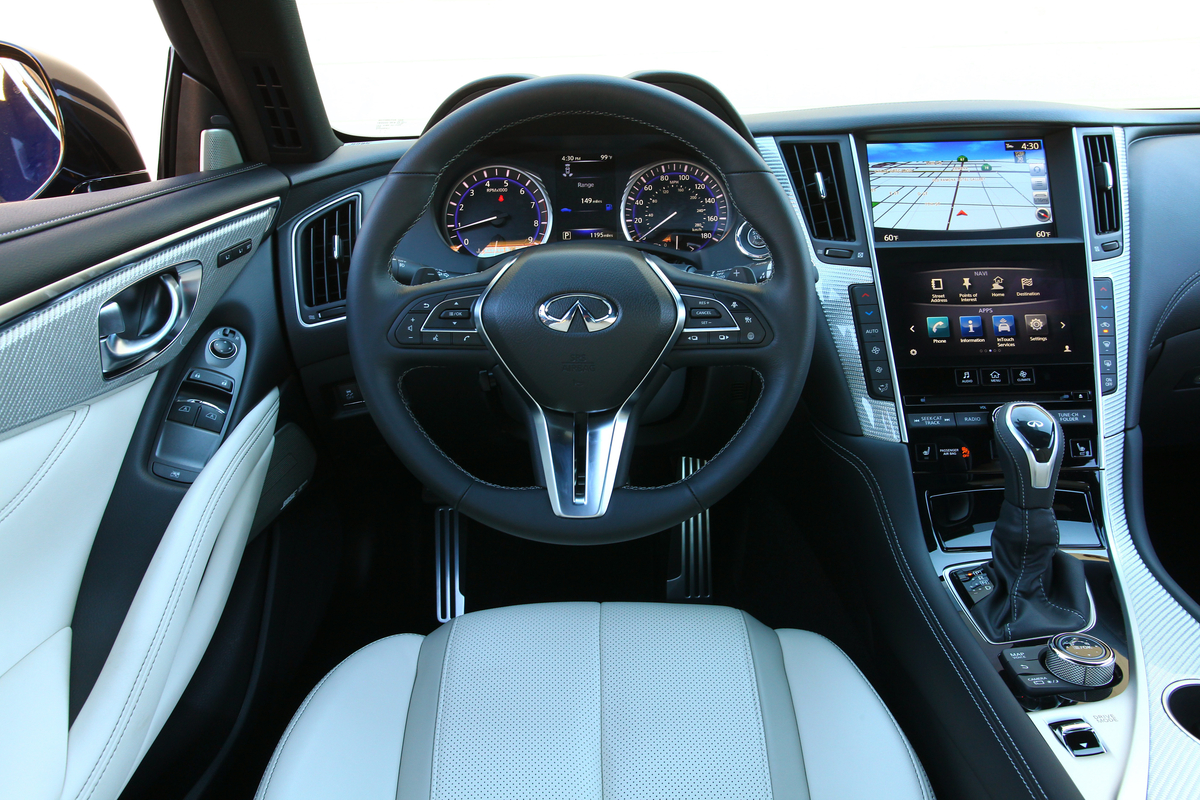 The Q60 has two suspension systems — the standard, which is tuned for the handling the layman would expect from a sports coupe, and an electronic suspension system called Dynamic Digital Suspension, which is for best-in-class handling responses and enhanced ride comfort but only standard on the two most expensive models.

You can change the suspension by putting the electronically adjustable shock absorbers in either Sport or Sport+ modes and this will stiffen everything up and result in more agile handling.

Available as part of the ProActive Package on the three top dollar models, Direct Adaptive Steering — in which the system “reads” the road surface — means the driver doesn’t have to make as many steering corrections as she would with a conventional system. In fact, according to company literature, a wide range of steering customization can be accessed through the Drive Mode Selector, which is a completely personalized handling system that can be calibrated — are you ready for this? — 336 different ways.

The Q60 has a drag coefficient of 0.28, which keeps the coupe stable at high speeds. The car’s hood is also shaped to reduce drag (and I particularly liked that because you could almost look straight down on the road). And Intelligent All-Wheel Drive distributes the torque evenly between the front- and rear wheels but will go 100 per cent rear, or even assign power to all four wheels individually, if the system detects a lack of traction.

Every time I review a car, I do the same thing. I get going at or about 100 km/h and I slam on the brakes. (I do this when I’m alone on the road, by the way.) I want to know if the thing will stop on a dime, or pull to the right or left (as happens on occasion with some cars). Most cars pass, though, as did the Q60.

Here’s something I found kind of nifty. It’s autumn and — with a nod to Gordon Lightfoot — the winds of November will soon be blowing. I hate it when I’m getting out of a car and a big gust comes along and blows the door closed with your leg still out. Ouch, that can hurt.

But the Q60’s flexible stop position doors are designed to prevent that from happening. The doors will stay open in nearly any position and won’t spring back on the occupants.

I want to thank Infiniti for thinking of this and I bet other manufacturers will have this feature on their cars in the near future.

As is the case with most manufacturers now, all the usual driver safety aids and protections are included, such as Around View Monitor, Intelligent Cruise Control with Distance Control Assist, Forward Emergency Braking with pedestrian detection, Lane Departure Prevention, Blind Spot Intervention and Backup Collision Intervention.

Did I miss anything? 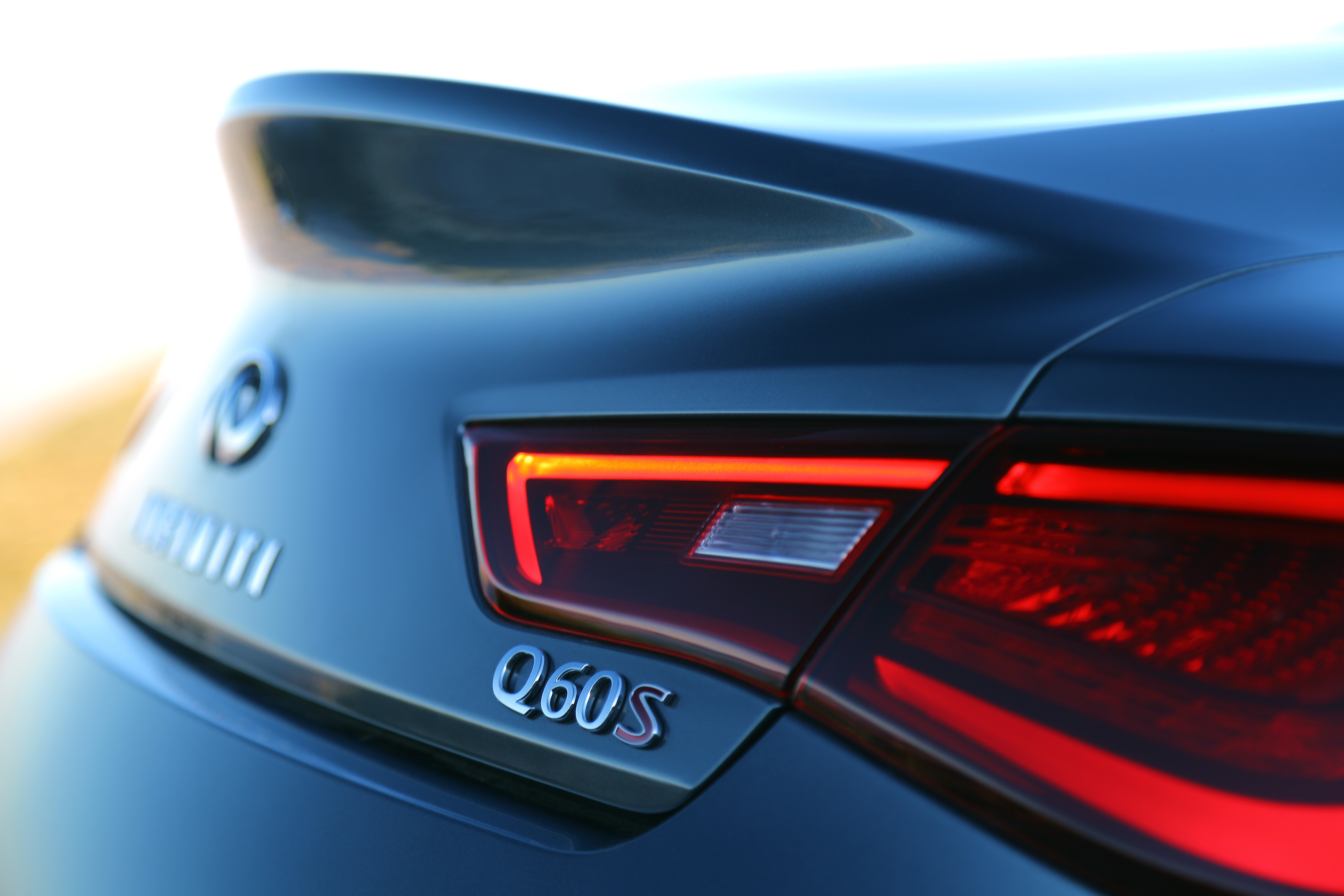 I only have one. Yes, I was driving a top-of-the-line sports coupe with all the bells and whistles but when I went to gas up after my second round trip to Old Mosport, I opened the gas flap and it said that I should only use premium fuel. I was at a Petro Canada, so that meant Ultra 94, which is Ultra expensive.

However, one of the racing series I was covering that weekend was the Ultra 94 Porsche GT3 Cup Challenge Canada by Yokohama Series and it was worth the price of admission to see driver Zach Robichon race. So I figured if Petro Canada was sponsoring a Canadian racing series and promoting their Ulta 94 brand of gas, I should do my bit by contributing to the cause.

Which I did. But it was an expensive proposition, nonetheless.

Anybody looking for a car in this segment cannot go wrong by selecting the Infiniti Q60 Red Sport 400 coupe. Hell, any of the Q60s are worth it but when you’re looking at a price tag that’s north of $60,000, I say it’s best to go big or go home.

I enjoyed my time in this car and I’m sure you would too. 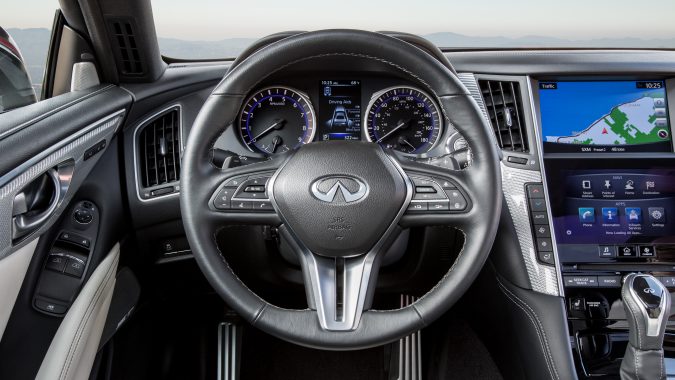 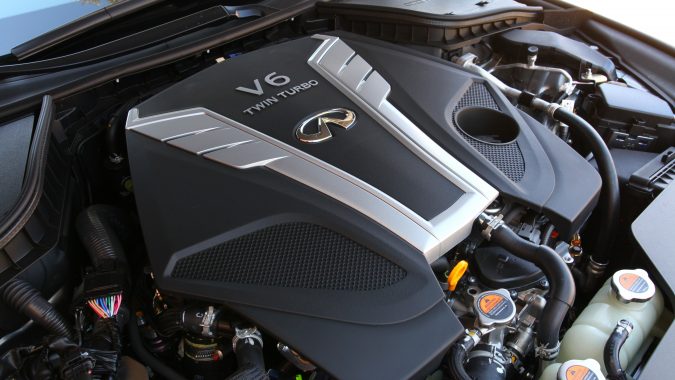 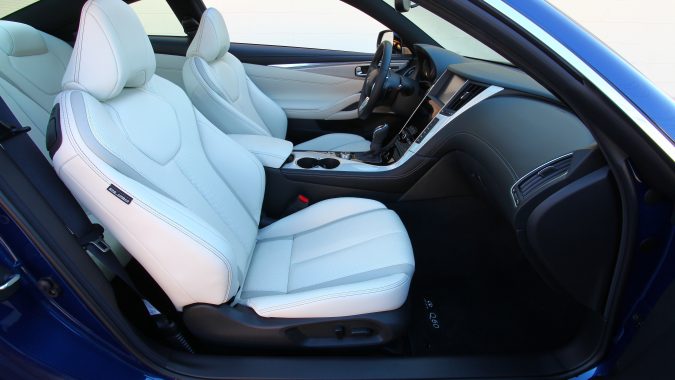 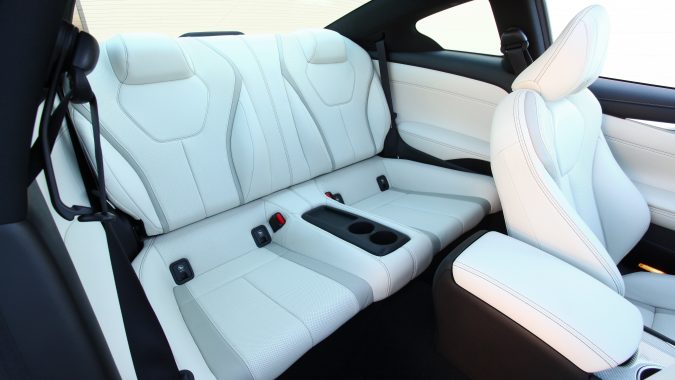