NASHVILLE, TN: At the launch of the Infiniti Q50 two years ago, I said that the brand had created a mid-size luxury sedan covering four sub segments with one car.

Now the Q50 is in the middle of what is called a “mid-cycle refresh” — meaning it is time for enhancing it until the next model comes along in two years or so.

All share the same platform, a seven-speed automatic transmission and, in Canada, standard all-wheel-drive. But where they differ is in the engine bay.

The 2.0T model has a twin-turbo, DOHC inline four-cylinder co-developed with Mercedes-Benz producing 208 hp and 238 hp on premium fuel. It is designed to go after entry-level luxury sedans such as the Acura ILX, Cadillac ATS and Mercedes CLA. The Q50’s advantage is being mid-size compared to the others, which are considered compacts. 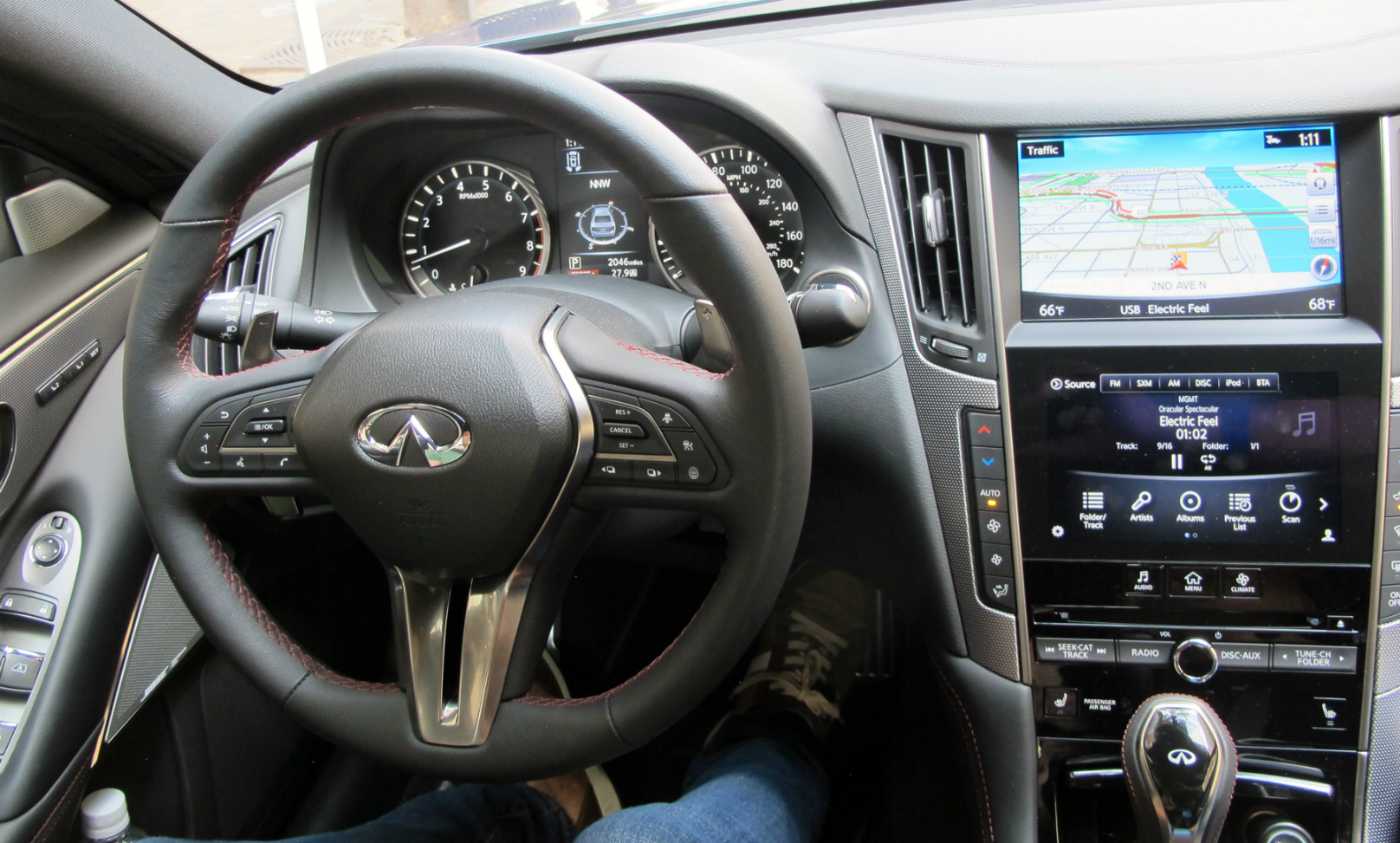 While Infiniti doesn’t plan to sell of lot of them, there will be a Hybrid for those who want luxury and fuel economy. It uses the Nissan hybrid system with lithium-ion battery, a 3.5-litre non-turbo DOHC V6 producing 302 hp and 258 lb/ft of torque coupled to a one electric motor/two clutch system with 67 hp and 214 lb/ft of torque for a combined 360 hp.

Next comes the 3.0-litre model, but in two forms.

Both share an all-new twin-turbo DOHC V6, but in two stages of temperament.

The “volume” model will be the 300 hp, 295 lb/ft of torque version and up against all manner of BMW, Lexus and Mercedes models. 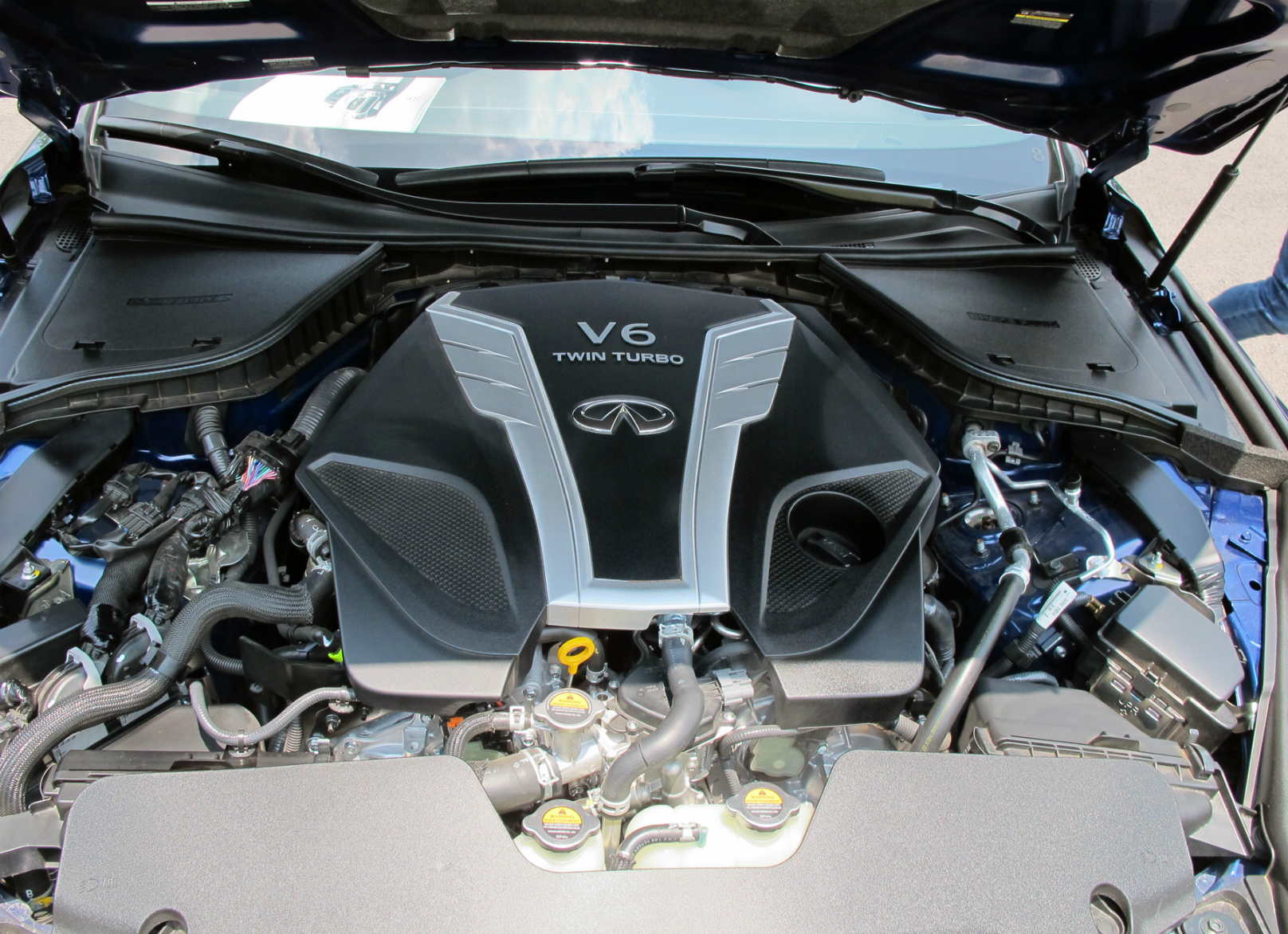 Lastly is the Q50 Red Sport 400 introduced two years ago. It takes some high-performance competitors such as the Cadillac CTS-V, Mercedes AMG and a myriad of BMW M sedans.

The Red Sport 400 pumps the power of the 3.0-litre up to 400 hp and 350 lb/ft of torque with advanced suspension and handling to match.

Subtle changes for 2018 are different marketing strategies with the 2.0T and 3.0T called Luxe models. They join the 3.0T and Hybrid as the “core” offerings with the Red Sport 400 in its separate “Enthusiast” category.

Making these cars fun to drive is Infiniti’s Direct Adaptive Steering (DAS) that uses a toggle switch to select from six different modes — Personal, Standard, Snow, Eco, Sport and Sport+. The mode selected is shown on the centre stack screen.

At the top of the ladder are the Q50 3.0t Sport and Red Sport 400, which feature Infiniti’s Dynamic Digital Suspension.

With the flick of a switch, the driver can activate the electronically adjustable shocks in either Sport or Sport+ modes. When either is on, the system constantly changes to keep the Q50 “flat” in terms of suspension dive and body roll.

Exterior styling remains relatively the same. The only giveaways you are driving a Red Sport are trim specific 19-inch wheels, discreet badging and different tips for the special exhaust system. 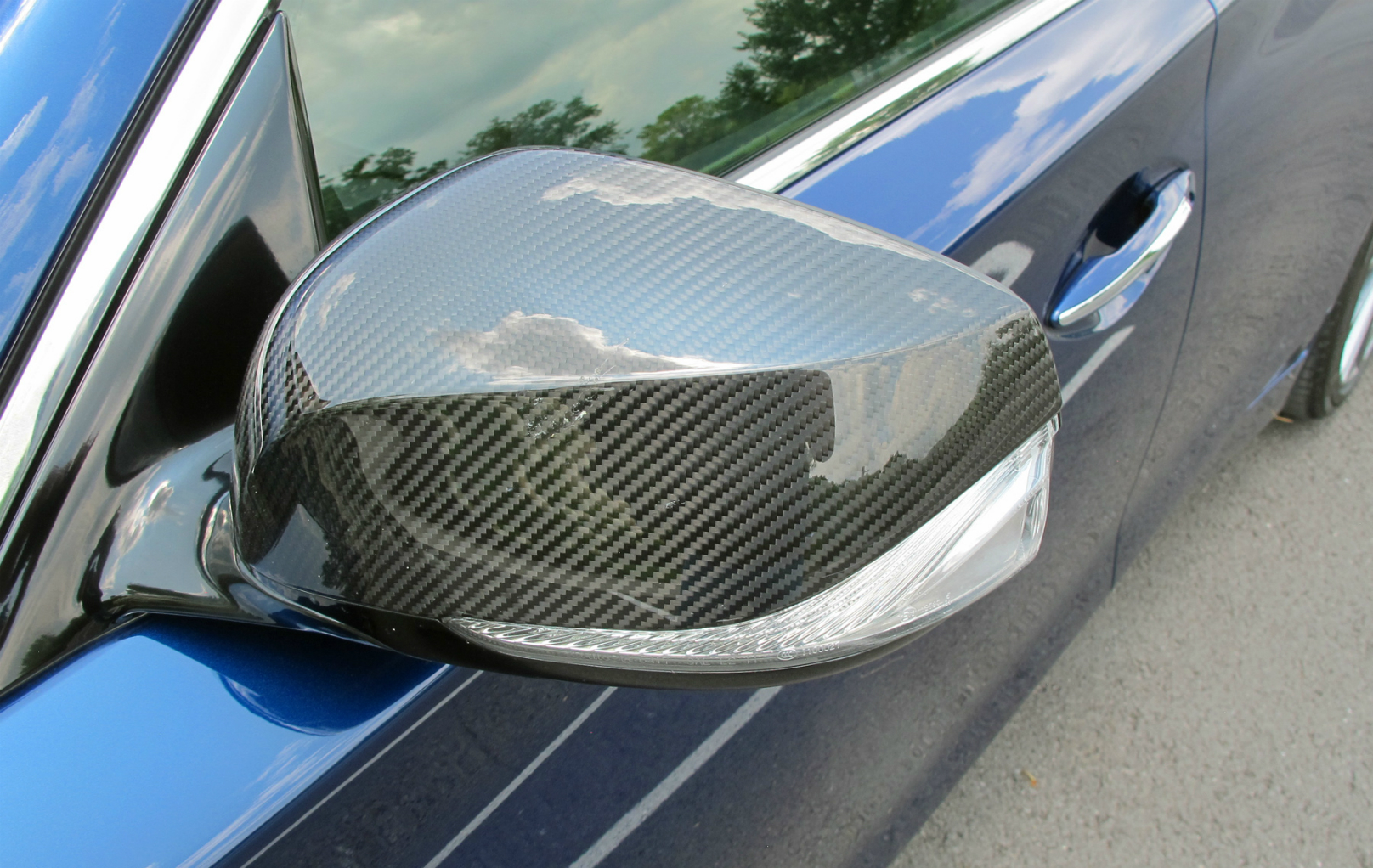 The PFCW is very interesting in that the Q50 can actually “see” two vehicles ahead. So if someone stops or slows suddenly in front of the car ahead of you, the Q50 slows or stops accordingly.

Sampling the 2018 version of the Q50 took place in Nissan/Infiniti’s hometown of Nashville, TN, and we only had U.S.-spec Red Sports with rear-drive only, so driving impressions must be confined to that. 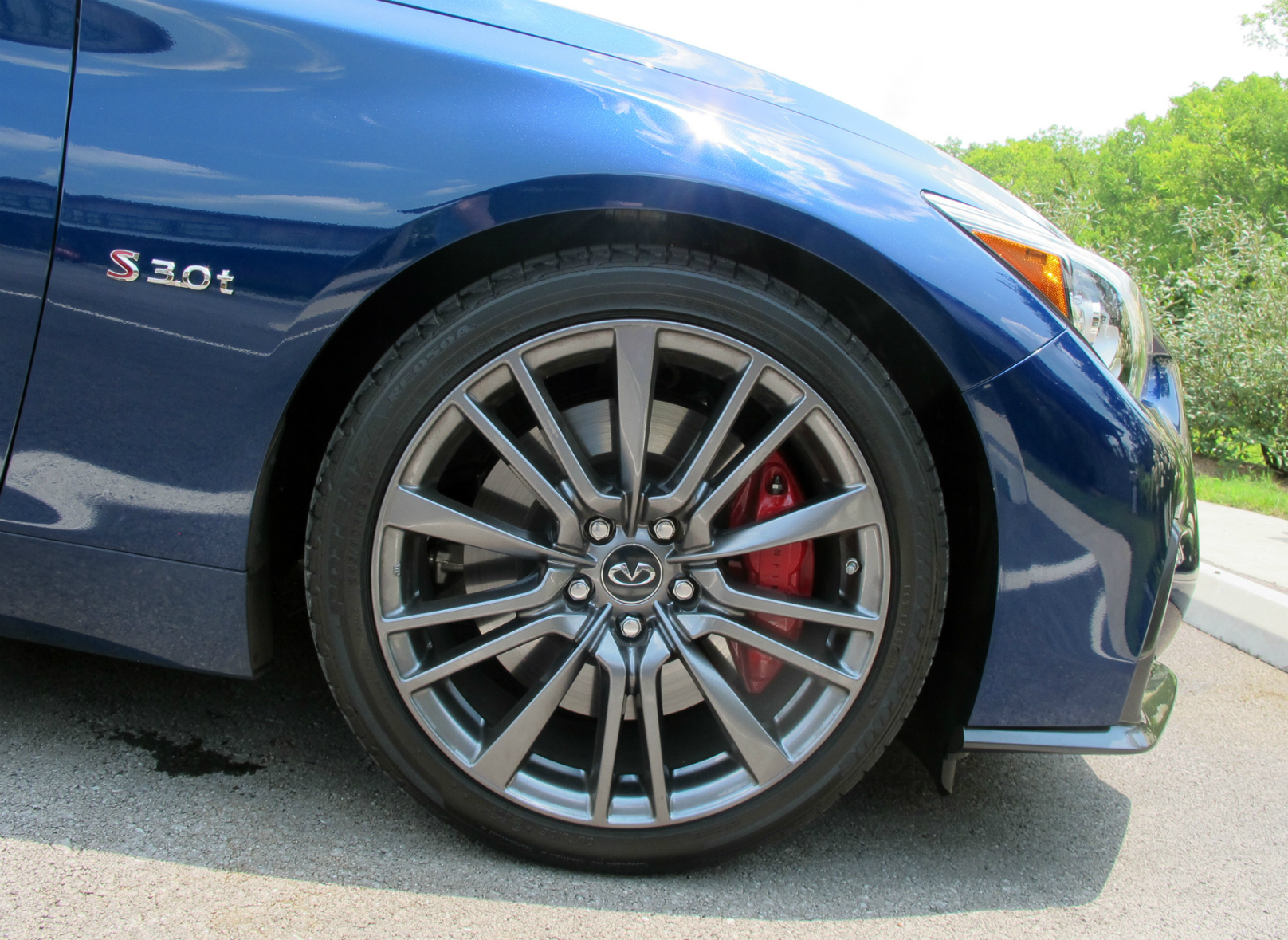 Prior to heading out, Infiniti rolled out a chart of power comparisons with its main competitors — showing the Q50 arguably leads the segment in horses and torque.

It certainly felt like it out on a wonderful drive route Infiniti chose through the rolling hills with large homes on huge lots most with white picket fences and lawns looking like they were trimmed with barber’s scissors. 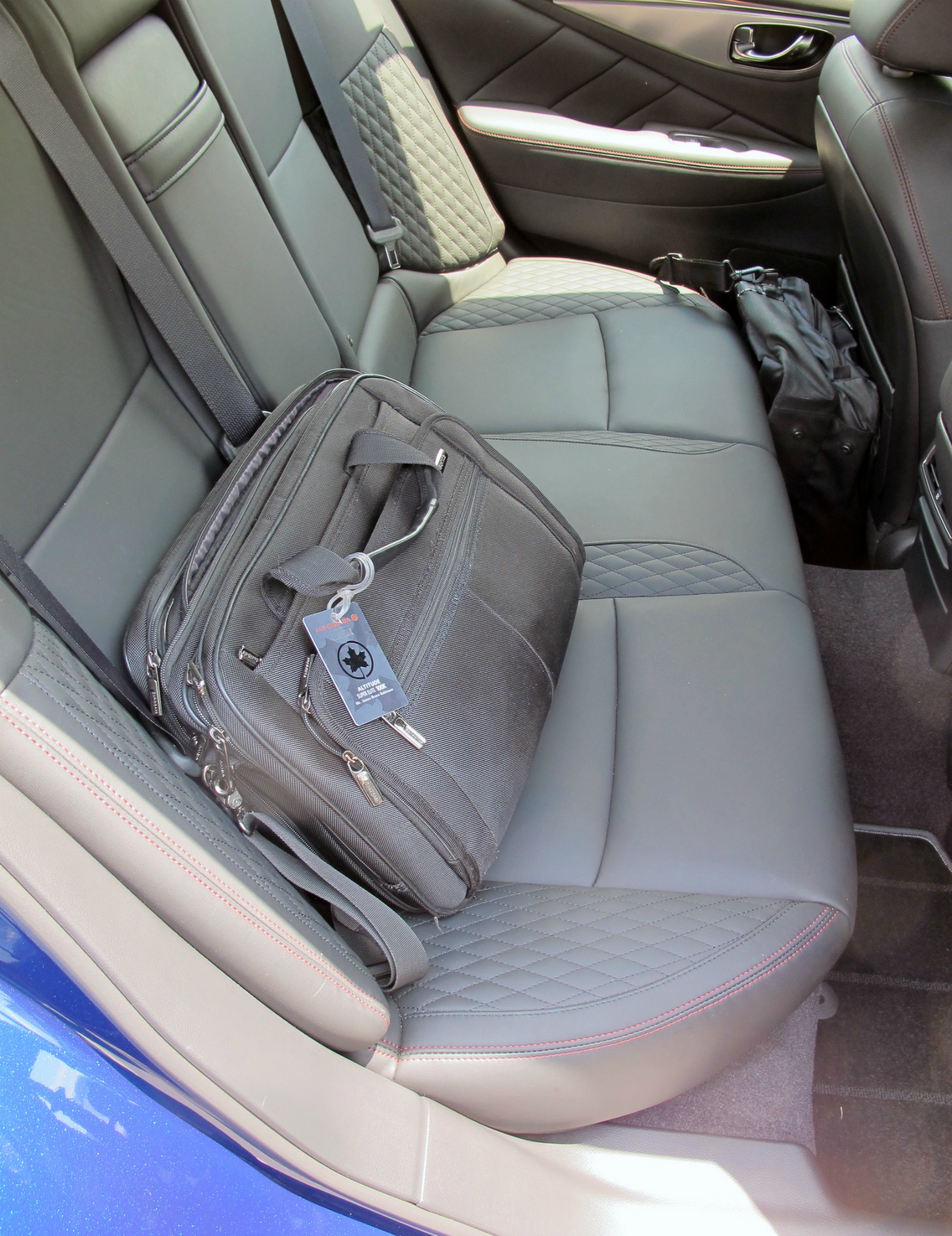 Infiniti has long been working to have itself seen on the same plateau as the leaders in luxury sedans.

The 2018 Q50 is one of the reasons for that success — as Infiniti overall sales demonstrate.

In the intermediate luxury arena, the Infiniti Q50 is definitely not to be overlooked. 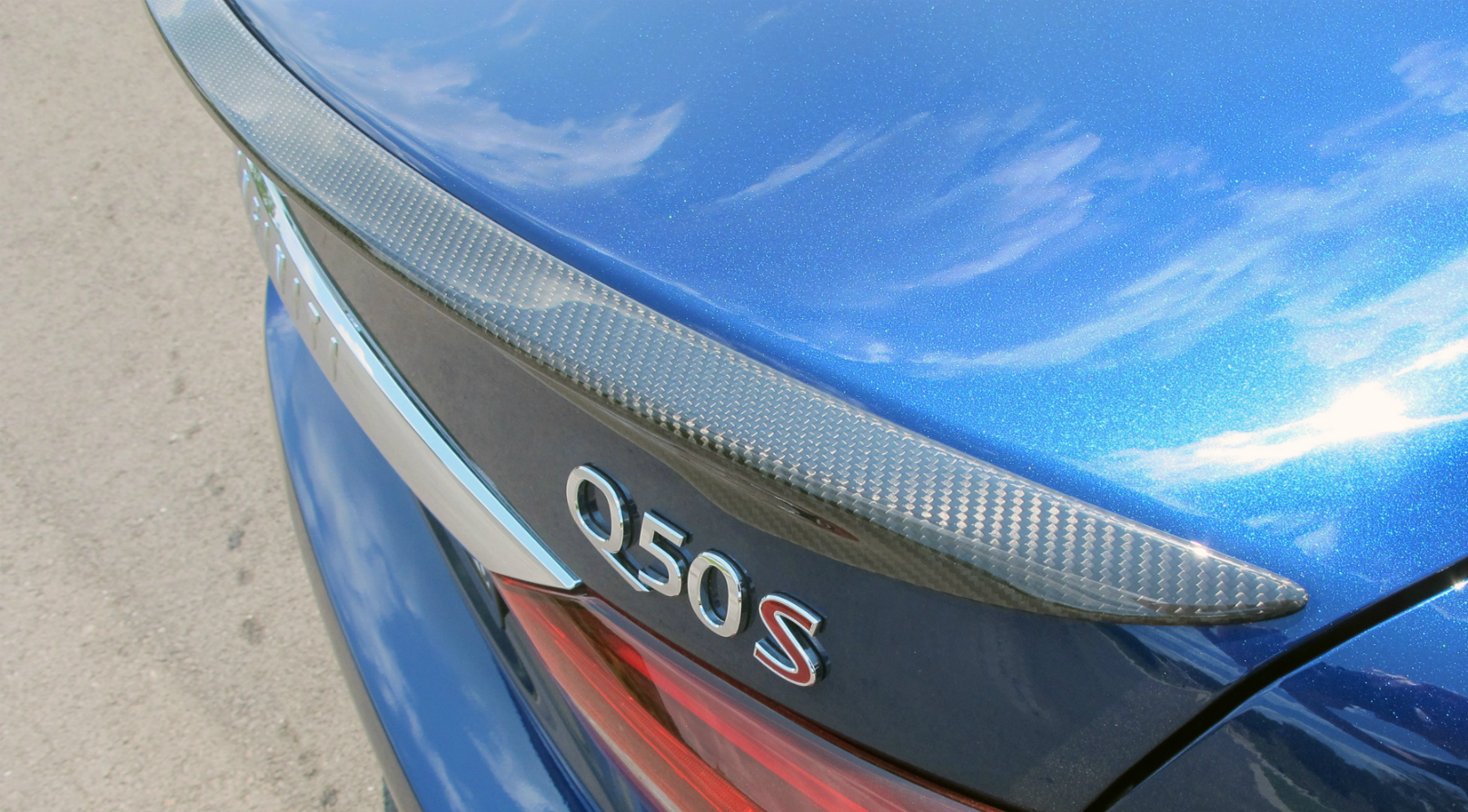