Icons of Speed - Picking up the Blu Corsa Ferrari 488 Spider

I have long admired the SR-71 Blackbird, the world’s fastest reconnaissance aircraft, and when I discovered the aptly named Blackbird airpark in Palmdale California, I knew I had to visit this icon of speed and do a photoshoot with the Ferrari 488.

I have spent most of the last three weeks answering a very simple question; Where have you been? To which I replied trying frightfully hard not to look so awfully pleased with myself, “Oh, I was test driving a Ferrari 488 spider in Los Angeles!”

As you might imagine I am still grinning from ear to ear from the experience. Planning for my second Los Angeles Ferrari experience began several months ago. The key objective was to escape the mind-numbing traffic jams of L.A. and head sixty-three miles north to the aviation mecca of the Antelope valley, home to The Blackbird Airpark, Air Force Plant 42, and the US Air Force test pilots base at Edwards Air Force base. In addition to being a supercar enthusiast, I am also an aviation enthusiast, particularly military aviation. So, I will jump upon any chance I get to combine these passions.

I have long admired the SR-71 Blackbird, the world’s fastest reconnaissance aircraft, and when I discovered the aptly named Blackbird airpark in Palmdale California, I knew I had to visit this icon of speed and do a photoshoot with the Ferrari 488. As my planning evolved it included my wife Kelly coming with me. She had never been to L.A. and as she is an actress she wanted to see some of the famous L.A. sights, primarily Hollywood Blvd.

I spent months dreaming about parking my Ferrari 488 test car between the two Blackbirds at the airpark.

Three days before I headed down to L.A. I got an email telling me that the Rosso Corsa (red) 488 GTB coupe I was supposed to be testing had been replaced by a Blu(e) Corsa 488 spider. Now I felt a mixture of emotions; why do I always receive a blue or black Ferrari to test drive? I was so looking forward to finally getting a Rosso Corsa Ferrari (Yes, I can hear the chorus of violins playing as readers feel my pain).

I had planned to put my GoPro camera inside the glass covered engine bay of the 488 GTB to get some engine noise and see the engine moving about under acceleration. The Spider version of the 488 does away with the glass cover to make room for the folding hardtop roof. I then looked at some images of the 488 spider in Blu Corsa and my disappointment turned to joy.

It had rained in L.A. the week prior to our visit, which is unusual. As it happened it also rained on the day of our arrival, and seeing a man running with an umbrella was a rather odd spectacle. The downside of the rain was that the fun canyon roads of the Angeles Crest highway and Angeles Forrest highway, where I was planning to drive up to Palmdale, were closed due to a rockslide.

However, these thoughts were put aside for the moment as we arrived at the Ferrari service centre to pick up our test car.

We were surrounded by a plethora of Ferrari’s. One non-Ferrari treasure stood out – an Alfa 8C in candy apple red, a seductive exotic I have been waiting several years to see, and it was worth the wait.

Inside the workshop lurked not one but two red F50’s, a red LaFerrari, and a rare 250 SWB being rebuilt. These paled in comparison when I saw our Blu Corsa 488 spider test car.

Blu Corsa is my favourite new colour, the colour I would order for my 488 spider Ferrari, of course this option will set you back $12,486. I was gob-smacked by this vision, even three weeks later I am in awe looking at my pictures of the car. I have never been so affected by the styling and colour of a car before.

After dealing with the necessary Ferrari paperwork Kelly and I headed out onto the streets of L.A., where for the first and last time I had to use the windshield wipers on the 488 thanks to a 10-minute down pour.

The cockpit of the 488 was very familiar to me thanks to my drives in the 458, the F12 and the FF. I am finally comfortable using the steering wheel mounted indicators. Sadly, the same cannot be said for the air conditioning which remains a mystery of operation even to my wife who is far more technically adept than I am.

We turned to our onboard navigation to help guide us to the Hilton hotel in Glendale, where we encountered our first major problem, as it turned out our 488 was a European-spec model and the navigation system was calibrated for Europe not America. We discovered this problem after going through the menu where we saw Armenia but no America, and Ukraine and the United Kingdom, but no USA.

So how do you navigate around L.A. without onboard navigation? 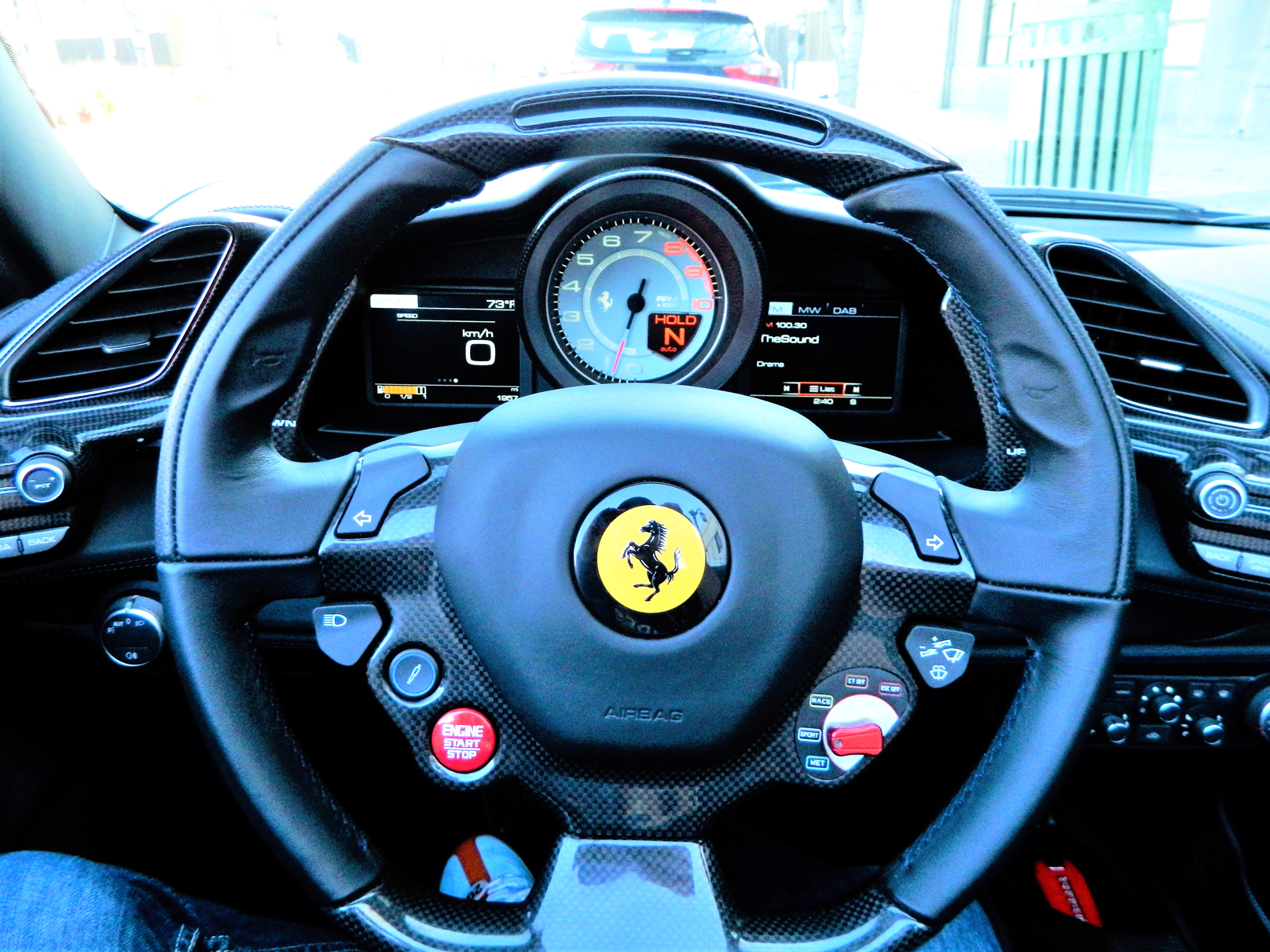 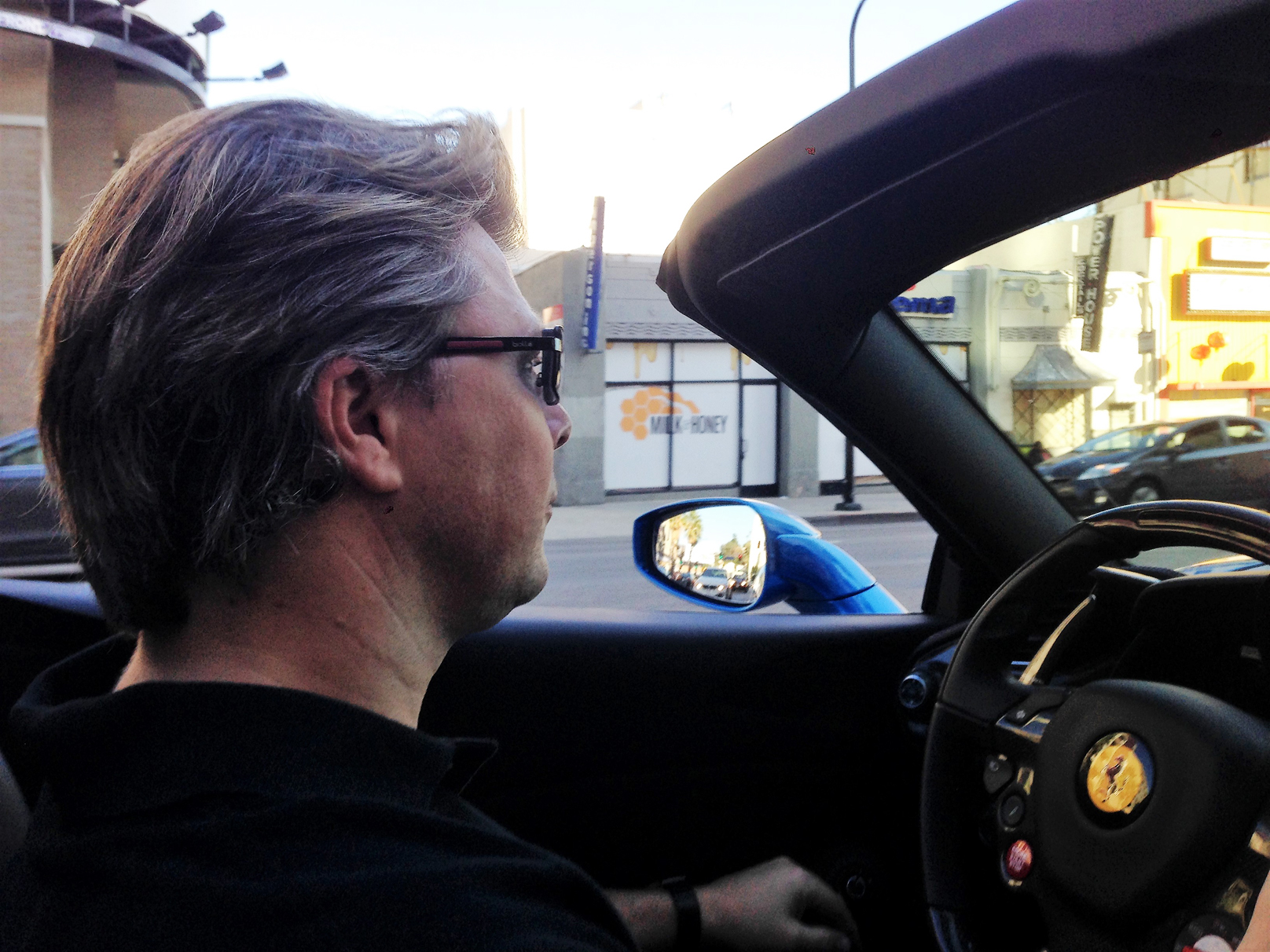 Thankfully our trusty iPhone and Google maps came to the rescue. Time lags and occasionally dropping out of connection, caused a bit frustration for us. I was often enthusiastic with my right foot while Kelly was trying to read sign posts and then choosing which one of the six lanes we needed to be in at the right moment. I am extremely grateful Kelly was with me or else I might still be trying to find my way around LA.

As with the California T I drove last year, the transformation from coupe to convertible is accomplished within 20 seconds. The spider with its hardtop folding roof gives you the best of all worlds. We got lots of thumbs up from fellow motorists.

This was my second experience with a twin turbo Ferrari V8, the first was with the California T last year, and while some have complained about the loss of the naturally aspirated V8, I am not one of them. Yes, the roar of the 3.9L engine is not as deep and beguiling as the old 3.8L, but it still sounded like a Ferrari engine and the performance, brief though it was in the dash between traffic lights was extremely rapid and only made me want to use more of the 660 horsepower on tap.

L.A. driving does showcase how versatile modern Ferrari’s are; the 488 easily coped with all manner of L.A. obstacles. The Ferrari has one button that is essential for L.A. traffic, namely a bumpy road setting which helps to smooth out the jarring highway tarmac. This was also my first Ferrari with the new key fob, (though I confess to being a fan of the old key) none the less one must move with the times and a Ferrari key is always a treat to have in one’s possession regardless of the shape. 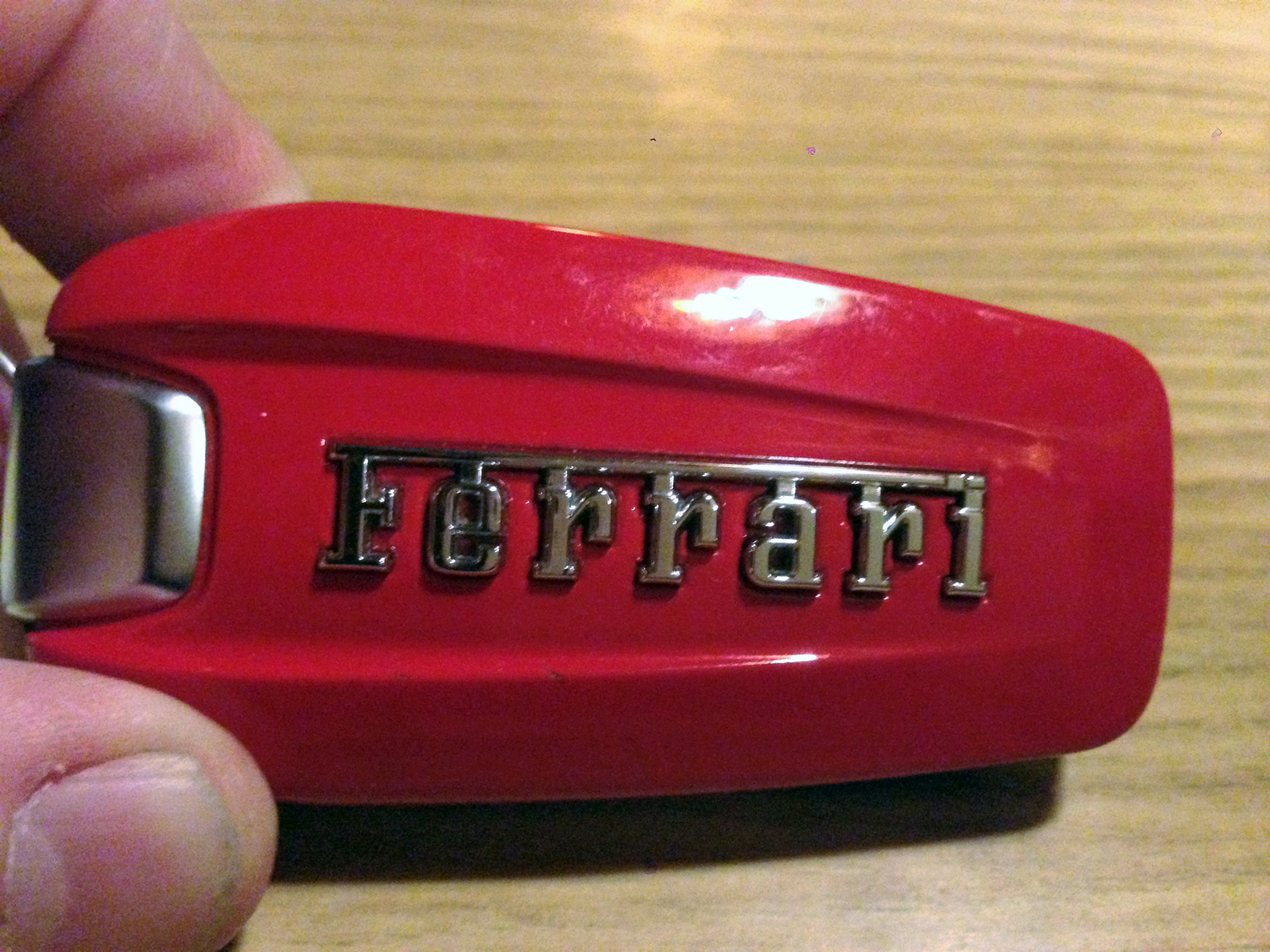 Our next stop on the La Ferrari adventure ride was the California Science Centre which houses the space Shuttle Endeavour. It’s not often a parking lot deserves any special mention, but one with an A12 spy plane mounted on a plinth certainly does. The A12 was the predecessor to the famed SR-71 Blackbird, so naturally I had to position the Ferrari to enjoy an impromptu photoshoot. It was full of irony that I borrowed a parking space for EV’s to park a supercar in front of a spy plane that could fly 3 times the speed of sound.

Symbols of the past the present and the future. 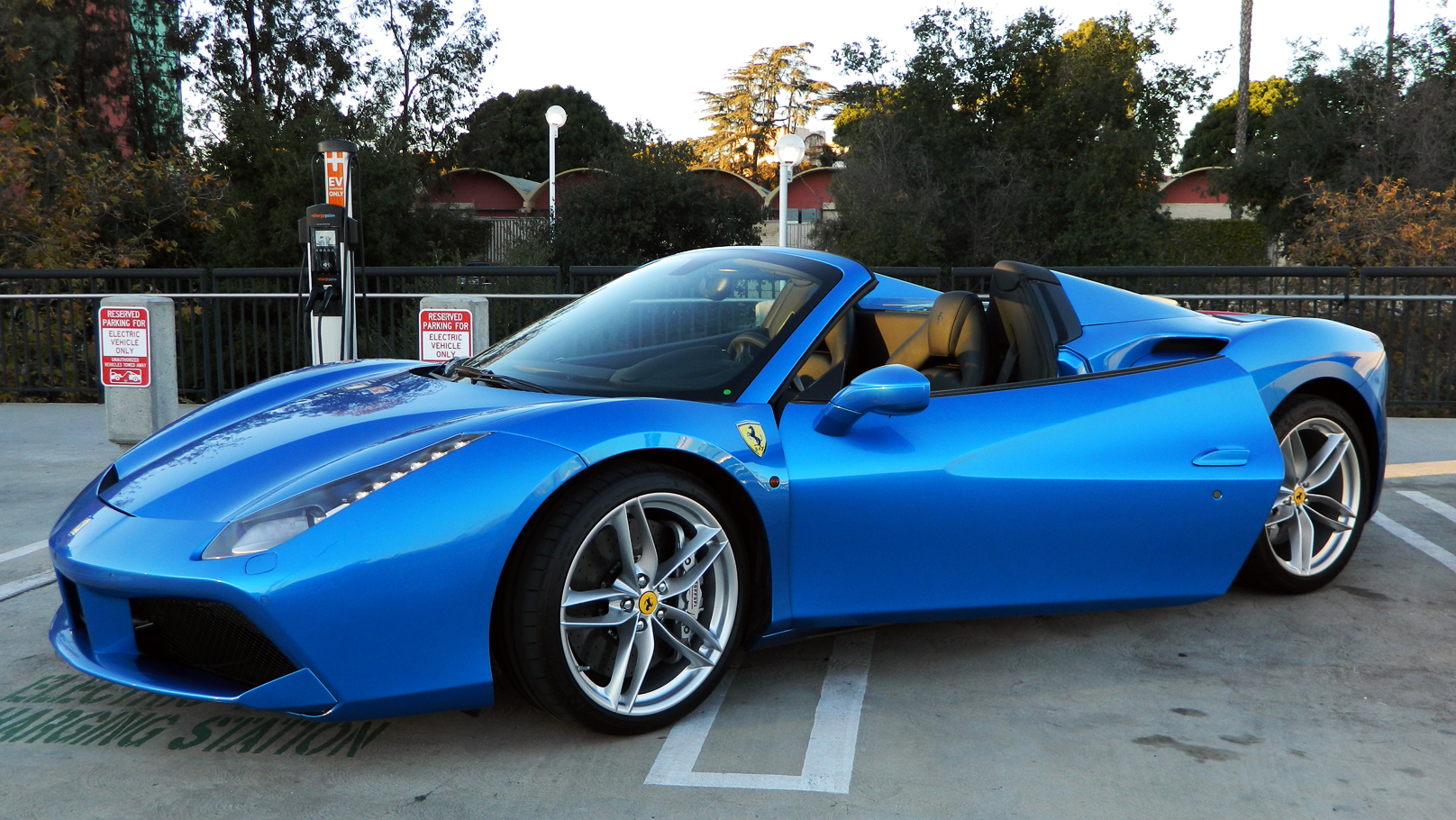 It is somewhat bizarre to think of the space shuttle Endeavour in the past tense, none the less it is an impressive monument to space exploration. I became a little kid wandering around the shuttle display, mouth agape, wonder etched on my face. Looking at the carbon scoring and space grime gave the Endeavour a tangible patina that is permanently etched in my memory. 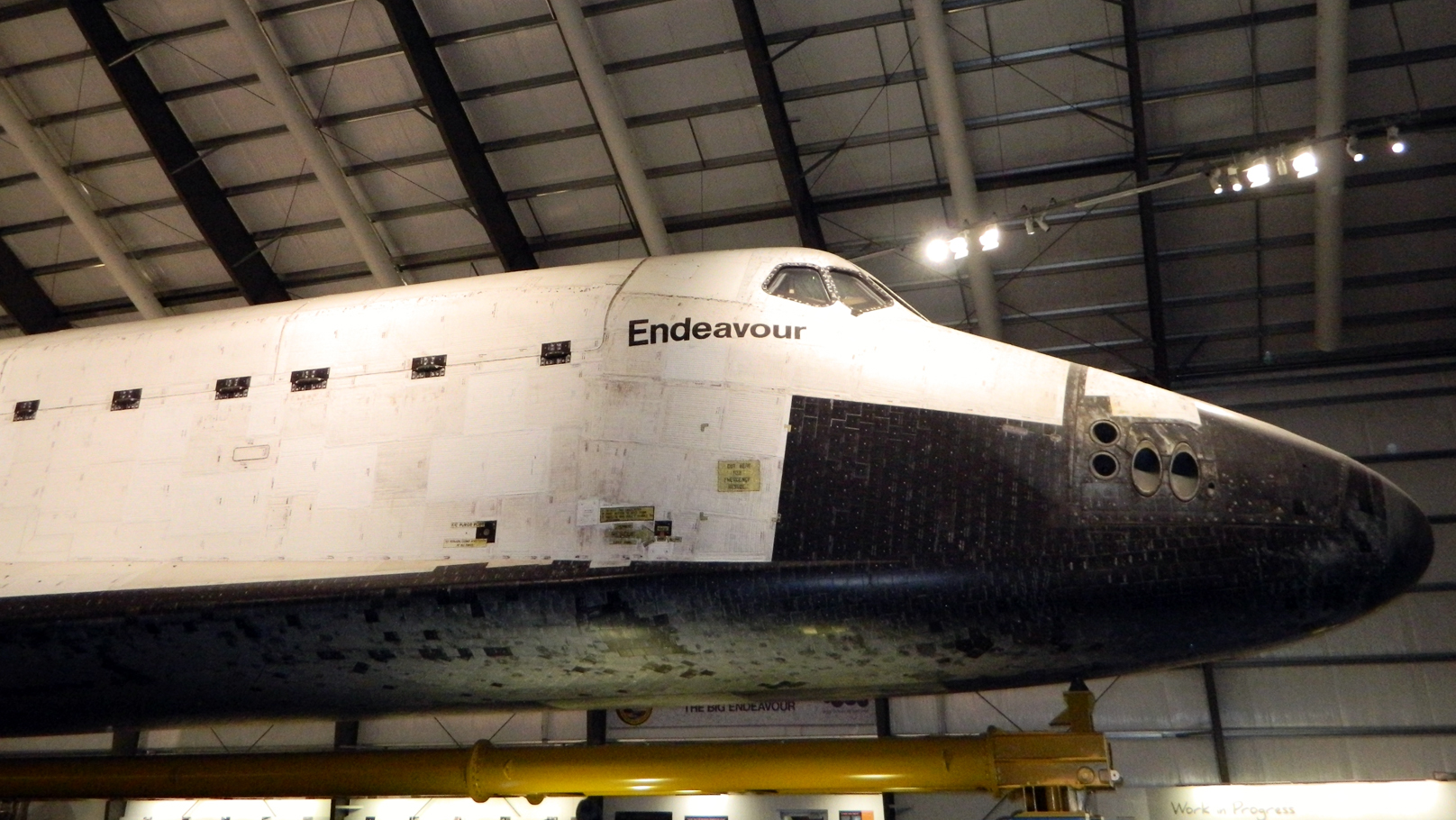 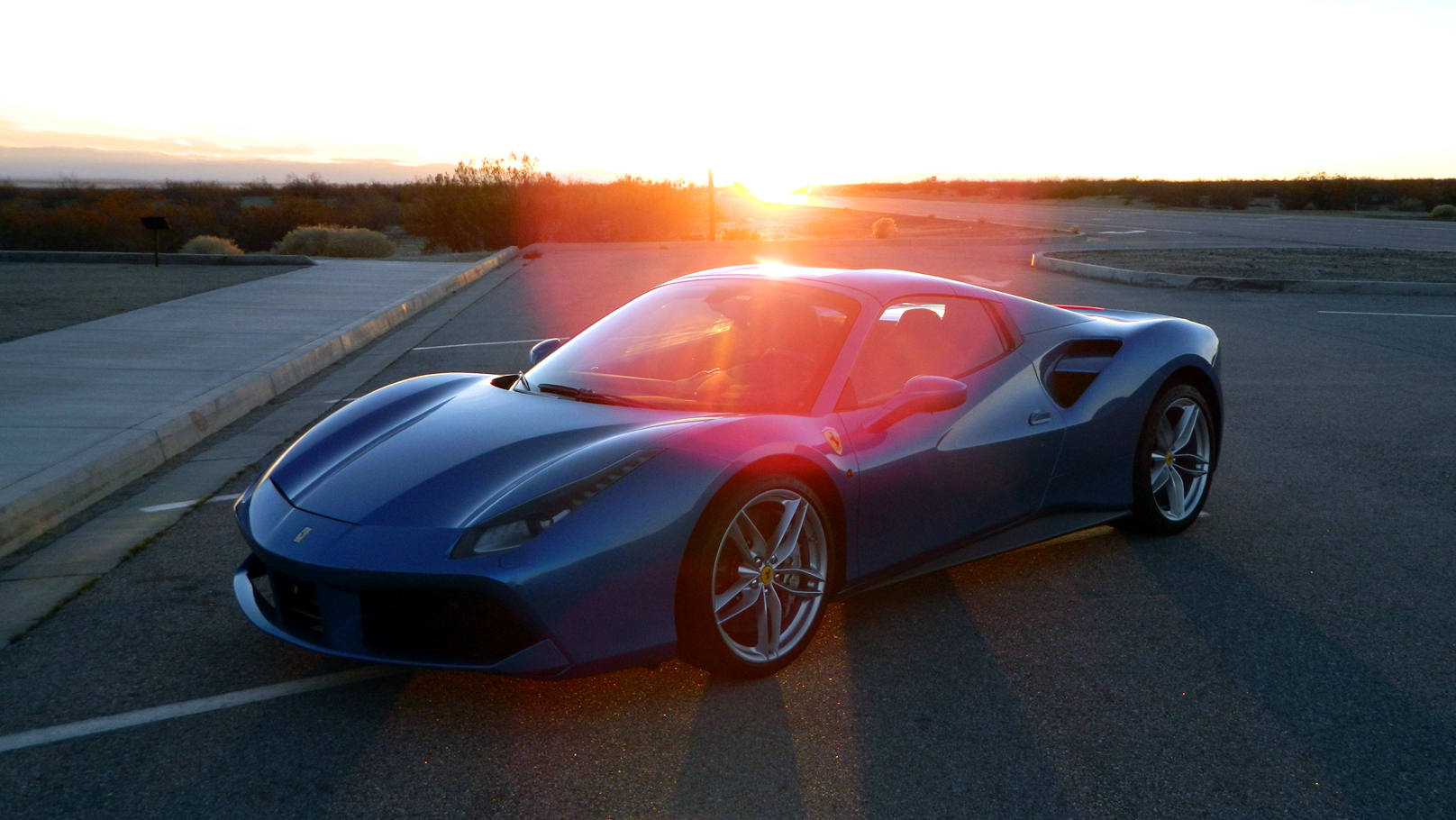 We then made our way to the famed Hollywood Blvd, home of the Hollywood walk of fame. We parked the Ferrari in the largest underground carpark I have ever seen, then joined the rest of the tourist mass on Hollywood Blvd, where we began dodging street-performing superheroes, enthusiastic vendors and local preachers.

The energy of the street is infectious as you observe this melting pot of Americana. It was amusing to see a travelling “Jesus Saves” group parading up and down Hollywood Blvd, in front of the Hooters restaurant. After a few hours of walking along the cacophony of the street had worn us out. We bought our obligatory L.A. baseball caps and we were ready and eager to get back into the Ferrari for the second half of this adventure.

Lamborghini – The Man, the Myth, the Legend