Driving the Ferrari 488 Spider out of the parking lot and up on to the aircraft display area housing the Blackbirds was utterly surreal.

After 2 days of driving round seeing the sights, I was eager to get out of L.A. and finally do some open road driving.

The Angeles Crest highway was still closed so I was forced to take highway 405, thankfully early Sunday morning saw minimal traffic so for the first time in the trip I was able to put my right foot down and taste a little bit of the performance of the 488 Spider. Turbo lag is a thing of the past. I put my foot down and even in auto mode the 488 took off like a scalded cat. The Ferrari double clutch gearbox is near perfect. The power delivery is equally smooth, one moment you are doing 60miles an hour next minute you are at 120mph.

A novel (and costly option of $4,129) is the passenger display which shows them your speed, the revs, and a few other parameters. Kelly enjoyed this display until our last day when I found a road on our way back from Palmdale, then she closed her eyes as she did not want to see the speed or the revs I was using, but more of that adventure later.

I loved watching the landscape change from urban to desert. I could even see snow on the distant mountains. The desert landscape has a simple beauty of its own; and sixty-three miles and 45 minutes later we entered the city of Palmdale. As we drove down East Avenue my excitement began to mount as I anticipated seeing the Blackbird Airpark. Geographically the Joe Davies heritage airpark comes before the Blackbird airpark, and the first aircraft that comes into view is the Nasa 747 that was used to transport the shuttle. 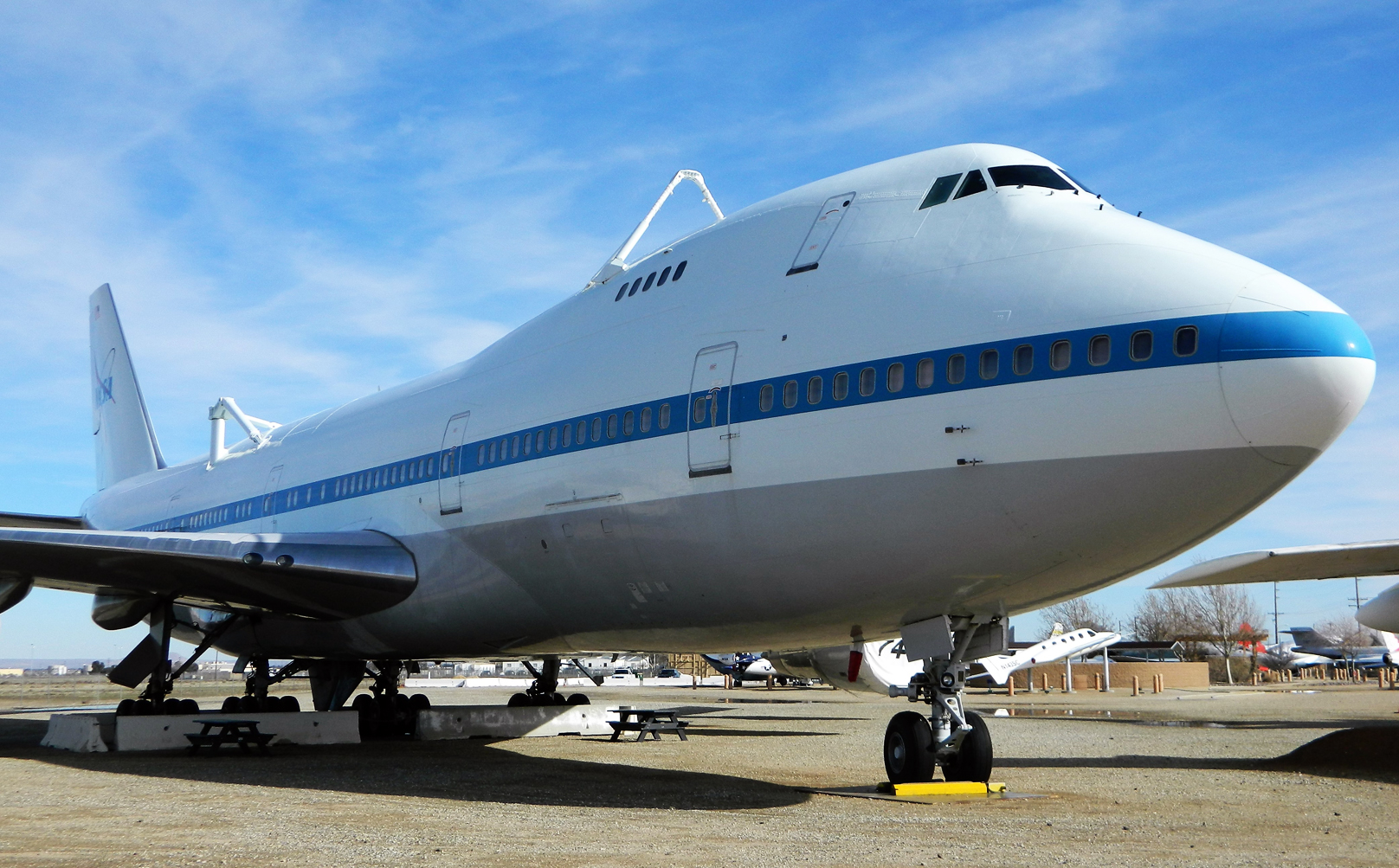 I was so excited I slowed the Ferrari down to a crawl and Kelly had to take over the steering as I was no longer concentrating on the road. And then, there they were – two blackbirds, an SR-71 and an A12 just like I had seen countless times on my computer screen only now they were physically right in front of me. Lost in the bliss of viewing the Blackbirds we were met by Kim a volunteer who manages the website and the social media for the Air Force Flight test museums.

I cannot adequately describe my feelings seeing this long imagined photoshoot come to fruition. Driving the 488 out of the parking lot and up on to the aircraft display area housing the Blackbirds was utterly surreal. With the assistance of Kim and Chris Roe, another Airpark volunteer, I maneuvered the 488 between the Blackbirds. I’m getting goosebumps as I write these words recalling that moment. I remember standing on a ladder talking pictures, occasionally I would look up and take in that I was standing in front of the legendary SR-71 Blackbird, and I was driving a Ferrari 488 spider. The photoshoot with the Ferrari and the Blackbirds would not have been possible without the permission of George Welsh curator/director of the Air Force Flight test center. 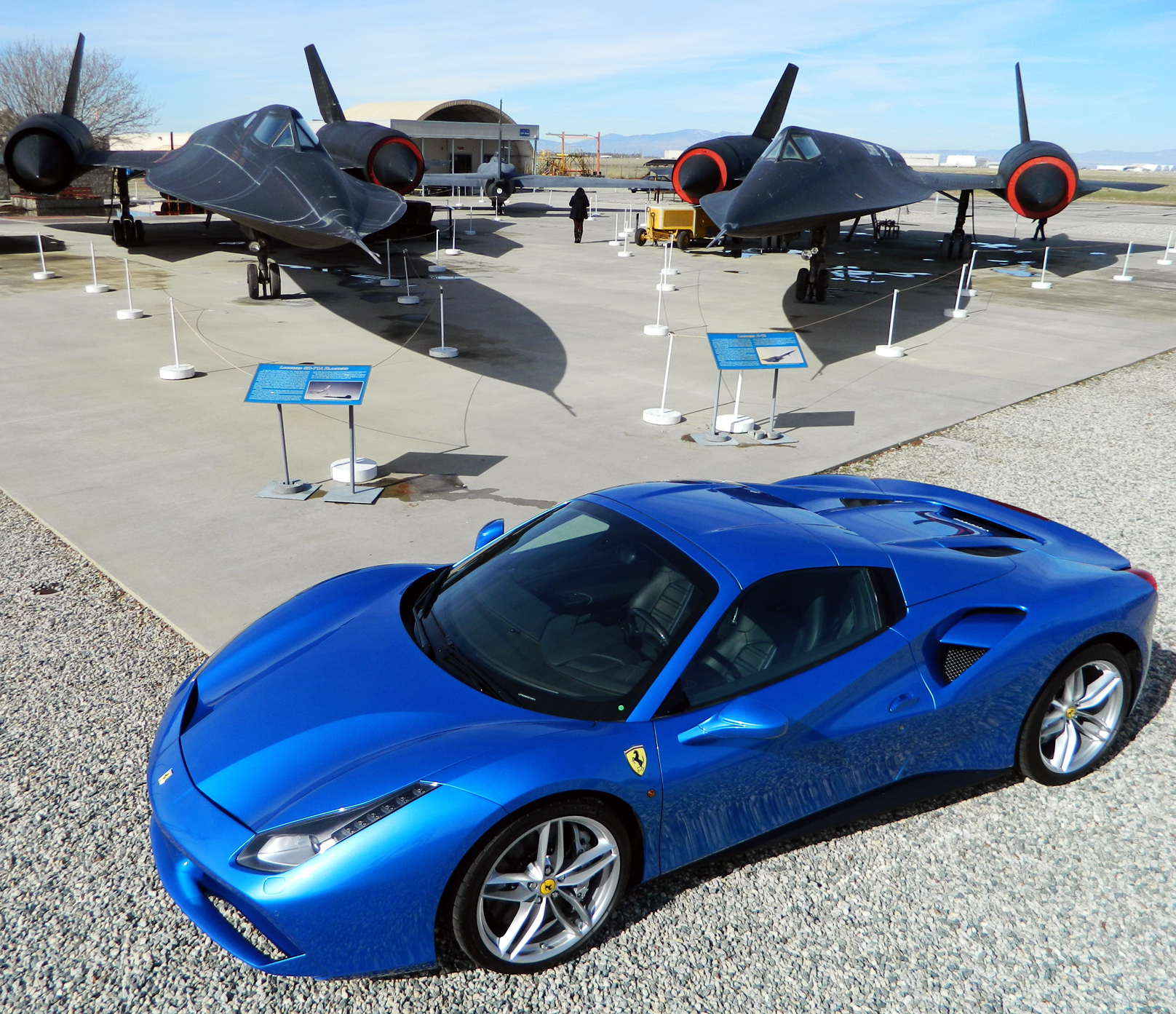 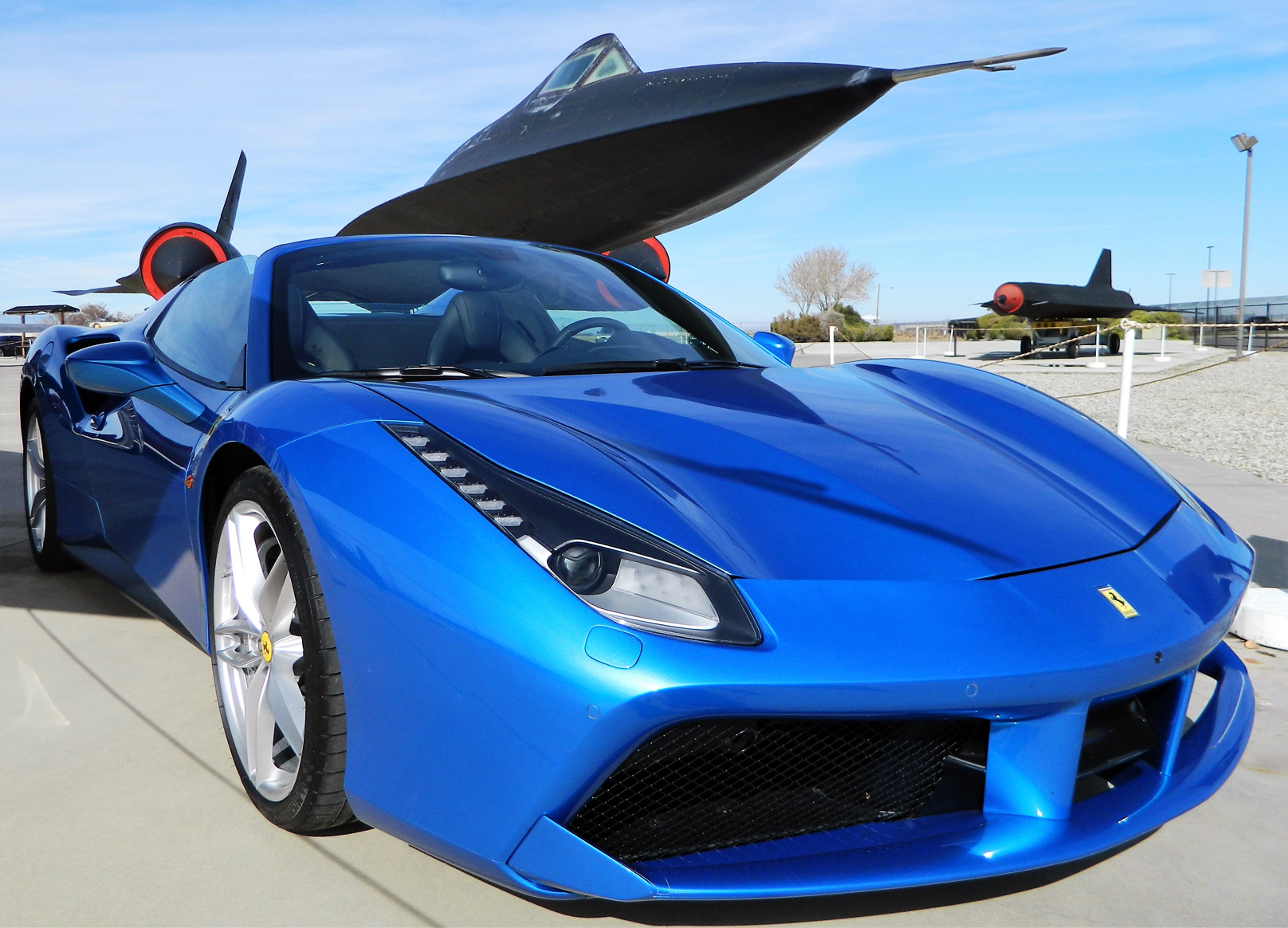 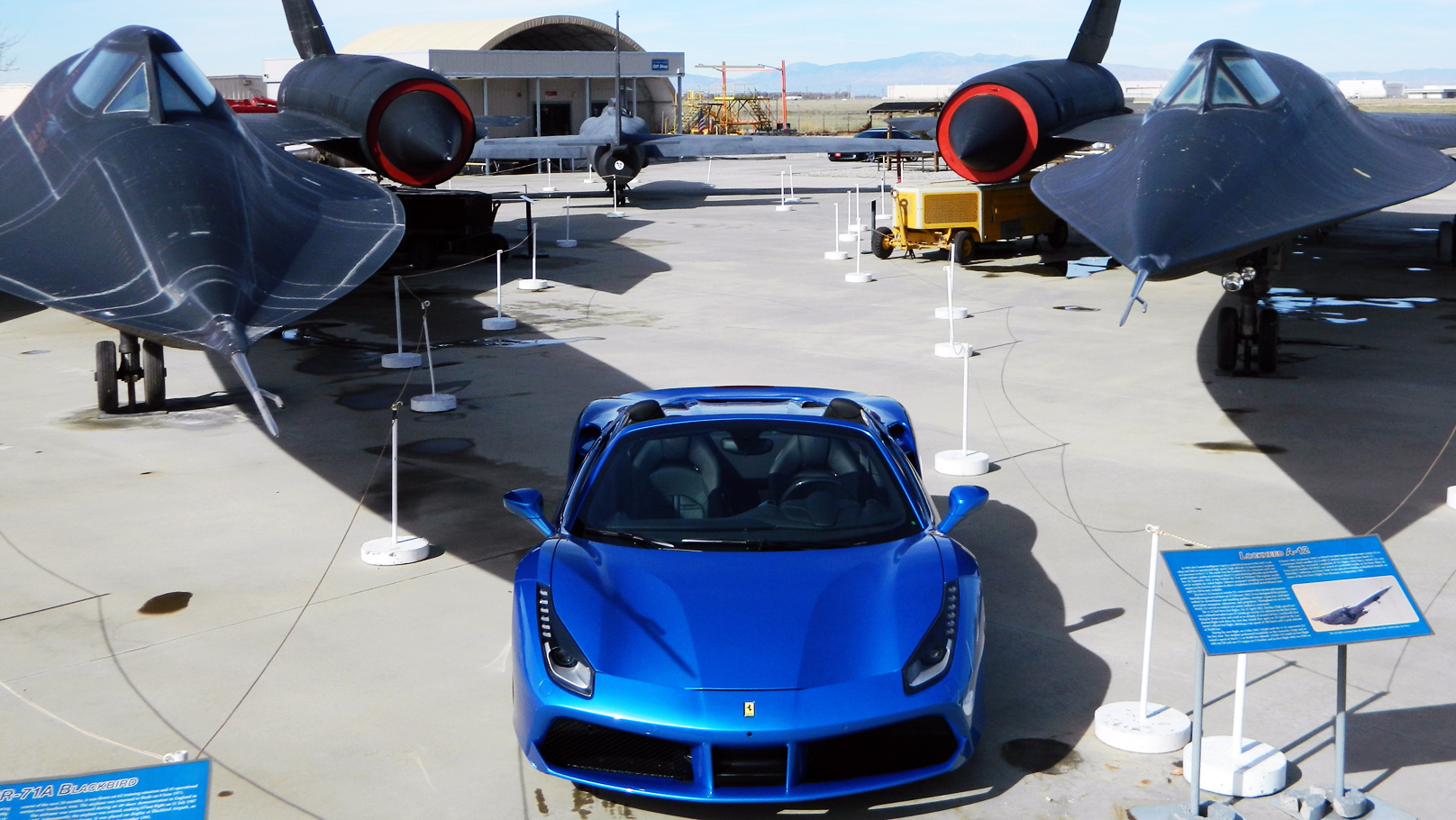 Looking back, I should have taken another thousand pictures, however the Ferrari was beginning to draw a crowd. I had the pleasure of meeting Brian and his family who came over from Australia on a skiing holiday and had popped into see the Blackbirds.

It’s no fun if you have a Ferrari and you don’t share it with others, so I took the family (one at time) for a little joy ride down 25th street East. As 25th street was dead straight I was able to give a demonstration of the rapid acceleration capabilities of the 488 spider as well the superior stopping power of the LaFerrari ceramic brakes. I venture to say that where it not for the police cruiser I saw on one of my runs, and the fact I am a law-abiding driver, I could easily have taken the 488 to 190mph down this stretch of road. The look of joy on Brian’s son, Keith’s face was ample reason to offer rides in a Ferrari supercar.

Kim and Chris had told me earlier that I had to head into the Blackbird Airpark gift shop to meet retired USAF Lt. Colonel Bill “Flaps” Flanagan who has flown the SR-71 and the B-2 and is now a docent at the Blackbird Airpark. During my research on the airpark I had watched several videos featuring Bill talking about his fascinating flying career with the SR-71. I was absolutely thrilled to meet Bill and spend several hours talking to him, about the SR-71, the ejection sequence in Top Gun, the crash of the B-2 in Guam a few years ago, and his book that is coming out in April which can be ordered on Amazon.

Amongst the numerous displays and photographs of the SR-71 there is an actual SR-71 ejection seat taken from the Blackbird Bill took his first flight in (serial 955), and the ejection seat Bill was sitting in when the Blackbird experienced a twin-engine flame out. Thank fully Bill did not have to use the ejection seat that day. Naturally I had to sit in it and have a picture taken with Bill. The visit would not have been complete without taking “Flaps” for a spin in the Ferrari. I cannot say how thrilling or not it was for Flaps to experience a ride in the 488 spider, but for me it was a privilege to give a man who knows what it’s like to fly at more than three times the speed of sound a ride in the 488 spider. I could have happily stayed talking to Flaps and giving joy rides for many days, but we had another appointment. 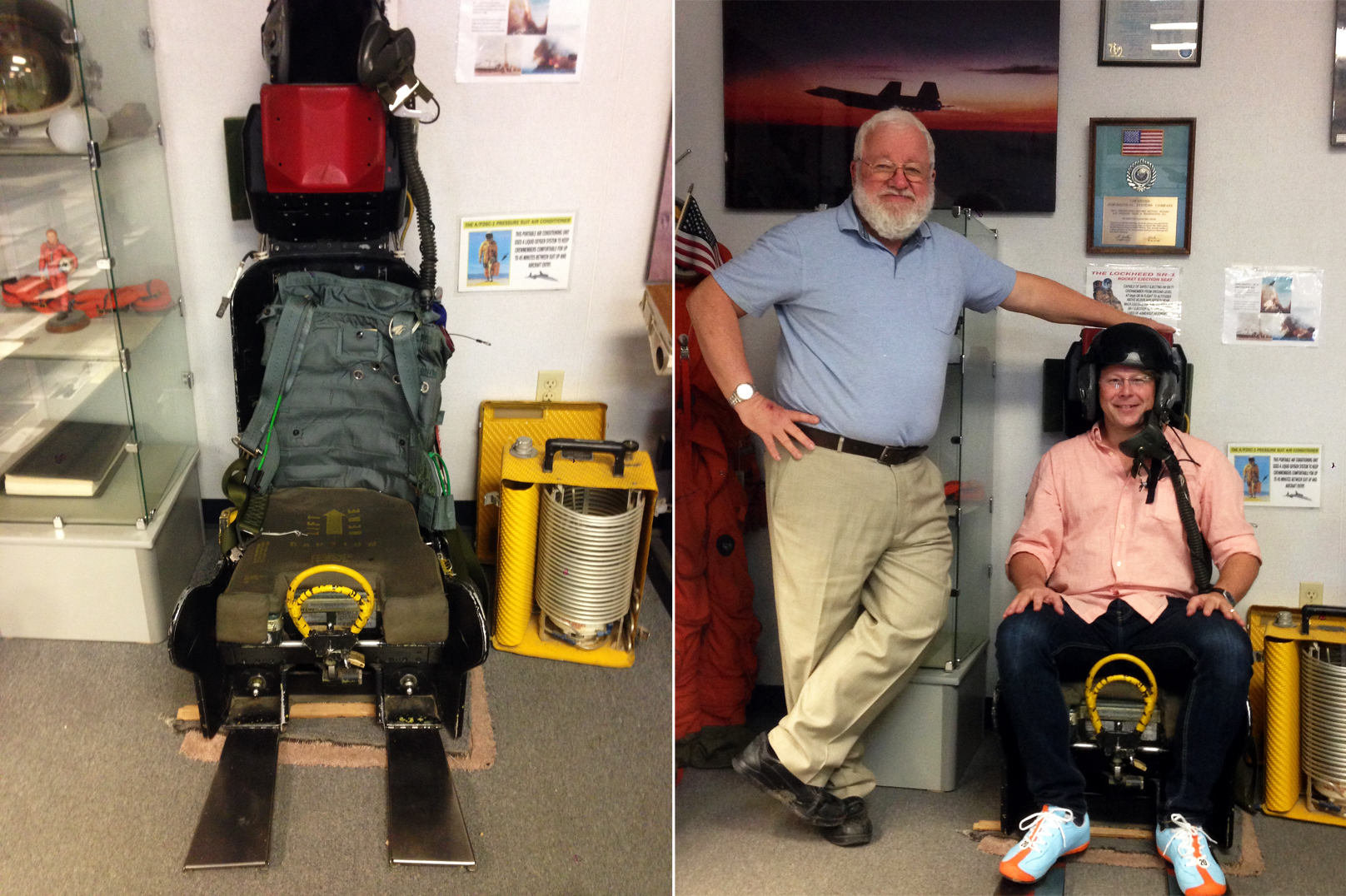 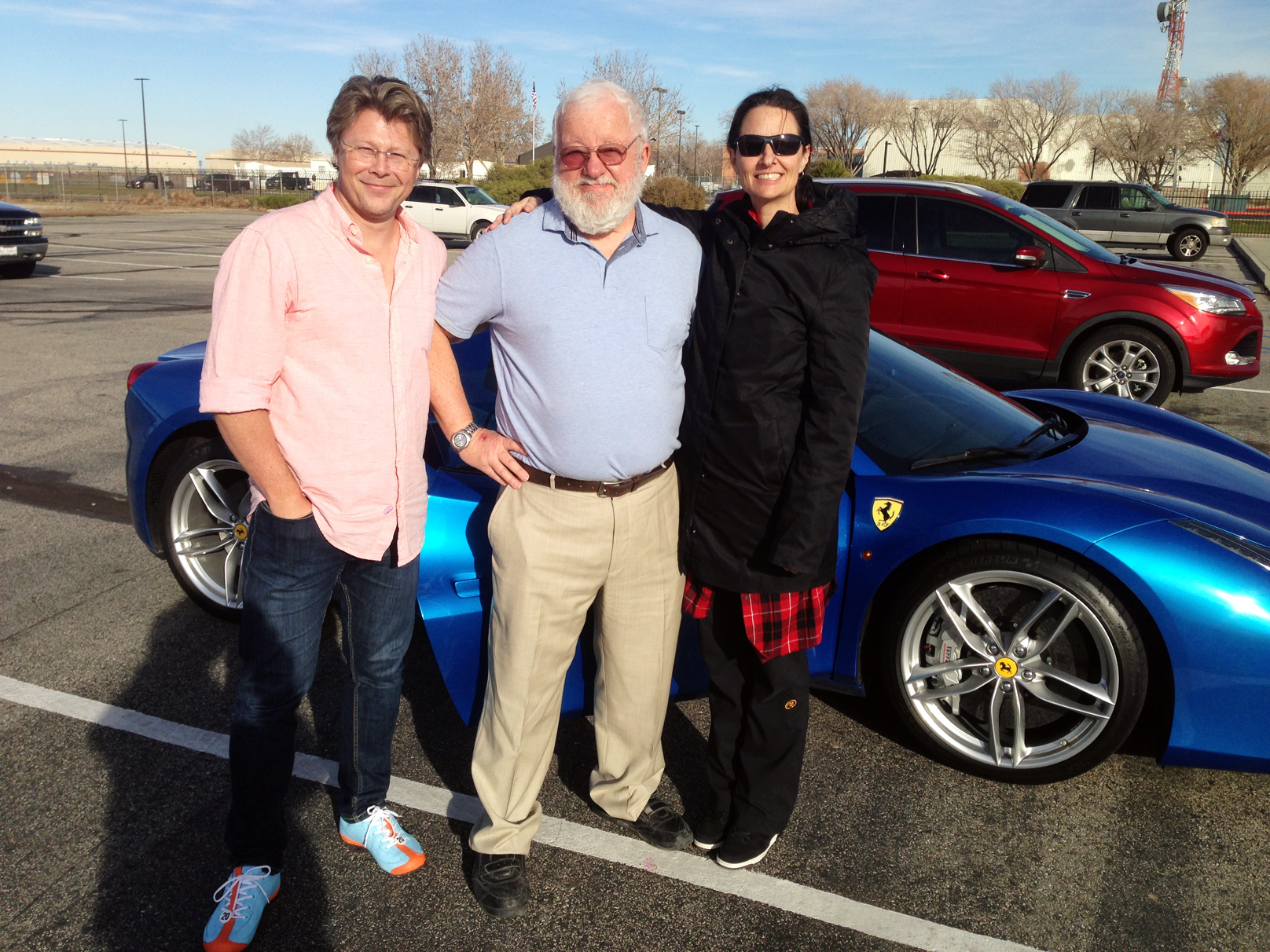 Edwards AFB is the home of test flying for United States Air Force, it was here that Chuck Yeager broke the sound barrier in the Bell X-1. I could not get onto the base, but I was able to get to the west gate which has the old Edwards control tower and 5 fighters from the century series of fighter aircraft on display.

The road out to the base is called Rosamond and it is flat and dead straight and empty of traffic. I was sorely tempted to see if I could hit the 488’s top speed of 205mph, but Kelly restrained my speed ambitions to more modest figures. The 488 applies its power so smoothly, in contrast to the violent rush of the Pagani Huayra I drove so enthusiastically a few months ago in Vancouver. We made it to the west gate just in time to enjoy a spectacular California sunset. It was a fitting end to such a wonderful day. A part of me will always be out there in the 488 spider at sunset.

All good things must come to an end so Monday morning we headed back to L.A. to return the Ferrari but not before I detoured to find a substitute road for the Angeles Crest highway called Bouquet Canyon road. This road enabled me to give the 488 a workout.

It was short and vigorous and forced my wife to close her eyes and not look at the display in front of her. The 488-steering rack is quick and accurate allowing you to point the car to where ever you want it to go. I used the manettino switch on the steering wheel to alternate between sport and race mode, but most importantly I put the gear selection in manual so I could control it myself using the carbon fiber paddles located behind the steering wheel. I honestly did not look at the speed display as I was solely focused on achieving a rhythm with the 488. My eyes were constantly watching the LED shift lights indicators on the rim of the carbon fiber steering wheel ($7,593) advising a gear change at the top of the rev range. It was all very Formula One like for 30 minutes or so before we ran out of road. 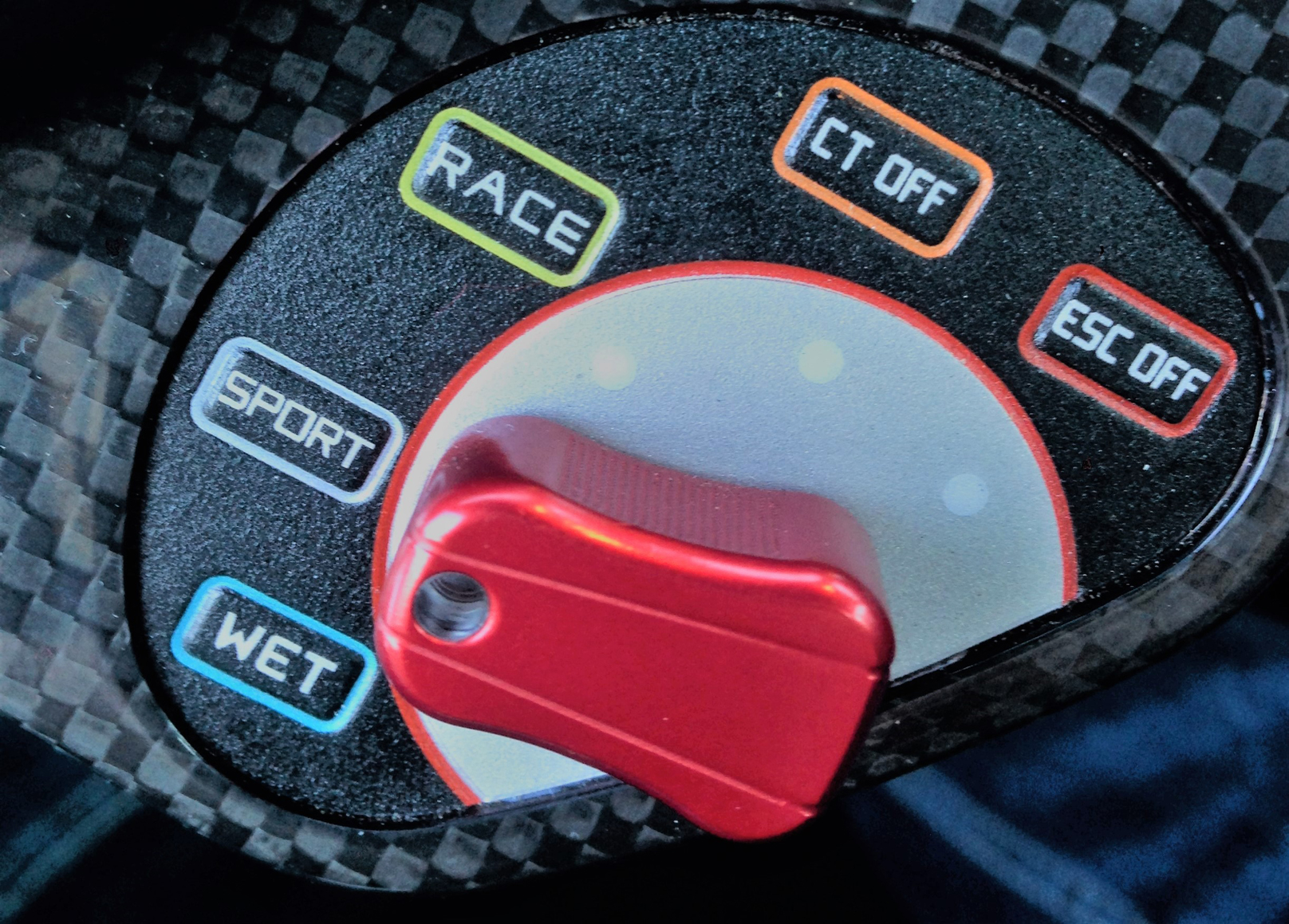 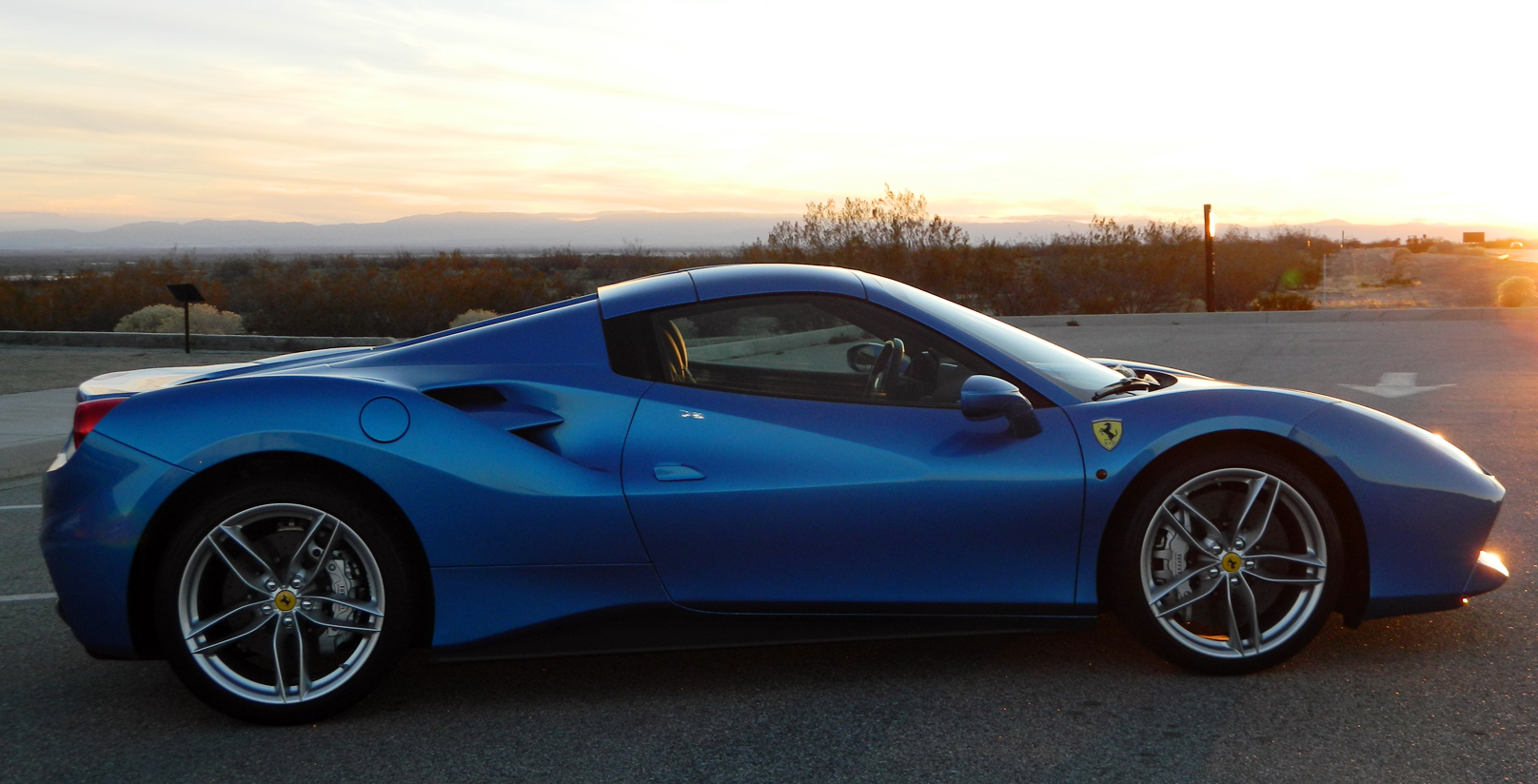 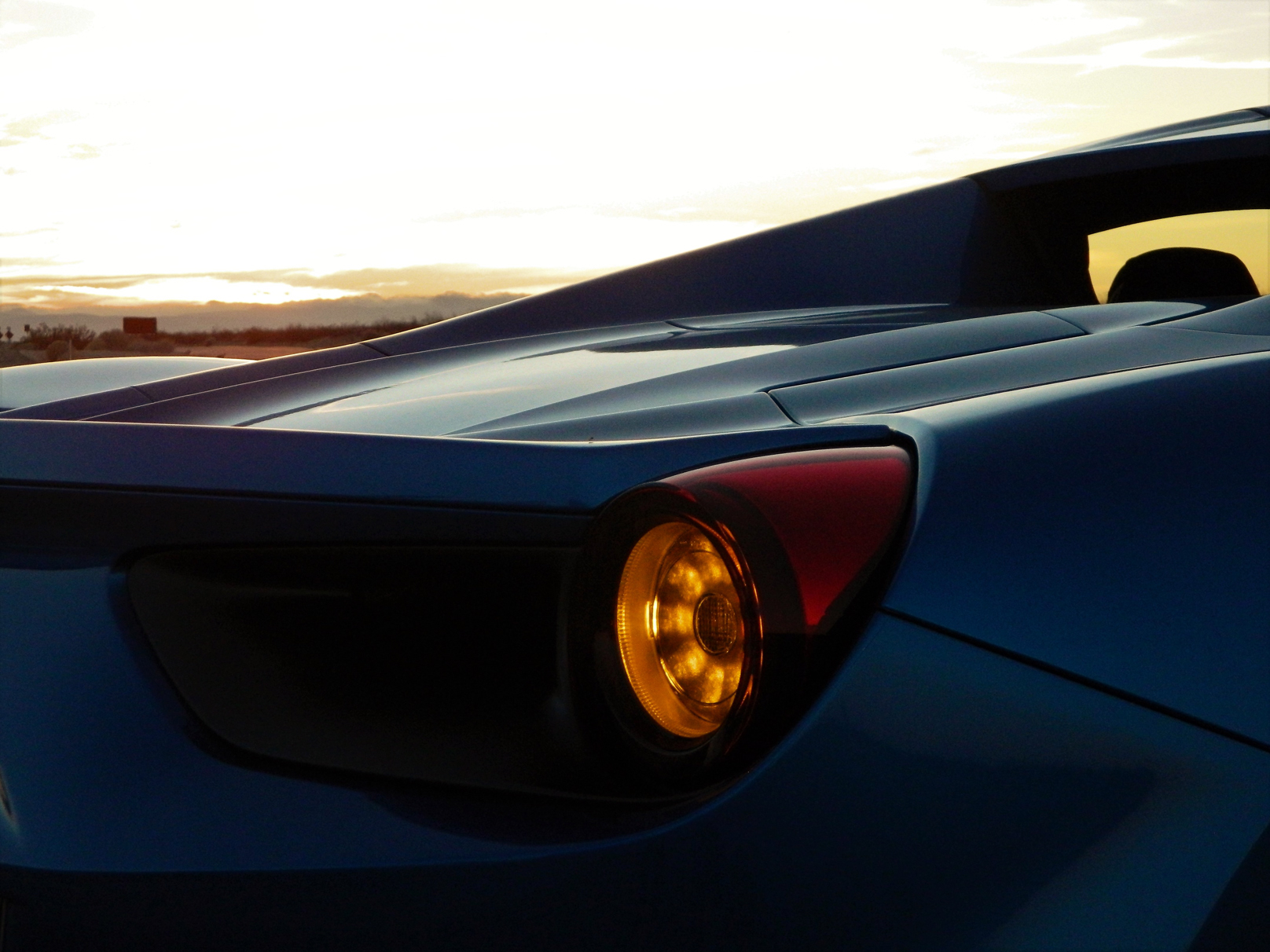 The 488 spider I tested in L.A. with options came out to $392,784. It is a civilized rocket machine. I am utterly smitten by the Blu Corsa paint which is worth the $12,486. The only change I would make to my Ferrari 488 spider, would be to swap out the $4,049 Daytona seats for the standard seats, as I developed a small backache after a few days of driving. What an adventure!

A gorgeous Ferrari, a meet with legends of aviation in metal and in the flesh. I want to thank Ferrari USA for the Ferrari and the wonderful volunteers at the Blackbird Airpark, whose passion and enthusiasm made for such a memorable visit. You don’t have to have a Ferrari for a road trip but it sure does help. Do yourself a favour and go visit the Blackbird Airpark in Palmdale , you will be glad you did.