First Drive: For the 2018 model year improvements have been made all round, such as the now signature grille treatment found on the Sonata compact.

MONTREAL, QC: That old phrase “if it ain’t broke, don’t fix it” certainly applies to the 2018 Hyundai Accent.

While it may be the perennial best selling sub-compact in Canada since 2009; it hasn’t always been that way.

Before being called Accent, Hyundai’s sub-compact was known as the Excel, which frankly didn’t excel at much, along with a companion compact sedan called the Stellar that wasn’t.

The Stellar bowed in 1983 to replace the Pony (anyone remember it?) followed by the Excel in 1985 with Hyundai quickly finding out it took more than styling by Guigiaro to make either a success. 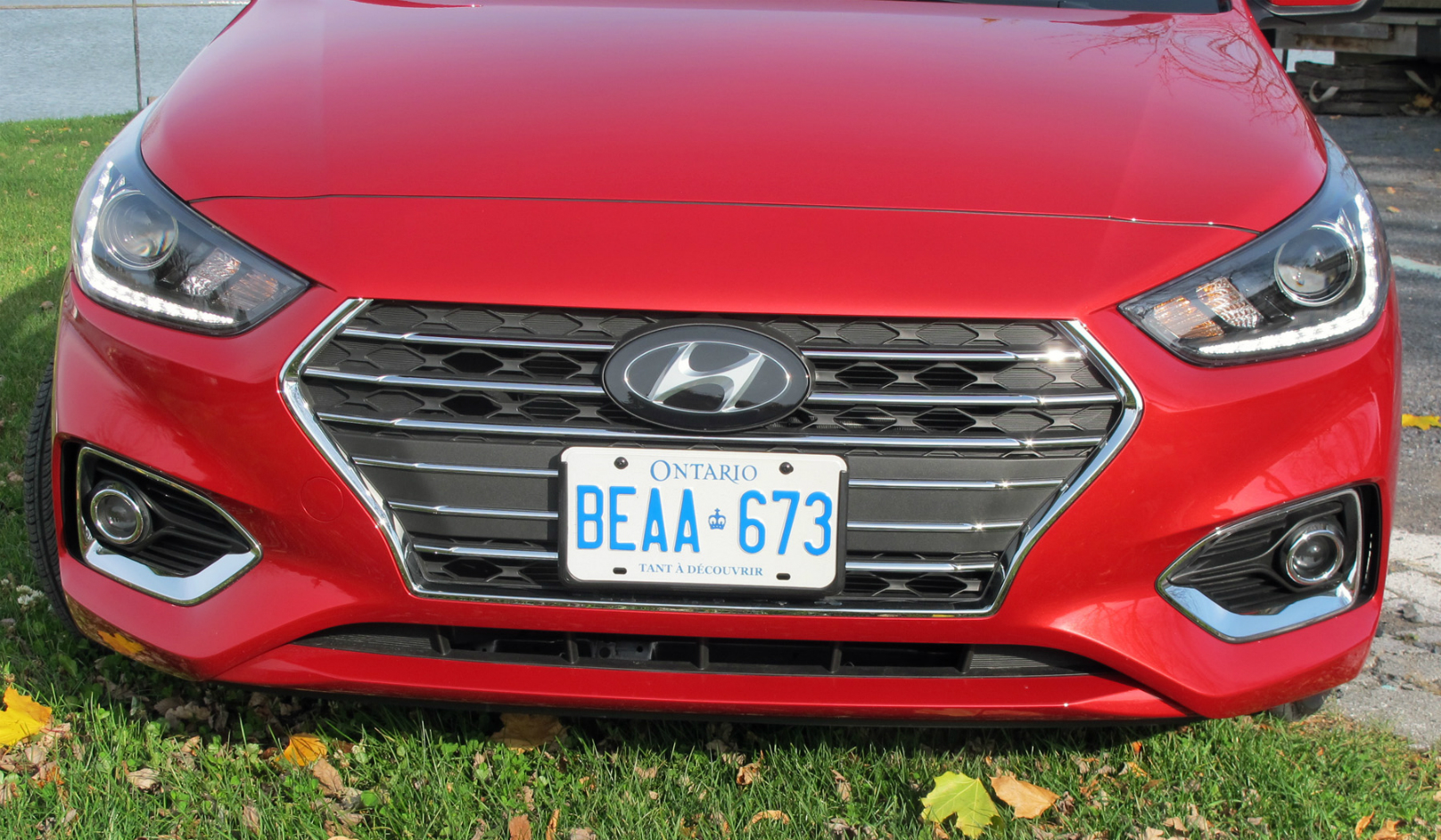 So what they did is what the Koreans do best – learn from the experience, regroup and build something better.

The first move of a new breed of Hyundais was the Sonata compact in 1985, followed by the Accent in 1995 – both of which, along with the Santa Fe (2001) and Tucson (2005) CUVs, vaulted Hyundai into a world-class automaker.

Tested here is the 2018 Excel, which will arrive first in four-door sedan form around the early part of the year to be followed by a five-door hatchback nearer spring.

Interestingly, Canada is getting the hatch, while it won’t be sold in the U.S. 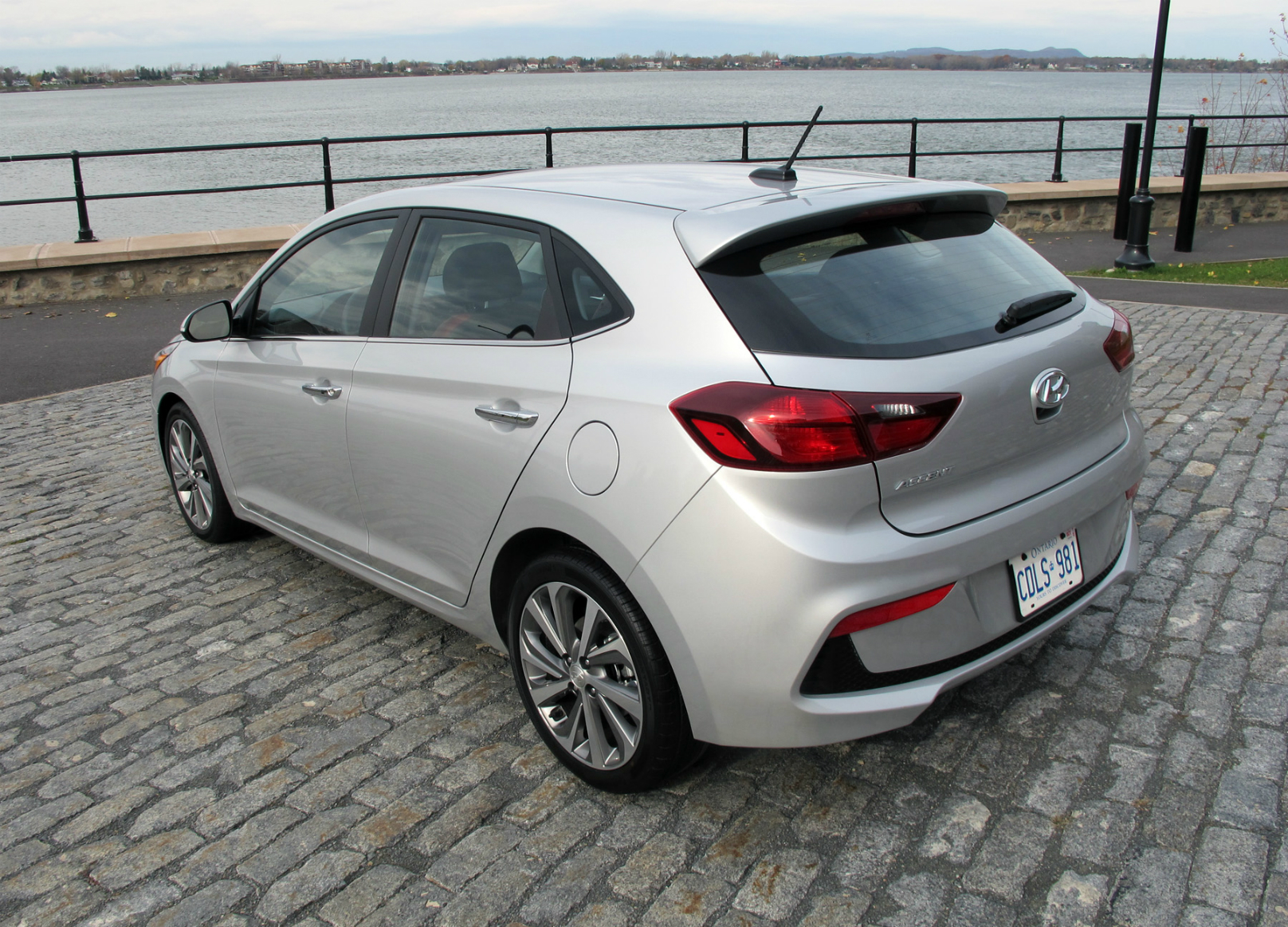 Being the top-selling sub-compact since 2009 means people like it, so as the maker, you don’t mess too much with a good thing.

But Hyundai is very aware customer expectations in many areas are constantly on the rise and one of these areas is style.

At the rear, the sedan has a nicely integrated rear deck spoiler and the five-door has a big, standard rear roof situated spoiler.

A backup camera is standard, but the big news is the availability of a rear proximity trunk opener – a really big thing you hear about on luxury SUVs and now found in the sub-compact segment thanks to Hyundai.

Inside, heated front seats and a heated steering wheel (my new favourite item) are available with a standard five-inch touchscreen with rearview camera, while a seven-inch is available and includes Apple CarPlay and Android Auto.

When it comes to cargo, Accent is claiming best rear volume behind the rear seats of 616 litres on the hatch. 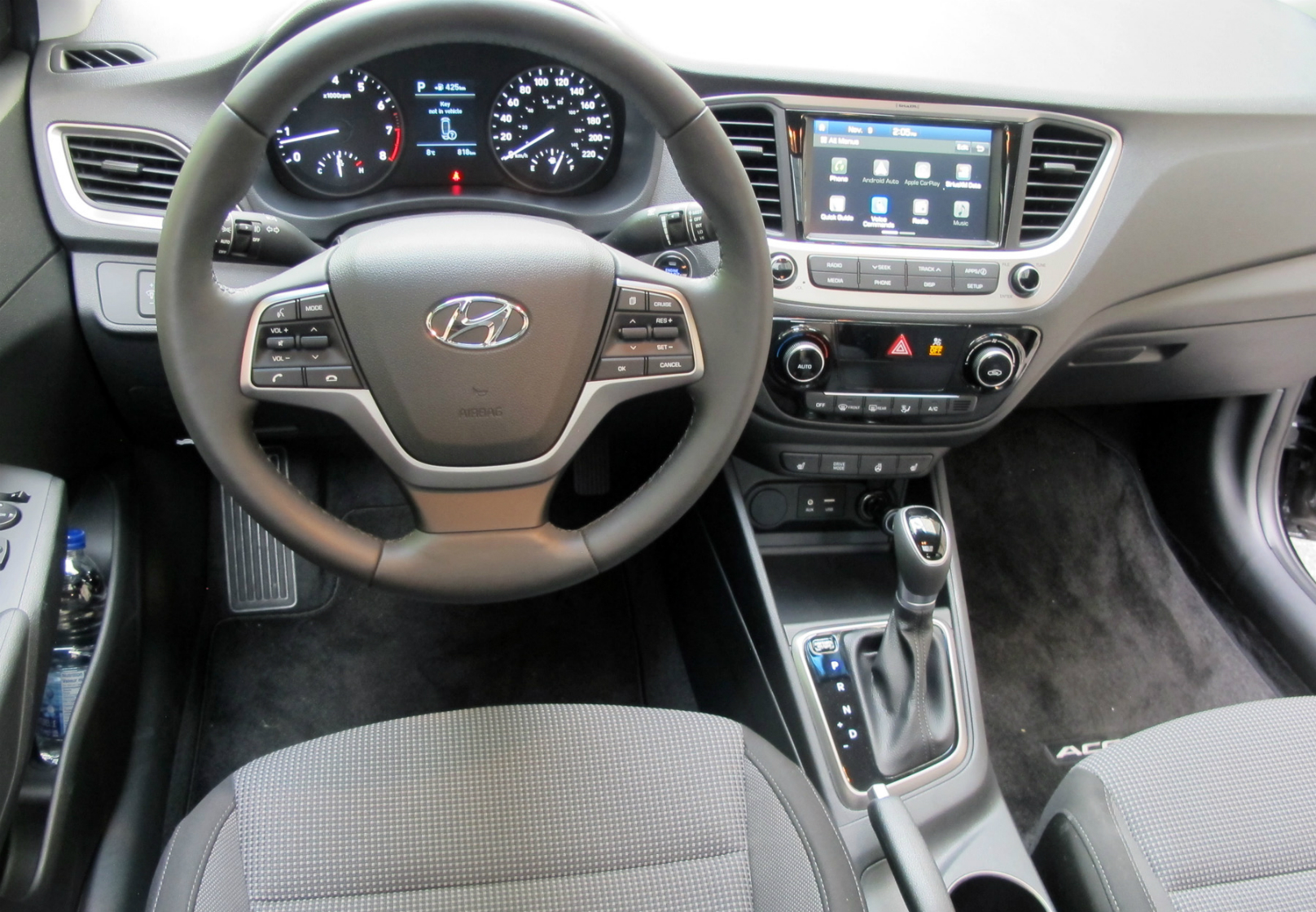 The new Accent is front-drive only with a choice of a six-speed manual or six-speed automatic transmission, depending on model.

All trim versions are powered by the latest version of the 1.6-litre direct injection inline four-cylinder with 130 hp and 119 lb/ft of torque for a 4.6 per cent increase in torque.

Final fuel numbers are still being calculated but, with the manual, fuel consumption is stated as 7.3L/100 km combined for a 6.8 per cent improvement over the previous engine.

Canada will see a choice of four trim levels – L (in five-door only), LE, GL and GLS. Pricing during the media preview was still being calculated, but Hyundai officials said it would be close to the current models, taking the added content into consideration.

Unsaid was that Hyundai must remain competitive with opponents such as Honda Fit, Toyota Yaris and Ford Fiesta if they want to stay number one in the segment.

It would have been hard not to pick a better location to launch the 2018 Accent than in Montreal.

And not just because Montreal is always delightful, but 30 per cent of Canadian Accent sales are there and another seven per cent in Quebec City.

Ride and handling with the MacPherson strut suspension in the front and twist beam in the rear felt more like a compact to my co-driver, who four times said he noticed a significant improvement over the previous Accent. 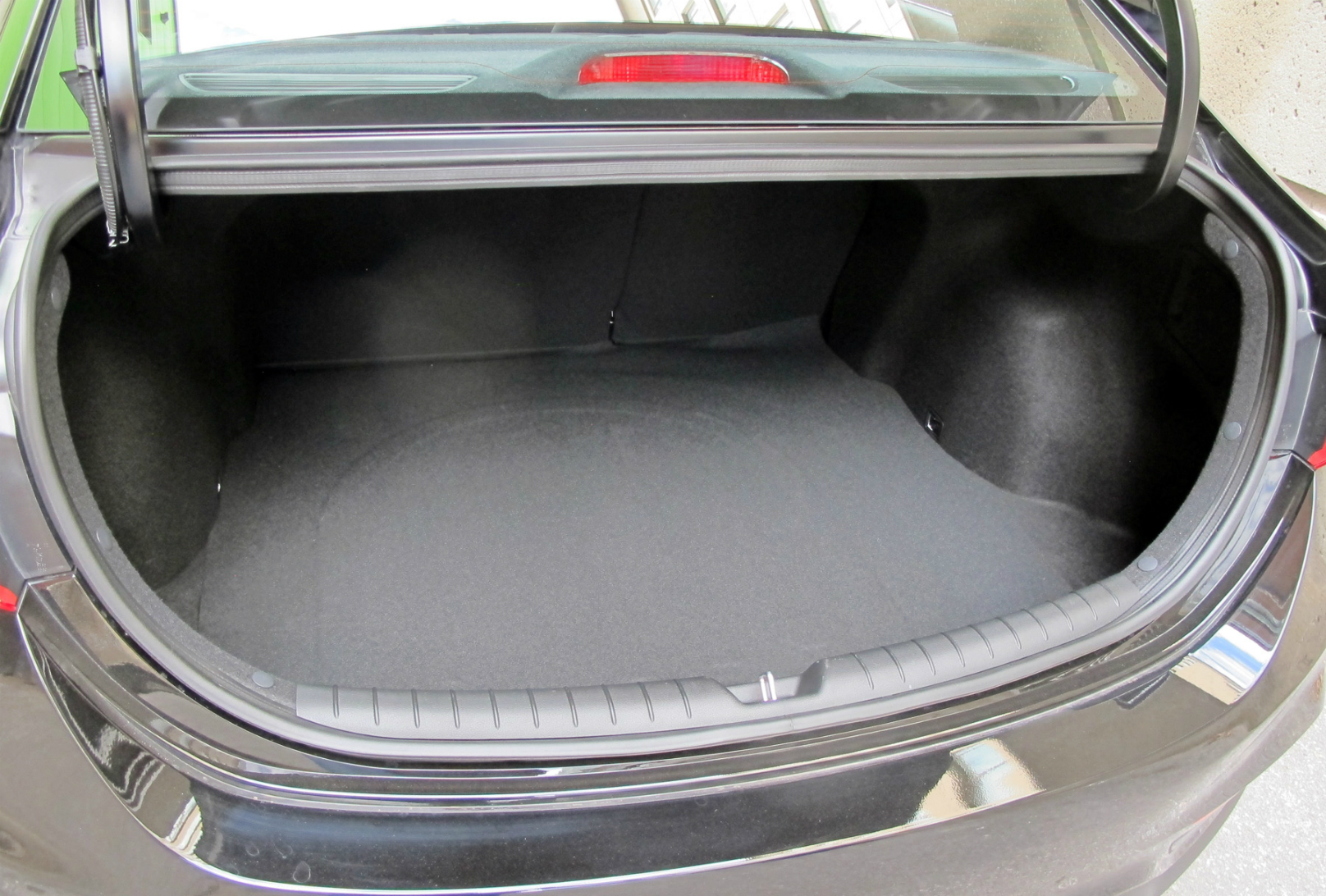 We were driving GLS models with all the bells and whistles Hyundai could shovel in, including my beloved heated steering wheel.

The luncheon objective was Fort Chambly, but we took an early wrong turn and arrived there almost two hours early. So we took the time and explored the area around the Richelieu River and the many charming towns along the way, ending up buying a mound of Quebec cheeses in the process to bring home.

Engine response was quick and steering was light and precise. At more than four meters long, which is big for a sub-compact, it didn’t feel as long and wide as it is.

Interior fit and finish was to a high standard and the seven-inch touchscreen was visible even in direct sunlight.

We all know small CUVs are on the rise, but when you look at the room these cars have, especially the hatchback, Canadians are still going to be attracted to them.

And now with the “Accent” on style and amenities, it looks like Hyundai’s sub-compacts are likely to remain the most popular in the segment. 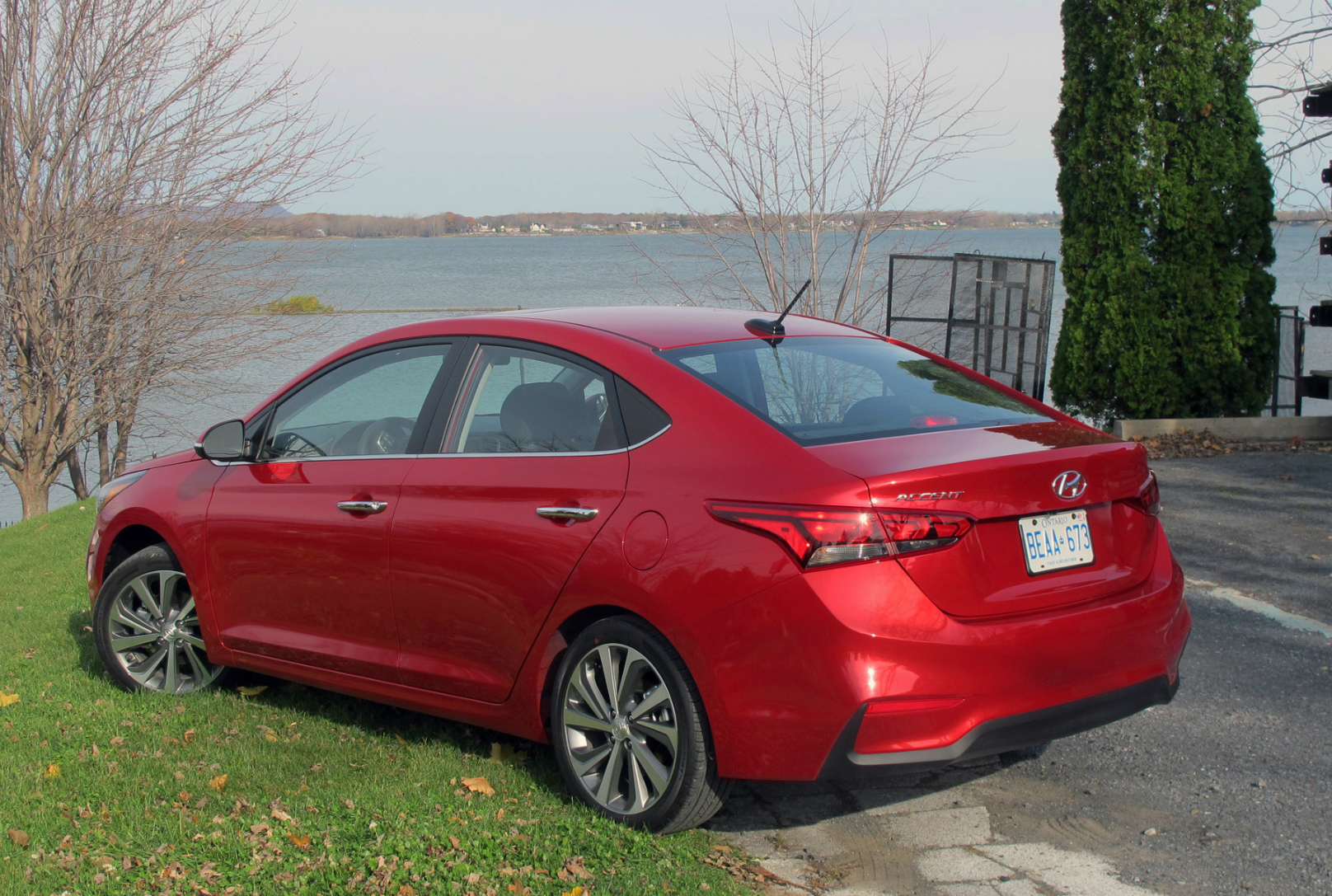