Hyundai Kona Rises to the Top of its Class

Subcompact SUV stands out from the crowd and is ‘Sport Cute.

TOFINO, B.C.-A few years ago, there was no such thing as a subcompact SUV.

Now dealerships are awash with them at just about every price point. It is the fastest-growing segment in Canada, up some 32 per cent in 2017 versus 2016.

The latest entry, the Hyundai Kona, immediately leaps if not right to the head of the field, at least into the very front ranks. It is on sale now, starting at $20,099.

Some will find the styling a little out there, but I thought it looked good, bringing to mind a phrase originated by a former colleague — “Sport Cute.”

It seems vehicles in this class don’t play on the mostly-faux “rugged off-road” image of bigger SUVs, but are distinctly urban vehicles. So, alloy wheels don’t look quite as silly on this one as they do on most.

Kona is offered in five trim levels. Starting at that $20,999 price point is “Essential” — I guess that nameplate is self-explanatory …

Hyundai claims this is the lowest-priced subcompact SUV with an automatic transmission on the market. Sounds a bit like they are picking their spots, but especially in these low-cost segments, price is always a huge factor.

For this, you get a 2.0-litre, Atkinson cycle, four-cylinder engine developing 147 horsepower and 132 pound-feet of torque, peaking at 4,500 r.p.m. It is mated to a six-speed automatic transmission.

An extra $1,750 gives you the “Preferred” level with the same powertrain and a bunch of equipment, including a push-button start, which for some reason Hyundai calls “Smart Key.”

On these two trim levels, an extra two grand brings full-time, four-wheel drive, which normally is about 95 per cent front-drive, automatically switching to as much as 50-50 front/rear, should traction conditions warrant.

On the 4x4s, a fully independent rear suspension replaces the semi-independent twist-beam setup on the front-drivers. The front end has MacPherson struts in both cases.

Next up on the price ladder is “Trend” at $26,899. Along with four-wheel drive and a bunch of luxury goodies like head-up display comes a high-tech, 1.6-litre turbocharged engine, generating 175 horsepower and a lusty 195 lb-ft of torque arriving at an ultralow 1,500 r.p.m. It is bolted to a seven-speed, dual-clutch automatic or manual transmission. 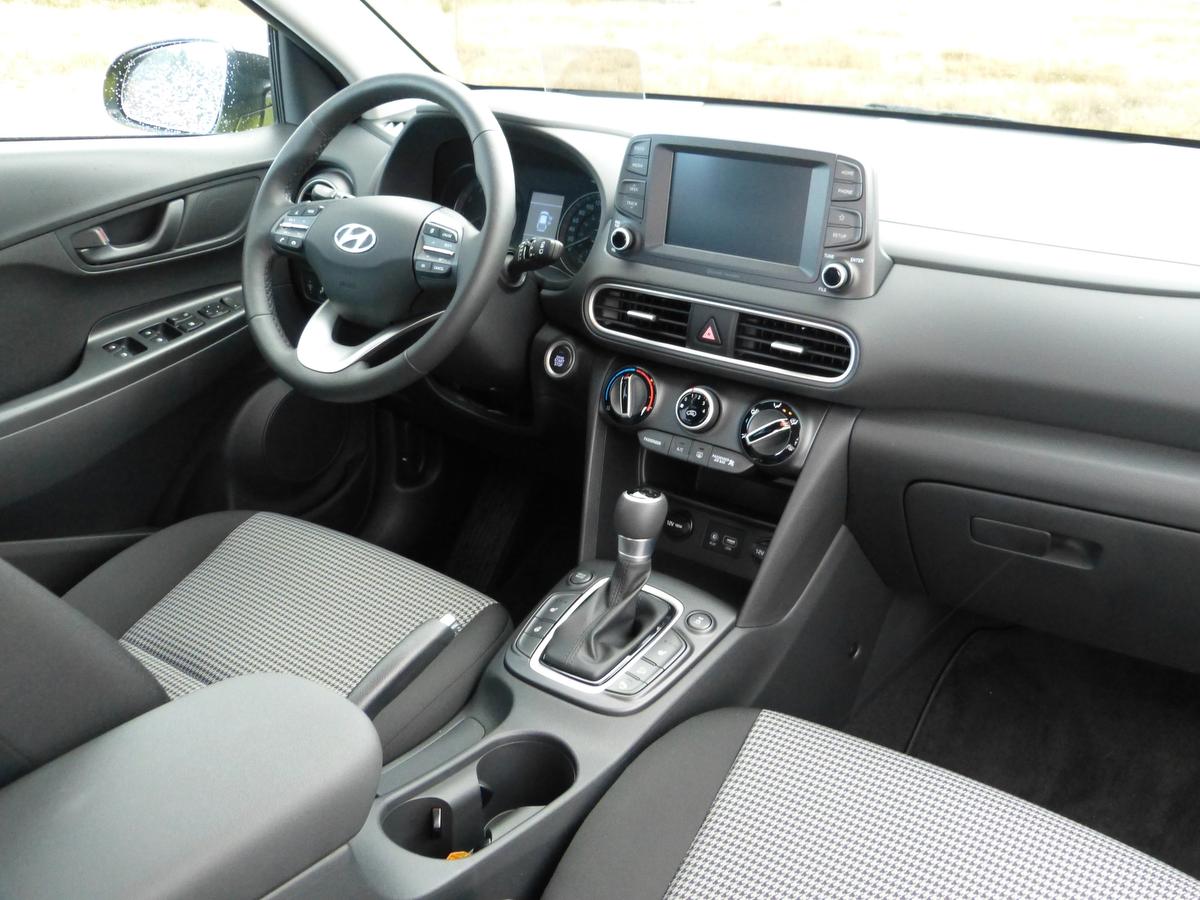 Next up is “Luxury” at $27,499, which despite the price hike goes back to the 2.0-litre engine, again with four-wheel drive. It gains a boatload of luxury amenities including power sunroof, leather upholstery, automatic air conditioning, and power driver’s seat, plus a handful of so-called driving aids like lane-keep assist, automatic braking, and forward collision avoidance alert.

Topping the range is “Ultimate” at $31,799, above which you apparently cannot go. That’s what “ultimate” means, yes? This includes a SatNav system, LED low-beam headlights, wireless phone charger (if your phone is compatible), and an Infinity high-end sound system.

You will have to sit down with your sales rep, a large mug of coffee, and the spec sheets to figure out which trim level is right for you. Hyundai Canada says they have packaged the equipment according to what people want, so you’d best hope you’re like whoever those people are. Regardless, you will get an appealing vehicle.

Hyundai laid on a subset of Kona’s bright colour palette from which to choose. We nabbed a “Pulse Red” Luxury for the drive/ferry boat ride from Vancouver to the Island, then hopped into a bright “Acid Yellow” Trend you see in the pics for the sprint to Tofino.

The 2.0-litre engine is surprisingly peppy, the usual torque hole left by the Atkinson cycle operating system not being at all noticeable. The transmission did its job without drawing attention to itself, which is what an automatic transmission should do.

The 1.6 turbo is downright snappy. The torque comes in at low revs, and flings the car ahead with surprising alacrity. The dual-clutch gearbox shifts quickly and precisely, as they do.

One drawback — the manual-shift function for the autobox works backwards. It should be pullback to upshift, push-forward to downshift. Think about how your weight transfers when you are accelerating versus braking; it is, or should be, so painfully obvious, but so few get it right.

Our yellow tester had the black-painted roof — it is also offered in grey with some body colours — which is not available when you choose a sunroof. The sunroof remains one of the most-ordered yet least-used options in the car game. I’d go for the painted roof, even if some people might confuse the car with the Volvo XC40 tested here a couple of weeks ago which has a similar feature.

(I have often wondered if there is some secret designers’ convention where they all get together and decide, “OK, for 2018, we’ll all make black roofs!”)

One detail the designers did get wrong is the position of the backup lights. These are way too low, almost at bumper level. They have to be higher — I mean, the main point of backup lights is to warn other drivers that you are backing up. Especially in city traffic, where the Kona is expected to mostly operate, you can hardly see them. Land Rover made a similar mistake with turn signals many years ago, and quickly corrected it. Hyundai, please copy.

The interior is generally well-executed in what appear to be high-quality materials, with some nice details like contrasting stitching and trim bits on uplevel models. There are a few spots where you can see body colour peeking through the trim which takes a bit away from the high-class ambience.

The seats meet the “comfortable yet supportive” criterion. The rear seat is a bit less roomy than some others in this class, but it is most likely going to be carrying gear rather than people. To this end, a split-folding rear seatback is standard on all trim levels.

The head-up display available on pricier models is rather like Mazda’s, in that it projects not onto the windshield but onto a Plexiglas screen that pops up behind the dash.

Over half the body structure is high-strength steel — Hyundai is one of the world’s biggest steel makers. You’ll not only appreciate this if you have a major moment in the car; the other 99.999 per cent of the time, the stiff body pays off in better ride quality and a more solid feel.

The one aspect of Kona’s performance that is beyond expectations is its ride and handling. Then again, ever since Albert Biermann arrived from BMW as Hyundai/Kia’s VP of engineering, their vehicles have made great leaps in this area. Biermann is quick to give credit to his engineers, saying all they needed was a little coaching on how to make suspensions supple for good ride, yet also deliver crisp, confident handling. Kona scores at or near the top of the class on these counts.

As noted at the start, there are lots of vehicles in this price/size/functionality class to choose from. All of them have strong points.

If you don’t mind standing out from the crowd, Hyundai has just made your decision a whole lot tougher. 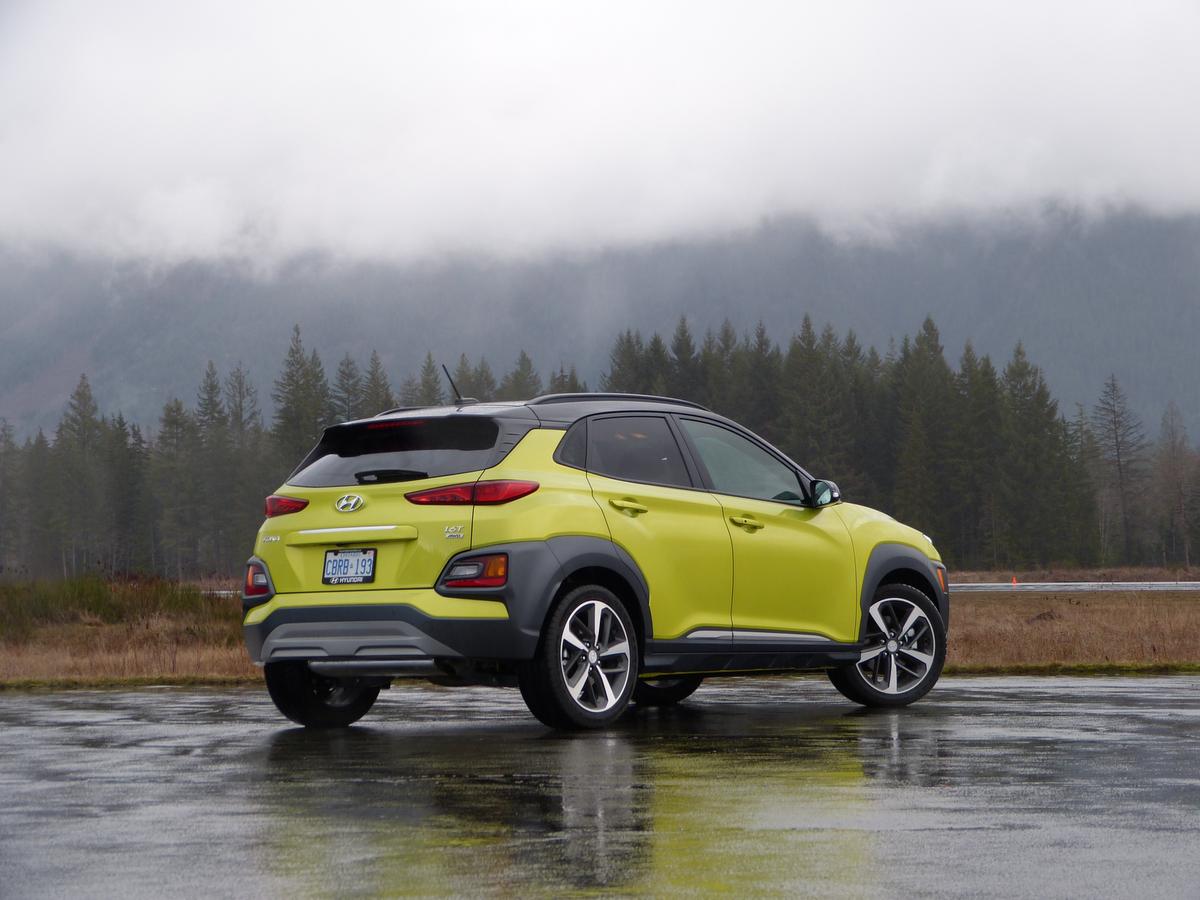