Chrysler says the new hybrid van can get 48 km in electric mode and travel up to 850 km on a full tank of gas, the Chrysler Pacifica Hybrid is a van many Canadian families will fall in love with.

SANTA MONICA, CA: Oh if only my kids were young again when every weekend we would load up the van to get to a soccer, basketball or hockey tournament.

I miss those days and Fiat Chrysler Automobile (FCA) Canada’s unveiling of the Pacifica Hybrid van in Santa Monica, California, just before the LA Auto Show opened made me miss those days even more.

Making those trips in our older Dodge Caravan was always fun but removing that third row bench seats was always a hassle.

Chrysler’s new hybrid van would have made the trips easier on both my back and my wallet.

Chrysler says the new hybrid van can get 48 km in electric mode and travel up to 850 km on a full tank of gas. 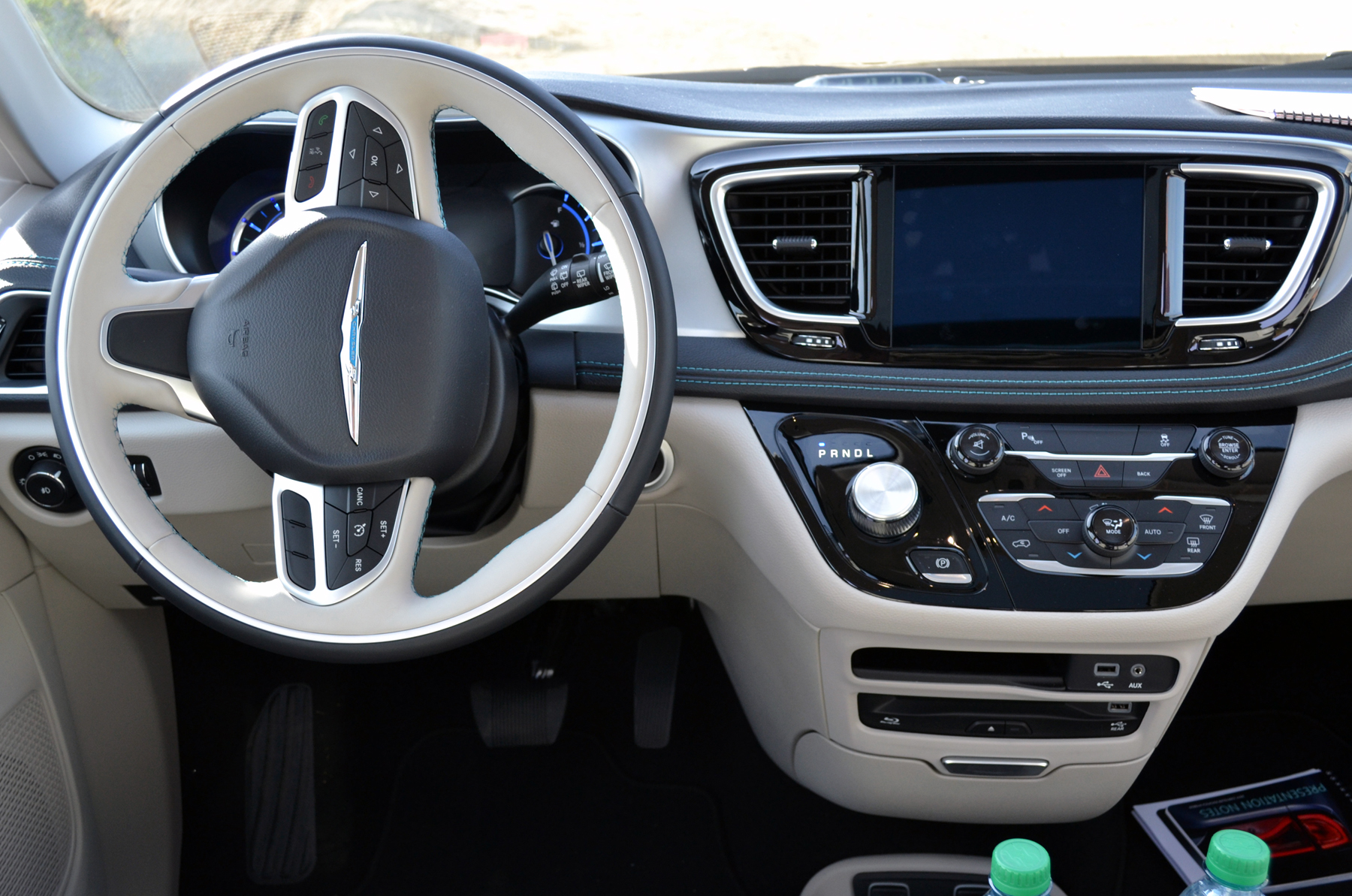 The 2017 Chrysler Pacifica Hybrid features a well-designed dashboard with an 8.4-inch touchscreen.

I don’t remember getting even close to that mileage in my old Caravan. FCA executives said that mileage would let you drive from Windsor to Ottawa without stopping for gas. The van would take 14 hours to recharge using 120 volts and just two hours with a 240-volt system.

While Chrysler has already released the new updated gas version of the Pacifica in Canada, the hybrid version will be available early in 2017.

It will be available in only one model, the Platinum edition, which will feature everything a family will need to get to their destination safely. The only option on the hybrid will be a $1,700 sunroof.

The Hybrid Pacifica will sell for $56,495 but will qualify for a full rebate of $14,000 through the Ontario government’s incentive program to support the purchase of hybrid vehicles. 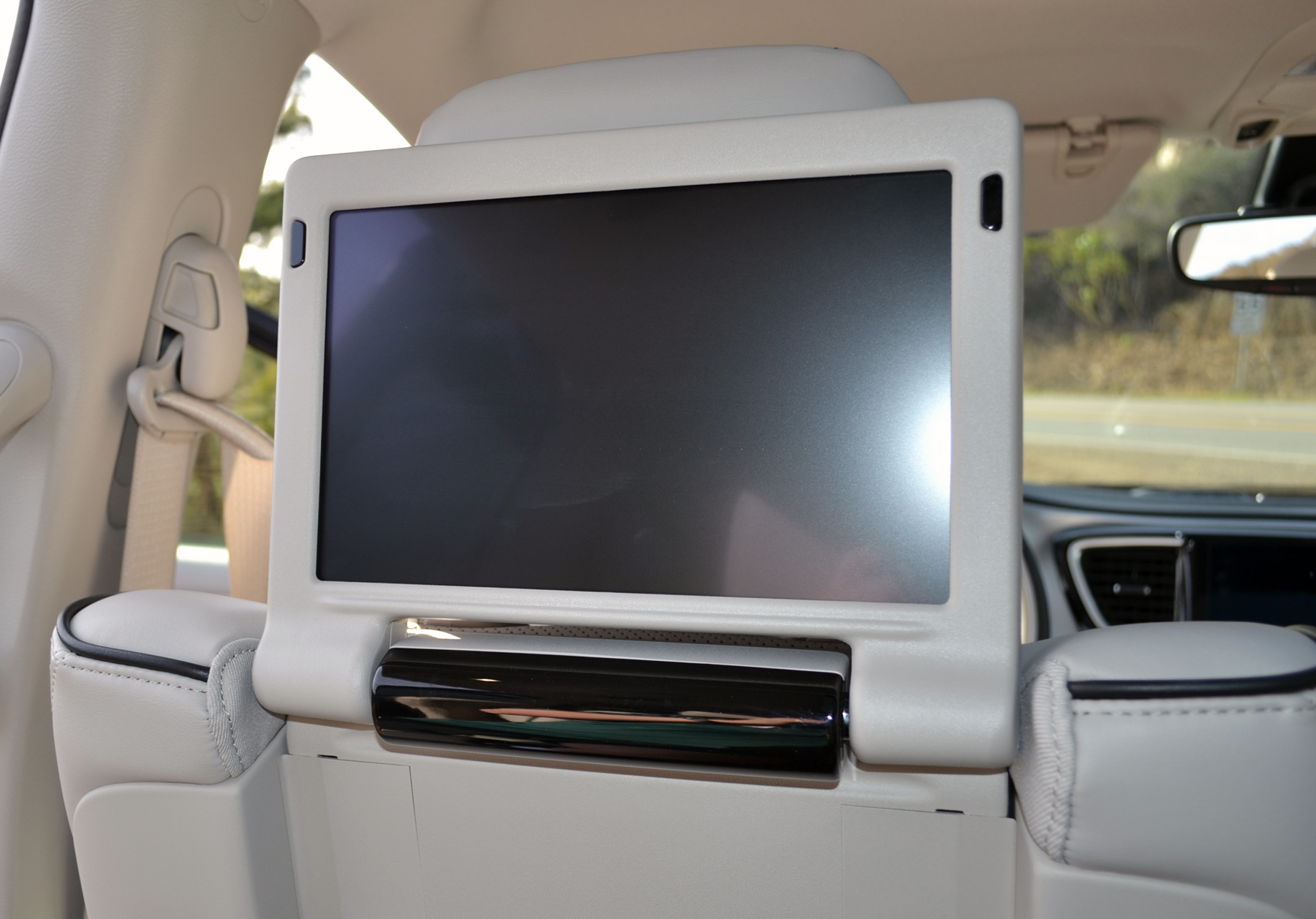 The 2017 Chrysler Pacifica Hybrid features a unique Uconnect system that allows passengers in the second row to play games against and with each other.

That incentive is $8,250 in British Columbia and $8,000 in Quebec. Those are the only three provinces providing hybrid incentives.

Besides being a hybrid, the unique aspect of this minivan from its gas counterpart is the loss of the second row stow and go seats.

For those buyers worried about the technology involved with a hybrid, FCA offers a 10-year or 160,000 km warranty, which is transferable to the second buyer.

It is engineered to always be in the most efficient mode while driving.

Also Read:Any Odyssey would be fun with this Honda minivan

If you don’t use any gas for weeks at a time, he added the van’s tech system will burn off any stale fuel and the instrument cluster will inform you that is happening.

But as always, the proof is in the driving and the first thing I noticed about the Pacifica was the fact it switched quietly from electric to gas motor.

During one part of the drive, my co-driver and I ran out of juice and were able to get 17 per cent power back into the battery while using the brakes heading down some steep hills.

The motor instantly switched back into electric mode. 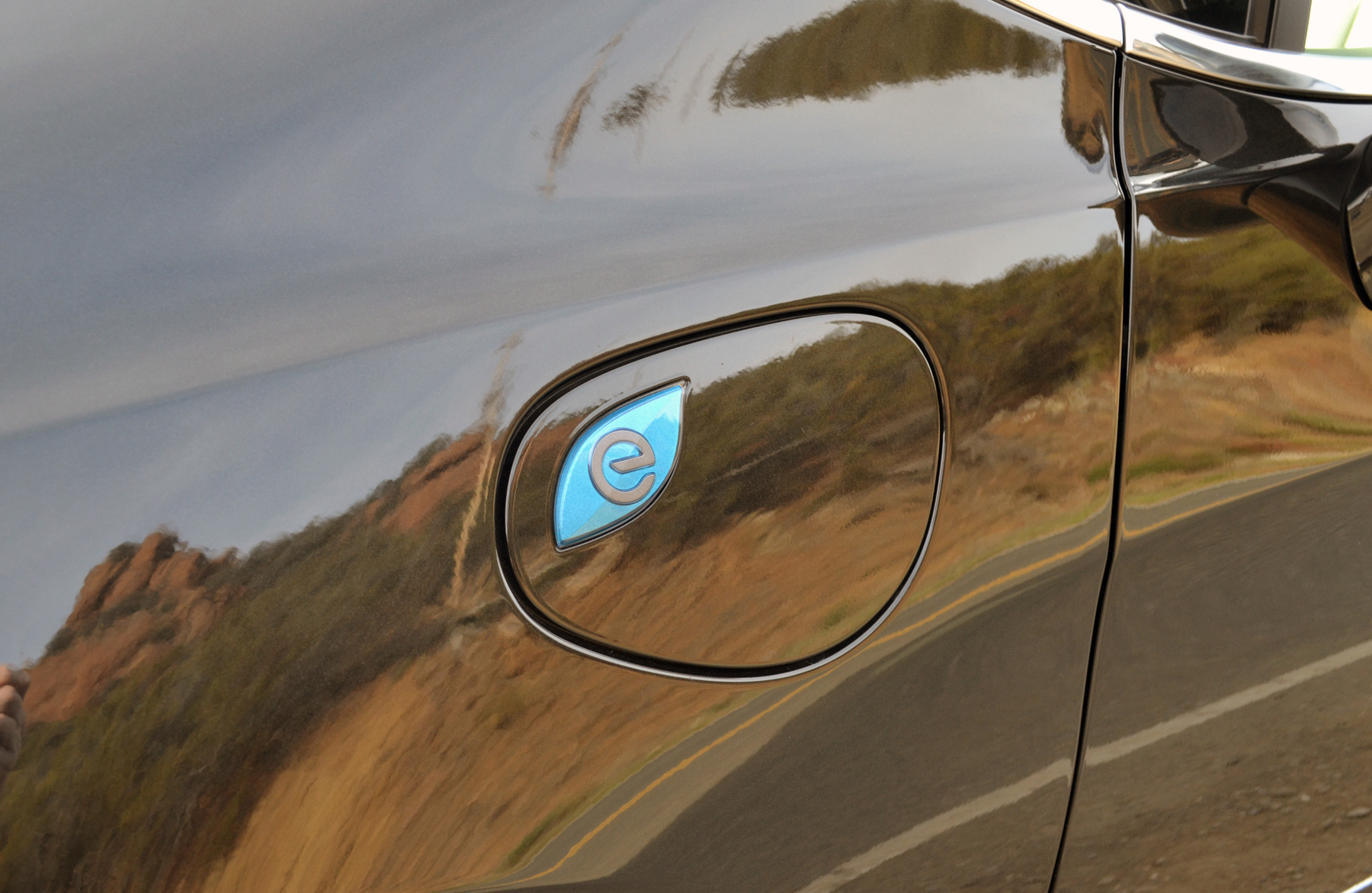 The 2017 Chrysler Pacifica Hybrid can be fully charged in 14 hours with 120 volts or in two hours with a 240-volt system.

On our test drive we got to our first destination almost 30 miles (48 km) from our starting point using only the electric motors which where quiet and offered plenty of power.

The Hybrid Pacifica offered a smooth ride and even if you have to remove the second row seats, there is plenty of room for whatever your family needs to throw in it for a weekend of activities. In fact, FCA went out of the way to note the Hybrid Pacifica can carry 64 sheets of plywood.

One of the innovative ideas I heard others who have driven the gas model talk about was the Connect system, which their kids loved.

It features two screens for passengers in the middle seats who can play games with each other such as tic-tac-toe or checkers. The option is standard in the hybrid model. 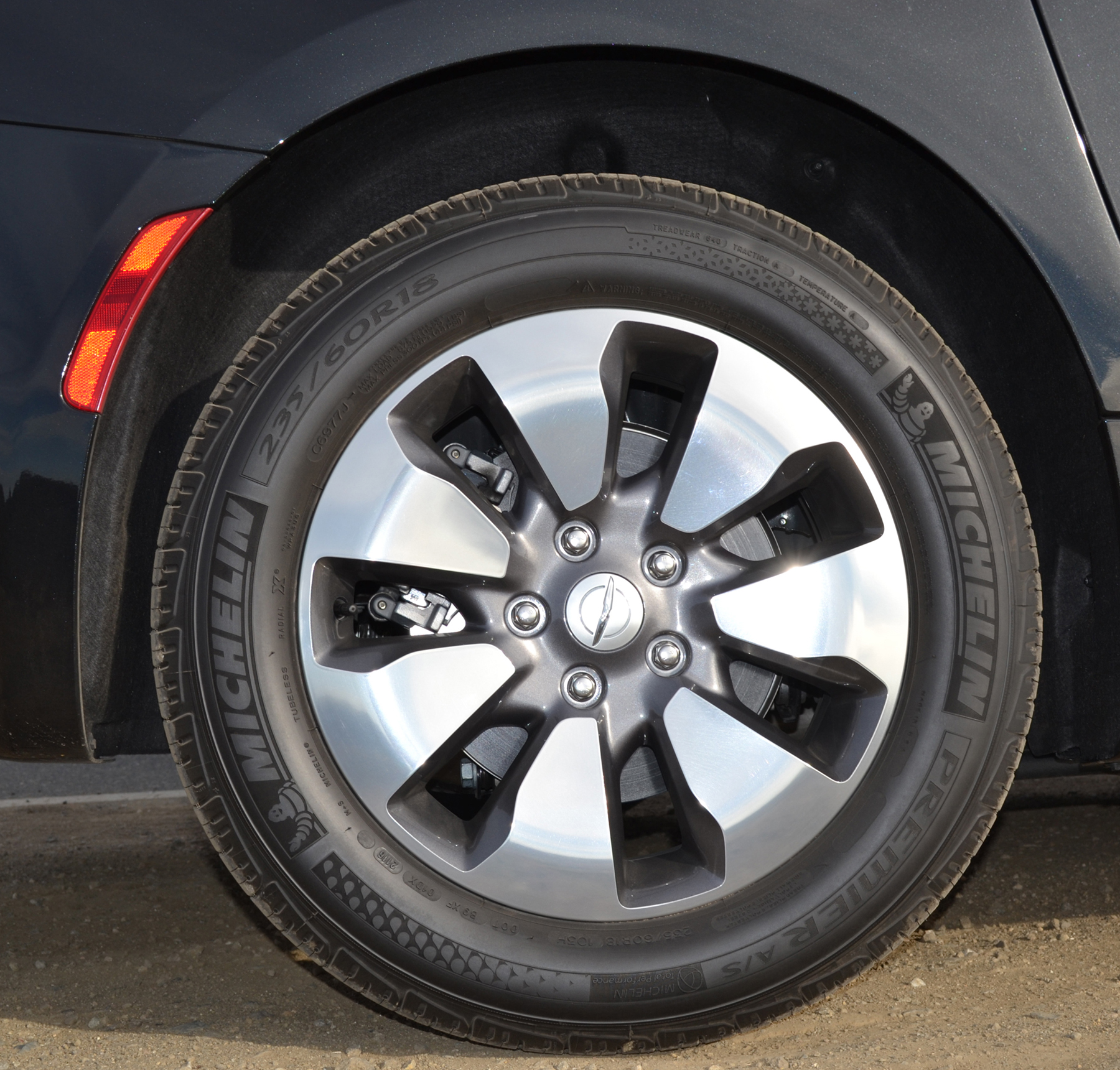 While the drive didn’t differ much from the Toyota Sienna and Honda Odyssey vans I have driven recently, I can say the Pacifica’s dashboard is the nicest and best laid out of the three. It didn’t take a rocket scientist to figure out the infotainment system and everything you need is within easy reach.

I’m not sure about the round silver knob for putting the car into gear. I do like the shifter but after a while I got used to the knob and realized it offered more space for storage.

If you can afford it, the Chrysler Pacifica Hybrid is a van many Canadian families will fall in love with. With the Ontario incentive it also comes in at less than the price for a comparable gas-powered Pacifica.

FCA notes two per cent of the vehicle market is electric vehicles and with the new Pacifica Hybrid, FCA just may see a jump in those figures. 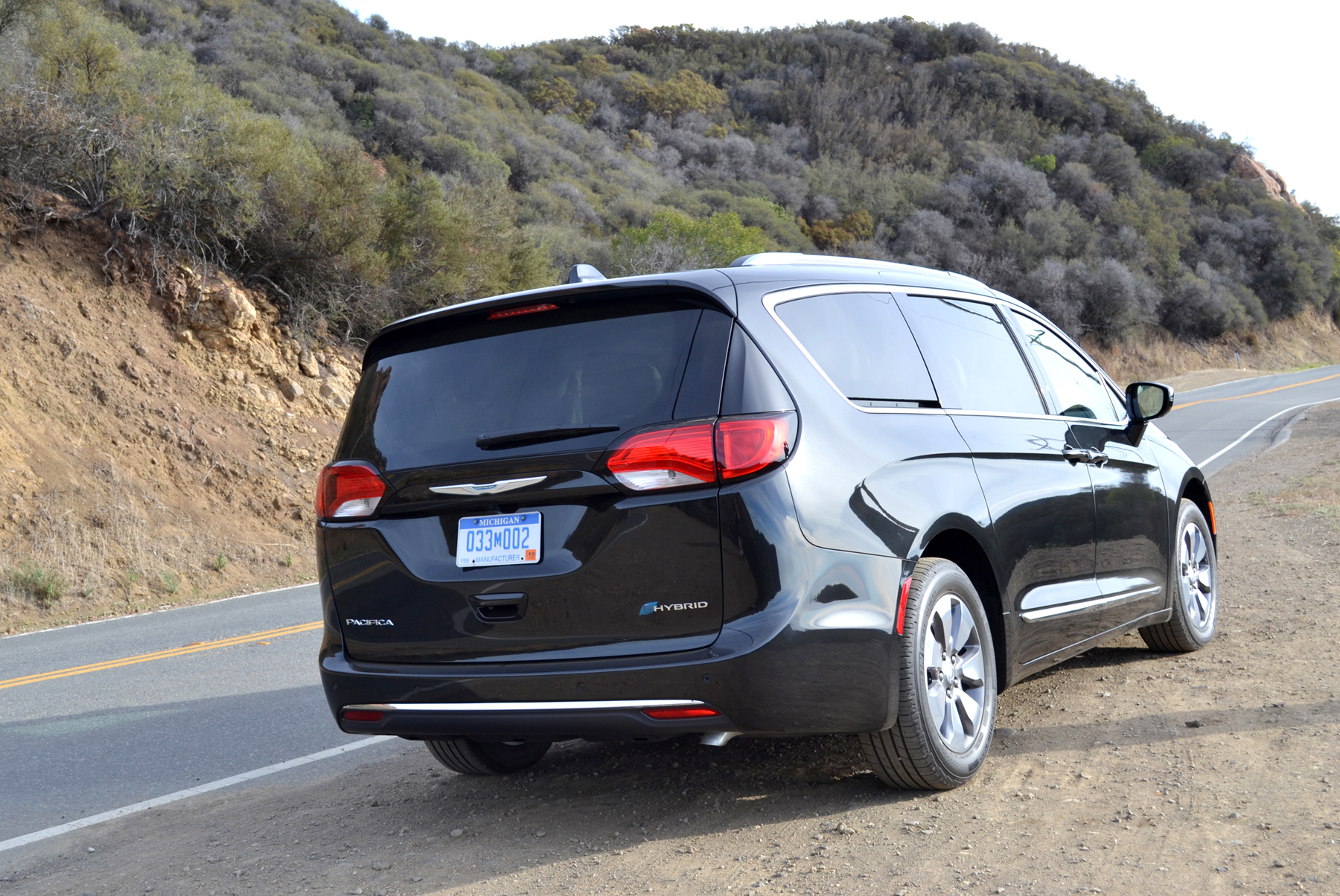 The rear of the 2017 Chrysler Pacifica Hybrid is dominated by a large liftgate with low lift over opening the way to a full 5,587 litres of cargo space behind the front seat, 2,477 litres behind second row seats and 914 litres behind third row seats