Hot hatch that is so very cool

Like most, I had Ferrari and Lancia posters hanging on my bedroom wall, but this was the car that could actually be seen driving around the neighbourhood.

Outwardly, the Focus RS has a much more aggressive stance than the regular car.

The split grill is much larger, which optimize engine cooling, there are brake cooling ducts and vertically mounted fog lamps.

At the back, it is the oversized spoiler and exhaust pipes that flank the rear diffuser that differentiate it. The look, especially when dressed in brilliant blue paint, sets the RS apart from its tamer siblings.

Also Read: Ten classic Hot Hatchbacks that started it all

However, there is one button that truly differentiates this speedster from all others — Drive Mode. This gives the driver the choice of Normal, Sport, Track and crazy Drift modes.

Each changes the driving characteristics dramatically. 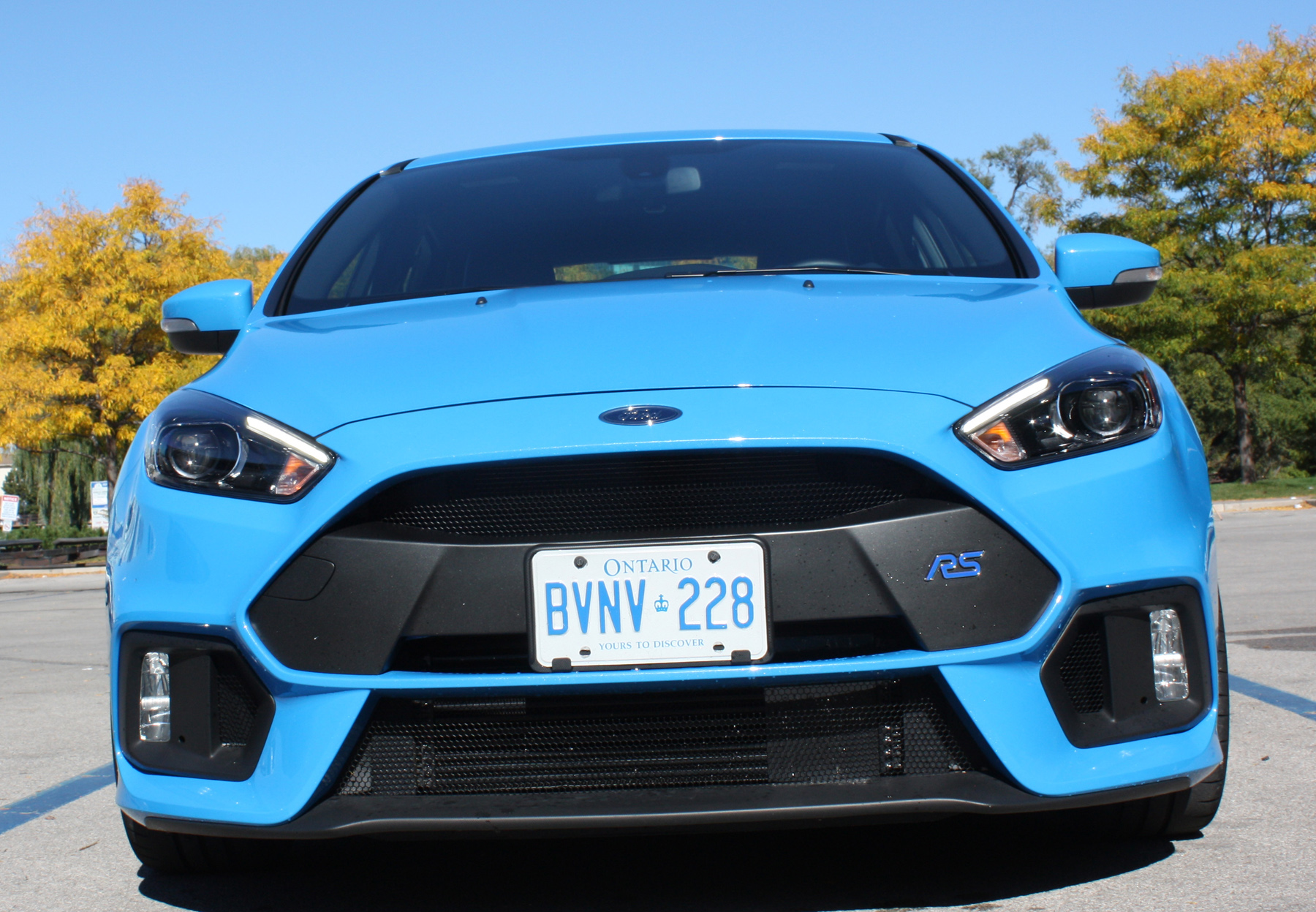 The split grill is much larger, which optimize engine cooling, there are brake cooling ducts and vertically mounted fog lamps

Slip behind the wheel; press the ignition button and the engine springs to life with an angry growl.

Revving it up agitates the awakened beast and makes it roar. Not only do you hear the ferocity, you can feel it.

The exhaust tone comes from the 2.3–litre turbocharged four-cylinder found in the EcoBoost Mustang.

However, to make it more RS-like it has a larger turbocharger, tweaked cylinder head and a much larger intercooler. This work ups the output by 40 hp and 30 lb/ft of torque more. The result is the RS an astounding 350 hp and 350 lb/ft of torque. 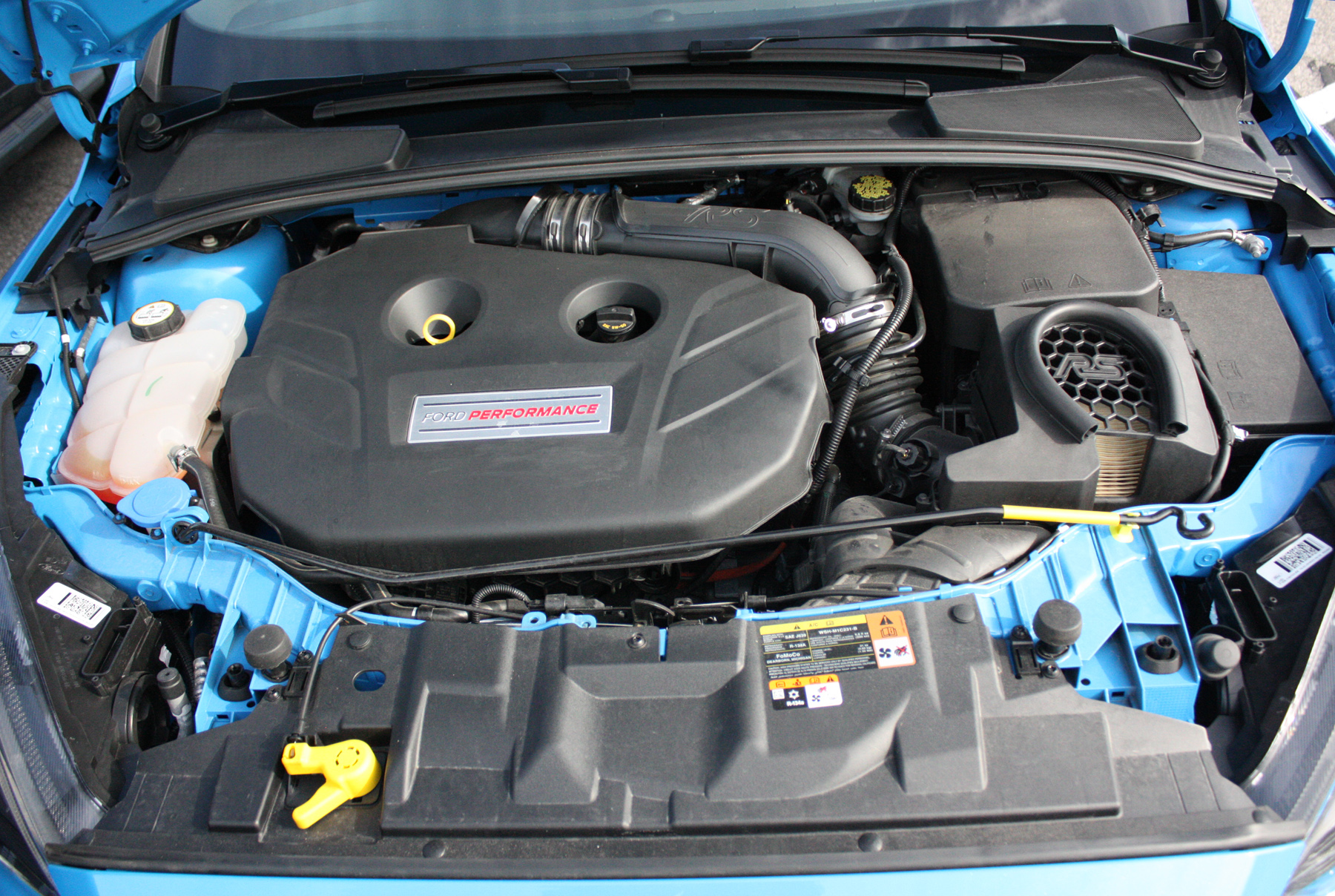 The RS’s 350 hp 2.3–litre turbocharged four-cylinder comes from the EcoBoost Mustang. However, to make it more RS-like it has a larger turbocharger, tweaked cylinder head and a much larger intercooler.

The only transmission is a smooth and crisp-shifting six-speed manual.

In Normal Mode, the engine is willing but civilized and the clutch is light and easy to balance between shifts. You can really feel the raw power and get a better understanding of why the seats had to be so supportive.

The ride isn’t the smoothest, as you feel nearly every bump, but this adds to the character of the RS — you really feel as if you are in a rally car.

Also Read: Top 10 highlights of the Ford compact with “RS” badges attached to its tailgate.

It also sticks to the road like a real rally car thanks the Michelin Pilot Sport Cup 2 tires and an advanced all-wheel-drive system. 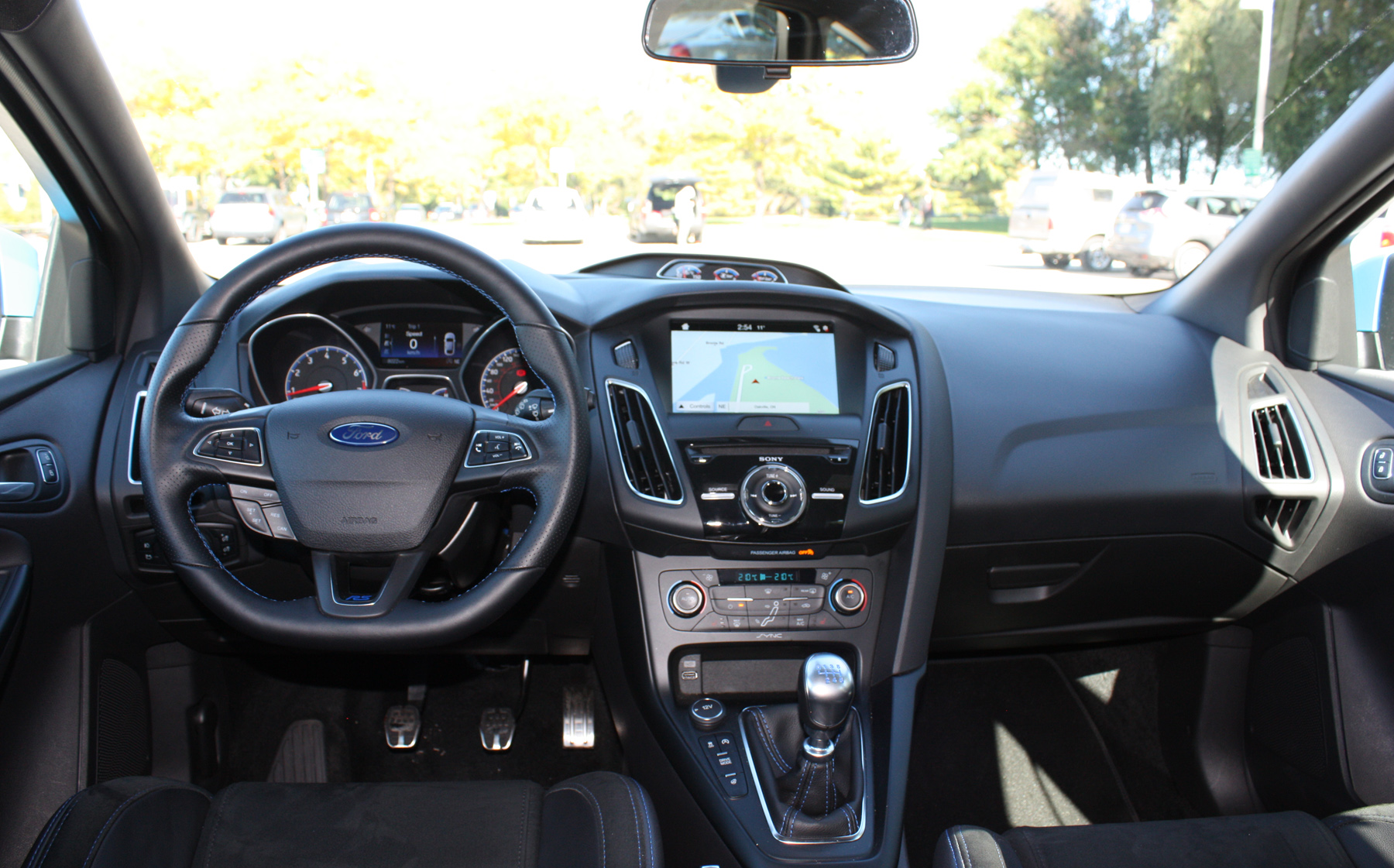 If a wheel spins or the computer detects steering input it activates a torque vectoring system. Two clutches at the rear axle allow up to 70 per cent of the power to be sent to one wheel or it can act like a limited slip differential.

Beyond this ability, it dabs the brake on the inside rear wheel to reduce understeer. This combination not only instills driver confidence in normal driving conditions, it enables Drift mode to do its thing.

It does take time to get used to the raw power as the acceleration is blistering, but the sure-footed handling brings driver confidence in the RS’s true capability. 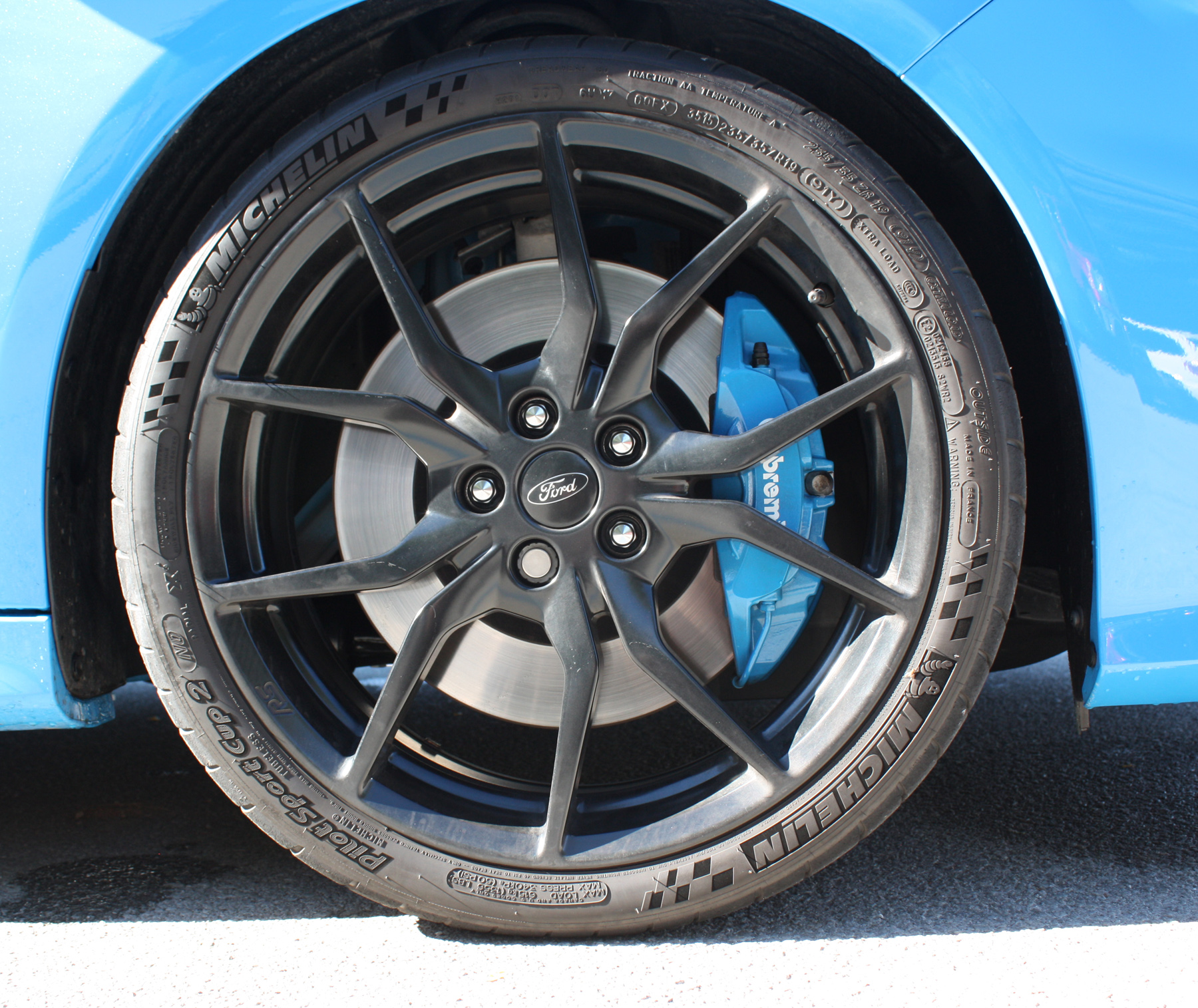 Everything becomes more intense. The steering felt stiffer and the suspension tightened up so you really feel the road. It also amps up the exhaust note — bliss.

The engine also spools up a lot faster, which mandates quicker gearshifts in order to avoid the rev limiter.

The other two Drive modes, as the vehicle warns, are for track use only. Unfortunately there was no track time during the test, but I did test them — a little! Track Mode changes the set up again and turns most of the driver assist electronics off.

This hands total control of the vehicle to the driver so you must have your wits about you when in this mode. I did push it, but decided to back off and wait for some track time.

Then there is Drift Mode. It takes the RS to another level altogether. It introduces understeer, relaxes the suspension and helps the driver balance the car, albeit sideways, around corners. I wasn’t totally comfortable doing this in my surroundings and so turned it off rather quickly.

Again, I will save this wild mode a drift competition!

The test proved the Focus RS to be the perfect mix of a daily driver and very competent track car.

The aggressive styling and outstanding performance then serve to set it above its peers — watch out Volkswagen Golf R.

Yes, the RS designation has been a long time coming to Canada, but it was well worth the wait! 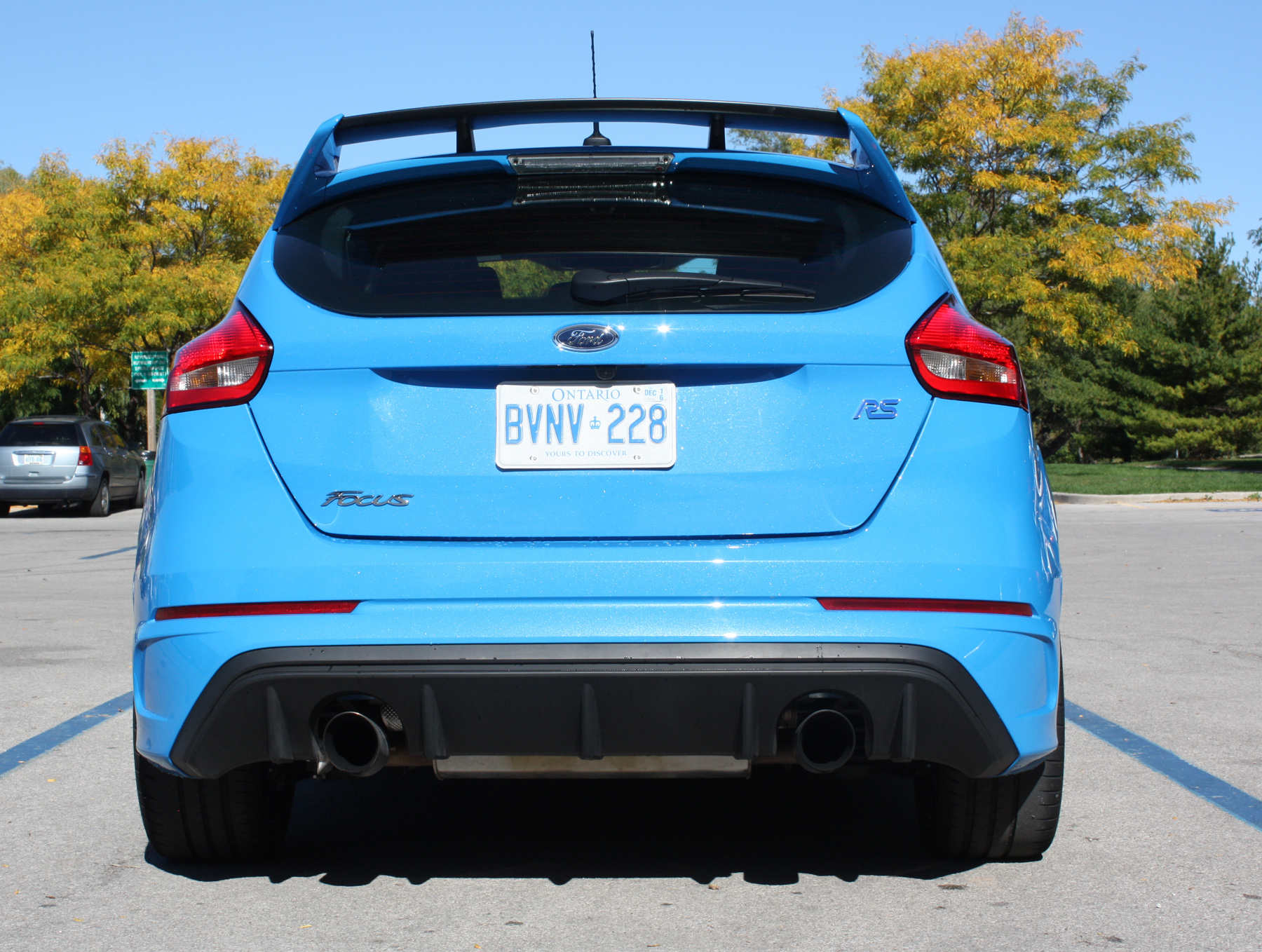 At the back it’s the oversized spoiler and exhaust pipes that flank the rear diffuser that differentiate it. The look, especially when dressed in brilliant blue paint, sets the RS apart from its tamer siblings.