It may not be the most eye-catching of cars on the road today, but I don’t think that was ever the intention. Everything about the Clarity is about practicality, function and efficiency.

PHOENIX, AZ: It was way back in 2000 when Honda first introduced us to the Insight one of the first mass-produced electrified car in North America.

Since then almost every auto manufacturer has jumped on board the electrification bandwagon and left Honda in their dust.

Not that Honda has been sitting idle though.

They have now made a pledge that two-thirds of all their line up will have electrified propulsion, in some form, by the year 2030.

Considering that at the time of the statement (all they had in their line up was the new Honda Accord Hybrid) makes it an exceptionally bold one. 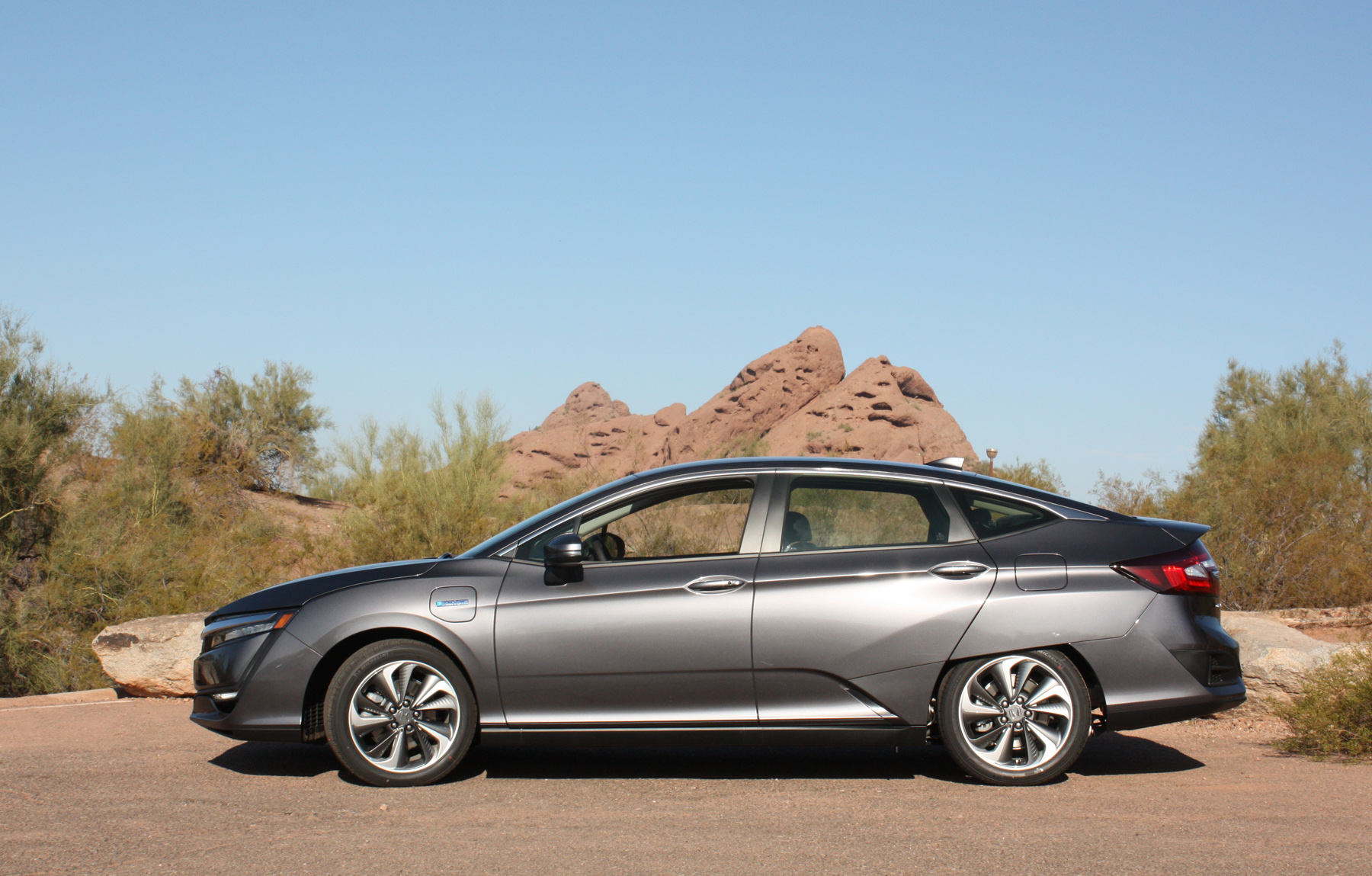 The Clarity has been around for a few months, but only available in California as a hydrogen fuel cell or fully electric model.

The introduction of the Clarity PHEV to Canada and the remainder of the United States solidifies Honda’s commitment to the inevitability of the electrification of vehicles in the future.

It may not be the most eye-catching of cars on the road today, but I don’t think that was ever the intention. Everything about the Clarity is about practicality, function and efficiency.

Under the hood is a 1.5-litre Atkinson-cycle four-cylinder engine linked to two electric motors and a 17 kWh electric battery pack.

The engine will only drive the vehicle under very specific conditions when cruising at highway speeds.

Ninety per cent of the time it acts as a generator charging the battery pack with the electric motor providing power to the wheels.

Charging the battery pack takes just 2.5 hours when connected to a 220 volt charging station but will take 12 hours when trickle charging it on a 110 volt outlet.

A full charge will give the Clarity an electric driving range of 76 km with a total drive range with the gasoline engine of 547 km, not bad considering the gas tank only holds just over 26 litres.

The gas engine pushes out 103 hp and 99 lb/ft of torque on its own, but with the coupling of the electric motor the power is raised to an impressive 181 hp and 232 lb/ft of torque.

The interior is spacious and uncluttered.

The dash is minimalistic and neatly laid out with all dials easily read. The large touch-screen infotainment system is neatly mounted centrally on the dash and is functional and easy to use.

The only let down is the lack of a volume button. This makes it difficult to control with the needed swish action with your finger to the side of the screen; it is however backed up with steering wheel controls. 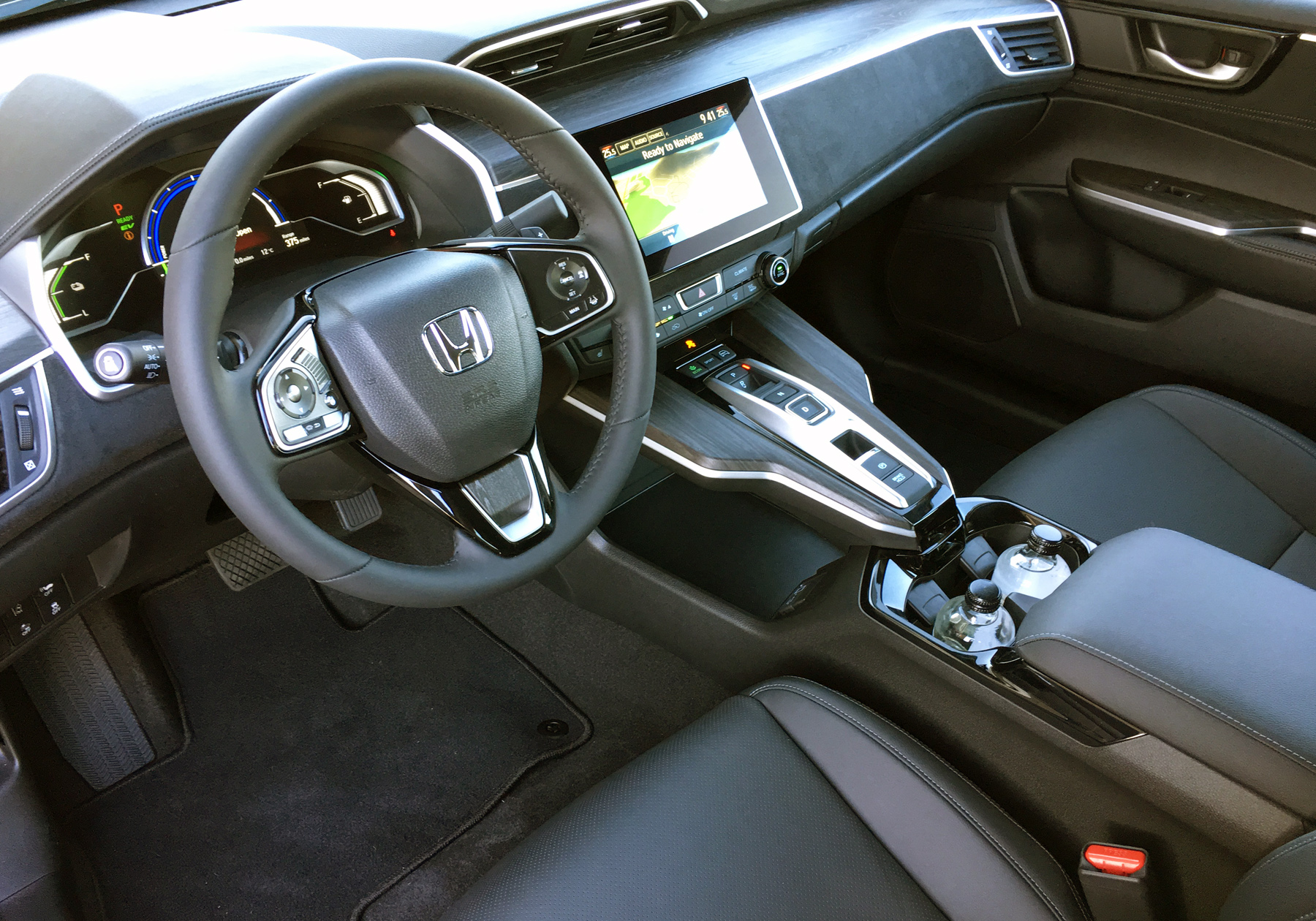 The fit and finish is excellent with a great choice of quality materials.

The front seats are comfortable while being supportive and the rear seat can easily accommodate three passengers giving ample leg and headroom.

Trunk space is at a premium with 439 litres, marginally less than gas powered Accord.

Handling was a surprise especially for a car that weighs a hefty 1,843 kg.

The Clarity is well mannered, with a smooth, comfortable ride; the added insulation has minimalized any road and wind noise making it quieter than I had anticipated.

The battery pack is mounted low and centered under the seating lowering its centre of gravity, this helps by reducing body roll especially when pushing it into bends and turns.

The electric motor is agile and pulls the car along without hindrance all the way through the mid range and beyond.

How the vehicle reacts to driver input is dependent on which one of its three drive modes selected, Econ, Sport and HV.

Econ as you would expect, is set up to maximise battery power and fuel efficiency in stop and go traffic. Sport mode adds a bit more vigour with the engine kicking in sooner allowing for harder acceleration.

HV mode prioritizes the gas engine and allows the regenerated power to be saved for future use or, when holding the button longer, will charge the battery directly. This is best used when on the highway and you want to regenerate enough power in preparation for heavy traffic after exiting.

As with most hybrid-electric vehicles regenerative braking plays a big roll with Clarity.

Two steering wheel mounted paddles allow the driver to remove their foot from the brake pedal and control how much regenerative braking is applied when lifting off the accelerator.

There are four different levels of braking each with a more aggressive slowing ability that can be controlled by the driver, however, unlike some of the competition the paddles will not bring the vehicle to a complete stop unlike other one-pedal drive systems.

Both come with blind-spot alert, adaptive cruise and lane-keep assist as standard, as are Apple CarPlay and Android auto.

The price may seem slightly high, but with the Ontario Government rebate of $14,000 makes it a really affordable alternative to any gasoline powered midsized sedan. 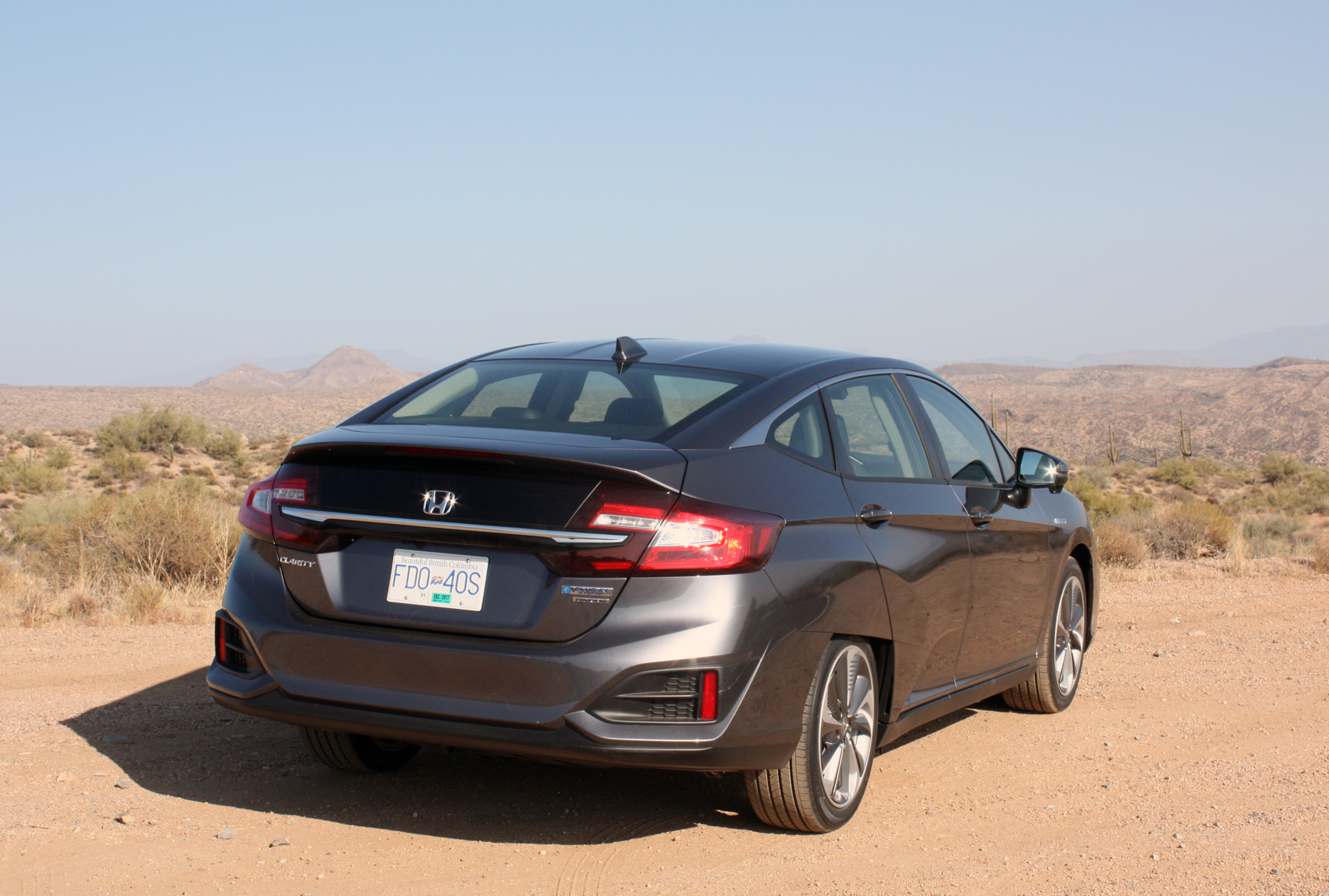 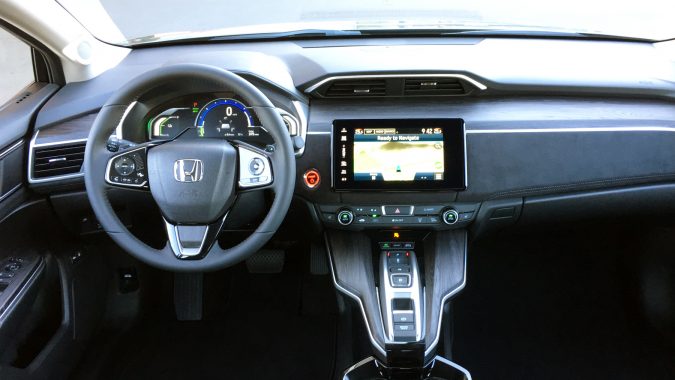 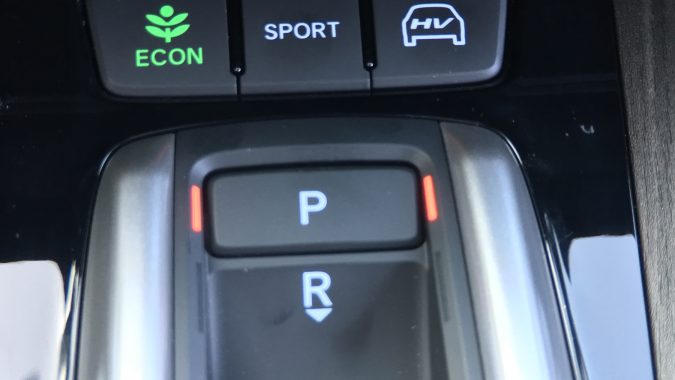 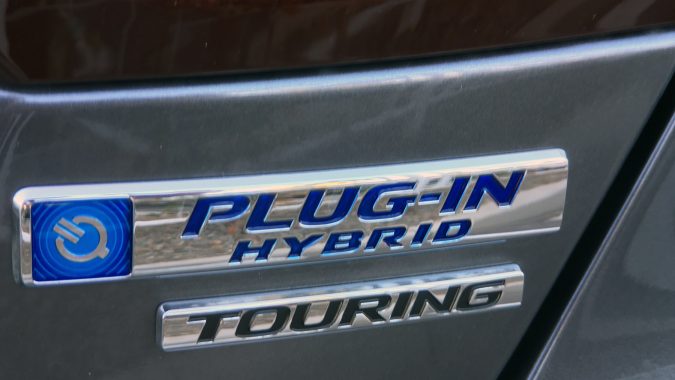 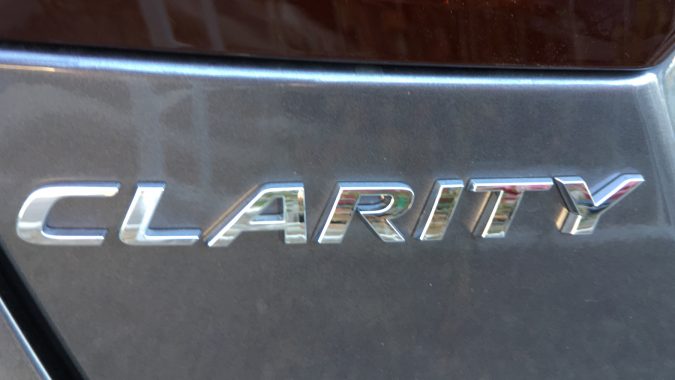 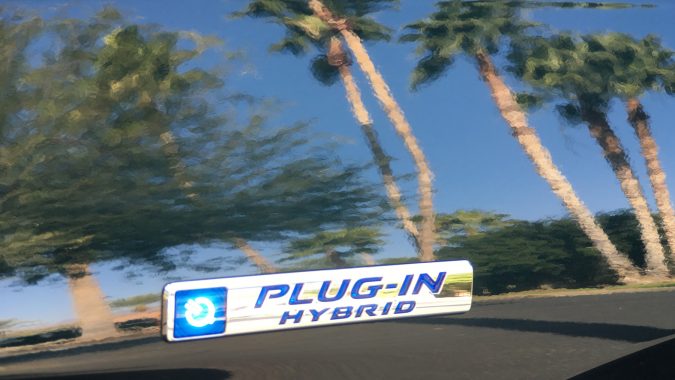 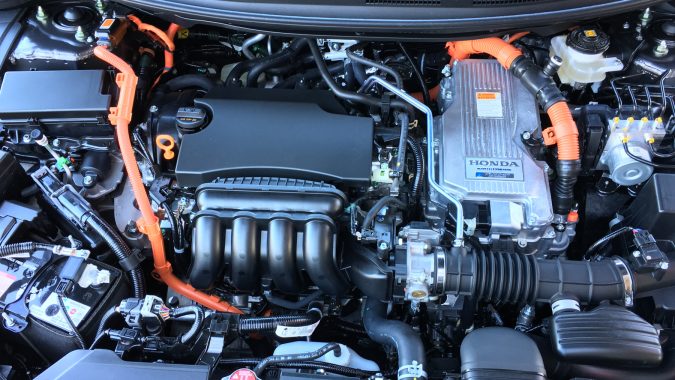 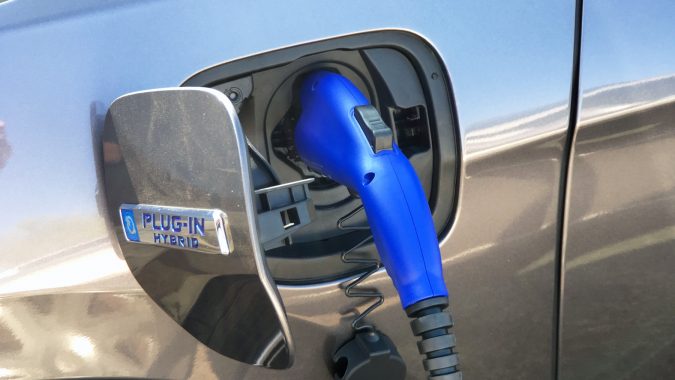 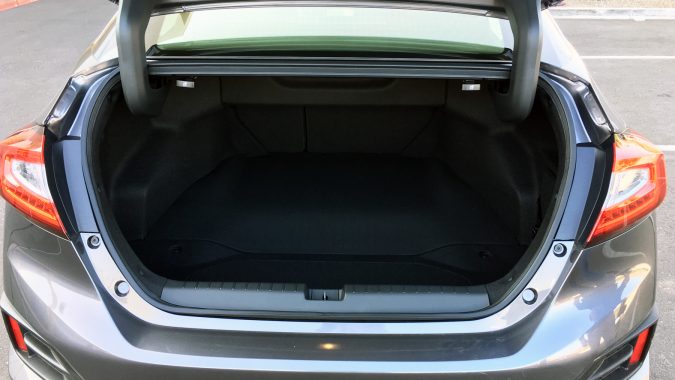