The Honda Civic has been the bestselling car in Canada since approximately the last ice age.

It has accomplished this impressive feat simply by doing a lot of things well.

The current generation, launched last year, is the 10th to bear the Civic label.

It is available as a four-door sedan, two-door notchback coupe, or, as of the 2017 model year, a hatchback, a welcome return to Civic’s roots, in a sense.

This, however, is a four-door hatch, not a two-door like the original. That body style returns later this year in the guise of the ultrahot Si. Can barely wait …

BTW, as I have said a million times, if you don’t normally go in and out of it, it’s not a door — there’s no such thing as a ‘five-door hatchback.’ 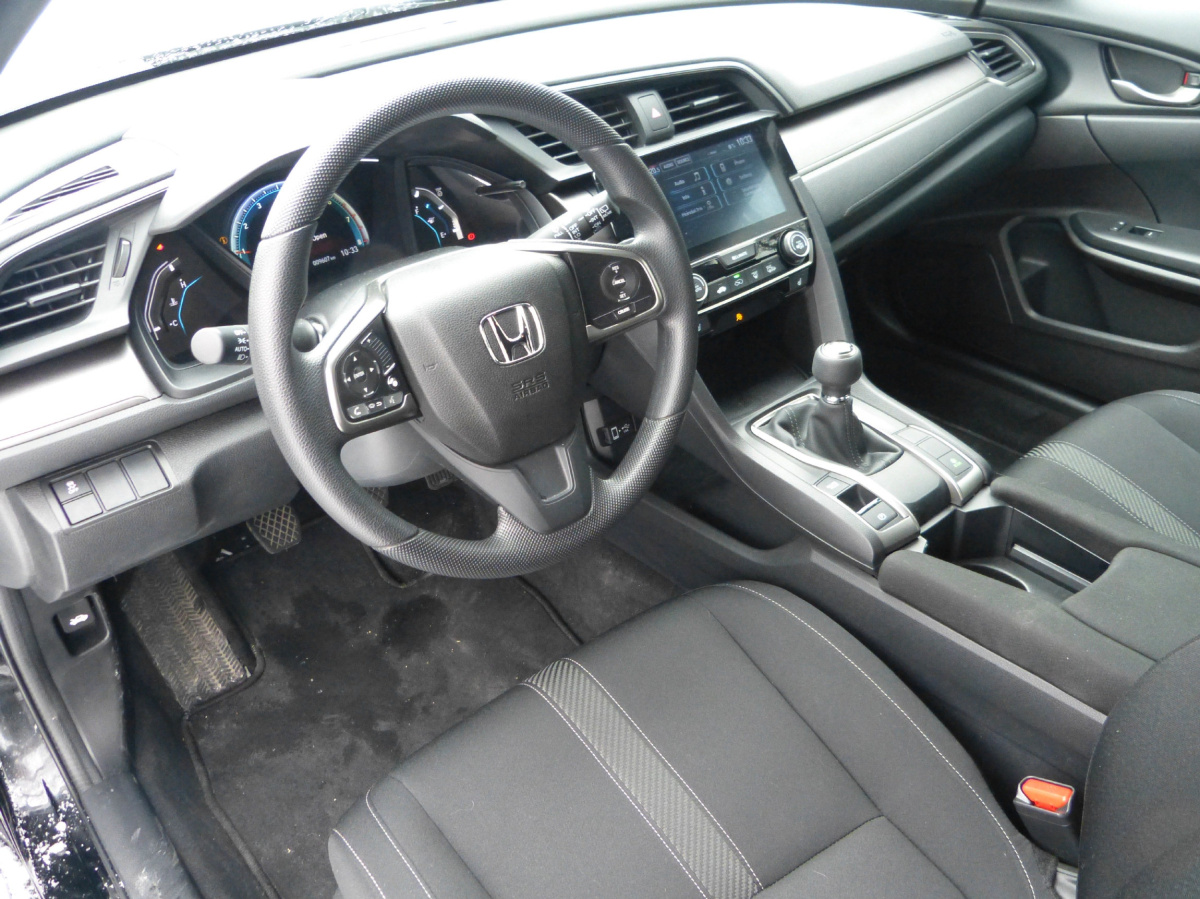 All Civic hatches (coupes, too) come with a 1.5-litre, four-cylinder turbocharged engine and the nearly-extinct manual transmission, a six-speed.

A Continuously Variable (CVT) automatic is available for you shiftless types. (The sedan offers an entry-level DX trim with a non-turbo engine and either transmission.)

In case you haven’t been in a Civic for a while, you may not have noticed how it has grown. It is now a full-fledged compact, bordering on mid-sized, with plenty of room for four, with five just a bit of a squeeze.

The hatchback is the most practical body style, especially for a compact car, allowing easy access to a spacious trunk.

One terrific aspect of recent Civic generations was the flat rear floor, which made its rear seat more accommodating than most.

I say ‘was’ because that has gone away with the new car. Honda talks about the increased rigidity of the new body despite reduced weight, so perhaps this longitudinal beam member was necessary to achieve the added strength.

It isn’t hugely intrusive, but the Toyota Corolla I tested a few weeks ago had copied the Civic’s flat floor, and still has it.

I found the Civic styling pleasing, with an assertive (‘aggressive’ seems a bit strong …) front end, and handsome flowing lines.

The rear hatch glass is split horizontally, sort of like the old CRX — the main slanted portion with the wiper, and a more vertical section below it. The bar between the two makes the view in the mirror a bit busy, but you soon get used to that.

My tester had black ‘pearl’ paint, somewhat sombre for my tastes. But this ain’t no Model T — you have a six other brighter colours to choose from. 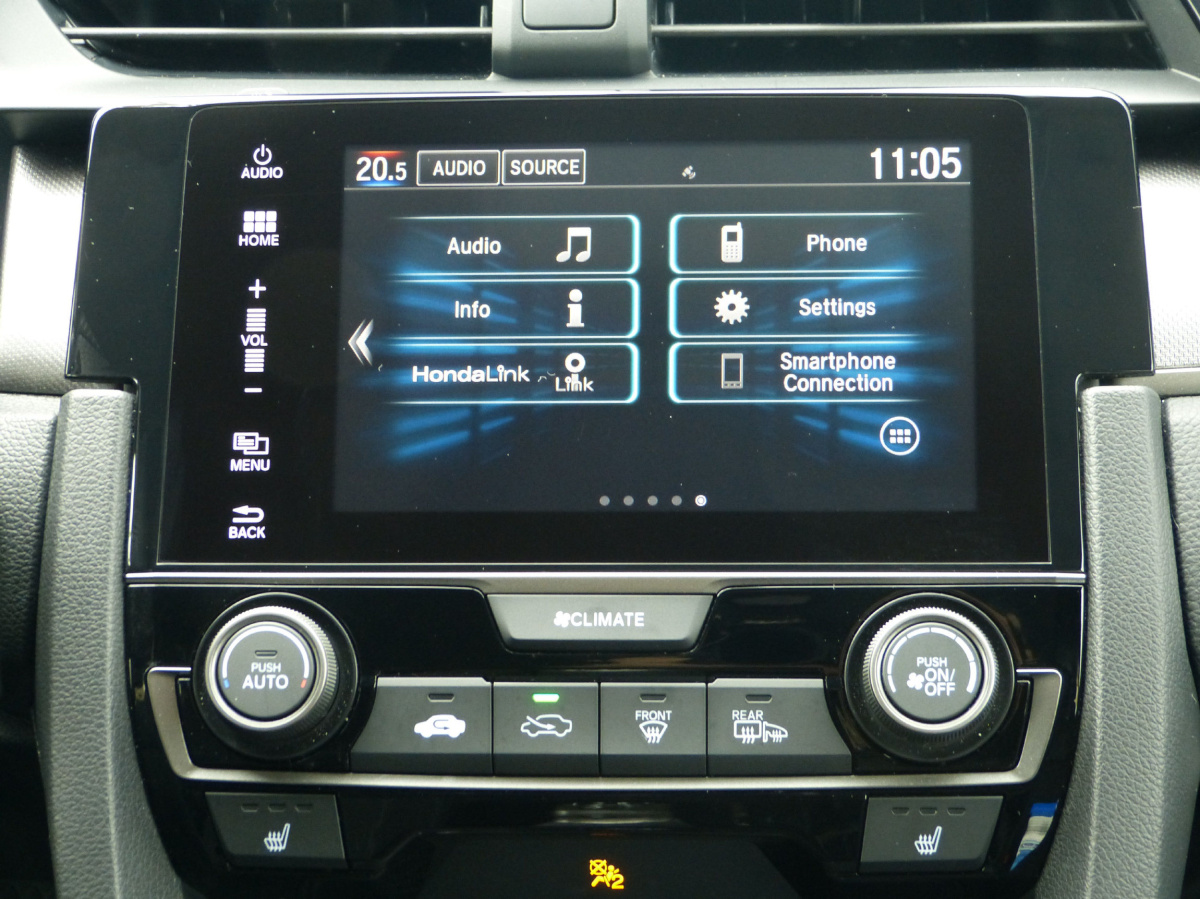 The interior will be black, though — they all are — with the much-preferred (by me, if no one else) fabric upholstery in LX and Sport trims, leather in the range-topping Sport Touring. The decor is a bit dull, but seemingly well-made.

The seat is height-adjustable; good job, because whoever drove my tester before me must have been one of those ‘tuner’ guys who like to sit on the floor. You want to be as high in the car as possible for your best view down the road.

A seven-inch touchscreen is standard. Honda’s used to be way worse than most because many of its ‘virtual’ buttons were so tiny, you simply couldn’t operate them at all, let alone safely. The tiny vertical ‘slider’ control for sound system volume, for example, is still ludicrous.

Perhaps Honda has had some feedback from customers, because there is a mechanical volume control on the steering wheel, and now the radio station pre-sets can be accessed without using a magnifying glass. I found the amount of force needed to operate these ‘buttons’ seemed to vary. Sometimes, a light touch even when wearing light driving gloves was all that was needed; sometimes, I had to hammer on the damned things. No idea why. Can’t wait until someone invents a push button that you can actually feel working without having to look at it. No, wait; they already have …

The system is compatible with Apple CarPlay and Android Auto, if you are. My LX tester even had a real ignition key, so I always knew exactly where it was.

Honda was originally an engine maker, and engines remain one of their strengths. (OK, so the current Formula One engine remains a work-in-progress …).

I only mention this because you don’t often see this degree of variation between different trims and transmissions.

When I first drove the car, it felt distinctly sluggish, until I noticed the ‘ECO’ button — yeah, a proper button! — was pushed. This remaps the engine to save fuel, a noble goal and all, but without it and taking fullest advantage of the available performance, I still averaged 6.7 litres per 100 km, which is darned good, especially in winter.

You’d be hard-pressed to know it’s a turbo unless you read the badge on the back, because power delivery is linear, and throttle response even at fairly low r.p.m. on the highway is very good.

Manual gearboxes are another traditional Honda strong point, and this one is no exception — light, quick, direct. Clutch take-up maybe is not as good as the best (that would still be Volkswagen) but it is decent. 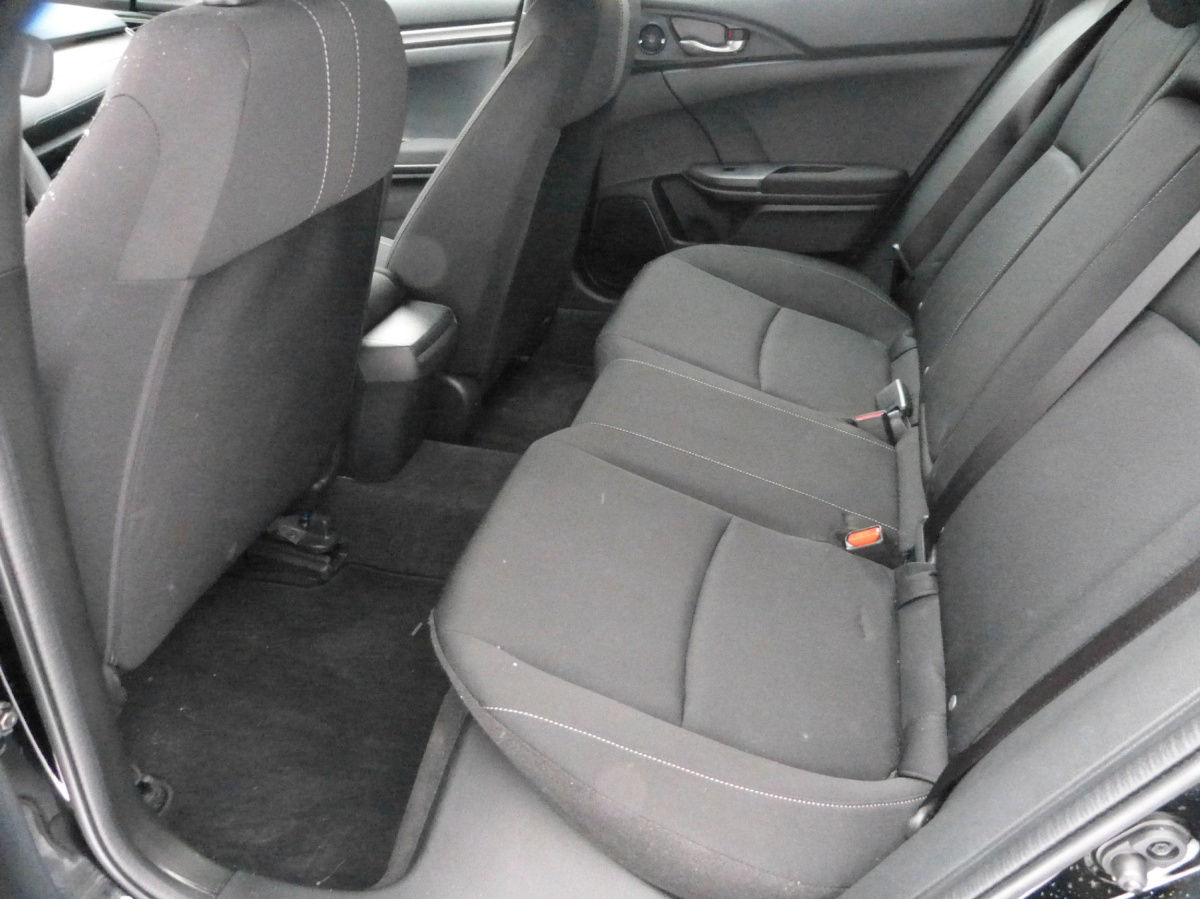 The strut front and multi-link rear suspensions and variable ratio power steering make the car both easy and fun to drive briskly.

Ride is reassuringly firm; not cushy, but not harsh either.

Again, like most carmakers, Civic has gone to an electric parking brake which is (as always) a disaster because it takes away one more control that experienced drivers can use to their advantage, while delivering no added benefit.

Speaking of dumb things most carmakers do, the Civic beeps at you if you leave your lights on when you switch the car off. Well, duh; if the car is smart enough to know the lights are on, it’s smart enough to shut them off.

Car on, lights on. Car off, lights off. How hard is that?

Some carmakers — Porsche and Mini, in recent experience — get this right. Buy the car; turn on the headlight switch; never touch that control again. Come on, Honda; think about it.

One good thing Honda has adopted from elsewhere is the capless fuel tank, a feature initially seen in Chrysler products who I guess bought it from the supplier with a couple years’ exclusivity. This is a genuine forehead-slapper — why didn’t I think of this? A nice detail.

One other detail I wish they’d adopt — a little dam running up the side of the windshield to stop washer fluid overspray from leaking onto the side window, rendering it nearly opaque.

At least some Toyotas used to have this; Honda and everyone else, please copy.

Civic should also copy cars such as Hyundai Elantra and Kia Forte and offer a heated steering wheel. Surely for a car built for Canada, this is a must. (Note that unlike most of our Civic models which are built in Alliston, the hatch is assembled in the United Kingdom.)

Features like lane departure and forward collision warning are available on LX, but only if you choose the ‘HondaSensing’ option with the CVT.

Now, I personally don’t care about this stuff, but a lot of people do. Toyota Corolla makes a lot of these systems standard on all trims, so Honda has to up its game here.

The new-generation Civic retains terrific performance, a fun-to-drive character, an excellent reputation for reliability and a strong loyal customer base.

So, while it probably has no fear of being supplanted from its number one position, the competition is nipping at its heels with respect to certain features and details.

And isn’t it strong competition that helps make us all better? 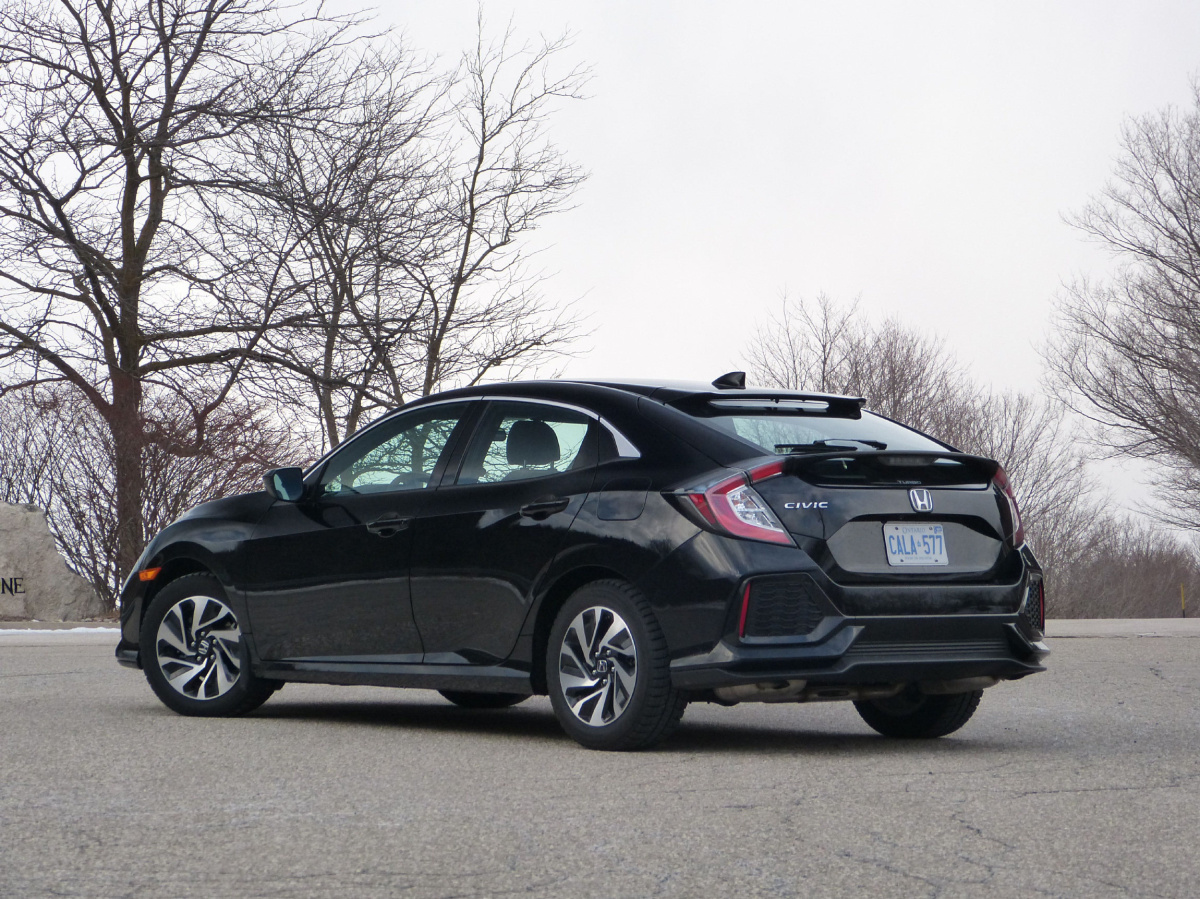