Honda is renewing a favourite two-wheeled theme with the CRF1000L Africa Twin, a modern version of a legendary adventure bike.

Which sounds a little pretentious, but with new production versions of everything from the HA-420 executive jet to the new NSX supercar, new FCV (fuel cell vehicle) and new Ridgeline pickup truck, to name just a few of the recent debuts, it’s easy to see why they’re getting so cocky.

And along with all of those brand new products, Honda is also renewing a favourite two-wheeled theme with the CRF1000L Africa Twin, a modern version of a legendary adventure bike.

The company first developed the original NXR750V off-road racer to compete in Paris-Dakar Rallies and the resulting bike took four consecutive wins over the course of the late 1980’s.

A street-legal, mass production XRV650 was upgraded quickly to the XRV750 Africa Twin that debuted as a 1990 model, boasting a 742 cc V-twin engine and most of the rally bike’s off-road abilities and it served as the adventure class flagship for the brand until 2003.

There were some diehard fans who imported a few of those early Africa Twins but, while the original was never officially marketed here, Canadians will finally have access to its successor, the all-new 2016 CRF1000L Africa Twin. 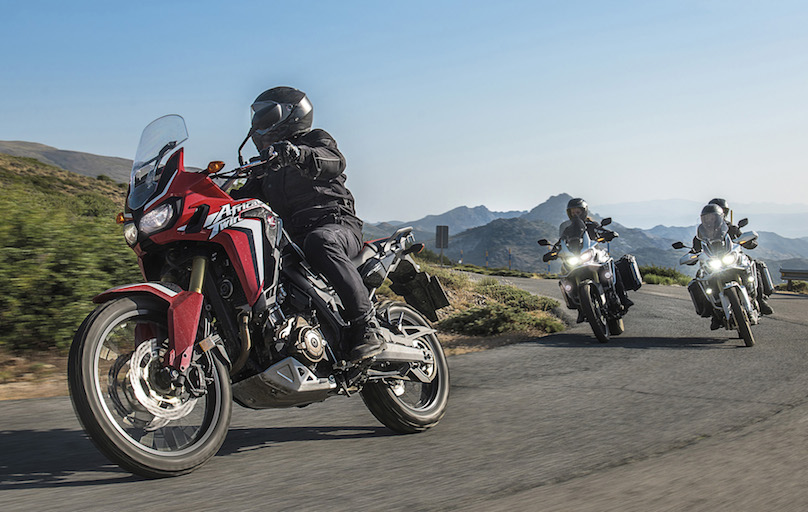 The new motorcycle expands on the original formula with an adventure bike design based on a “go anywhere” theme.

The Africa Twin starts with a high tensile strength frame that takes design cues from the CRF450 Rally bike. The frame components are steel, designed for sturdy simplicity and easy welding repair should a rider do some damage in the middle of nowhere.

And the rugged chassis supports a 998 cc eight-valve Parallel Twin engine that combines compact design and added power. That compact design allows for better mass centralization with the some of the heavier components – battery, ABS modulator and ECU – moved to the rear for a lower centre of gravity. Balancer weights smooth the power delivery but a 270-degree crank layout allows for a little of the engine pulse and feeling of a V-twin.

We had a small, intimate Canadian reveal of the bike before Christmas. And while we didn’t get to start up or ride the bikes around the hotel conference room, the Honda guys assured us that the parallel twin engine not only provides strong, linear acceleration but also a good, distinctive growl of power. Honda doesn’t release power ratings in North America but Euro-spec tests have returned numbers averaging 94 hp and 72 lb/ft of torque. 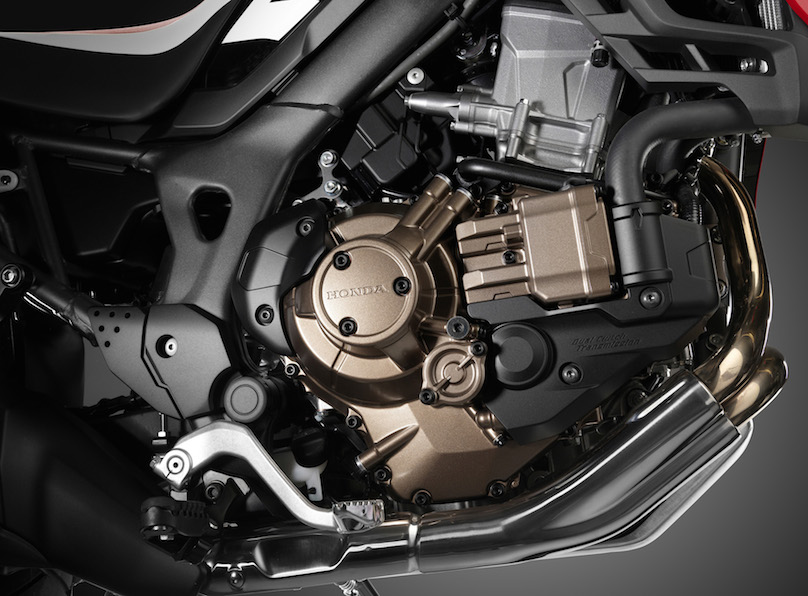 And along with the new engine, this latest version of the Africa Twin boasts a long list of innovations with 32 patents pending, along with technologies that include:

And although there were no riding opportunities, we were, however, able to poke, prod and climb aboard the Africa Twin to check out the tall bike dimensions, actually a little bigger and heavier than the original.

Real off-road riding requires a stand-up position, encouraged by a wide rear seat that tapers to a narrow joining at the slim-lined fuel tank and by a cockpit and gauge cluster that has been pushed forward for optimal viewing from either a seated or standing position.

The 18.8-litre fuel tank is not quite as big as the 23-25 litre tanks of the original models but Honda is promising a near 400 km driving range.

Honda’s adventure class of motorcycles already boasts the CB500X, NC750X and the new VFR1200X, all-rounders that combine varying degrees of travel and touring abilities with at least some back road capabilities.

But for serious adventure riders looking to blend ultimate legacy of go-anywhere ability with new levels of toughness and technology, the 2016 CRF1000L Africa Twin will come to Canada this spring as a viable contender and the new flagship of Honda’s adventure class.