The Miata, now officially called the MX-5 has been—and still is—one of my favorite cars. Numerous awards, updates and design changes and this little car just keeps getting better.

The Miata, now officially called the MX-5 has been—and still is—one of my favorite cars. Numerous awards, updates and design changes and this little car just keeps getting better. 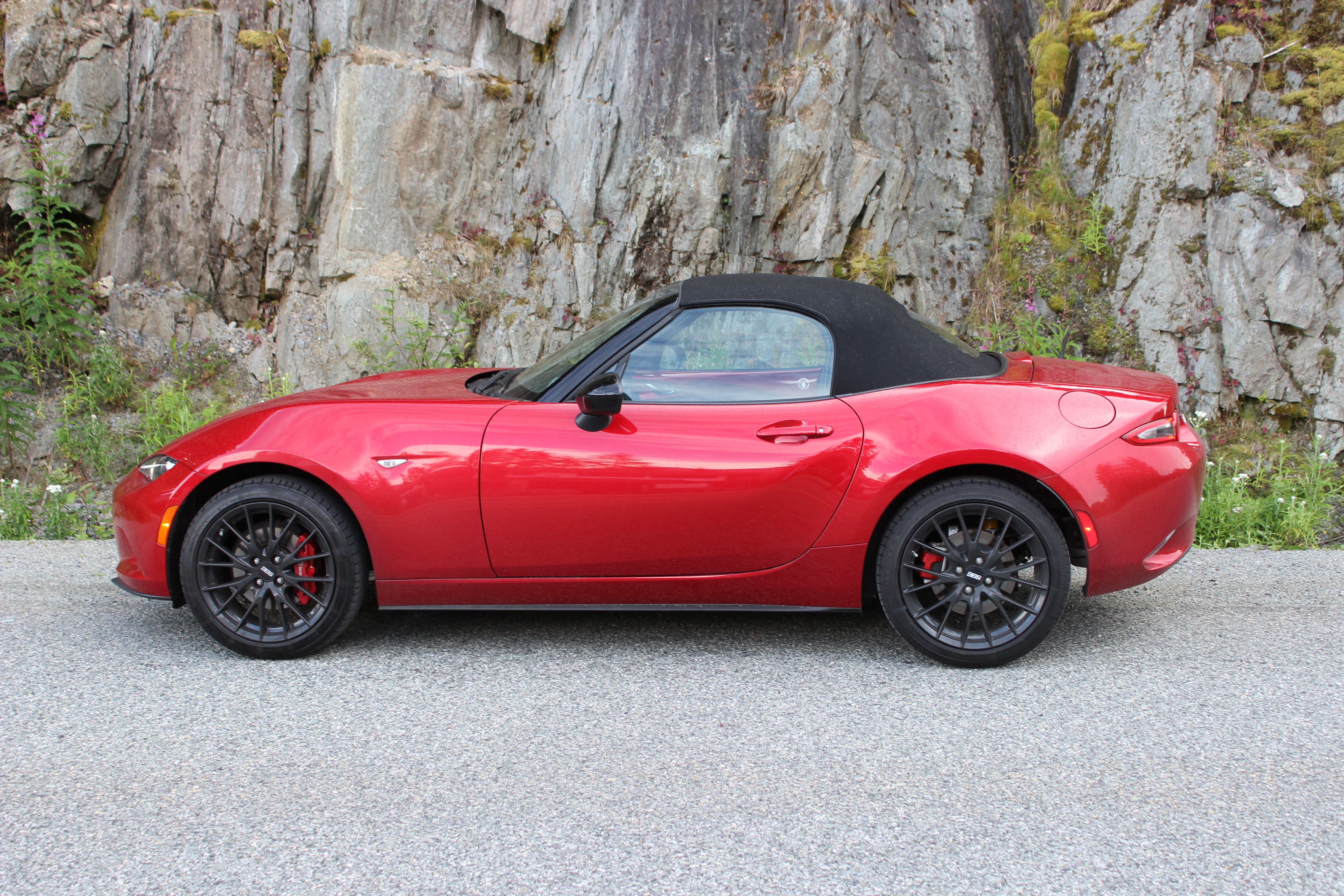 Lacey Elliott: Years ago, I think the most common phrase to describe this car was cute. 25 years and four generations later, Mazda has, in my opinion, really hit the nail on the head. The rounded front fenders are gone and the LED headlights now look like they are squinting. They appear to be looking ahead to pounce on anything in the MX-5’s path. Mazda’s Kodo design has transformed this car and it looks substantially different than Miatas of the past.  I was always attracted to this tiny car because it was so darn cute, but no more. It is still petite, but now it turns heads because it is an aggressive looking little sports car. 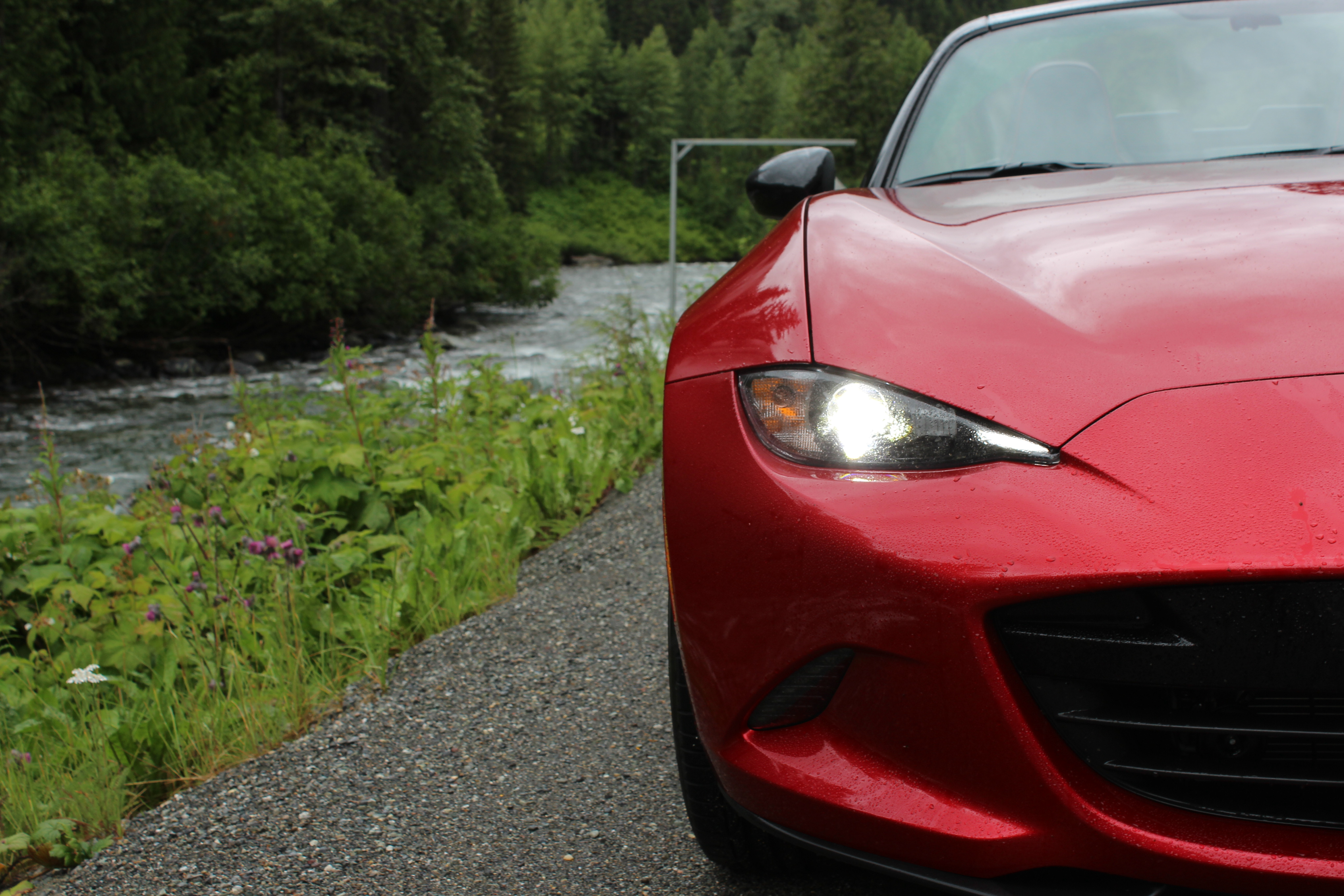 Dan Heyman: I don’t know if Mazda had some premonition that Pokémon Go was going to be as big a thing as it has been, but I know I wouldn’t be surprised if I saw a mini MX-5 peeking out from behind my couch on my Phone screen. Actually, I would be, but that’s only because I don’t play the game.

Still, though; unlike what Lacey said, I think those narrow headlights and smiling grille opening actually lean a little more to the cute side than previous, when the massive grille opening looked more like something from a boardwalk side show.

The view from the rear is an altogether different proposition, however. The narrow taillight lenses – while a little Jaguar F-Type-esque – and upswept bumper provide an athletic rear fascia, while the black 17” BBS wheels (17s! on a Miata!) and red Brembo brake calipers seen on the car here do their part without looking too aftermarket gimmicky. Those features, along with the Recaro bucket seats inside, are part of the GS Sport package, which is new for this year. While the MX-5 is ideal in drop-top conditions, I’m actually a fan of how the car looks with the easy-to-deploy manual soft top up, almost like a Lotus Elan has been transported to the 21st century.

You may also like: Mazda MX-5 RF 2017 production begins 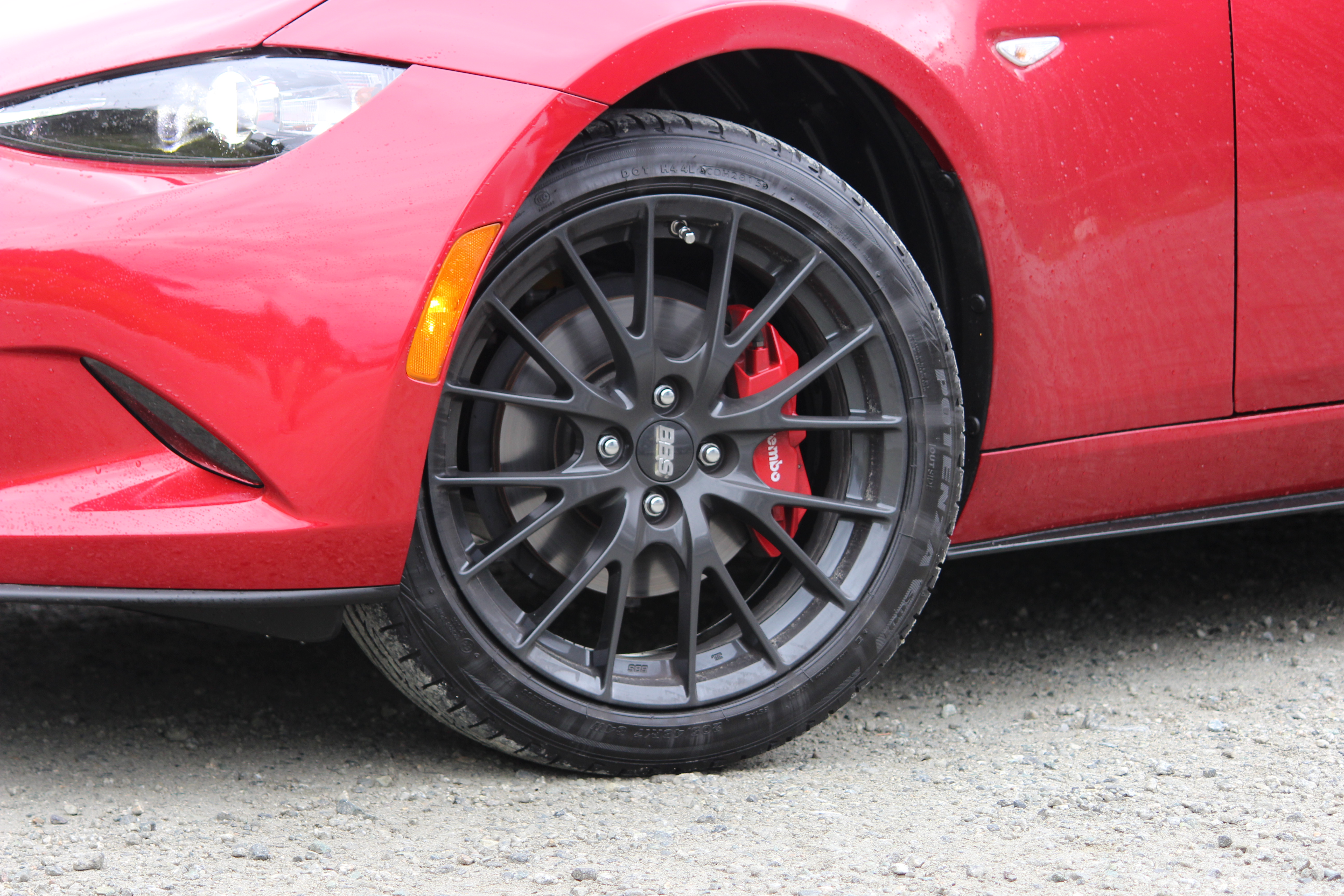 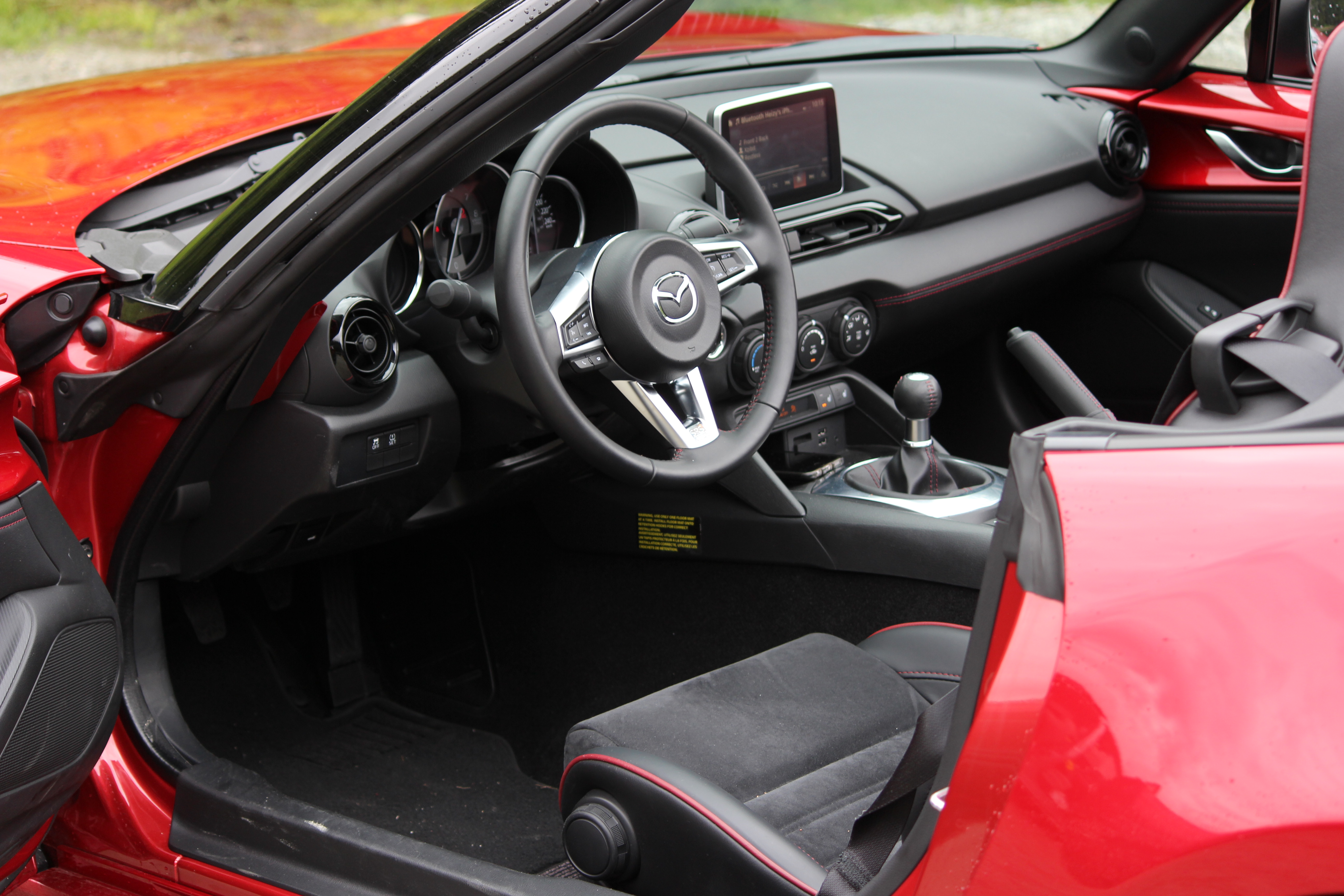 LE: It is a small 2-seater convertible; so space is not the reason you will buy this car.  Improved ergonomics and the fact that the seat can recline a little bit more has made this generation feel roomier than the previous model.  Sitting behind the wheel everything is in the perfect position to make driving comfortable.  The gearshift sits effortlessly in my hand and the pedals are perfectly aligned for my feet.  The bolsters are wide enough for me but I do wonder how Dan will feel. The soft top can be opened with just one hand, either from the driver or the passenger side with ease.  The sound system allows music to be heard easily whether the top is up or down.  It is a simple car; nothing inside is over complicated. 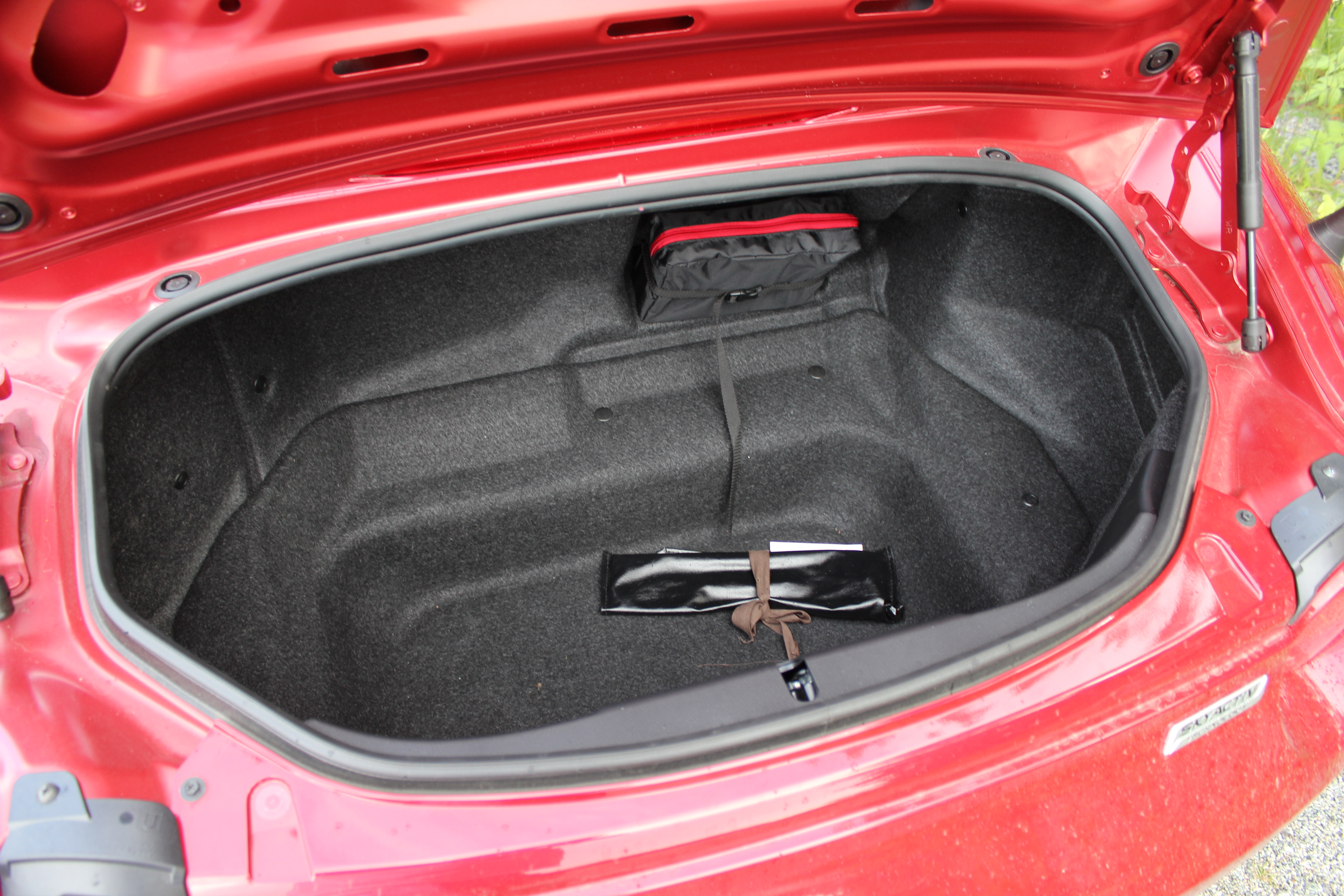 DH: It’s not big, that’s for sure. But you knew that. The real question, of course, is whether or not the taller folk among us (6’3” folks like myself, for example) are able to participate in the fun that is the MX-5.

The short answer is: yes. Absolutely they can. It will take a little adjustment and you have to be careful on how you spec your particular MX-5. For example: the Sport Package adds thicker Recaro seats, and as much as I hate to admit it, Lacey’s right; my more generous hips are squeezed too tightly to make long journeys comfortable. The thicker seat cushion also means your head ends up sitting closer to the top when up. No baseball hats, then, and the situation is made no better by the fact that you have to set the seatback to a more vertical position in order to provide more legroom due to its thickness. Stick with the regular seats, which are still plenty supportive and allow you to sit deeper in the car.

Other than that, though, I found the MX-5 to be perfectly usable. The snug confines provide the added bonus of ensuring that all the controls are close at hand, no matter your size. Trunk’s only good for a weekend duffel, but there are small basket-like storage bins behind the seats. Also good thanks to the cockpit’s snugness is the ability to close the manual soft top while sitting in the car. 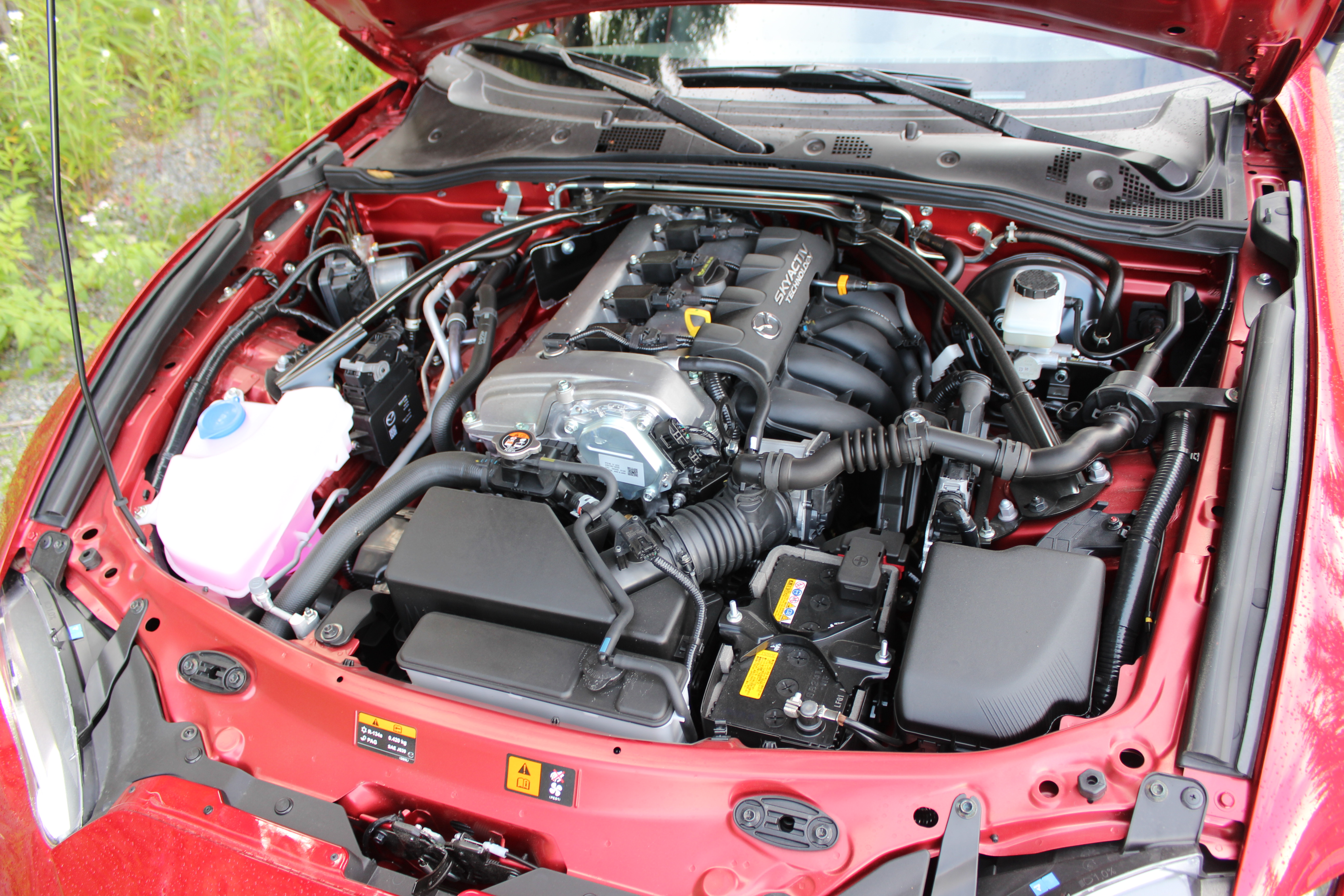 LE: The 2.0Litre  4-cylinder engine puts out 155 hp and 148 lb-ft of torque . You don’t have to know what any of that means because it won’t matter one bit when you’re behind the wheel. It actually has less power then the previous model but with some mechanical changes the driver gets more useable power more of the time. The engine sits a bit lower and farther to the back of the engine bay to improve the center of gravity.  This generation has more high-strength steel added to the structure to improve safety and also reduce weight by about 10%. It feels peppy, and powerful and it puts a smile on my face in every driving scenario. 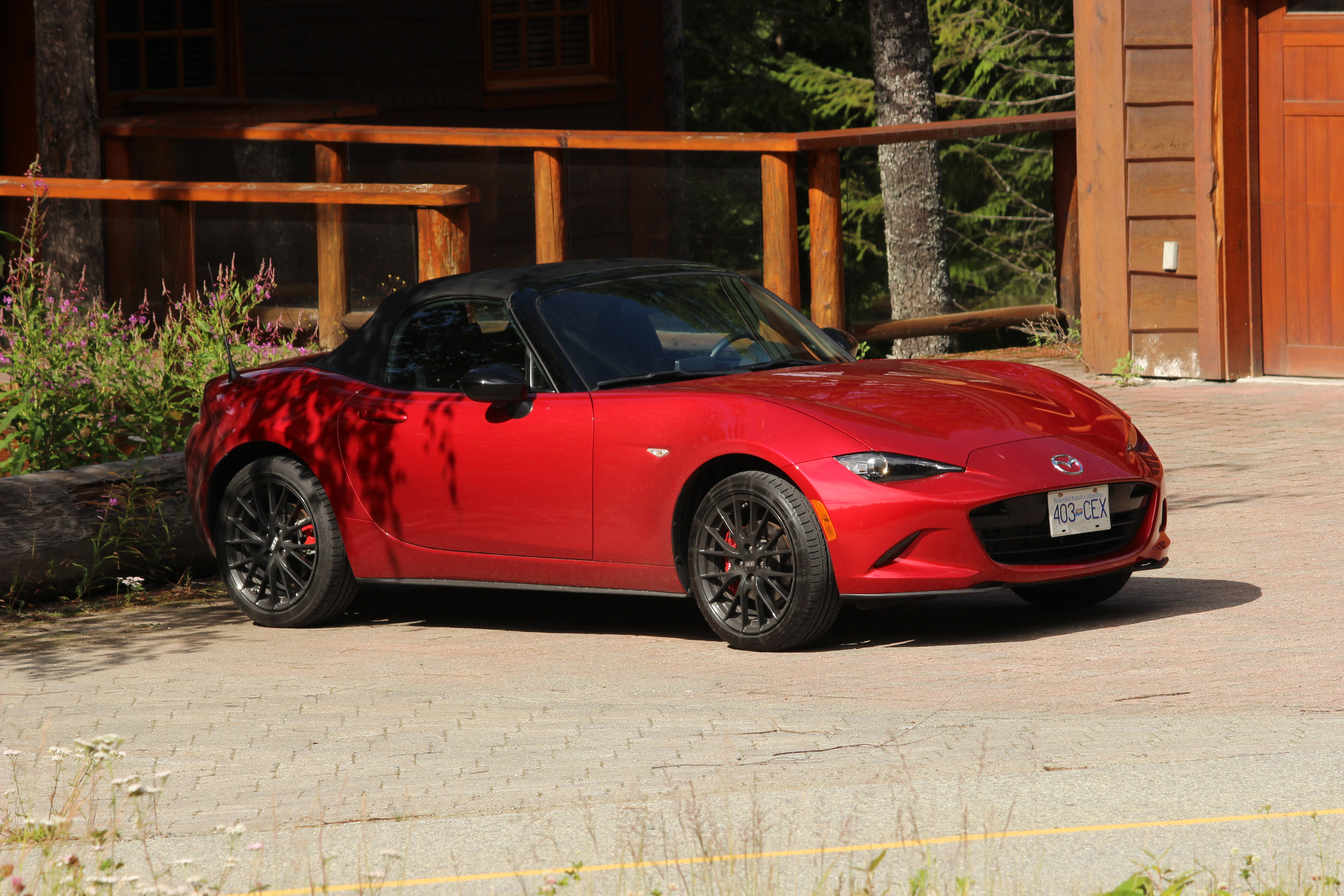 DH: Let’s face it; you’ve come to an MX-5 because of how it drives, right? Well, with the 2016 model, you’ve come to the right place. Power is ample when all you’re hauling around is 1,058 kilos of weight. Plus the passengers, of course, which matter when you’re this low on the scale in the first place.

Being a naturally-aspirated powerplant, I agree 100% with Lacey’s use of the word “peppy” to describe the feeling once you plant your right foot; power is immediate, not bogged down by needing to spool a turbocharger, and the six-speed ‘box and the engine are so in tune, that it’s just a car that feels right when you start to push it.

The transmission is the real gem when it comes to the powertrain; I found myself making excuses to shift gears just so I could feel its linkage at work. They offer an automatic in this car, but just as it’s always been with the Miata/MX-5: an auto? Really?

While the gear linkage is a highlight of the powertrain, it’s a little harder to determine which single element wins out in the chassis department. That’s not because nothing stands out; it’s the exact opposite, in fact. Put simply, it’s because everything is so durn good.

The addition of more high strength steel – as Lacey mentioned — is big; more chassis stiffness, more safety, but less weight. In practice, it’s tight as a drum, allowing for the fantastically direct (albeit electronically assisted for the first time; it appears even the purest driver’s cars aren’t immune to this trend) steering to do its thing and point you exactly where you wanted to go, as if it was tuned directly into your synapses.

Body roll – and this should come as no surprise – is almost non-existent, which is good in practice, but paired with the sticky rubber may almost be too good. Every so often in a car like this, you want to hang the tail out, you know? The chassis is just too much for the engine in this case.

I guess if I were to ask for one thing, it would be the option of turbocharging the engine. The second generation NB MX-5 received a turbo’d Mazdaspeed model, and it remains a collectible icon today. Further, the current MX-5’s Fiat 124 cousin gets a turbo motor as standard, so the tech is there. In due time, perhaps. 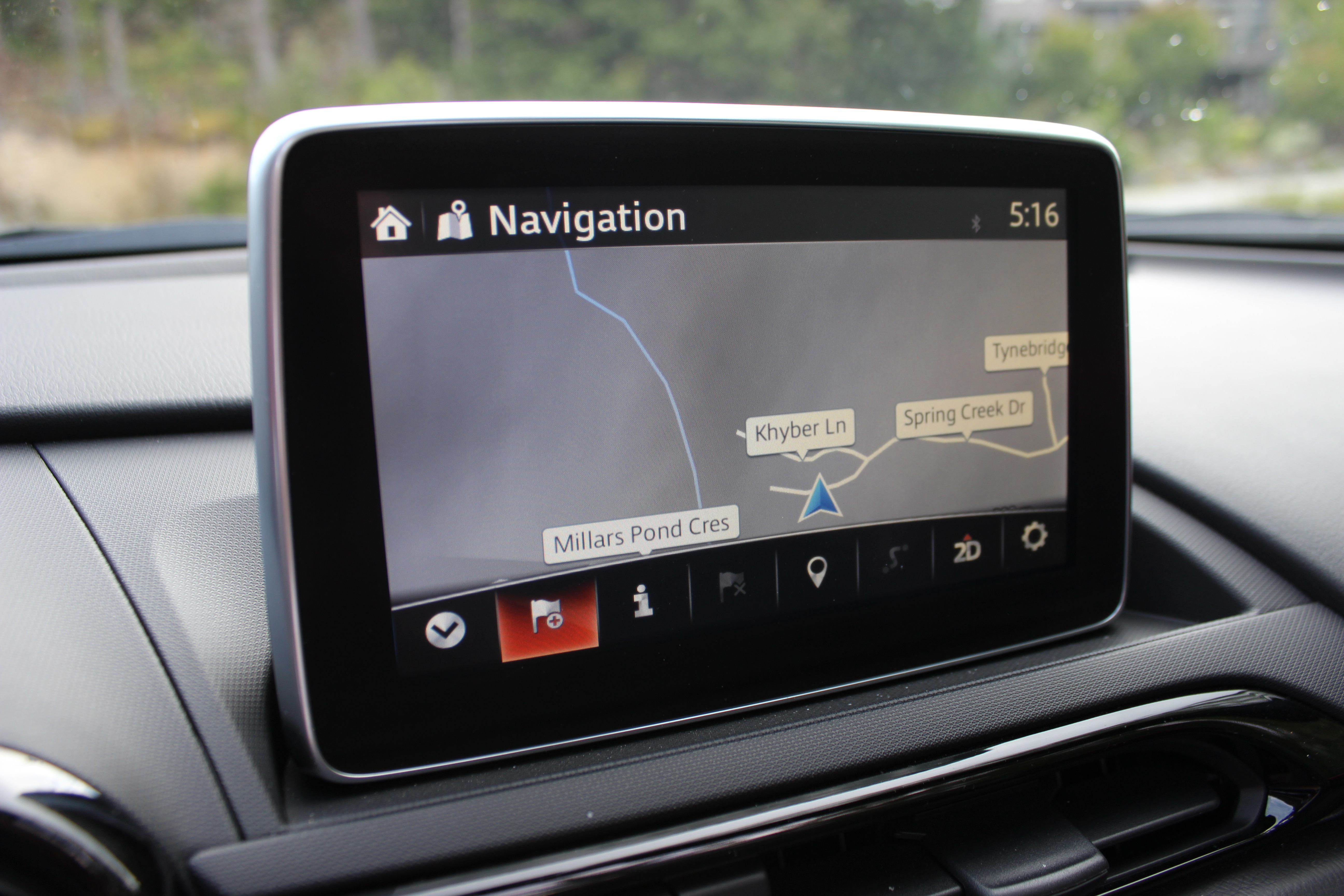 LE: If it ain’t broke, don’t fix it. I love that for the last 25 years Mazda has not over-complicated anything on this car. The base GX starts at just over $33,000 and has cruise control, Bluetooth, MP3 capability and push button start. For close to $41,000 the GS model upgrades to 17” high-luster gunmetal finish alloy wheels, piano black accents, adjustable heated leather seats and Bose premium audio system. 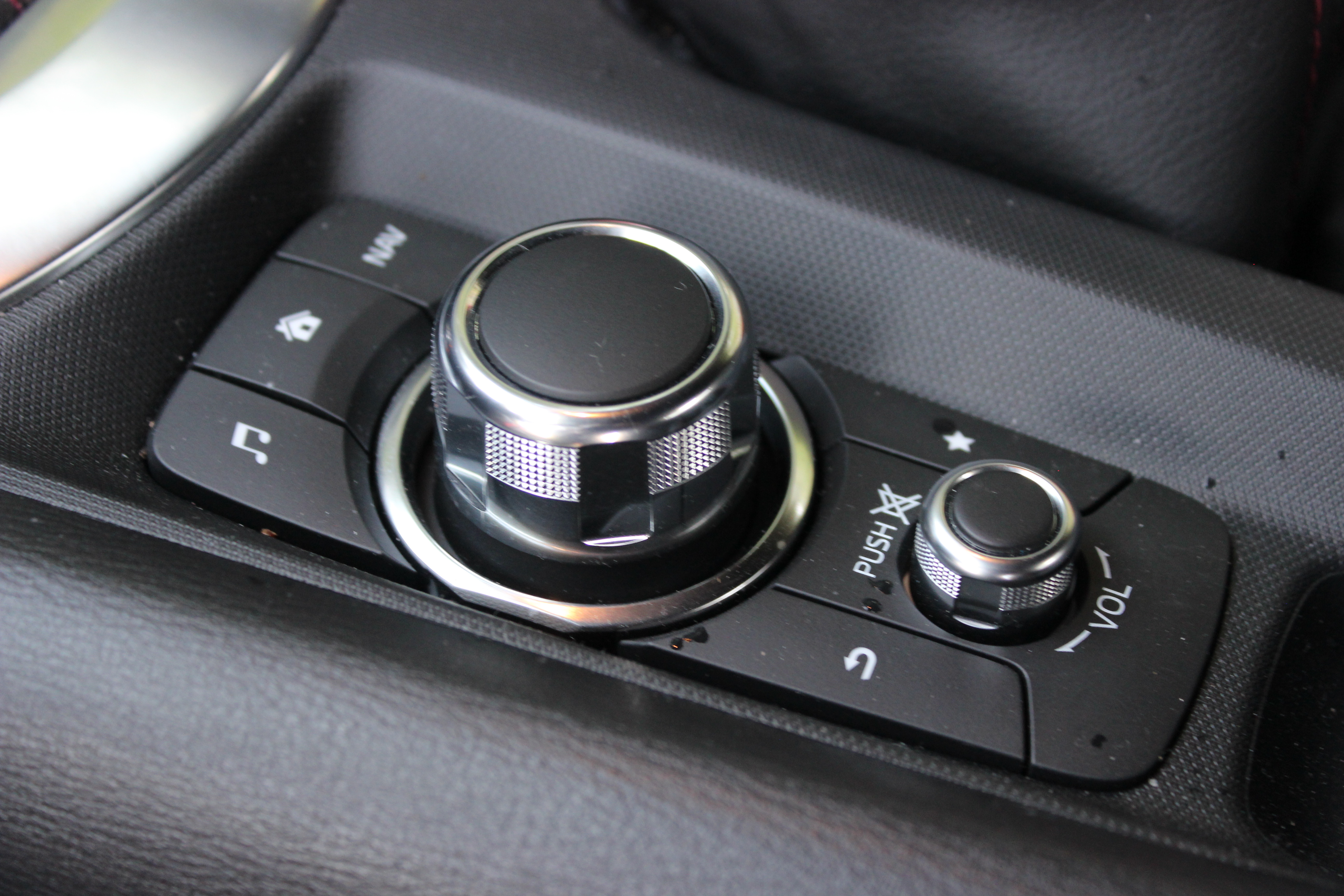 DH: What? Technology? In a rear-wheel drive, manual-transmission soft-top roadster that still calls classic vehicles like the Lotus Elan and MGB its ancestors? Whatever are you talking about, man?!?!!?

OK, OK, enough of that. The ND is of course the most tech-centric MX-5 ever – such is the power of progress, after all – and I can live with that, as long as it doesn’t affect the drive with overly-invasive traction control and so forth.

Good, then, that all that stuff that Lacey describes doesn’t detract from the experience at all; not…one…bit. In reality, it’s just great to have the stuff and if that means more people will buy it, compelling Mazda to keep building the car, then I’m all for it.

LE: For under $45,000 there is nothing out there that comes close to this car. Sure you could get into a Porsche Boxster, but the price will almost double. It is incredibly good looking and an absolute blast to drive.  I have no doubt that this latest MX-5 will continue to be the best-selling sports car of all time.

DH: When it comes to affordable driving fun, it just doesn’t get any better. Many have come and gone – Honda, VW, even BMW – in an effort to mimic what the MX-5 can provide to North Americans, and while the MX-5 continues to soldier on in this, its fourth generation, that competition has all gone by the wayside. Just like its forebears, the 2016 MX-5 doesn’t disappoint, and we’re eternally grateful that Mazda continues to build it. 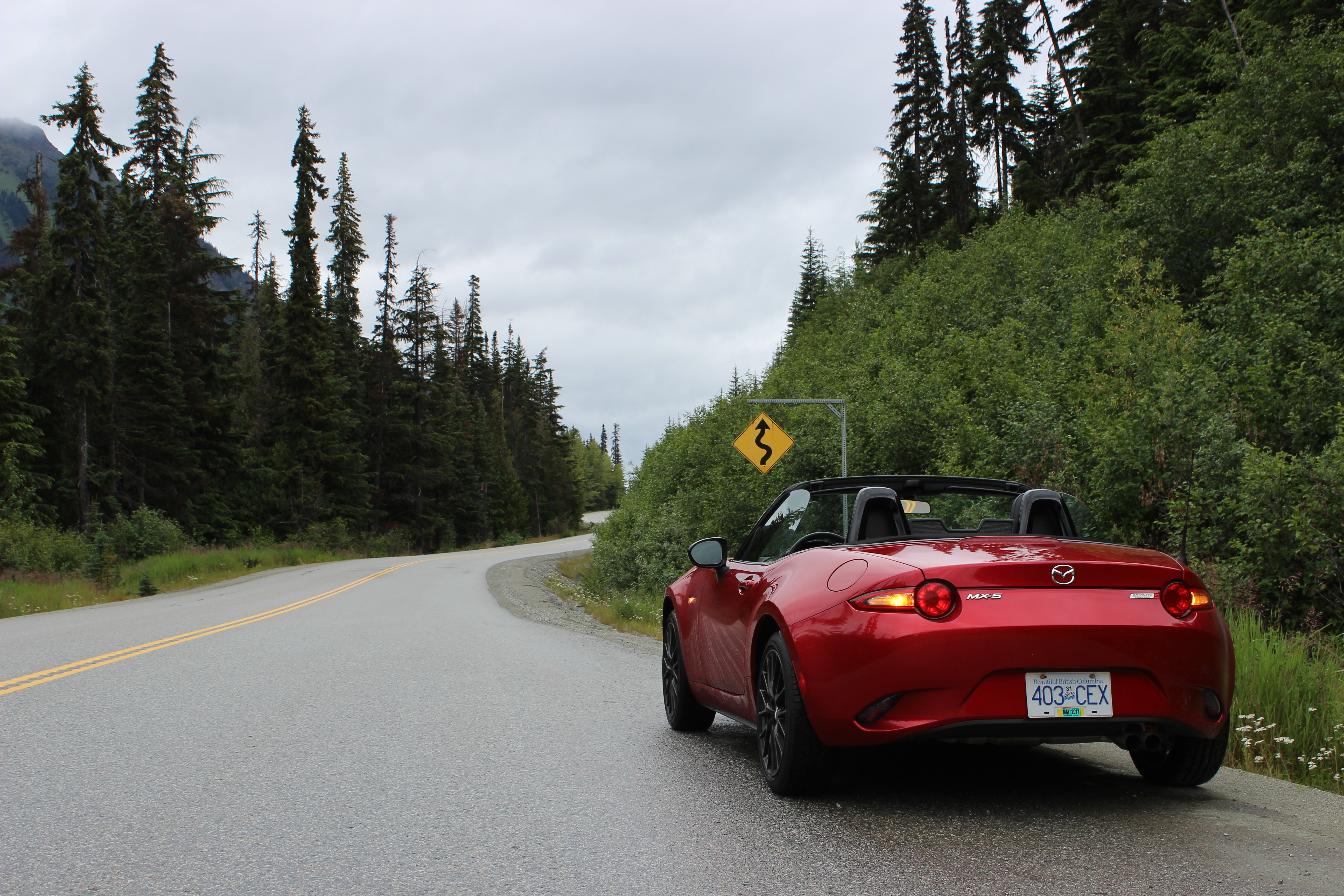 Maybe it’s Time for a Psychological Test for Dr