Fiat’s 124 Spider is made in a Mazda plant in Hiroshima, on the same assembly line as the MX-5, sharing the same platform and unibody structure. The Fiat has a zippy 1.4L turbo 4 cylinder with extra torque that sets it apart.

Lacey Elliott: My first car crush was with a British Racing Green Mazda Miata, renamed the MX-5 (Though it will always be a Miata to me).  When it comes to the price and how well it performs, others have tried to compete, but no one can come close. Is the 2017 Fiat 124 Spider going to be the one to finally out do it?

Dan Heyman: Well, Lacey, it certainly hasn’t it? Of course, having said that: if Mazda/Fiat hadn’t made such a fuss about the fact both the current MX-5 and Fiat share a platform in the days and months leading up to the release, you may not know it. The styling is one thing, but as popular as platform sharing is these days in the auto world (well, these days and days past, really), no one really thought one of the most iconic cars of all time – the Miata/MX-5/whatever – was going to share the spotlight with another car, right? I mean, GM having about 2.5 billion variations of the 1997-2005 U-body minivans is one thing, but a bespoke, low-number, RWD sports car? Really? I dunno… 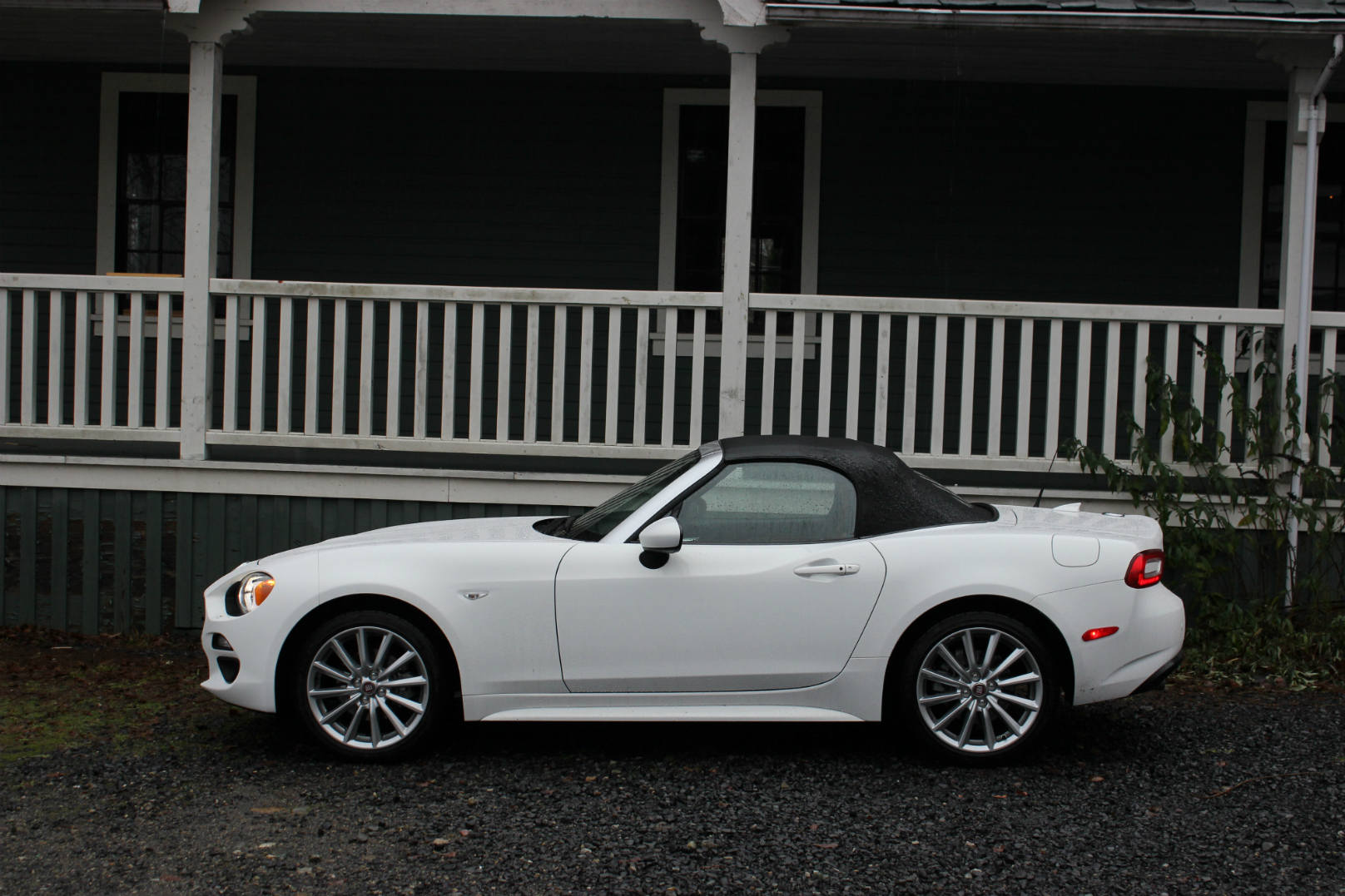 LE: As Dan mentioned: This Fiat is basically the Miata’s Italian cousin. From a distance, most people have no ideas that this handsome roadster is NOT a Miata. Interestingly enough, this is what they liked the most about it. Something more unique, something just a bit different.

The Fiat has a longer nose and more rear overhang. The headlight cutouts, grille shape and hood contours take their design cues from the original 124 Spider.

The interior of both these roadsters are pretty much identical. The layout of the cockpit, the buttons and controls as well as the infotainment system are the same. It looks simple and modern. Three big dials to work the air temperature and flow.  All information is displayed on a screen that stands up in the center of the dash.  I am not a fan.  It looks like more of an after thought and doesn’t flow with the rest of the layout. Maybe if you could push a button and stow it away when not in use I would like it better?

The ergonomic design allows easy operation of the steering wheel controls, pedals and shifter.  Every thing has been placed with the comfort of the driver in mind.  I am pretty average size and am curious to see if it has the same level of comfort for Dan.

Climbing in and out of this car is not the easiest since it does sit so low to the ground. Once seated, though, the bolsters provide great support and comfort.

The small trunk and lack of a glove box is not an issue for me.  My boyfriend has an SUV when we need more space. I could see this being an issue if the Spider was your only car.  I was a bit worried when I took an impromptu trip to Costco, but was surprised at what would fit in this little trunk.

The awkward location of the cup holders did cause some issues for my morning latte and the large water bottle that I always carry around. The holder in the arm rest is too far back to reach easily while driving. The second cup holder is by the passengers leg and my boyfriend kept hitting it with his knee. It is removable, but then someone has to hold their own coffee. First world problems, right?

DH: But does that mean I like its styling? Well, I won’t say no, but I won’t say a resounding “yes”, either. For starters, being a compact roadster, the wide grille opening, huge foglight housings, round headlamp lenses and aggressively-angled taillamps are fine details. I’m just not sure they come together to form a fine package. Thanks to its new front and rear fascias, the 124 is longer than the MX-5 and looks a little less athletic as a result. More grand touring as opposed to sports car, which it obviously is. The MX-5, by comparison is almost not of this world on the styling front. Having said that, though: it’s good that we have two fairly distinct vehicles to choose from, even if they do share similar RWD/front engine hardware.

Comfort-wise, since our tester was a “Lusso” trim, we got fantastic leather seats finished in rich saddle brown colouring. Personally, I actually found these seats to be a little more comfortable than the items in the last MX-5 I tested, though that car had the performance package which provides deeper seats that aren’t great for the wider-hipped amongst us.

Lacey mentions the awkward cupholder positioning, but it’s a whole heck of a lot better than the way they sit between the seatbacks in the MX-5. Plus, form a purely selfish standpoint, the cupholders infringing on the passenger’s leg space doesn’t tend to bother the driver that much… 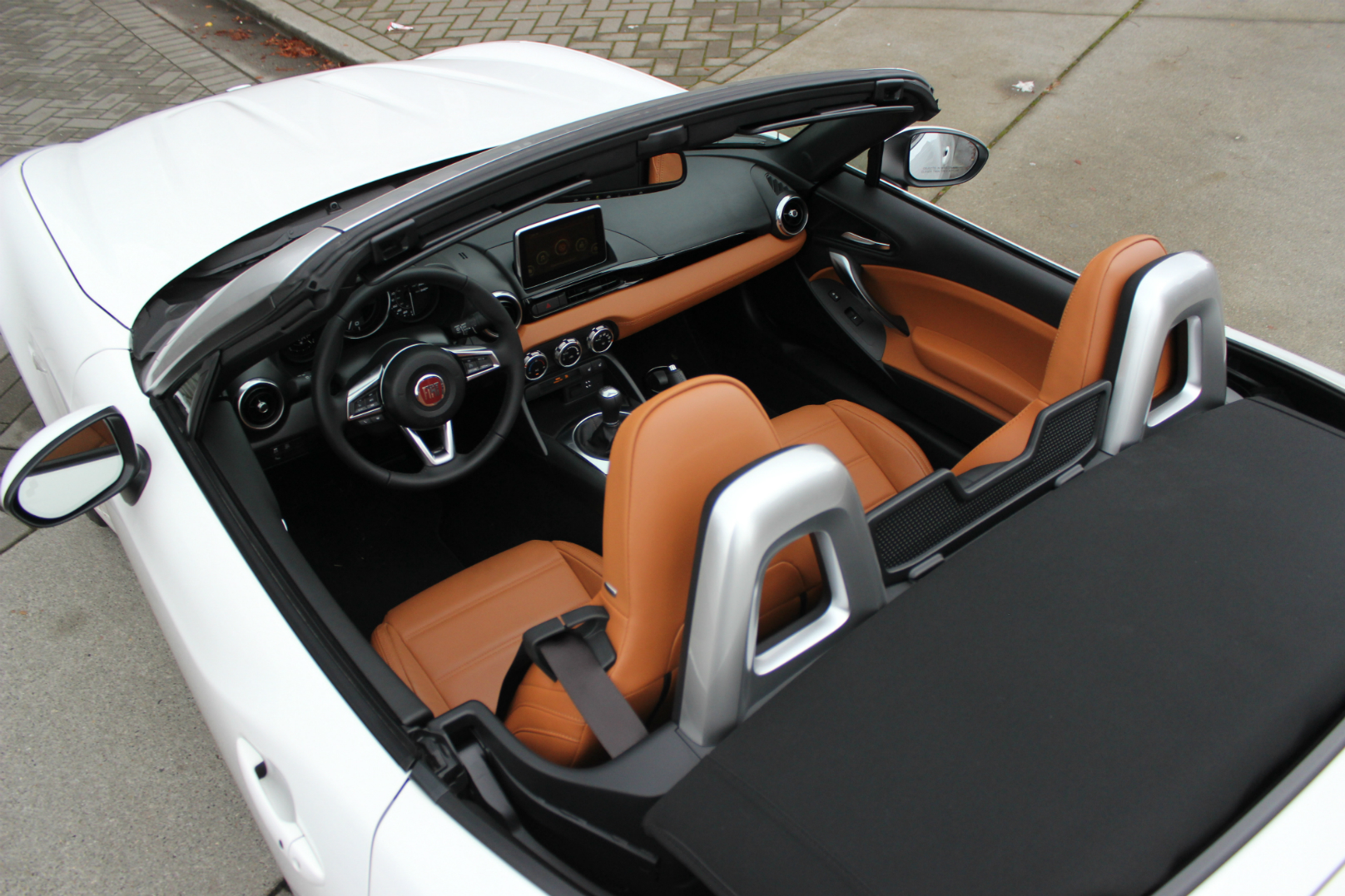 LE: Fiat’s 124 Spider is made in a Mazda plant in Hiroshima, on the same assembly line as the MX-5. They both have the same wheelbase and unibody structure.

The last time I was behind the wheel of the MX-5, I had the automatic transmission. It was great, but, let’s be honest, doing the shifting on your own is way more fun! I am giddy like a school girl driving the 6-speed manual in this Fiat.

The Fiat has a zippy 1.4L turbo 4 cylinder, that manages 160hp and 184lb-ft of torque. No, the numbers don’t seem that impressive but keep in mind that the Fiat is lightweight, even though it is almost 200 lbs heavier than the Mazda. I will tell you more about this later.

The Spider’s extra torque is nice, but, it does have some turbo lag – you don’t feel the turbo kick in until you’re past 2,500 rpm. I was expecting this to be a better engine than the Miata, but it’s not.

The 124 is extremely enjoyable to drive at faster speeds on the highway, I am sure it’s because of the extra weight. It feels solid and more grounded than its cousin.

Acoustic windshield, more sound deadening under the carpet and thicker rear glass is what adds some extra weight to the Fiat.  They all work together to make conversations between me and my passenger much easier.  Anyone who enjoys driving topless as much as I do will appreciate these extra features a lot. 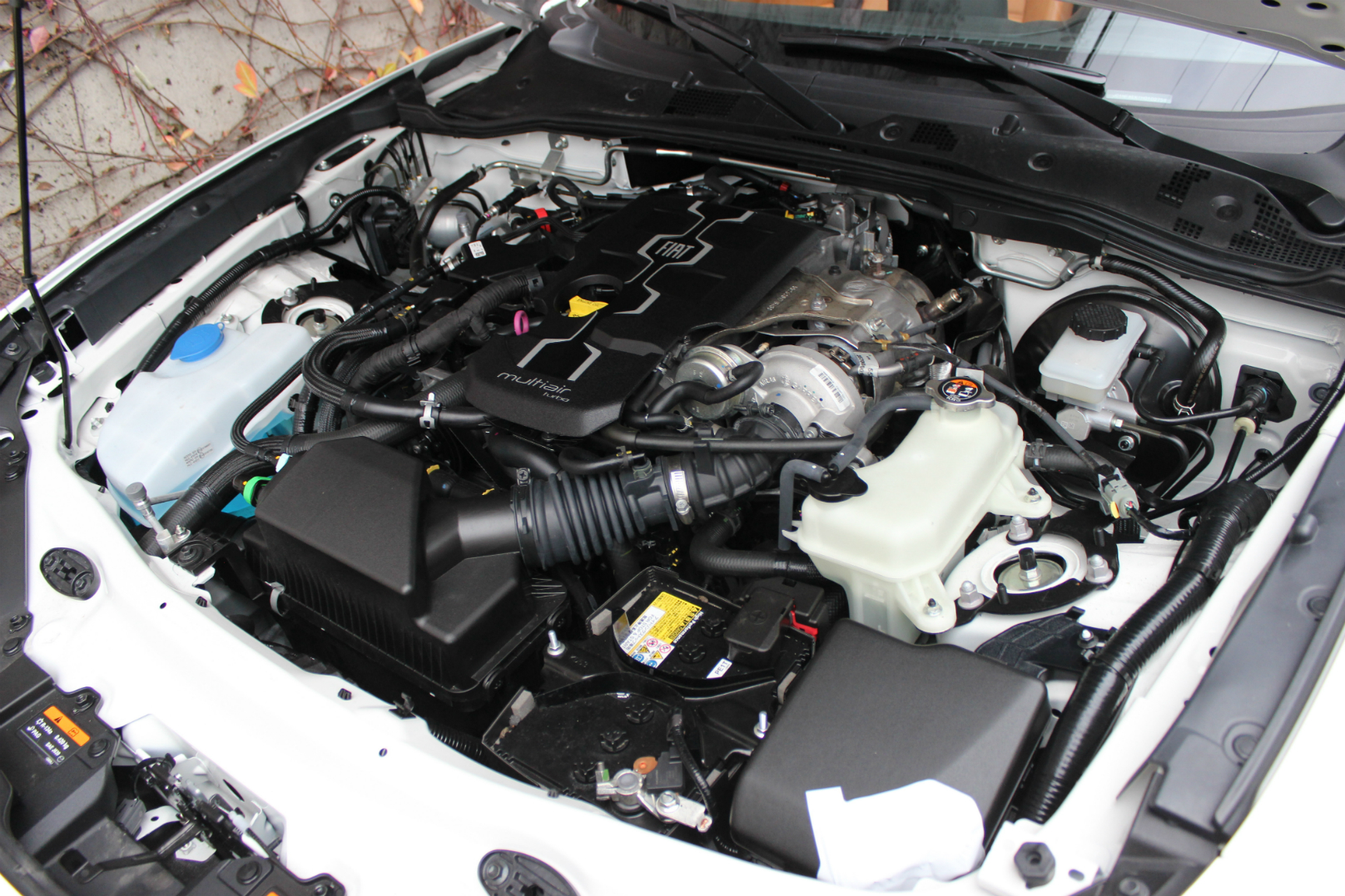 DH: For me, the 124’s drive experience is all about the turbo engine. It’s something we’ve been asking for in the MX-5 ever since the NB Mazdaspeed version, to no avail. Now we get it, and it’s a fair cracker of a powerlant with good, linear power delivery (as linear as you can get with a peak power figure of 5,500 r.p.m.) and strong 184 lb-ft of torque to help you keep things on boil as you push it.

It’s good you get that kind of power from the motor, because the transmission isn’t always on board. It’s a six-speed manual, but it’s actually a holdover from the last-gen MX-5, so you get longer gear ratios that can sometimes stand in the engine’s way. Once again, you see the 124’s softer side as the longer gear ratios make for slightly smoother progress on highway stints, if you fancy a road trip over a b-road blast up a mountainside.

I take less issue with the handling package, however. Yes; it’s a little less aggressive than what you’ll get in an MX-5, but there’s no denying that you’re piloting a proper sporting roadster when you’re behind the wheel. Turn-in is crisp, while the slightly more relaxed suspension settings mean you’re more insulated from the goings-on below. Of course, some want to feel every pebble through their butt cheeks, and you won’t be getting that here. You can probably guess as to which direction I’m going to send you if you want more of that. 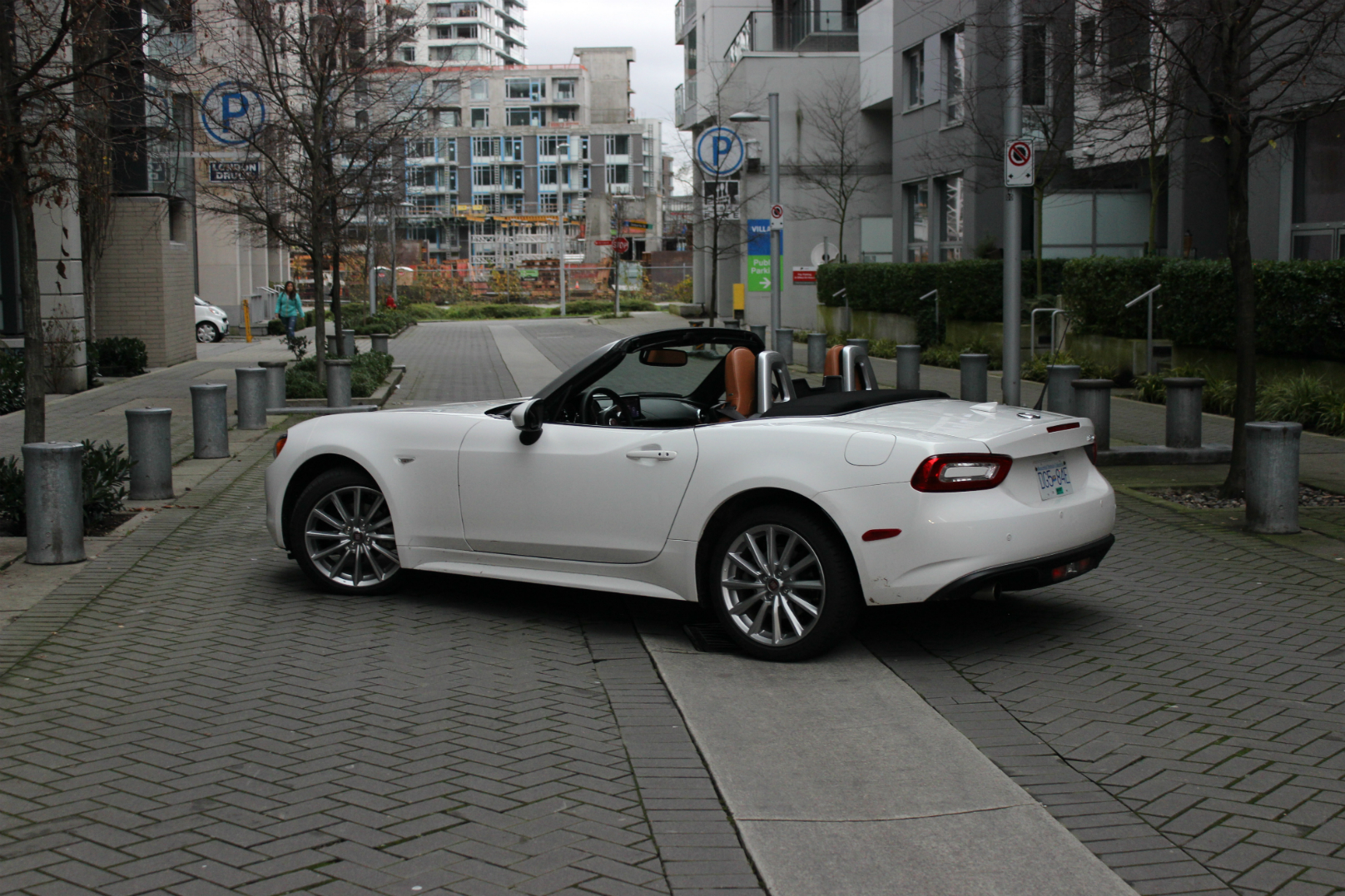 LE: The base model Classica starts at just over $30,000 and the Lusso I have is $36,495.  It comes with a few items like remote keyless entry, rain sensing wipers, heated seats and Park View Rear Back up Camera.  Having the top up creates some difficulty when backing up so this is useful.

For just over $4,000 the Premium Customer package adds on GPS navigation, LED adaptive headlamps and nine Bose speakers and subwoofer. I would add this upgrade if only for the Bose speakers! Life is pretty amazing to drive with my favorite tunes while enjoying the top down.

DH: I’m just wondering as to how they managed to fit NINE freakin’ speakers into this thing! The headrest-mounted items help, but how is there even enough volume (no, not that volume) in the 124’s body panels to fit it all? I agree with Lacey, though; they sound great, and point once again to the 124 being a perfectly-able cross-country tourer.

The rest of the infotainment system is fine, if not very ambitious in design or presentation. It’s the exact same head unit you get in the MX-5 (and every other Mazda, for that matter) and while the way you can either touch or scroll through it is fine, I’m a big fan of Fiat’s own UConnect infotainment system – one of the best in the biz, far as I’m concerned — which would be nice to have seen here.

LE: I will be honest, when you start with something as iconic as a Miata, it’s hard to think that anything could be more enjoyable. I don’t think Fiat has succeeded in being better, but it damn well has delivered something incredibly enjoyable.

DH: The real surprise for me when I did some digging into the 124 was that it actually starts at less than does the MX-5, and that’s with the more powerful turbo engine. You forego niceties like an automatic transmission at that price, but this is still a sports car at heart, and I doubt many owners will miss the slushbox all that much. The bottom line is that the 124 is a darn fun ride, which is what a vehicle like this should be all about.