Like most of you, I was always told not judge a book by its cover. However, the Ford Edge Sport is one vehicle that it would be ok to do so.

WHILE so many of its competitors are doing their level best to maintain the straight-laced, serious practicality-above-all attitude espoused by the minivans and wagons they’re trying to replace, Ford has gone the other way with its Edge crossover.

Not entirely the other way, mind; some trim packages – like the luxury-focused Titanium, for example – are still content to quietly purr along the motorway, keeping the ride smooth and the passengers in total comfort.

Important changes to one particular model, however, do indicate that rather than growing up, this all-new Edge has tilted its baseball cap sideways, donned a pair of pink-tint Ray Ban Wayfarers and taken direct aim at not just the crossover establishment, but that of the sports sedan, too.

Dan Heyman: What you see here is the model we’re talking about: the Edge Sport. Unlike so many instances where transitioning to “sport” designation meant little more than slapping some stickers on what is otherwise an entry-level model, this particular “Sport” actually sits at the top of the range.

All Sport models get a blacked-out grill as standard (it’s silver elsewhere in the range), but our tester also had optional 21-inch wheels too match. These sit at 20-inches as standard, and drop down to 18-inches on base SE models. The Titanium trim gets 19s as standard.

Those features, along with different rocker panels define the Sport from the rest, which all benefit from new styling that looks more modern and less bulbous than previous.

Short front and rear overhangs, an aggressively-raked rear hatch, subtle creases on the doors and rear quarter panels are premium details that do well to separate the Edge from others in the segment. 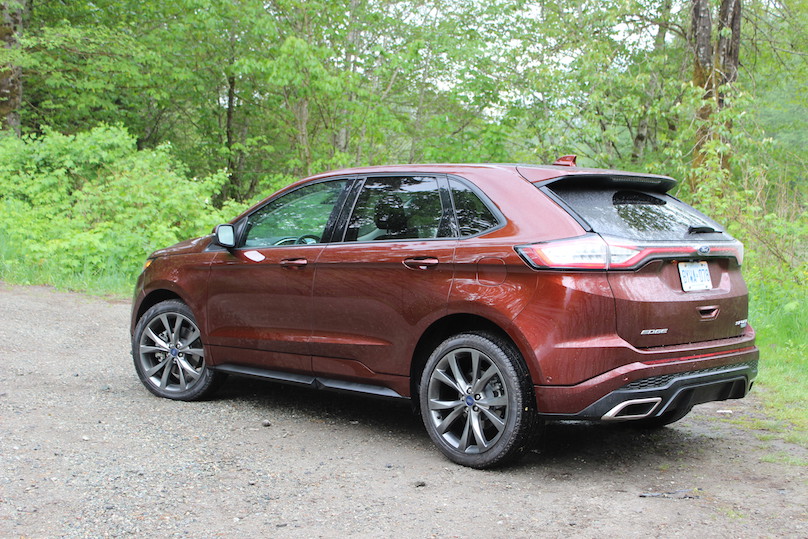 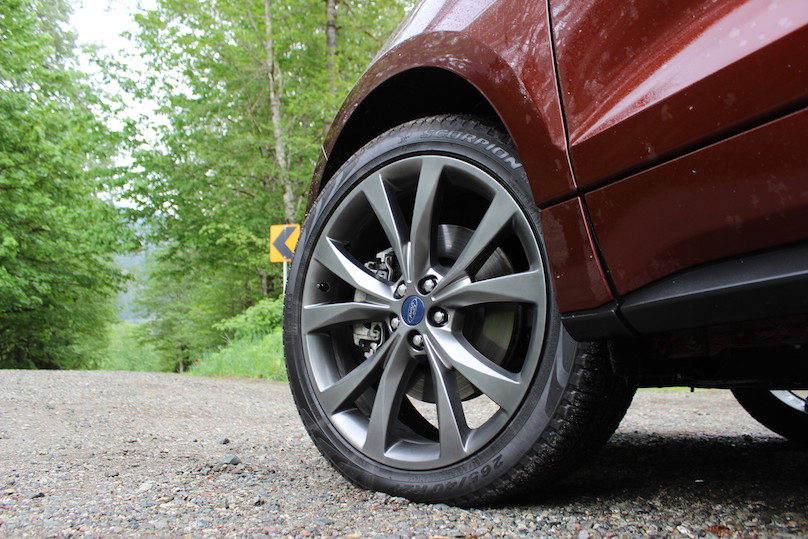 Lacey Elliot: Like most of you, I was always told not judge a book by its cover. However, the Ford Edge Sport is one vehicle that it would be ok to do so. As Dan described, the Sport trim actually looks, well, sporty. The blacken grill and larger 20″ wheels give it a touch of flare that make it stand out against the other Edge trims and its competition.

The Edge’s biggest competitor is the Nissan Murano. It really impressed me last year with updates to both the exterior and interior styling. It’s floating roof line does get a lot of attention. This Sport, however, has my vote. With out the detailing to make it look sporty; it would be an incredibly close choice.

Step inside and you have a gorgeous cockpit that could take on a lot of the luxury brands. The fit and finish are impeccable and the use of different materials is modern and upscale. No detail has been ignored. The center stack flows into the dash. All the buttons, knobs and dials are easily reached by both passenger and driver. Gorgeous ambient lighting is standard on this trim (as well as the Titanium). It lights up the front foot wells and cup holders in your choice of 7 colors. Its a small thing, but I felt that the personalization made for something special. In a world of black on black or grey on grey, it really is a nice touch.

My favorite and ‘must have’ add on is the massive Panoramic Vista Roof. It makes the cabin brighter and feels airy. The rear seat feels much more spacious. Thanks to 1,100 liters of Cargo space, Ford has more room than Nissan and it’s noticeable. 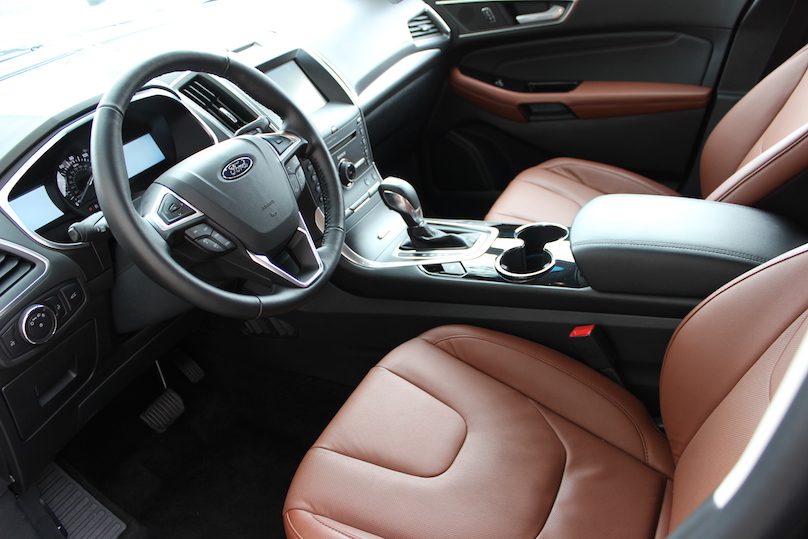 You May Like: He said/She said 2016 Nissan Murano Review

DH: When this latest generation of the Edge was launched last year, the Ford folks on-hand at the launch were keen to compare the Edge Sport to something sportier, calling it, quote “the Mustang of crossovers.”

Of course, you have to consider the timing – the latest Mustang which, at the time, had itself been recently released – was earning praise not just in North America, but overseas as well, as this marked the first time the ‘Stang was released as a global vehicle.

Thing is, they weren’t just citing the new Edge’s flash colours and big wheels to reinforce their claim. Much more so than the skin, the Edge has more in common with Ford’s popular pony car than you may think.

You see, the ‘Stang becoming a global product meant the need for smaller, more fuel efficient yet still powerful engines to support the European market. For that, they decided to put a turbo’d four-banger in the car for the first time since 1986. It’s an all-new engine and like that car, the Edge gets an all-new, turbo’d motor of its own.

It’s a 2.7L V6, good for 315 hp and 350 lb-ft of torque (I’ll save you the trouble: that’s more than what’s made by the Mustang), the latter reaching peak output at 2,750 rpm. That’s pretty skookum stuff that really isn’t touched by the likes of the Hyundai Santa Fe Sport or the Nissan Murano, the latter of which is one of the Edge’s main competitors, according to Ford.

Now, while the Edge Sport may not feel quite as fast as a Mustang off the line, all that power means it’s pretty durn close, and as near to ratifying Ford’s claims as anything that’s come before it. Turbo lag is pretty much nonexistent, meaning both launch and passing manoeuvres at speed are carried off with hardly a hitch.

The Sport even provides a nice bellow through its twin exhaust outlets on hard acceleration, which is befitting of the “Mustang of crossovers” designation. It may be a little too loud for some, but the distinct lack of wind- and road noise thanks to the well-insulated cabin should make up for it.

A little tougher to forgive is the fact that there is no towing package available for the Edge Sport, while other trims do have the option. For a vehicle aimed at young, active couples and families, that seems a little odd. Wouldn’t those selfsame families want to be able to tow a pair of Sea Doos? How about a dirt bike? I dunno; just seems like a bit of a missed opportunity, so don’t be surprised if a tow package makes its way to the Edge Sport at a later date.

The Sport would, however, be a willing dance partner on the winding road leading to the cottage. In addition to the more powerful engine, the Sport’s suspension has been tuned to be more responsive, so it has the chassis to handle all that power.

Indeed, get past the slightly woolly steering, and the Edge is keen to change directions and keep things copasetic while doing so. Want more driver involvement still? Activate the six-speed transmission’s manual mode by flicking one of the wheel-mounted paddles, and have at it. It’s worth noting, however, that the transmission will only stay locked in manual mode if you select “S” with the shifter; it will revert back to auto if you’re just coasting along. 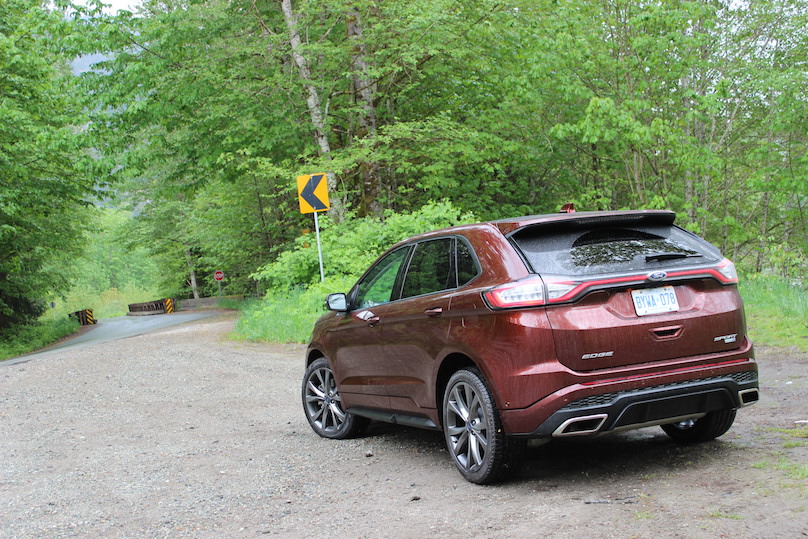 LE: Not only does this Edge look luxurious, it drives like it, too. I just can’t get over how unbelievably quiet and smooth it is compared to the previous generation. On every day driving, barely any engine noise creeps into the cabin. The minimum noise from this V6 engine is a low growl and feels comforting rather then overbearing. Put your foot down though and you will feel the 315hp and 350 lb-ft of torque. None of the competition comes close to this

If quiet is what you are after, the Sport won’t be the trim for you. When you drive more aggressively the engine noise does creep inside the cabin. I personally like it. I appreciate that I can have my quiet daily drive yet kick it up a bit when I want to have a bit more fun. The base 2.0 liter EcoBoost with 245hp will be more than enough for most.

The newly tuned suspension is noticeably more responsive. Steering is a bit heavy but this SUV feels solid when taking corners. Use the paddle shifters to shift for yourself and get even more kick. Spend a lot of time highway driving? The Edge is a dream come true. I felt like I was cruising along in a luxury brand.

DH: For me – and many others, if our research is any indication – the big change for this latest Edge in the tech department is that you’re no longer stuck dealing with an all-touch interface for your climate and audio controls. Radio seek and temp buttons, along with a great big volume knob make their triumphant return, resulting in easier interaction with the various systems. It’s no longer the case that you have to spend precious seconds ensuring that you’ve turned up your favorite REM track just so, or to not sweat yourself out by inadvertently cranking the temp to 30 degrees, because you weren’t sure if the car sensed how many times you’d prodded the climate control.

The next big thing is the arrival of SYNC3 infotainment with MyFord Touch, which represents a big step up over what we’ve seen previous. The touchscreen is responsive, intuitive and nicely designed, so, like the climate controls, you don’t have to spend as much time looking at it to preform simple actions. The old car’s quadrant interface is gone, too, replaced by a string of buttons at the base of the screen for quick access to most of the commands. It’s one of the best in the biz. You do have to step up to the Titanium to get it, though.

It is awesome, the Sport, and those that have the means will undoubtedly be impressed and happy with their purchase. Still, the addition of a turbo four with AWD for this generation – that’s a first for the Edge – is going to be a very tempting proposition for many buyers, and will likely make up the lion’s share of Edge sales. 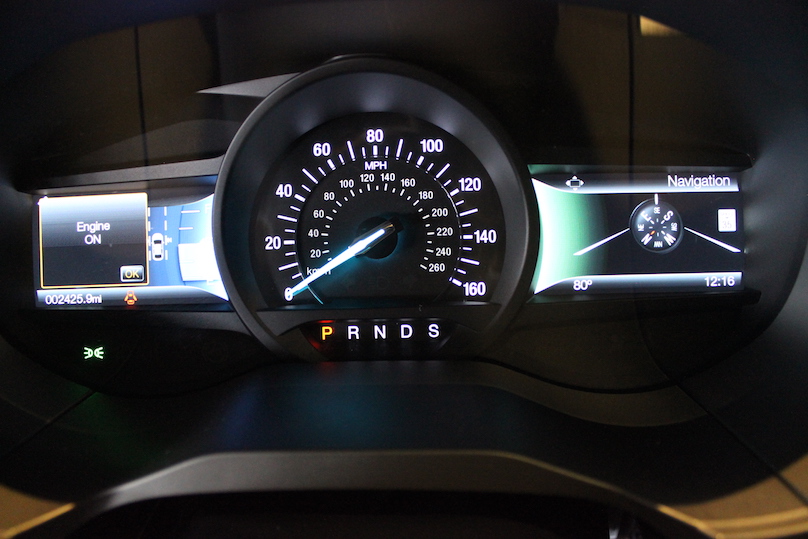 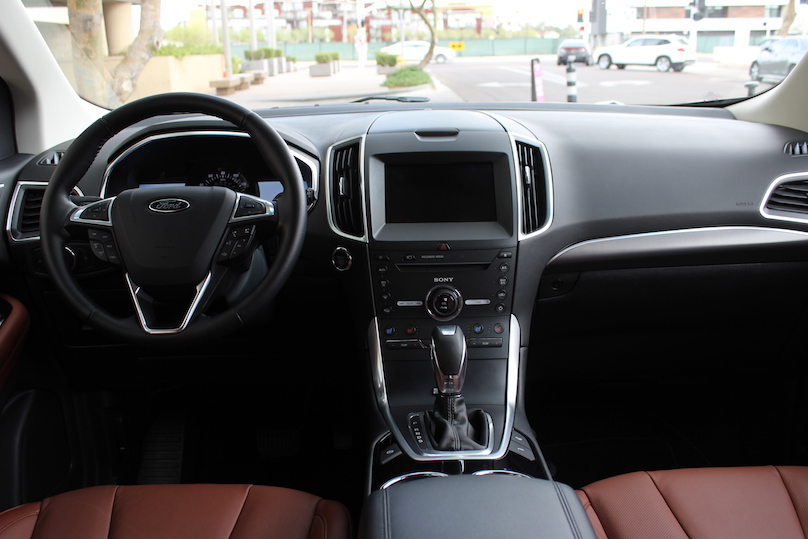 LE: I couldn’t agree with Dan more. Ford listened and incorporated just enough buttons and dials in the cockpit to make for a much easier time. Yes, the touch screen technology is fantastic. However, over the years I have realized that some gestures just work better with a dial.

Items like automated parking assist, rain sensing wipers and lane keep assist are just a few items that add to my driving enjoyment. Living in Vancouver, the rain sensing wipers are a game changer. And of course, let’s not forget foot-activated hands free power lift gate. Once you have it, you will wonder how you ever lived with out. It’s standard on this trim.

The MyFord Touch system is more responsive and has been improved in every area. It is much more intuitive and works to bring your technology together. As technology begins to be in more and more of our daily lives, integrating easily into our vehicles is on purchasers top of mind

I enjoyed all the ‘sport’ in the Edge Sport. The base SE starts at just over $31,000 and you can pick FWD or AWD. For close to $44,000 the top of the line, loaded Sport gives you a vehicle that is both comfortable and powerful. Go ahead and judge, this Edge can take it.