The 2017 Nissan GT-R, after its first major makeover since its launch a decade ago, pictured here in a new shade of Blaze Metallic, boasting a bump up in power, new exterior styling cues, new interior refinements, new technologies and new amenities. And still a beast.

I get that a lot. And it begs a follow up question.

“Do you actually drive a GT-R?”

This past week was one of those occasions. 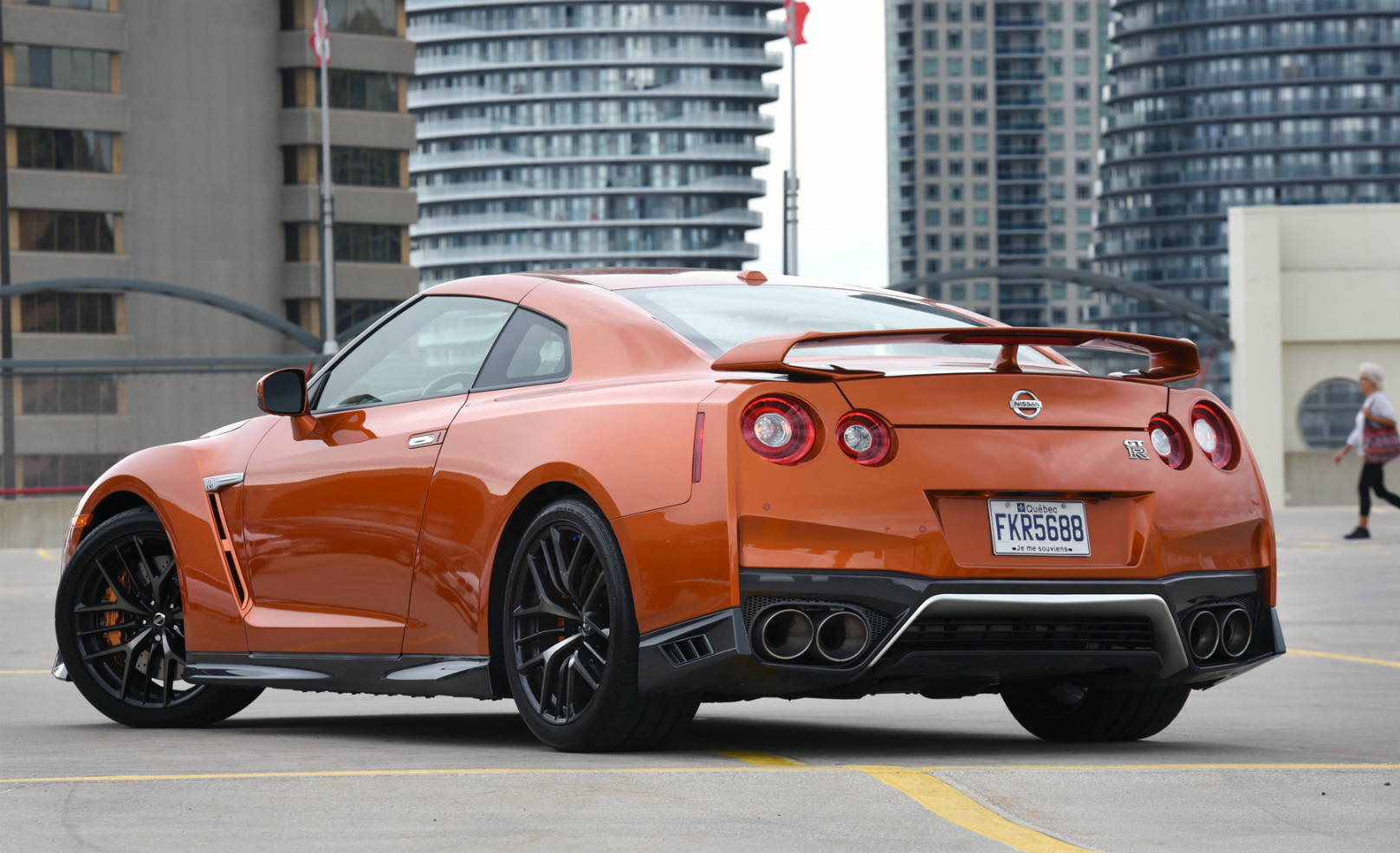 Nissan’s iconic supercar – the GT-R – also known to gearheads as “Godzilla” for it monstrous power and tenacious road-holding abilities, has undergone its most significant makeover since debuting a decade ago at the Tokyo Motor Show.

The new 2017 GT-R Premium R35 model, going on sale this summer, has been refreshed with a focus on five key areas – exterior design, interior refinement, performance, comfort and technology, with adjustments that, in keeping with its namesake, seek the optimum blend of “GT” (Grand Touring) and “R” (racing) abilities.

The average passer-by might be fooled by the amount of “Zed-ness” in GT-R styling but aficionados recognize its lines immediately, the revised exterior now featuring the V-motion grille that’s pushing the new familial look across the Nissan lineup.

The grille is also bigger for better cooling and features a new matte chrome finish and mesh pattern. Other changes include a reinforced hood, pushed-out side sills, a higher beltline and new rear body pieces with functional side air vents near the quad exhaust tips. 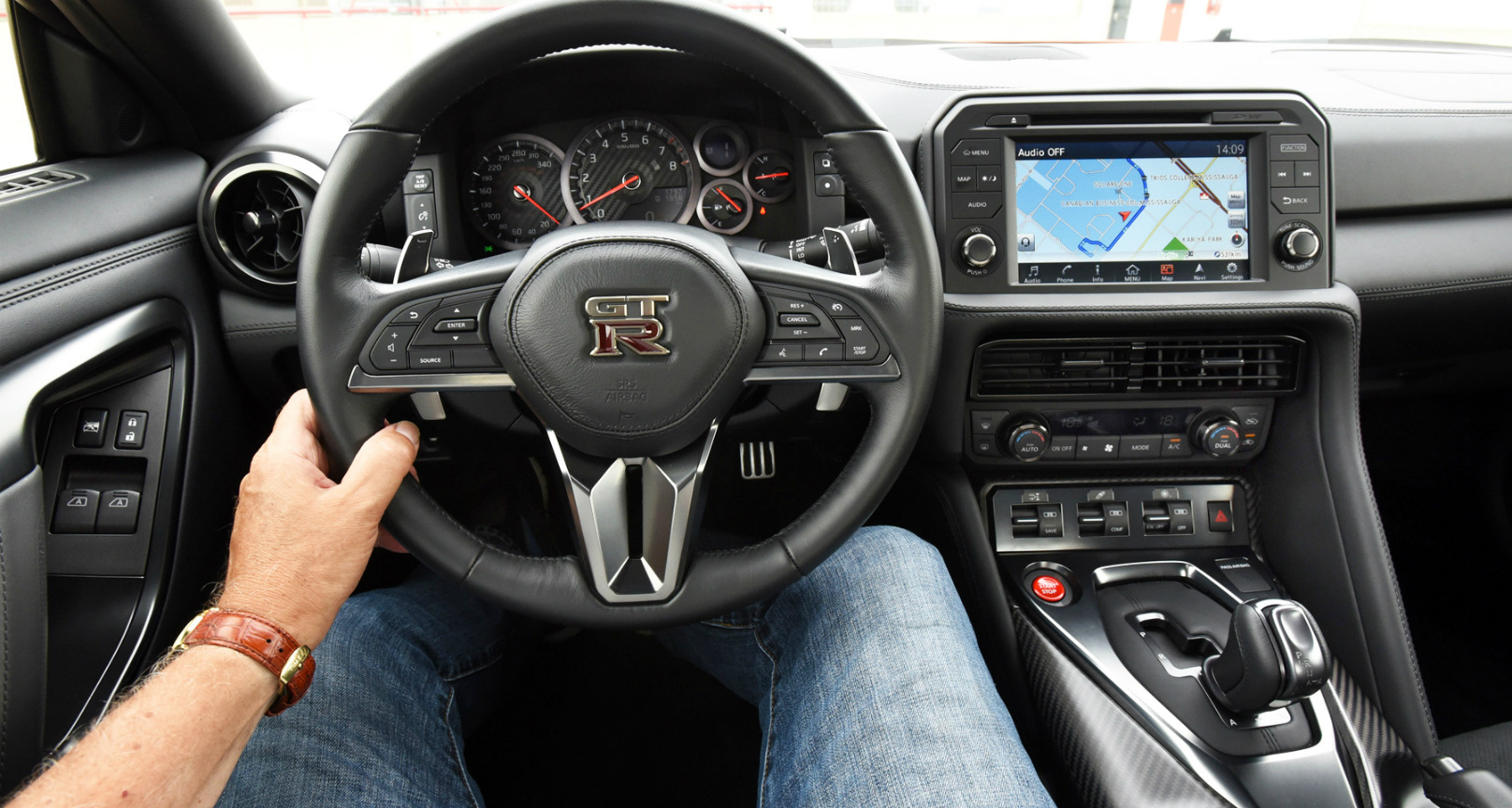 The GT-R hangs onto its slick 0.26 drag coefficient rating but the styling tweaks enhance its high-speed stability.

And, as a final exterior touch, Nissan has added a new Blaze Metallic colour to the now seven-shade paint palette.

“Are you picking up the clown car?” a colleague asked while I waited for the keys. “The orange one?”

I’m usually on the fence when it comes to bright colours on expensive sports cars. But, then again, life’s too short to be boring. 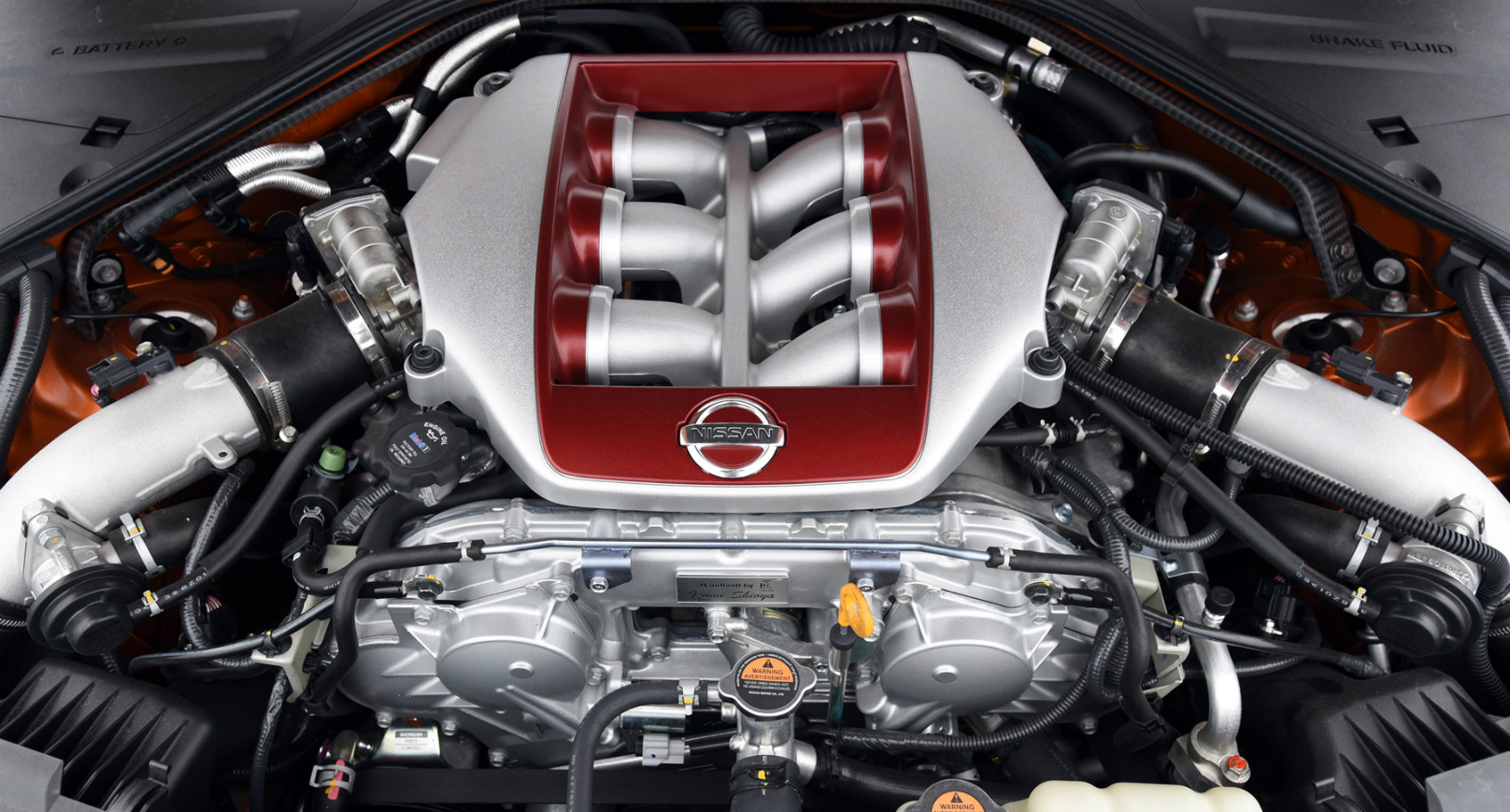 Inside, the snug confines of the GT-R cabin have been refined.

Yes, the rear seat remains ridiculous, the front seats butting up against it – really more of a parcel shelf than a seat. And even a first-year design student could add a little more ingenuity to the standard-issue buttons and cheesy black plastic interior door release.

But who needs passengers anyway? And the other interior upgrades are obvious enough with, in this case, standard black Nappa double-stitched leather encompassing a new seamless instrument panel and new comfortable, bolstered seats. Three other premium hand-stitched leather interior choices ($4,100) are also available.

A funky carbon-fibre console covers the drivetrain tunnel. Integrated nav and audio controls reduce the previous model’s 27 switches to just 11 in the 2017 GT-R. 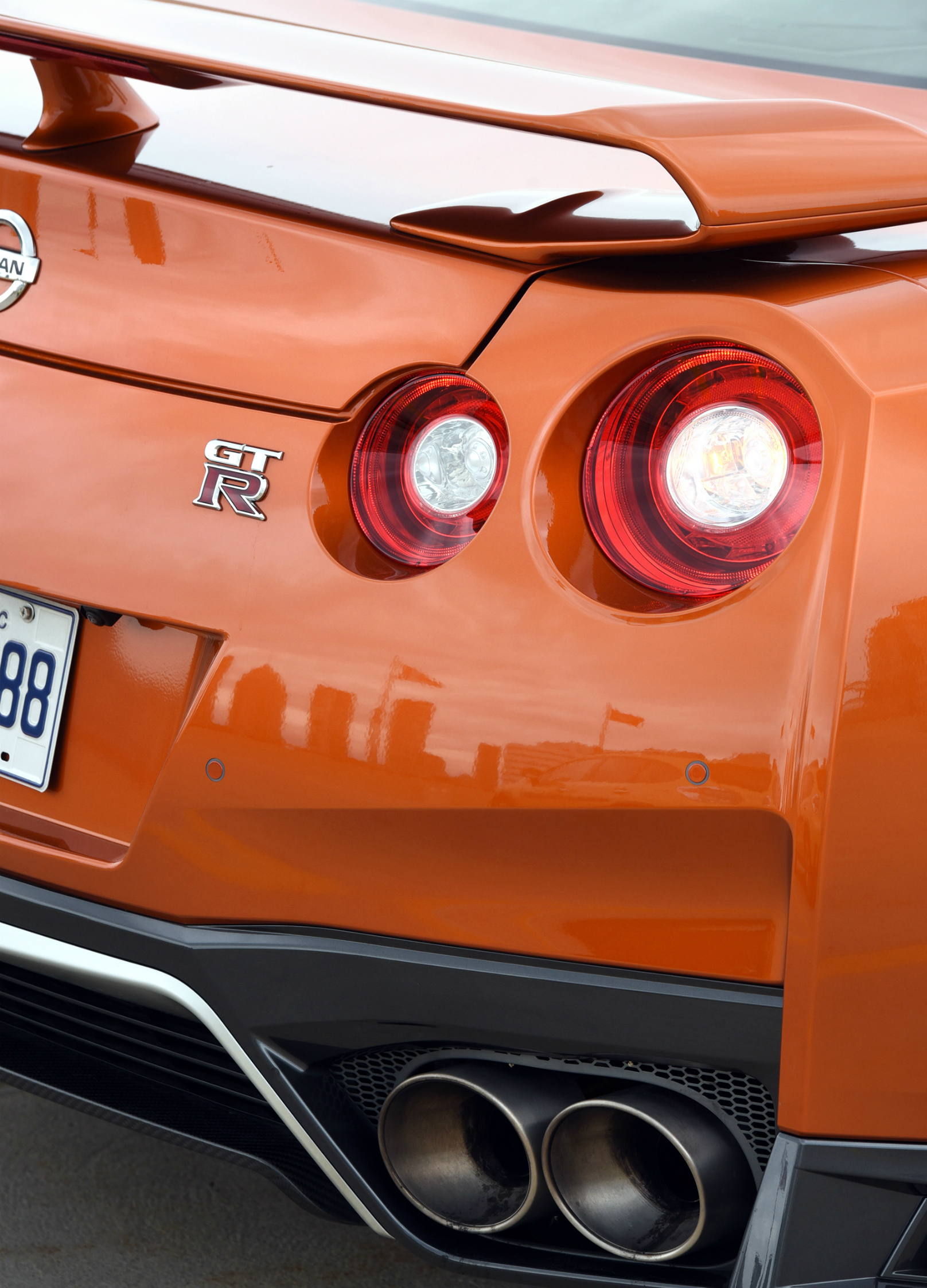 Shift paddles are now mounted on the new steering wheel instead of on the steering column, an improvement that allows for shifting in mid-turn. And an eight-inch touch-screen expands on the -inch original. New techs include NissanConnectSM with navigation and a series of mobile apps and services.

There’s no attempt at Spartan weight scrimping here. All the mod cons and comforts come standard. Making the GT-R, for the first time, a high performance car that you can live with everyday. Even the trunk space is okay.

So, let’s get to the meat of the matter, under the hood, where the GT-R’s award-winning VR38DETT 3.8-litre twin-turbocharged V6 now makes 565 hp (+20 hp) and 467 lb/ft (+4 lb/ft), added power that come courtesy of a little extra turbo boost and individual cylinder ignition-timing.

My tester’s engine plate was signed by Izumi Shioya, one of the four Nissan Takumi (artisans) who hand-assemble each and every GT-R engine.

Now, I’m not going to pretend I noticed the margins of increased power after tiptoeing about town for a few days. But the last time I drove a GT-R was during a daylong session on the Buttonwillow track in California, and I can still practically feel, smell and taste the adrenalized experience of the already prodigious power offered then.

The GT-R channels that muscle ingeniously down a carbon composite driveshaft to a 3-mode six-speed dual-clutch transmission positioned at the rear of the car which, together with the set-back engine position of the Premium Midship platform, contributes to a 54/46 front/rear weight ratio for well balanced performance.

The wide, low profile tires sometimes tramline in road ruts and there’s a trace of all-wheel-drive low-speed binding during sharp-turned parking maneuvers. But Nissan’s ATTESA E-TS all-wheel-drive with Dunlop Sport Maxx 255/40/ZRF20 GT600 tires up front and the 285/35/ZRF20s in back combine for slot-car-like cornering when you really need it.

And together, that trio of supercars, the true “halo cars” of the 2017 lineup, capture the ultimate performance characteristics, grand touring abilities and racing heritage intrinsic to the Nissan brand. 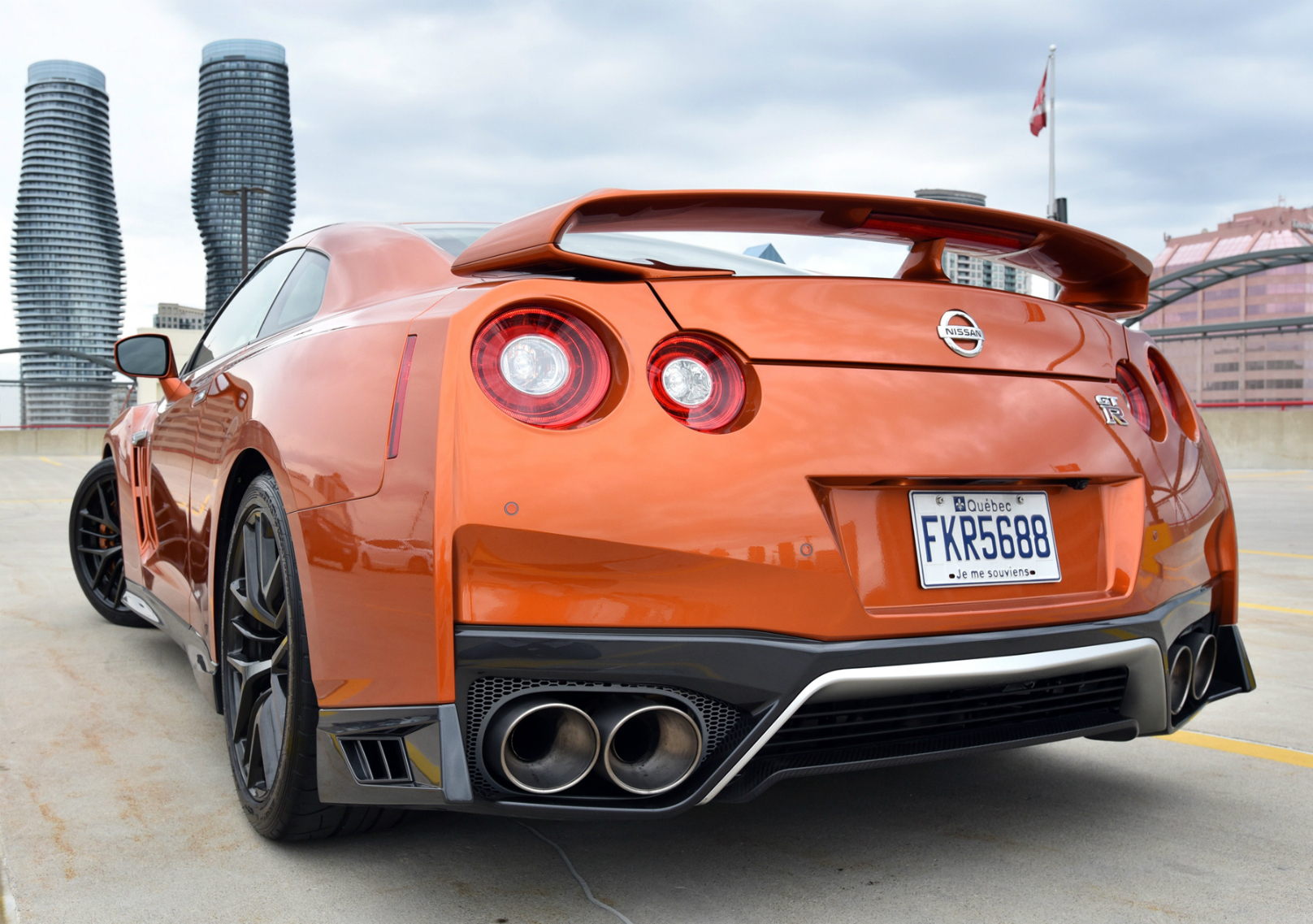