The 2017 Mercedes-Benz GLC 300 4Matic is a crossover SUV that sits near the top of the compact luxury SUV class in sales.

With the same underpinnings as the C Class Sedan, the 2017 GLC 300 4Matic has been a success story for Mercedes-Benz Canada.

Winner of the Best New Premium Utility Vehicle category in the 2017 Canadian Car of the Year Awards by the Automobile Journalists Association of Canada (AJAC) last fall, the GLC has been one of the front-runners in sales among compact luxury SUVs after the first four months of the calendar year, trailing only the Audi Q5.

Compact luxury crossovers are a fast-growing area of the market, now with more than a dozen entries, including the Acura RDX, BMW X3 and Lexus NX, which also sit near the top of the sales charts. 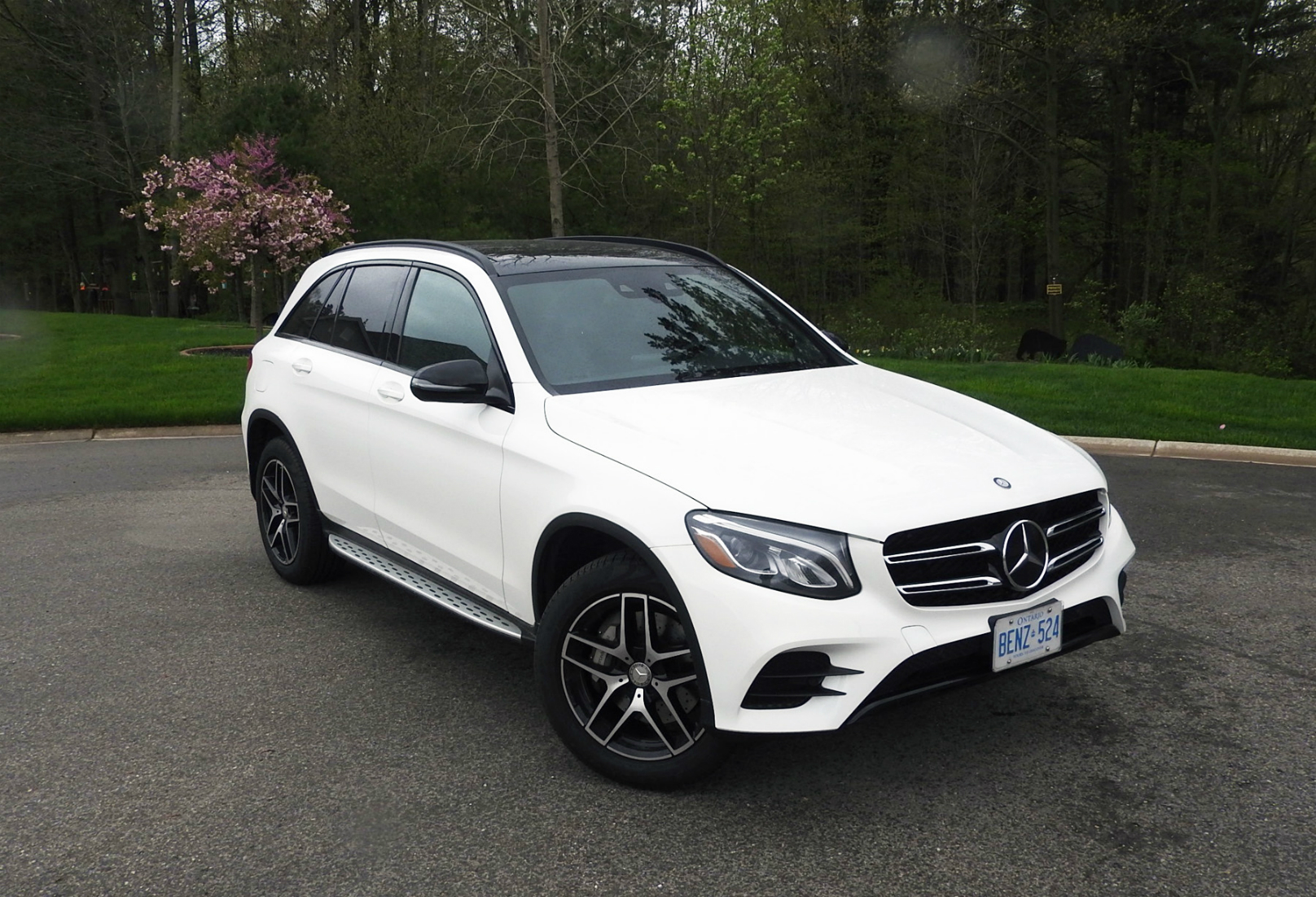 The GLC came online in 2015 as a replacement for the GLK, with the ‘C’ in the name a reference to its C Class roots.

Less edgy and more refined than the outgoing model, the GLC 300 isn’t quite as distinctive as its predecessor, yet it has nice, rounded lines, creating a more aerodynamic, stylish look. In fact, its coefficient of drag is down to 0.31 from 0.34 in the GLK.

With a 2.0-litre turbocharged four-cylinder engine under the hood, the GLC has adequate power with 241 hp and 273 lb/ft of torque. 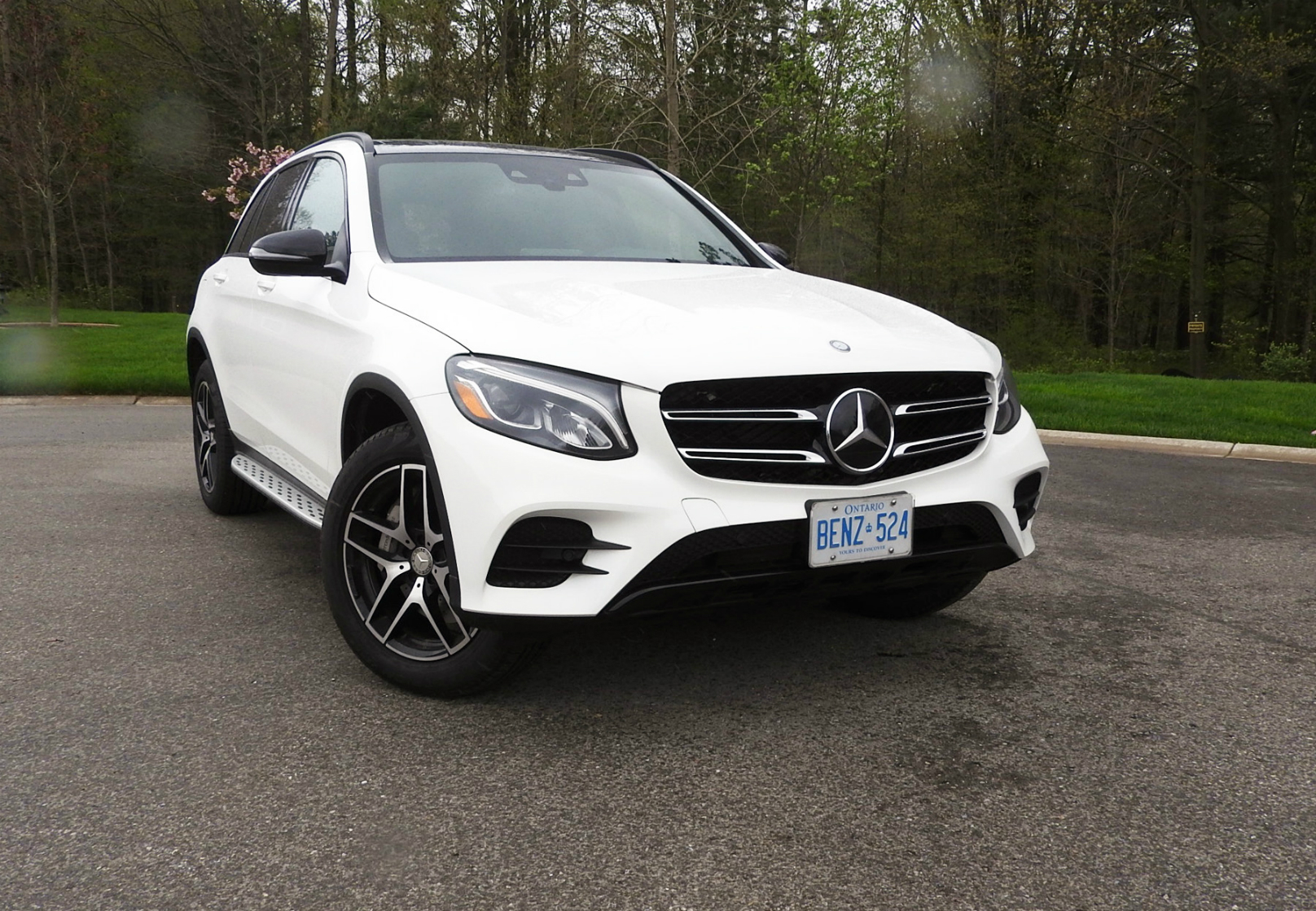 It is mated with a nine-speed automatic transmission with steering wheel mounted paddle shifters and features permanent four-wheel-drive, great for the snowy winter months we have in most parts of the country. This drive system splits the torque 45:55 front/rear.

Fuel efficiency and performance have been improved over the GLK in part because of a weight reduction of more than 100 kg. The body itself is 50 kg lighter due to more extensive use of aluminum and high- to ultra-high strength steels.

The GLC 300 is geared more to comfort than performance and delivers one of the best rides I have encountered among small and mid-size crossovers. 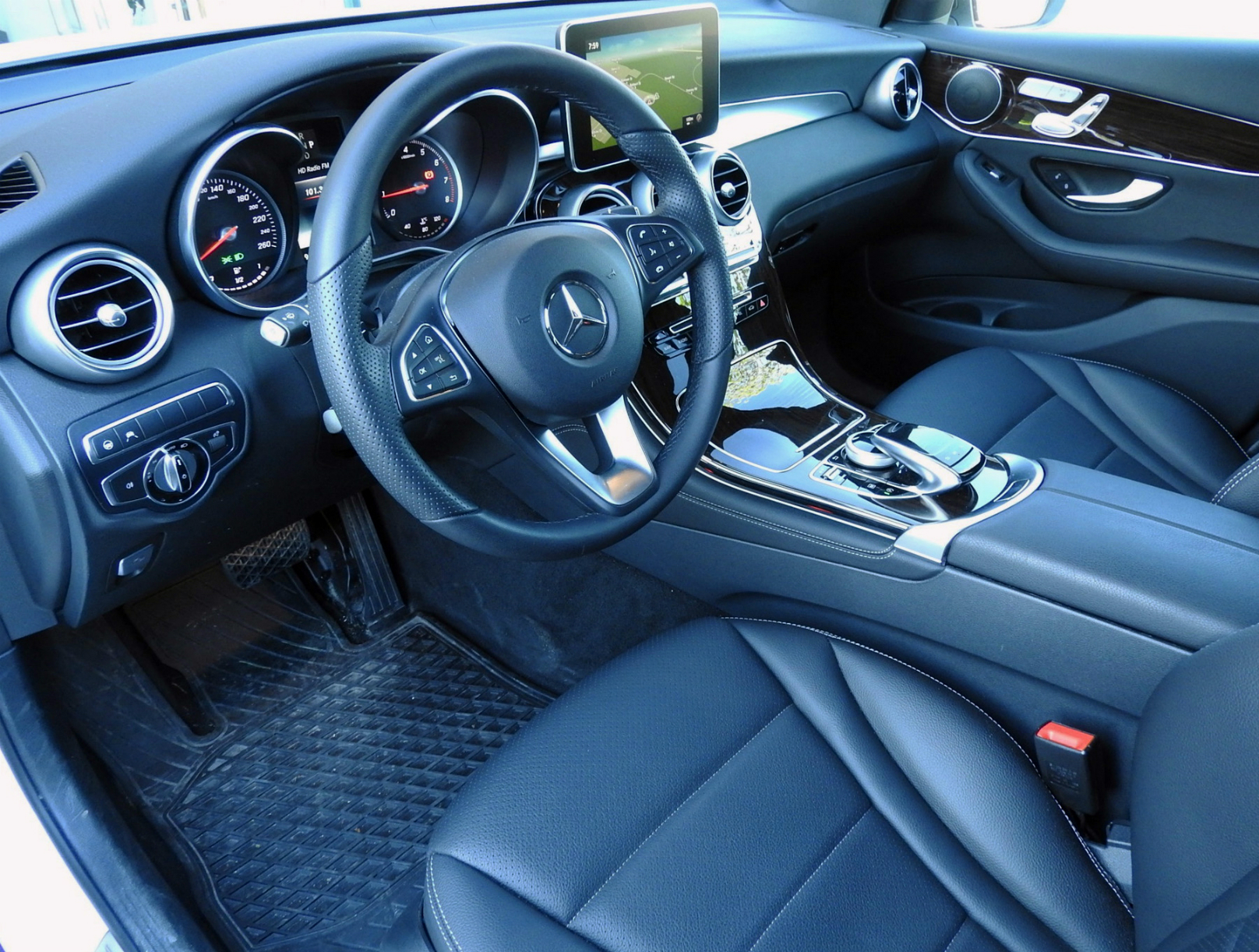 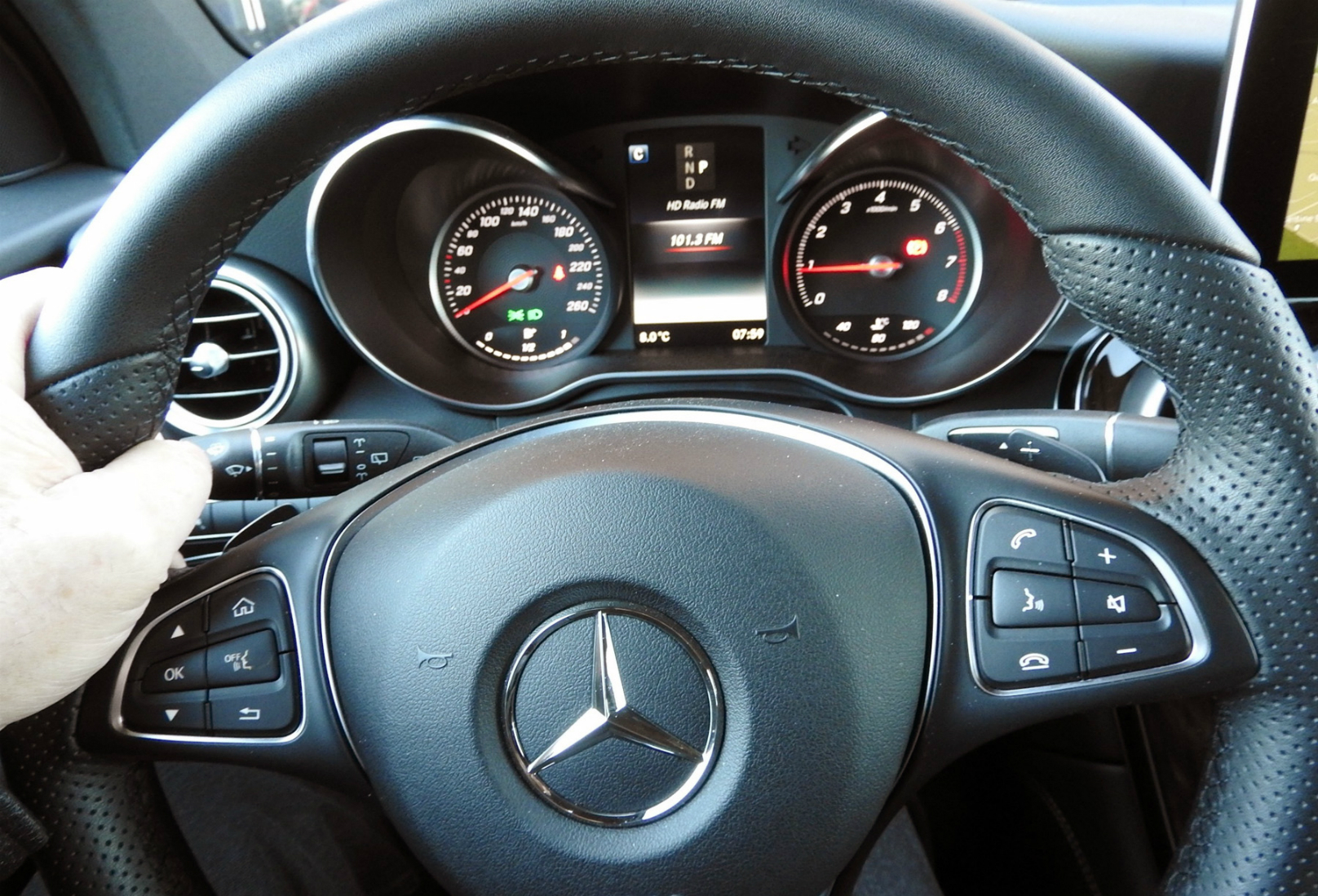 The $2,700 Intelligent Drive Package would be on my checklist, adding items such as blind spot assist, lane-keeping and cross-traffic assist, and an advanced cruise control system with emergency braking.

Stand-alone options such as a trailer hitch ($750), LED high-performance headlamps ($1,100) and aluminum running boards ($750) rounded out the add-ons on our test car.

Inside, the GLC 300 is nicely packaged, comfortable and reasonably roomy. 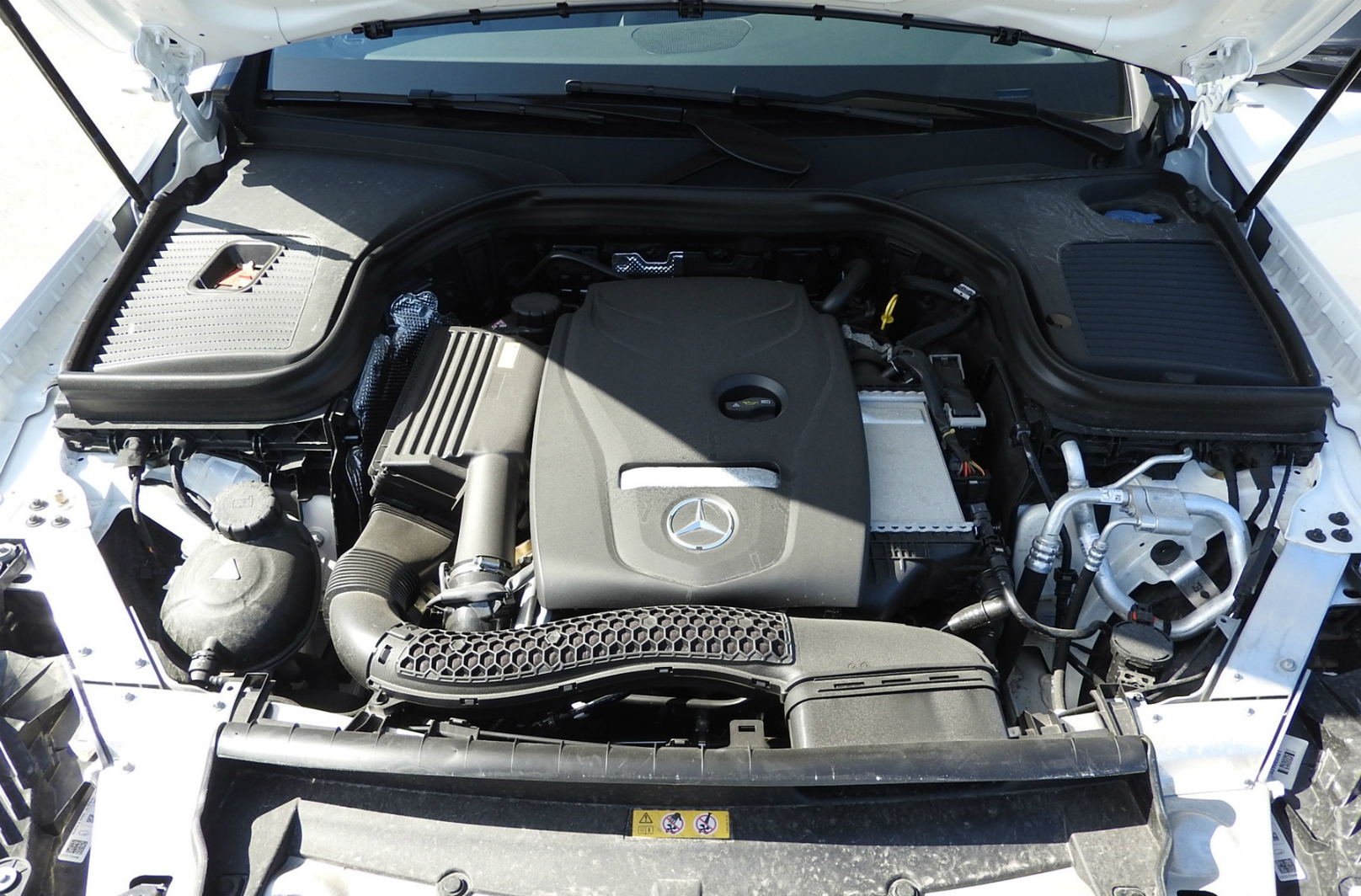 The cabin is distinctively Mercedes-Benz with the familiar round HVAC vents that swivel from side to side sitting high on the dash.

Wood paneling adds an upscale look to the door panels and a seven-inch infotainment display screen sits high up on the centre console, and extends above the sweeping dash.

The screen resolution and graphics are first rate, but the infotainment system itself is not as intuitive as a non-techy driver like myself would prefer.

According to the manufacturer, almost all key comfort factors for the interior have been improved over the outgoing GLK, with more head, shoulder and legroom both front and rear.

There is also 34 mm more foot space to enhance ease of entry and exit from the vehicle.

On the road, the GLC handles with aplomb, appearing smooth, quiet and controlled in all but the harshest of situations.

The wheelbase is 118 mm longer than the outgoing model and the new GLC has what Mercedes calls Agility Control suspension with steel springs and a variable damping system as standard fare.

Buyers can also add an optional air suspension system that changes the ride and handling according to the drive mode selected.

All in all, the GLC is a well-rounded crossover SUV that is equally at home on city streets or rural roads.

With so much going for this compact crossover, it’s not hard to see why the GLC 300 is among the class leaders, just as the C Class Sedan is a front-runner in its segment. 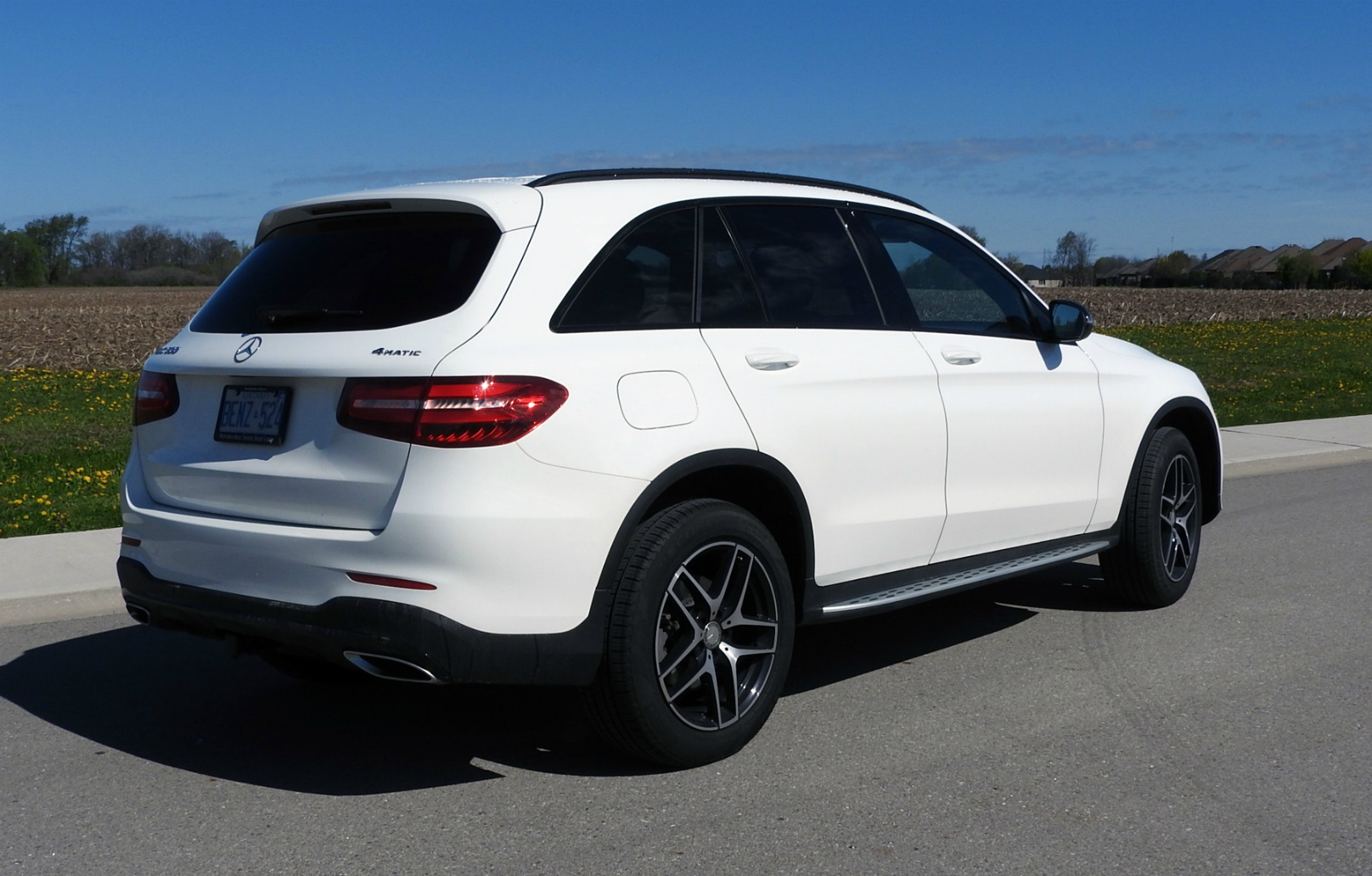