Getting my Kicks on Route 66

Stepping outside the comfort zone

Okay, so before I get too deep into the weeds here, I’m going to issue a disclaimer: a subcompact crossover with a small engine, high centre of gravity and the aerodynamic properties of a brick isn’t an ideal choice for long hauls on the Interstate.

Ideally, you’d choose a vehicle with more power, more room, and better directional stability. It just so happens that Nissan Canada brought along two such vehicles for our recent Route 66 adventure, but I’ll deal with them in a subsequent article that will appear on Wheels.ca in the coming days.

But first, the Kicks.

In case you may not be aware, the Kicks is the smallest crossover in Nissan Canada’s lineup. The subcompact originally debuted in 2016 in Brazil and was subsequently rolled out in Latin American markets before arriving in North America as a 2018 model. The Kicks’ arrival here marked the end of the line for the slow-selling Juke, which still exists primarily in Europe (an all-new second-gen model just went on sale there).

At any rate, the Kicks is based on the company’s global V platform which serves as the basis for several cars including the European Micra (K14), Versa Note, and first-gen Juke. All North American units are sourced from Nissan’s plant in Aguascalientes, Mexico. 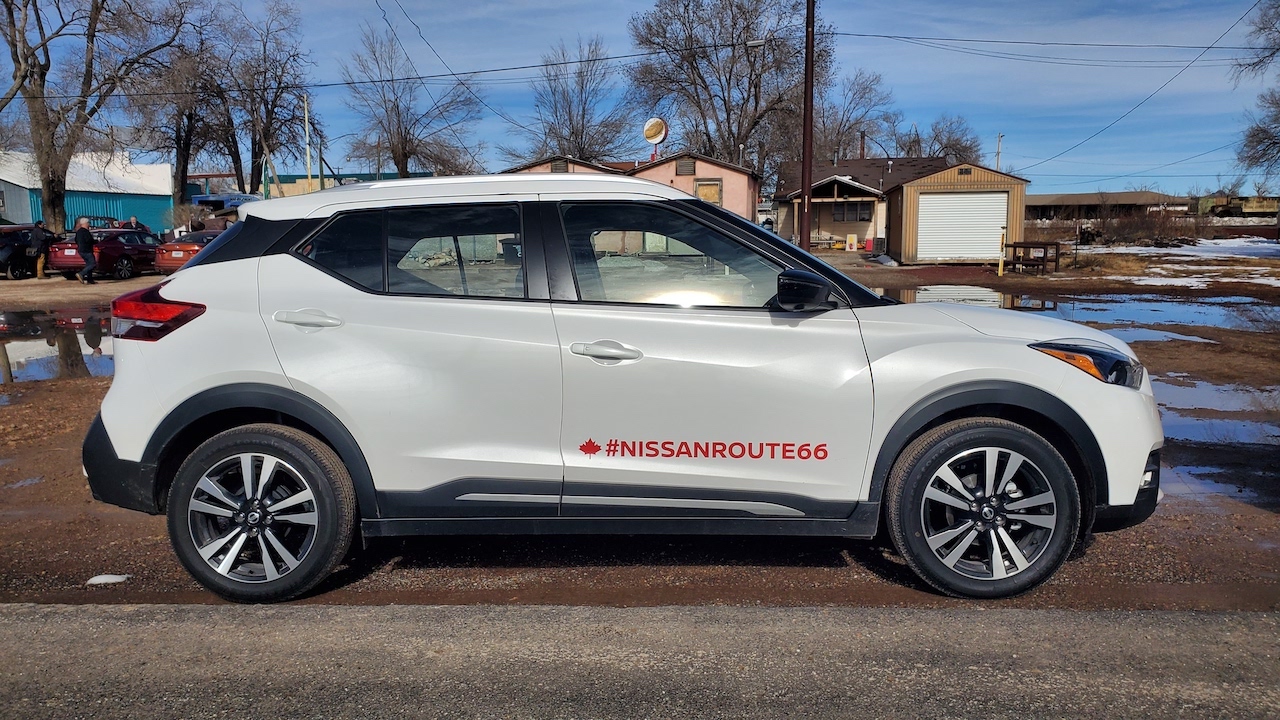 For Canada, three trims are available (S, SV and SR) and all are powered by a dual-overhead cam 1.6-litre 4-cylinder engine that produces 122 horsepower at 5,800 rpm and 114 lb-ft of torque at 4,000 rpm. The only gearbox on order is Nissan’s Xtronic CVT that drives the front wheels. All-wheel drive is not offered.

So, does the market approve of the Kicks? The answer to that question is an emphatic yes. In its first full year on sale in 2019, the Kicks has become a bit of a sales juggernaut. It is currently Nissan’s third best-selling vehicle in Canada (15,004 sold through Nov. 30) behind the Rogue and Qashqai crossovers. Quite a meteoric rise for a vehicle that’s only been on sale for about 18 months.

For the purposes of Route 66, Nissan Canada brought along three 2019 Kicks SR units (2020s weren’t yet available, according to Nissan). At the outset, I should note that all three are Canadian-market units, so what I drove is what you’ll find at your local Nissan dealer, including colours and options. 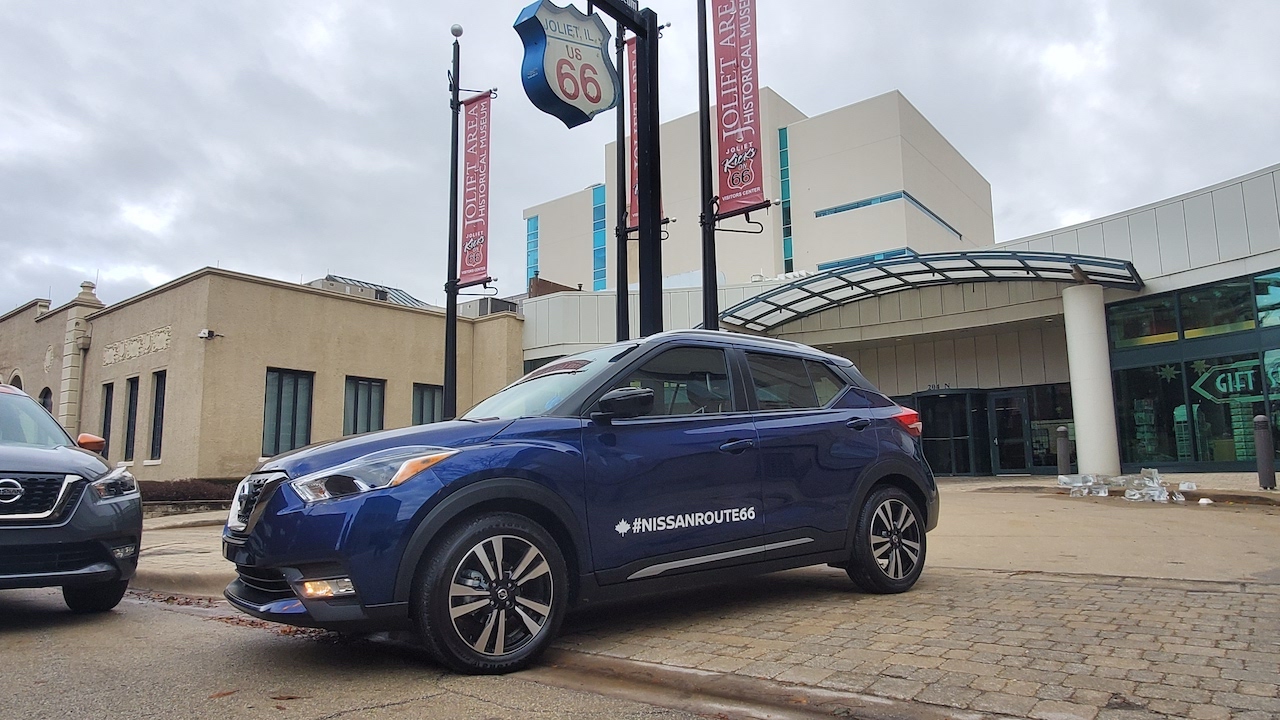 The 2019 Kicks SR retails for $23,398 (plus applicable taxes) and comes with a boatload of standard equipment. Among these are 17-inch alloy wheels, Intelligent Around View Monitor, Blind Spot Warning and Rear Cross Traffic Alert, BOSE Personal Plus Sound System with 6 speakers, two UltraNearField Speakers in driver’s headrest, Android Auto / AppleCar Play compatibility, and a lot more.

I should also mention that our test vehicles were equipped with colour options: two units were finished in Aspen White and Deep Blue Pearl ($300), while the other had a combo Gun Metallic / Monarch Orange ($295) treatment.

Because I’m trying to limit my Route 66 meanderings to a reasonable word count (!), I’m going to provide the Coles Notes version of my Kicks driving experience. Don’t worry, dear reader, I’ll dig deeper into my thoughts on America’s iconic road in future articles. Watch this space.

Anyway, I drove the Kicks three times over the course of seven days, splitting time behind the wheel with a drive partner on each occasion. The first was on day one as we left from Chicago in the Monarch Orange-topped tester and headed due south towards Cuba, Missouri, followed by return engagements on day four (Amarillo, Texas to Albuquerque, New Mexico) and day six (Flagstaff, Arizona to Needles, California). 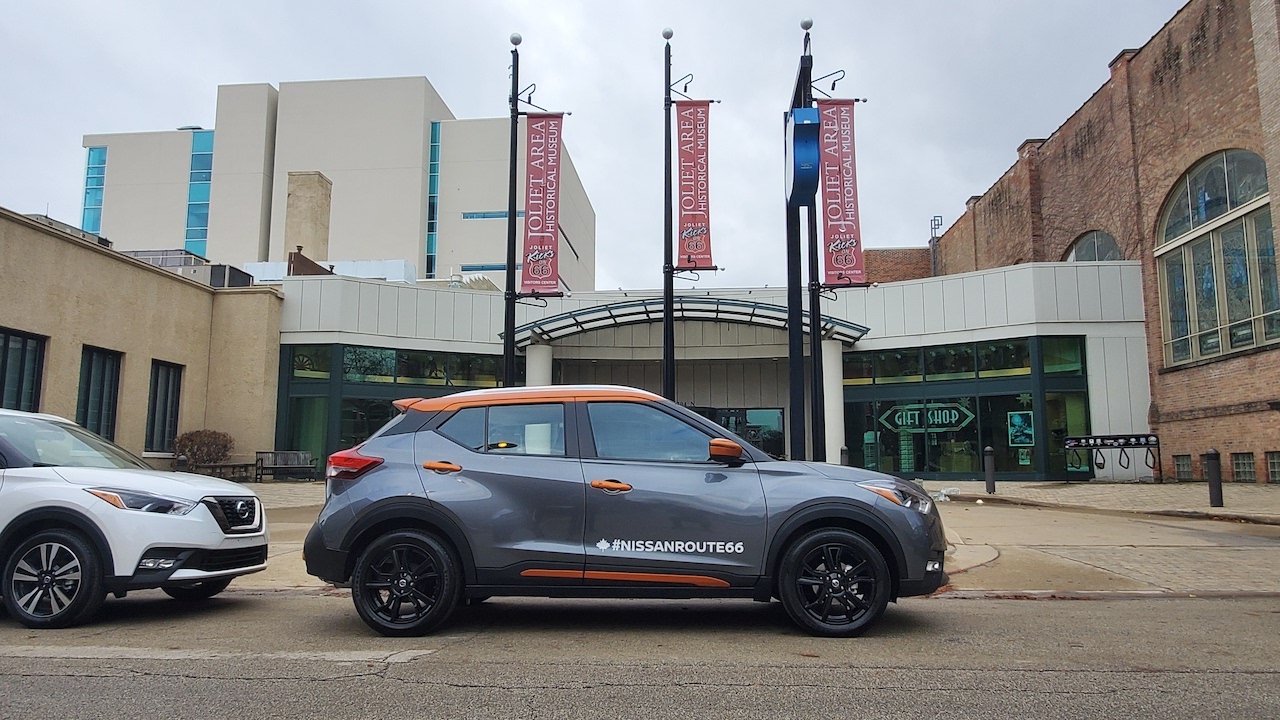 I wasn’t counting mileage (kilometrage?) during the journey but based on rough accounting I’d say I logged between 300 and 350 km behind the wheel of the Kicks on each leg.

As for the drive, it was a bit of a mixed bag. Like I said at the outset, the Kicks often felt like a fish out of water on Route 66.

During the times in which I drove it through more populated areas at speeds at or below 55 mph (89 km/h) on local roads when we were arriving at our nightly hotel stop (I drove the back end of the route two out of three times with the Kicks), it felt completely fine.

Power delivery and acceleration were acceptable, if not overly impressive, and the Kicks’ reflexes in terms of steering and general handling felt good at slower speeds, such as when lunging from one intersection to the next or coasting along in moderate traffic.

However, due to time constraints resulting from a fixed schedule, our Route 66 adventure also involved a lot of Interstate travel. I logged a lot of miles along I-55, I-44 and I-40 during my time in the Kicks and let’s just say that the cut and thrust of Interstate driving really doesn’t draw on the car’s strengths.

Because our group of 11 vehicles was travelling in a convoy, I often had to stomp on the accelerator to keep up with the train and, frankly, the 1.6-litre four had a hard time keeping pace. Oftentimes, an Interstate on ramp meant pinning the accelerator and hoping to catch up to the car ahead before hitting the rev-limiter and being relegated to a quarter-mile gap. 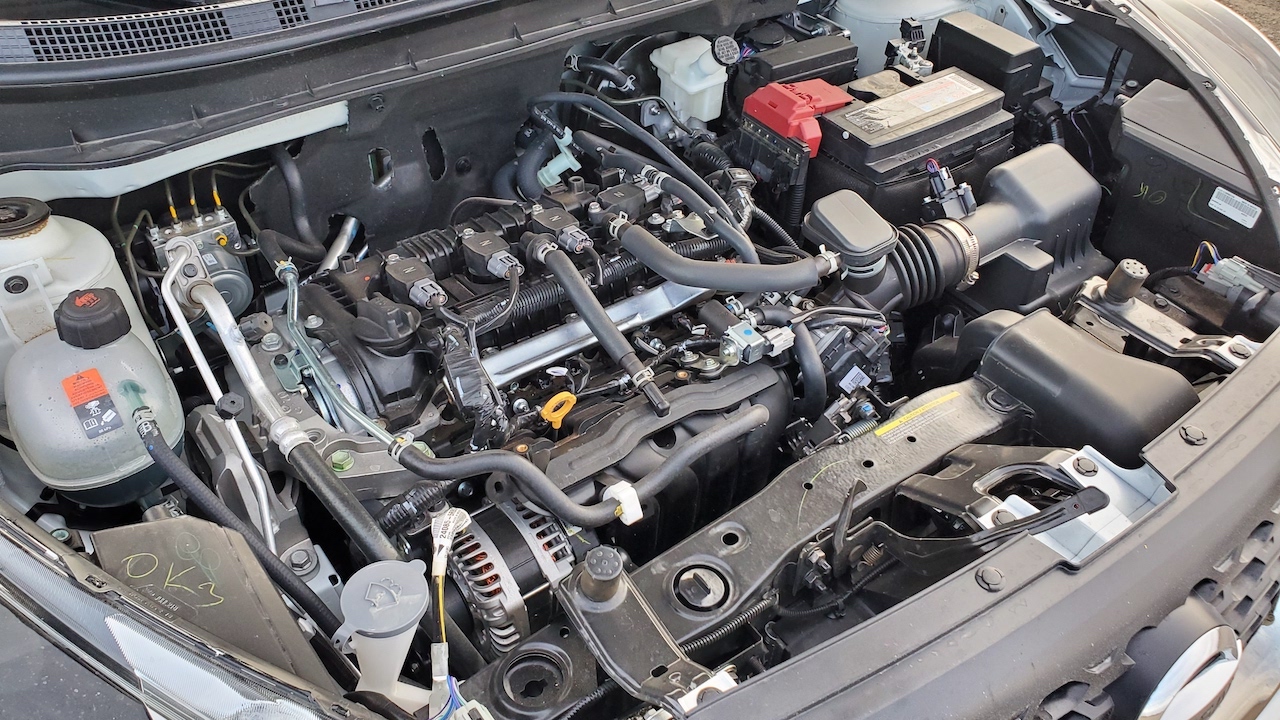 Crosswinds also hampered the Kicks at speed, as its high centre of gravity, brick-like profile, and lack of mass enabled the wind to act like a schoolyard bully and push the crossover around. I had a bit of a moment near the end of day one as I crested a hill on I-44 south of St. Louis and was met with a violent wind gust that nearly pushed the car on to the shoulder. Everything turned out fine, but let’s just say it sent a bit of a jolt through both myself and my drive partner.

Thankfully, a chase vehicle (Pathfinder) and in-car radios (and Google Maps!) had our backs, but Interstate travel was a real no joy situation in the Kicks.

On the upside, however, the Kicks SRs on the trip were exceedingly well equipped, and all cabins offered an impressive level of comfort and interior space for a car of its size. Several features impressed these eyes, among them the zero-gravity seats, the thick and grippy D-shaped leather steering wheel and the BOSE audio system with nearfield headrest speakers.

The Kicks easily had the best stereo of the three Nissans I drove on Route 66, and I dare say it’s the best one I’ve sampled in the class. Same goes for the zero-gravity seats, which were designed in conjunction with research done by NASA. The degree of articulation and support that these seats offer is impressive for a car in this class and price range. 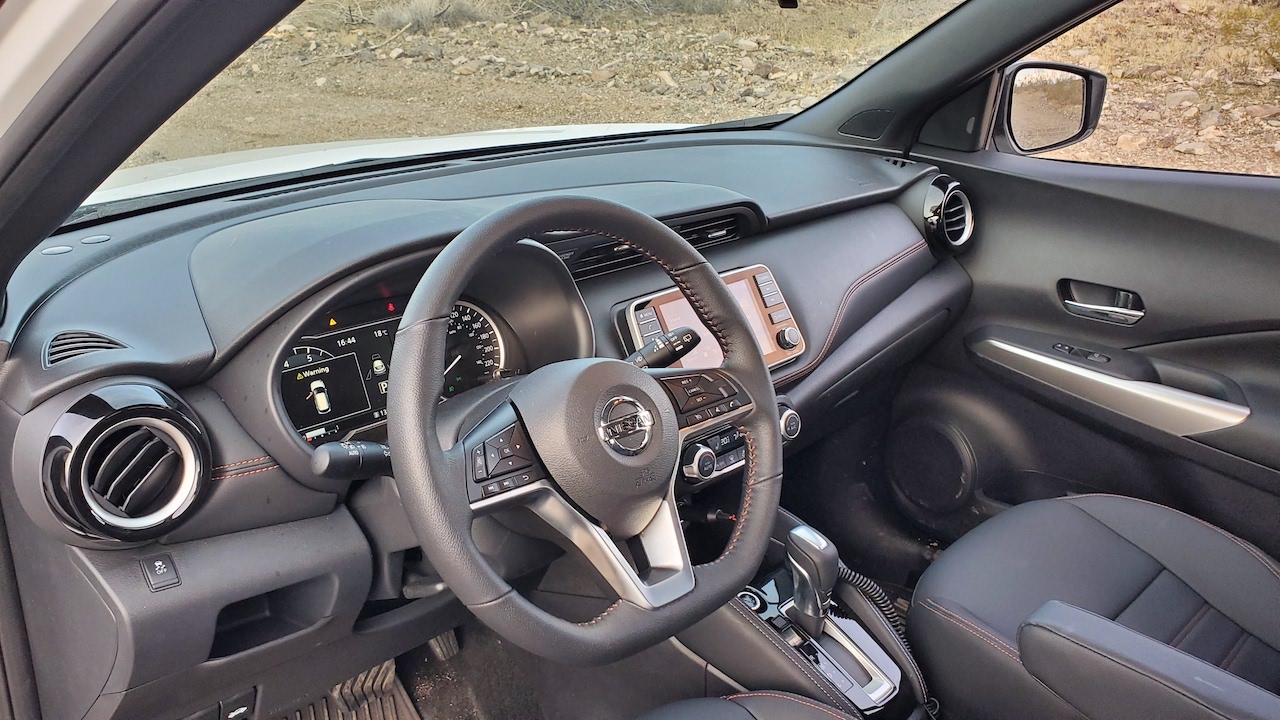 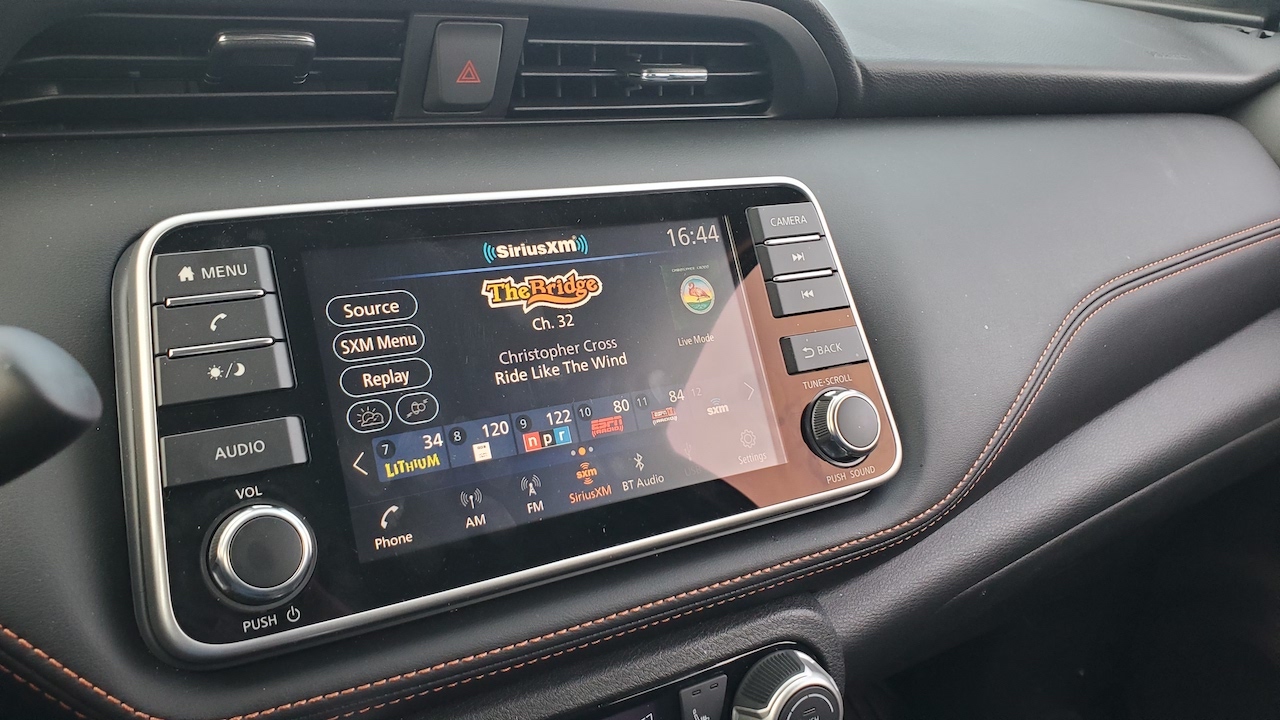 I was also impressed by the amount of space the Kicks offers. Not only is it among class leaders when it comes to legroom, headroom, and overall passenger space, but its cargo space (716 litres behind the second row) also impresses. We had to move our bags from car to car during the journey and I came away impressed by how much stuff we could cram into the back of the Kicks without having to put the rear seatbacks down.

Of note, Nissan’s ProPILOT Assist driver aid, which works in conjunction with adaptive cruise control, and is offered on other models such as the Altima and Rogue, isn’t available on the Kicks. Perhaps it’ll arrive in the future, which I think would be quite helpful, especially if it’s going to be used on a long-haul road trip such as Route 66.

I admire Nissan Canada’s decision to include the Kicks on Route 66, even though I’m sure those in charge knew it would be the least suited of the three to make such a long, Interstate-heavy journey.

I heard through the grapevine that several of my fellow journos lobbied to have it included as the name works so well with the highway, and on that score, I agree as I’ve done the same with my headline.

Apart from catchy plays on words, however, the Kicks is far from an ideal vehicle for long road trips such as Route 66. It’s a chore to drive on higher-speed, transport-clogged highways and having to pin the throttle constantly to keep up with the speed of traffic is tiring (and tiresome). 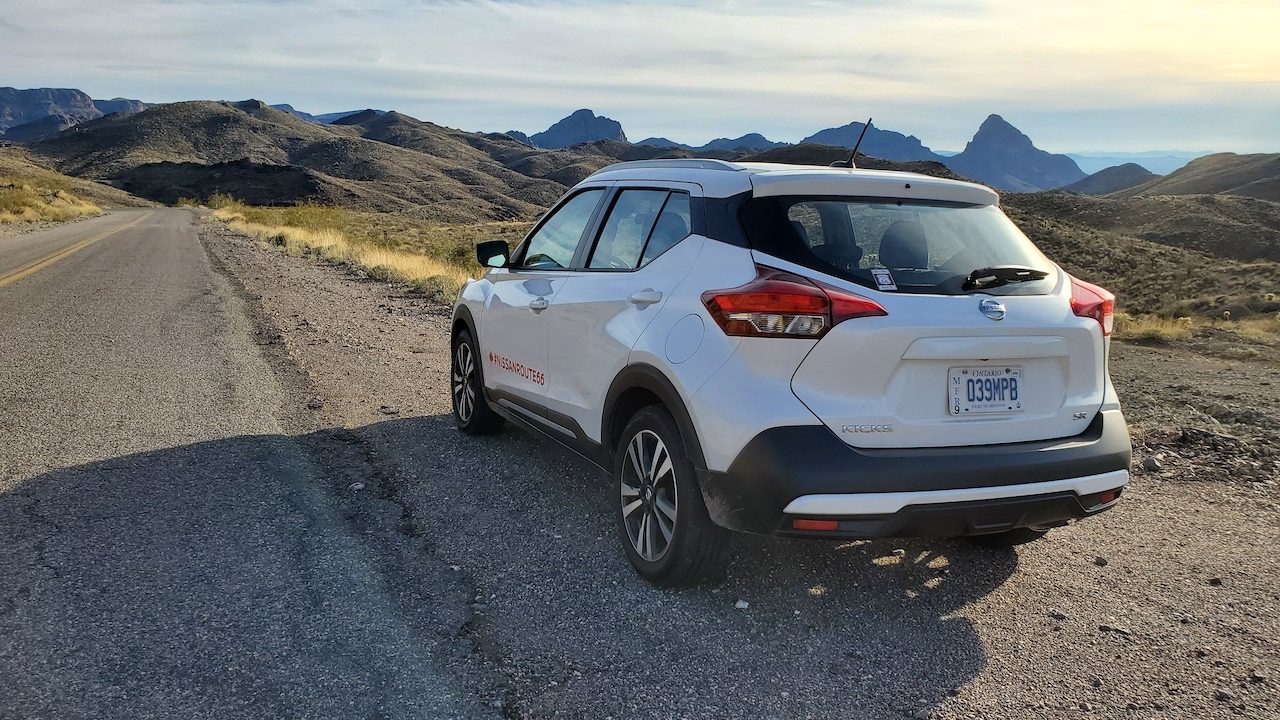 My suggestion is to opt for a larger, more powerful vehicle which can cruise along at higher speeds more comfortably and is less likely to be pushed around by wind gusts and leave the Kicks for city streets where it’s much more comfortable to drive as a stylish daily runabout.

As for those bigger, more powerful road trip vehicles, I’ll have more to say on two of them in my next Route 66 dispatch coming up soon. Stay tuned. 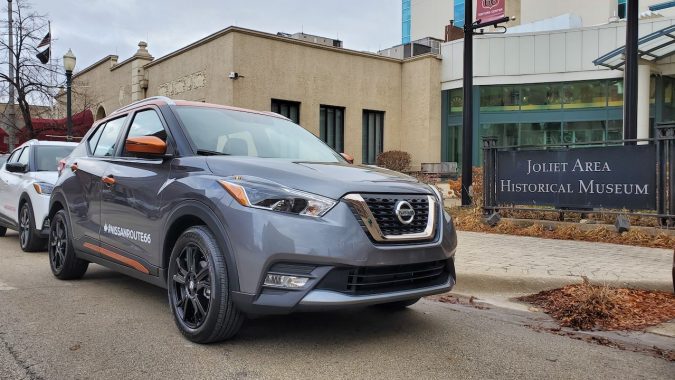 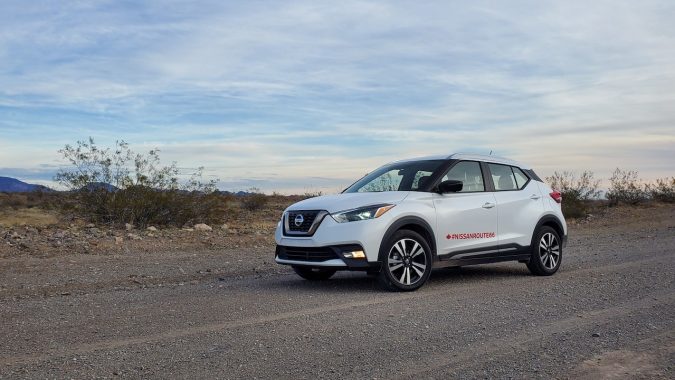 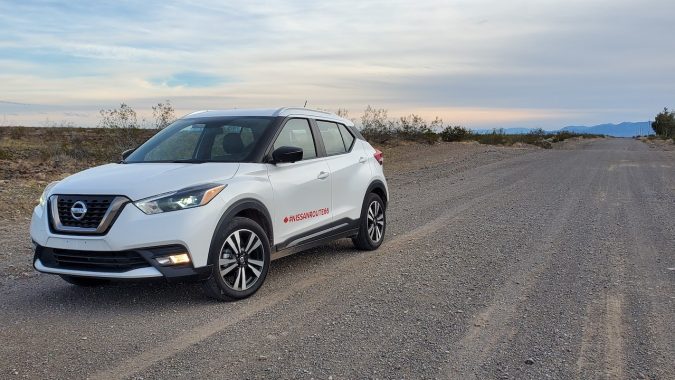 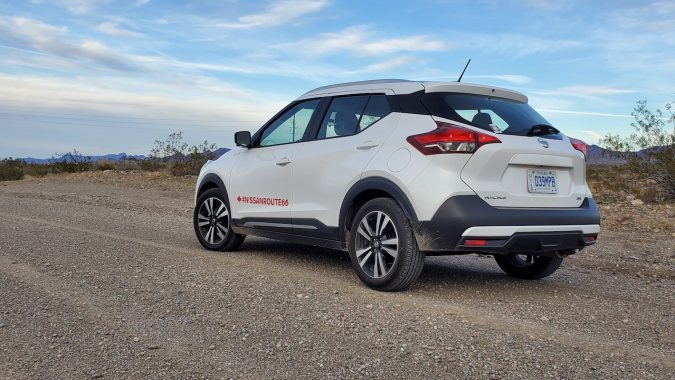 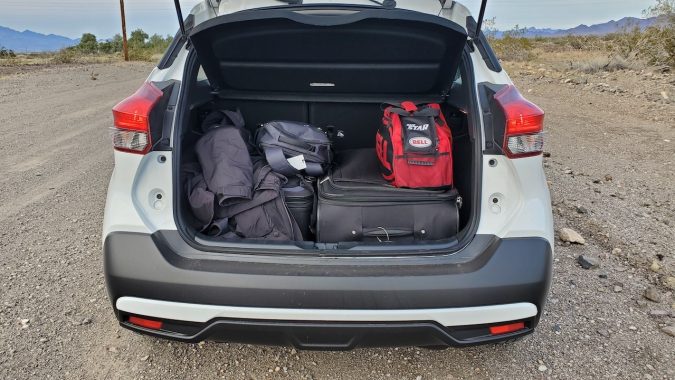 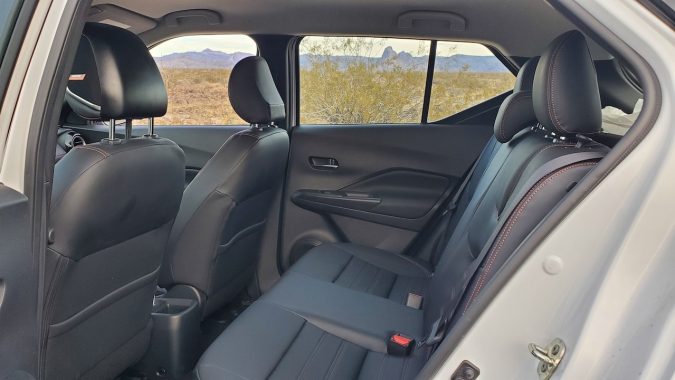 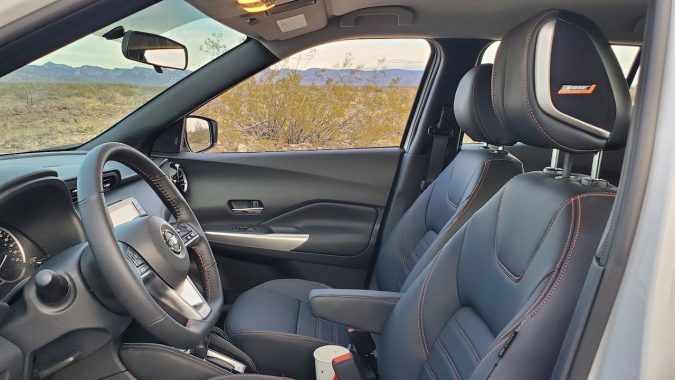 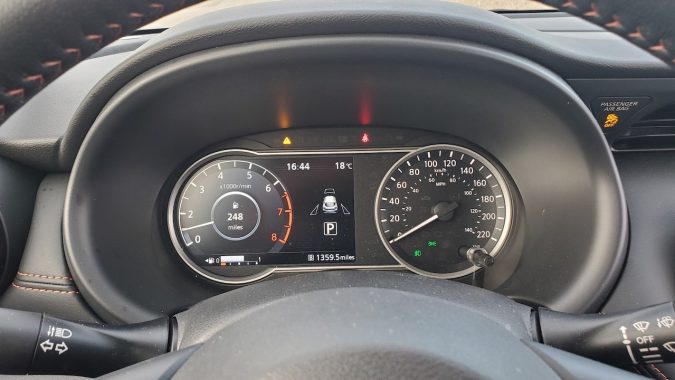 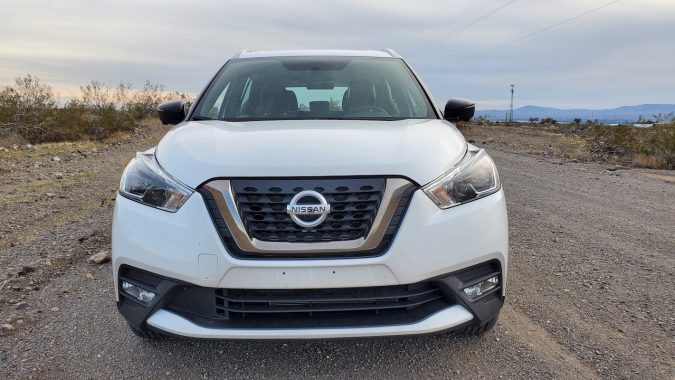 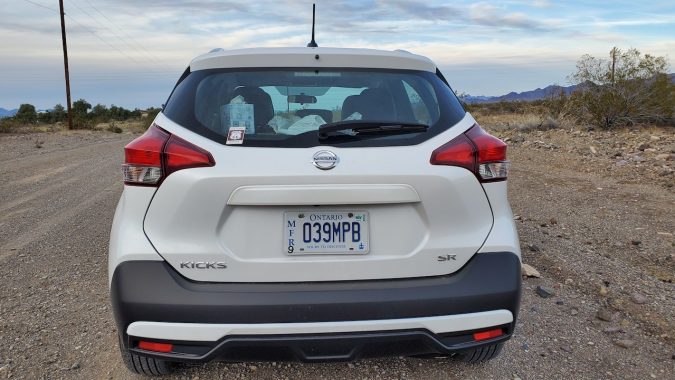 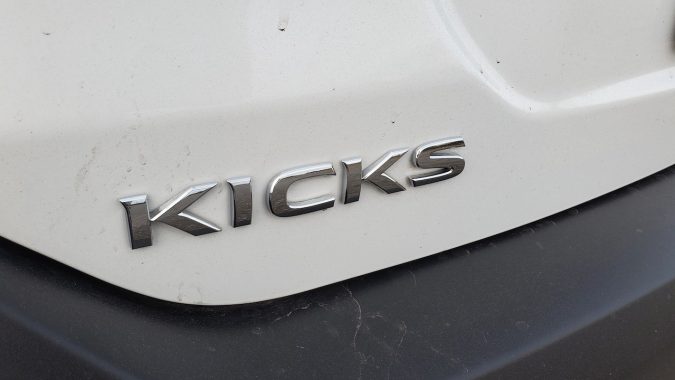 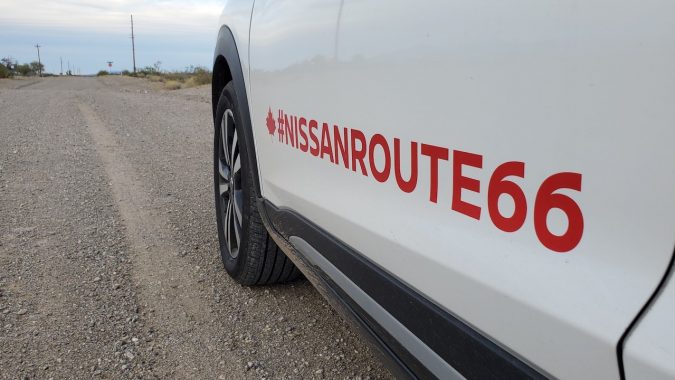