Now in its third generation, the Ford Escape (2017 Titanium model shown) remains one of the most popular compact crossovers on the Canadian market

I’d be hard-pressed to think of any manufacturer that offers as many ways to configure a compact crossover then Ford does with the Escape.

For instance, the 2017 Escape is offered in three trim levels each with its own specific engine with standard front-wheel-drive or optional all-wheel-drive, not to mention a bevy of packages plus eight wheel choices (based on model).

Ford did this when it revamped the Escape last year to meet the mushrooming Canadian demand for compact crossovers and the associated increase in utility/connectivity/luxury expectations of buyers. 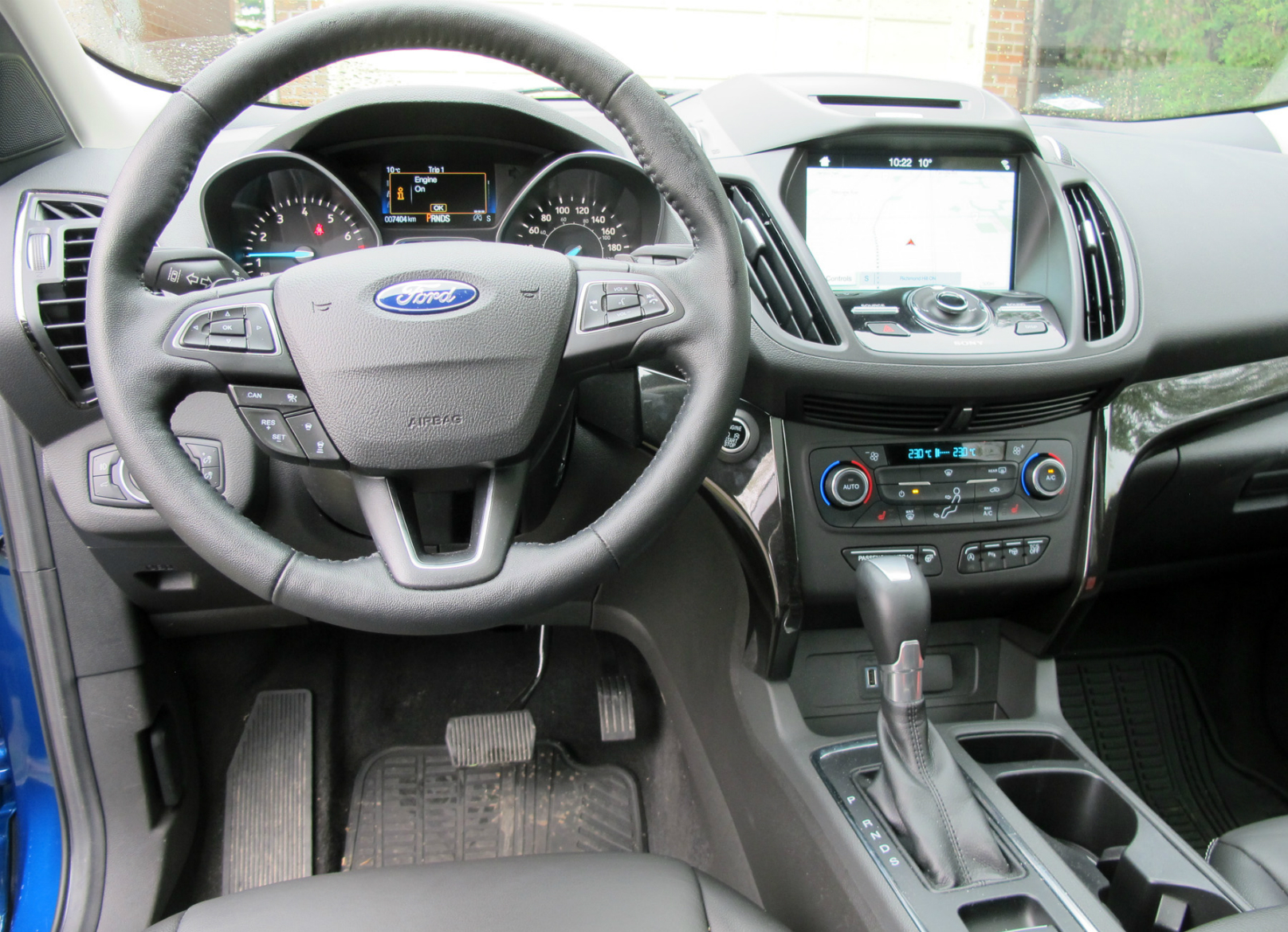 At the press launch of the 2017 model last year, Ford officials said SUV/CUVs were exceeding a third of sales in the U.S. and Canada with the prediction this will grow to 40 per cent by 2020.

There are three Escape trim levels, starting with the base S with a 2.5-litre inline four-cylinder producing 168 hp and 170 lb/ft of torque driving the front wheels through a six-speed automatic transmission. Fuel rating is 11.1/8.1L/100 km city/highway.

There are two new EcoBoost engines available for the mid-trim SE and top trim Titanium. Standard on the SE and Titanium is stop/start technology, which Ford says improves fuel economy by 4-6 per cent. 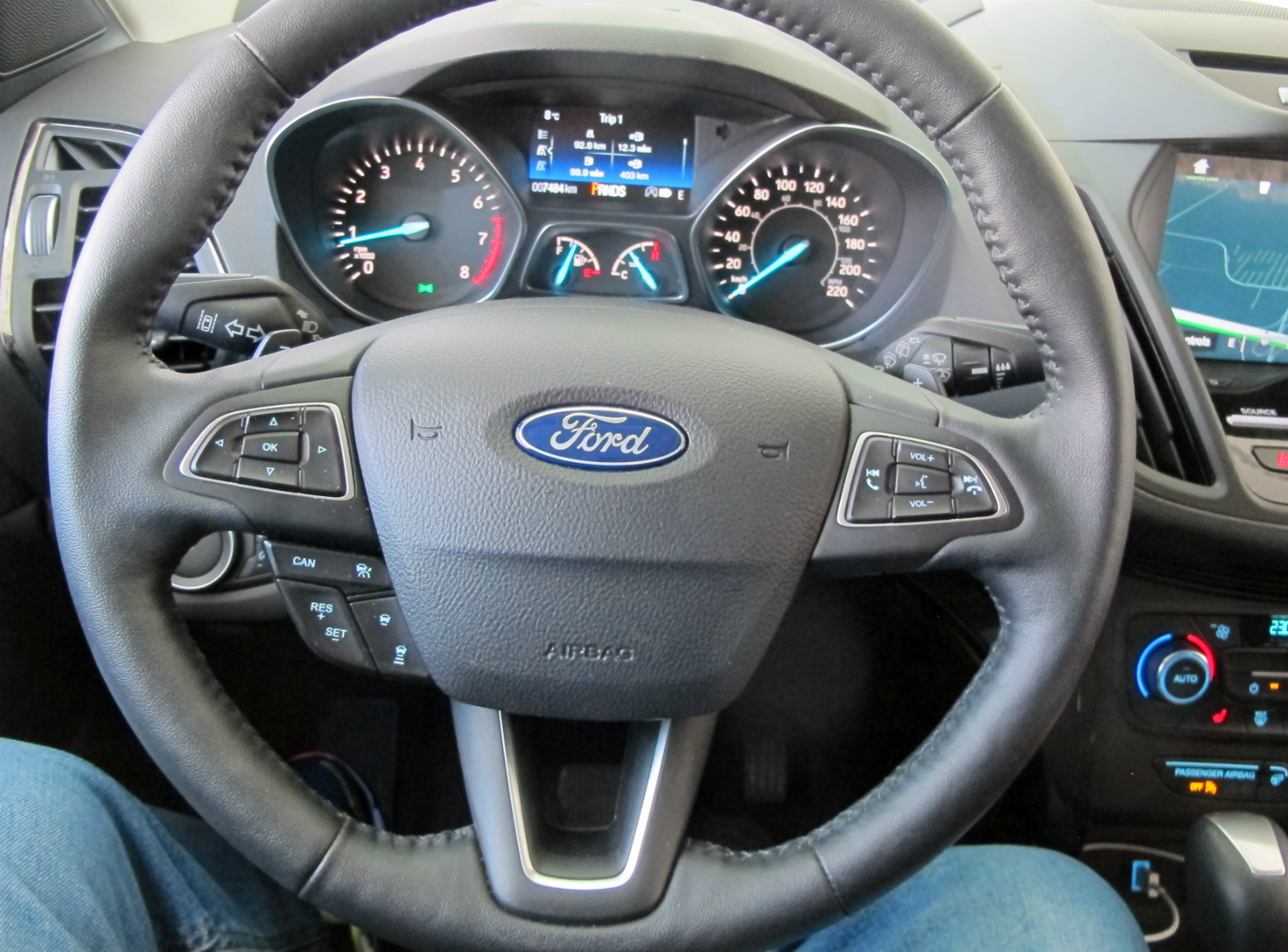 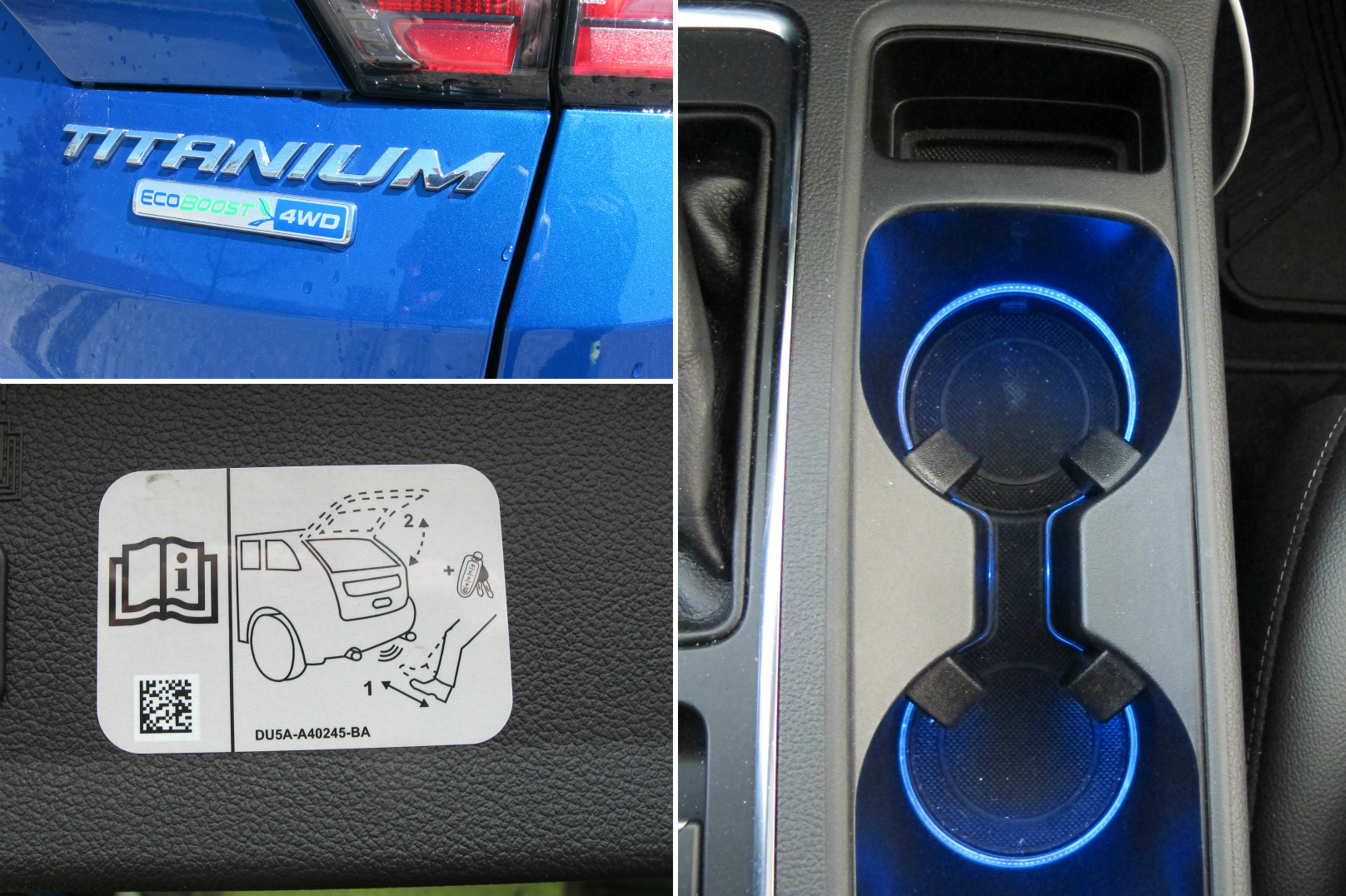 Approved tow rating is 1,588 kg (3,500 lb) and requires the 2.0-litre EcoBoost engine and the $500 trailering package which includes anti-sway control.

Ford revamped the 2017 Escape’s appearance inside and out with the focus on ergonomics — for example, the shifter is moved back to improve access to the climate controls with an added storage bin with USB port for charging cellphones.

The centre console gets cupholders (ambient illuminated on the Titanium) designed for all kinds of containers, bins in front and behind the cupholders, added storage, “swing-bin” glove box and an all-new steering wheel and easy-to-work buttons to control audio, adaptive cruise control and SYNC three-voice command systems.

The Escape now has Ford SYNC 3 that is a major improvement over the previous system and allows interaction by voice control or tapping on the upper centre stack screen. It also offers music search and control, voice recognition and SIRI seamless integration. 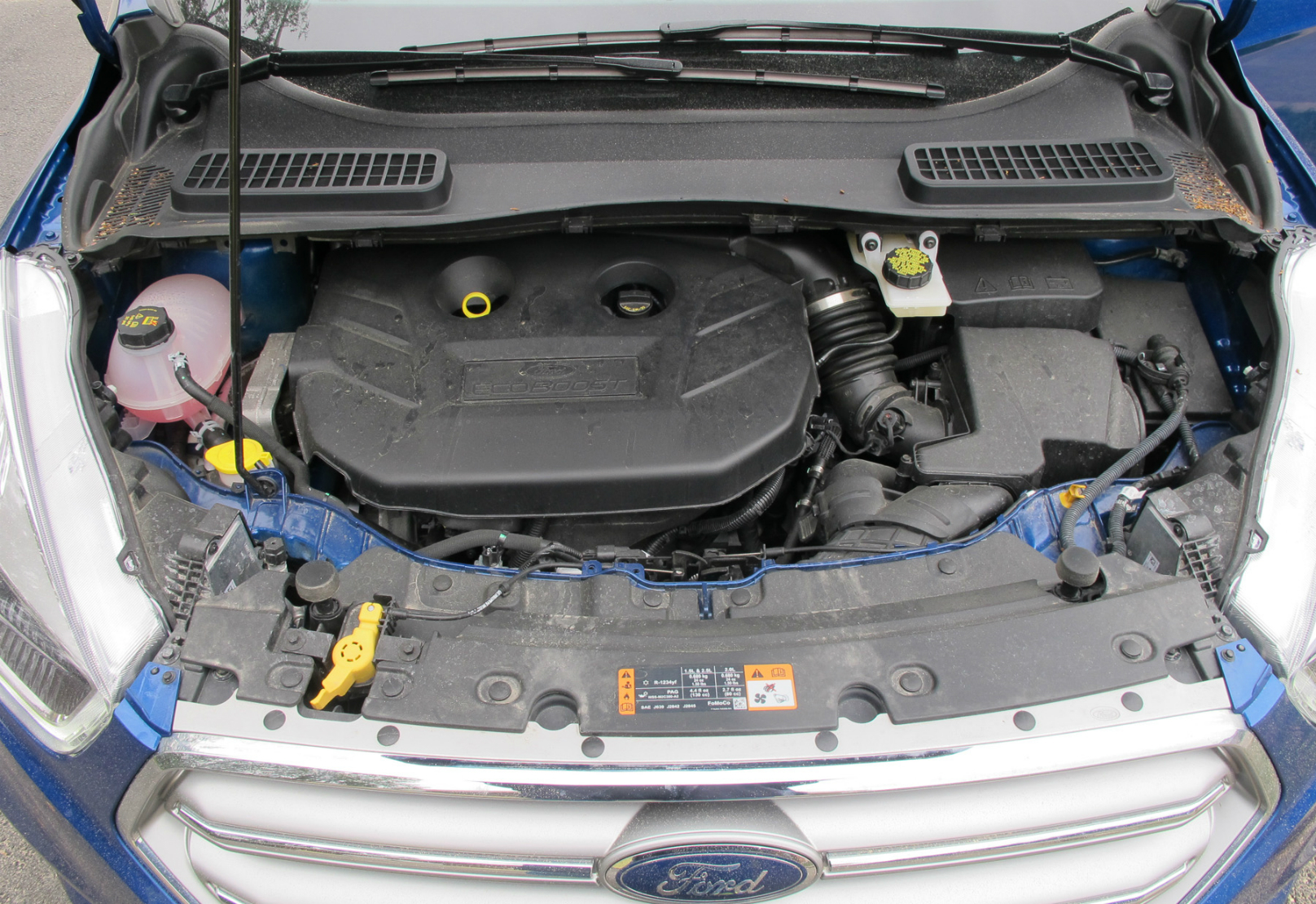 Walking up to it, the Escape is immediately recognizable as a Ford by its now signature grille designed by Ford styling director Moray Callum. It replaces the old “three bar” look and is a major improvement.

Get in and the sense of bigger than expected passenger volume is partly due to the higher ceiling, although it does not appear so from outside.

The instrument panel layout contains much of the same switchgear from the Focus hatch and sedan, not surprising, as the Escape shares the same platform. 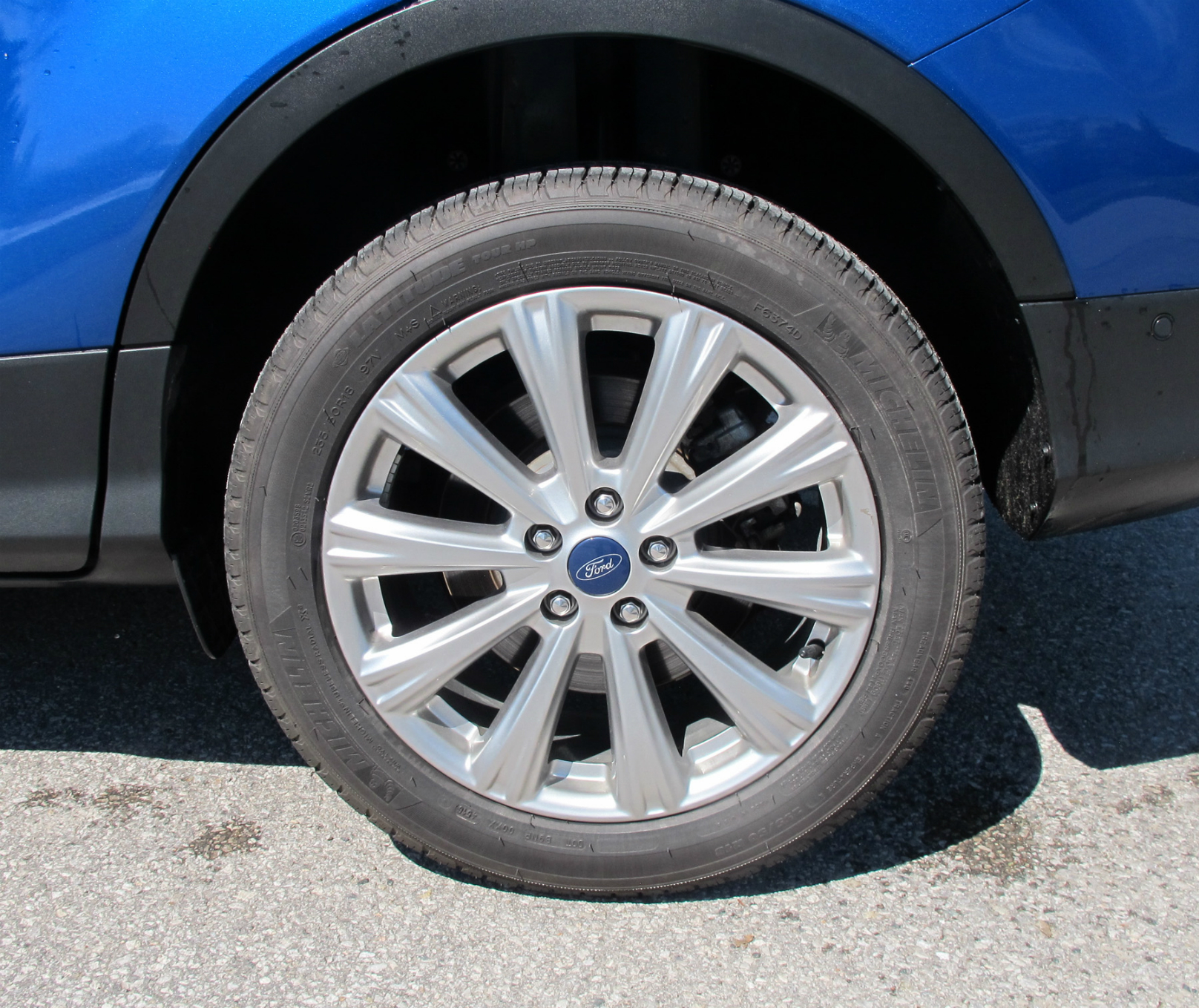 What I liked was the accessible USB port for my cellphone that was not shoehorned away in a cubbie where my big fingers couldn’t fit to plug it in.

Being a Titanium model, it was packed with amenities such as rear camera with sensors to help watch for cross traffic flow, which I recommend because the rear liftgate restricts rear vision.

On the Titanium I drove, the liftgate was powered and had a proximity function that lets you open it with a swipe of the foot under the rear bumper.

I put a lot of distance on the Escape in variety of conditions and over a variety of roads and it showed no vices.

The 2.0-litre punches way above its weight. For instance, its 275 lb/ft of torque is almost identical to the 3.7-litre normally aspirated V6 (278 lb/ft) found in some of Ford’s bigger vehicles like the Lincoln MKX mid-size SUV. 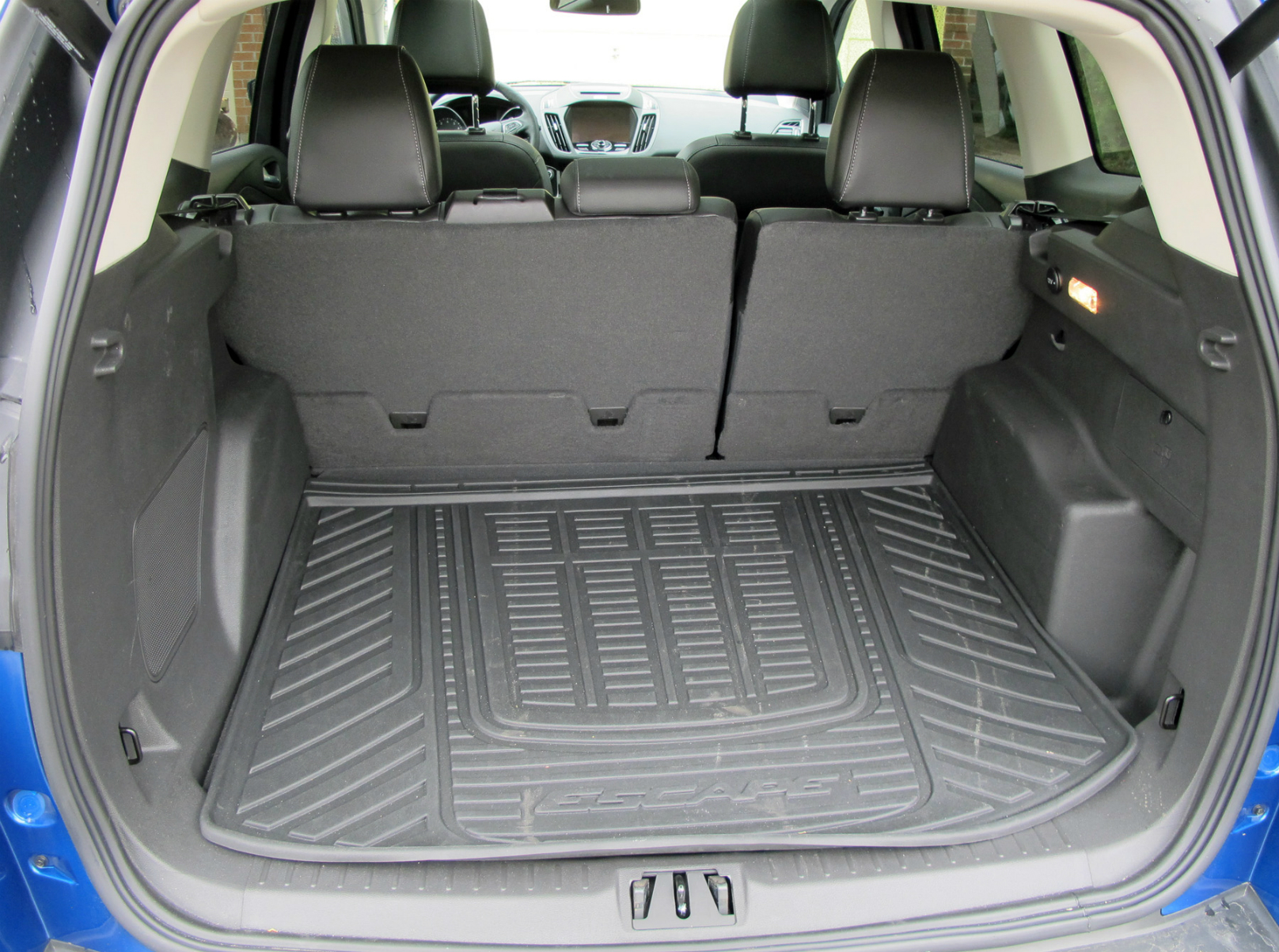 I also used the SYNC 3 navi/info system. All I had to do was key in the city/town, street name and number in one line and the system located it and set me unerringly on my way.

Over a week and more than 600 km, I could see how Ford, like just about every other maker in this segment, can’t rest and is constantly upping its game.

Drive something like the 2017 Ford Escape and you too will see why it is so attractive to so many in Canada. 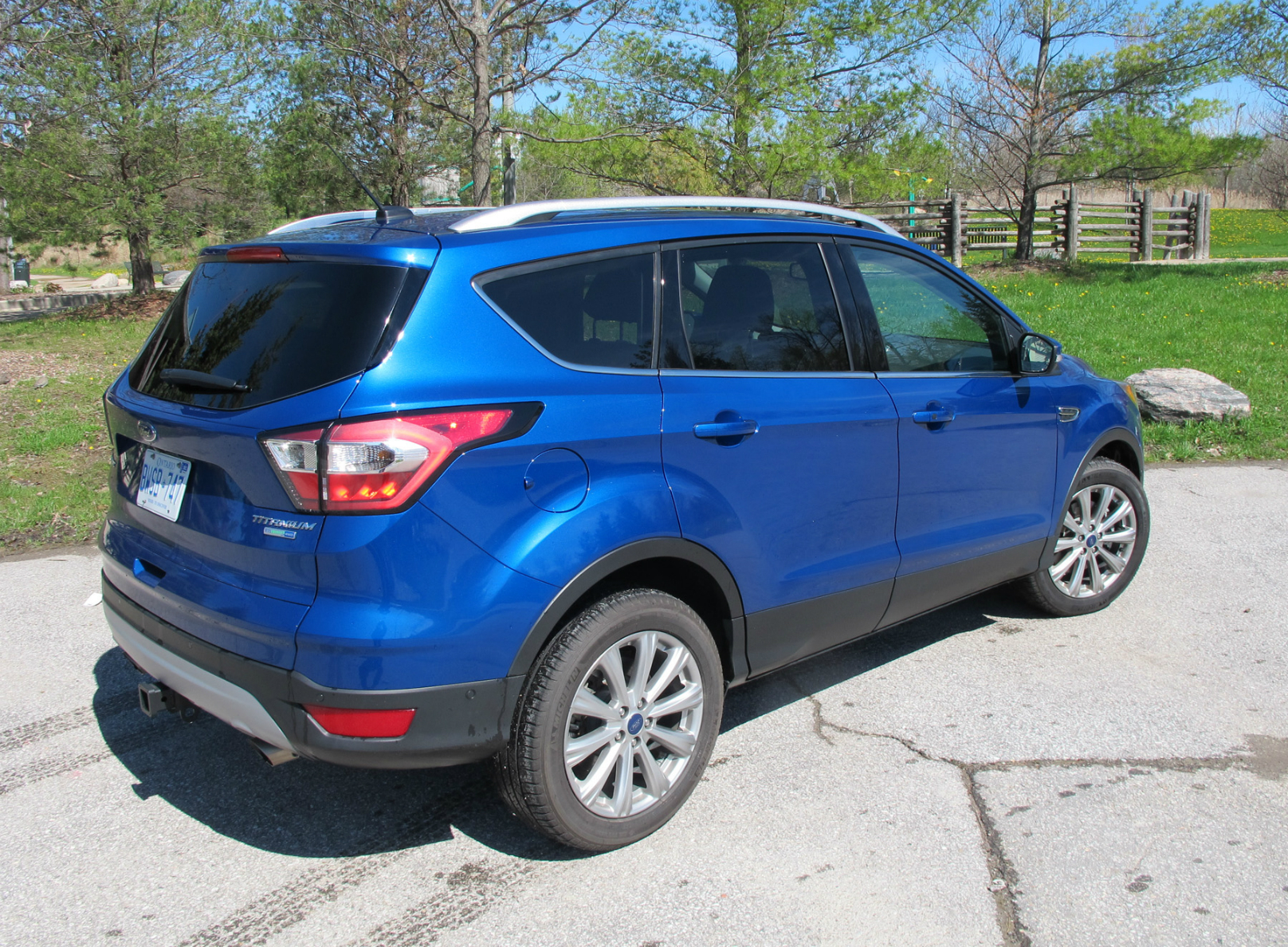