For 2018, the bestseller gets significant upgrades in styling, engines, transmissions and equipment.

It’s all pretty much trucks from the Manitoba border until you get to Vancouver.

And, increasingly so across Canada, as trucks (pickups and SUVs) now command more than half the market. I know, I know. I try …

In fact, the Ford F-Series line of pickups has been the bestselling vehicle, car or truck, for years in Canada.

Not to mention the bestselling pickup for 51 straight years in Canada, versus a mere 40 years in the United States, a fact Ford’s Canadian staffers delight in pointing out to their American colleagues.

F-Series is available in a bewildering array of body styles and trim levels, ranging from $30,499 for a 4×2 regular cab to a breathtaking $71,399 for the long-wheelbase Raptor Super Crew 4×4.

Probably the biggest step-change for the F-Series in its entire 100-year history occurred in 2015 when Ford went to an aluminum body, which carved as much as 435 kilograms out of the vehicle in anticipation of increasingly difficult-to-achieve fuel economy standards for trucks.

Initially, there was some resistance to this move amongst traditionally conservative truck buyers, aided no doubt by General Motors’ ads showing how a tool box falling into the bed could easily breach the light metal.

Then again, an admittedly not-disinterested friend of mine (leasing manager for a local Ford dealer) said they had to run that test some 40 times before they got the result they were looking for. Ain’t TV fun?

There have also been a few teething problems, what with Ford dealers having to equip themselves with the tools and the knowledge to repair aluminum bodies.

But the F-Series rebounded quickly and continues to lead in the only race that matters — the marketplace race.

For 2018, the F-Series gets some significant upgrades, in styling, engines, transmissions and equipment.

We came to Ann Arbor for a sampling. Understand that Ford could probably build an entire year’s worth of F-Series — that would be nigh on a million units — and never build exactly the same truck twice. 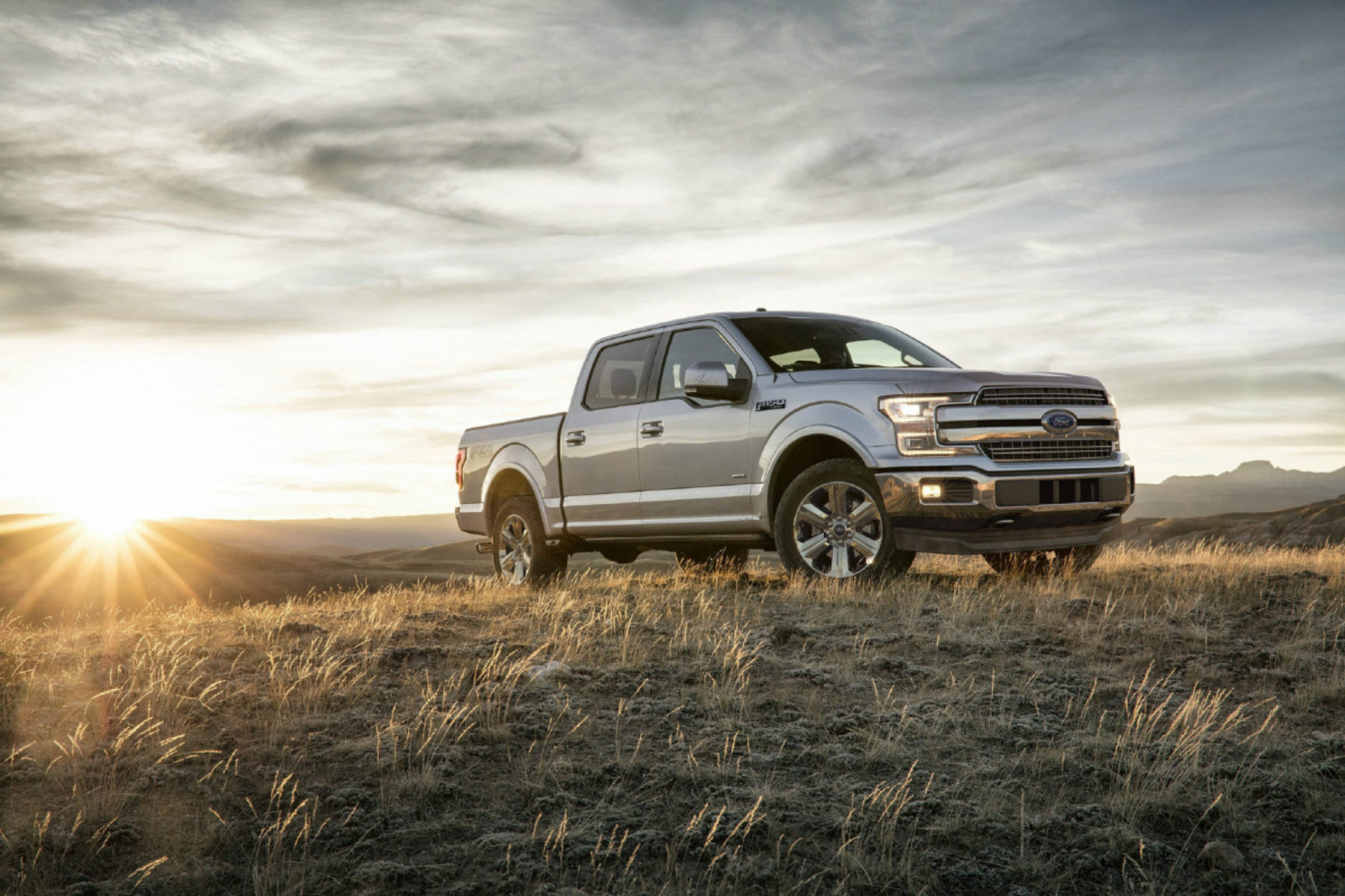 So, a single day’s testing can hardly hope to be comprehensive. Still, we try.

Sean Tant, Ford’s truck studio design manager, mentioned that F-Series is an iconic product for Ford, and his team had to deliver on the message of ‘tough and capable.’

The 2018 gets new C-shaped headlamps rather like those of the Super Duty variant introduced last year. There are no fewer than six different grille patterns, depending on trim level, new wheels ranging from 17 to 22 inches in diameter, new LED taillamps and three new interior colours.

Many other details await the trainspotters, but you’ll know it’s a Ford when you see it.

Chief among the mechanical upgrades for 2018 are new and revised engines, with the general trends including smaller displacement and more technology, notably increased application of direct-fuel injection, all in the name of equal or greater performance yet with reduced fuel consumption.

The 10-speed automatic transmission, introduced last year on select models, gets wider application, again in the name of better economy.

In fact, the only engine which still uses the old six-speed autobox is the heavily revised 3.3-litre naturally aspirated V6, downsized from 3.5 litres and equipped with direct- and port-fuel injection to produce 290 horsepower and 265 pound-feet of torque (8 and 12 more respectively than the previous 3.5). This is largely a fleet-sales truck.

Also Read: Down and dirty in the Ram Power Wagon

Speaking with owners of EcoBoost engines, some have complained that they don’t get anywhere near the advertised fuel consumption in their real worlds.

That’s a challenge for any turbocharged engine — when the power is there, so is the temptation to use it.

Back off the throttle a bit, and you should see your mileage improve.

Rounding out the engine lineup is the latest iteration of the naturally aspirated 5.0-litre V8, now producing 395 hp and 400 lb-ft, 10 and 13 more respectively than before.

Interesting that the V8 accounts for a significantly higher percentage of buyers in Canada — some 50 per cent — than it does in the U.S., where it’s more like 30 per cent. Ford isn’t sure why; it just is, and it points out that our markets are indeed different.

A 3.0-litre Diesel engine will join the party next spring. 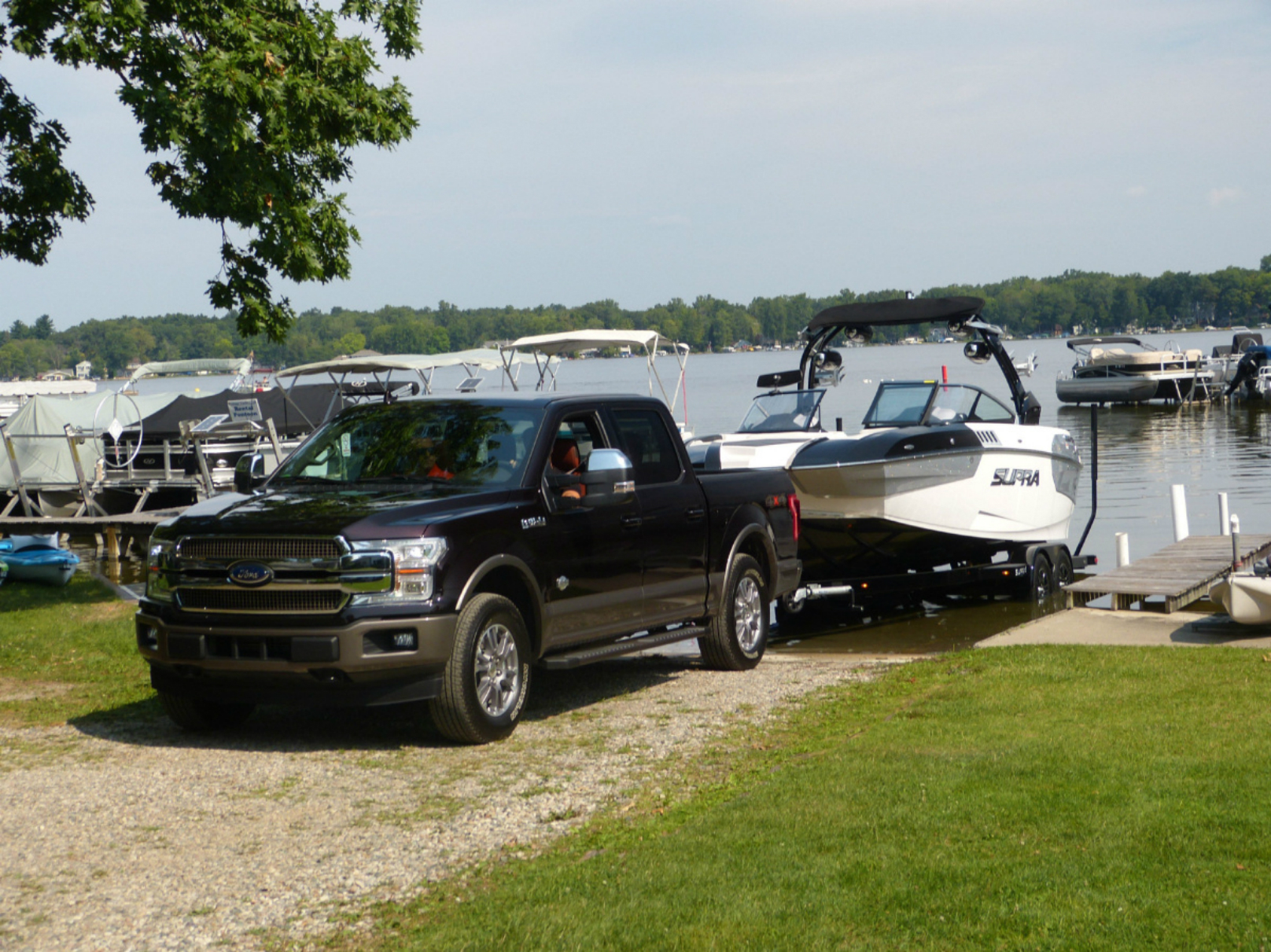 Among the more intelligent and useful applications of technology in the F-Series is the backup assistance system. Many modern truck buyers are new to this game and even experienced hands can be challenged when trying to back a trailer up, as in dropping a boat off at the ramp.

Ford indeed has a better idea. Activate the system; you then operate the gas pedal, and the truck helps take care of the tricky steering bits. Instead of you having to counterintuitively steer the truck the ‘wrong’ way to get the trailer to go where you want it to go, you operate a knob on the dash. Spin it right, the trailer goes right. Spin it left, the trailer goes left. You see it all happening, thanks to the clear rearview camera.

I used to be a dab hand at backing trailers up, but it has been a while. So, it took me a bit of concentration to forget the ‘old’ way and let the technology take over.

My driving partner had never backed a trailer up in his life before, and the new system made all sorts of sense to him. Steer it the way you want it to go, and Robert est ton once (hey, he was Quebecois).

Ford has retained some of the tidbits they got when they owned Volvo, including BLIS — the Blind Spot Information System.

Now in a passenger car, there is no such thing as a blind spot if you adjust your side view mirrors far enough outwards, as virtually every advanced driver training program in the world teaches.

With a big truck towing a trailer, things get a bit more challenging, because the rig is so long.

BLIS has been adapted for longer rigs with trailers, and can be if not quite blissful, at least helpful.

The 5.0-litre V8 with about a 1,300-pound payload in the back didn’t even seem to notice it. It probably even helped the ride quality because it kept the truck buttoned down.

A 3.5 turbo towing the boat on a trailer? Likewise.

I was most interested in how the smaller 2.7-turbo V6 would fare compared to its 3.5-litre brother. What are you getting in return for your pricier upfront hit and your ongoing fuel cost increase? Frankly, not a heck of a lot.

Sure, if you really stick your foot in it, the extra torque can be felt. But even towing a load, the smaller engine does remarkably well.

It’s been quite the century for the Ford pickup, starting from humble roots — shortly after the First World War, building a truck chassis and commissioning independent coach-builders to construct bodies on top — to the present day, when they can build a truck just for you.

Can millions of Americans be wrong? 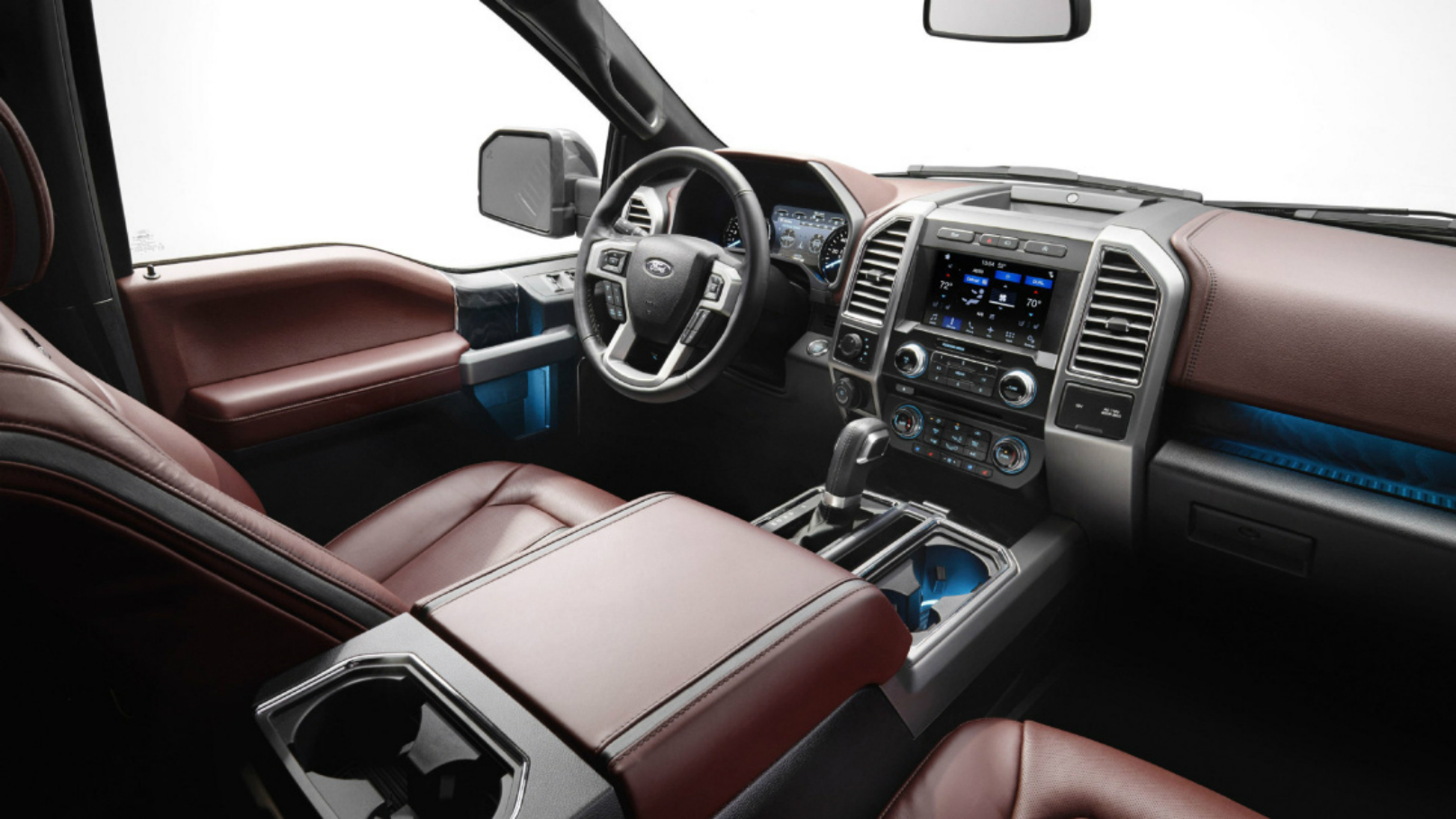