7 Series luxury for up to 7 in BMW’s first full size SUV.

Spartanburg, SC: The full size SUV market has been hit or miss over the years. Fluctuating fuel prices, an unstable economy and growing environmental concerns have made these beasts of burden slow sellers in most places—except maybe those with deep pockets like in the Middle East, where it seems that is all they drive.

Recently, however, the world has been slowly ditching the traditional sedan in favour of taller, more upright boxes better known as CUVs and SUVs. And with combustion engines getting more efficient and more powerful than ever before, the big boys are making a comeback.

The Lexus LX and Range Rover, two of the originals, have enjoyed a large share of this lucrative segment, gaining a fan base of stalwart supporters in the process. Likewise, Cadillac’s Escalade and the Mercedes GLS have also seen a sales resurgence, as more and more affluent customers look for a bit more space and utility in their daily driver.

Largely and strangely absent has been BMW. Seeing three generations of success with its X5, they have shown little interest in entering this arena with the other players. That is until now.

Unveiled at last year’s Frankfurt auto show and more recently at the temporary luxury pavilion in downtown Toronto , the BMW Concept X7 iPerformance hinted that the brand had perhaps caved and was indeed going to build a three-row luxury behemoth to satiate the needs of everyone that asked.

Not sure how many people actually asked, but I recently found myself in South Carolina somewhere near BMW’s sprawling Spartanburg production facility staring down the gigantic nostrils (better known as kidney grills) of the new BMW X7.

If the past is anything to go by, we know that BMW concepts are loosely disguised versions of the real thing and that save for a few changes like outrageous wheels, hand carved tires, and intricate side mirrors most of what you see will make it into production.

Just like those gigantic grills, love ‘em or hate ‘em, peeking out from under a fully camouflaged pre-production BMW X7.

How they integrate into the rest of the car is a bit hard to tell, and probably what they were going for with the camo wrap and all. I can tell you, as you’ll see from some of the pictures that follow is, that big as they are, they do fit the proportions of this full size truck. 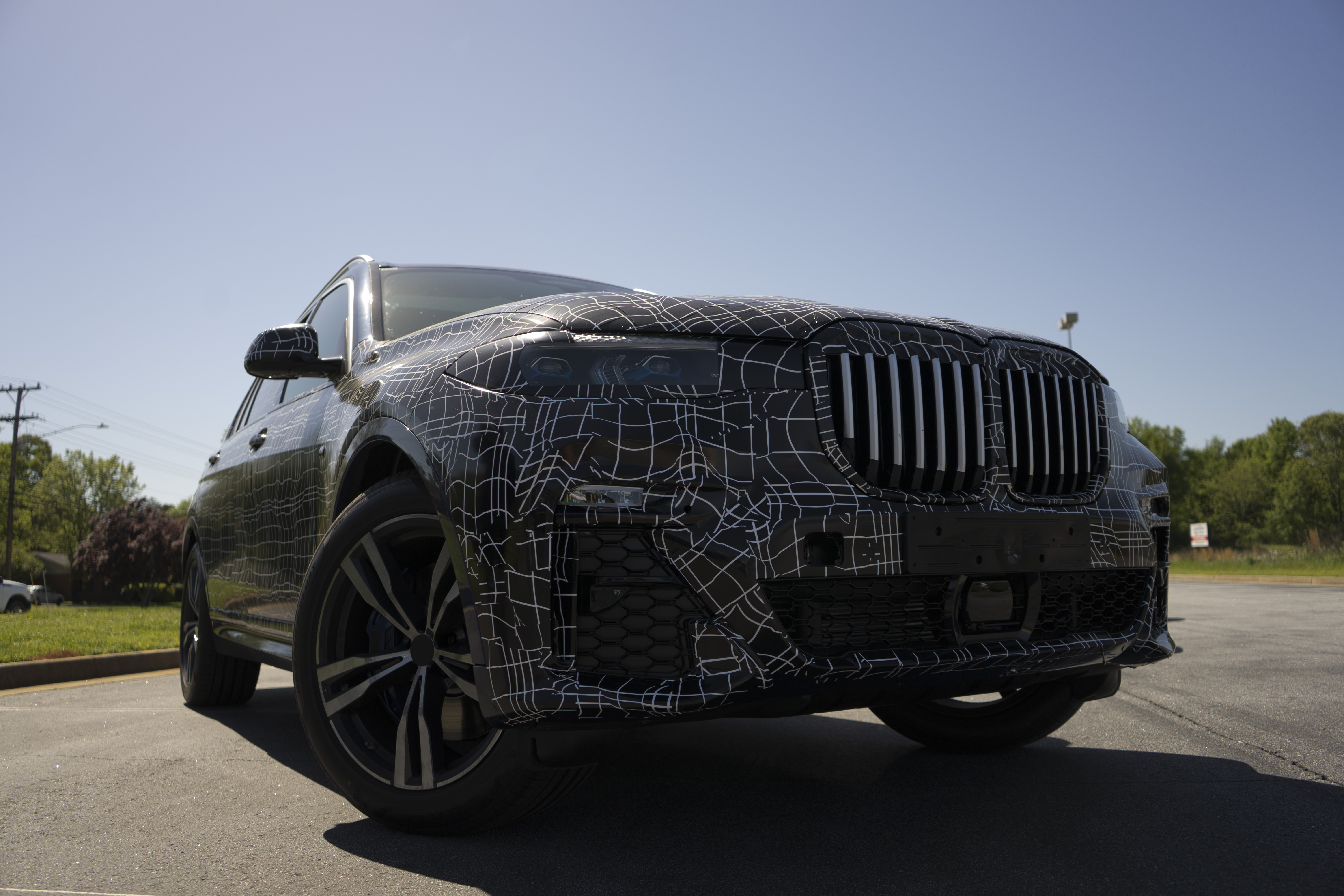 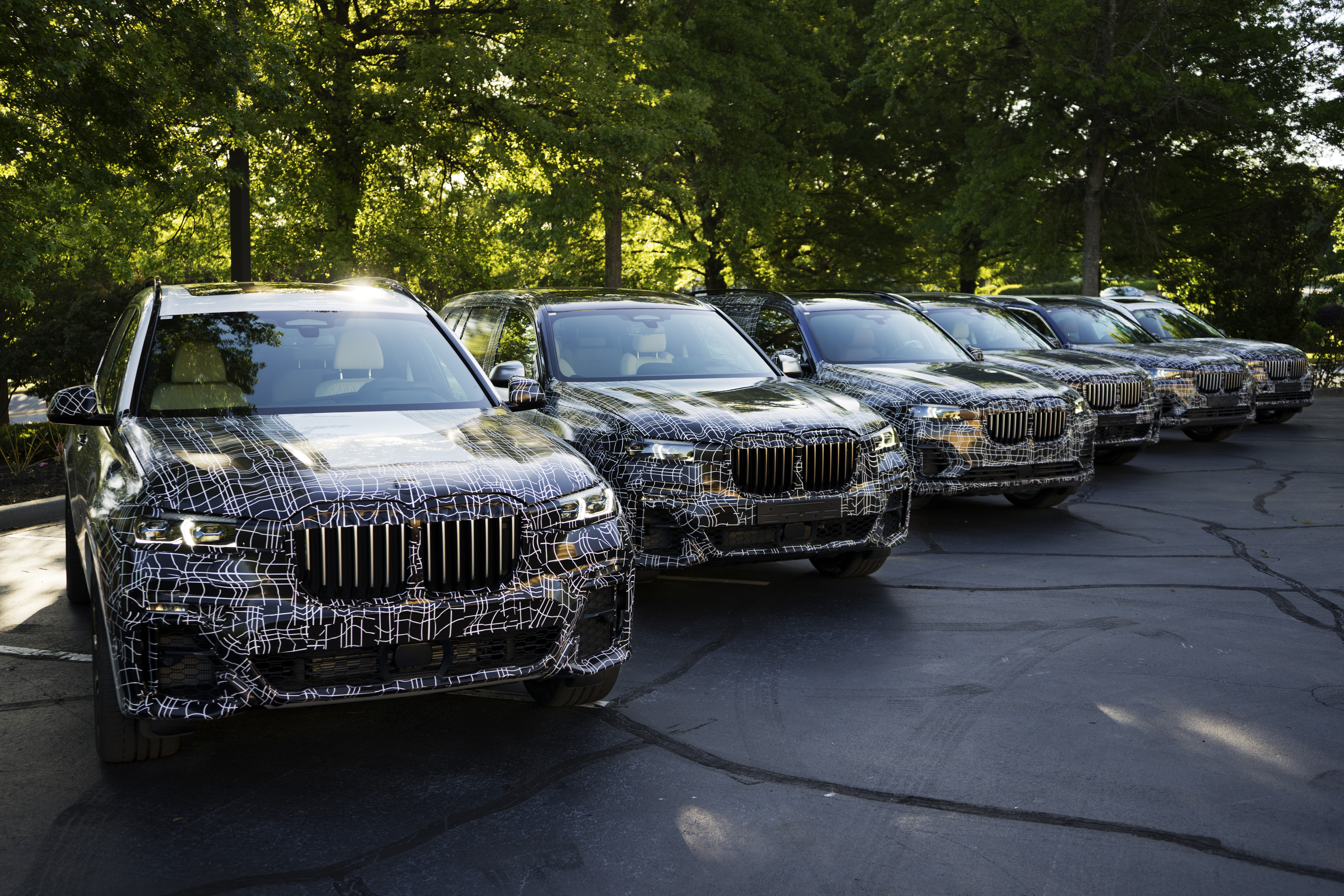 At 6 feet tall and standing beside the X7, I feel small. The roofline is at least an inch over my head. I would not want to be brushing the snow of this thing, but then again I wouldn’t want to be that driver blasting an ice sheet off my roof onto some poor guy’s windshield behind me.

There was a product expert on hand to answer any questions we asked, but, really, he was probably just there to make sure we didn’t start instagramming the crap out of the largely felt covered interior, or take this likely rare prototype for a joy ride on some of South Carolina’s finest back roads.

While we didn’t get much to go on from the experts, the following is what I can tell you:

Immediately it feels like a BMW. Responsive, sporty, and in the 6 cylinder versions I was in, growly. Maybe a bit too growly, as this is one quiet interior and the exhaust drone was constant. It’s not an unpleasant sound and I had no idea if it was an M-performance model or variant, but in a vehicle of this class it was a bit out of place.

The ride quality was very good, with almost no road imperfections disturbing the occupants and even in sport mode the X7 remained comfortable. It was a vehicle I would gladly spend time in, effortlessly covering vast distances.

The engineers tell us that they were gong for 7 series levels of luxury and while the ride might not be as serene as that benchmark, the tall-riding BMW holds its own.

I entered a highway on-ramp (in sport mode) and, as they say, put the pedal to the metal. The grip was immense, body roll minimal, and that feeling of tipping over which some big SUVs are notorious for when pushed, non–existent. The 8-speed ZF used in nearly all of BMW’s vehicles sees duty here and cracks off shifts with precision and alacrity.

For something weighing in at about 2.3 tons, this is impressive. It feels a lot like the smaller X5 and that’s saying a lot because an X5 does not shy away from corners.

The standard xDrive has also been updated, and all they would tell me is that there is no fixed bias. The torque split is constantly changing depending on the driving conditions and the driving mode selected. It is a similar system to what is on the new M5, although it cannot disconnect the front wheels like its cousin for a true RWD mode.

Does it do the off-road thing?

For the first time ever I can confidently say that it does; BMWs traditionally not fairing well in this area. Riding on optional air suspension on all 4 corners the X7 is capable of adjusting its ride height on the fly via a toggle switch on the centre console.

Allowing for up to 40 mm of increased height when off-roading the X7 easily negotiated a tough course designed to challenge a vehicle’s approach and departure angles and would probably make short work of any lesser SUV’s fragile underbody. It can conversely lower its ride height by 40 mm to make it easier to get in and out. 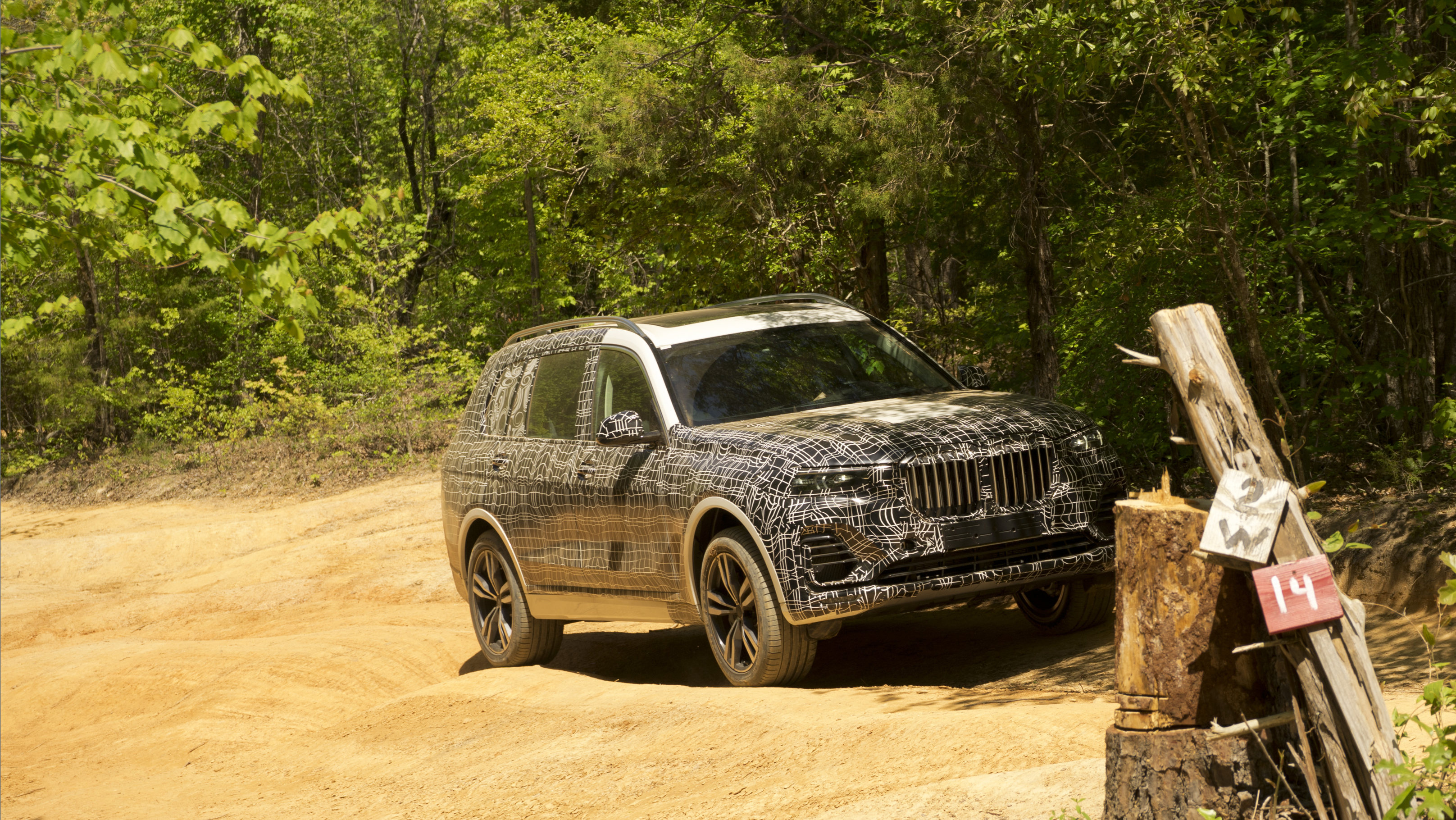 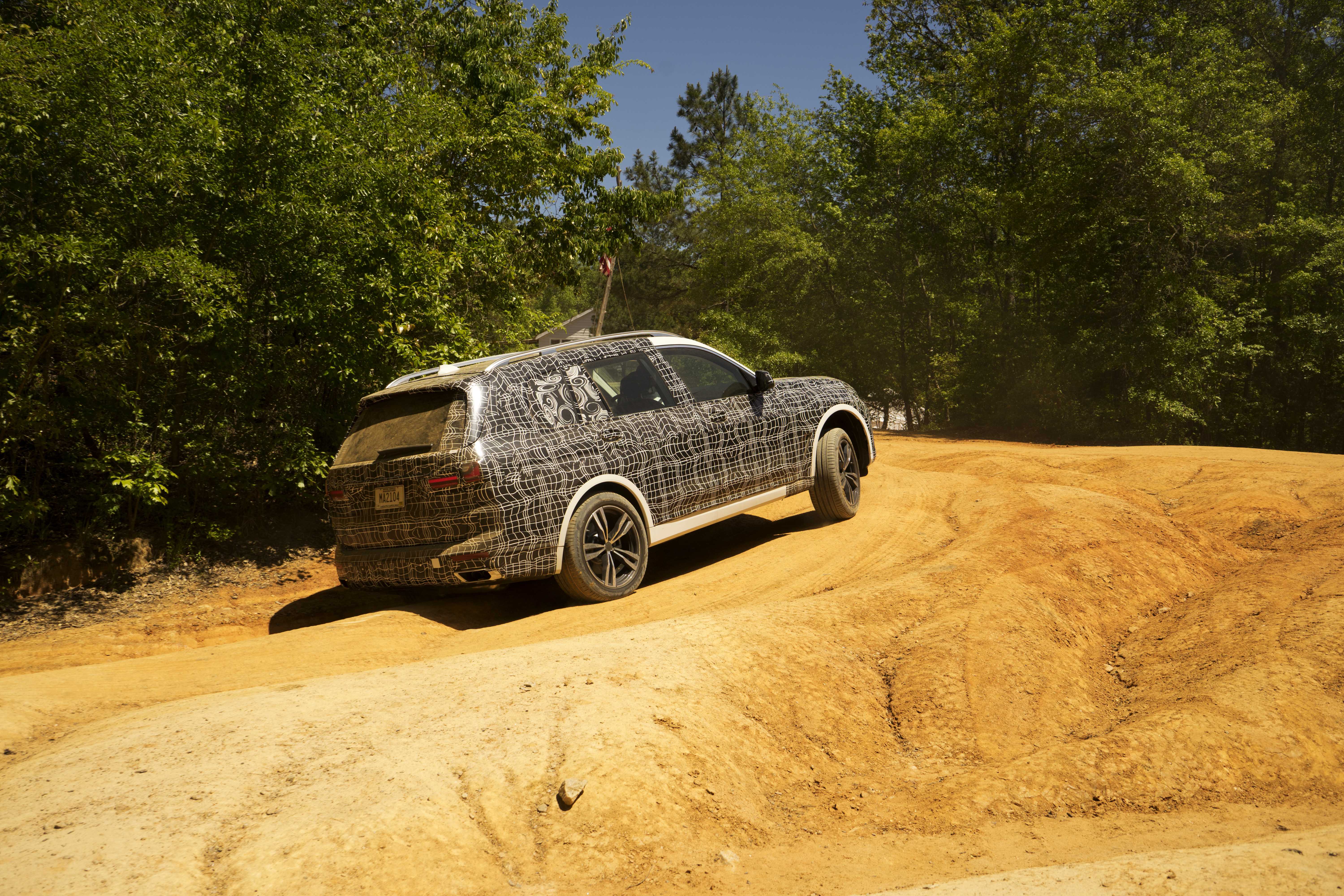 Equipped with an optional off-road package the BMW X7 comes with skid plates, hill descent control, an electronic diff lock and an appearance package that will help distinguish it from lesser models. There will be a range of large wheels, topping out at 22 inches on the high-end models and wearing 315 mm wide rubber on the rear.

While I personally wouldn’t be comfortable taking such an expensive vehicle so far into the wilderness, the capabilities of this new Bimmer SUV exceeded my expectations.

With a brand new model, comes a brand new interior and what looks to be the start of a new design language for BMW.

From what I could see, some of the changes here mark the most radical departure from their usually conservative designs.

While still not as “boudoir” as a Mercedes interior, the shapes are more organic and there are far less buttons cluttering the dash. The iDrive screen has grown to 12 inches and is integrated into another screen that now takes the place of the traditional instrument cluster. The gauges are completely new, the iDrive interface (version 7.0) is new and the start button has been moved from its traditional location on the dashboard to a spot beside the new carved glass gear selector on the central console.

The second row of seats can be ordered as a bench or as individual thrones. Both feature a full range of adjustments that ensure passengers are coddled. The third row also has a usable amount of room, about the same as a Cadillac Escalade, but might get a bit constraining for taller passengers on longer drives.

It has lasers for headlights

Yes, it has real lasers masquerading as lighting devices. They will be an expensive option and unfortunately our North American lighting standards are woefully out of date, and the full power of these brilliant headlights have been turned down for our shores. So it might not be the most economical of choices on that build sheet—they do look sweet though.

We didn’t get many details on the specs but we do know there will be two X7s sold in North America to start. An X7 40i will be powered by a 3-litre turbo straight 6, producing around 350 hp and the 50i will pack their newly redesigned turbo V8 that should pump out a minimum of 450 hp. Also on hand was a diesel version that will probably not make it to our shores, and that’s sad because it’s such a good engine (currently seeing duty in the X5) and would be a very economical choice in a car that’s anything but.

If it weren’t for all the camo inside and out, it would be difficult to tell the difference between this vehicle and a full production model. There were no rattles or squeaks, barely any wind noise, it drove brilliantly, and took everything we threw at it with aplomb. 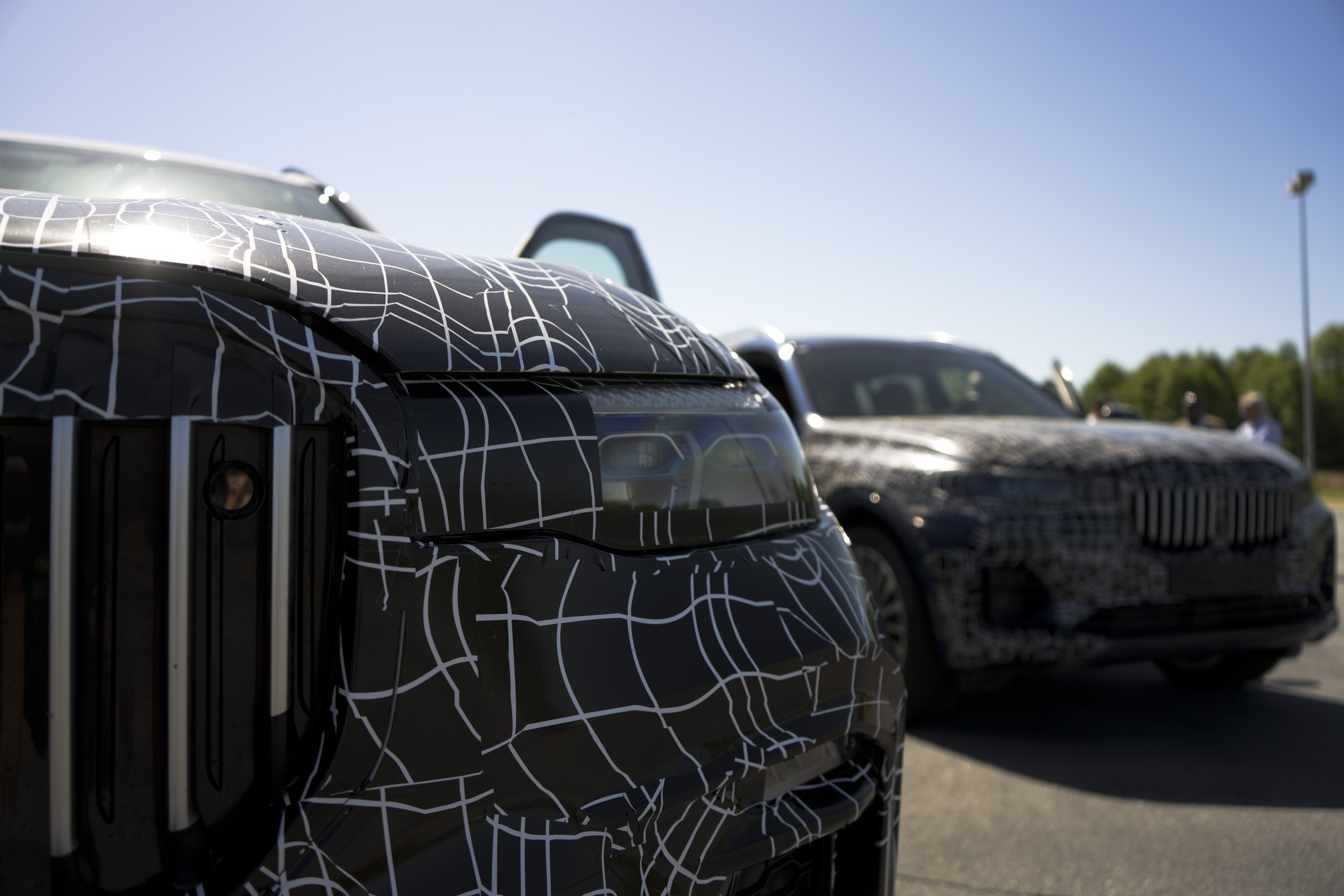 BMW might be late to this party, but they have a devout following and are a brand that really needs no introduction. Even starting in the $100,000 range, I don’t foresee them having too many problems moving these new X7s. That is unless people fall out of love with SUVs again, but that’s not very likely.

Expect them to start arriving in early 2019. We will report with more details as they become available. 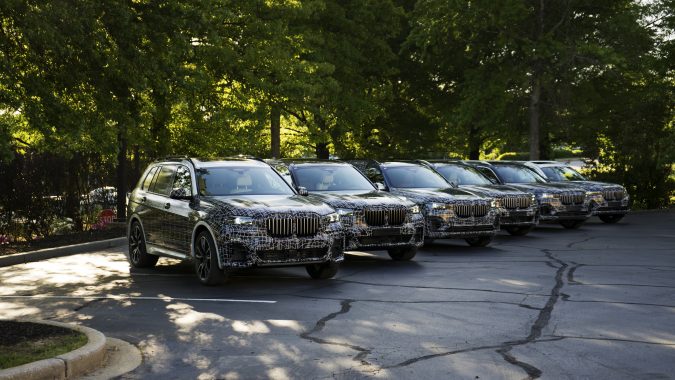 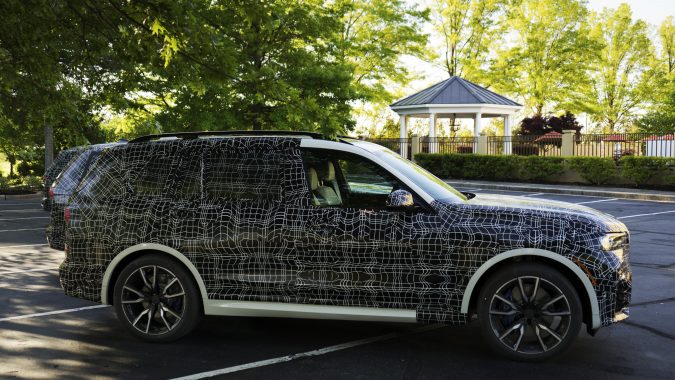 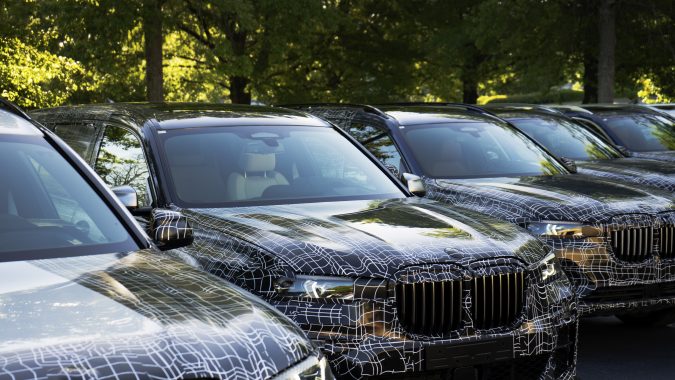 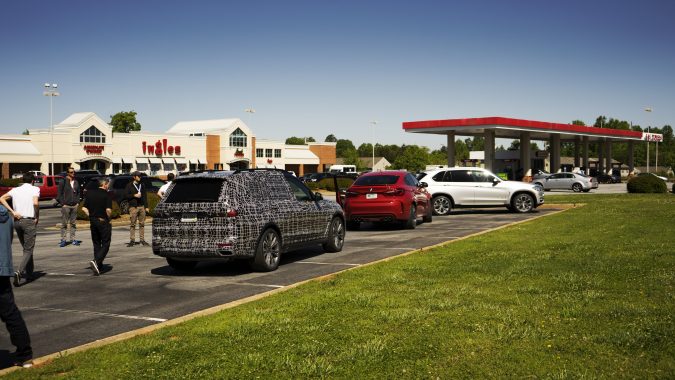 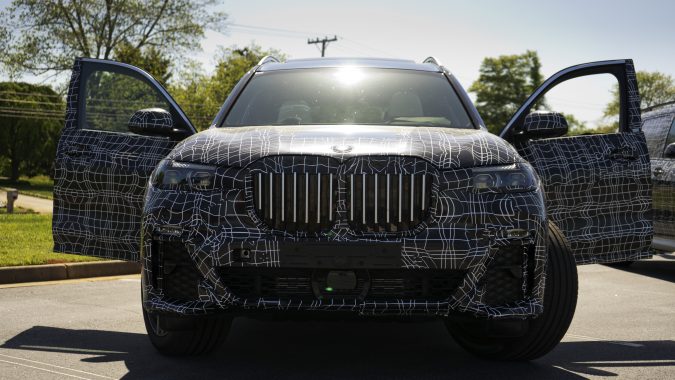 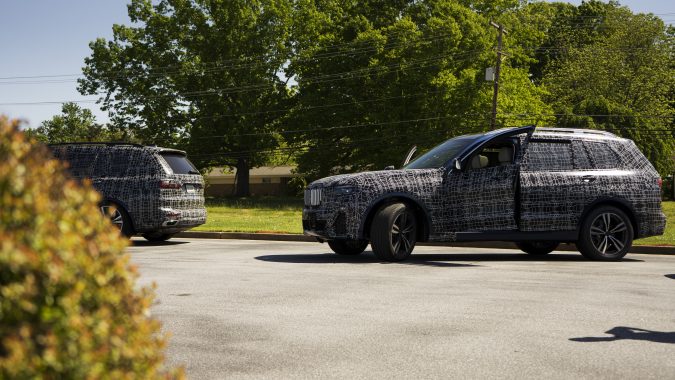 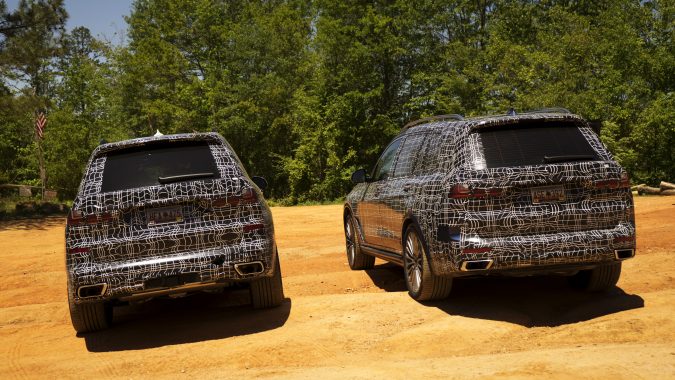 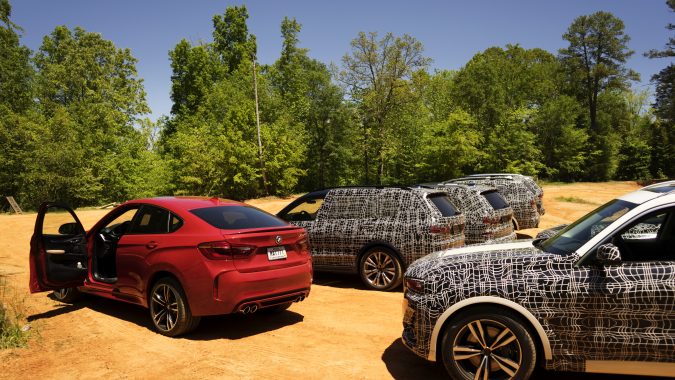 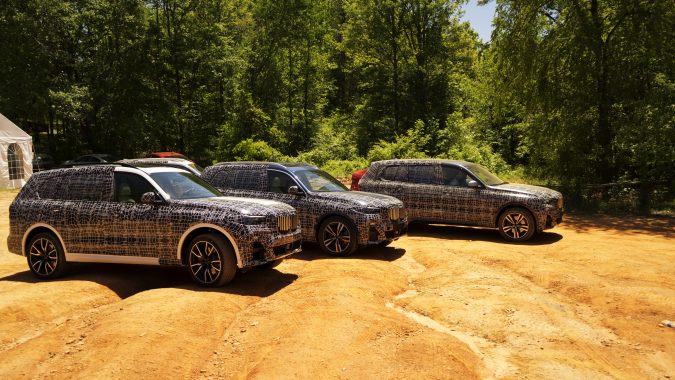 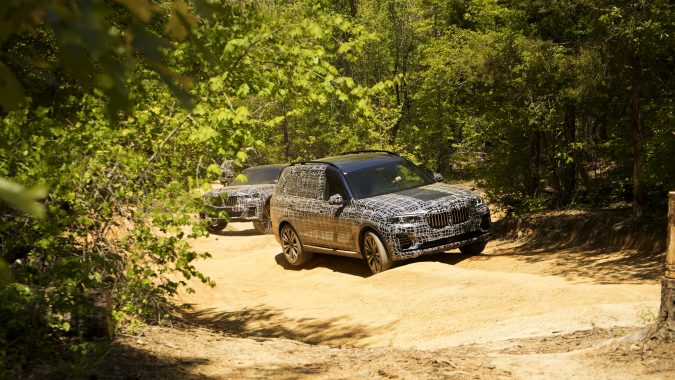