NIAGARA-ON-THE-LAKE, Ont. – During a product presentation for a trio of 2022 Volkswagens, a slide caught my eye.

After driving both cars, I think it’s an accurate description for what they bring to the Volkswagen lineup. With the German auto giant’s range now being dominated by SUVs (five and counting), the presence of the hot hatches is the company’s way of throwing a couple of high-performance bones to long-running Vee-Dub fans.

Just to catch you up, the Golf GTI and Golf R are all that remain of the Golf lineup in North America. The eighth gen Golf debuted in Europe in 2019, but when Volkswagen of America declined to import it stateside, the business case for Volkswagen Canada retaining the car here evaporated. No more normal Golfs for us. But the fact that the GTI and Golf R made the cut is a nice silver lining in an era when passenger cars are being culled from manufacturer lineups at an alarming rate.

At any rate, both cars ride on Volkswagen’s MQB (modular transverse matrix) platform and share basic body styles, powertrains, and chassis componentry. There are a few core differences that set them apart, of course, such as the Golf R’s all-wheel drive and more robust engine output, but in the end these two are more similar than not.

For 2022, the 2.0-litre turbocharged four-cylinder (EA888) engine in the GTI gets a power bump to 241 hp / 273 lb-ft, which represent gains of 14 and 15, respectively, over the powerplant in the outgoing seventh-gen model. As was the case previously, the GTI remains a front wheel-drive car, with a choice of two gearboxes, a six-speed manual, or a seven-speed dual-clutch automatic (DSG). 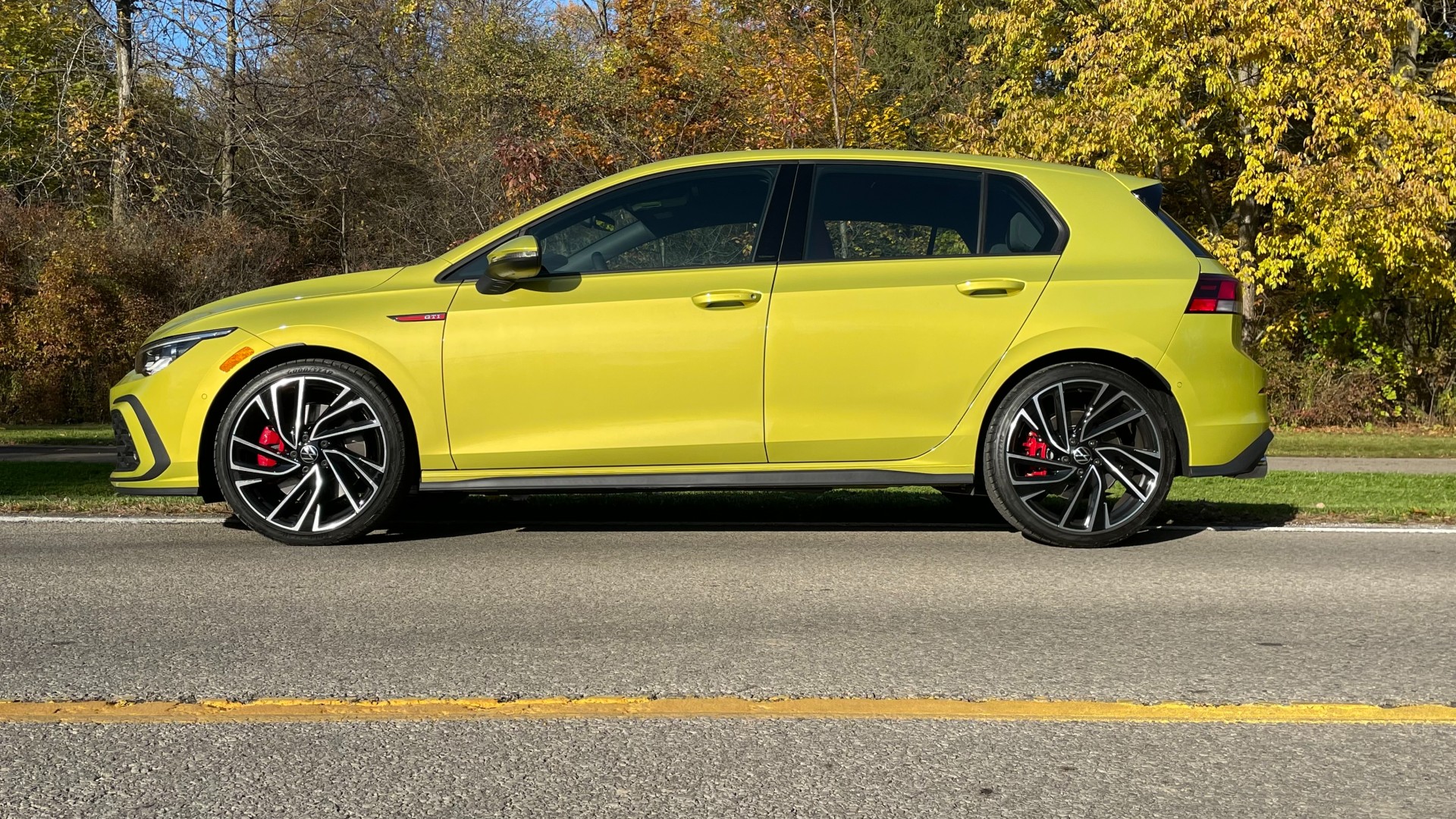 In terms of aesthetics, the styling changes are iterative and in keeping with GTI brand hallmarks. Notable among these are new LED lighting, red grille line with optional light bar, honeycomb air intakes with LED lighting, 19-inch wheels with available summer tires, red brake calipers, rear spoiler, and dual chrome exhaust finishers. Seven exterior colours are available, five of which are new to the GTI. 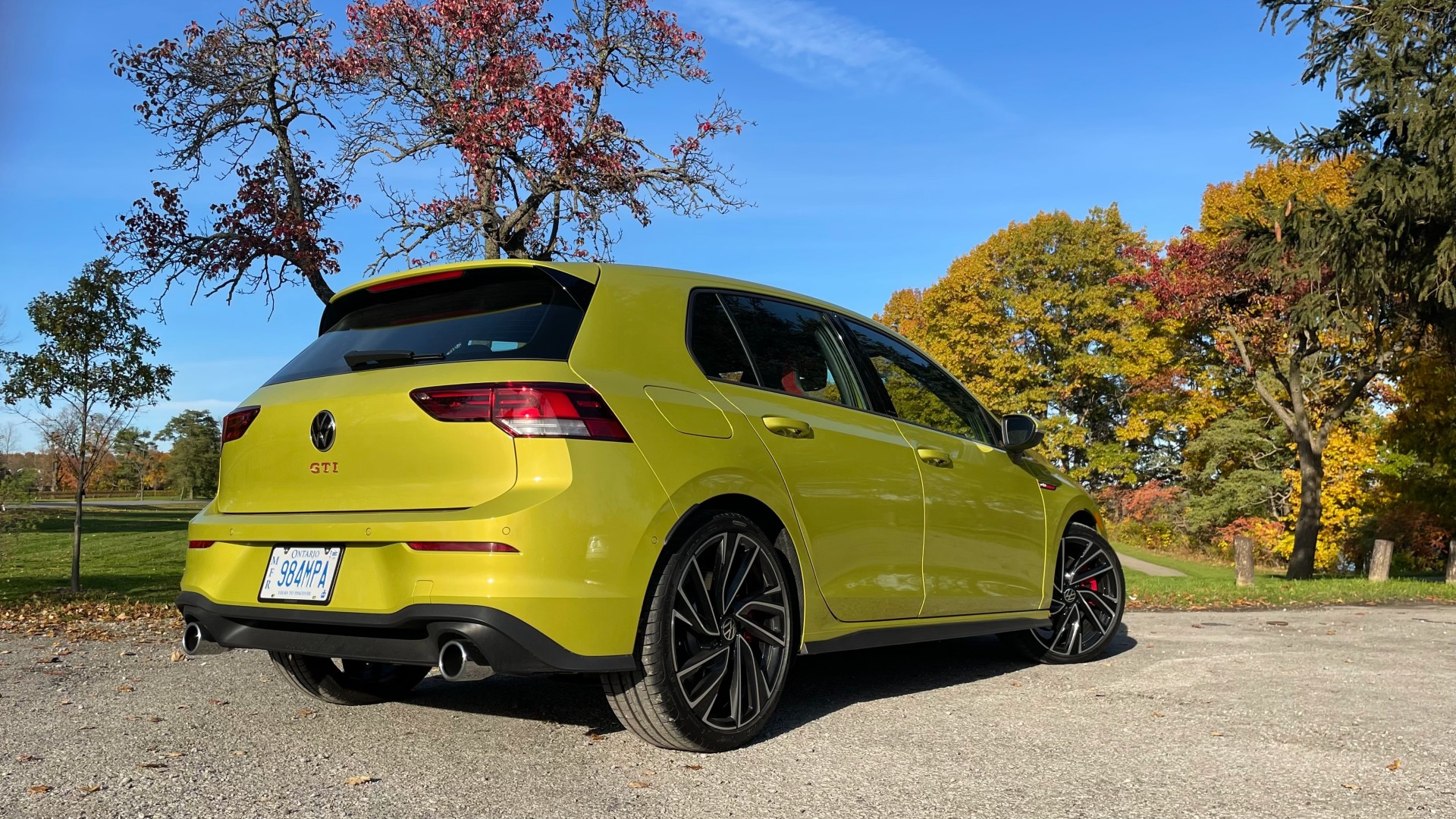 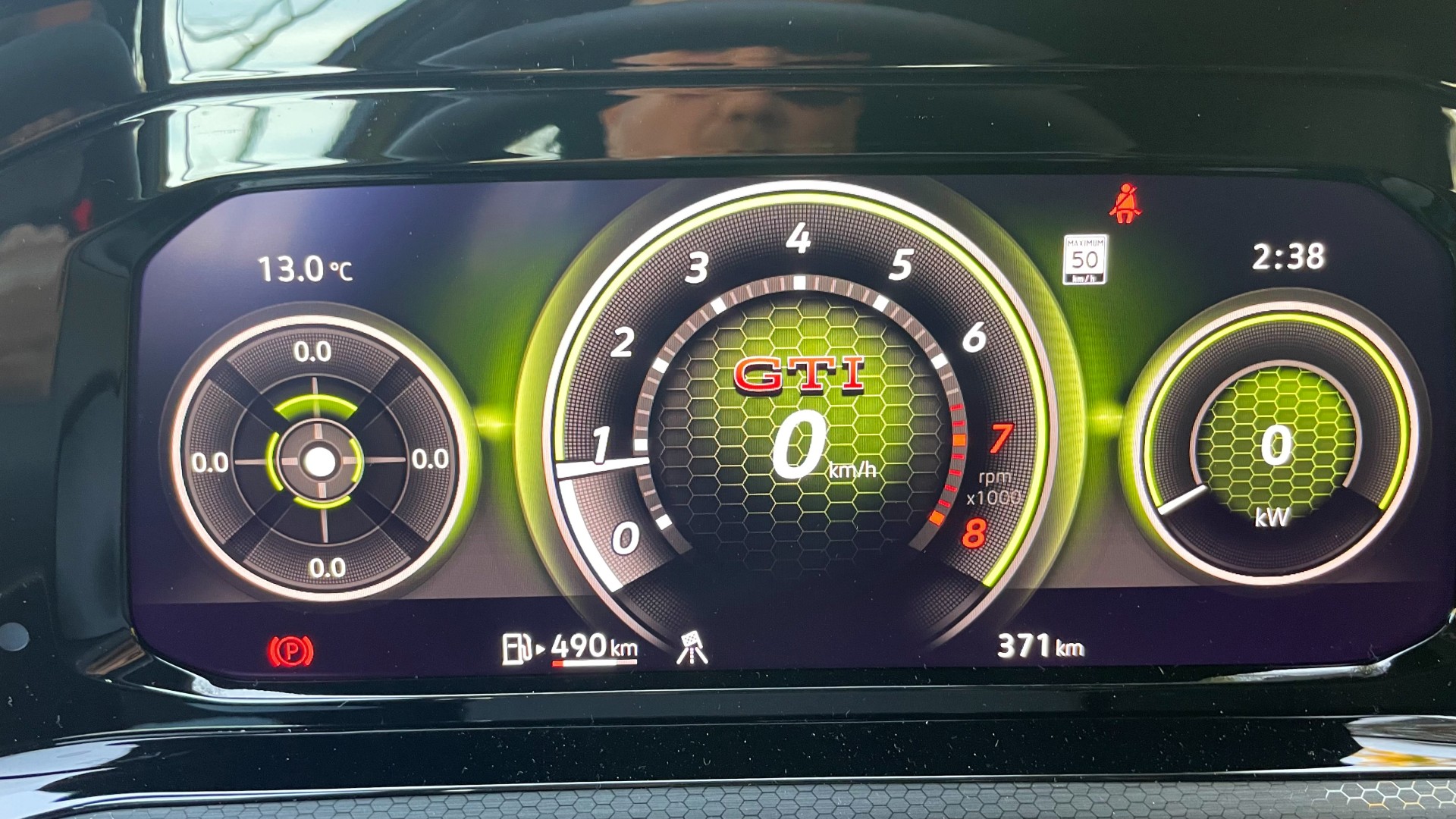 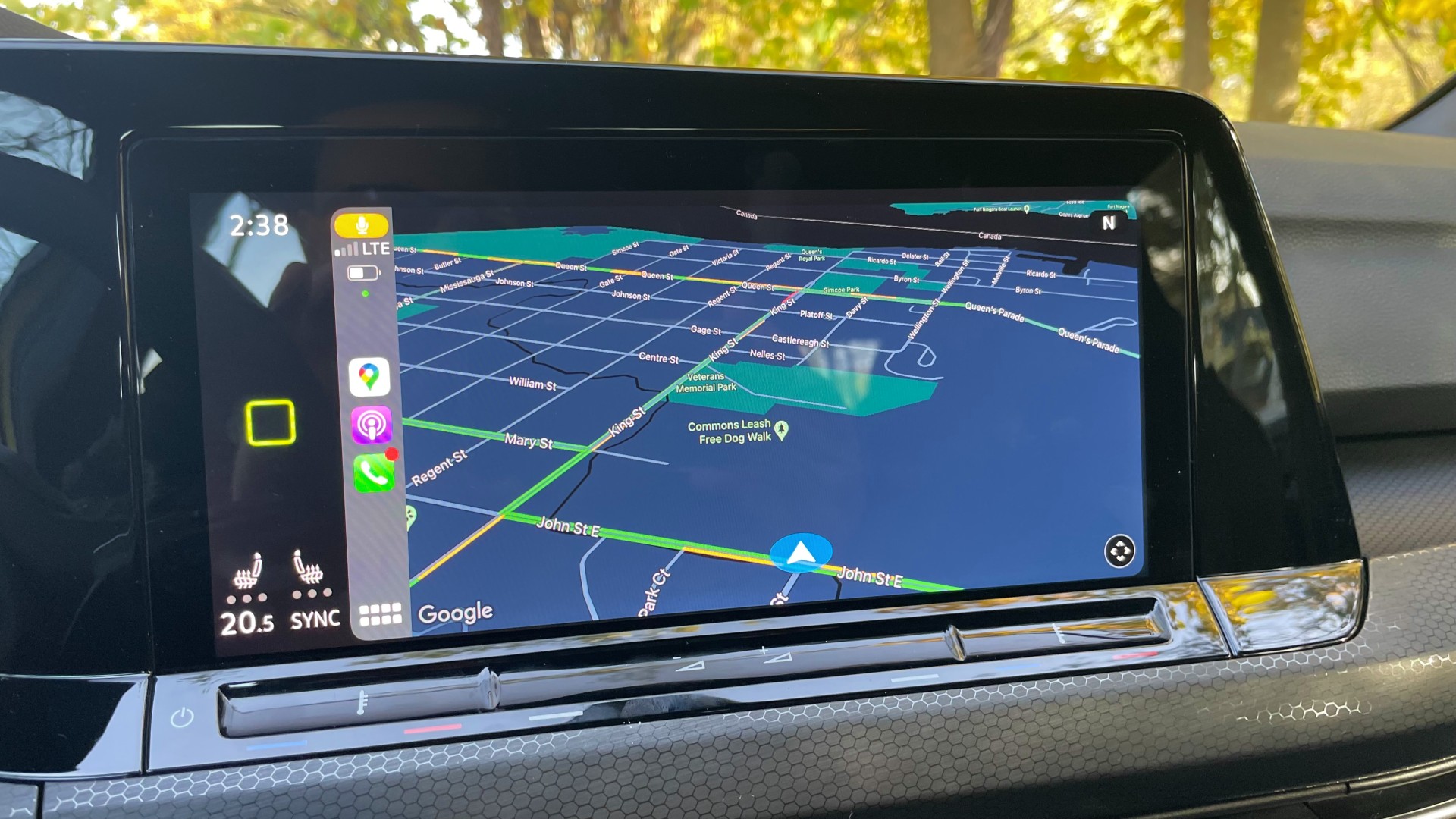 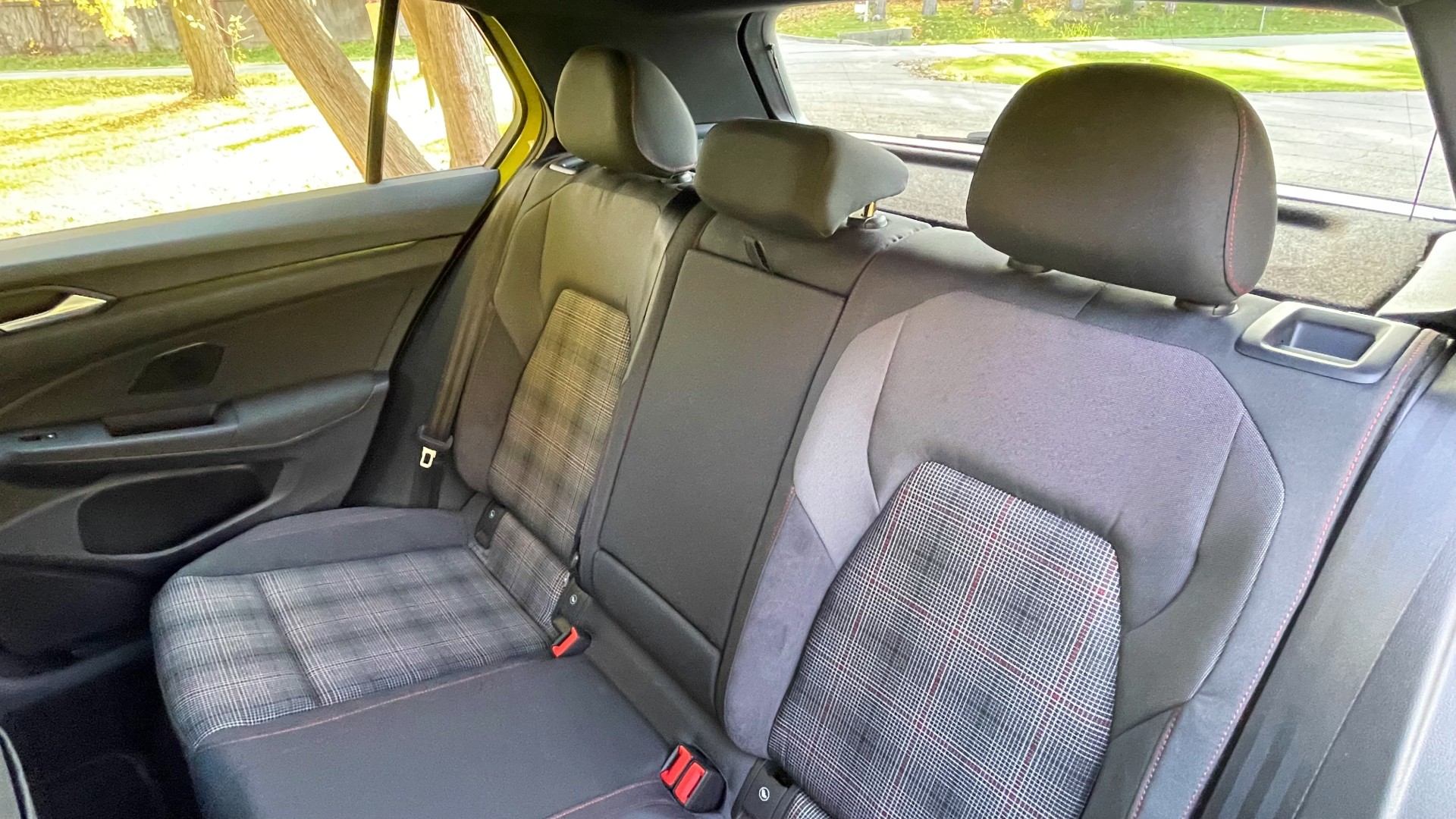 Notably, Volkswagen Canada is offering a no-charge leather delete package for the Performance grade, which is unavailable in the U.S. Same goes for the sunroof, which is optional ($1,250) on the Performance model in Canada, but is standard on the top level GTI (Autobahn) in the U.S. In fact, the sunroof is optional for all GTI models in Canada. Volkswagen says these packaging choices are a direct result of customer feedback.

Did you know the 2022 model is the fifth Golf R, but only the third that’s made it to Canada? 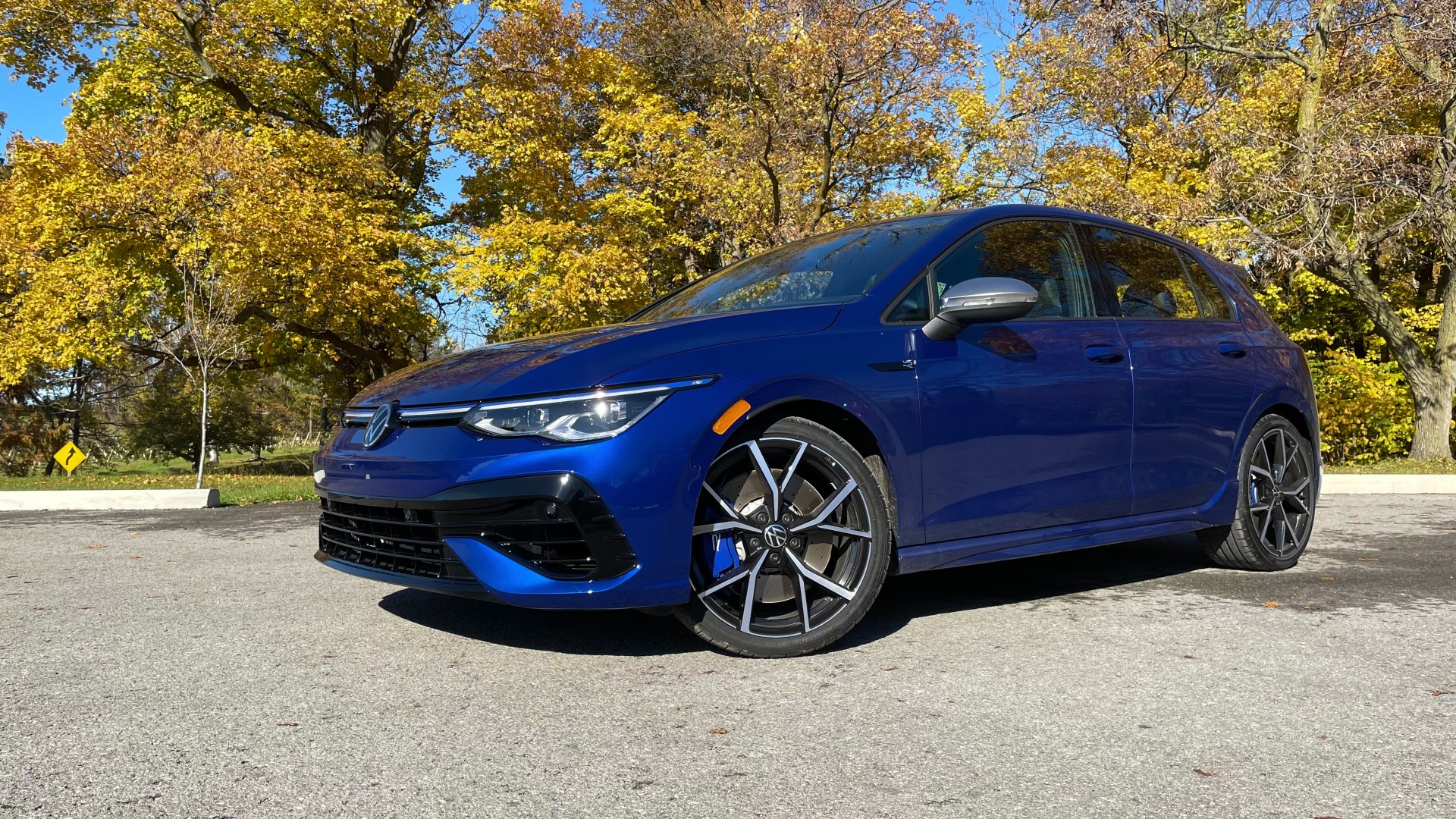 Seems like so long ago, because we’re now on our third Golf R and this model is “raising the bar” and is the “ultimate expression of Golf and Volkswagen” the company claimed in the product presentation.

For instance, power from the 2.0-litre EA888 turbo has been boosted to 315 horsepower and 295 lb-ft of torque when paired with the DSG gearbox. Torque output remains at 280 for the manual because – and I didn’t know this prior – North America is the only market where the Golf R can be had with a three-pedal setup. 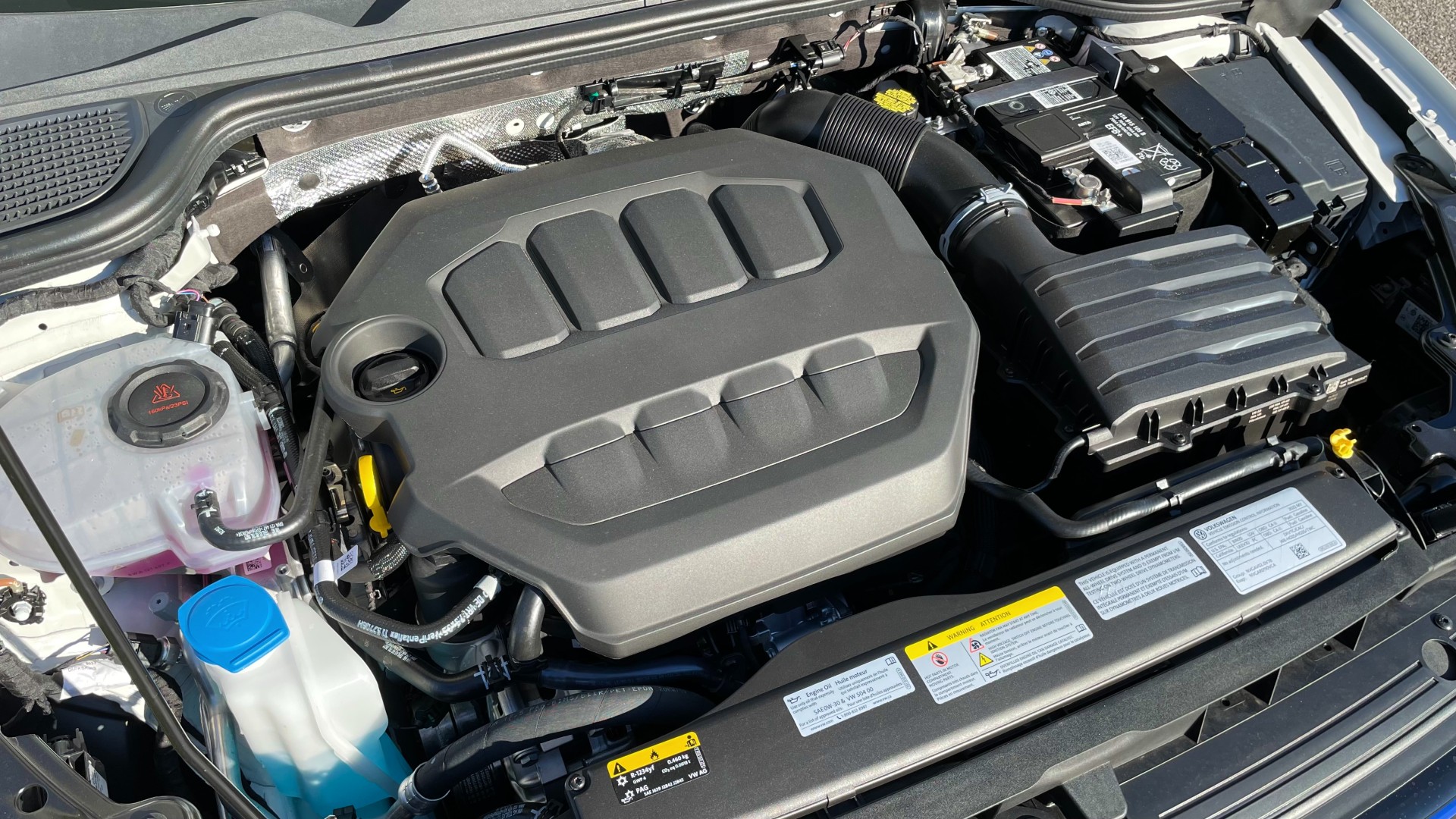 Europe dropped the manual when the previous model was facelifted, and it didn’t return for next generation. Given the manual is no longer a global feature, Volkswagen elected to not re-engineer the car around it, so therefore torque output remains the same. 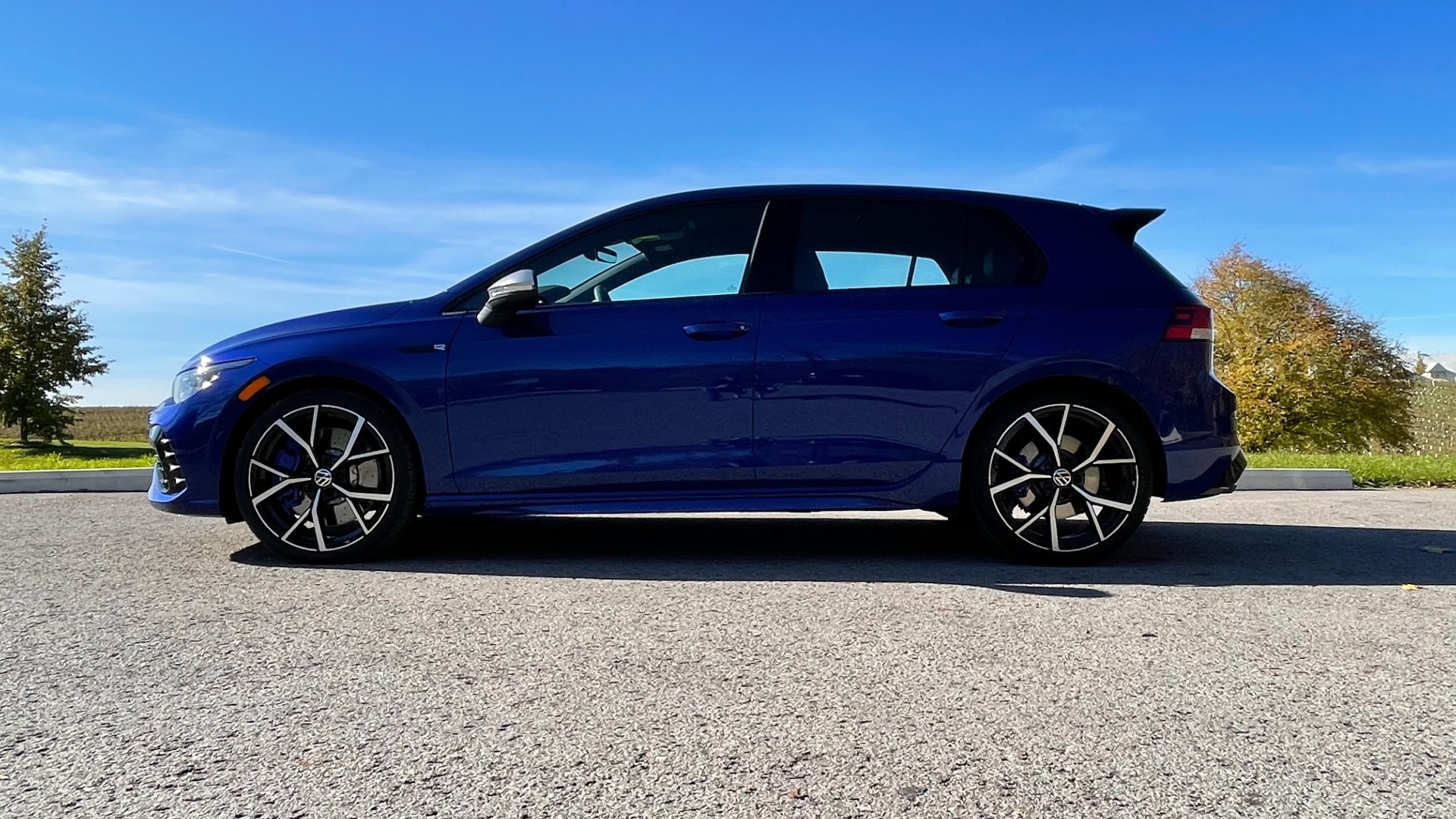 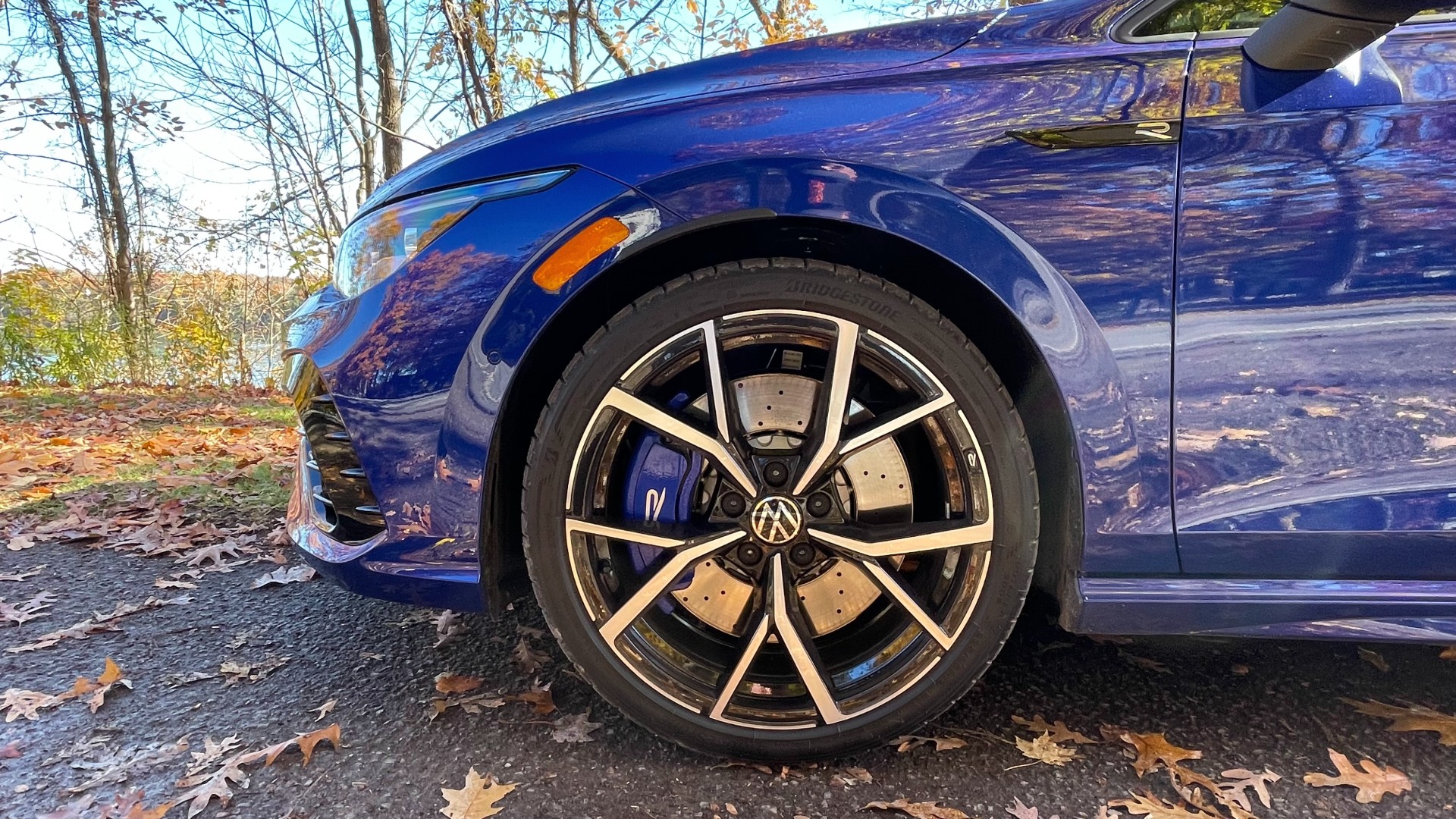 Aesthetically, the Golf R receives many of the same styling updates as the GTI, but there are a few unique details that set it apart, including R-specific front and rear bumpers, signature blue detailing, bi-level spoiler, and quad-tipped chrome exhaust finishers. 19-inch wheels wrapped in summer tires are also standard.

Inside, the cabin carries forward the GTI’s aesthetic, but with more stuff. For instance, the 10-inch infotainment touchscreen with embedded navigation is standard, as is an R-specific steering wheel, heated and ventilated front seats, heated rear seats, Nappa leather seating, and Harman Kardon audio system. 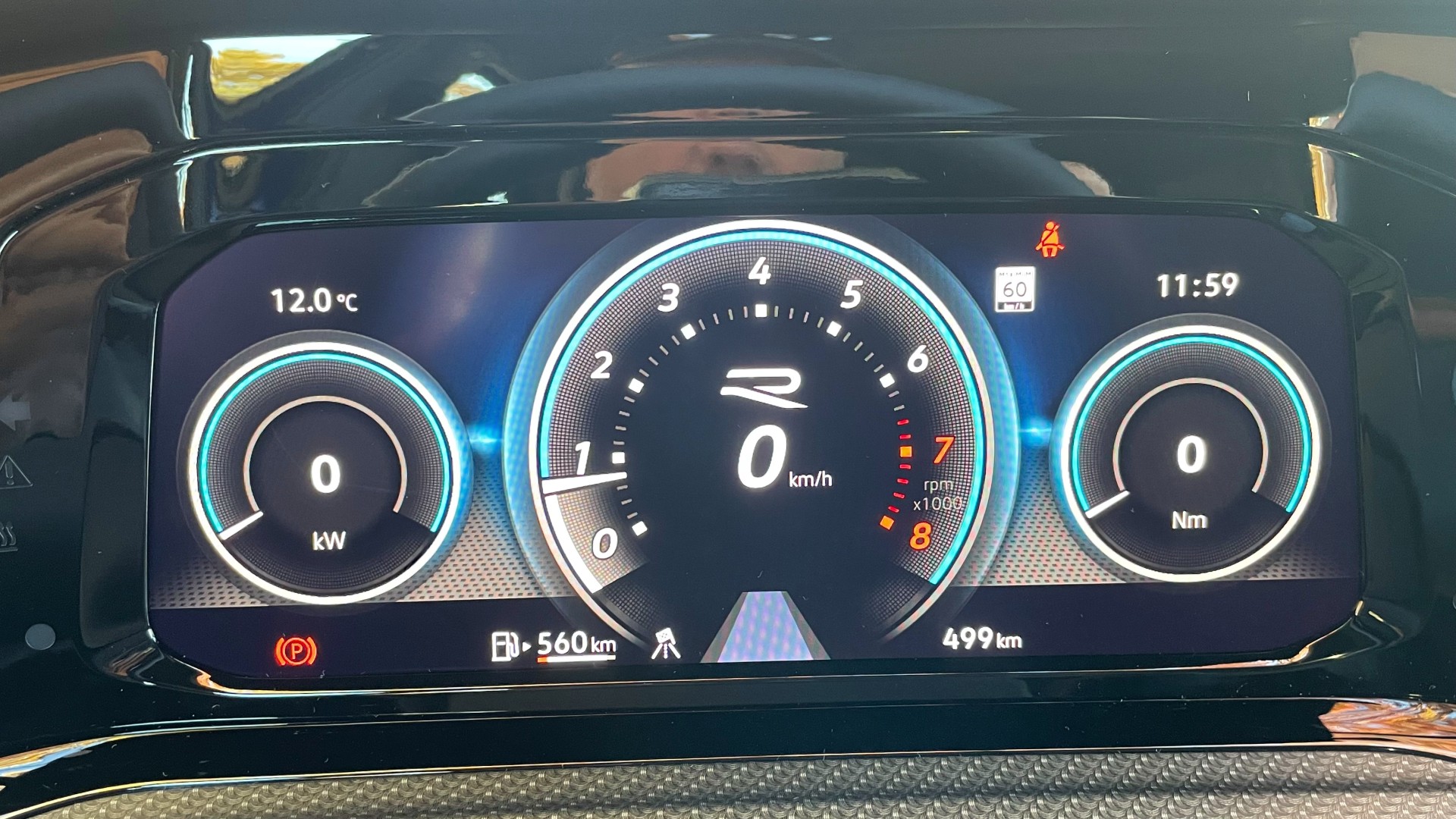 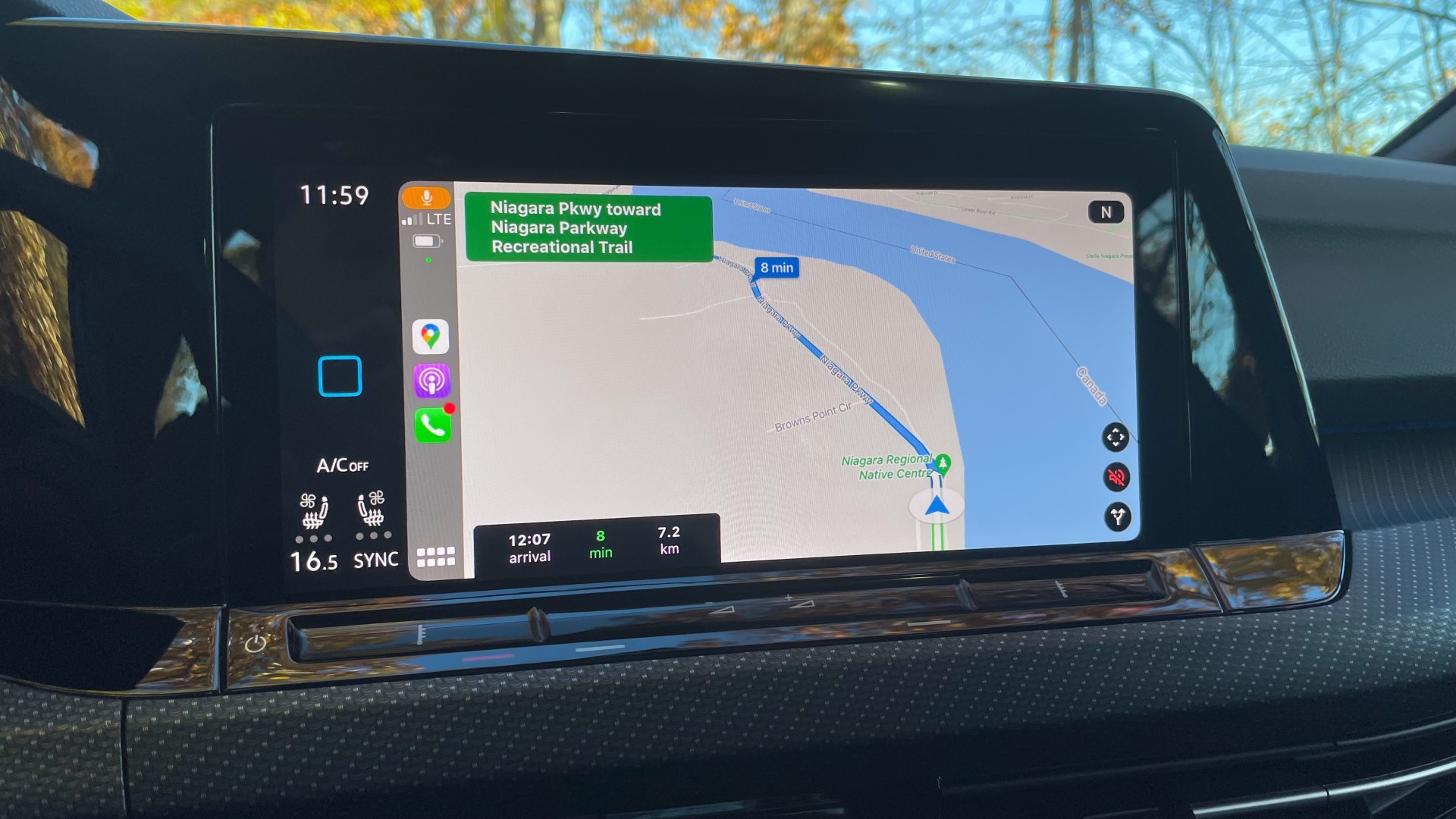 In terms of pricing, the Golf R comes one way for Canada, with a slightly bigger outlay for the DSG-equipped model ($46,395 versus $44,995 for the manual). The only factory option available is a power sunroof ($1,250).

Volkswagen Canada gave us the better part of a day to sample these two new hot hatches in the Niagara region, which proved to be a pretty great way to pass the time.

These cars are great. Barrels of fun. Fast, grippy and on rails. These hatches are so much fun, in fact, that I wish there was a track component for the drive. But there wasn’t, so public roads are from where my impressions are drawn.

These cars look fast, and they are. Both are better, in my view, with a manual gearbox, but the DSG and its paddles – at least in the Golf R – work just fine. Throttle response from the EA888 is hair-trigger in both cars, with launch being more aggressive in the R thanks to its extra power and all-wheel drive.

The clutch-shifter relationship feels well-suited to performance driving, with engagement that is both smooth and reliable for quick upshifts and downshifts. On mostly smooth Niagara roads, the Golf R feels stuck to the road, with good steering feedback and flat cornering. I was expecting a loud exhaust, a real bap-bap-bap sort of experience, especially off-throttle, but it was muted overall. It does get louder if one really stands on the accelerator in sport or race mode but is relatively sedate otherwise.

The new torque vectoring system, which can variably send engine torque across the rear wheels in dynamic driving conditions (including up to 100 per cent to either wheel) to help scrub off understeer for better rotation through corners, really needs track evaluation. I sampled a similar system in the 2022 Audi RS 3 on track in Greece in October, and it worked as advertised. I have a feeling the same would be true for the Golf R, and hopefully I’ll have the chance to confirm that assumption eventually.

I’m speaking mostly about the R here, but the GTI delivers much the same experience, albeit with a bit less power.

In sum, both cars deliver on Volkswagen’s “Fuel the Fans” promise, and I think they’ll find favour not only among long-time brand aficionados but will appeal to newcomers as well. The interiors of both cars are delightful as well, with supportive seating and a clean, straightforward dash panel/centre console layout. I wish there were a few more mechanical buttons, but that’s me. The touchscreens work fine once you’ve familiarized yourself with them.

Honda and Subaru will roll out all-new Civic Type R and WRX models next year, and they will face stiff challenge in the market from Volkswagen. The gauntlet has been thrown down.

The 2022 Volkswagen Golf GTI goes on sale across Canada in December. The Golf R will begin arriving in early 2022.