AMG’s first EV delivers the speed the brand is known for.

Flamingos aren’t naturally pink. They’re born a sort of grayish colour and then turn pink thanks to their diet of brine shrimp and algae. It takes time to develop the hue we’ve come to expect from watching old episodes of Miami Vice.

Why are talking about tropical wading birds in reference to an ultra-luxurious sedan with a world-destroying amount of horsepower? Because, by and large, electric vehicles didn’t originally show up in the market as anything resembling a performance vehicle. Decades ago, the first efforts were generally soulless transportation appliances designed for a sole purpose: to reduce the consumption of fossil fuels.

Engineers at AMG in Affalterbach have been known for lending their talents to various and sundry Mercedes models, imbuing cars – and, lately, SUVs – with the performance associated with the types of machines Lewis Hamilton drives (absent interference and meddling from the FiA). Now, they’re turning their attention to the Mercedes catalog of electric vehicles, a portfolio which includes the EQS, an imposing four-door flagship that sits atop the company’s all-electric food chain. 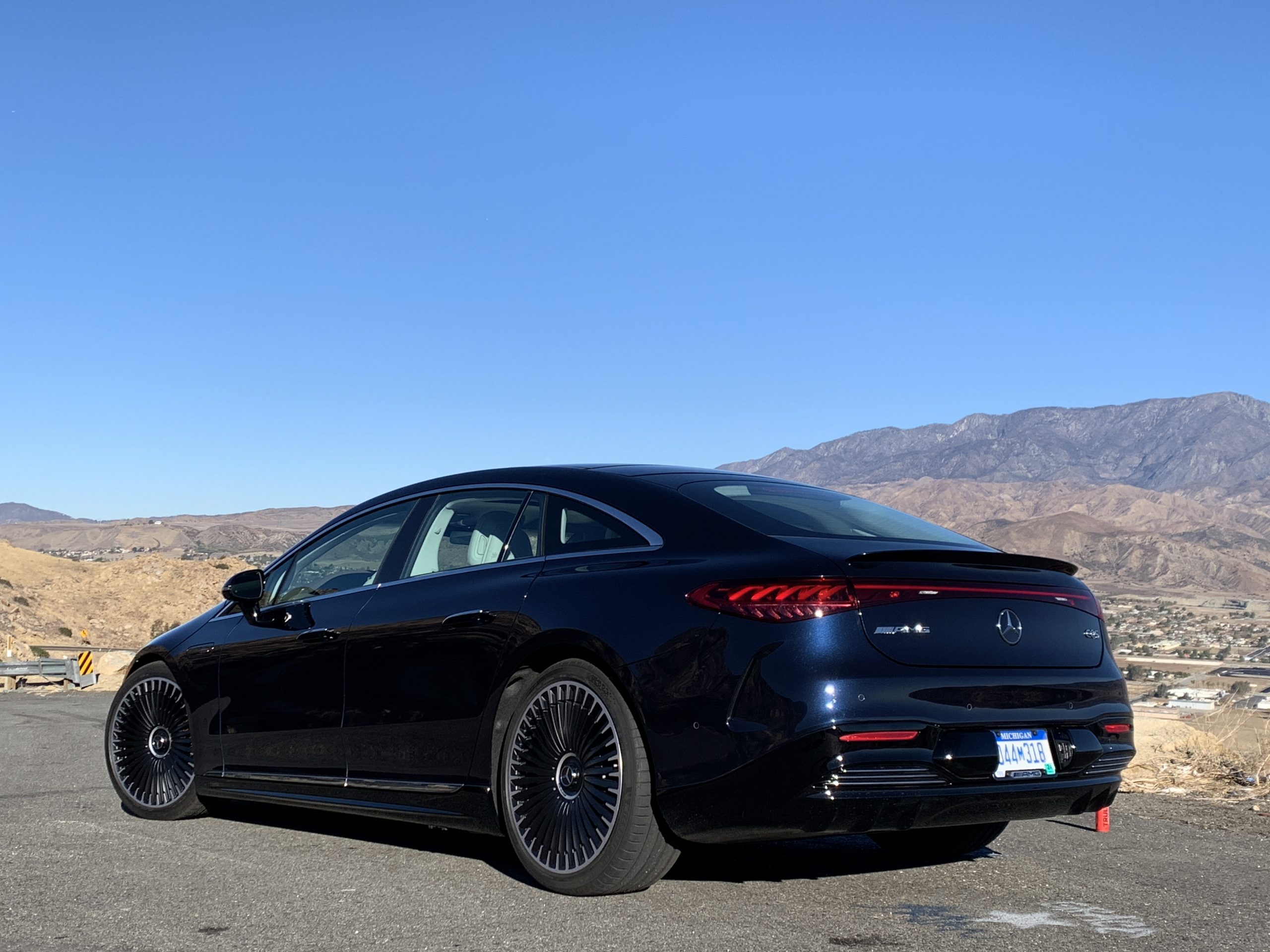 At the heart of this Mercedes-AMG EQS are two electric motors – one front, one rear – which have been breathed upon by the speed freaks at AMG. All versions of this hot EQS pack a total output of 658 horsepower, with a maximum motor torque of 750 lb-ft, all of which is available the instant its driver flexes their Gucci-clad big toe. But, as Ron Popeil used to say, there’s more. When a boost function in Race Start mode is activated, power climbs to 750 of the finest German electric horses and slingshots the AMG EQS from a standstill to 100 km/h in an eyeball-flattening 3.4 seconds. Note well: AMG hedges their bets by saying the 107.8 kWh battery needs to be at a charge level of at least 80 percent to perform this trick.

In practice, that detail doesn’t seem to matter. Acceleration from a dead stop, with all four tires pressing themselves into the California tarmac with nary a chirp, pushes you back in the sumptuous driver’s throne as if being sat upon by a deity flopping down on their couch after a long day of not answering anyone’s prayers. These are AMG-specific motors with new windings to ensure a stronger electrical current and higher rotational speeds. Engineers call them ‘permanently excited synchronous motors’, a term which delights your author to no end. He wishes all motors were permanently excited. 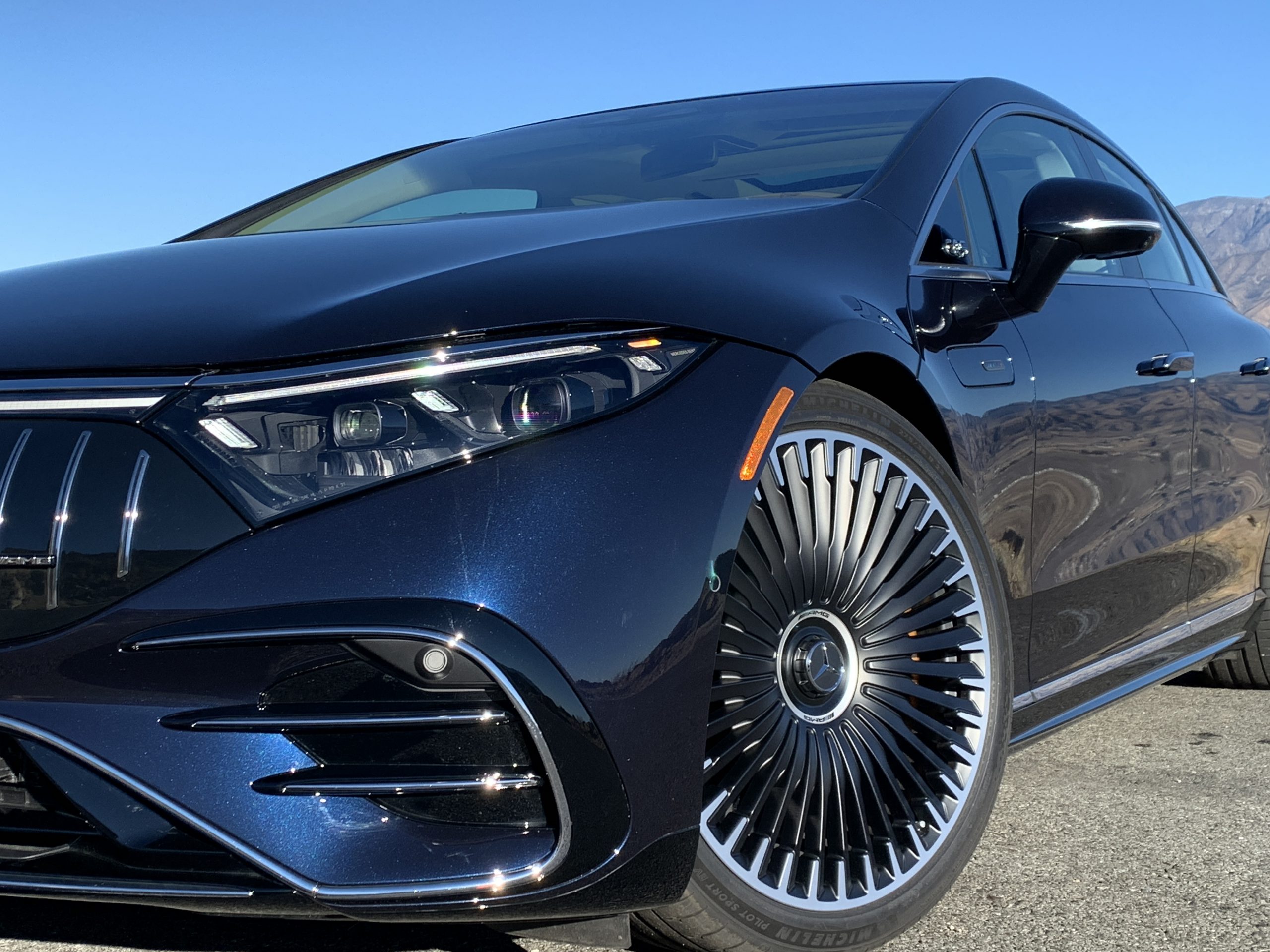 Adding to the levity is AMG’s decision to pack the hottest EQS with rear-axle steering. From 60 km/h, the front and rear wheels steer in concert, virtually extending the car’s wheelbase to provide increased handling stability at rapid clips and during fast lane changes. At speeds below 60 km/h, the rear wheels steer in the opposite direction to the fronts, making the AMG EQS tremendously more manoeuvrable and nimbler than its 205-inch (5,216 mm) overall length suggests. We found the effect to be particularly positive while navigating a parking lot since the steering angle of up to 9 degrees reduces turning circle measures to compact-class level. Livery drivers around the world, often tasked with navigating the tight confines of a hotel parking lot, will rejoice.

Though we’re not entirely sure the AMG EQS will be pressed into limo-style service with the historic frequency of an S-Class. Your NBA-sized author had no trouble finding ample legroom in the back of this car but headroom was at a premium thanks to a sloped roofline which was crafted in search of wind-cheating aerodynamics. In the latter, AMG succeeded – this car has a drag coefficient of just 0.23 – but has done so at the expense of 2-metre humans being able to sit bolt upright in the rear cabin. No such complaints are levied at the front row of chairs, which offer the level of luxury one would expect from a machine whose starting price is $184,200. 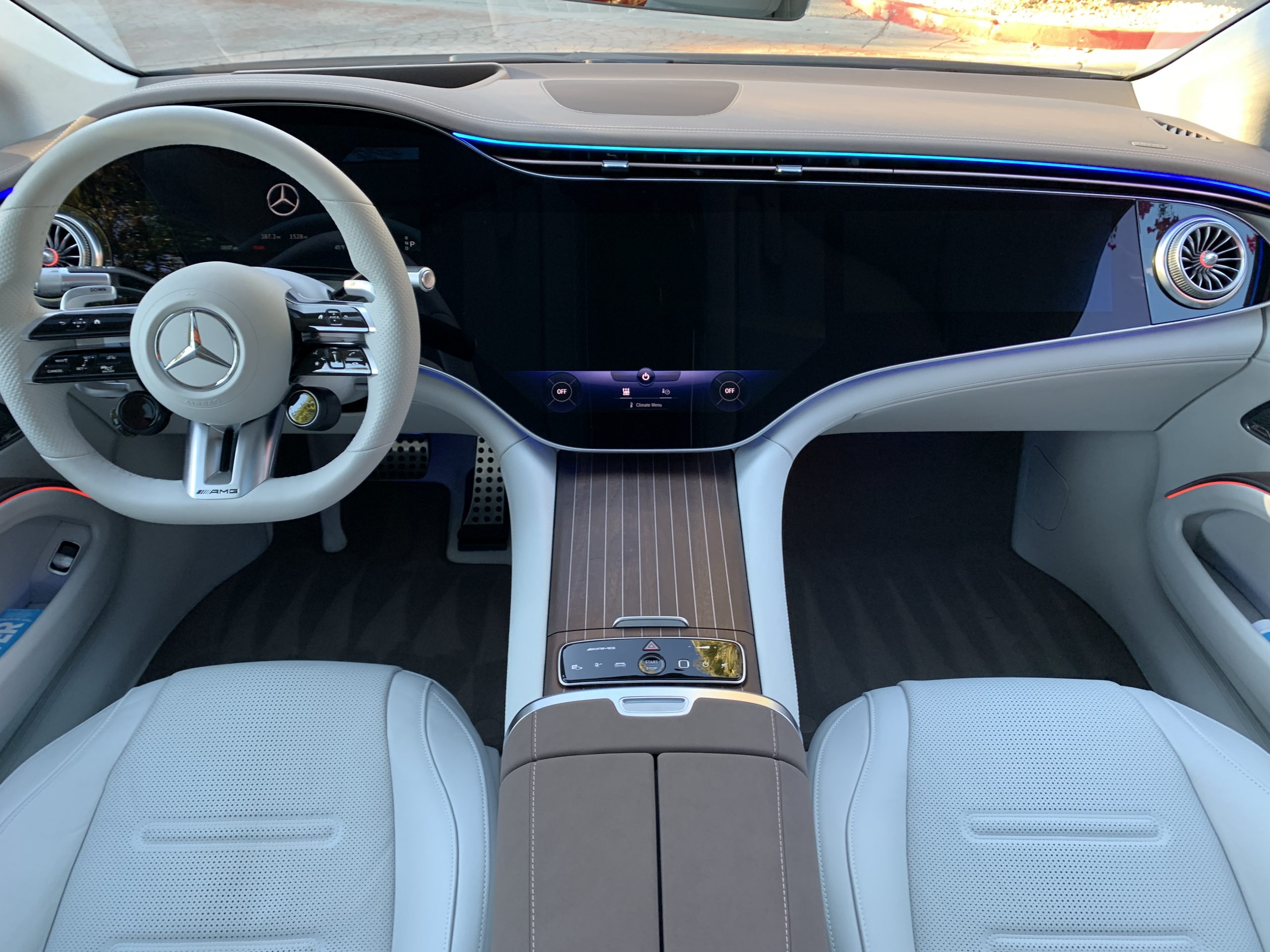 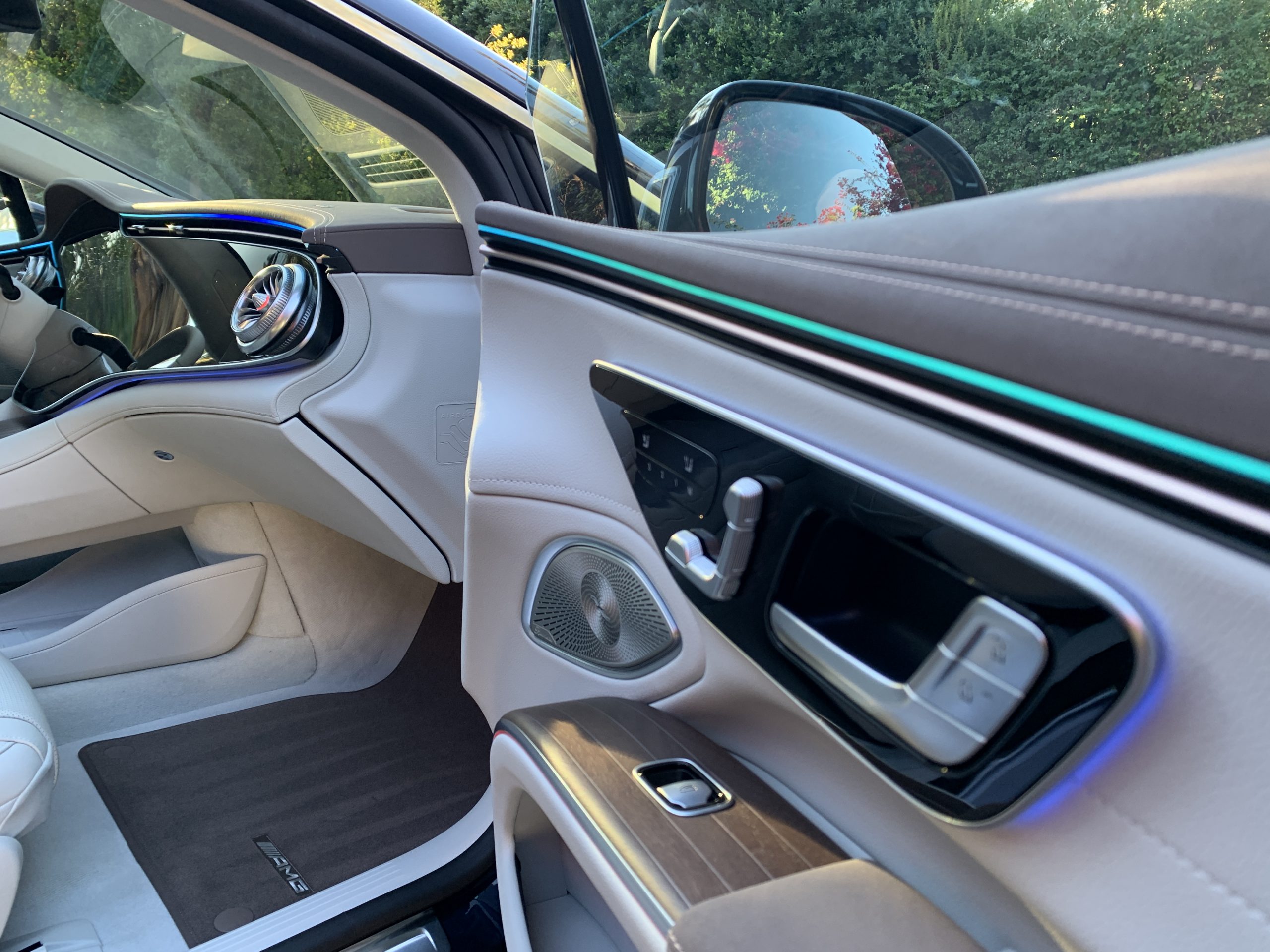 In fact, one could call the EQS interior an antithesis to the cold and stark cabin of a Tesla Model S. The fit and finish are impeccable, and it would be an insult to simply describe the materials as first-rate. The carpet makes one want to remove their shoes and wriggle toes into the plushly covered floor, while every upholstered touchpoint is covered with thick and buttery leather. AMG calls the massive expanse of dashboard digital real estate a hyperscreen, though it is actually comprised of three individual screens sitting underneath a piece of curved glass which stretches the entire width of the car. Lighting effects pepper the interior, including a strip atop the hyperscreen which can dance red and blue in response to temperature requests of the ventilation system. The effect is striking as if you’ve sat down at the Ops or Conn station of a starship.

Speaking of, permit us a moment’s geekery while attempting to describe AMG’s efforts to imbue the EQS with sporting levels of auditory theatre. Fans of the Trek franchise may recall the unearthly and aggressive baritone made by the USS Vengeance when it caught up the Enterprise at warp speed while fleeing the Klingon home world. When all the AMG EQS settings are placed in Sport+ and its driver drops the hammer, this fleet-of-foot luxury sedan makes an incredibly equivalent sound. The only things missing are threats uttered by Kahn and Admiral Marcus.

AMG doesn’t simply pipe artificial sound into the cabin through the audio system. It brings special loudspeakers, shakers, and a sound generator to the party. Its tonality and intensity match the drive mode (Slippery, Comfort, Sport, or Sport+) or can be controlled via a button on the steering wheel which is normally reserved for exhaust note fettling in gasoline-powered AMG models. Everything can be shut off, leaving the driver with only their thoughts and wind noise; this, with power delivery and the air suspension placed in their sportiest settings, was your author’s preferred configuration while carving up smooth and twisty California roads. The sensation of cracking along at speed with only a whisper of wind emanating from the side mirrors was a uniquely alien but satisfying experience. This is a heavy car at 2,655 kg (5,840 lbs) whose weight announces itself in corners but creates a commanding authority when accelerating to grab that opening in heavy Los Angeles traffic. 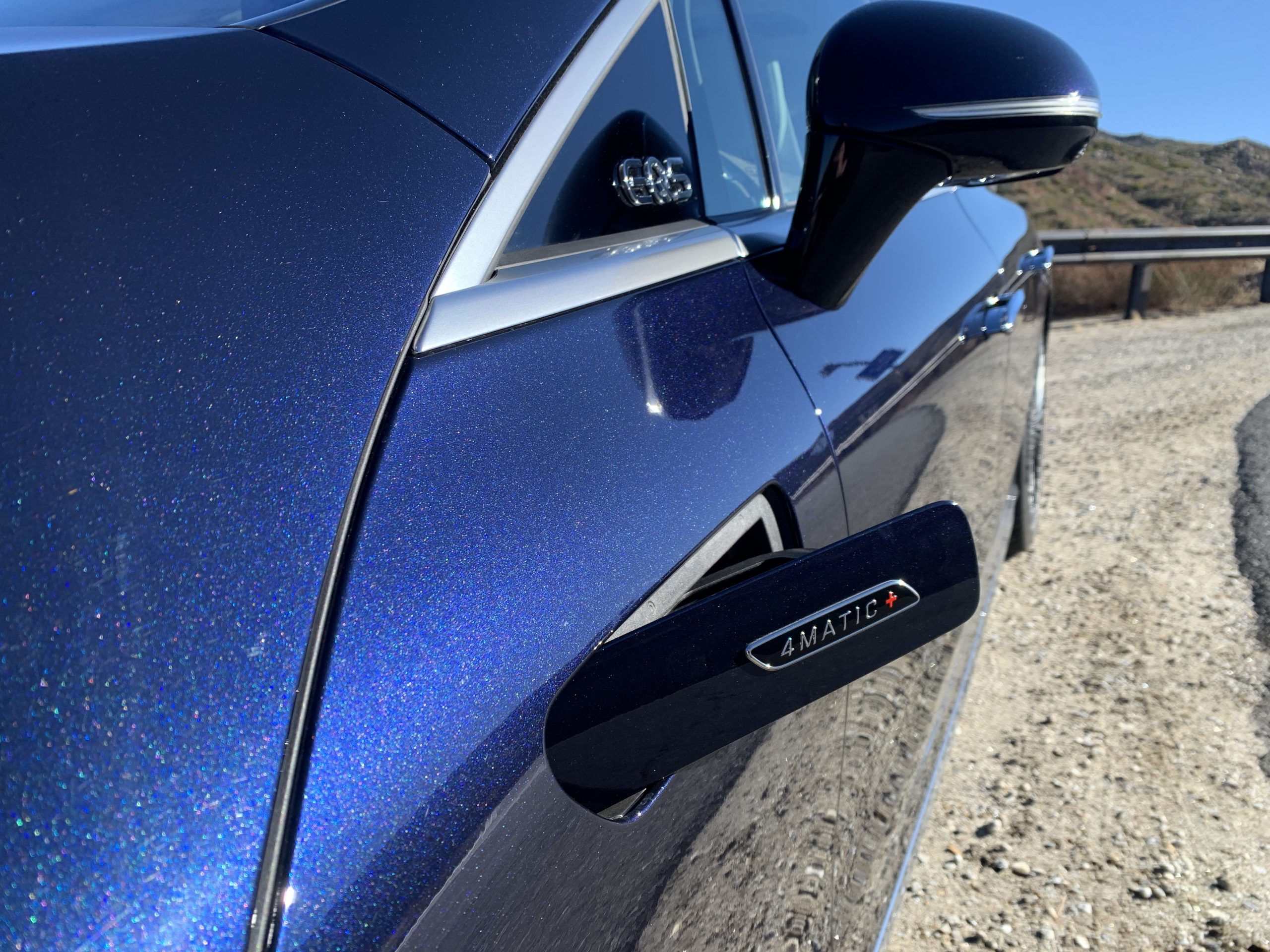 Other oddities? It is technically possible to lift the hood of this EQS but AMG doesn’t make it easy, moving the command away from its standard location as a lever at the driver’s left leg. Even after finding the release function, there was no point in doing so since it was simply like visiting the mechanical floor at a snazzy hotel: there’s nothing to see but industrial items and the owners don’t want you there anyway. The latter is made abundantly clear by the fact that AMG has placed a blade-like door on the left front fender whose sole task is to provide a spot with which to refill the windshield washer fluid. Since there’s no frunk, like on the Lucid Air or Tesla Model S, owners of an AMG EQS are likely to never open the hood of their car.

Not offering a cargo space in that area was a deliberate decision on the part of designers, permitting them to shrink that part of the car down to a space just big enough for air conditioning and other mechanical gubbins. This then permitted the team to push the EQS interior to outsized dimensions, including a vast rear cargo area rivalling most SUVs in terms of length and width if not height. 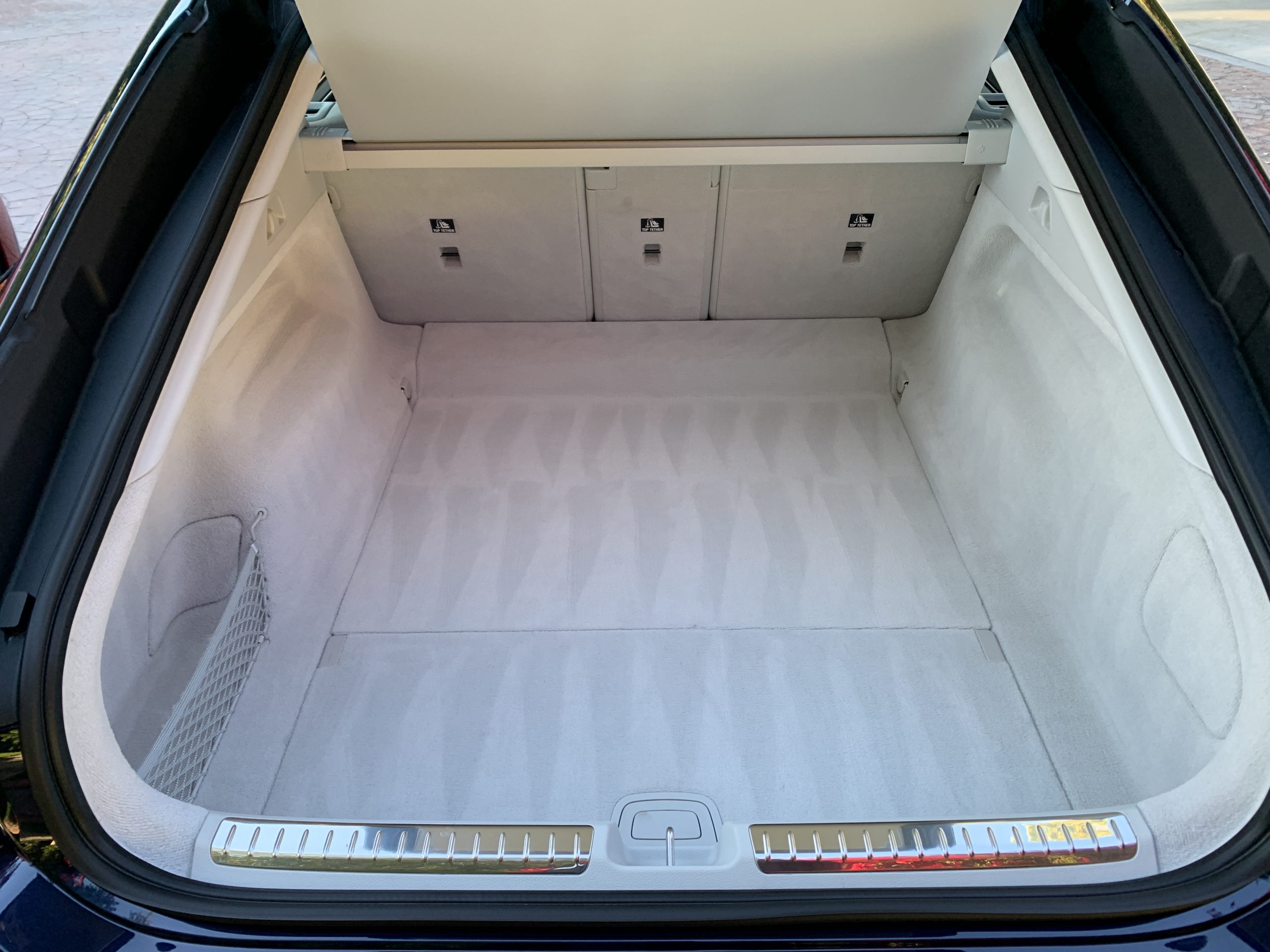 If you’re wondering why this, the hottest and most expensive variant of the EQS, doesn’t have any numerals after its model name – a less expensive and less powerful version is called the EQS 580 – thank (or blame) naming conventions in other markets and a propensity for certain corners of the moneyed set to oversimplify the meanings of numbers. Our test vehicle will be called the AMG EQS 53 in other countries but there’s an unspoken concern that some North American consumers may not cotton to having a ‘lesser’ numeral appended to their car if it lives further up the totem pole.

Range is always a big question mark for electric cars, and AMG says this EQS can travel up to 586 kilometres on a single charge according to the WLTP measuring system. In the real world, we started the day with a fully charged battery and a maximum indicated range of 332 miles (531 km). After four hours and about 300 km of driving split between spirited mountain attacks and dense interstate traffic, we were left with an indicated 109 miles (174 km) of range.

This is the first battery-electric production car from the automaker’s in-house performance subsidiary, and we feel it is appropriately representative of the go-fast brand. After all, AMG is known for speed and performance, just like a flamingo is known for being pink – even if it doesn’t start life that way. 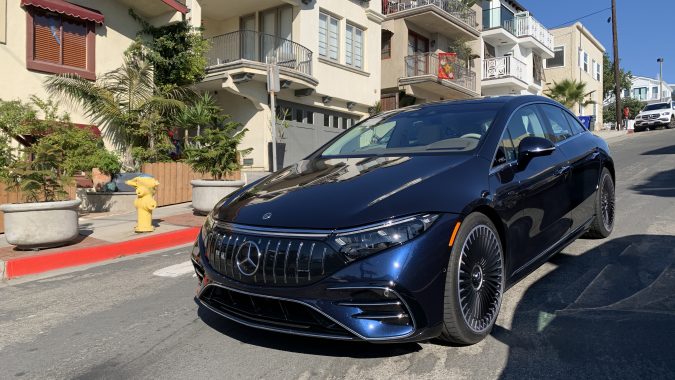 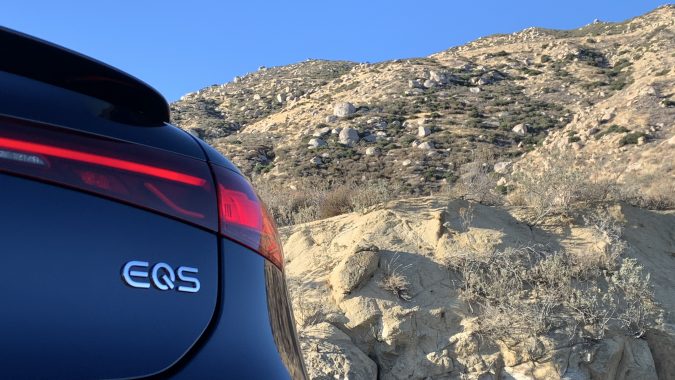 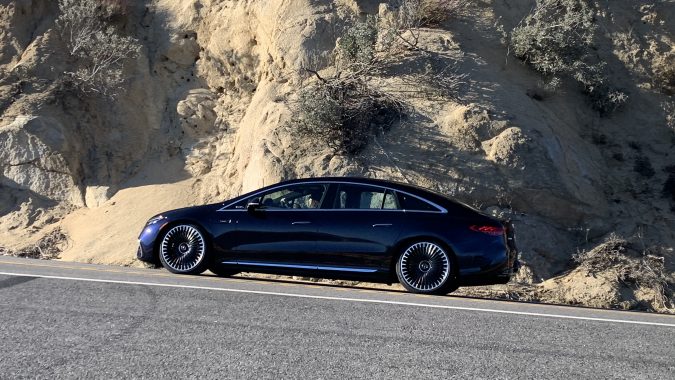 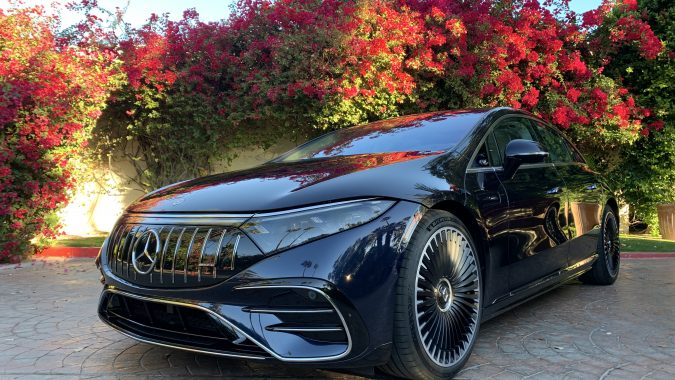 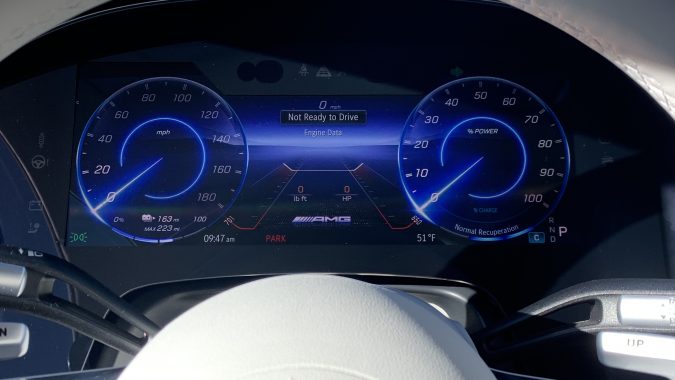 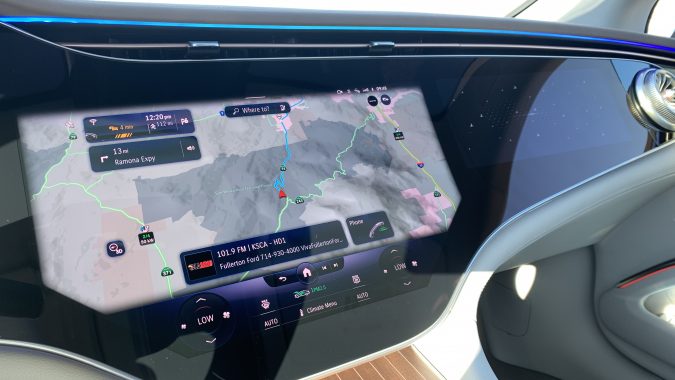 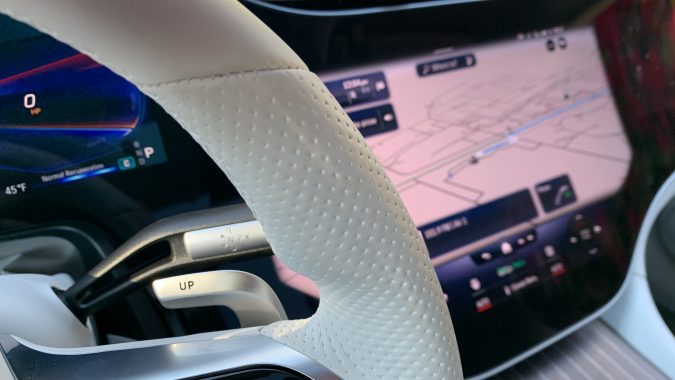 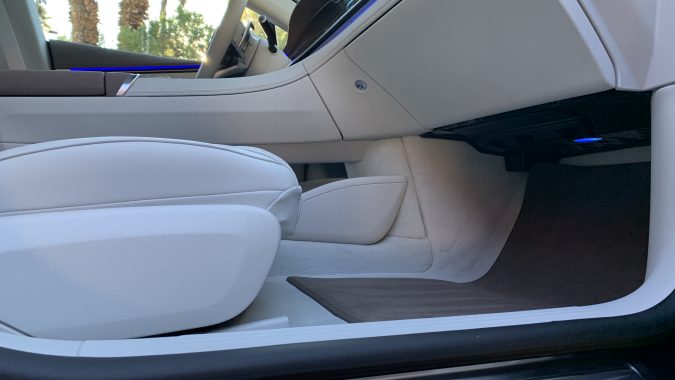 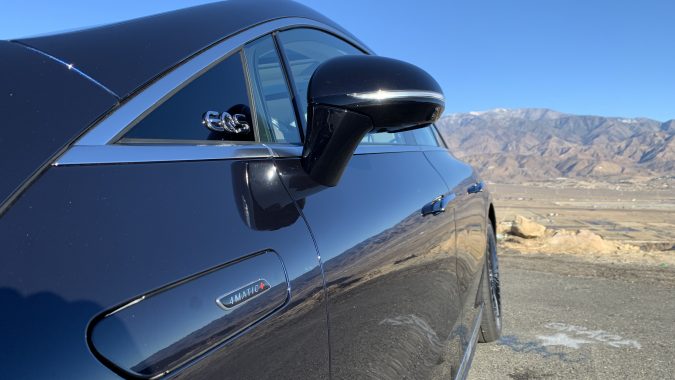 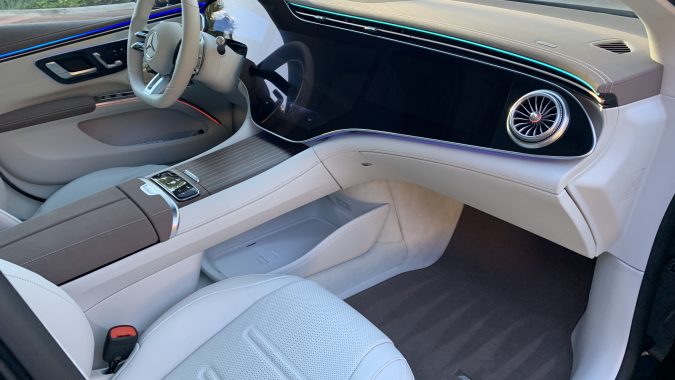 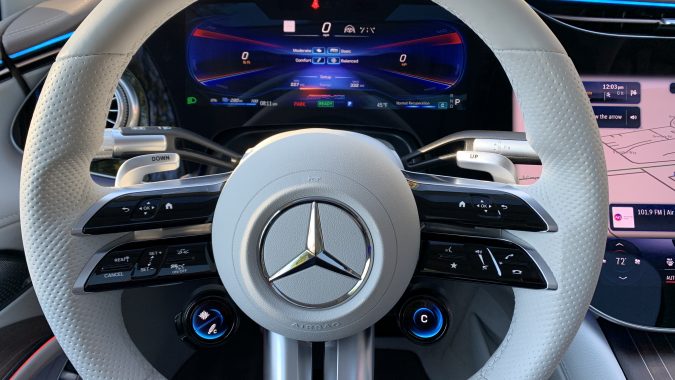 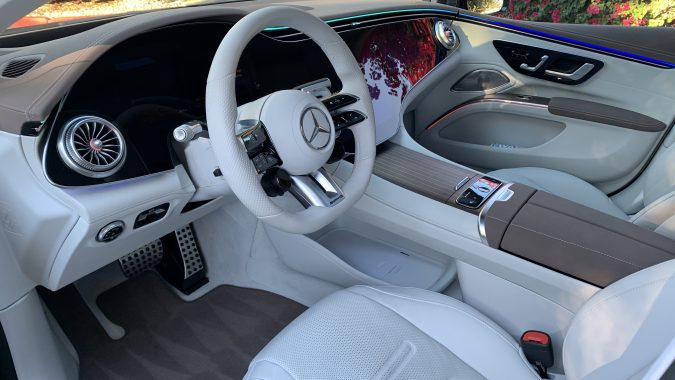