UPDATE: GM has recently announced an expanded recall of the Chevrolet Bolt, now covering all years of its production so far, which includes a stop-sale order on all new 2022 Bolt and Bolt EUV models. GM says two rare manufacturing defects when together increases the risk of fire. GM will replace all defective battery modules and provide a new eight-year/160,000 km warranty on the new modules. The length of time of this stop sale is currently not known, nor how long new modules will take to arrive at Canadian dealers for replacement.

Despite some issues with Bolt battery fires, the innovator’s dilemma has hit GM hard when it comes to its early entry into electric vehicles. Its launch of the Chevrolet Volt back in 2010 and the all-electric Bolt in 2017 means that it had leading-edge products at the forefront of their respective PHEV (plug-in hybrid electric vehicle) and BEV (battery-electric vehicle) markets.

But galloping technology – and GM’s own ambitious strides to stay near the front of the EV pack – has placed informed potential Bolt owners in a somewhat conflicted position: they know that much more advanced tech is imminent, but the updated 2022 Bolt now offers a tempting mix of the least expensive BEV on the market, along with 417 km of range that outdistances many luxury EVs at twice the price.

Back in 2019, GM made the very rare move of providing a sneak peek of roughly 10 of its next-generation of battery-electric vehicles – busting the all-too-common automaker mantra of “we don’t talk about future product.” All of these upcoming EVs, including the Hummer EV and the Cadillac Lyriq, will come with a skateboard chassis that will maximize people and cargo space, plus provide faster-charging and longer-range Ultium batteries that will eventually filter down to GM’s less expensive EVs. 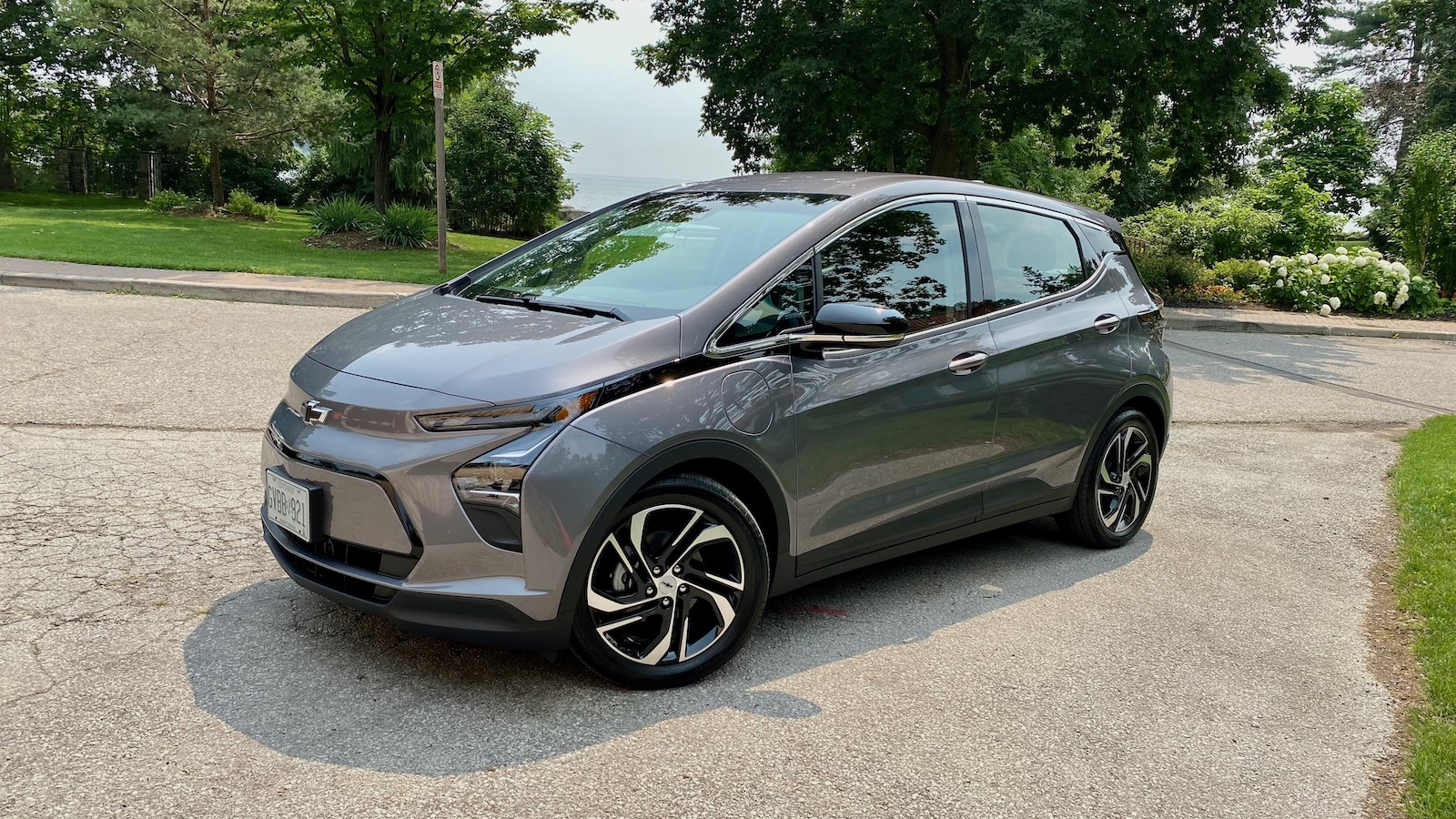 However, none of this tech will come to the Bolt, which offers no Ultium batteries, or quicker charging speeds, nor even a crowd-pleasing front trunk. Add into that a current recall to address a fire risk found in less than one per cent of models currently, but which has led GM to recall all Bolts, including new 2022 Bolt and Bolt EUV models.

But once that’s dealt with, and owners receive their new battery modules and new eight-year/160,000 km warranty from the time of their installation, the revised 2022 model will have addressed two less pressing but still long-time Bolt complaints: its plastic-laden, cheap-feeling interior quality, and its thin, lightly-padded seats. 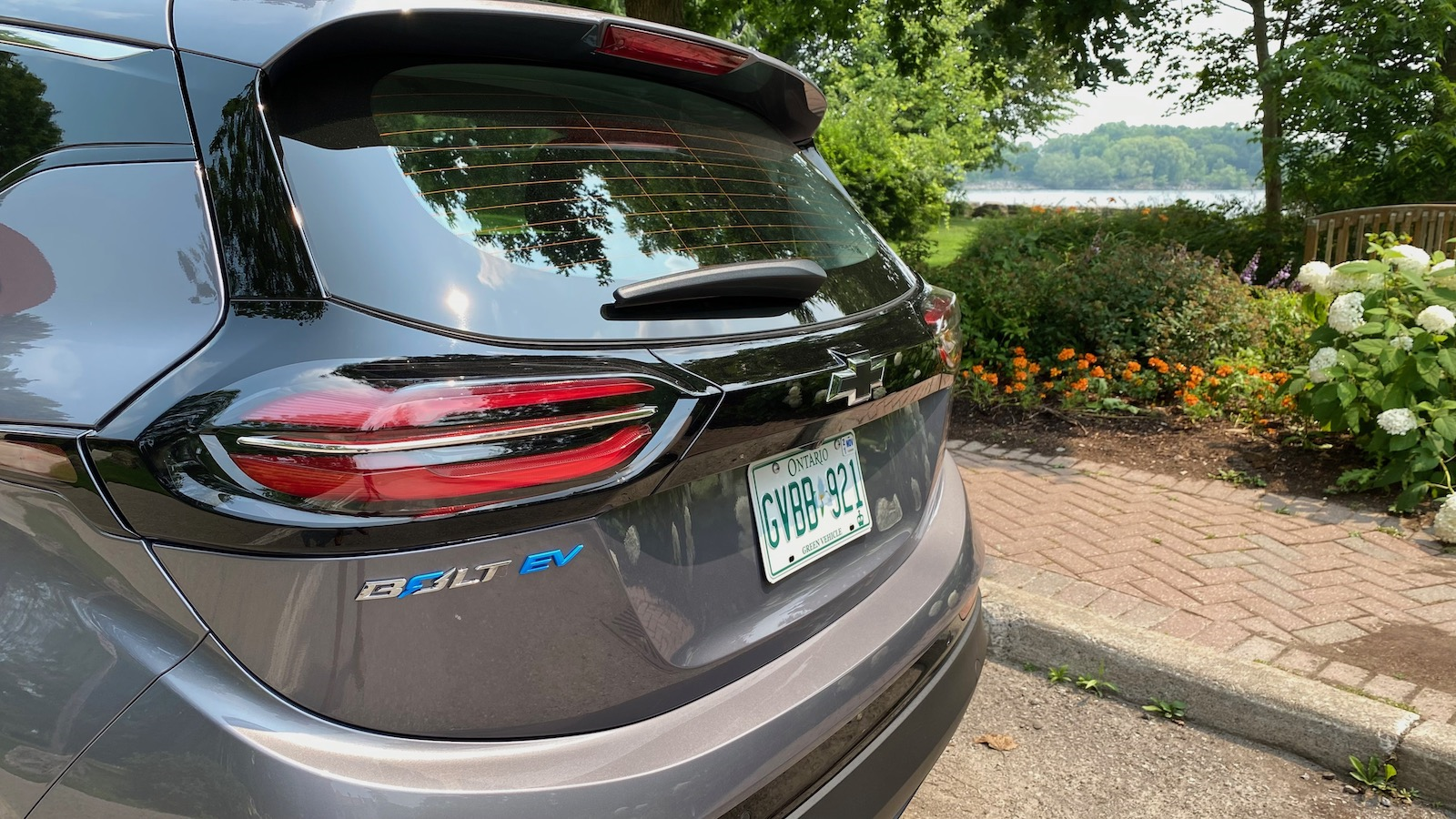 Perhaps the most notable Bolt upgrade is a major price cut. GM has chopped roughly $7,000 off the upgraded Bolt’s former starting MSRP of just under $45k. This may not help current Bolt owners with their resale value, but it does give the Bolt the undisputed EV value crown, offering the most distance per dollar of any current battery-electric vehicle.

Another key change for 2022 is that the Bolt now offers a larger Bolt EUV version, which is six inches longer, offers more features, and starts at $40,198, versus the regular ’22 Bolt’s $38,198. Both of them, therefore, qualify for the federal government’s $5,000 EV rebate, and all provincial new vehicle rebates, which are now offered in seven provinces or territories (Quebec, B.C., the Yukon, and all four Atlantic provinces, as of this summer).

The smaller Bolt has therefore become more of a budget offering, with the LT trim the only one available. So you’ll have to go to the EUV if you’d like leather seats, surround-view camera, the rear camera mirror, heated rear seats, and wireless phone charging, among others. 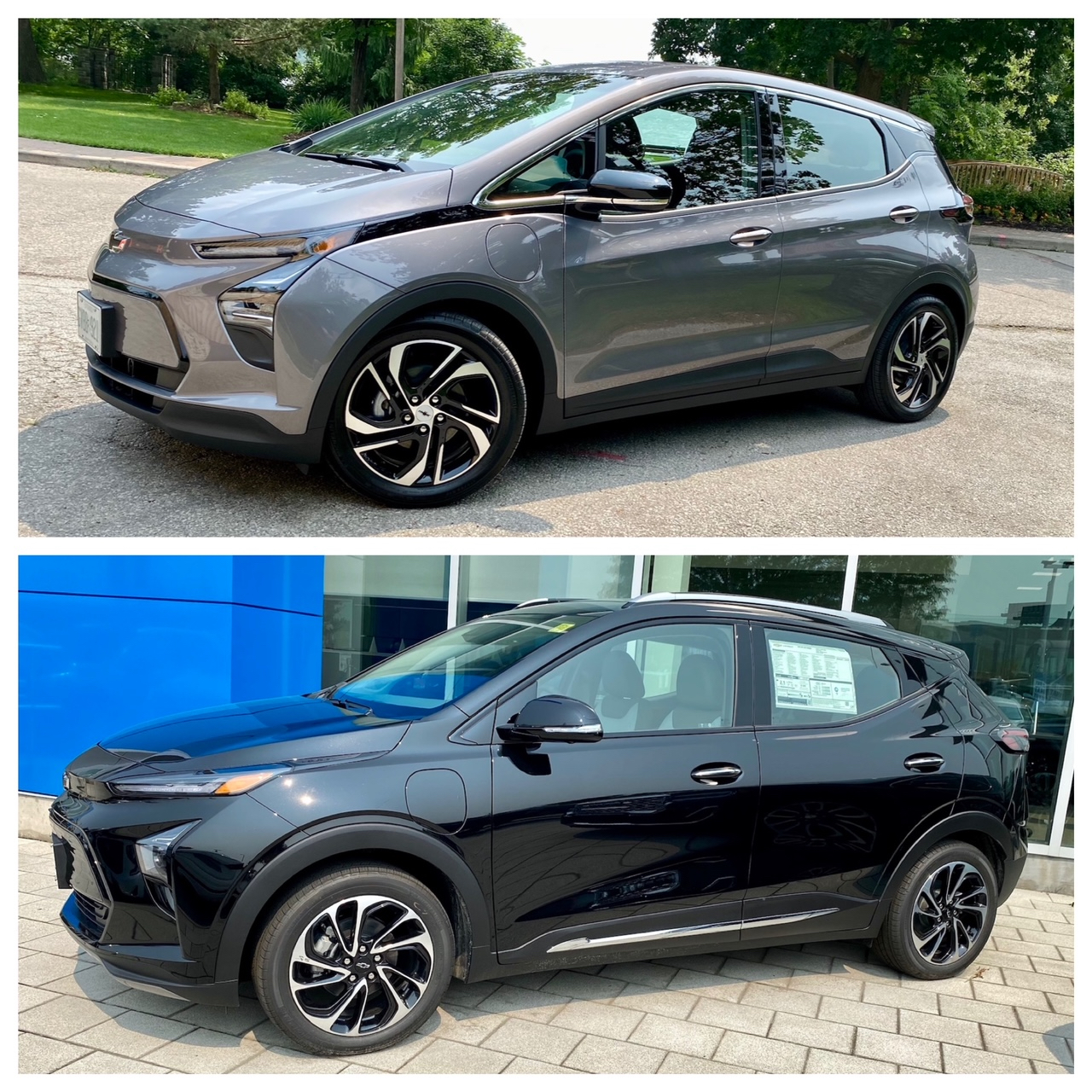 Visually, the Bolt cuts a more modern look, getting rid of its fake grille as a nod to not needing air intake to operate, new wheel designs, and modernized LEDs front and rear.

As a relatively thin but tall-ish compact car, the Bolt’s seats offer decent leg and headroom in both rows, though three-across rear child seats likely won’t work. Those previously lambasted seats are now wider and have more padding – they’re far from Volvo thrones, but a major improvement.

There are also noticeably upgraded soft-touch materials on the dash and doors that no longer yell out bargain-basement plastic. The windshield is steeply sloped to help with aerodynamics, while the resulting A-pillar has a secondary support beam with a glass ‘island’ to help visibility, instead of making it an extra thick pillar. 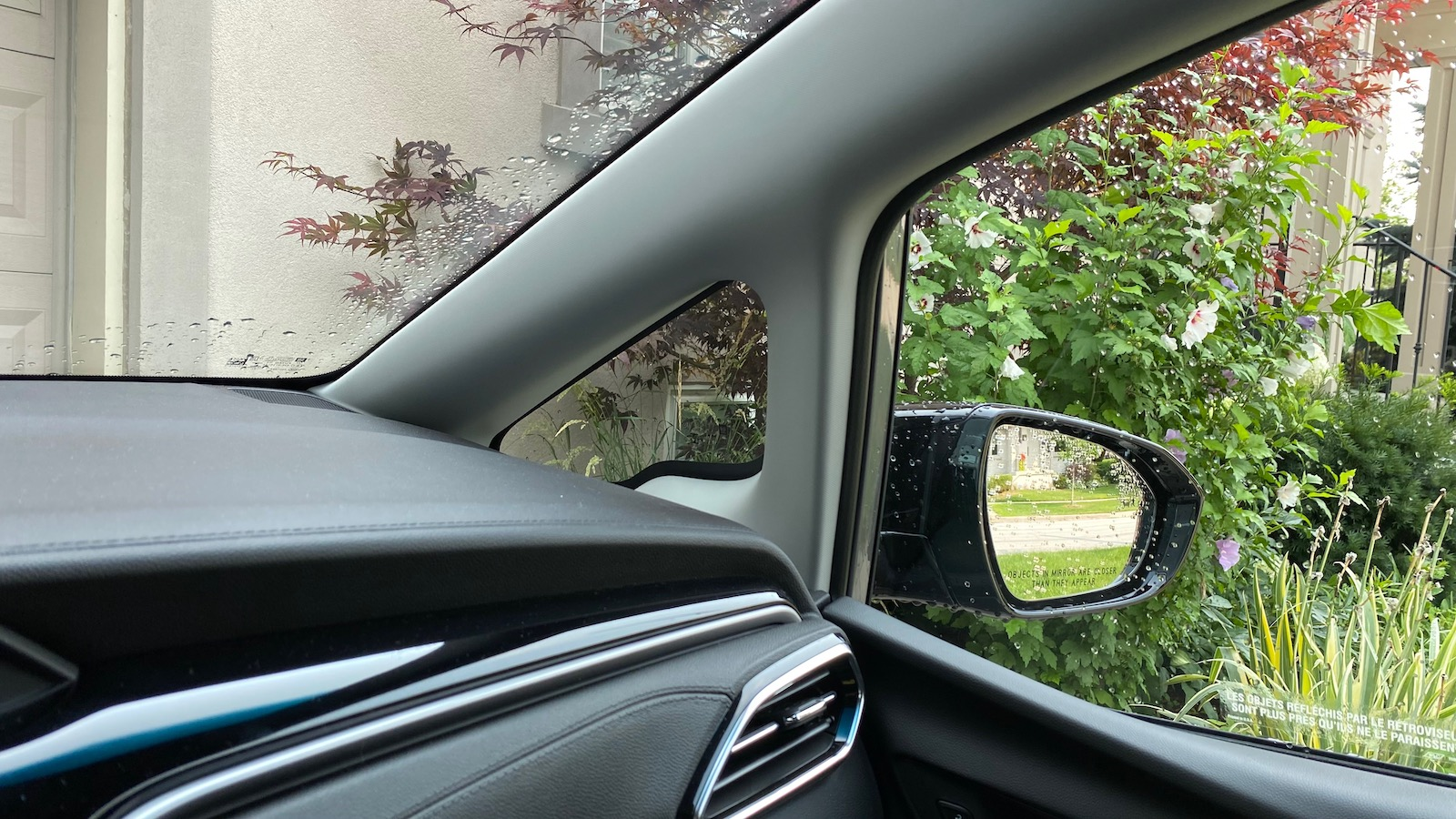 Unlike many EVs, even pricey ones, the Bolt also gives you onboard satellite radio and AM radio stations – the former useful on long trips, the latter welcome for urban dwellers who prefer their local talk and sports radio without having to go through streaming or various apps.

Once on the road, the Bolt’s 200 hp and 266 lb-ft of torque available right from rest still gives it hot hatch-worthy acceleration. It’s easy to point and squirt the Bolt through traffic, with enough power to unintentionally chirp those tires from a stop.

Another upgrade for 2022 is a new one-pedal driving button, just under the other transmission buttons that have replaced the former shifter. It increases brake regeneration quite a bit, to the point where just easing off the accelerator is enough to slow down. Since it feels like driving in second gear, this is not good for drivers or passengers prone to car sickness. Driving in regular D mode offers the usual freewheeling on lift-off and ‘creep forward’ low-speed behaviour that most drivers are used to from time immemorial.

It’s great that Chevrolet offers this easy choice, as some companies like Tesla have now removed the ‘normal’ car-driving option. Some EV drivers argue that the extra regeneration and range is worth the slightly more lurch-like drive experience, but I preferred to use the Bolt’s regeneration paddle behind the left side of the steering wheel to generate some extra electrons. This effectively feels like the electric equivalent of downshifting to slow down, though there is a heavy-handed on-off feel to the regen paddle. 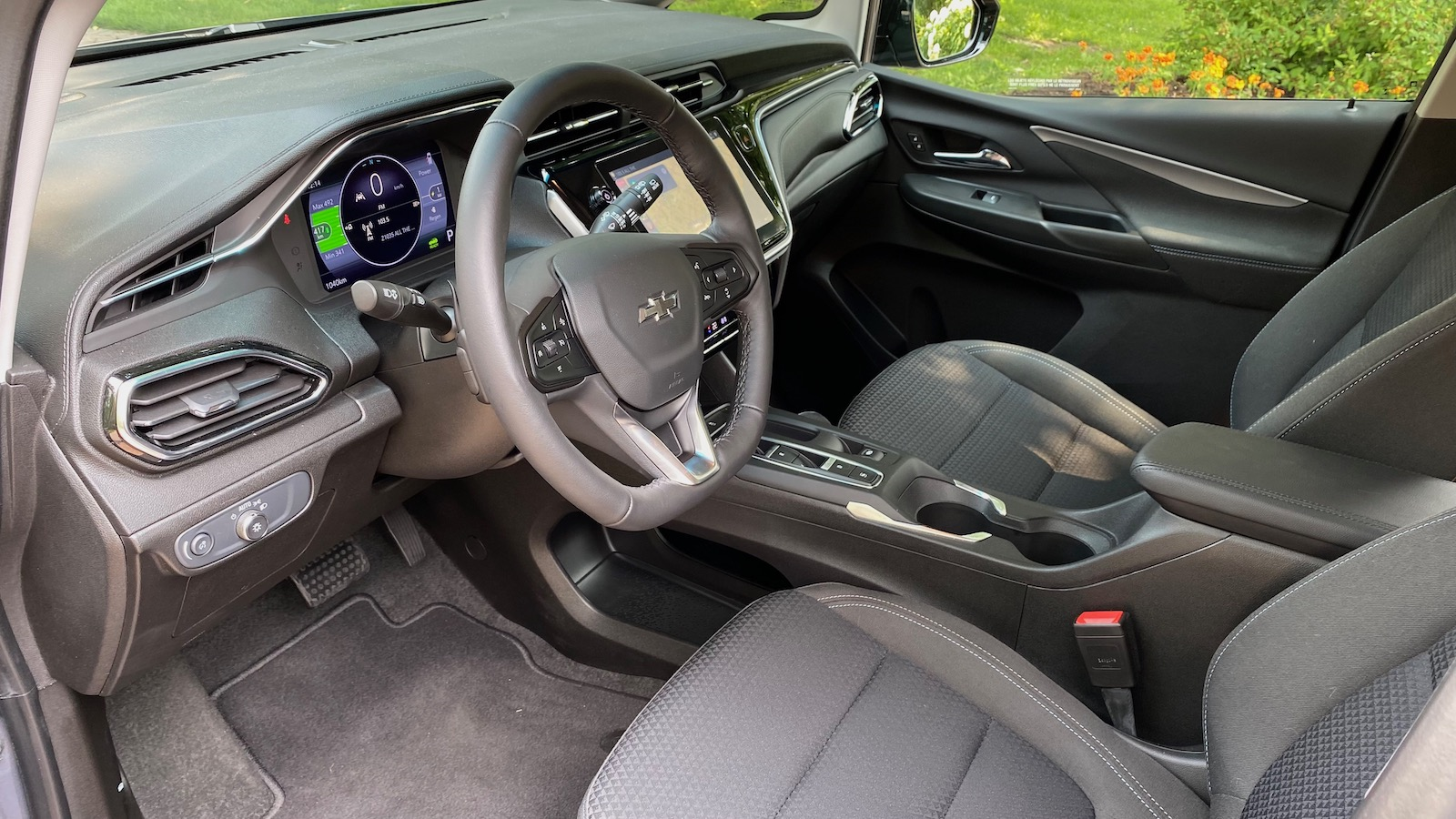 With its 65 kWh battery, the revised Bolt’s 417 km of official range is amongst the most range of any non-Tesla EV available today, and more than some luxury models costing more than twice as much. At the time of publication, there was an ongoing recall for all Bolts, including 2022 models still at dealers, which had started out as a recall on 2017 to mid-2019 Bolts for potential fire risks with its Korean-built LG batteries but has since expanded to include all models.

GM has publicly committed to replacing affected battery modules and extending those battery warranties from the time of installation of new modules. Those Bolt owners will essentially receive fresh new or possibly refurbished battery cells in their vehicles, leaving items such as the battery case, wiring, or the battery computer, which are unaffected by the recall. But in the meantime, GM advises current Bolt owners to take certain precautions: limit charge to 90 per cent, avoid depleting the battery past 113 km (roughly 30 per cent charge), park their vehicles outside after charging, and don’t leave the Bolt charging indoors overnight.

GM has stated publicly that it expects the Bolt’s full range to be available after the battery module updates. Canadian owners can find more information about the Bolt recall here. 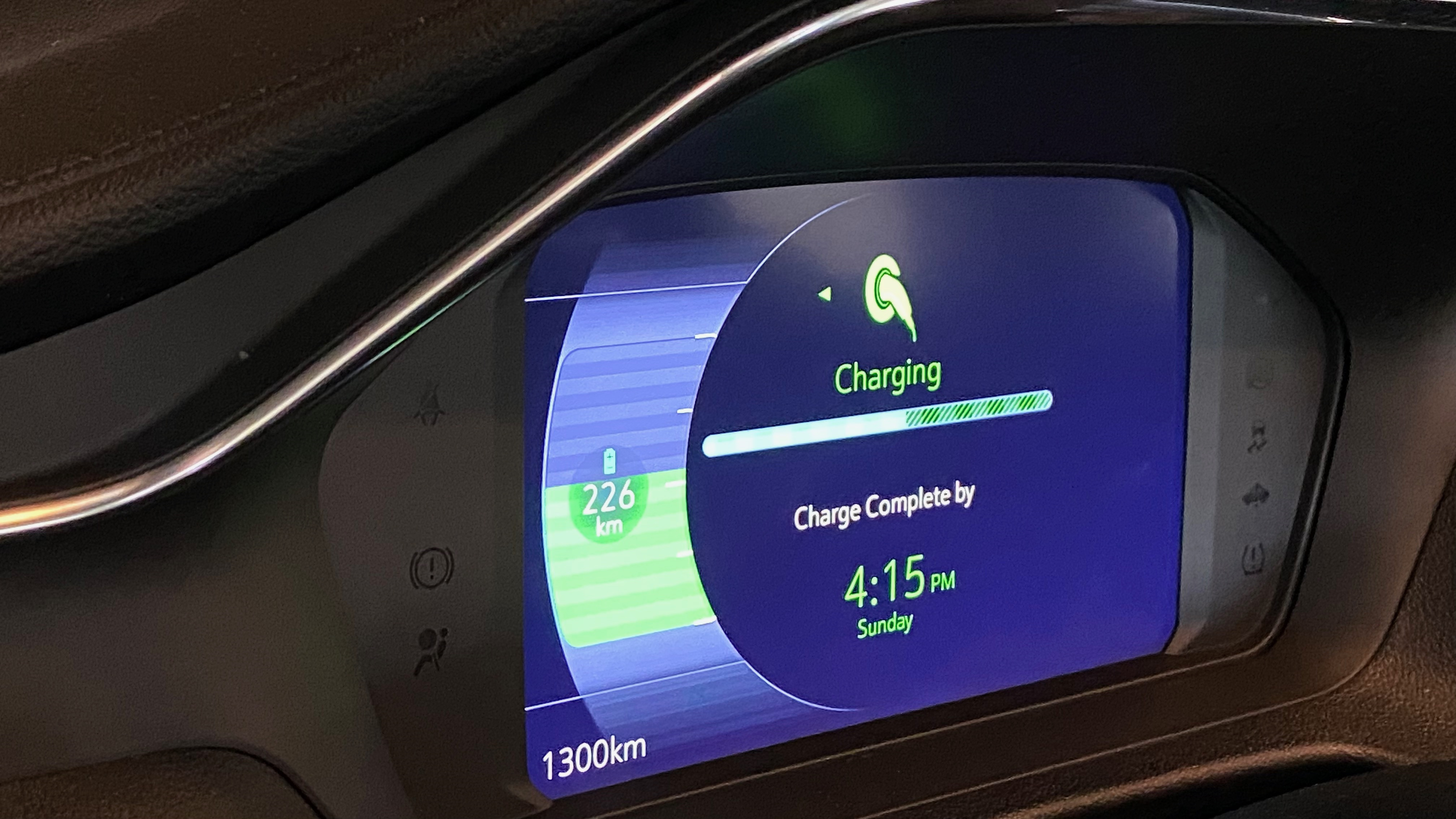 Even with that full 417 km range, it falls behind other BEVs when it comes to road-tripping ability. GM doesn’t like to quote a peak quick charging speed, which remains roughly the same at 55 kW, though some have reported quick flashes of 59 kW speeds may be possible. While using its standard CCS quick charger at Level 3 stations, I didn’t get more than 41 kW in a couple of quick charge sessions, but I was already over 50 per cent charged. GM estimates quick charging can add up to 160 km of range in 30 minutes, still at the low end of the quick charging spectrum.

There’s also still no native GPS in the Bolt, which is now at least available on the EUV, but at least Apple CarPlay and Android Auto is now wireless. The small Bolt’s lack of wireless charging means you’ll likely plug in your smartphone on trips regardless. 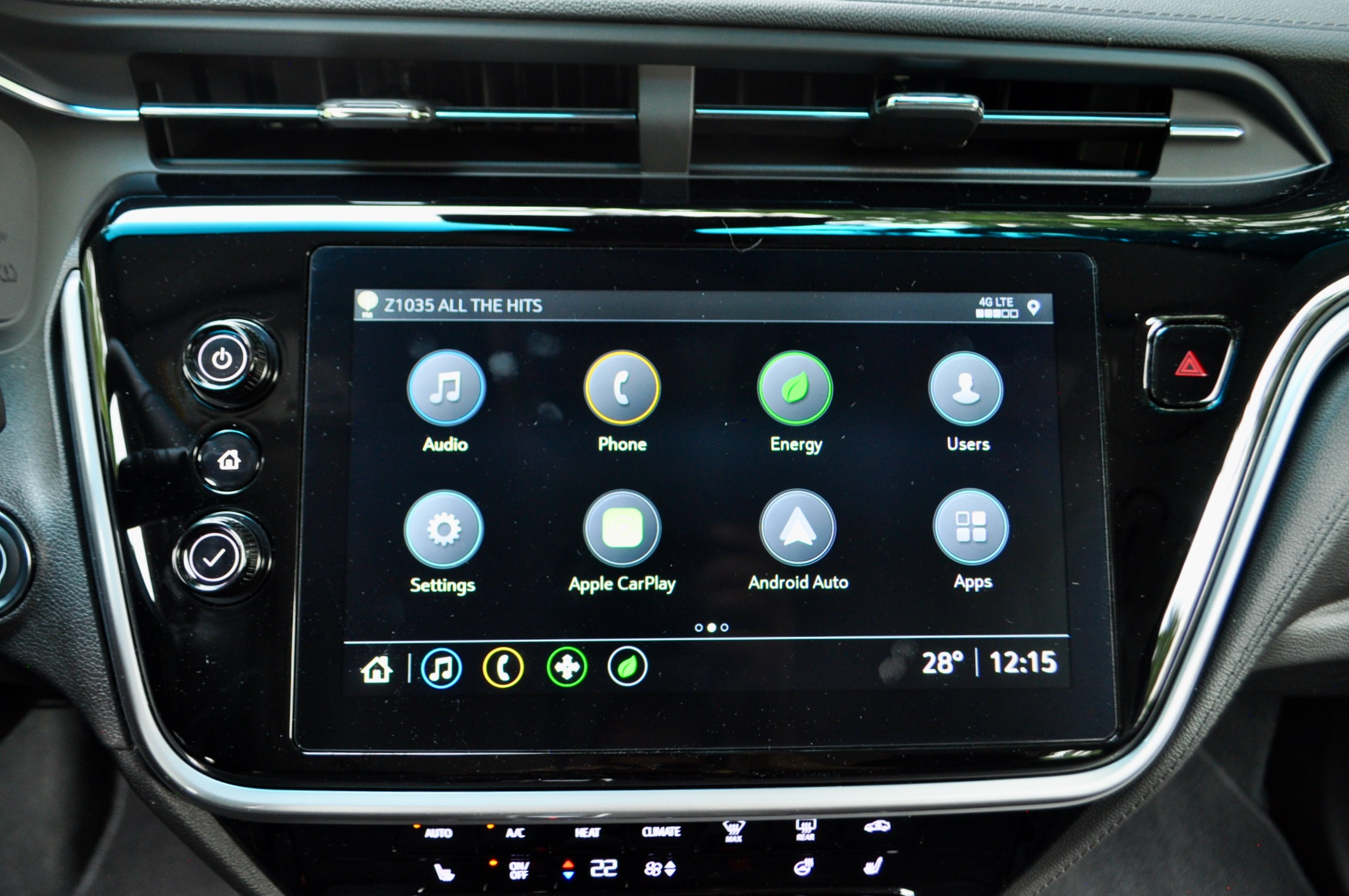 Sadly, even adaptive cruise, as well as Super Cruise, is reserved as options for the Bolt EUV, as is a welcome new power panoramic sunroof.

For the much more common at home charging, the Bolt comes with a charge cord that can trickle charge at any 120-volt outlet, while a dual-level charge cord (standard on EUV) is an option that can charge at 240 volts, without the need for a separate wall-mounted charge station (EVSE). GM actually has an offer now until (at least) the end of the year to help new Bolt buyers pay for the necessary electrical 240-volt upgrade costs, a program detailed here.

In short, GM Canada will pay installation costs of a dryer or stove plug (a NEMA 14-50) at your home, 40-amp breaker panel, weatherproofing and permit charges, up to a value of up to $1,500, so that you can use the dual-level power cord instead of having to buy an EVSE separately. Alternately, Bolt buyers can opt for a $1,500 installation credit, and use the saved money to upgrade their service or buy an EVSE for their home or a secondary residence. Or new Bolt owners can opt for $750 in charging credits at FLO public charging stations. 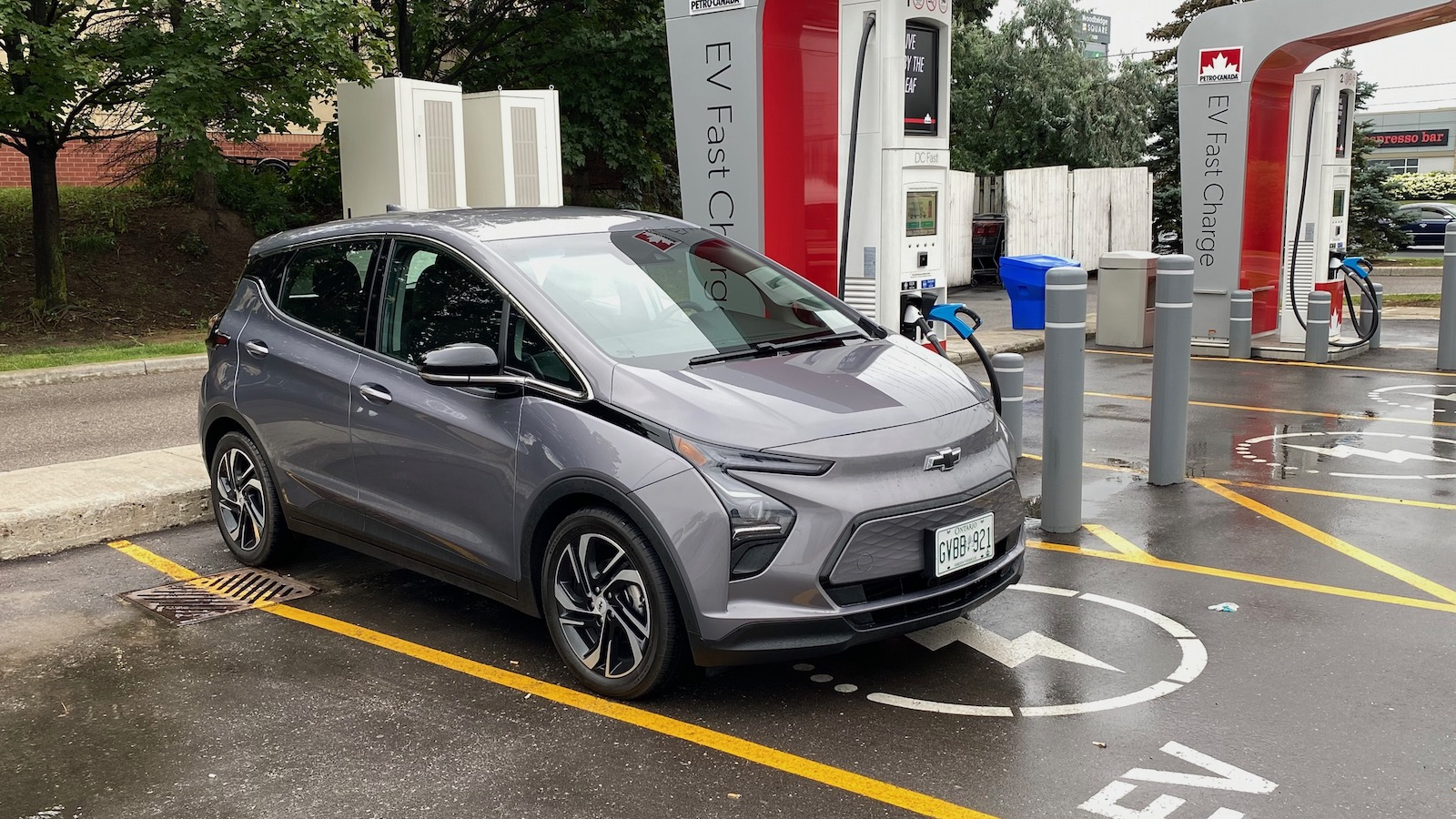 If you do opt for a 240-volt charging EVSE (highly recommended), the Bolt can now charge slightly quicker, at up to 11 kW, which will charge a fully depleted Bolt in an estimated seven hours, while its charging speed maxes out at 7.2 kW with the dual-level power cord.

Considering that the 2022 Chevrolet Bolt took away the least expensive BEV in Canada crown from the $40,000+ Mini Cooper SE three-door hatchback is a true eye-opener. This Mini offers a paltry 183 kilometre range to the Bolt’s 417, the Bolt is more practical with its five doors versus three, and the Chevy is still less expensive than the Mini (or any BEV in Canada) as I write this, though lower price EV offerings and new players are likely on the horizon.

In the end, from a purely product perspective, the latest Bolt is an impressive effort by GM to introduce EV driving at a lower price to a wider audience, even if many consumers will want to consider the larger Bolt EUV and its notable comfort and convenience options. GM knows its actions on the Bolt’s battery recall will reflect long-term on its support for electric vehicle owners as well as the rapidly advancing technology itself, and its actions suggest it wants to excel on both. 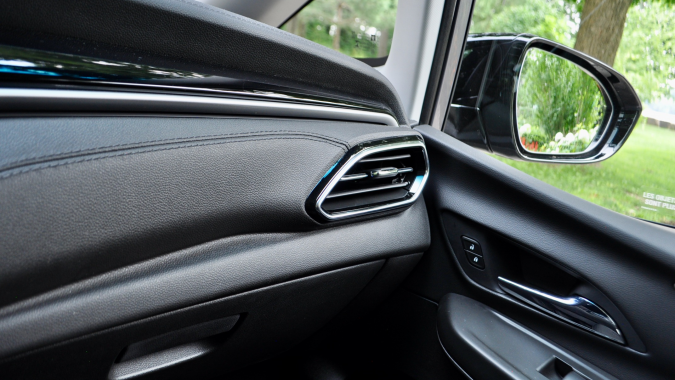 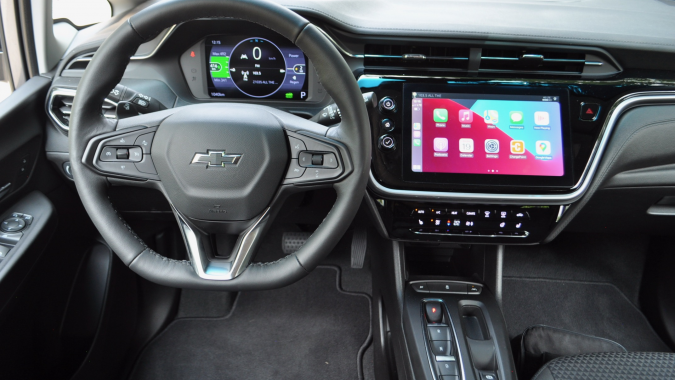 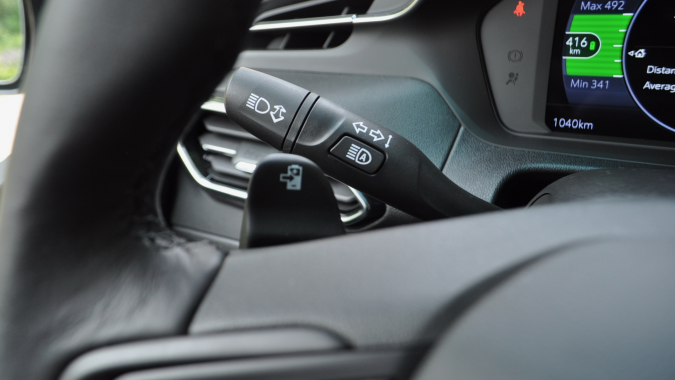 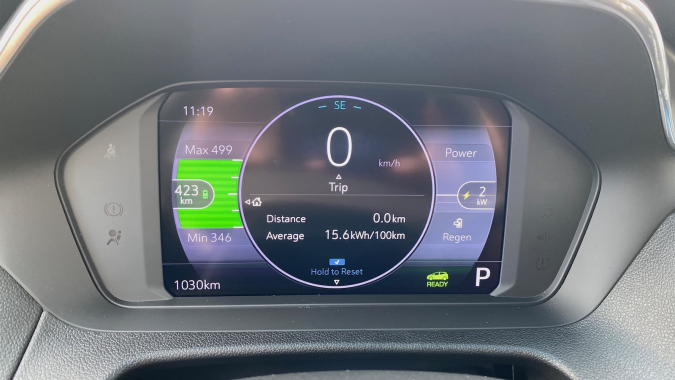 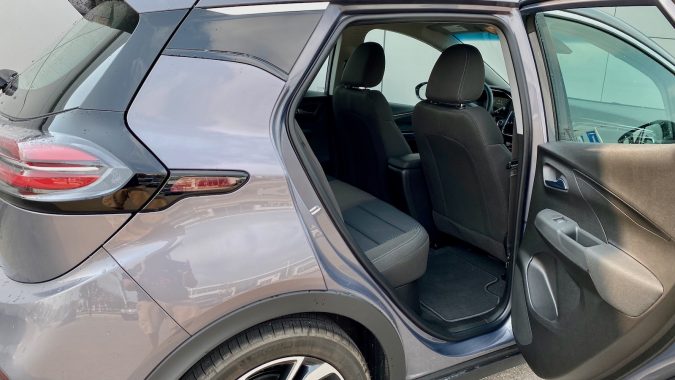 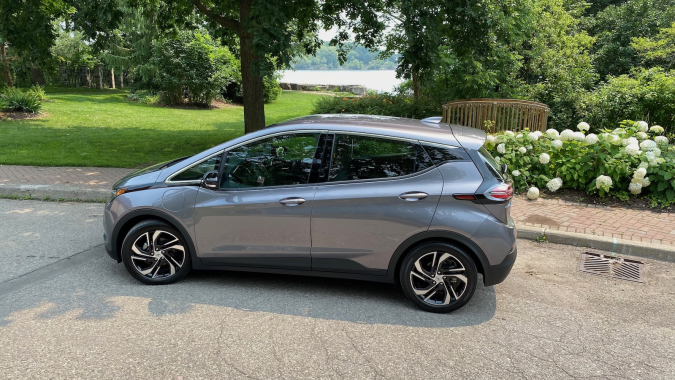 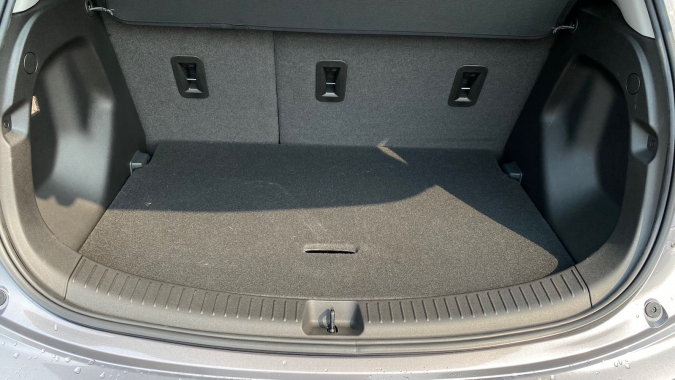