Toyota has upped the ante by introducing what will surely be the most sought-after new hybrid in Canada.

The RAV4 has long been my go-to recommendation for friends and family on the hunt for a reliable vehicle and safe bet on which to spend their hard-earned cash. Hardy, practical, and best of all, drama-free, Toyota’s RAV4 is not only the best-selling compact crossover in Canada, it’s the top non-truck passenger vehicle in North America, period.

And now Toyota has upped the ante by introducing what will surely be the most sought-after new hybrid in the country. The 2021 RAV4 Prime is a plug-in version of its popular crossover offering 68 km of electric-only driving.

Unlike the existing RAV4 Hybrid, which tops up its stored electricity with regenerated energy derived from braking, the RAV4 Prime has an 18.1 kWh battery that can be fully recharged in 2.5 hours using a 240 volt home or public charger, or 12 hours on a 120 volt household current. The RAV4 hybrid can travel up to 2 km on electric power only, but the engine kicks in under hard acceleration and it generally runs on a combination of both. Its total range is 767 km combined, using 7.3L/100 km. 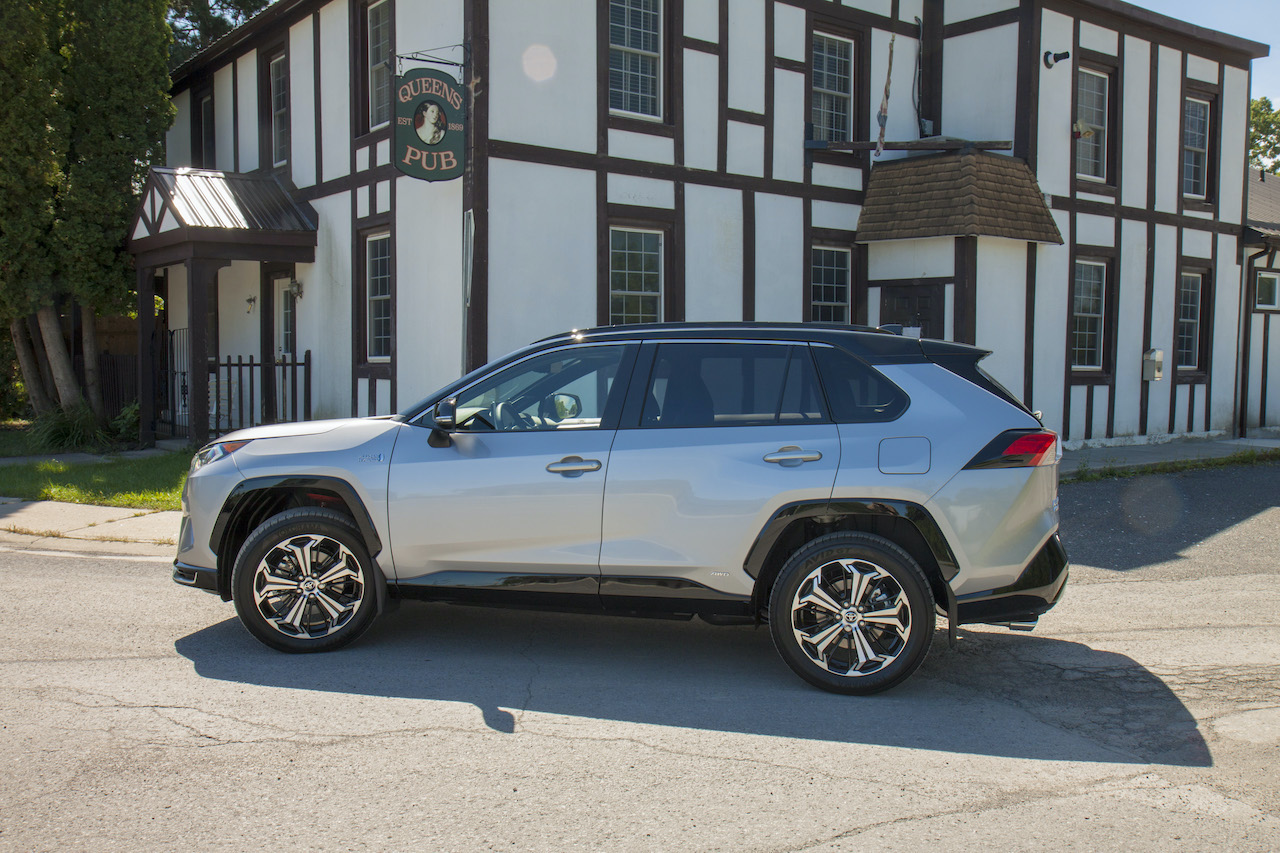 By comparison, the RAV4 Prime’s 68 km of pure EV travel is available up to 135 km/hour and has a total combined range of 979 km while averaging 6.0L 100/km of fuel consumption.

Why then, are we predicting such a high demand for the new RAV4 Prime? Aside from it being such a compelling package (more on that later), it’s all in the numbers. There are fewer than 1,000 vehicles allotted to Canada this year, and most of those have been allocated to Quebec, where it’s on sale now. The rest will arrive in British Columbia before the end of the year.

Which means most of us won’t see the RAV4 Prime in local dealerships until 2021, and even then, their limited numbers, probably between 3,000-4,000, means they’ll be snapped up quickly. This is largely due to a lag in battery production. A joint venture between Toyota and a supplier they’re reluctant to name, the 18.1 kWh battery is a new technology hamstrung by current manufacturing constraints. Then there’s the vehicle itself, which is produced solely in Japan. Gasoline and hybrid versions of the RAV4 are already being built here at the Cambridge and Woodstock plants, but they’re already operating at capacity and would require enormous investment to add the RAV4 Prime to their output.

Whether that happens depends entirely on demand. And that demand depends on an entirely different set of numbers. The RAV4 Prime’s base price of $44,900 squeaks in just under the $45,000 limit for the $5,000 federal electric vehicle incentive. Add Quebec’s whopping $8,000 rebate for a combined total of $13,000, and you can see why most of the available vehicles will be heading Quebec. That means you could conceivably pick up a plug-in Prime for only $3,000 more than a regular, base RAV4. The Prime gets you nearly 1,000 km of range at 6.0L average fuel cost. It also boasts a 0-100 km/h acceleration time of under six-seconds – making it the second fastest Toyota off the line after the BMW-powered Toyota Supra. 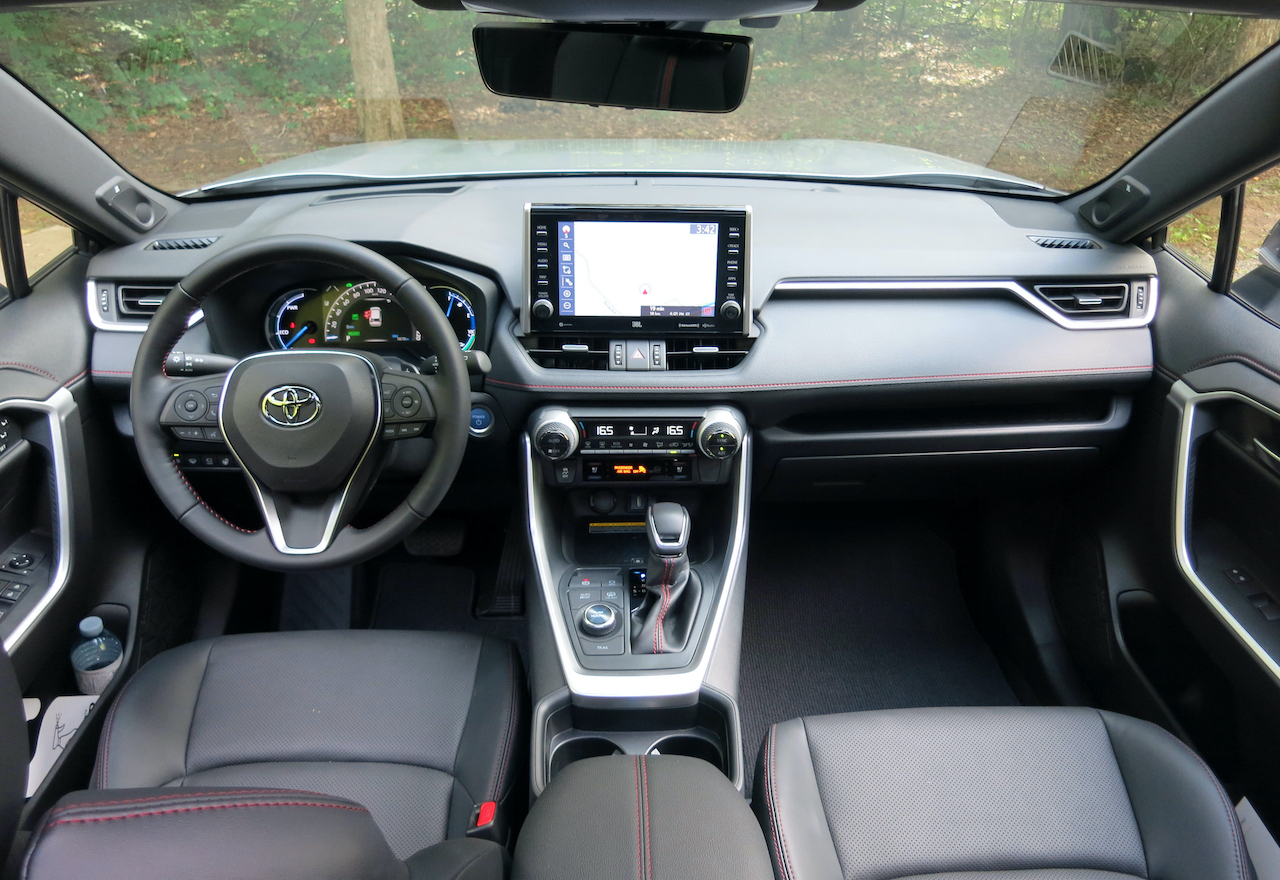 We spent a day behind the wheel of a RAV4 Prime XSE, starting out from Kingston’s historic limestone district waterfront, and cruising the vineyards of Prince Edward County.

The RAV4 Prime’s default drive mode is EV mode, or electric-only, which it can maintain up to 135 km/hr. The driver can also select hybrid-only mode to conserve battery power for later or Auto EV to maximize electric range with the gas motor kicking in under hard acceleration. Bridging the gap between Kingston and Belleville were several kilometres of 401 highway, where I was able to confirm the electric powertrain’s upper limit.  Exiting the highway and gliding to a stop at the first set of lights, I can also sheepishly attest that the RAV4 Prime will chirp its tires off the line with an over exuberant application of the throttle.

The 1,920 kg Prime feels a lot more powerful than its 2.5L, 177 hp 4-cylinder engine would suggest, thanks to a trio of electric motors – two in the front transaxle and one in the rear – that bring the total power up to 302 horsepower. The rear electric motor also drives the on-demand all-wheel-drive – another item in the RAV4 Prime’s plus column over some of its front-wheel-drive only competitors.

To differentiate the RAV4 Prime from its conventionally powered siblings, Toyota has given it a unique grille and chrome metallic lip, vertical driving lights, blue trimmed badging and a painted diffuser. For the first time on a RAV4, the Prime introduces adaptive headlights. 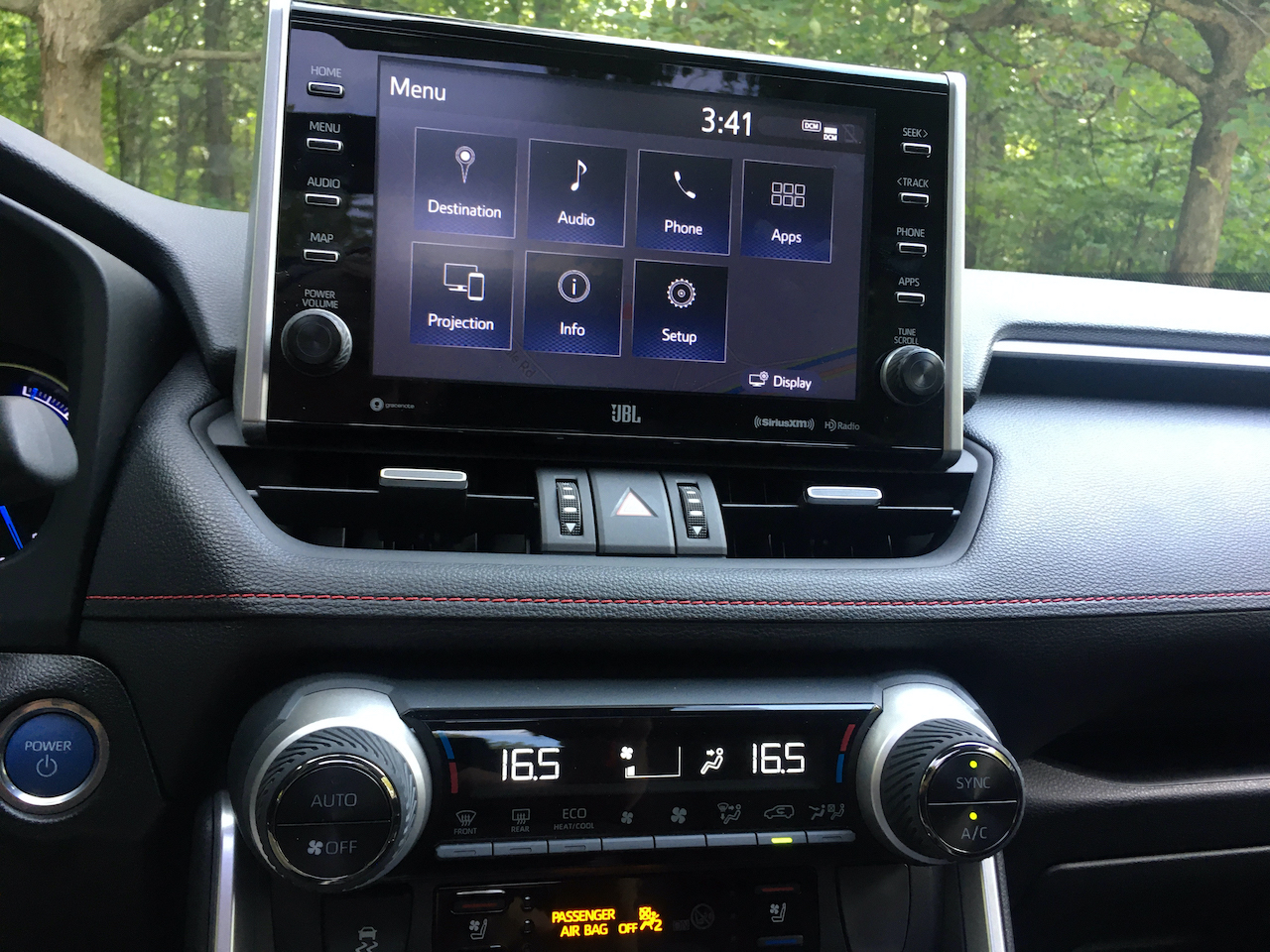 Standard for the first time is Apple CarPlay and Android Auto on an 8-inch touchscreen, or optional 9-inch screen on upper trims. Also new for RAV4 is an adjustable head-up display, and a one-year free trial of Toyota’s $9.99/monthly connected services that use a smartphone app to monitor charging, set climate controls for remote start, or find information about available local charging stations.

The RAV4 Prime is a comfortable place to spend the day, with nicely bolstered, eight-way adjustable driver’s seat, great visibility, and simple ergonomics that feature prominent, easy-to use control knobs instead of needlessly complex graphics. It offers plenty of head and leg room for all four passengers, although cargo space drops from 1,064 litres to 949 litres thanks to the battery pack. 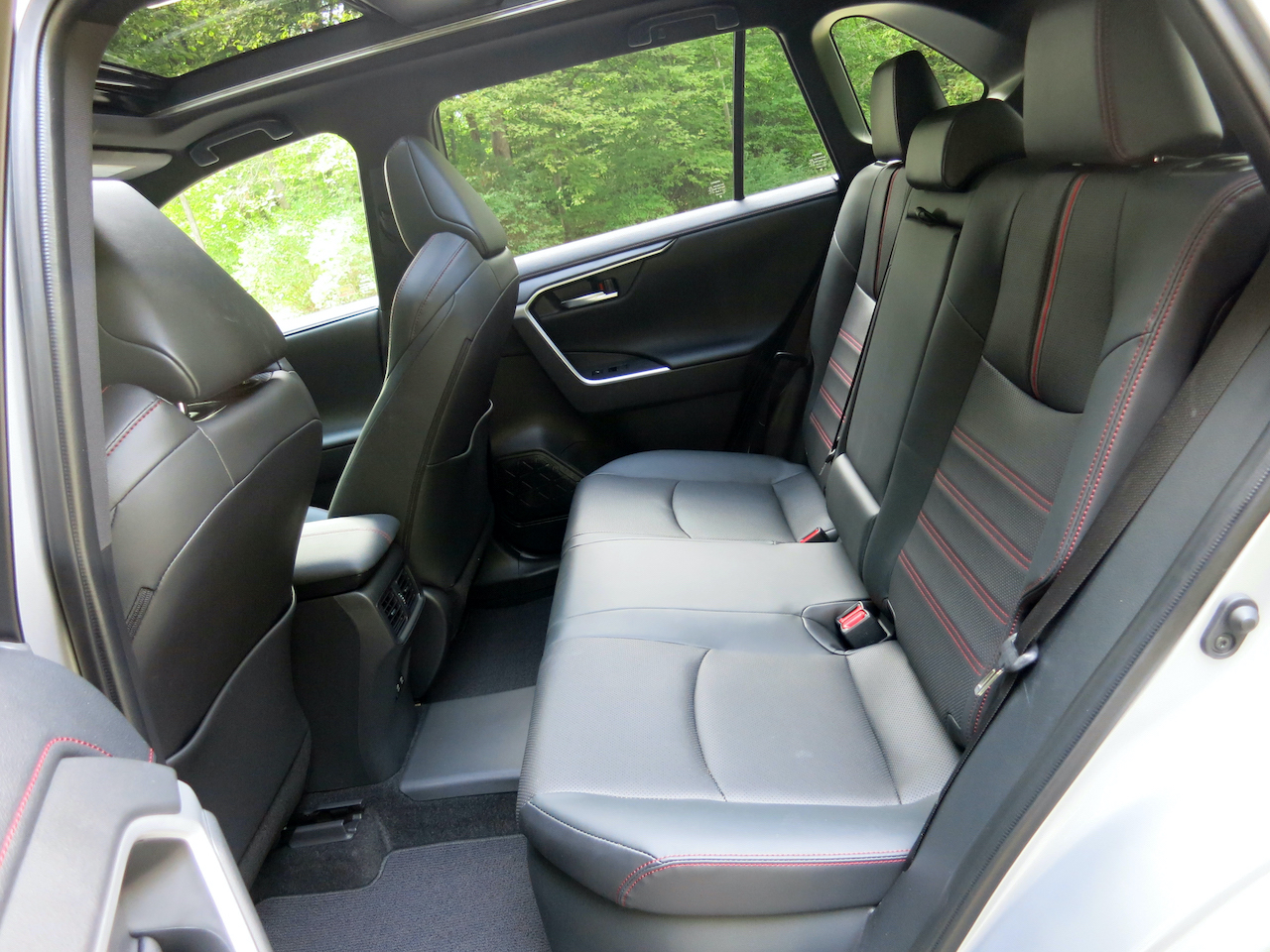 In EV mode only the RAV4 Prime is of course, very quiet and helps showcase the optional JBL sound system. When the 4-cylinder engine eventually kicks in, it does so fairly smoothly. The driver can opt to gear down using the paddle shifters, or just let the continuously variable transmission handle it. Under gasoline power, I regularly saw 4.9L of fuel consumption on the highway and finished with an average of 6.2L /100 km overall. Electric only travel slightly exceeded the claimed 68 km at nearly 70 km, and a more careful driver could conceivably do a lot better. Of course, those numbers will change during the winter, where cold weather seriously compromises overall battery range. Then there’s the additional drain of cabin heat, though a frugal driver could extend range using seat and steering wheel heaters with only minimal draw.

With incentives, the Toyota RAV4 Prime is an extremely compelling offering with only the Ford Escape, Mitsubishi Outlander, and Subaru Crosstrek its only plug-in competitors. Its closest rival is the Escape PHEV, offered in front-wheel-drive only.

Going strictly by the numbers, the RAV4 Prime is one of the most impressive new vehicles on the market today, and one of the most frustratingly unobtainable– unless you’re one of the lucky buyers able to snap up one of the first available models.