Third-generation Lexus IS is more than a mere facelift. It is an evolution of a solid brand.

2021 sees the third-generation of the Lexus IS receive yet another facelift, having also received one for the 2016 model year. This facelift, though, is much more comprehensive than previous.

We’ll get to that in a minute but first, it’s nut n’ bolts time.

Every IS gets wider fenders and comes with unique detailing such as a full-width light bar ‘round back, newly-styled and much more aggressive headlamp lenses and a lower, wider version of Lexus’ signature hourglass grille. When seen from head-on, those fenders coupled with that grille serve to lower and widen the car quite noticeably. It’s undeniably “Lexus” but it fits well within the line-up and that’s a big achievement since so many of the IS’ siblings – ES, LS, RX – have had full redesigns more recently than the IS has. This is a good-looking exterior, especially when finished in the gorgeous Matador Red Mica that my tester was. 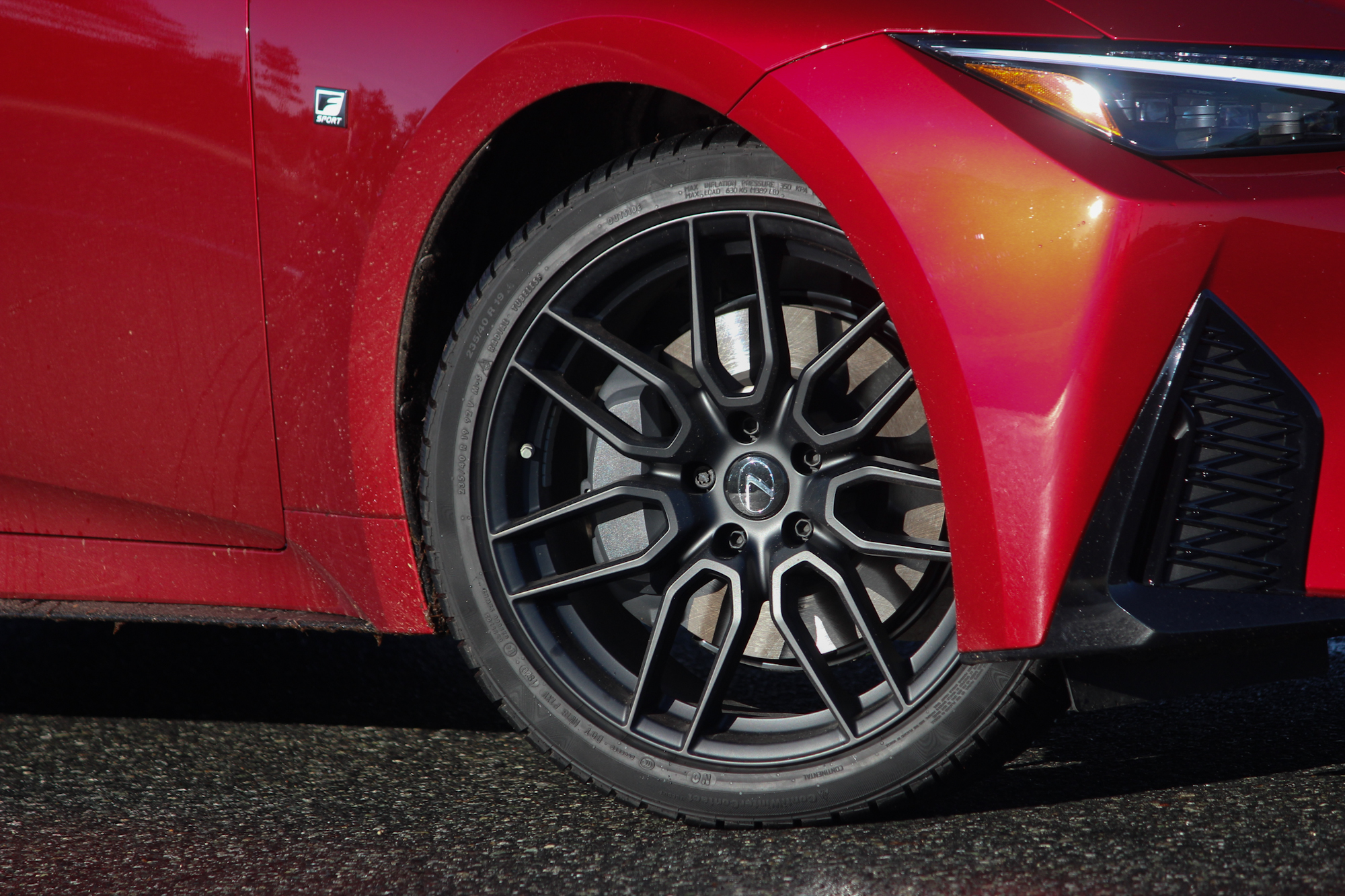 The interior is also notable in the styling-sense not because it’s changed so much, but because it’s hardly changed at all; you still have the same drive mode selector, the same climate controls, the same shift lever and the same gauge cluster.

Indeed, when I first picked up my tester I had to get out and double-check to make sure I wasn’t dreaming, that I was actually in the 2021 car. Back inside, I eventually did notice the addition of an optional new 10.3-inch infotainment display (an 8-inch is standard) with Apple CarPlay and Android Auto, new wood finish sprinkled on various cabin bits and the addition of a touchpad infotainment controller as opposed to the joystick we used to have. The system is still somewhat janky and could be more intuitive, though; much of the competition does a better job in this regard.

I am, however, a fan of how the dash rises up around the driver and how the seats are super supportive and comfortable; the seat design remains one of the best in the segment, right up there with the Zero Gravity Seats found in the Infiniti Q50 and ultra-supportive examples you get in the BMW M340i. The view out is also spot-on and seeing those widened fenders extending ahead of you looks great and makes the IS that much easier to place on the road and during parking manoeuvres.

Like the interior, the powertrain hasn’t changed much past the “Lexus Intake” that brings a little more engine noise into the cabin (it does sound quite good at higher revs, almost Toyota GR Supra-like). The V6 in the IS 350 is rated at 311 horsepower and 280 lb-ft of torque – same as before – fed to all four wheels through a six-speed automatic box that comes with paddle shifters. Four-cylinder models, meanwhile, get an eight-speed. 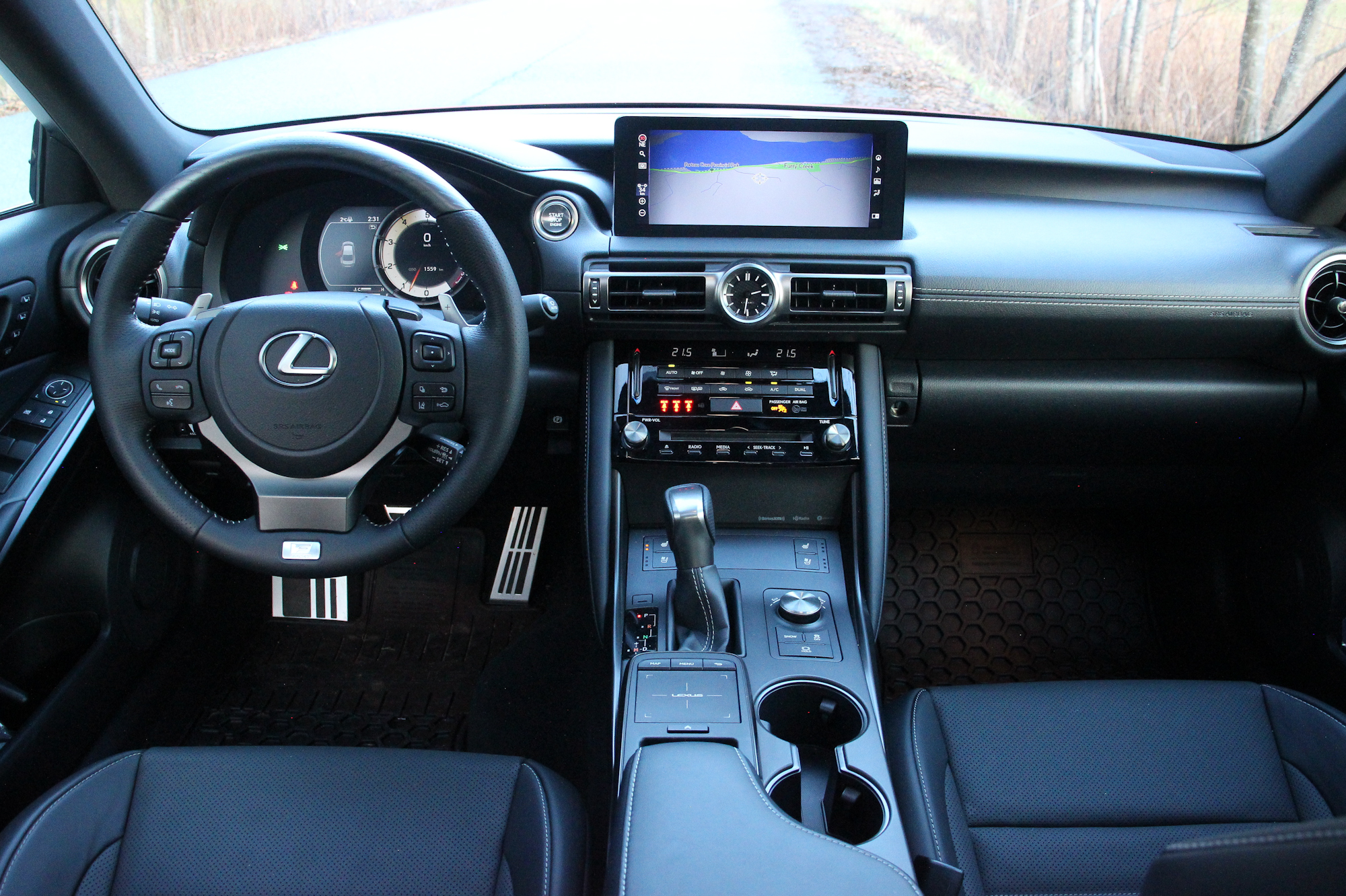 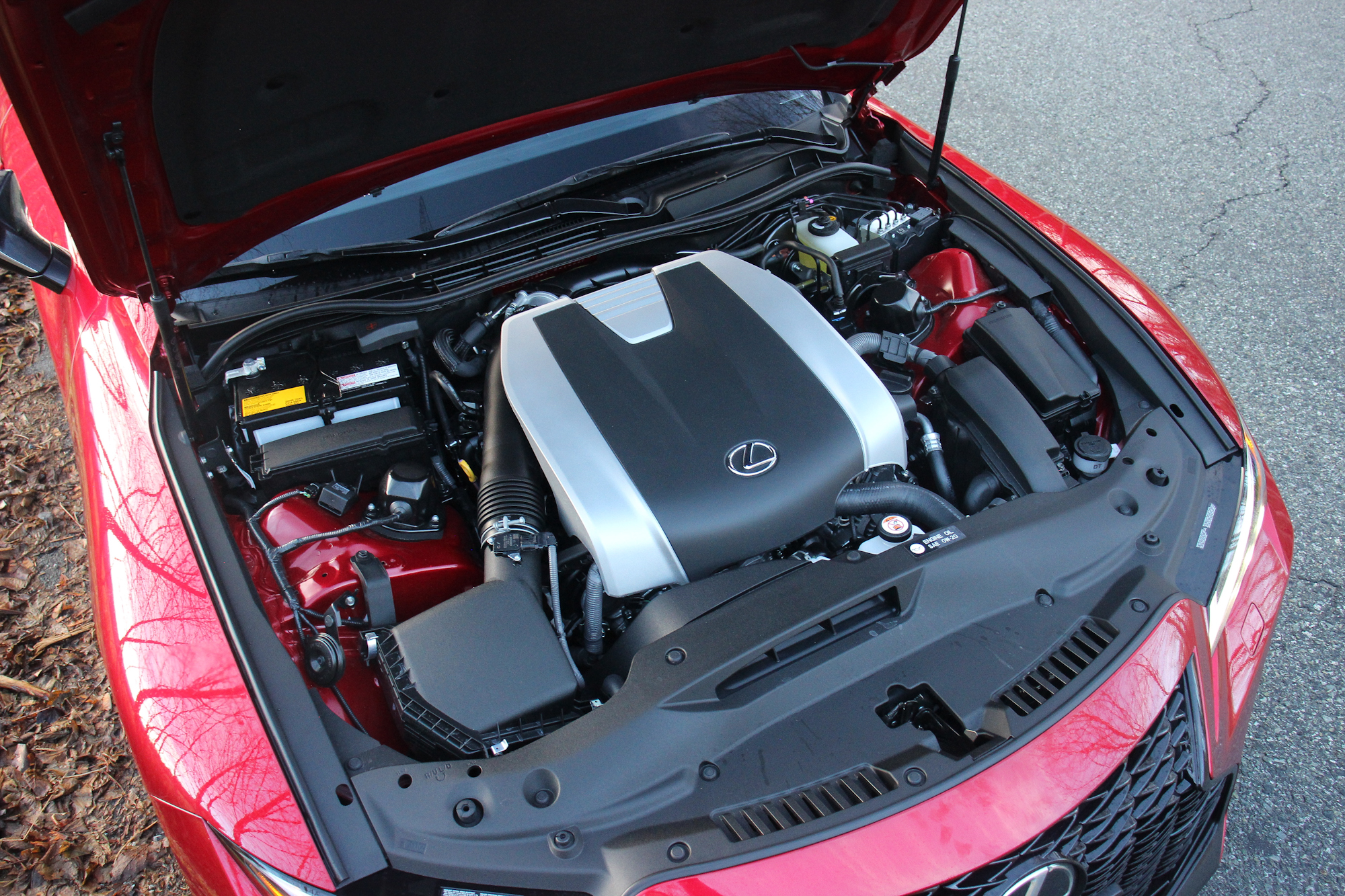 The engine isn’t super-keen to rev, but the power delivery is smooth and devoid of the peakiness you might get from a turbocharged ‘plant. It makes forward progress brisk but its attitude is a little more “grand tourer” than “all-out sports sedan”; indeed, with just six gears, the gearing is long so there’s a little more time spent between shifts than you’d get in the likes of the BMW or Genesis G70. Once at speed, though, the IS rides a nice wave of torque so you do get the power you need for highway passing and so forth. You’ll never get the hair-on-fire thrills you would get from other, more focused sports sedans, though.

While the powertrain returns mostly unchanged from 2020, the chassis has been given a proper once-over in an effort to give the IS that much more athleticism, especially in IS 350 F Sport Series 3 spec seen here.

They’ve stiffened up the chassis with better welding, lightened a number of components including the springs and anti-roll bars and that’s not all; they’ve also added the Dynamic Handling Package which adds adaptive dampers, special 19” BBS alloys, carbon fibre spoiler (soon; it’s not available at launch, which is why you don’t see it on my tester) and mirror caps, Torsen limited-slip differential and to top it all off, a Sport + drive mode that sharpens steering, throttle and transmission response. And gives the tach a cool white bezel.

This is all thanks to the development of a new test facility in Japan that Lexus says has been designed to reflect certain portions of the Nurburgring Nordschleife. So while this hasn’t been tested at the ‘Ring, Lexus will say that it has done at the next best thing. 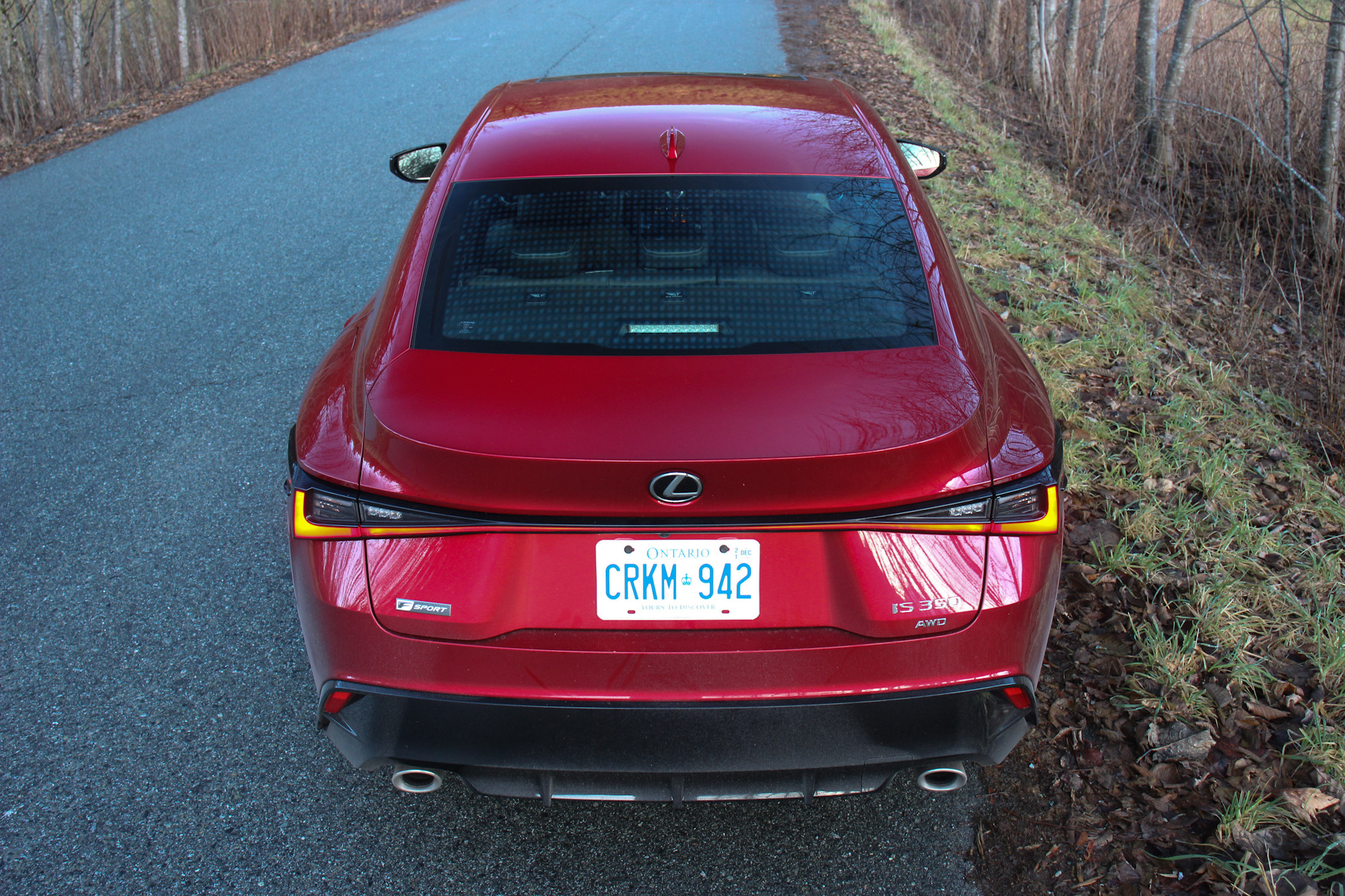 They aren’t just whistling dixie, either. I always found the older IS to feel just a little heavy through the bends and they’ve done well to sharpen things up. You can’t feel a whole lot through the wheel but you can through the seat of your pants, and that’s a fine compromise, far as I’m concerned.

Even though the front end is wider, it responds well to steering inputs and provides reduced body roll all at the same time. Of course, the dampers also have something to do with that but to me, the bigger add from those adaptive dampers is just how well they kept each individual wheel in check. On one of my favourite test routes, ruts and tarmac sags that are jarring in many cars were almost completely neutralized by the IS, making for some incredibly confidence-inspiring progress. Lexus is a brand that creates impeccably riding luxury cars, and you can tell that was not lost on those that designed and engineered this latest IS evolution.

Which is what it is, really: an evolution. They’ve done a number on the chassis, but leaving the powertrain untouched (and the interior, but that doesn’t bother me so much) as they have does deaden the impact of that. A new engine and maybe a faster-shifting transmission would to a whole lot, here, but it looks like we’re going to have to wait for an all-new IS for that.