I realize the Wagoneer is making a comeback, but I think the biggest deal in Jeep Land in 2021 is the all-new fifth generation Grand Cherokee, and for one main reason.

The Grand Cherokee is a reliable volume seller for Jeep in North America – as of June 30 it trails only the Wrangler (narrowly) for the leadership of brand sales in Canada, with 8,681 sold, a 27 per cent increase over last year. Oh, and it sold in excess of 209,000 units in the U.S. in 2020, during a pandemic.

The above-the-fold news here is the Grand Cherokee is being split into two model lines, regular (two-row seating) and long-wheelbase (three-row), or L. The latter is a first for Grand Cherokee. 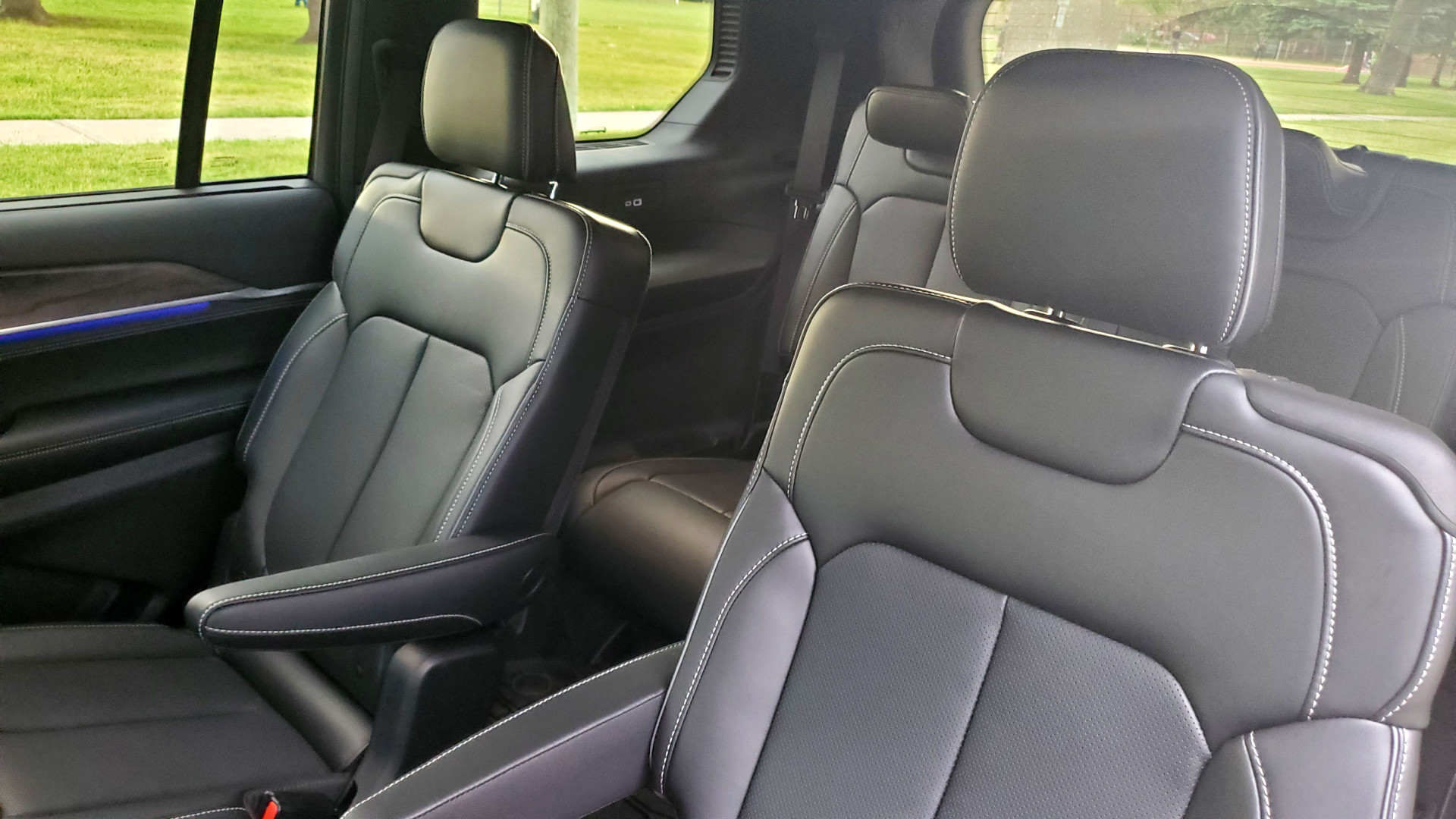 The L, subject of this story, is arriving at dealerships now. The two-row model will debut later in 2021, as will an electrified 4xe variant, but as of this writing, neither have been shown by Jeep yet. Both should have a lot in common with the L, however.

Before I get going, a few things to keep in mind regarding my driving impressions. In late June, I drove a U.S. pre-production mid-range Overland Velvet Red Pearl tester with a Global Black Nappa leather interior. The unit was in my possession for about 36 hours, and I put roughly 340 kilometres on it.

About half was highway, but thanks to the drive route arranged by Jeep Canada, the other half came on a mix of local roads in and around Port Hope and Cobourg and off-road trails near Baltimore – the one in Ontario, not Maryland.

For Canada, the 2021 Grand Cherokee L is available in five grades, including two with late availability (see chart below). All models sold here come with standard 4×4 with an eight-speed automatic transmission sourced from ZF (8HP70), the only gearbox available. Two engines are offered: the standard 3.6-litre Pentastar V6 (290 hp / 257 lb-ft) and the 5.7-litre V8 (357 hp / 390 lb-ft), which is available as an option for Overland and Summit grades. 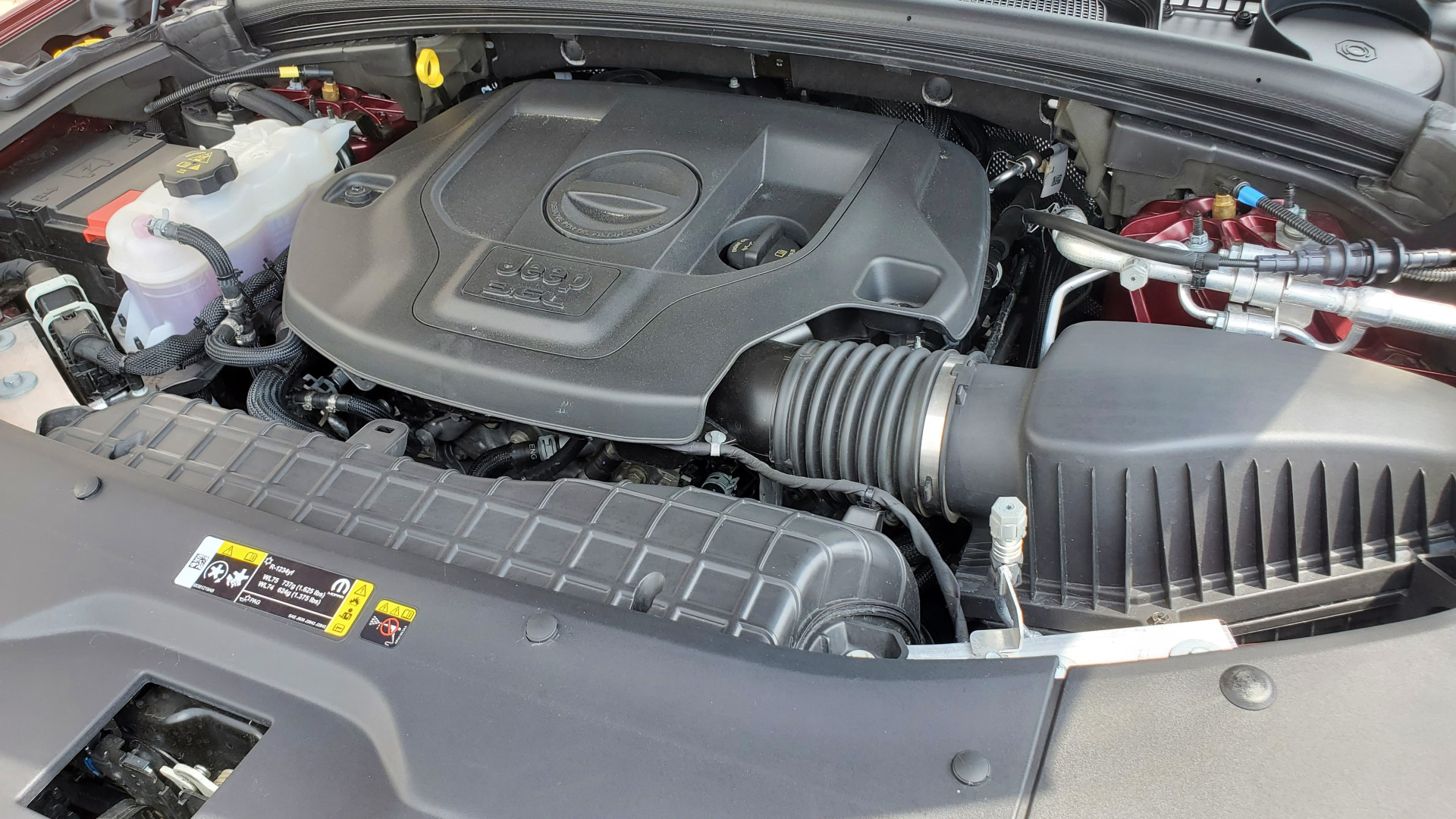 As mentioned, the big news with the L, apart from styling and content updates, is its size difference. And it is considerably larger than the outgoing model. A platform change has taken place here, with the L and the forthcoming new two-door models moving from an architecture shared with the Dodge Durango and related to the old Mercedes-Benz W166 M-Class, to an all-new WL chassis with new front and rear independent suspension.

My tester was outfitted with second row bucket seats, but a bench for that row is available. Those second-row buckets were the ‘tip and slide’ variety, which made the climb into the third row easy. The seating back there isn’t the most spacious, but it’s better than a lot of third rows I’ve sat in. I’m not sure how long I’d want to be back there, but on short-haul trips I think it would be fine, and Jeep designers have at least provided USB charge ports and cupholders which are nice touches. 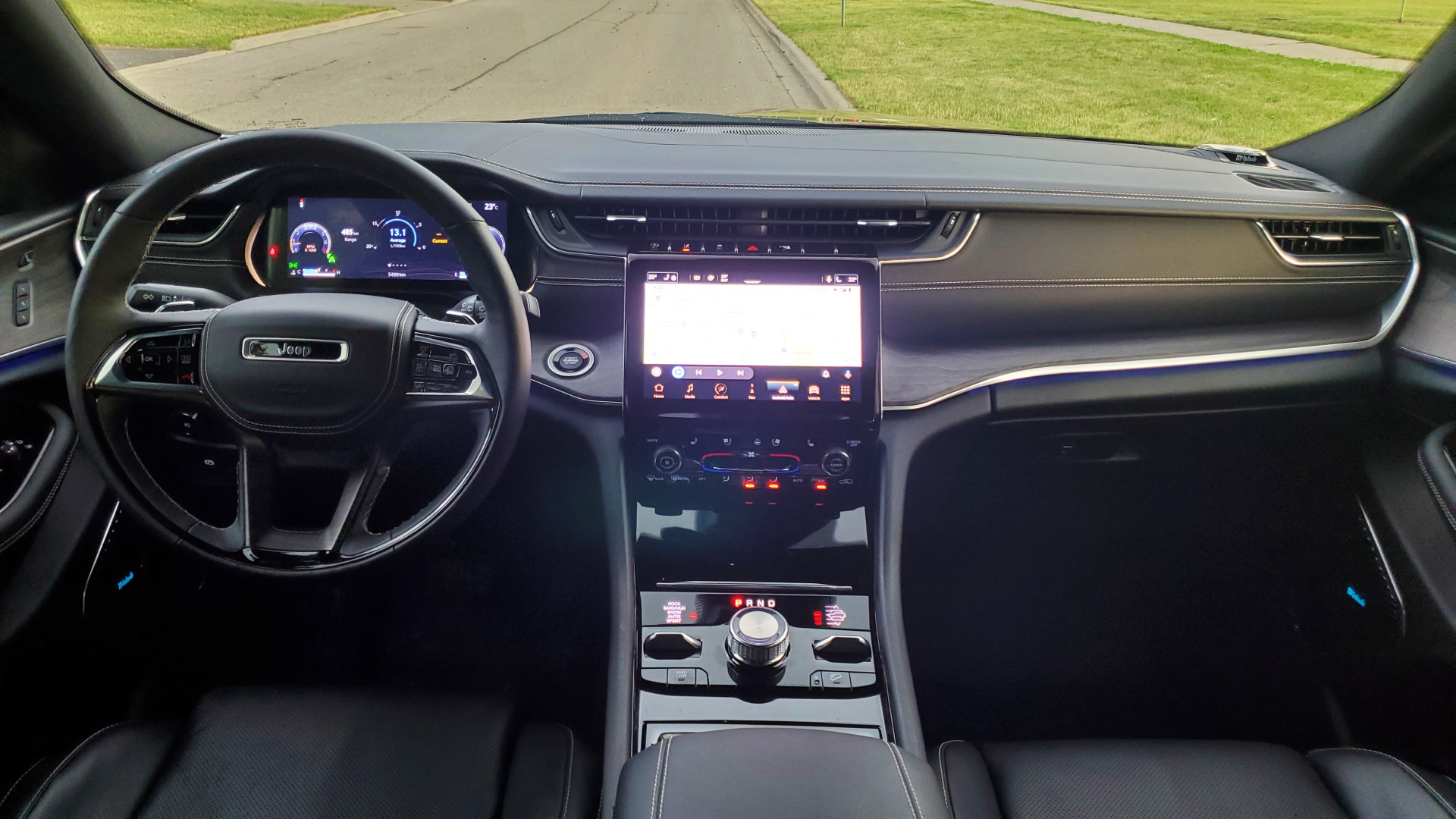 I’ll get to the rest of the cabin shortly, but I’ll touch on the exterior first. The outgoing fourth-gen Grand Cherokee had been in service since 2011 and its age was really starting to show. The last fourth gen I drove was a Trackhawk shortly before the pandemic hit in the winter of 2020, and as much as I love its fire breathing supercharged V8 powertrain, the aesthetic feels quite dated, especially on the inside.

Perhaps the bar was set a bit low, but the new L appears quite handsome to these eyes. Bigger, boxier and more angular, but also more sophisticated. The slimmer LED lighting, updated seven-slot grille and a more upright stance with thinner pillars, give it a sharper, somewhat leaner look.

Where the refinement really shows up, however, is in the cabin, which feels light years ahead of where the fourth gen left off, from design and materials to execution. It’s easily the most impressive aspect of the L, for me. I realize my tester is an upper-level Overland, which checks in at roughly $80,000 before taxes thanks to a several option packages. But even if one opts for the entry-level Laredo, it still benefits from the same advances in design and content.

I won’t run through them all, but I’ll mention a few things that struck me. First off, general comfort, outward visibility and driving position are first-rate. As for design and content, I’m a big fan of the L’s reimagined dash and centre stack. The optional 10.1-inch multimedia display, which comes bundled with embedded Uconnect 5 navigation ($2,195), not only offers stunning graphics and quick response times, but it’s also loaded with deep levels of connectivity and customization features. The standard display is an 8.4-inch unit, but I’d consider this one if you want the best of what Uconnect 5 has to offer.

The other digital display, the 10.25-inch frameless instrument cluster is also quite engaging, with pin-sharp graphics and a high-degree of customization on offer, not to mention a rich colour palette. Unlike the 10.1-inch, however, this screen is standard issue across the L range. 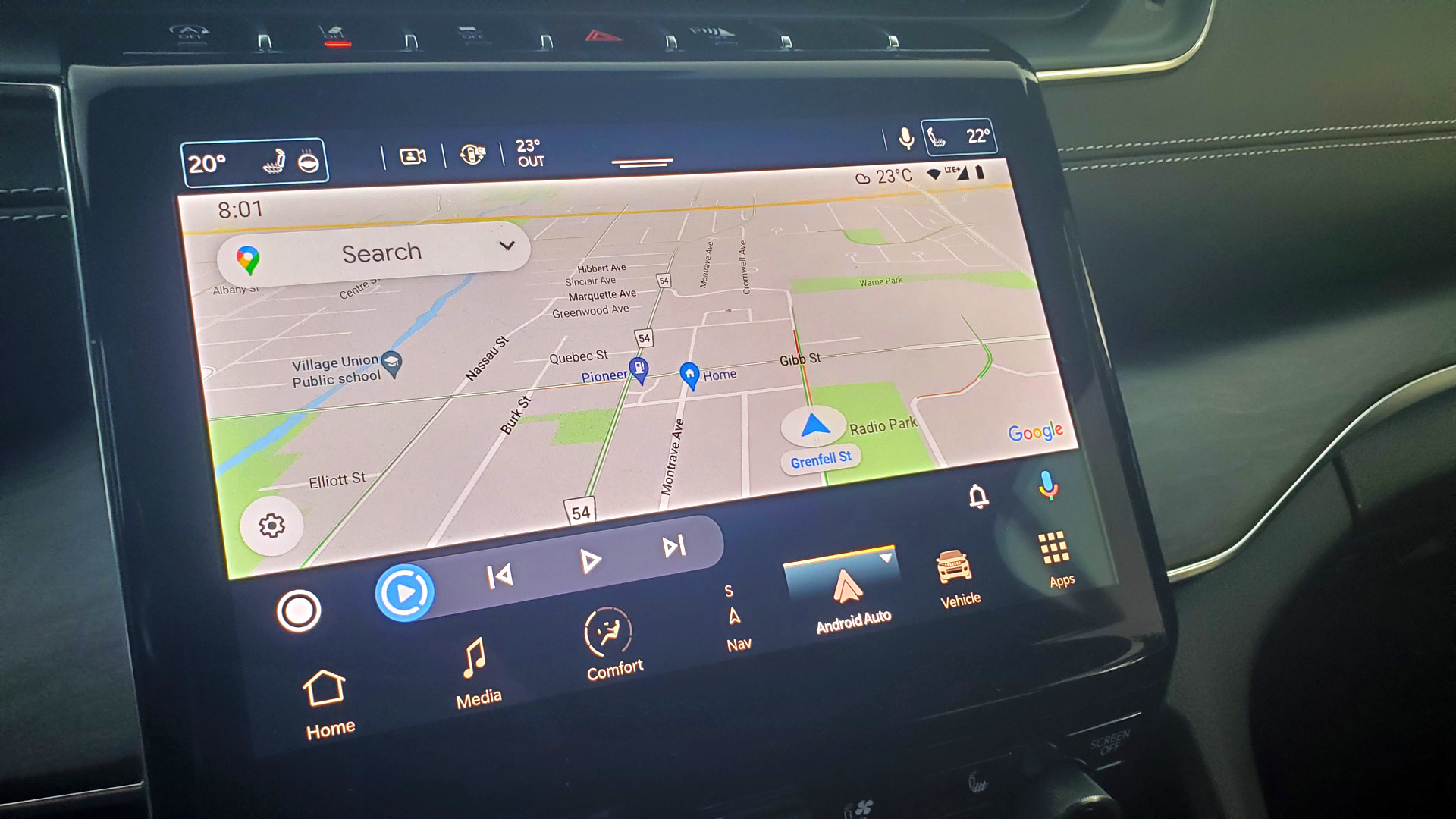 Lastly, I think the interior materials used, which include tasteful piano black plastics, simulated wood accents and satin metallic trims look good and are pleasing to interact with. The centre console will likely need some regular wiping down, however, given the large surface area covered in piano black plastic trim.

For driving impressions, I’ll start with on-road. Despite my tester being a pre-production unit, I thought its ride to be quite comfortable, compliant, and responsive (for a three-row SUV) on public roads, both at highway speeds and below. Tire and wind noise are reasonably hushed, and could be even quieter, if you skip the off-road package ($1,095) and the noisier on/off-road tires my tester is equipped with.

As for the 3.6-litre Pentastar V6, it provides good linear acceleration off the line and at speed and feels responsive enough for the everyday driving situations most buyers will be using it for. Sport mode sharpens throttle response and bumps engine revs, but it doesn’t alter the driving character all that much.

The off-road portion of the drive took me to a network of sandy, muddy, rocky and rough road trails that provided a good workout for my tester’s Quadra-Trac II 4×4 system and Quadra-Lift Air Suspension with Adaptive Damping. Ground clearance can extend to 10.9 inches (277 mm), with maximum water fording of 24 inches (610 mm). If only I had encountered such challenges on course, but sadly I did not. A few mud puddles in shaded areas were no match for the L, but I drove through them anyway.

The Selec-Terrain traction management system offers five drive modes (auto, sport, rock, snow, mud/sand), and I made use of rock and mud/sand frequently while climbing over changing terrain. Jeeps are world-renowned for their off-roading capability and the L honours the legacy. Its systems, combined with the off-road package, which adds skid plating for the fuel tank, transfer case and front suspension, along with an electronic limited-slip differential, makes hustling over wash-boarded and rocky trails a drama-free experience. 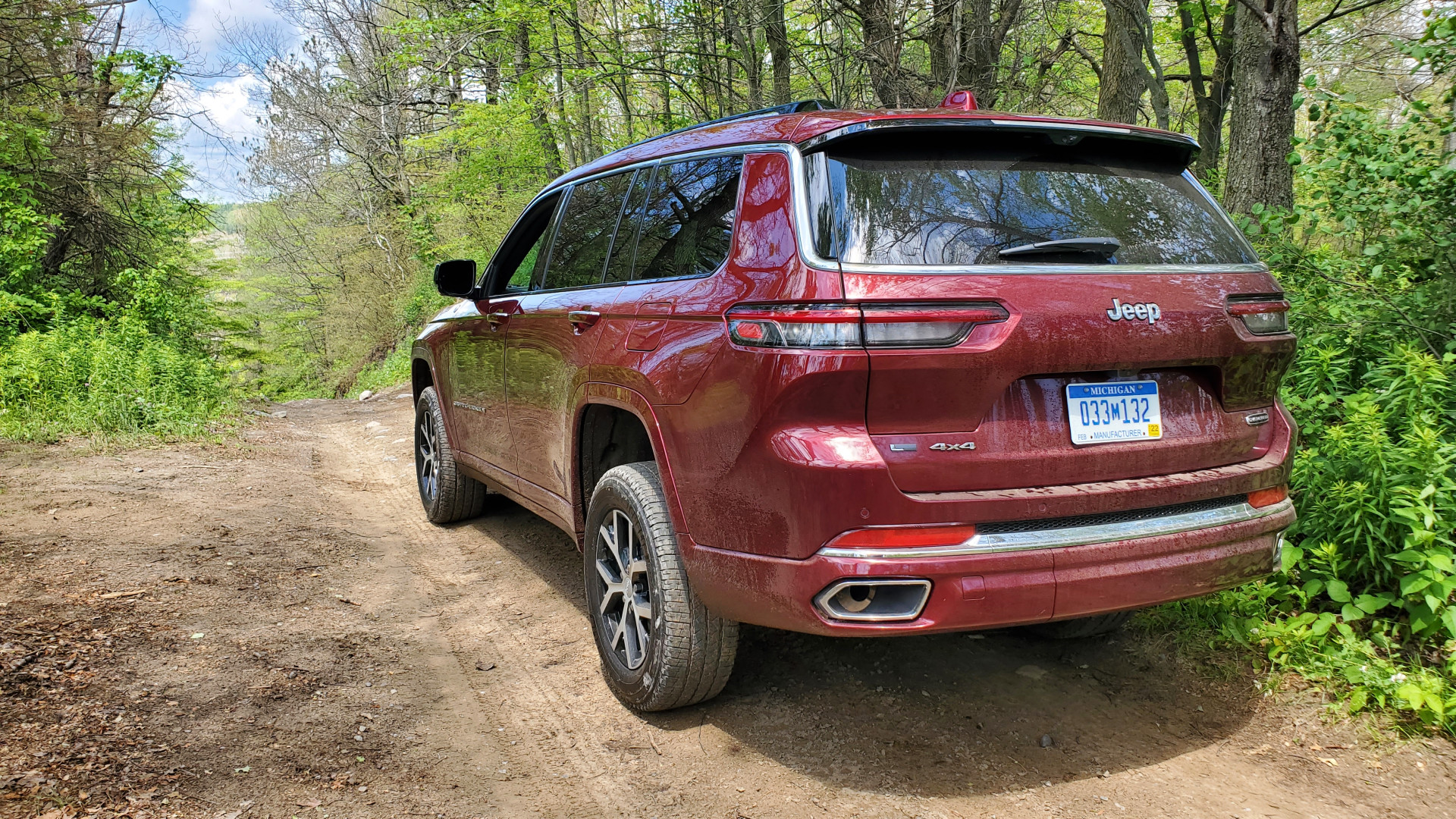 A rocky uphill ascent required the use of 4-low with rock setting engaged, but with those systems engaged and extra ground clearance from the air suspension, the climb was mostly uneventful. Even coming down was easier than I was expecting. I used the hill descent control for part of it, but turned it off, as rock and 4-low were all that was required.

In sum, the Grand Cherokee L is an impressive vehicle, and there’s much more to discover than what I’ve described here, but I can only say so much before my editor wants me to wrap it up.

But yes, there are other noteworthy advances worth noting, such as the optional McIntosh 19-speaker premium audio system, the only one of its kind in the industry. Or the available ambient lighting system, which is available in five colours. Or the V6’s maximum tow rating, which is rated at 6,200 pounds (2,812 kg.) and is class leading. I could go on, but I won’t.

But all these aspects should make an already top-selling vehicle even more popular, especially once the two-door and electrified models arrive in the coming months. 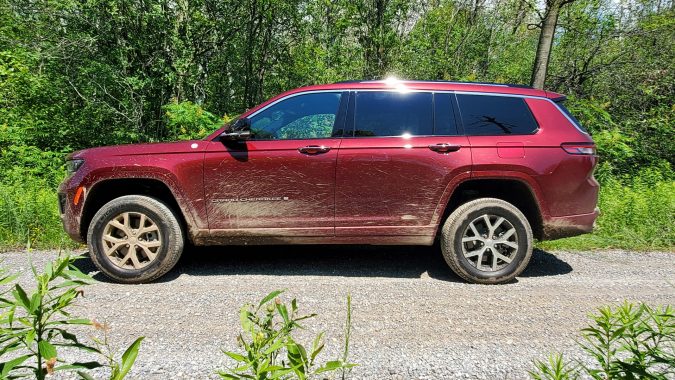 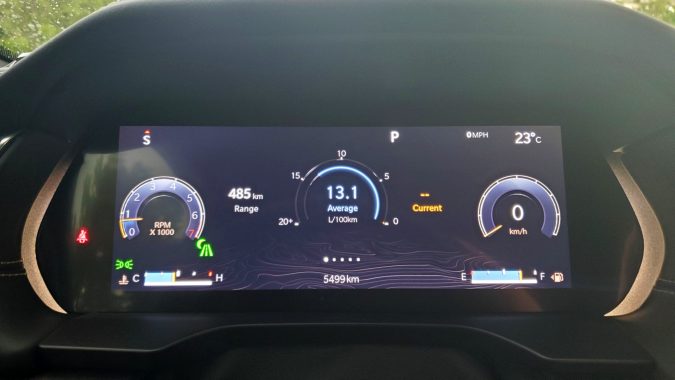 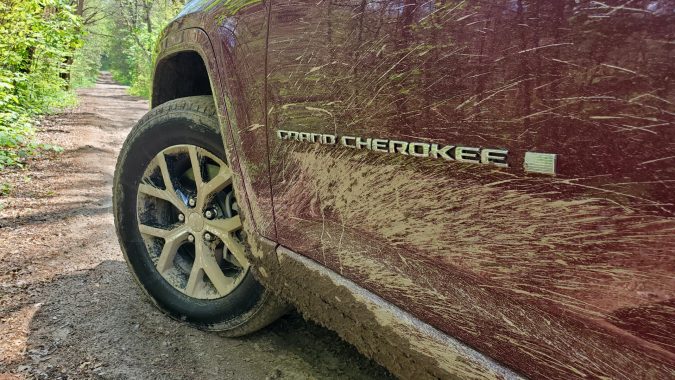