It’s only been five years since Genesis separated from mother company Hyundai to become a standalone luxury brand. In that short time, they’ve managed to produce a trio of very nice cars; the G70, G80, and G90.

But it’s the arrival of their first premium crossover, the GV80, which finally establishes Genesis as a contender in this lofty niche.

Though well received the Korean company’s first offerings were only moderately successful, and didn’t quite elevate the brand to the level of its more established competitors. When most automakers were abandoning the passenger car market for the more lucrative crossover, it was an unfortunate time to debut a trio of luxury sedans.

If Genesis was going to compete against the heavy hitters, it was vital that it develop a first-rate crossover – a tall order for a company that hadn’t built one before. Granted, Genesis isn’t just a small startup, it has parent company Hyundai’s considerable resources to pull from. The Korean juggernaut has an impressive record for producing popular mass-market crossovers. But lest you think the new GV80 is merely a rebadged Hyundai – it shares nothing with its humble cousins and rides on an entirely different platform.

While Hyundai’s crossovers are all front-wheel drive based, the GV80 is underpinned by the company’s first unibody, rear-wheel-drive platform. And by all measures, the new crossover feels like Genesis’s actual starting point– the sedans were just testing the waters.

This is no humble new beginning – the GV80 bursts forth with pomp and swagger. Instead of gracefully joining the ranks, it rolls in with a side eye from its twin-slit headlights. The massive chain-link shield grille stops just short of garish, and the two parallel lines established by the headlights are repeated in the gills flanking its front shoulders. A strong parabolic character line breaks up the side sheet metal, and the effect is visually slenderizing. The look will henceforth carry through the rest of their lineup and become Genesis’s signature design language. In profile, the GV80 slightly resembles the Bentley Bentayga, which stands to reason since Genesis lead designer, Luc Donckerwolke was poached from the venerable British brand.

If the exterior design announces the GV80’s arrival in the premium crossover segment with considerable presence, the cabin confirms that it belongs. Beautifully executed, it’s available in a striking palette to contrast or compliment the exterior paint scheme. While the design is on the conservative side, the level of craftsmanship is evident in the beautifully quilted leather, and exquisite matte wood trims. Attention to detail matters in this segment, and it is the little things that stand out: the beautifully knurled dials, filagreed aluminum speaker covers, and richly padded leather dash and door panels in top-spec Prestige models. It’s a tasteful environment without any overt embellishment. 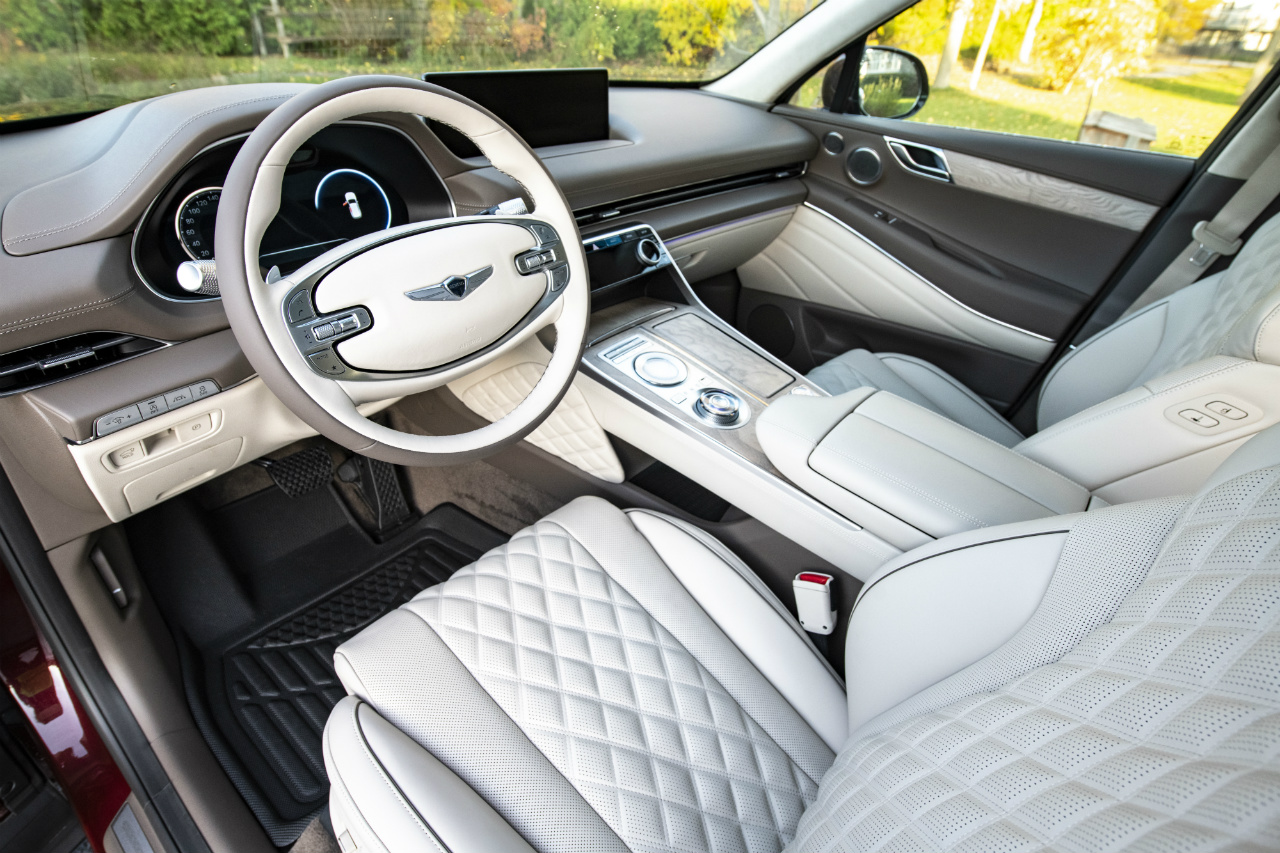 A floating console that houses the interface controller and rotary dial gear selector bisects the cockpit. The standout interior tech feature is the 14.5-inch raised touchscreen that’s standard across the lineup. It’s an awkward reach from driver to screen – better to use the iPod-like touchpad that features click, pinch, and swipe functions as well as handwriting recognition.

Available on upper trims is a trick new 3D gauge screen, active noise cancellation using the 21-speaker premium audio system, and an electronically controlled adaptive suspension with road preview. One quibble I had with the technology was the aggressiveness of the lane-centering function – which felt like we were ping-ponging off the lane markers until the vehicle settled in the middle.

Seats are plush and comforting with 12- or 16-way adjustment and massage up front, and heat and ventilation for front and second rows. There’s an available third row option, but like most of these, it’s awkward and cramped and probably best left off your checklist.

Genesis has wisely loaded up the GV80 right out of the box with plenty of standard safety and infotainment technology. In addition to the usual suite of driver’s assistance programs, there’s a head-up display that detects vehicles in the next lane, and automated lane change. The adaptive cruise control system eventually “learns” to adapt to your driving style, and can adjust following gaps and reaction speed. Optional is a remote parallel and perpendicular park function via smartphone app.

The Magna-derived all-wheel drive is standard in Canada – and exclusive to our market is a Terrain Mode that uses the electronically controlled limited slip differential to distribute power between the rear wheels.

Our time was divided equally between the mid-range 2.5T Advanced, and top of the line 3.5T Prestige. While the 2.5T is a well-sorted vehicle that produces a respectable 300 horsepower and 311 lb-ft of torque via a turbo-charged four-cylinder, it’s the 3.5-litre turbo V6 that captured not only our attention, but according to Genesis, that of early buyers. A fully loaded AWD V6 G80 weighs in at a considerable 5,000 lbs, but with 375 hp/391 lb-ft of torque, it hits 100 km/h in 5.7 seconds. And it does so with the linear, creamy smooth delivery expected of a premium vehicle.  Aside from its more powerful drivetrain, the V6-equipped G80’s adaptive suspension system is vastly superior to the steel setup of the 2.5T models.

Over smooth highway and pockmarked rural roads, the GV80 proved itself a beautifully composed vehicle that let nothing disturb the quiet sanctity of its cabin–despite riding on 22-inch rollers wrapped in winter rubber. Steering is well weighted, and there’s little body roll when cornering. Although the 8-speed transmission features row-your-own paddle shifters and a sports mode, the GV80 is no Mercedes-AMG performance rival. While powerful enough, the engines go about their business quietly without producing any throaty burble or exhaust note. With its supple ride quality and the silent serenity of its interior, the GV80 is a more luxurious cruiser than sporty poseur.

Genesis may have been slow to get off the ground, but with the arrival of the GV80, it finally earns its place among the premium luxury brands.