The 3.5 litre V6 engine has been mated to an electric motor.

When car companies introduce new models, it’s always “ALL-NEW!! BEST EVER!!” When Ford launched the 13th generation F-Series pickup in 2015, seldom has the PR hype been more justified. It might have been one of the most audacious debuts in automotive history. A pickup truck with an all-aluminum body?

Sure, aluminum had been used in low-volume, high-end vehicles before, where its light weight could add performance and its high cost could be absorbed by a high price. But in one of the most popular vehicles in the world, and one that is regularly exposed to the rough-and-tumble life of work trucks; and few body shops being equipped to repair this metal?

But the weight savings aluminum offered had the allure of reduced fuel costs for such a large vehicle.

So Ford bit the billet (la ittle metal-working joke there…) and the F-Series continues to roll along as the best-selling vehicle in Canada and the U.S., going on decades now.

Well, with the 14th-gen 2021 F-Series, Ford says that 92 per cent of the new truck’s parts have been redesigned, with only the cabs and pickup boxes are being carried over from the earlier versions. In other words, the parts you see and come in contact with.

Even “redesigned” doesn’t necessarily mean “all-new” – a tweak or two technically makes it a different part. Actually, the most interesting bits of the 2021 F-Series have nothing to do with the body.

I had the opportunity to spend a few hours in a 2021 F-Series Hybrid. Yes, you read that correctly – a hybrid. This fuel-saving technology is now offered in F-Series. The 3.5 litre V6 engine has been mated to an electric motor. I only had the truck for a few hours, so I only can tell you a bit about how the hybrid powertrain works in a combination of city and highway driving.

The hybrid is available only in the SuperCrew four-door full five-seat body style, from the Lariat trim on up.

Like all hybrids, the F-Series will switch to electric mode on a flat road at speeds as high (in my brief test) as 80 km/h.

The instrumentation shows you how many km you’ve gone, and how much of that was on battery power. At one point, my truck showed a cumulative 146.6 km total, 37.4 of which were electric.

It might be interesting if it also showed you how many electro-klicks you have left. If my tester did in fact keep track of that, I never found out how to display it.

There are also displays which show you where the power is coming from – the engine, the motor, or both. Fun to watch for a while, but you’ll probably soon stop looking at that.

Mostly, the transitions between engine power and electric power are seamless. But when you stop at a light, the engine stop-start shuts it off; when you then depress the accelerator to get going again, it often starts with an unpleasant jerk.

No no, I’m not talking about your passenger; I mean the engine…

Can this save enough fuel to pay for itself?

As always, it depends on where and how you drive. A friend of mine who works for a Ford dealership says their sales people ask prospects who inquire about hybrids what kind of driving they do. If it’s mostly highway, they steer them away from hybrids because they aren’t likely to make up the cost in fuel savings.

But the NRCan annual fuel costs calculation suggests you’ll save $550 a year, so it will take almost nine years for the hybrid to make up for that $4,800 hit.

Of course, the electrification also provides on-board power of up to 7.2 kilowatts, to operate power tools, lamps, whatever the job (or the camp site) requires.

The other big change in the 2021 F-Series is the console-mounted shift lever. With the shift lever in Park, you can depress a chrome button ahead of the quadrant and the lever glides forward and disappears into the console. 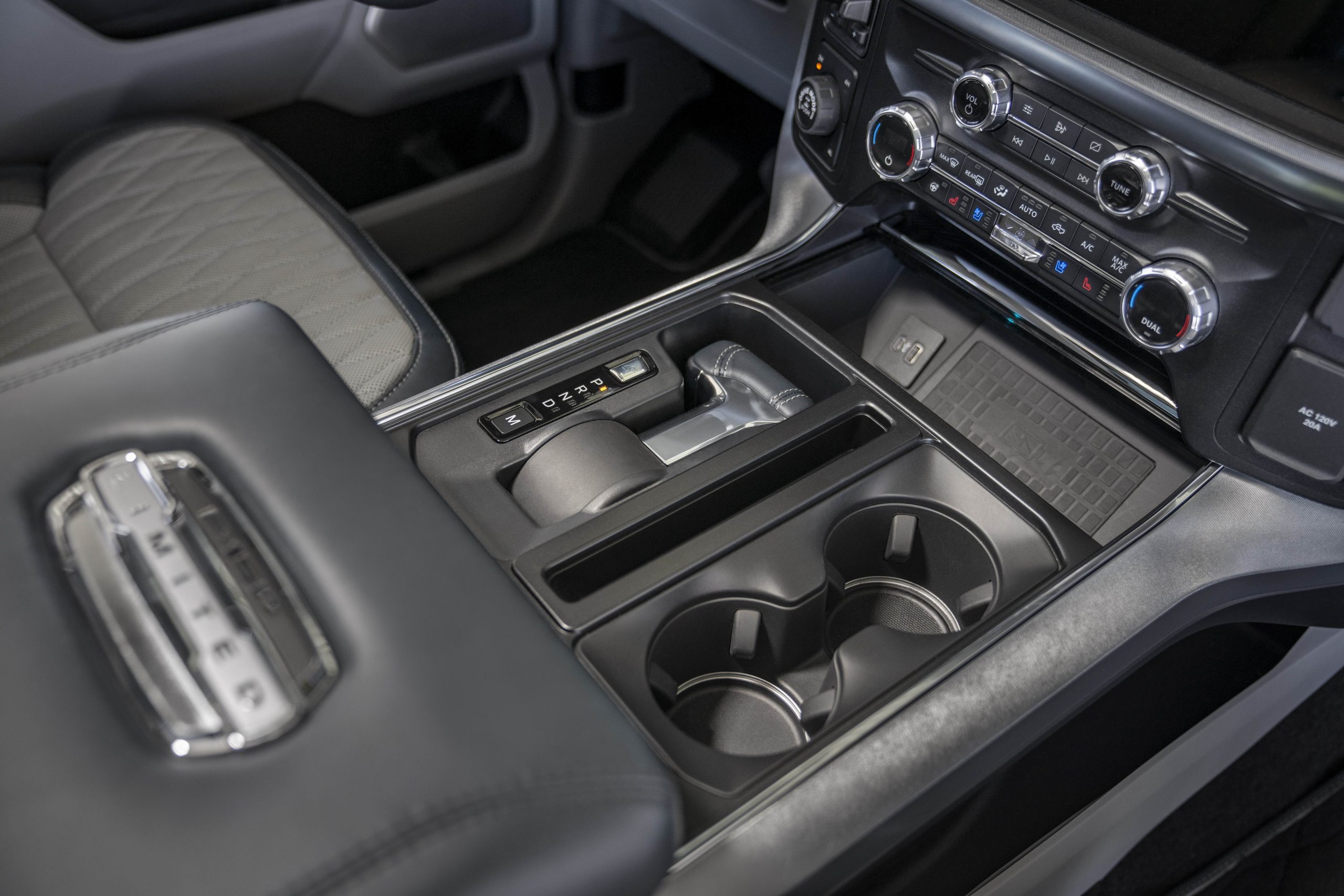 You can then open the huge central cubby bin and fold its hinged lid forward to create a large flat table/desktop you can use as you please. Handy.

Still, this seems like a million-dollar solution to a ten-dollar problem; if they just put shifter buttons on the dash like Lincoln or their buddies at GM do on some of their models, they wouldn’t need the disappearing shifter.

But Ford’s market research says their customers like a shift lever, and the customer is always right even when he’s wrong.

The other oddity in the new F-Series is the weird tachometer. It’s a fairly normal-looking modern digital gauge with a circular sweep, and in the middle of the dial it replicates this information in a digital display.

And those digits are by far the largest font size in the entire dashboard. Does anybody really need to know the r.p.m. that badly? More so even than the speed?

As noted, the F-Series has a long and glorious history. Ford effectively is a truck company, and they seem to know what their customers want.

They aren’t making any predictions as to how many people will opt for the hybrid powertrain. There are plenty of others. There’s also a fully electric model coming down the road.

When it comes to pickup trucks, if you want it, Ford can probably offer it to you.