ARIZONA – Automakers in Detroit often behave like three siblings who just simply cannot stand to be outdone by the other. Choruses of “Anything you can do I can do better” are drowned out only by cries of “Everything you say plus one!” Nowhere is this more evident than in the heavy-duty truck segment.

Not content to sit still and watch their crosstown rivals preen with top-of-class torque and towing numbers, the engineers at Ford sharpened their pencils and came up with a raft of updates for the 2020 Super Duty line. Wearing slightly new styling and offering a revised powertrain lineup, the big Blue Oval brute is bent on taking a few toys back to its side of the yard.

Though there are three engines available in the 2020 Ford Super Duty, we’ll focus on the two that are either all-new or significantly revised for this year. First up is the 6.7L V8 Power Stroke diesel, which makes 475 horsepower and a mind boggling 1050 lb-ft of torque. Yes, you read that correctly. Ford engineers enjoyed referring to such grunt as ‘kilotorque’, which may be one of your author’s new favourite words.

It’ll not escape your notice that Ford has now outstripped Ram in the peak diesel torque department, the latter’s Cummins capable of eking out a trifling 1000lb.-ft of twist. Ford engineers allowed us to draw our own conclusions to the fact that all Power Stroke diesels are rated at the new sky-high figure, whether it is installed in an F-250 or F-350. At Ram, only so-called High Output versions of the Cummins, installed in 3500-series pickups only, earn the four figure badge. Shop carefully, folks. 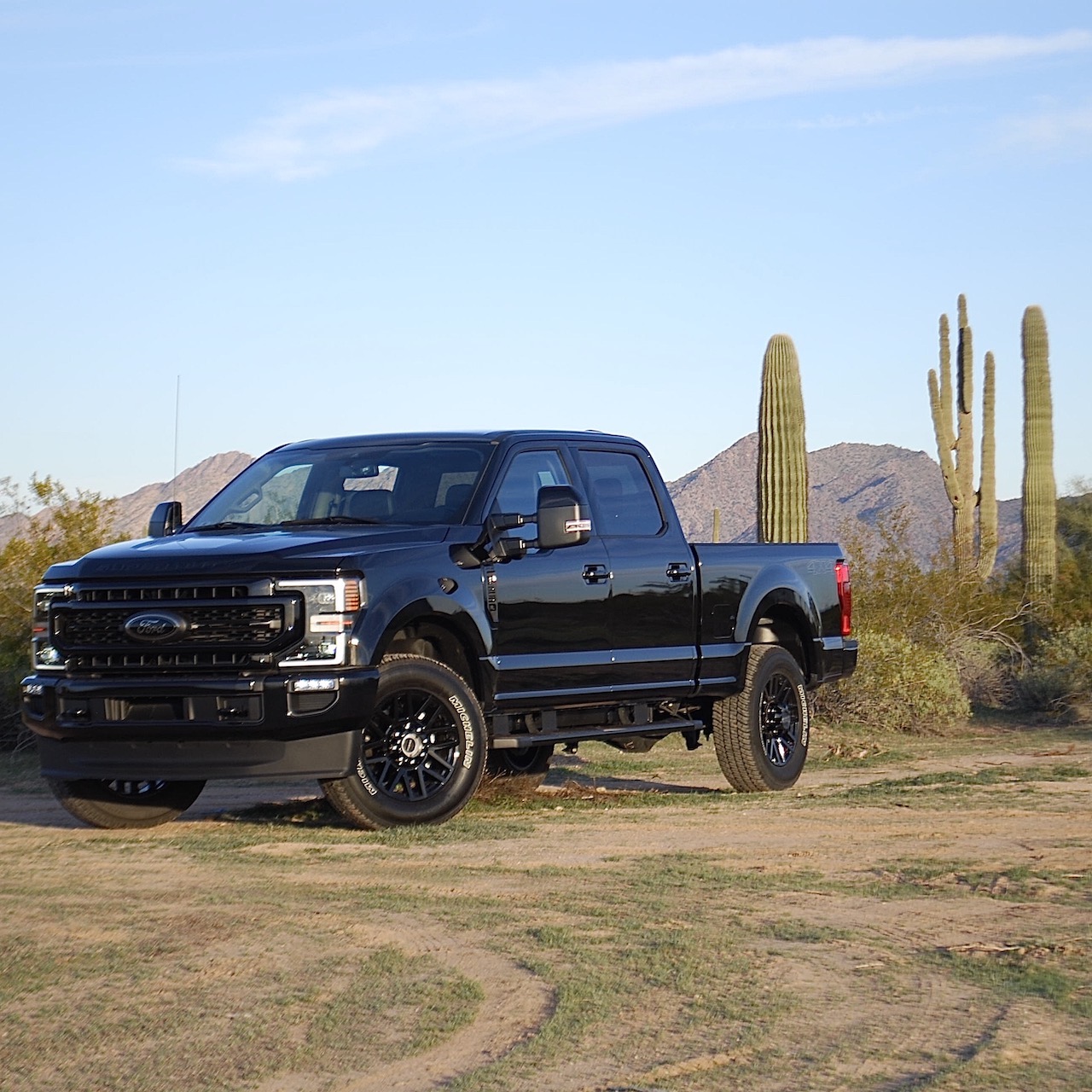 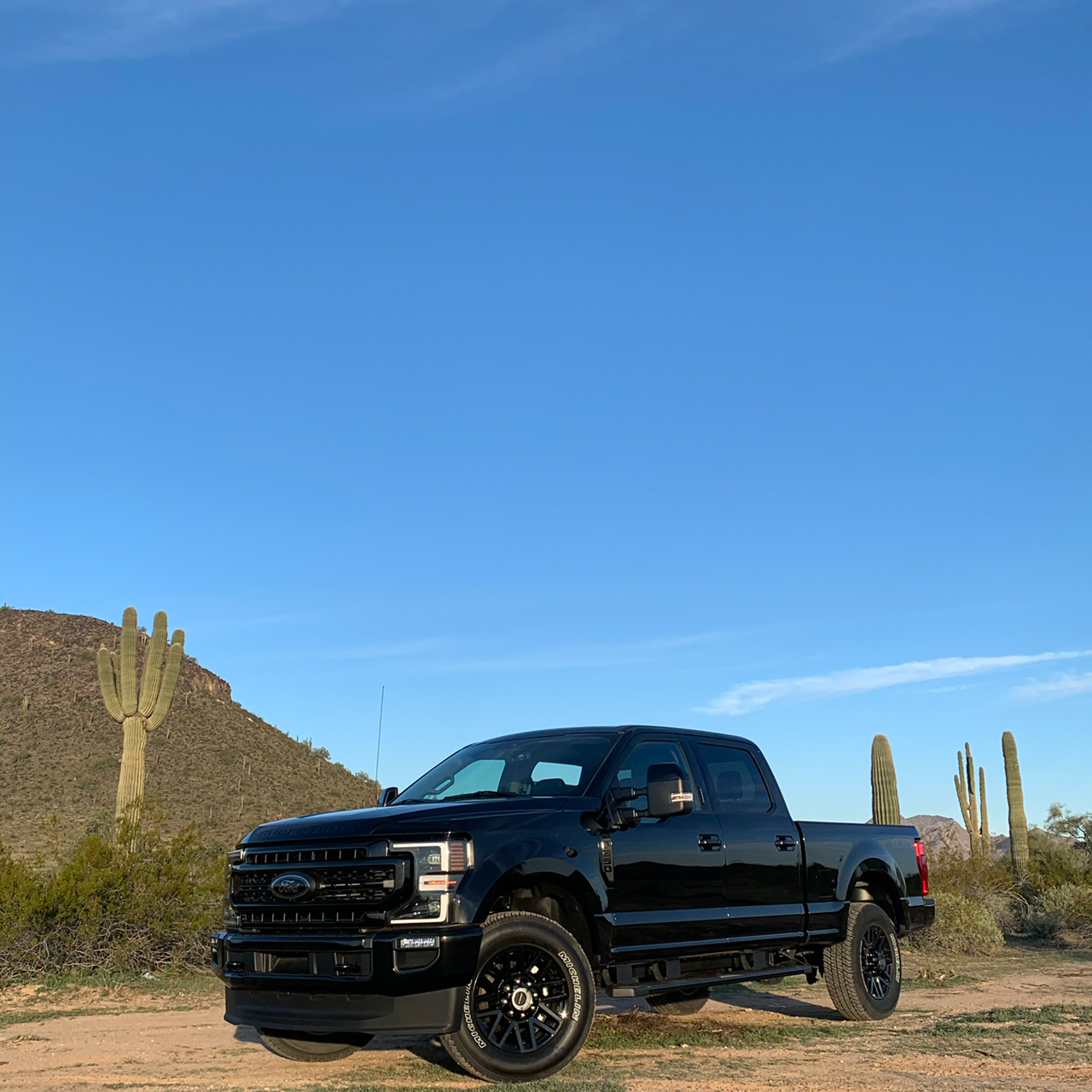 A single turbo charger the size of a head of lettuce permits the diesel’s wave of torque to start erupting just off idle. All 1050lb.-ft of the stuff is online by 1600rpm. As the tach sweeps past 2000rpm under full throttle, the Power Stroke is pulling like that runaway train in Back to The Future III. One can imagine Christopher Lloyd underneath the Super Duty’s grand piano sized hood, furiously stoking the fires with coloured logs. The fun is shut down by a 4000rpm redline.

Here’s a better idea: upshift a gear and start the whole process again. You’ll have plenty of opportunity to do so, given there are ten cogs in the Super Duty’s transmission. The ‘box mostly does a good job of making sure the Power Stroke’s fires are always on boil but it is possible to catch it flat-footed when the truck is unladen and loafing along in tenth gear at highway speeds on cruise control. A quick stab of throttle to dispatch a left-lane lounger can result in a ‘one-one thousand’ hesitation before the transmission realizes you mean business. It’s worth noting here that under cruising conditions the Power Stroke is remarkably quiet, as if it is idling far away under a heavy blanket.

In contrast, the new 7.3L V8 gasser roars like a NASCAR stocker when provoked and bellows like Chewbacca on a bad fur day. Displacing 445 cubes, its valvetrain description will sound familiar to anyone who’s worked on engines in the last, say, sixty years: pushrods, rocker arms, and two valves per cylinder. It’s good for 430 horsepower and 475lb.-ft of torque. Whether it’s working flat out towing a 7500lb overlanding camper across the desert hills of Arizona or tearing through an off-road course, the naturally aspirated V8 doesn’t need to wait for a turbo to spool and responds instantly with just the flex of the big toe on your right foot. 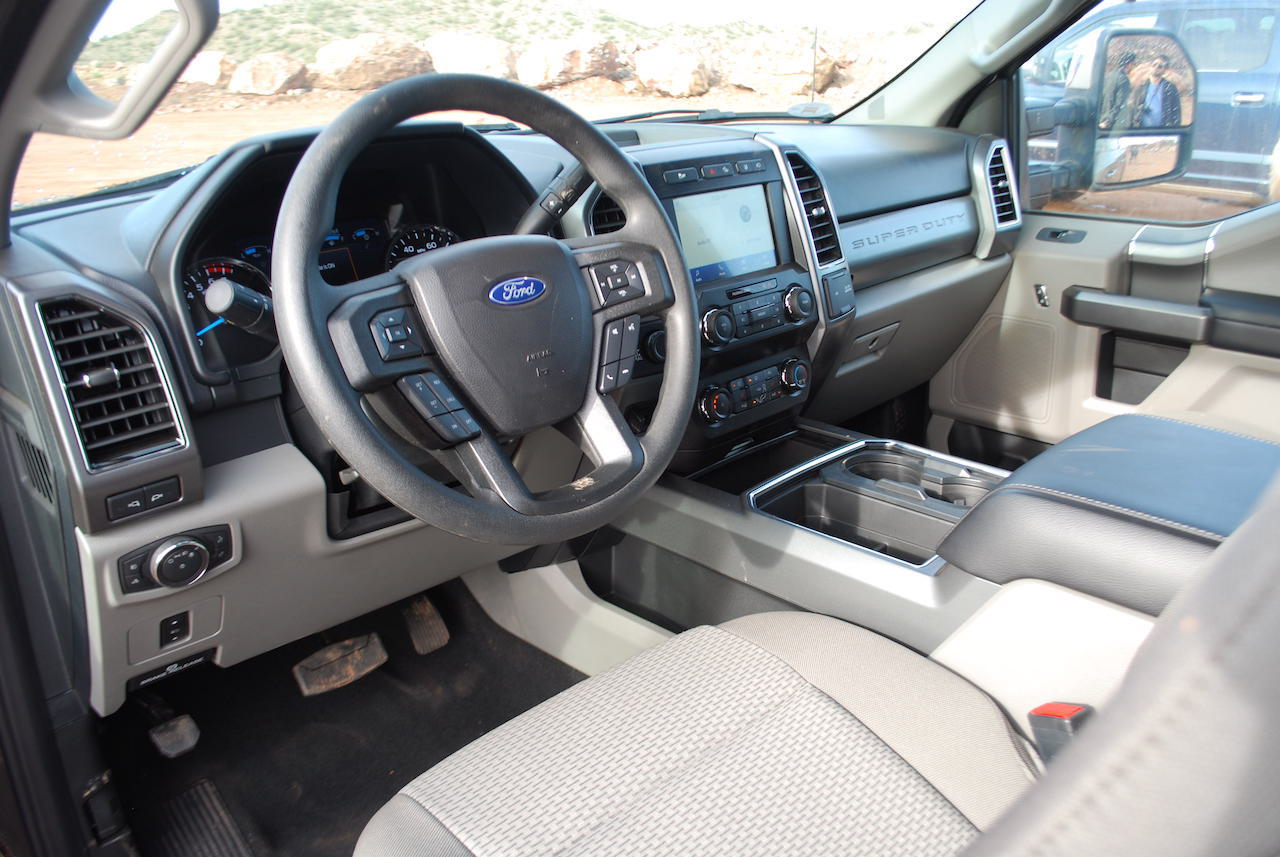 Given the choice, it’s the one I’d select. Why? Cost, engine flexibility, sound, and cost.

Did I mention cost? The 7.3L is a $2750 proposition on XL and XLT trims of the F-250 but is standard kit on Lariat, King Ranch, and Platinum trucks. The Power Stroke diesel, on the other hand, is an eye-watering $10,575 option on all F-250 trims save the top-rung Limited, where it is standard and the only engine available. It’s a tremendous diesel, and any truck owner would be proud to brag at the campground about their 1050lb.-ft of torque, but unless one absolutely needs that towing capacity, running the numbers is apropos.

Let’s start by assuming the average price of regular unleaded in Canada is $1.15/L and diesel is 10c/L more. In our testing in the Arizona desert, we saw an indicated 13.6L/100km fuel economy from the Power Stroke over a 65-mile drive combining back roads and highway cruising. The 7.3L gasser showed us 19.3L/100km over the same route. If one were to drive 20,000km per year, they would spend about $3400 in diesel or $4440 in gasoline. A $1000 smaller expenditure in fuel per year puts the breakeven point on the diesel at ten years or just under eight years on trucks where the engine is not standard equipment.

My lone complaint about the 7.3L V8? There is no exterior badging identifying the monster motor that lies under the hood. This is fine for the wallflowers in our audience but leaves something wanting for the rest of us. The 6.7L Power Stroke gets its own door side billboard, after all; the 7.3L gasser is more than good enough to earn one, too. 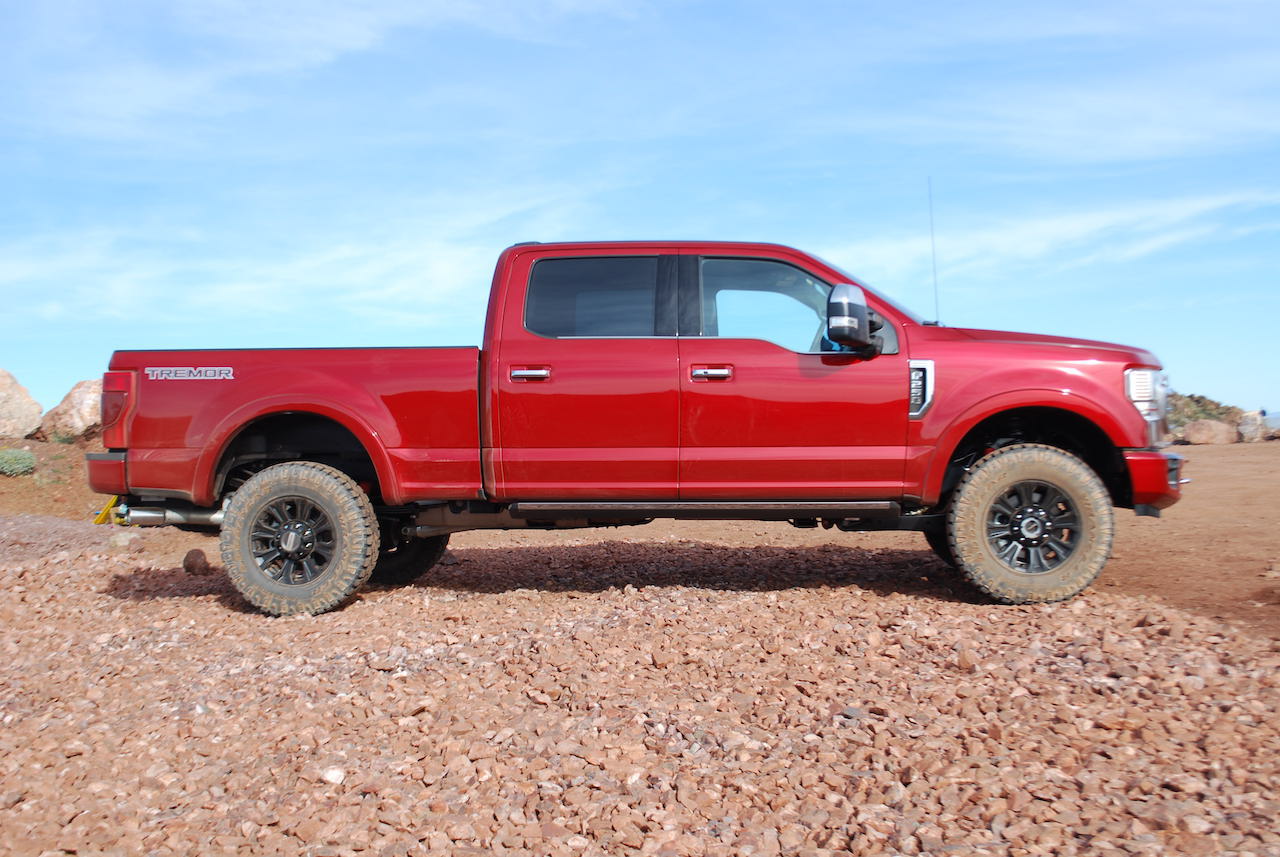 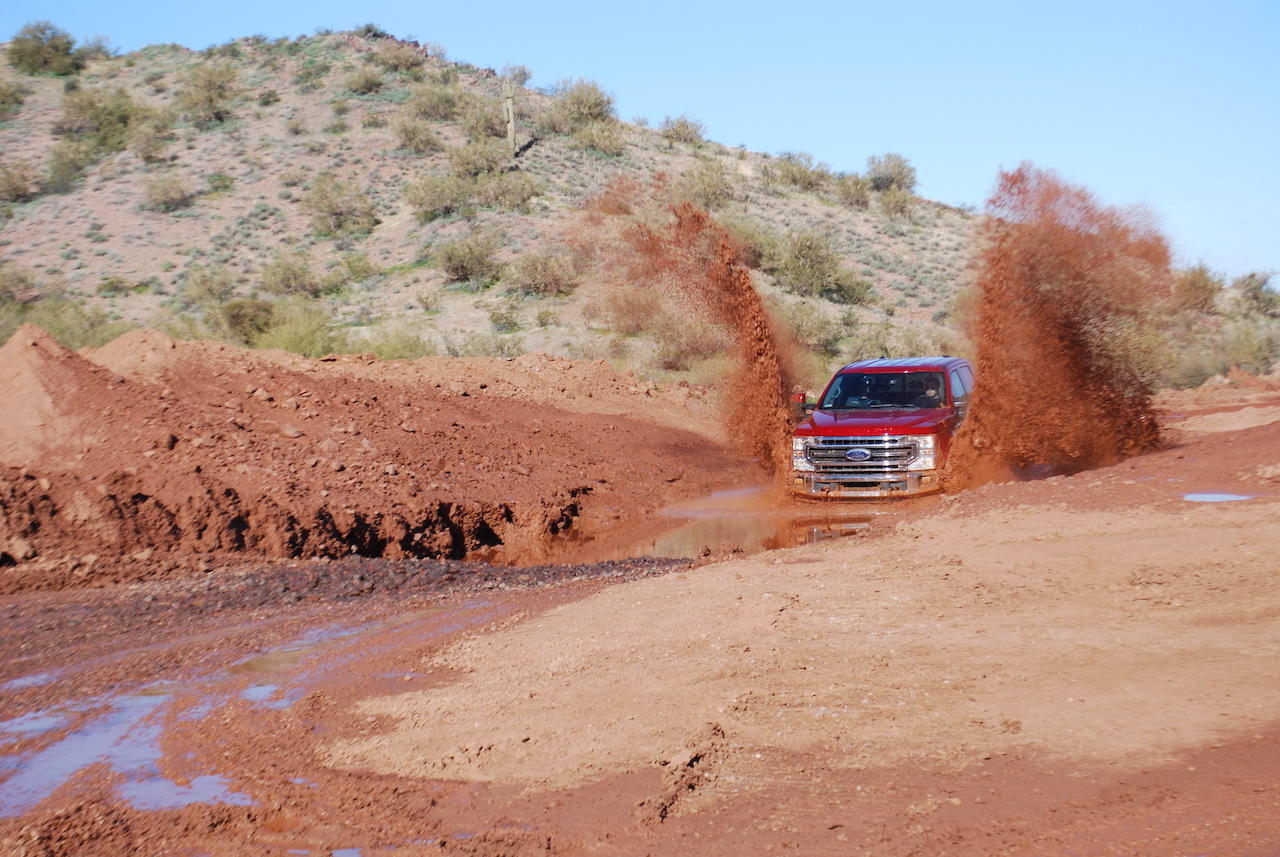 Inside the 2020 Super Duty one will find a cabin that is immediately familiar to, well, anyone who’s been in a Ford pickup lately. A speedometer and tach duo the size of dinner plates face the driver, with a handy digital screen between them serving up all kinds of configurable data. For this new model year, a wireless charger joins the party on snazzy trim levels while safety nannies like lane-keeping and automatic emergency braking is standard on every truck except the base XL. Some trims are so laden with wood and brown leather that the centre console begins to take on a catafalque appearance, while others are more tastefully lined with aluminium-like finishes and black leather.

It would do the team at Ford a world of good to endow Super Duty with the infotainment screen found in the new Explorer, as the current unit looks small and outdated compared to offerings from other truck manufacturers. Some interior materials could also benefit from an upgrade, such as the plasticky door pulls and a 4WD selector that looks and feels as if it were ripped straight from a Little Tikes Cozy Coupe.

We also sampled the new-for-2020 Tremor off-road package, a suite of kit that can be applied to just about any trim in the Super Duty line and with a diesel or gas engine. Costing about $5000, it includes gritty features like 35-inch Goodyear Wrangler Duratrac rubber on 18-inch wheels, a 2-inch front end lift, and a revised front fascia to improve its angle of attack. An optional integrated winch is also available for the heady sum of approximately $3700. 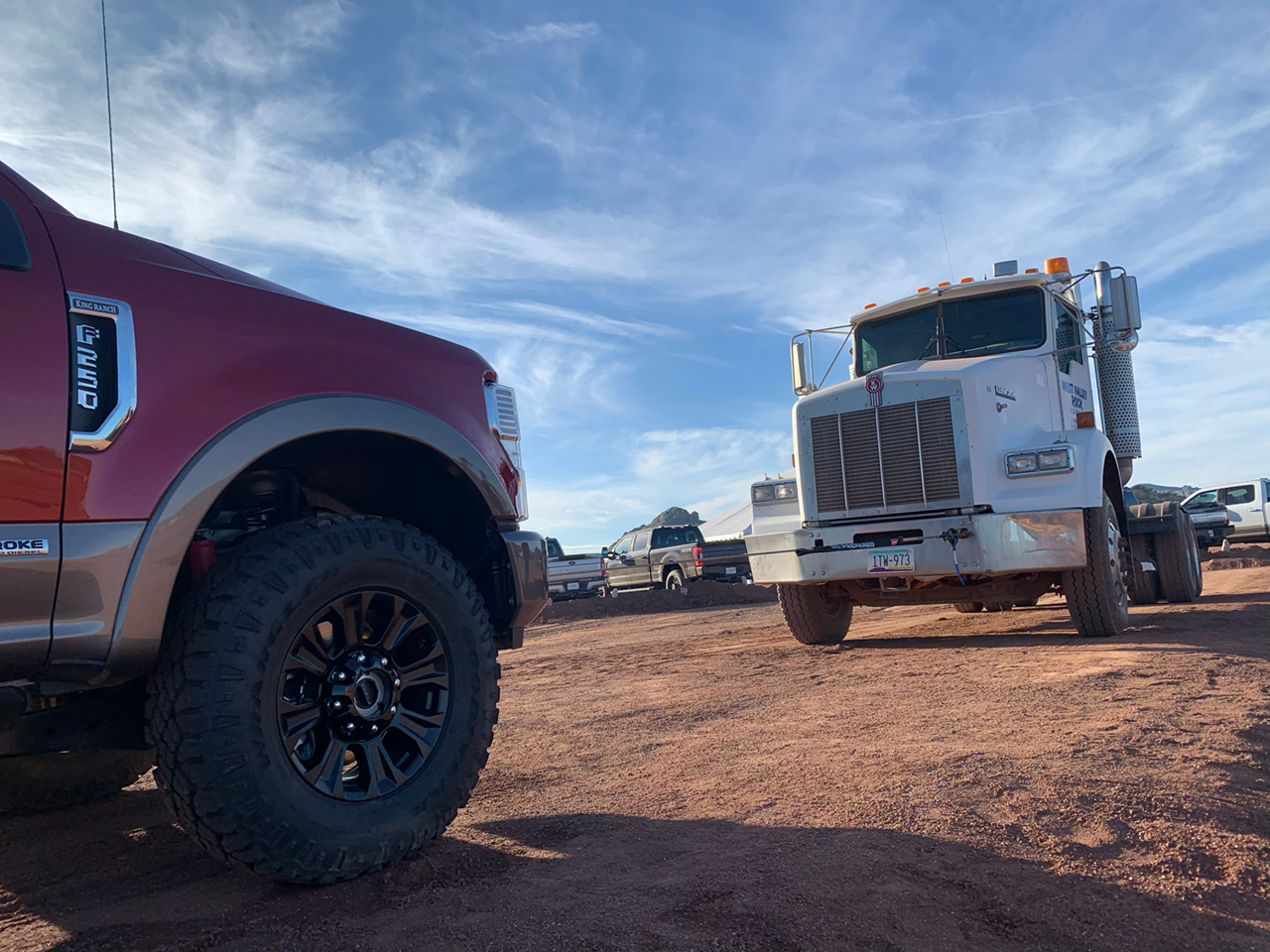 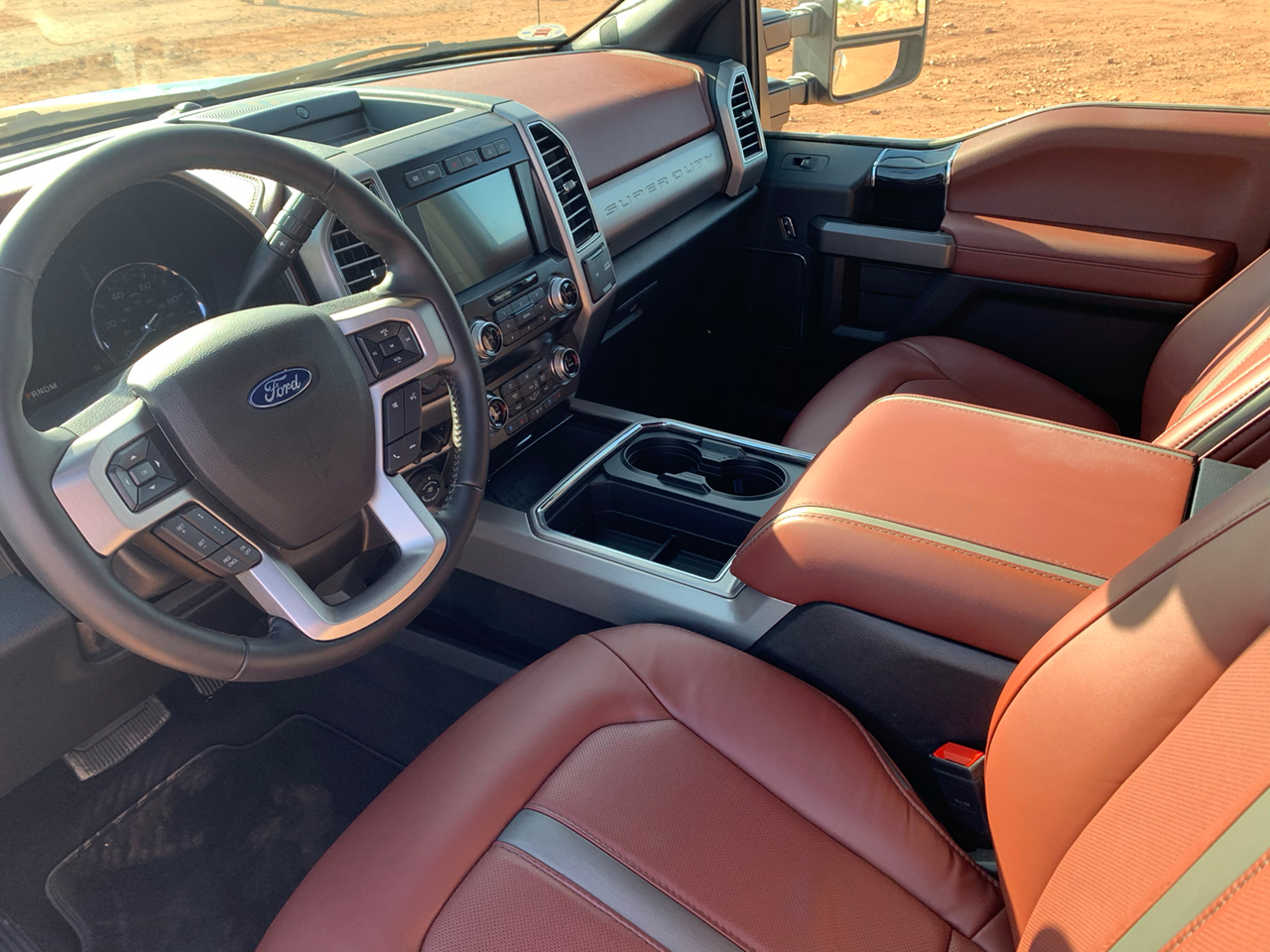 A new Rock Crawl option is added to the selectable drive modes, lending smoothness to an activity otherwise undertaken with all the grace of falling down a flight of stairs while wearing a set of leg irons. Engineers routed various breathers and up through the body to permit Tremor trucks 33 inches of water fording ability. The Velocity Blue example you see on these digital pages shrugged off a rock climb, 27% grade on a loose surface, and a steep downhill tiptoe with the amount of élan usually only seen on the face of Doug Ford when he finds a new tub of hair gel.

There’s a lot to recommend in the 2020 Ford Super Duty, particularly the 1050 lb-ft Power Stroke diesel for those who tow houses and the hand-of-god 7.3L V8 for everyone who doesn’t. Enjoying either of these power trips will require sitting in a cabin that’s rapidly inching towards its best-before date. It’s not a bad place in which to spend time but snazzier accommodations do exist across town.

You can bet it won’t stay that way for long. After all, anything one truck maker can do, another will try to do better. 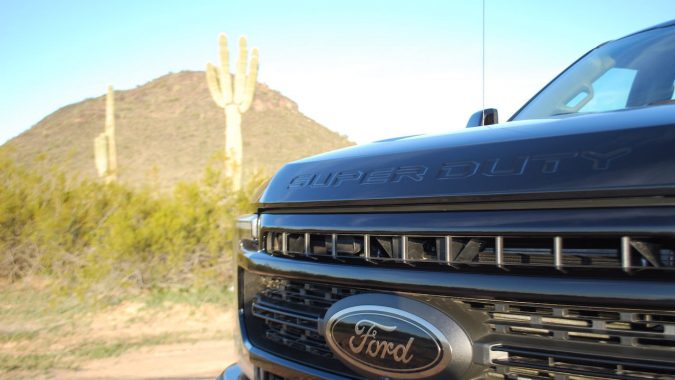 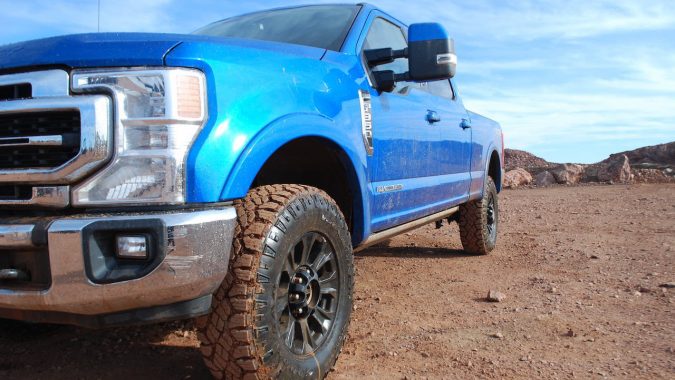 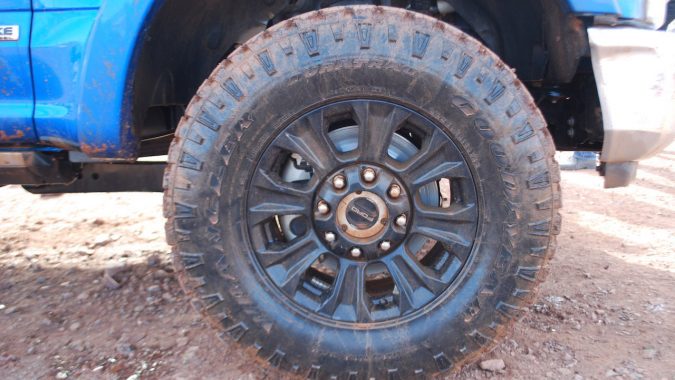 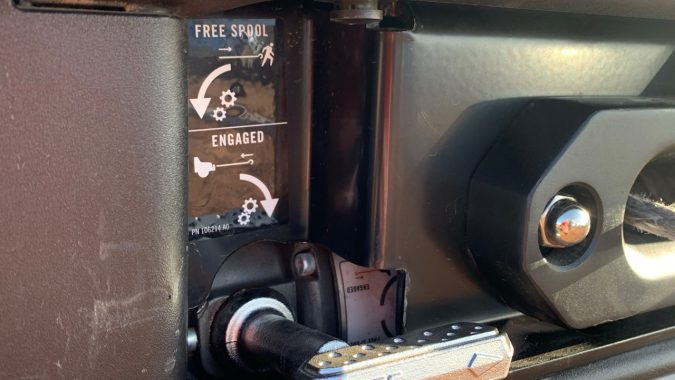 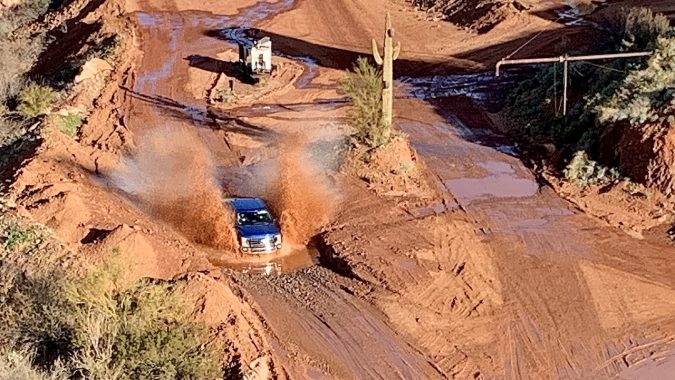 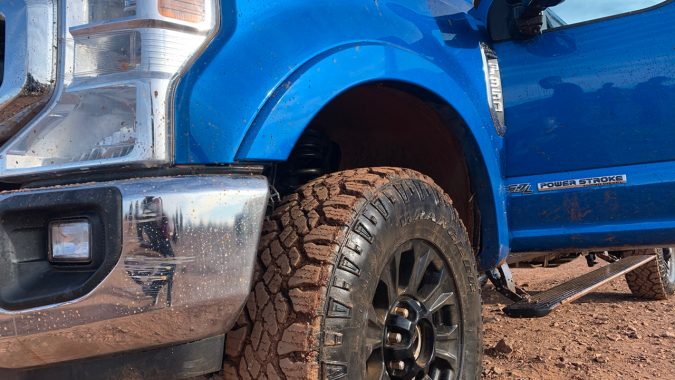 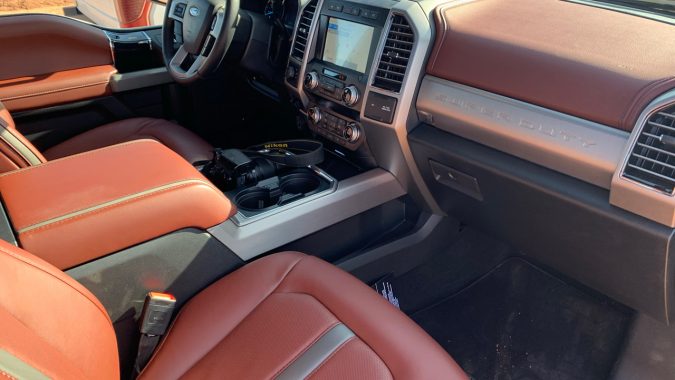