KERRY, Ireland: Audi is on a 2020 model year product offensive, leading off with the A4 reviewed previously here and now the 2020 Q7 SUV with an electric twist.

In addition to the Q7’s base 2.0-litre direct-injection turbo four-cylinder, Audi has gone from the previous supercharged 3.0-litre V6, switching to a twin-turbocharged V6, with the addition of a 48-volt mild hybrid system.

That means the Q7 is now classified as a Mild Hybrid Electric Vehicle (MHEV).

The combined power and torque are 335 hp and 369 ft/lb respectively, with drive through an eight-speed transmission married to Audi’s quattro all-wheel-drive. 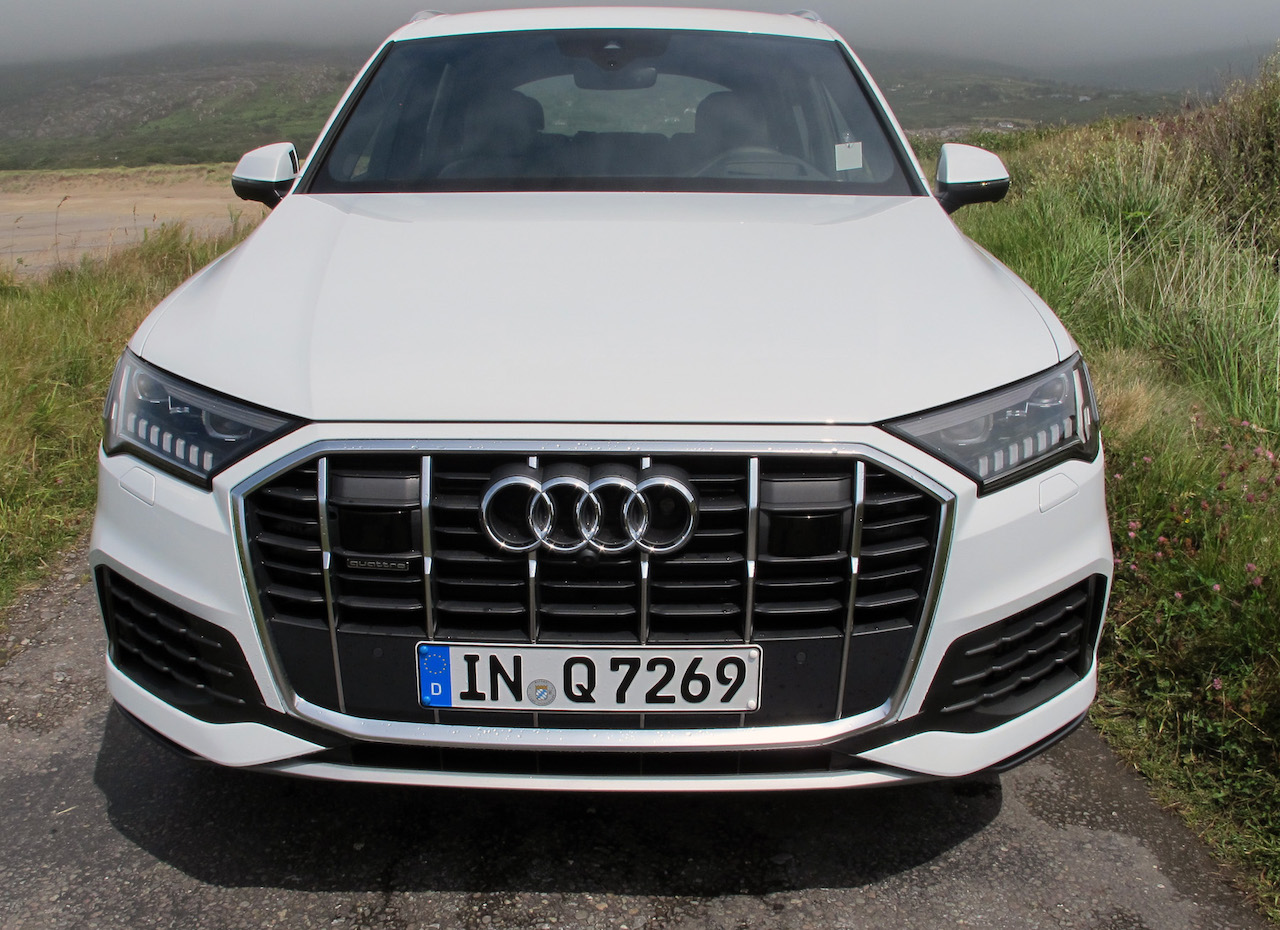 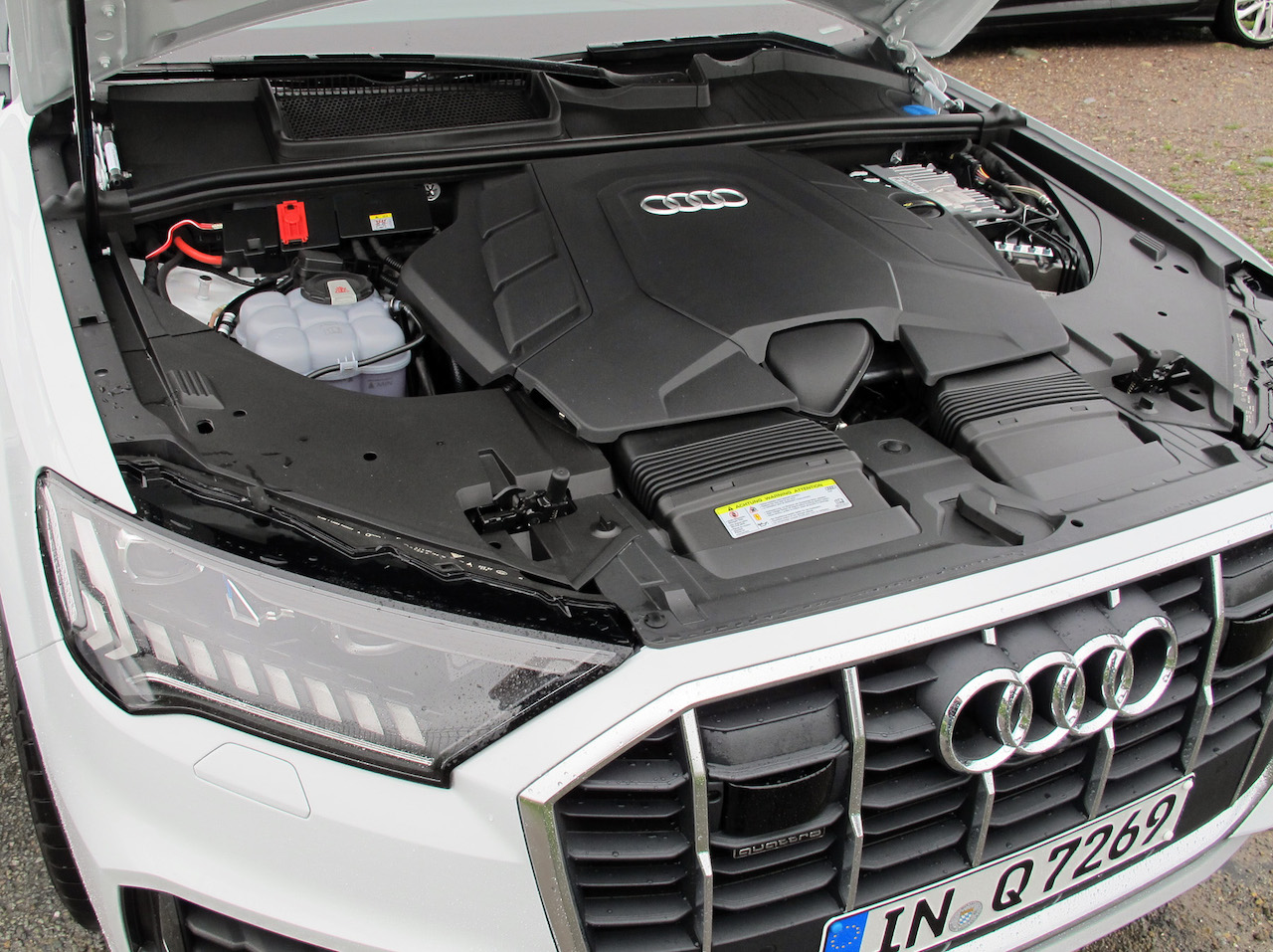 As a mild hybrid, the system is designed to provide additional power at launch or when passing, but the real bonus is it allows the engine to shut down at rest or while coasting to cut back on consumption.

The quattro AWD is a proven system, that in this case, uses a central self-locking differential splitting torque up to 60 per cent to the rear and 40 per cent to the front, depending on conditions.

What we definitely won’t be getting in Canada is the LED Matric HD headlights that shape the light. Instead, Canada will see the ‘laser light’ LED system that is also very bright.

Q7 buyers will have a choice of three suspension systems, with steel springs being the base offering, followed by air suspension and air sport. Air suspension allows the body to be lowered up to 15 mm for high-speed driving and up to 50 mm for off-road going. Also, part of the adaptive suspension is all-wheel steering. 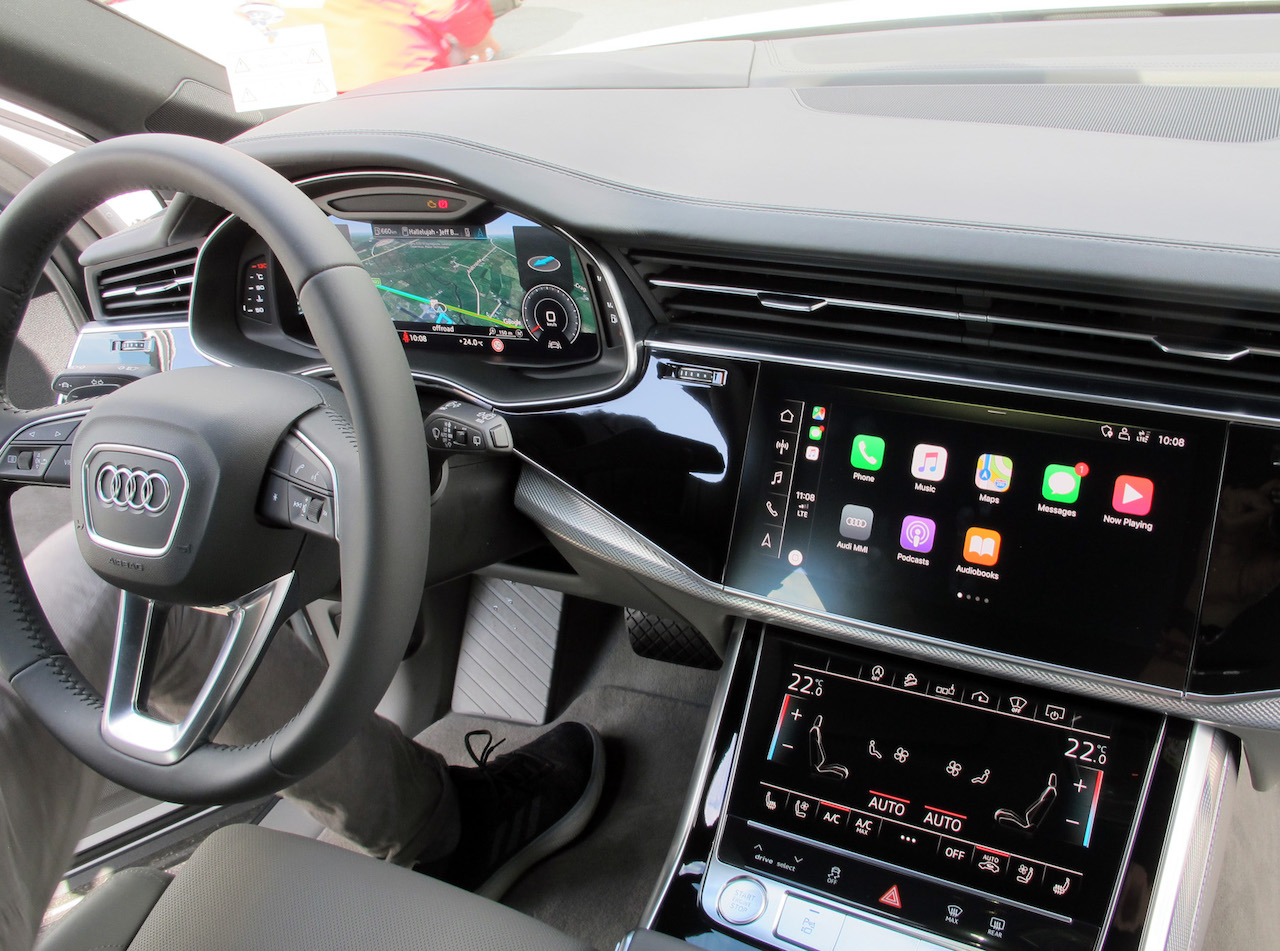 On top of that, the Q7 offers no less than seven driving modes – Comfort, Auto, Efficiency, Off-Road, All-Road, Dynamic and Individual.

And just to add more confusion, there are three Tiptronic transmission settings – Drive, Sport, Manual which, when combined with the suspension choices, results in probably more choices then you need.

The venue for the world media preview of the Q7 was held in Country Kerry, Ireland, with a driving route taking in the 122 km ‘Ring of Kerry” road and a fabulous route it was.

A neighbour was from this area and he was always extolling its beauty and on more than one occasion said, “Why don’t you do one of your car tests in Kerry?”

A good question indeed and, as far as I know, this was just the second time Canadians did a ride-and-drive in Ireland, the other being Saab back in 1992. 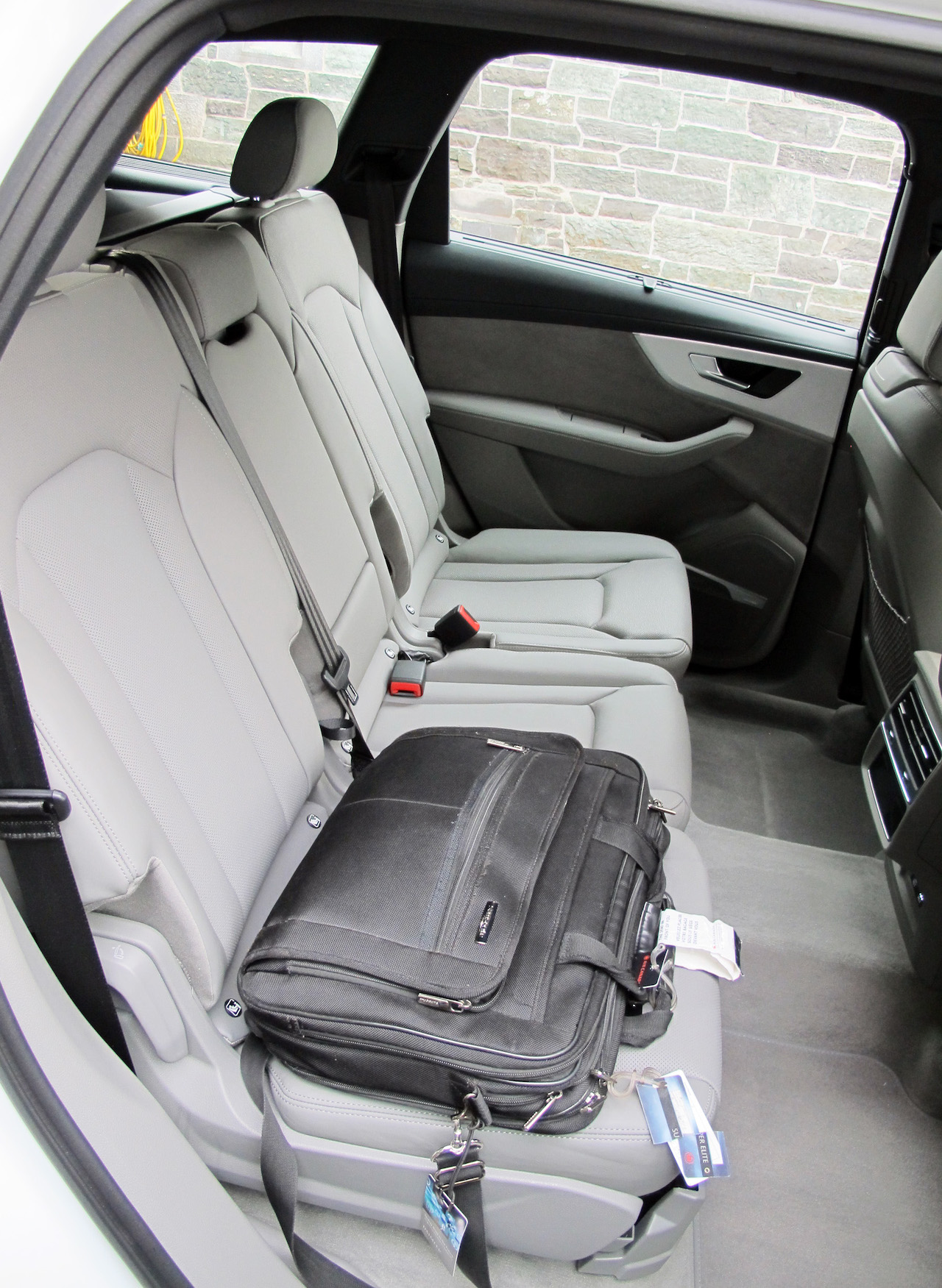 Of course, the challenge in Ireland, as in England and Scotland, is driving on the left side of the road and we were driving Euro/Canadian models with the steering wheel on the left.

Passing was not a lot of fun on the narrow, two-lane roads, but going into a roundabout backwards to what is done here and in Europe was, at first, baffling.

It rained most of time, so I appreciated having quattro in my corner as we rolled along taking in the relaxing scenery and the large number of slow-moving horse-drawn carts ferrying tourists around in the quaint towns along the way.

Following a tip from one of the Audi staff photographers, my co-driver and I threaded our way up and down a one-lane path to a place I later learned was called Castle Cove.

All of a sudden the sun broke through to reveal a breathtaking vista of sea, sands, multi-coloured clouds and green mountains, where I took a photo I will treasure forever. 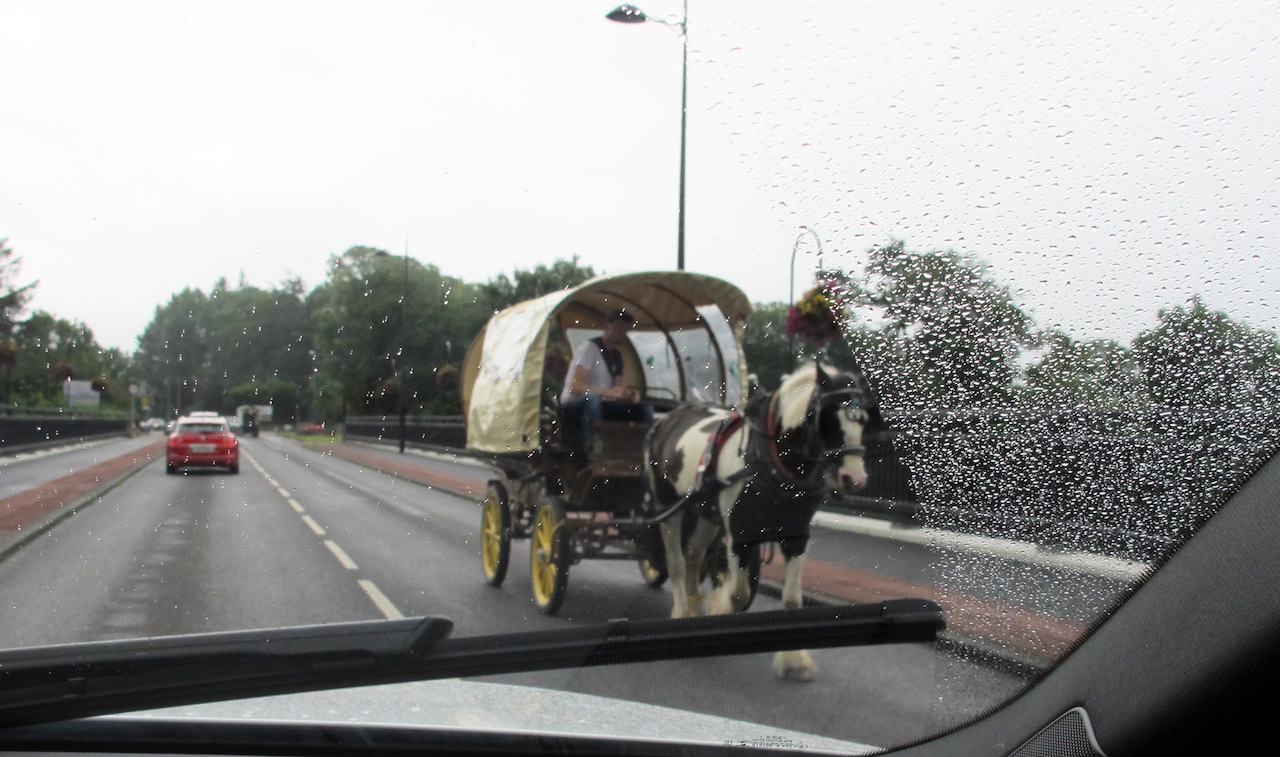 The Q7 we had was equipped with Audi Virtual Cockpit instrumentation where all pertinent information such as speed, revs, fuel and even a map can be shown.

Just to the right is the centre stack twin screen with the top one for infotainment and drive/suspension modes. The lower is for climate control selection and I was told it could be used as a writing surface for inputting addresses into the Navi system, but that seems superfluous when you have voice activation as well.

Ride time was brief, but the many changes and enhancements on the 2020 add up to more than the sum of the parts – making the 2020 Audi Q7 well worth waiting for.

Being sold as a five- or seven-seater and in three trim levels, fuel consumption and pricing were not available at the press preview and will be released closer to the 2020 first quarter. 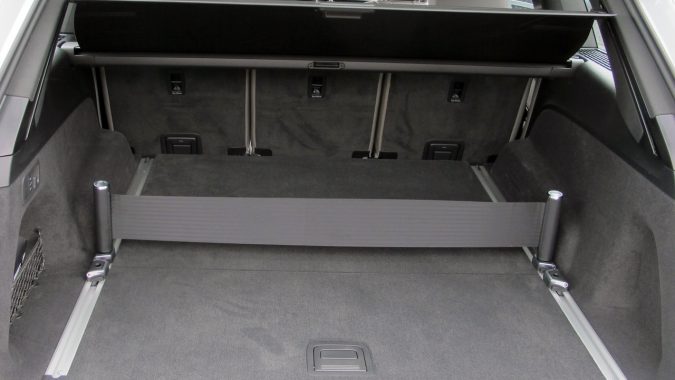 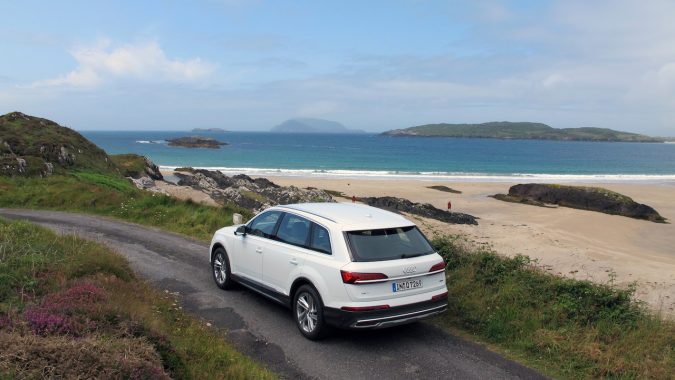