Mercedes says that there are more than 1,000 different configurations of the Sprinter van.

Charleston, South Carolina – Mercedes-Benz showed off a pair of new vehicles this week, and while one is a whole lot more glamorous, the other is likely more important to the company. It’s a big deal, and that’s a reference to the size of the beast. This one is even coming with an all-new factory to produce it.

Mercedes says that there are more than 1,000 different configurations of the Sprinter van. That’s probably more than last year because the new version expands with a new 1500 model that’s not a less capable version, but one that has the capability of the old 2500. The new 2500 is now carrying a higher gross weight rating. We have no doubt believing the 1,000 different versions, and that’s before you even start talking to custom outfitters about making this van into what your business needs.

The number of configurations is utterly baffling, but Mercedes is spending the next month showing dealers how to help you find the one that best suits your needs. We’re not talking SE or LE here, or even quad cab versus super cab. The Sprinter offers up passenger and cargo versions for a start. But then there are different wheelbases, 3,660 or 4,332 mm.

Plus you can even get the long wheelbase in an extended version that makes it 410 mm longer behind the rear axle. And there are 1500, 2500, 3500, and 4500 options that give fleet operators payload ratings that run from 1,298 to 3,395 kg. Plus diesel and gas engine options, roof heights of tall or NBA-grade tall, and up to 15,000L of cargo volume. That’s as much as 52 SL Roadsters (with the top up, of course), or 8.2 E-Class wagons. If that’s not enough, the Chassis cab model can be fitted with a flatbed. Or an RV body, or a mobile tool chest. 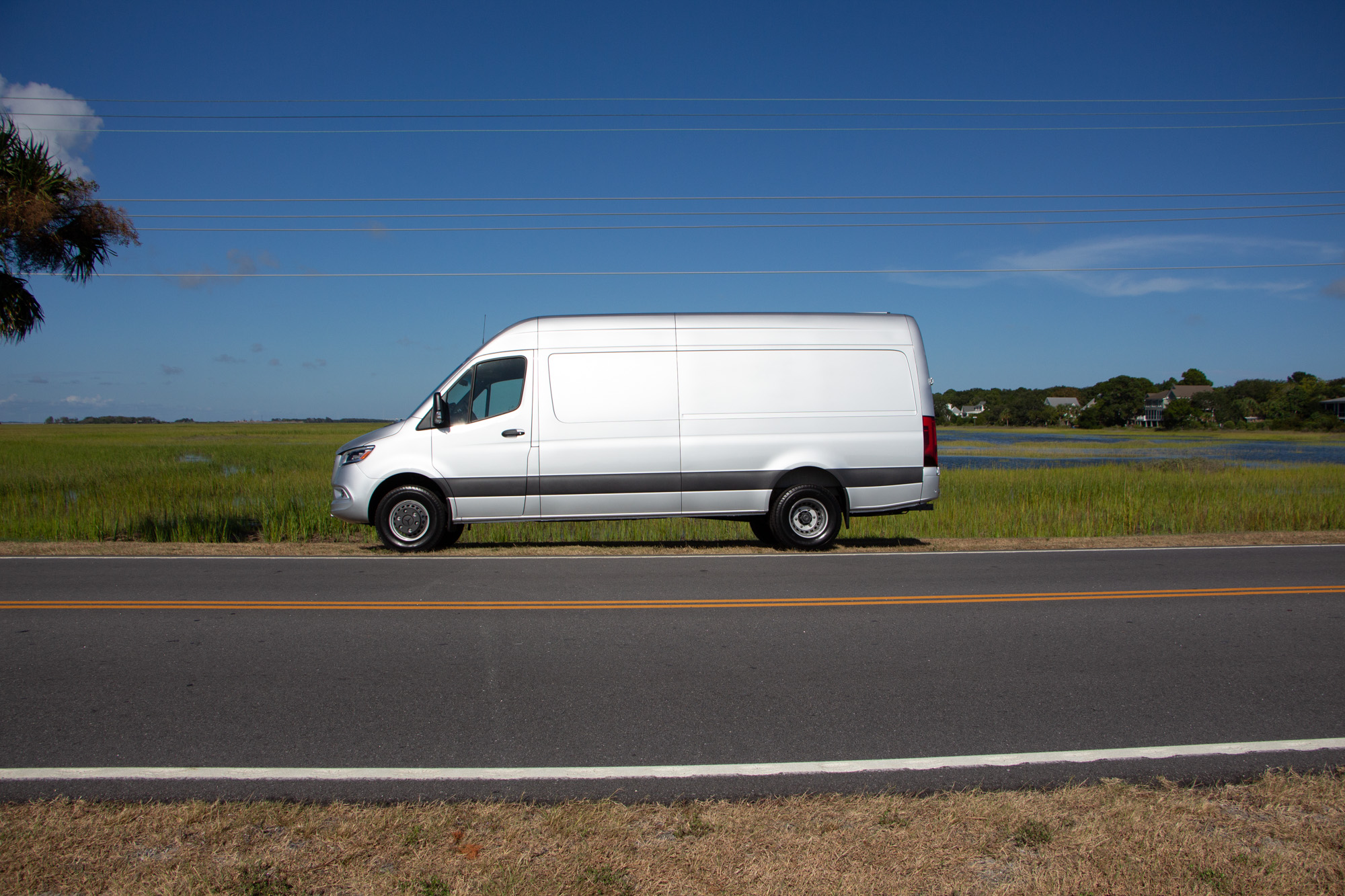 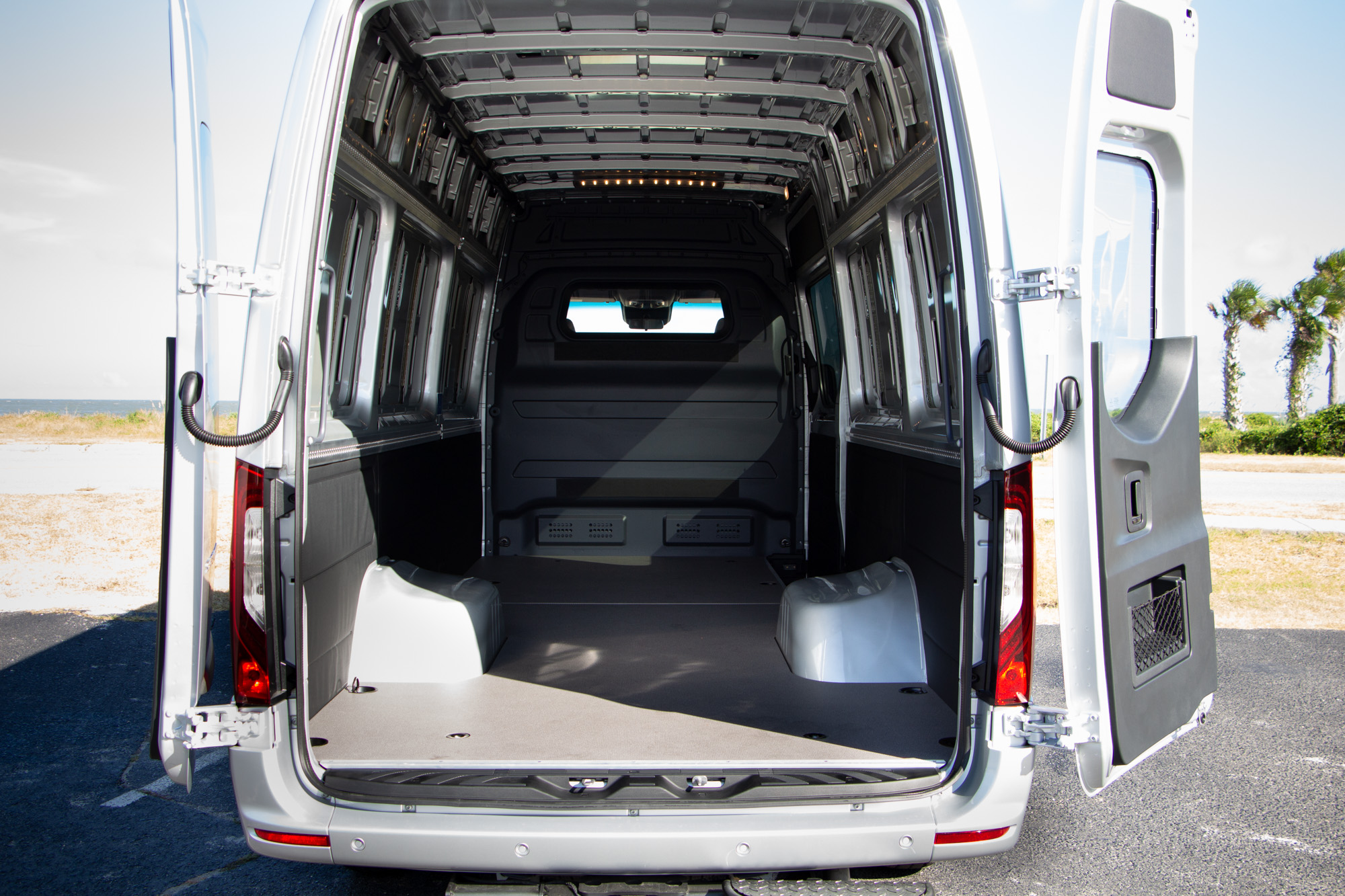 That’s the best part of the high-roof style van that Mercedes pioneered in North America with the Sprinter in 2001. What you can do in the box is limited only by your imagination and the max payload rating.

The new Sprinter is loaded with tech. Stuff you wouldn’t expect in a van. Like an available 10.25-inch screen using the all-new MBUX (that’s MB-UX, not embucks, the Mercedes reps are very insistent to point out) infotainment system. Even on the smaller 7.0-inch screen, it looks gorgeous. Which it should since it’s straight out of the new A-Class and will be headed across the Benz lineup in a hurry. It’s smooth and quick, and it will offer the “Hey Mercedes” smartphone-style assistant next year. U.S. vans get it this year, but we’ll need to wait until next model year.

That’s not the end of it, though. Even more tech options are on the table, like automatic braking, rear cross-traffic alert, 360-camera, and even radar cruise control. Which is operated from a steering wheel that is, again, one from the Benz parts bin. Or at least looks and feels like it is.

It’s the most interesting part of the Sprinter. Where the Transit looks to have cribbed from the Ford Focus parts bin, and the ProMaster is from, well, it’s not from Alfa, that’s for sure, the Sprinter’s interior is what you’d expect from a Mercedes. In the cockpit, at least.

The materials are more heavy-duty than what’d you’d expect in a C300, but the basic look is surprisingly on-brand. Even the cool HVAC vents from the modern Benz lineup are there, just without all of the chrome trim and fancy finishes from the cars, and the climate control adjustment dials are the same physical buttons that send the 63-series AMG models into Sport + mode. The nifty Mercedes door-mounted seat controls are present, and the up to eight seat memory positions are probably a lot handier in a shared work vehicle than they are in your family sedan.

If Mercedes decided that they wanted to offer up some of the open pore ash trim, Burmester sound systems, and ventilated seats in here, they wouldn’t seem out of place. Especially since some versions already offer a wood floor covering.

Keep looking on the top of that long and wide dash and there are three extra gloveboxes up there. With three USB-C ports and a 12V port in the middle one. Over the driver’s head, there’s a small lockable storage space, with an open one over the passenger.

The cab offers impressive visibility through the massive expanses of glass. Out the front, at least. You’ll be glad to have the blind spot monitoring and an available surround-view camera to see anything out the back. 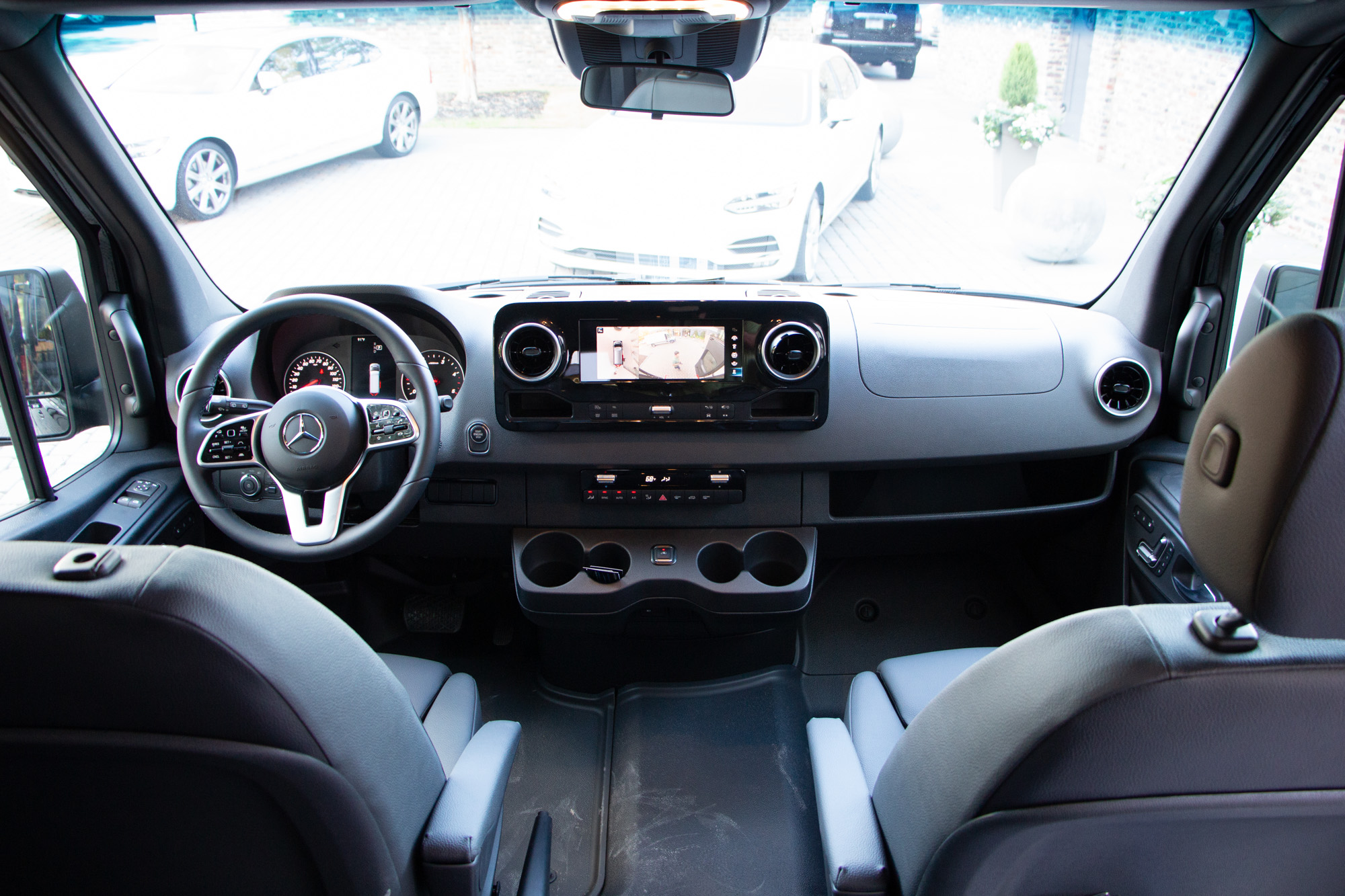 The seats here are comfortable, and my tester even had an adjustable thigh bolster. The driver’s seat is much more comfortable than the passenger one, though, which is odd. The other miss is for front-seat passengers who are long of leg. The seat controls are trying to occupy the same real estate on the door panel as your knee, which can lead to sudden random seat relocations. When I say can, I mean will, for me, at least.

There are two powertrains on offer in the Sprinter. A 2.0L turbo four and a 3.0L V6 diesel. Both give you 190 hp, but the diesel offers up 66 more lb-ft of torque at 324. With great torque comes fewer gears in the transmission. Seven instead of nine. Not all engines are on all trims, though, like the gas-only 1500 or the diesel-only 3500 XD extended. 1500 and 2500 models come with a single set of rear tires, but 3500 models are either dually or super single. The latter uses an extra-wide tire that offers dual-rear-wheel load carrying with a width that leaves more space inside the box.

We didn’t have gas versions to drive, but unless you really rev the diesel using the paddle shifters, and yes there are paddles on this van, you’ll be hard pressed to tell that you’re in the diesel.

Until you want the torque, that is. The diesel moves this van along relatively quickly, and though it won’t be as brisk as the more powerful options in the competition, it’s still enough that you had better make sure your cargo is secured. There’s some lag from a stop, but it does have about 10 metres of driveshaft to get moving and four rear tires to prod into motion.

On the road, the van feels more car-like than any full-size pickup. The difference is that it feels like a car that happens to weigh the best part of two and a half tonnes. The steering is responsive for something this big without being twitchy. Same goes for the brakes, just keep in mind that it’s going to take a touch longer to stop than you’re used to.

Gone is the odd dashboard shifter of the last generation van, in favour of a column mount. That shifter looks a bit delicate for something this heavy duty, but feels more durable than it looks.

While passenger versions offer seating for up to 15, and look to have enough room behind the last row for yet another row of seats, the cargo van with that big empty box is where it really shines. 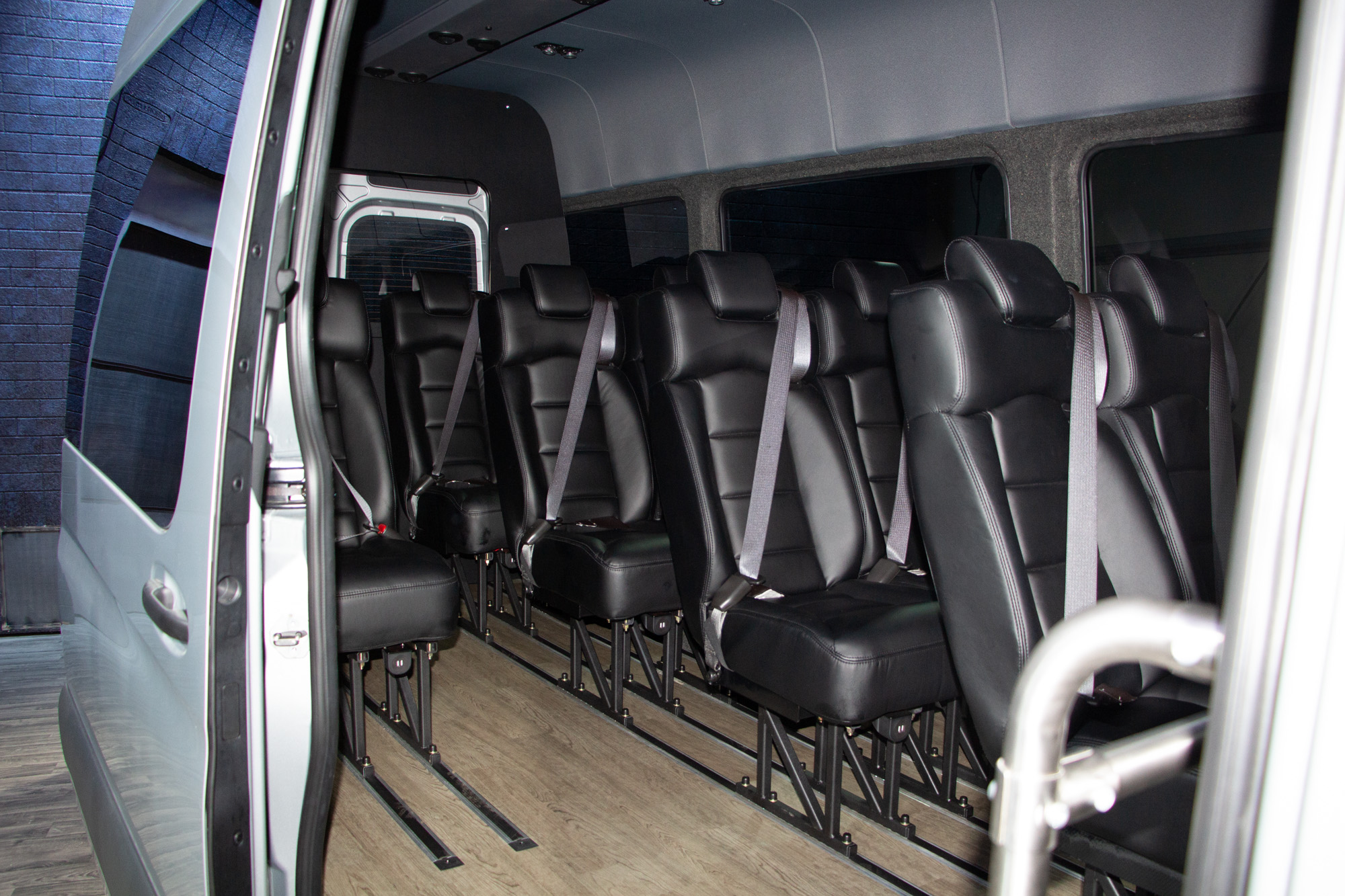 I’ve driven big empty cargo vans before, and the only thing that out clatters the older diesel engines is the interior. Everything moves, rattles, and echoes in that huge chamber behind the driver. The new Sprinter felt impressively solid. No rattles, no clangs, with improved sound deadening to keep the mobile office quiet.

If Mercedes doesn’t offer enough options for you coming out of the back of the factory, they’re more than happy to send it to an outfitter that can add just about anything you can think of to the van. Mobile bike shop, tool crib, even a dentist office. And yes, they’ve really made one of those.

But the big and comfy van adds an interesting possibility for families who need a little more than the cramped third row a midsize SUV offers. You can get seating for 15, but you can spec out fewer seats too. And the shorter roof and wheelbase. So you can have Mercedes luxury up front and room for a half-dozen or more kids plus luggage. Forget folding strollers, just park them en masse, assembled in the back. And your dealer will probably be able to find you a ramp to save you some lifting.

You’re going to see a lot more of these big boxes on the road, and while they look similar to the old version, the available LED headlights will make sure you know which one you’re looking at. It also doesn’t hurt that Amazon just announced a deal to have 20,000 of them added to their delivery partners’ fleet by the end of next year. That’s about an extra 50 percent added to last year’s North American sales.

The newest Sprinter offers a package that makes it easy to forget you’re in a van. Which is probably what most people in vans are hoping for. This is a very large travel trunk, but it’s definitely no penalty box. Why? Cause it’s a Sprinter, Sprinter night. And no one’s going to save you from the van about to strike 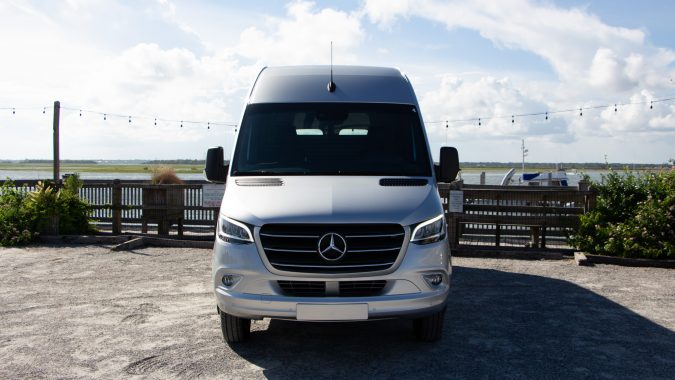 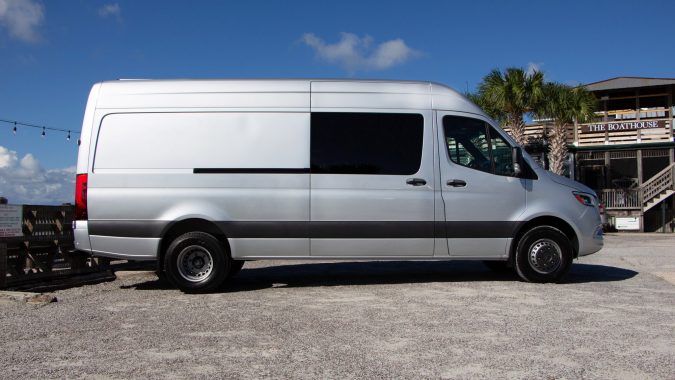 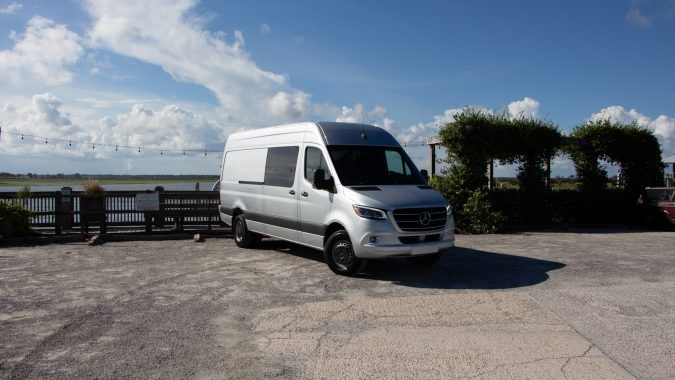 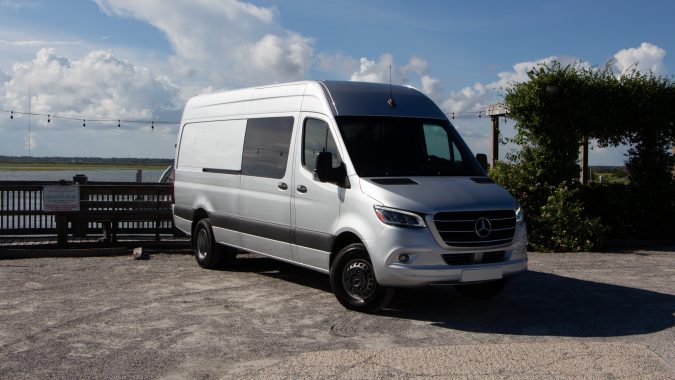 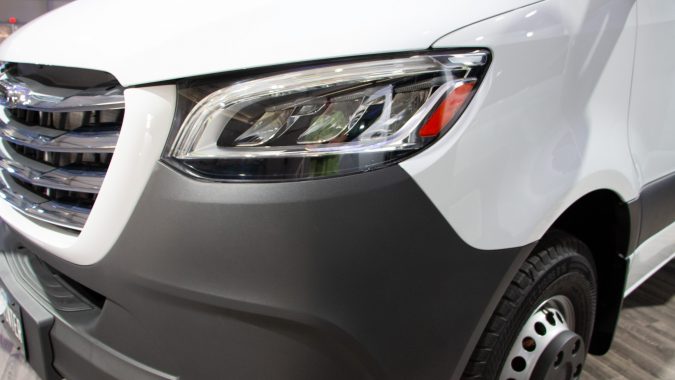 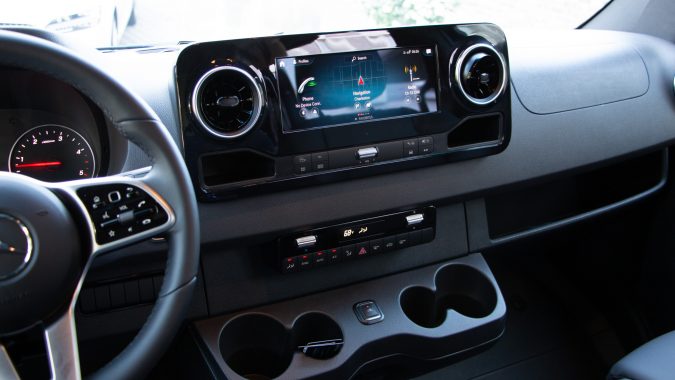 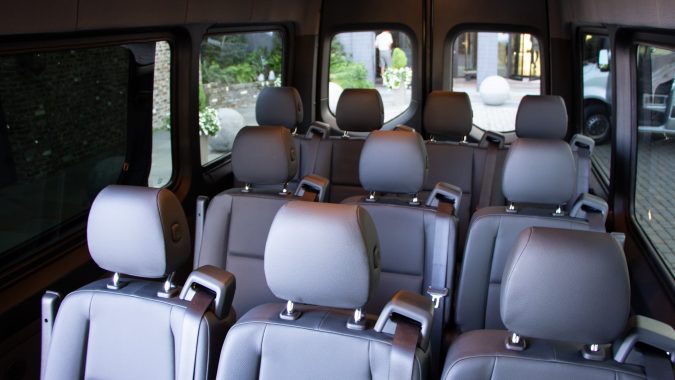 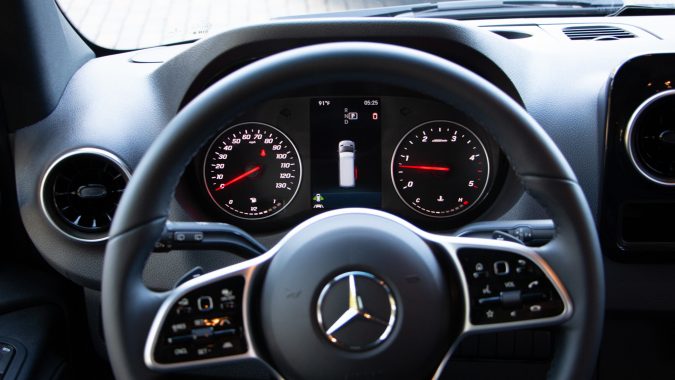 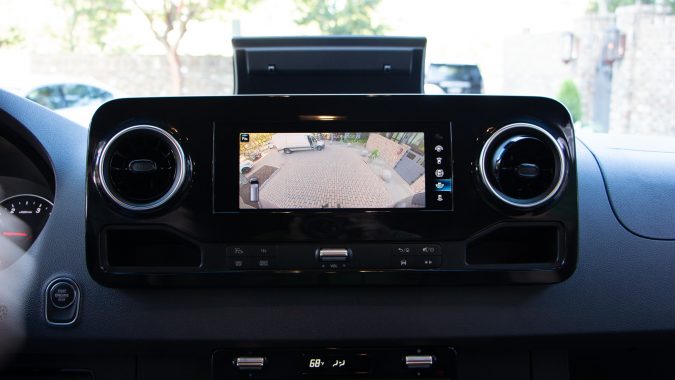 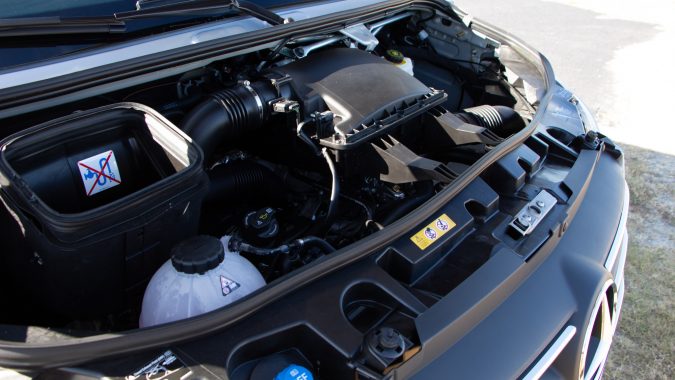 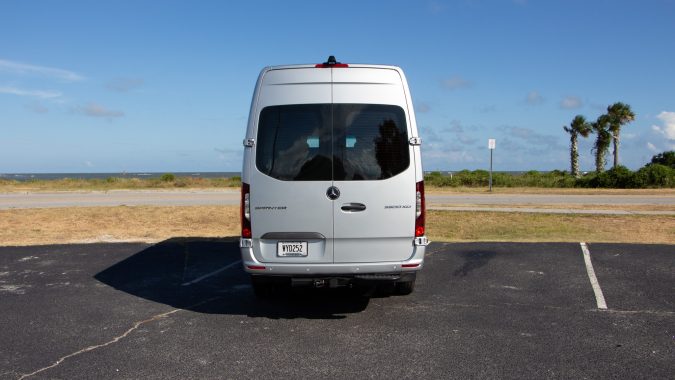