NASHVILLE, TN: The 2019 Lexus ES 350 and ES 300h are not only crucial sedans for Canada but also for the luxury car builder globally.

Lexus is now sold in 90 countries around the world. And behind the U.S., China and Japan, Canada is the largest market for the brand.

Now in its seventh generation, getting the new ES right was a main thrust of the message coming through at the media introduction held in Nashville, TN.

So important is the new ES that Lexus held simultaneous reveals earlier this year in Beijing and Los Angeles.

And driving that home even further was the appearance at the North American media launch of the key engineering team from Japan and officials from the assembly plant in Kentucky where the ES will be built.

Built on the all-new K (GA-K) global platform, a 50 mm longer wheelbase compared to the outgoing model allowed the engineers to take advantage of the wider front (+10 mm) and rear (+37 mm) tracks to really push the wheels out to the four corners.

To highlight the new shape there are two grille treatments – one for the ES 350 and ES 300h with vertical bars and a blacked out version for the ES 350 F Sport.

All ES models are front-drive with an eight-speed automatic transmission and both ES 350s are powered by a 3.5-litre direct injection naturally aspirated V6 producing 302 hp and 267 lb/ft of torque, up by 34 hp and 19 lb/ft over the outgoing model.

The ES 300h, as the name implies, is a hybrid with the fourth generation Lexus Hybrid Drive System that combines a 2.5-litre, Atkinson Cycle gasoline engine and 1.59 kWh nickel metal hydride battery for a combined 215 hp. Lexus does not release hybrid torque ratings.

Because the battery is now smaller, it fits under the back seat with no sacrifice of cargo volume, which is the same for all three ES versions at 473 litres.

The comprehensive Lexus Safety System+ 2.0 is standard and features new technology such as daytime bicyclist detection, which is part of the comprehensive Pre-Collision System (PCS).

PCS has also been enhanced to help better detect a pedestrian at night by increasing the radar’s sensitivity and dynamic range.

Driving the 300h in the morning at the media launch, the route was a familiar one combining freeway, quiet country roads and the picturesque Natchez Trace Parkway.

Quiet was the overriding impression even when the engine was propelling us down the freeway at the speed limit.

Quelling noise intrusion into the cabin was a major design objective. An example is the use of sound deadening materials that now cover 96 per cent of the floor pan up from 68 per cent on the previous model. 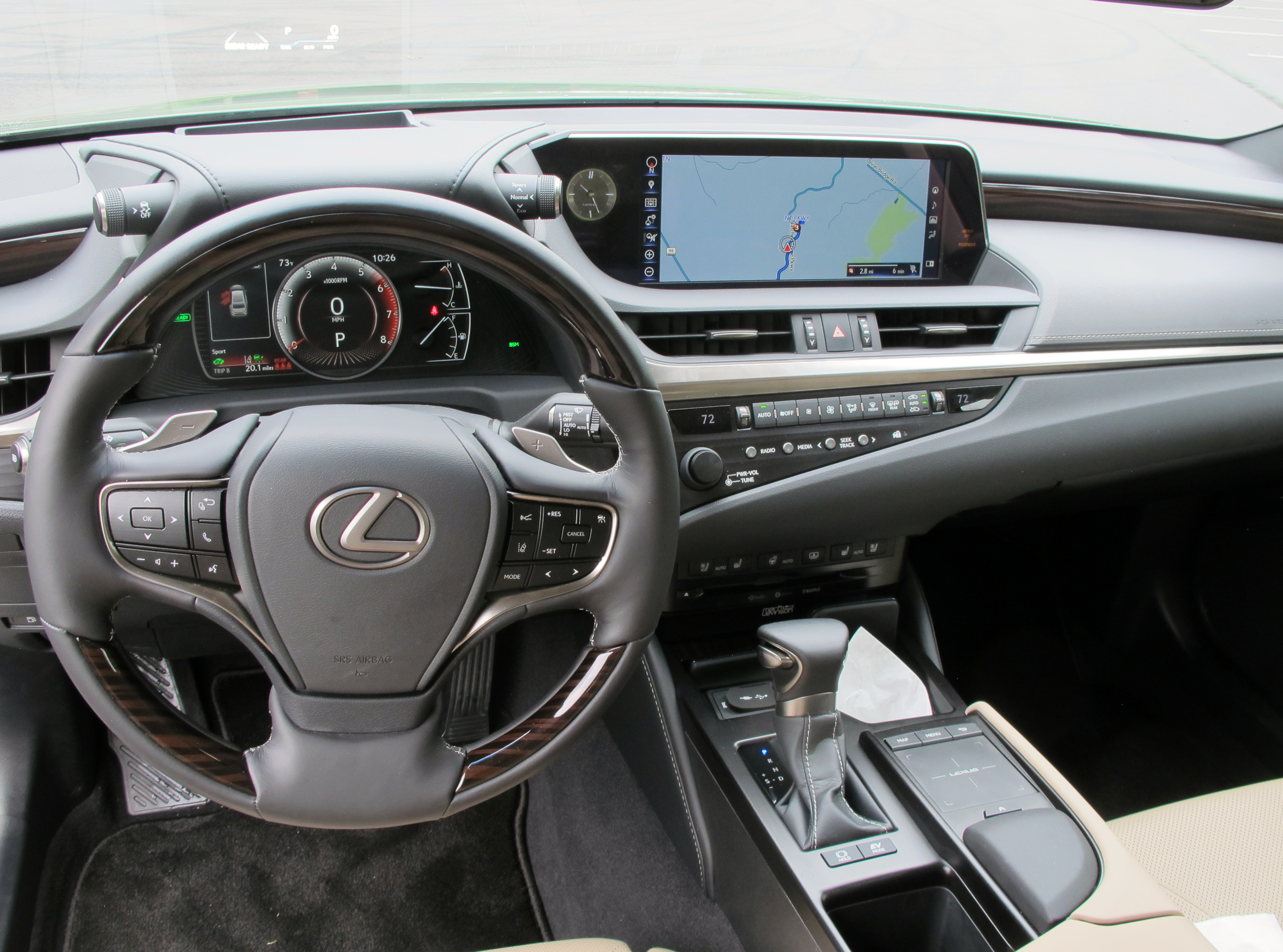 You might ask why buy the F Sport model when it shares the same platform, engine, front-drive and transmission with the entry level 350?

The answer is the available Adaptive Variable Suspension (AVS) that replaces the normal Dynamic Control Shocks with adjustable dampers. Similar to the system on the flagship LC Coupe and LS Sedan, AVS is capable of 650 levels of adjustment.

All ES models have a drive mode selector that is a rotary knob placed sideways into the top right of the main instrument cluster with choices being Eco, Normal and Sport on the 350 and 300h.

But on the F Sport with the Adaptive Variable Suspension, Sport mode is replaced with Sport S/Sport S+ and Custom.

I suppose Eco and Normal have their place in everyday driving, but in Sport S you can feel things tighten the split second after turning the drive mode selector knob from Normal.

With the much-changed front and rear suspension, the F Sport turns the ES into a true sports sedan.

And if you turn the knob to Sport on the 300h, torque is boosted at lower speeds and the driver can use the paddle shifters that offer six simulated gears.

Another key design goal was trying to place all gauges and displays in the driver’s line of sight ahead and lessen eye movement as much as possible.

Interesting is the way the ES integrates near semi-autonomous driving with an upgraded Lane Departure Alert (LDA) with Lane Trace Assist (LTA).

Not only can it “see” lane markings, but it is designed to detect and follow the boundary between the pavement and a soft shoulder such as grass or dirt.

Coupled with an enhanced version of the Lexus Dynamic Radar Cruise Control System, hands off the wheel and foot off the brake driving is possible.

More than a mid-size luxury sedan, I came away feeling that the new ES is actually a smaller version of the topline LS Sedan with all the attributes but not the girth or cost. 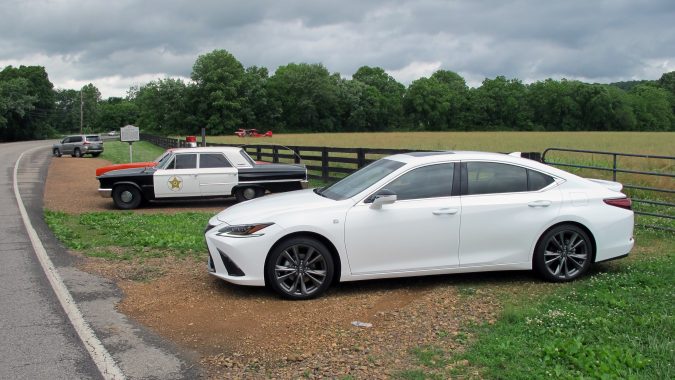 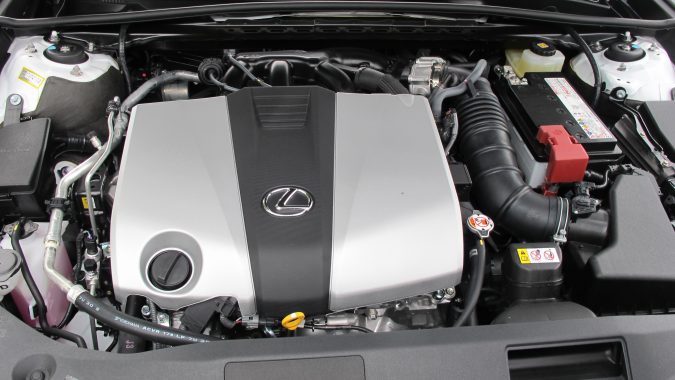 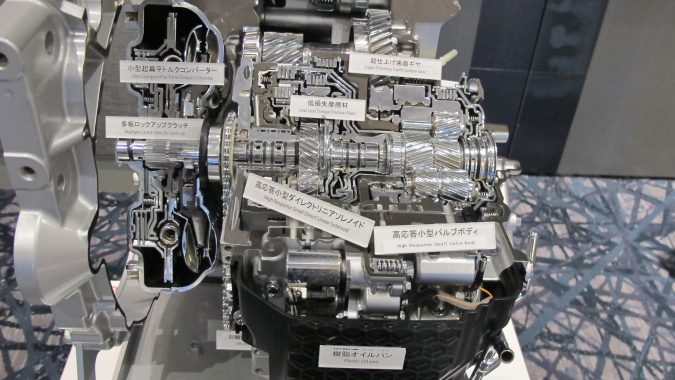 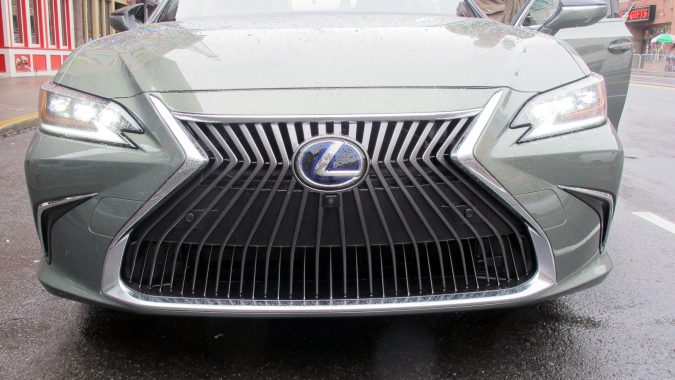