Evoque Holds it’s Own Against its Big Brothers

The design lines are a bit of a radical departure from Range Rover’s usual stout and stately look, it screams adventure and fun, although stylish and energetic looking it is still easily recognizable as part of the Range Rover stable.

The baby Range Rover hasn’t really changed much since its introduction over six years ago.

It had a bit of a facelift for the 2016 model year, which included updates to the front bumper, the addition of hood vents, adaptive full-LED headlamps and a swish new rear spoiler, but as the saying goes “if it ain’t broke, why fix it”.

The design lines are a bit of a radical departure from Range Rover’s usual stout and stately look, it screams adventure and fun, although stylish and energetic looking it is still easily recognizable as part of the Range Rover stable. 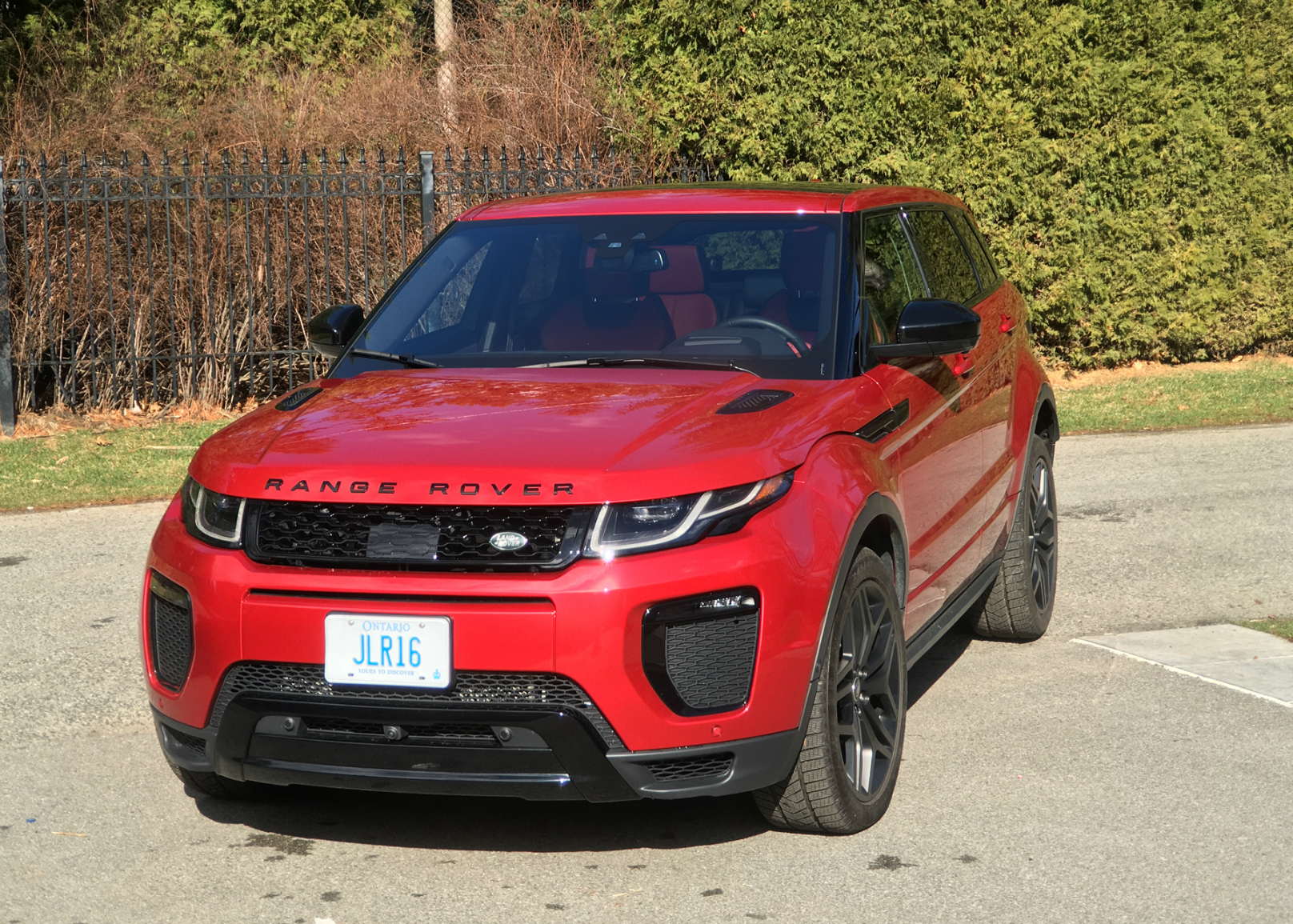 The HSE Dynamic model tested here is further enhanced with the Black Package ($2,300) that included 20-inch satin black wheels with V-rated tires, black bumper guard’s back and front and smoked front Lamps. These combined with the optional Firenze Red colour scheme ($650) gave the Evoque a far more aggressive stance from every angle.

Internally the fit and finish is exactly what you would expect from Range Rover, the choices of materials and look are at the very top of the scale.

This HSE Dynamic came with the Luxury Seating Package ($1,750) that included eight-way driver and front passenger seats with memory; massaging climate controlled front seats with the rear seats being heated. 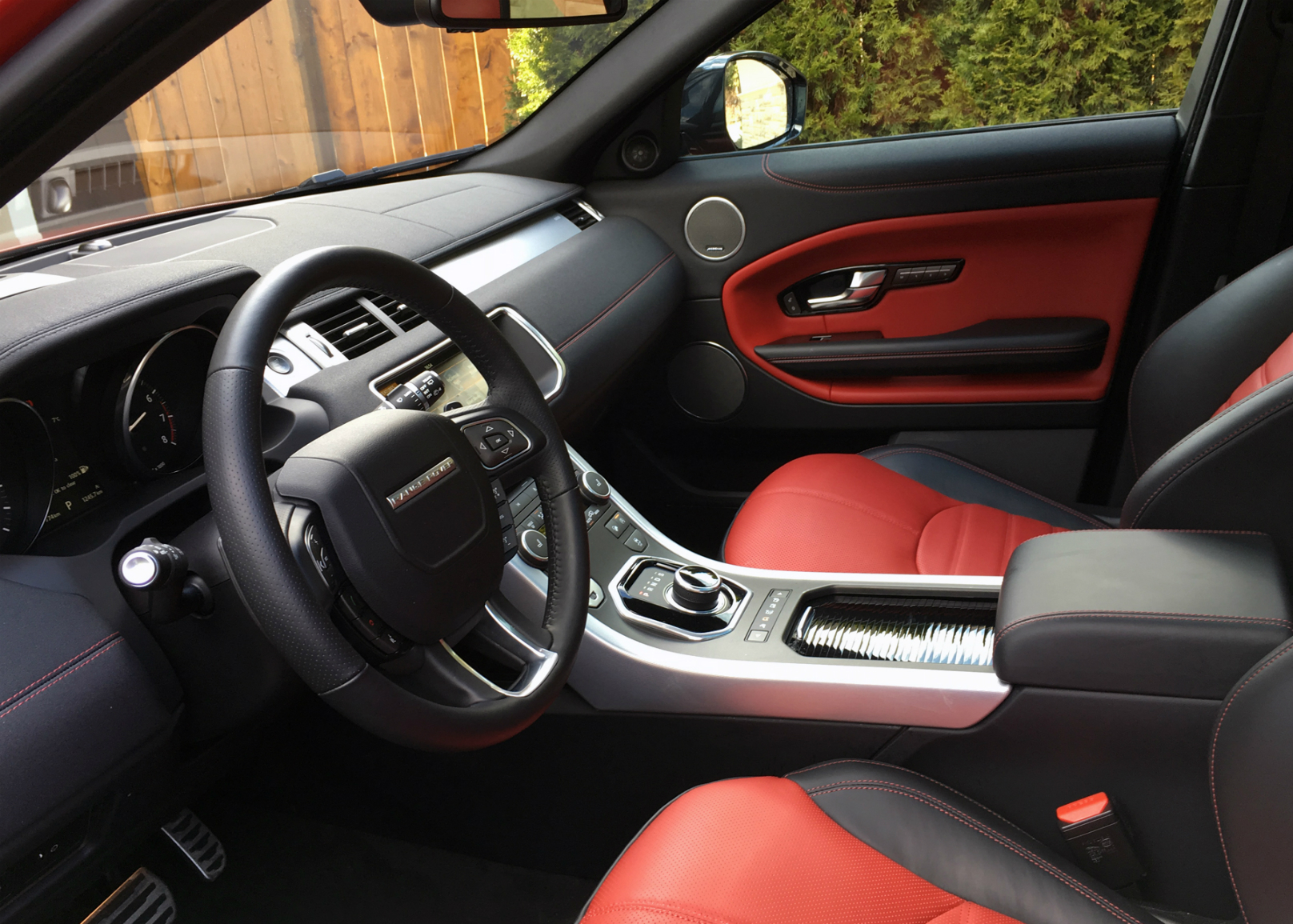 The rear seating has adequate space for two adults and has more headroom that I would have expected, especially judging by the external styling with its sloping roof and pinched rear window.

The fixed panoramic roof helps make the interior cabin appear more airy and spacious and comes with a power blind to keep the cabin cooler in warmer days. 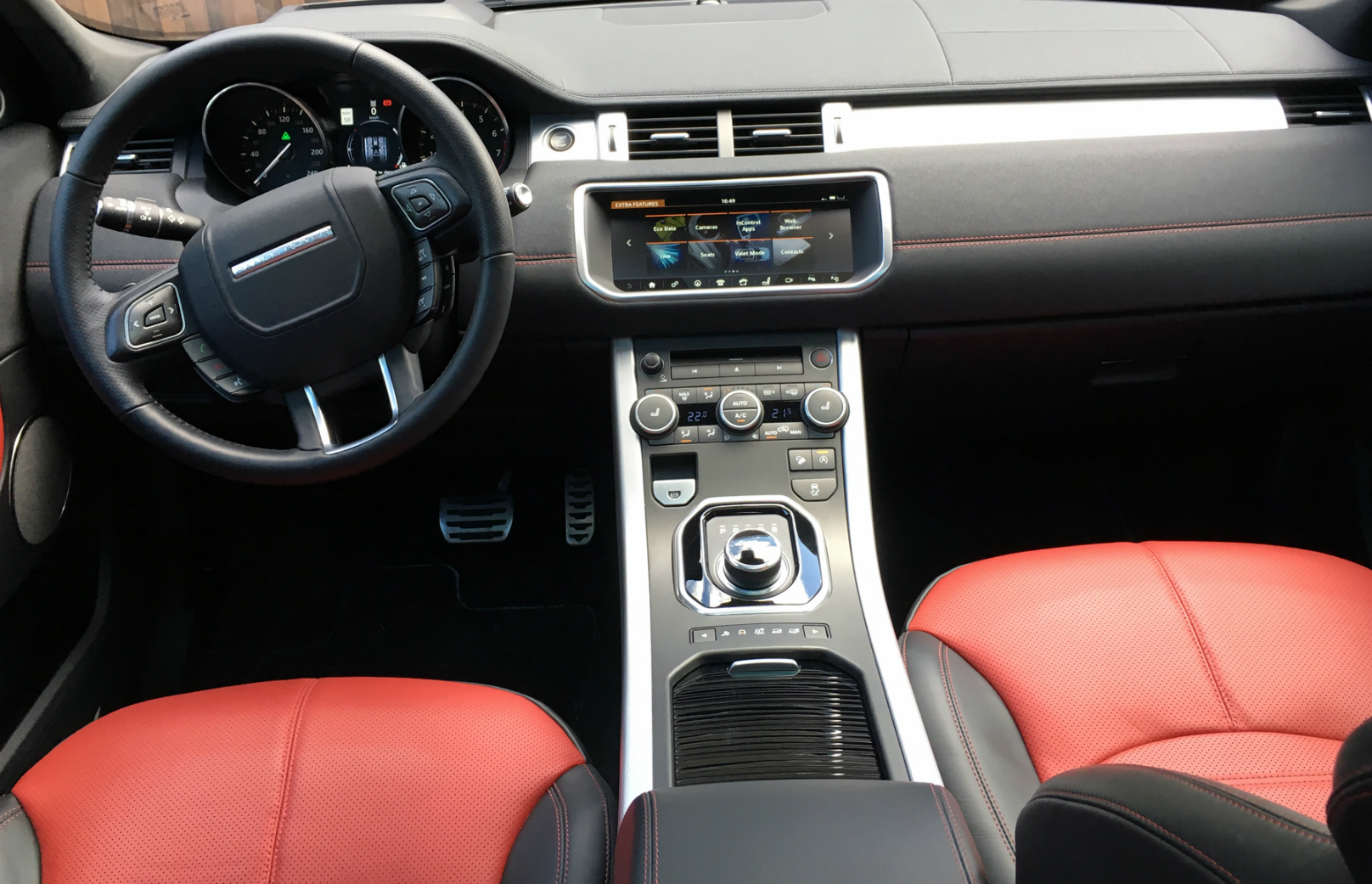 The centre console sits high and flows nicely up to meet the dashboard just below the 10.2” high-resolution infotainment screen.

The only engine choice in Canada is the 2.0L turbo charged, in-line four-cylinder that produces 240hp and 250lb/ft or torque and is matched up to a silky smooth nine speed automatic transmission.

As you would expect, the Evoque comes with 4WD as standard and includes a plethora of off-road optional enhancements that include Terrain Response.

The five selectable driving modes are set up to be able to handle most driving conditions; General Driving, Grass/Gravel/Snow, Mud and Ruts and Sand. The system optimizes the engine, transmission, differentials and chassis to best control slippage and traction to ensure safe passage without losing control or comfort.

Also included is All-Terrain progress control, which takes care of maintaining a steady speed, freeing up the driver to concentrate on steering. Hill Descent Control is also offered as standard.

When first seated the cabin feels a little tight, but this feeling soon wears off as you become accustomed to your surroundings. 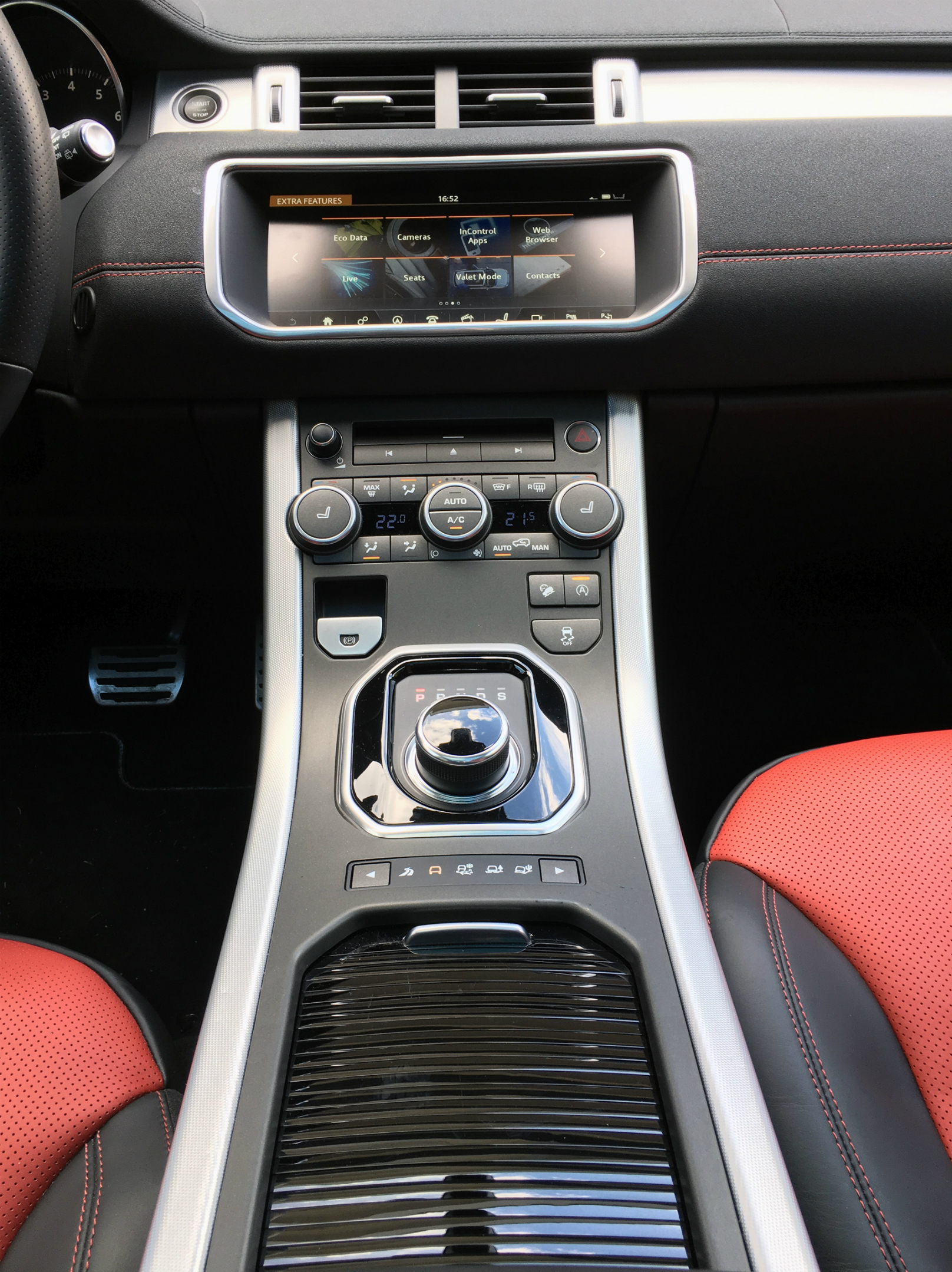 Visibility through the rear window isn’t the greatest, but with proper wing mirror placement, is easily overcome. This is further enhanced by the optional surround 360° camera system that enables you to see any point around the vehicle that isn’t covered by the mirrors or line of sight.

I was surprised by the acceleration from the 2.0-litre. It is nimble right from the get go with gear changes being quick and ever so smooth.

I was expecting way more engine noise from the small engine but even under hard acceleration wasn’t noticeable from inside the cabin. 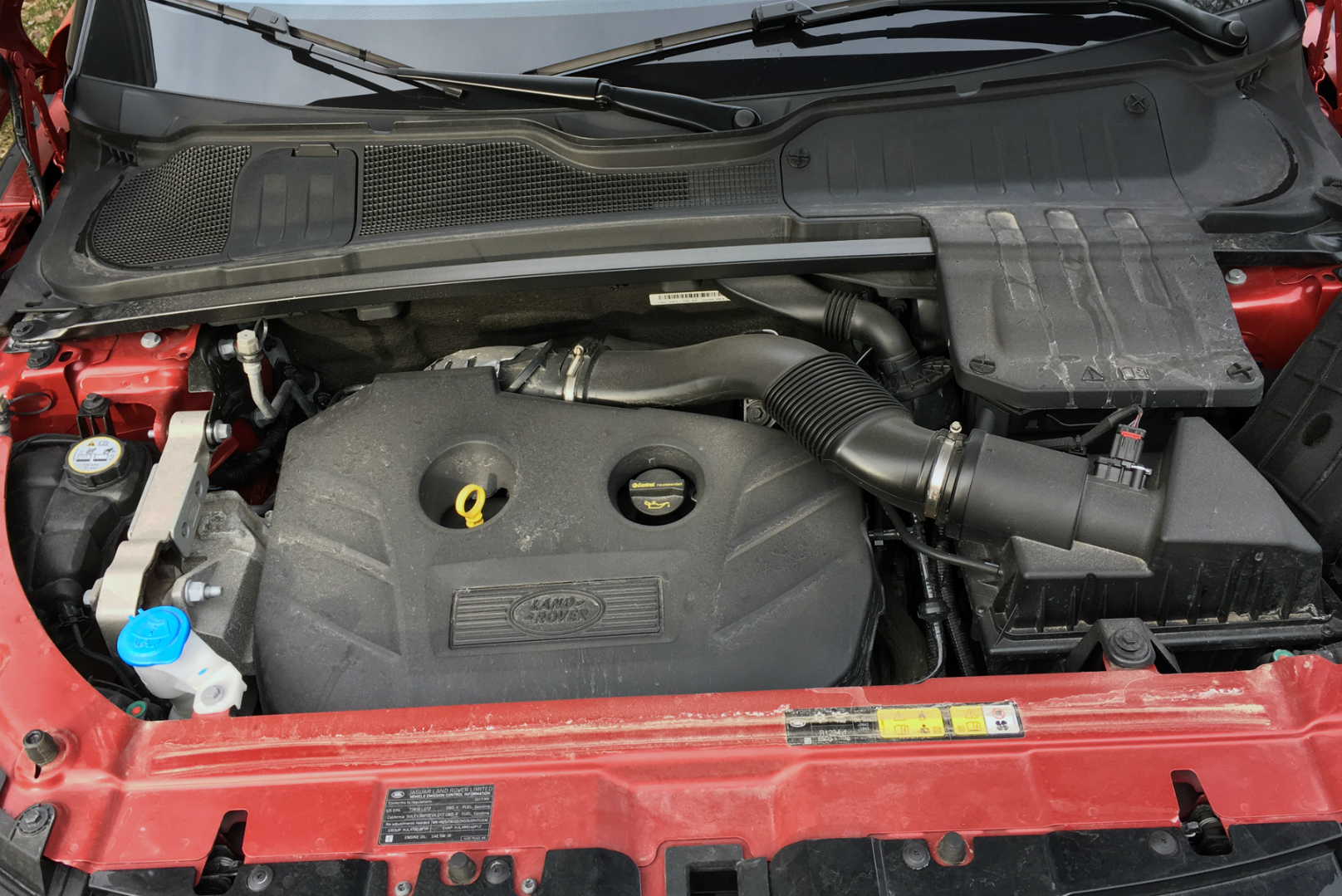 The handling is crisp and refined and becomes a lot of fun when manually changing gears with the steering wheel mounted paddles.

It seems to cling to the road especially going into corners. The body stays flat and controlled even at speed with very little noticeable body roll. The optional $1,000 Adaptive Dynamics – magnetically adaptive dampers – played a big part in this. 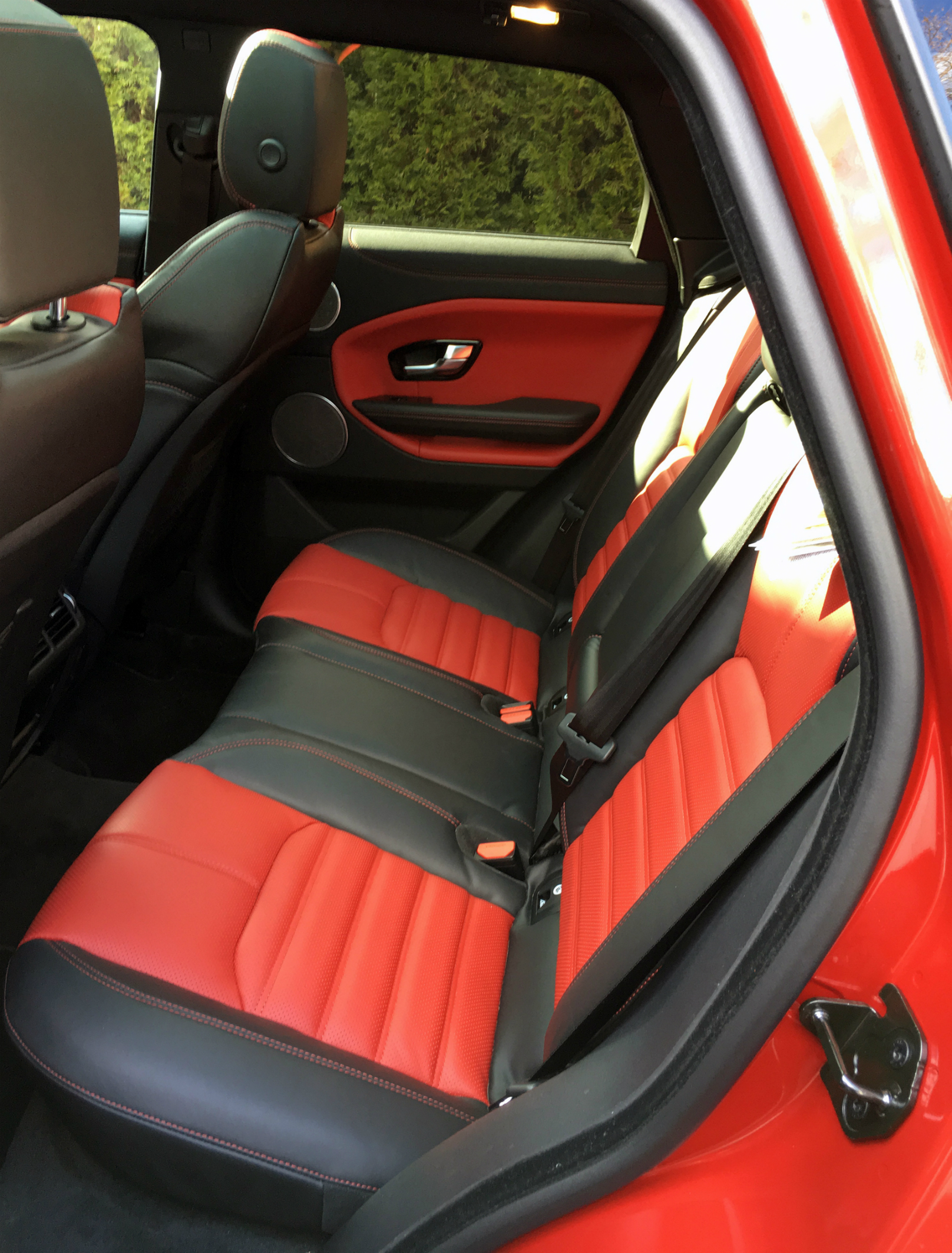 The cabin is well insulated and the ride is quiet and refined at highway speeds – as you would expect from any Range Rover.

The InControl Touch Pro infotainment system is controlled through the 10-inch screen that is controlled like any smartphone, with swipe and pinch gestures being recognised to enable easy navigation through the apps and controls. 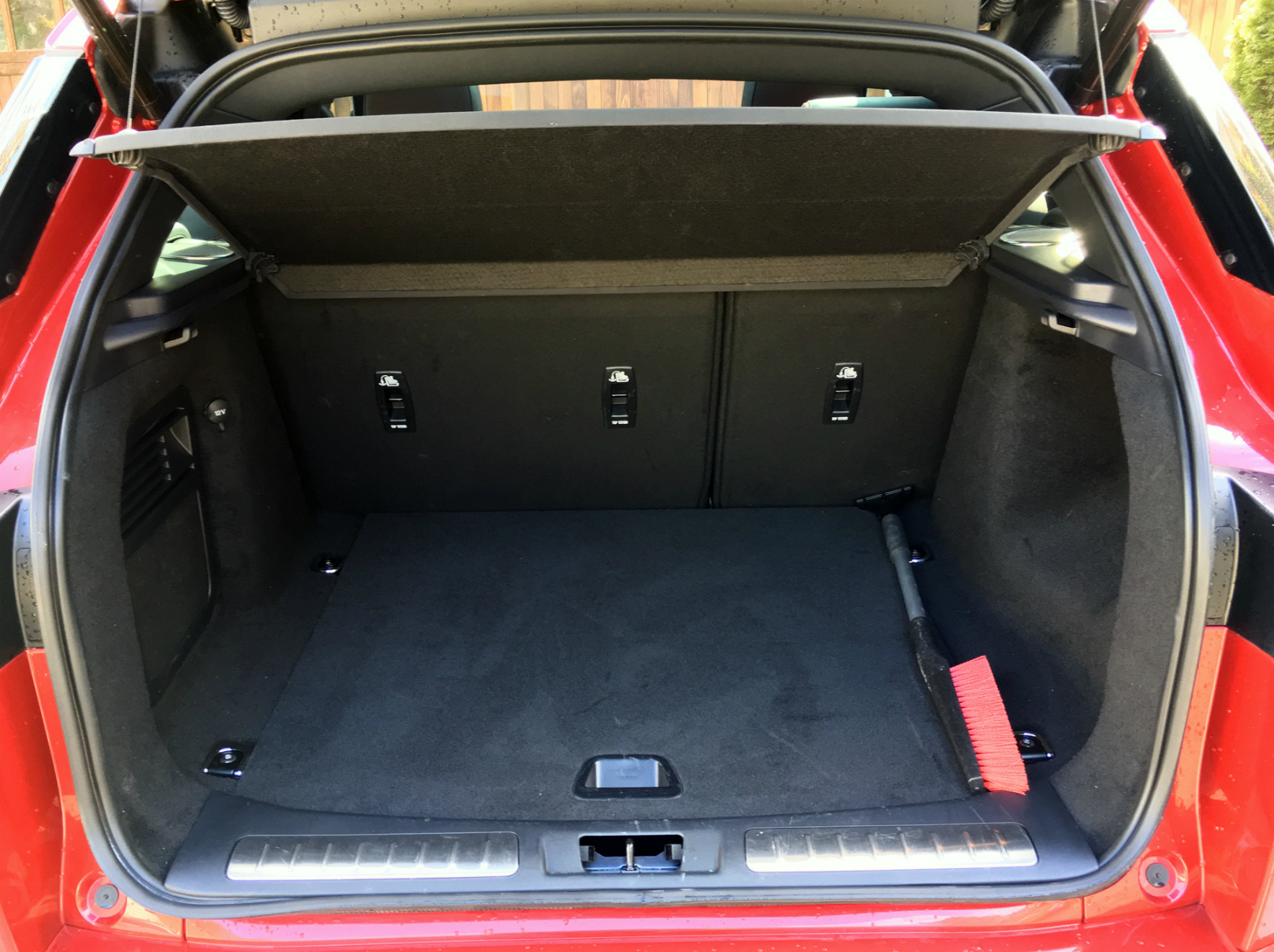 To further enhance the system there is a subscription service that includes a WI-FI hotspot and data connection that enables real time traffic updates street level imagery and online searches.

This Evoque, while smaller than the rest of the lineup, still lives up to the opulence expected of the brand.

But it has taken a cheeky and fresh approach to prove that luxury doesn’t have to be all stuffy and starched. 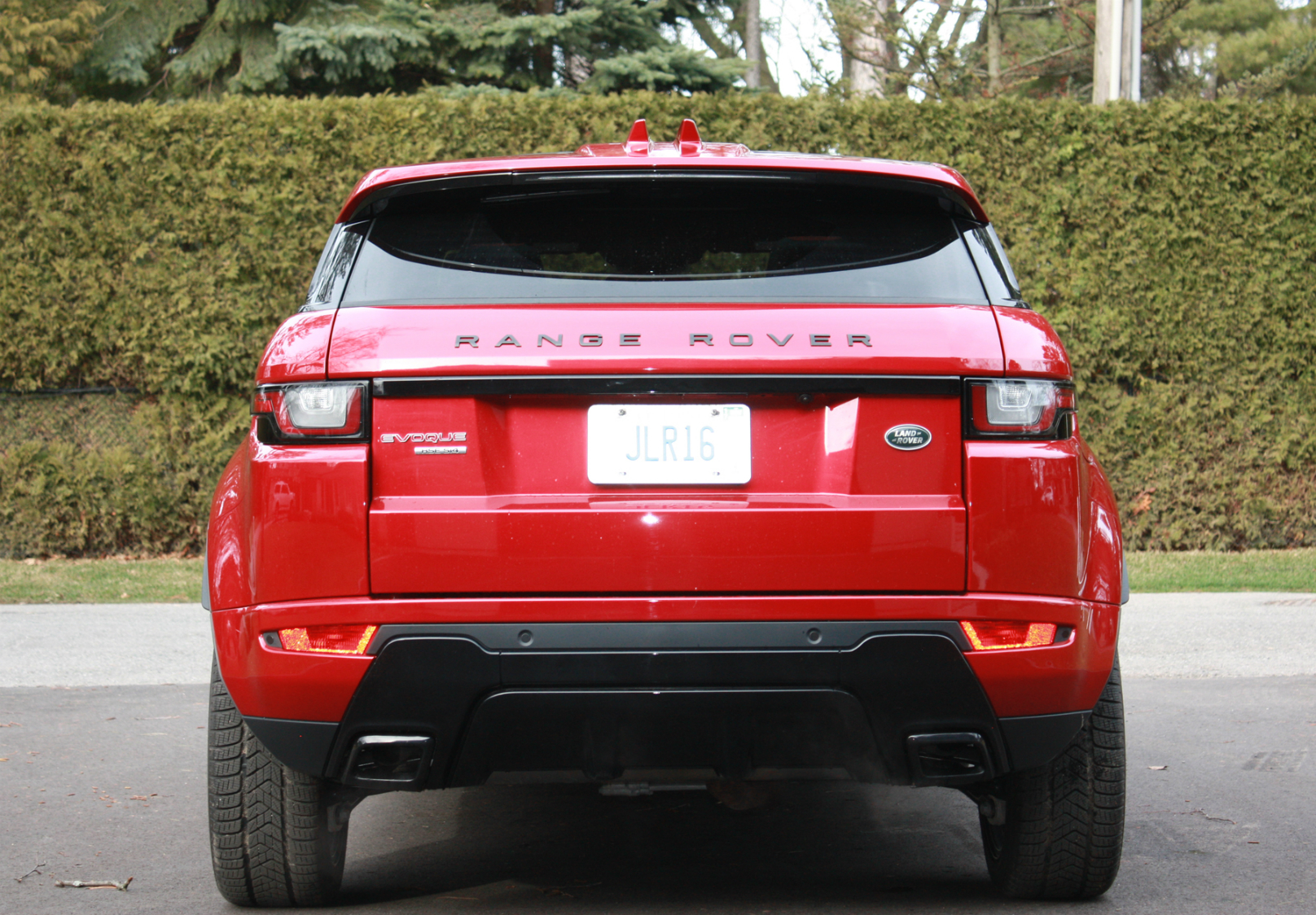